Weather, it’s actually a scary thing to think of for your wedding day. And for Valerie and Simon’s wedding day at Temple’s Sugar Bush, they were calling for 30mm of rain. We chatted about it during our pre-wedding chat (the stress was real) and figured we could only do our best with what’s given to us. Fast forward to their wedding day, here’s how it went.

It was drizzling that morning but by the time I arrived at Temple’s, it had pretty much stopped to my delight as the majority of the days festivities were to be held outside. Simon and his guys were getting ready in the little log cabin and they were enjoying their time with a few beers and some rye. I loved the vibes they had going on, including the little Remote control Zamboni-Cooler. Simon was smiling, and he seemed super hyped for the day so we started their prep immediately once I arrived. As we walked out to start portraits before the ladies arrived, we noticed one of Simon’s groomsmen (Valerie’s brother) had a different coloured suit… Oh no, the store had messed up his and his dad’s suit order essentially reversing them. So he ran over to find him and they ended up switching suits right there on the fly. Luckily, they weren’t too different in size and I don’t think anyone noticed. 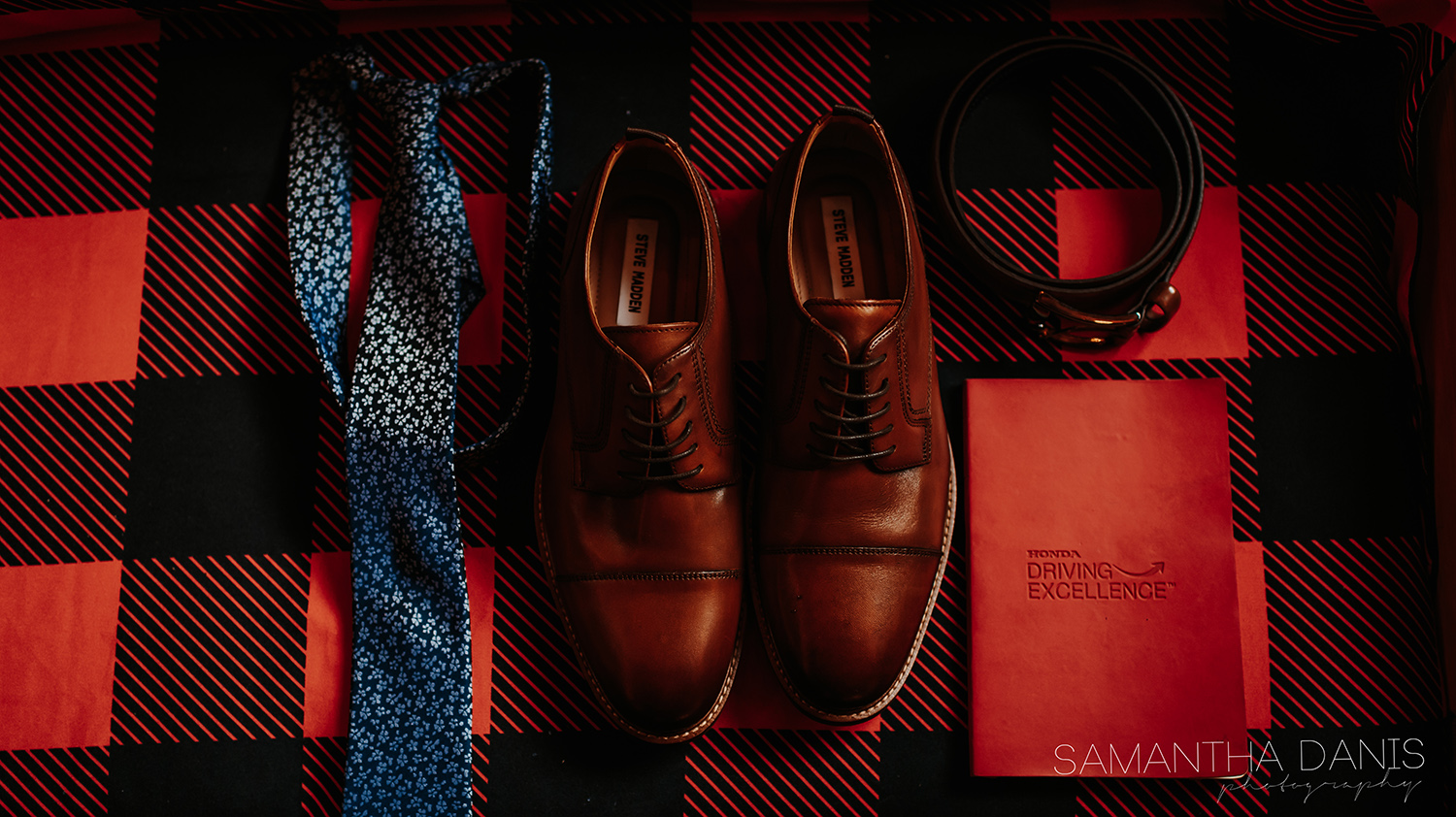 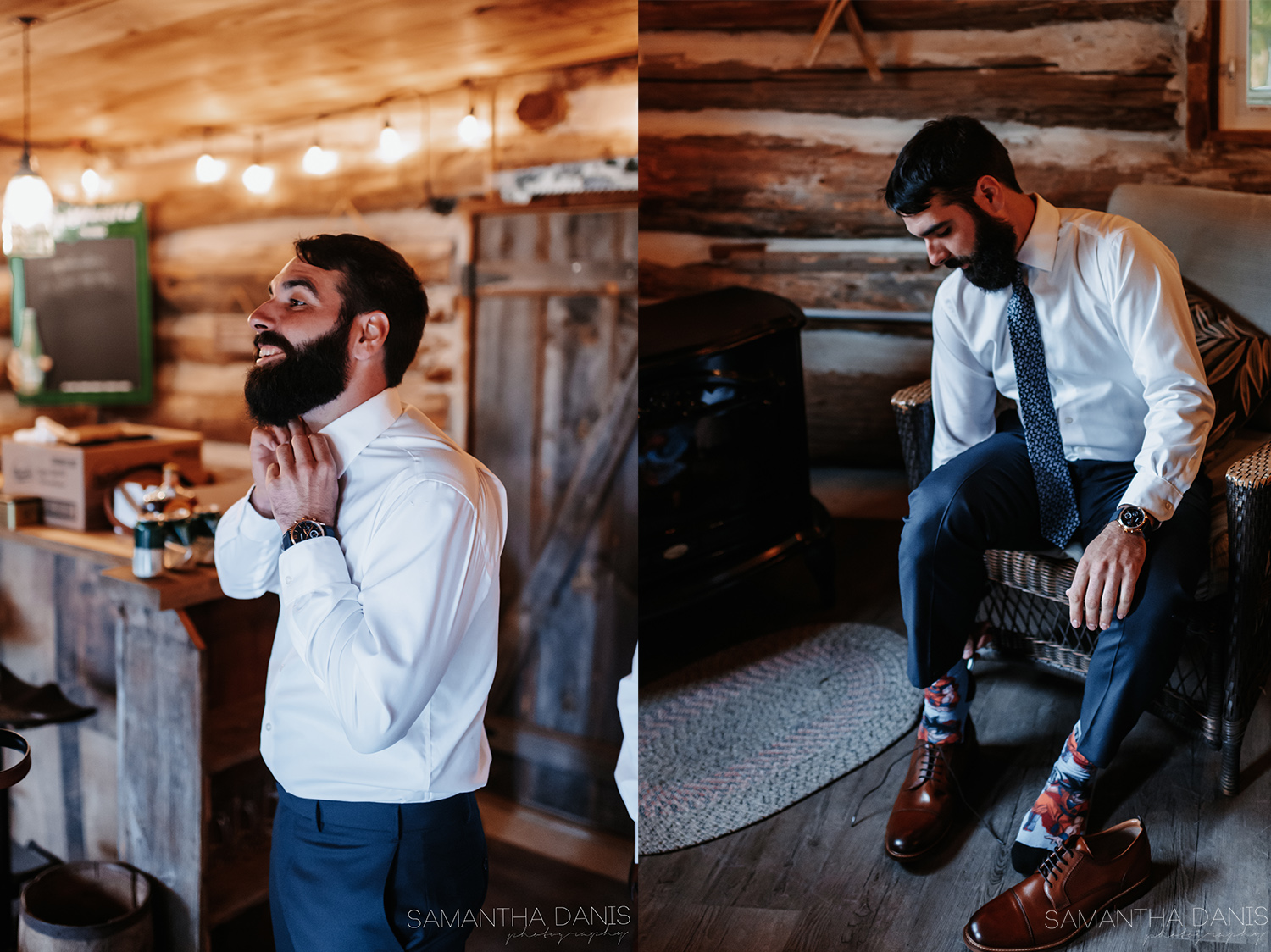 My favourite part about the guy photos had to be these two moments: 1- When I asked them to do the Flying V, they caught onto the reference right away and got straight into formation. Not only that, but they did an actual hockey pose like as if they were in The Mighty Ducks lol. 2- When they showed me all their different novelty socks and I was able to name every single character or where they were from. The boys were actually amazed I knew all of them but obviously it’s cause I’m a magical unicorn. Once all the shenanigans were over, I made my way over to Valerie who was hiding with her girls in the ‘’getting ready’’ room at Temple’s. 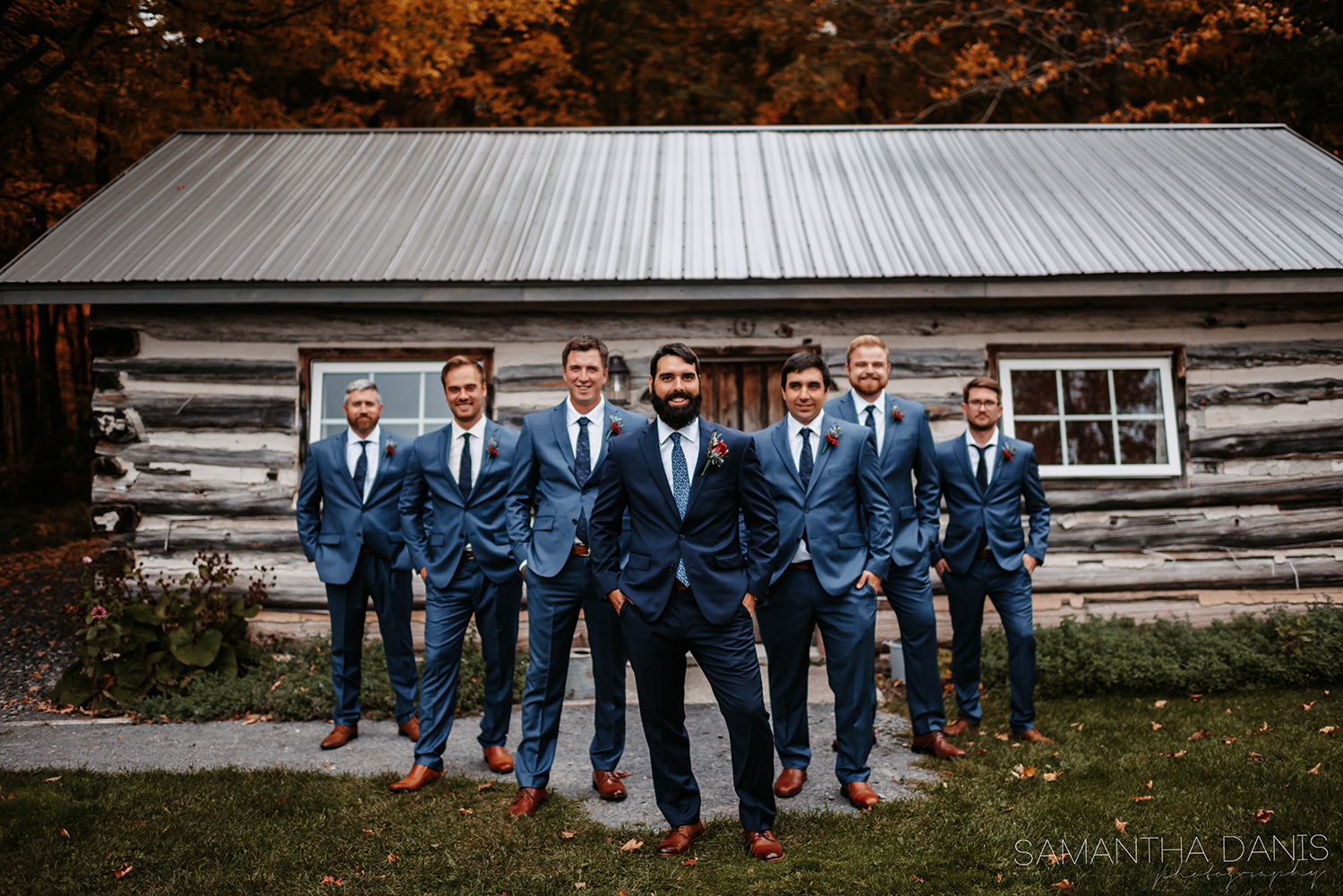 Valerie looked absolutely gorgeous in her red feathered robe as she and the girls enjoyed some champagne and each others company. But time was ticking and we had to get the girls dressed because they hadn’t seen Valerie’s dress at all yet so we had to do a big reveal. Valerie and her mum had a moment together while she got dressed and me and the videographer even kicked in to attach the mic to her leg. Your vendors wear many hats on your wedding day, just saying. I took a moment to take in what I was seeing, this dress was absolutely phenomenal. Valerie had told me she’d extended the train but my brain was not prepared for what I saw. After a touch up of her red lipstick, it was time to walk her out to her ladies as the guests got seated for the ceremony. First I’d like to say, this wedding had subtle nods to Star Wars, including the bridesmaids bouquets which had lightsabers for handles (look closely, it’s pretty neat). Second, I will remind you all that rain and overcast on your wedding day ESPECIALLY in the fall is a beautiful thing. It really makes the colours around pop. Now back to our story.

I placed Valerie and her train while the girls waited impatiently to open their eyes, and boy were they ever surprised when they opened them. There was lots of smiles and probably even more tears as they took in the drama and beauty that stood before them. After some Kleenex, hugs and portraits it was time to get the ceremony started.

The ceremony was held in the woods at Temple’s to give it a fall whimsy and it was so beautiful with the leaves falling from the trees as the processional made it’s way in. Simon walked with his dad by his side and his mom. And the wedding walked in arm in arm with their matching opposing person which I don’t get to see often honestly so it was a cool change. And then came Val. Simon was turned away until she made her way closer to which he turned around and just burst into tears. I mean, he held it together really well but his eyes told me a million things and Valerie’s smile said a million more. They reached for each other and the world vanished around them. 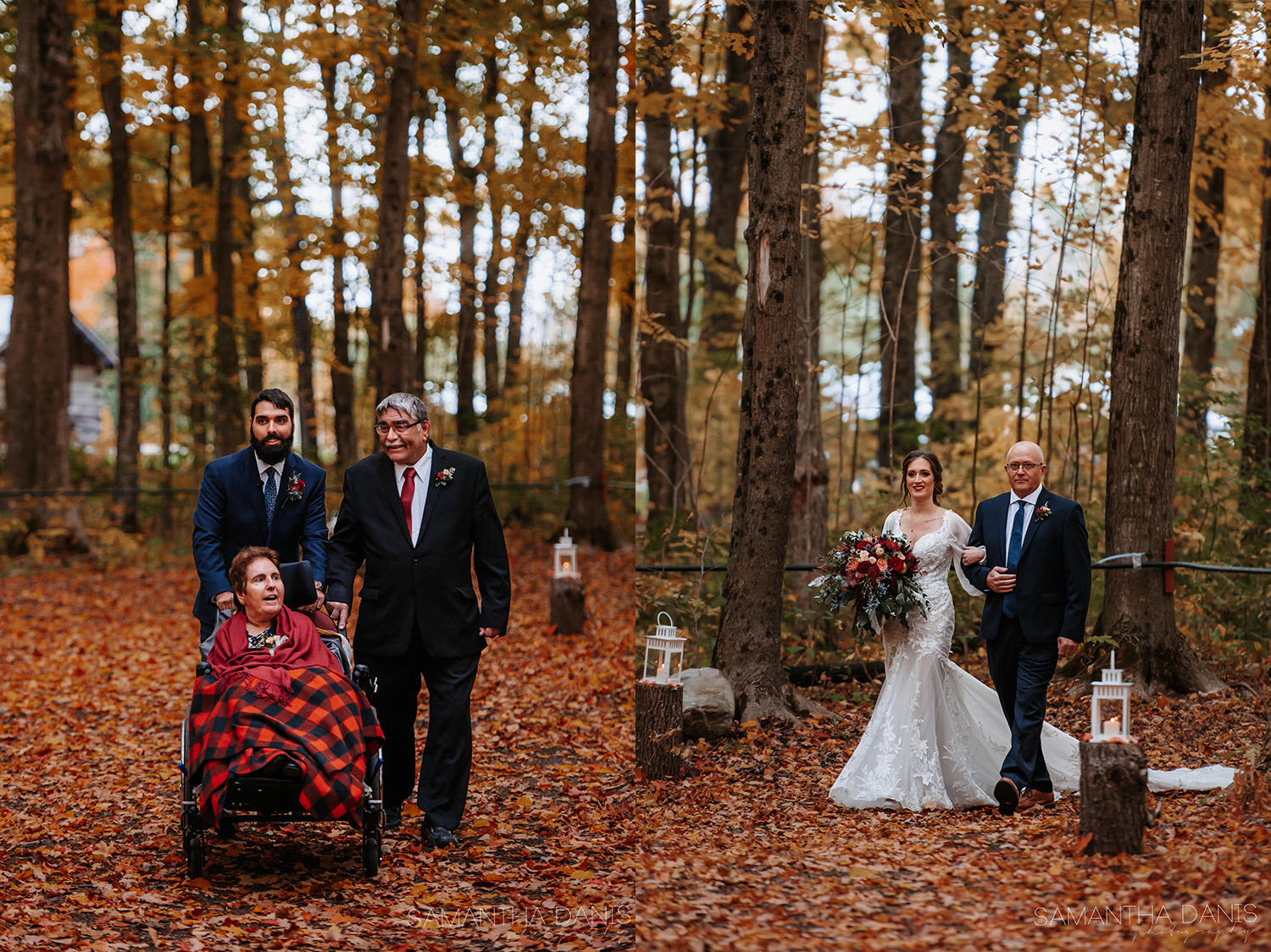 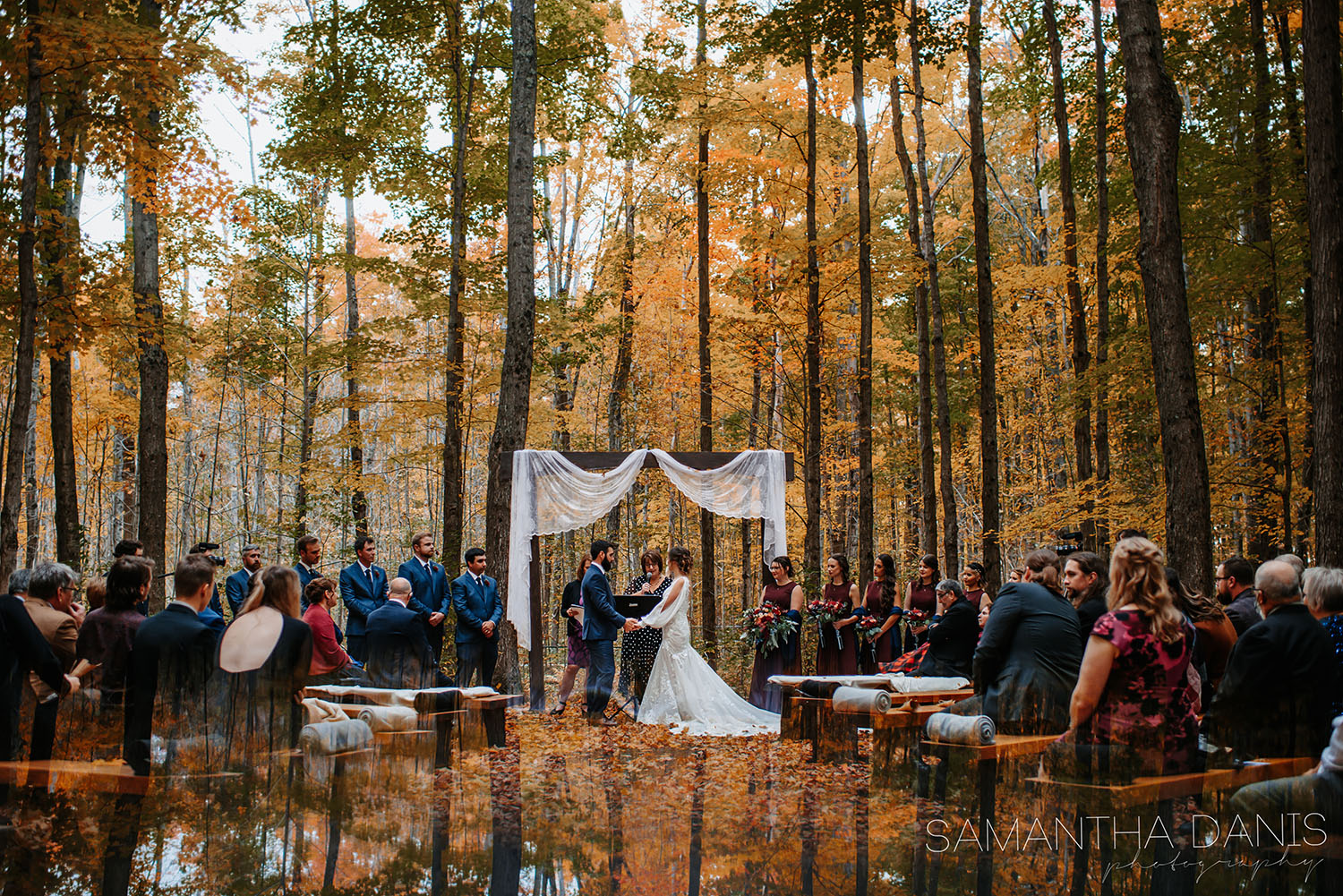 The ceremony was beautiful of course. They had Valerie’s aunt Officiate in French while the legal officiant repeated in English. Valerie and Simon’s vows were both personal, full of love and full of so much joy. The promises to each other and Valerie’s re-telling of their love story was very beautiful to hear and I got lost in the moment with them. Their tripod dog, Paco even wanted in on the love so he nuzzled his way closer to them until he was between their feet. It was pretty darn cute.

After a beautiful lighting of the unity candles done by both of their dads and then themselves, they’d official been named Husband and Wife and had their magical first kiss. Their guests cheered as they walked down the tree covered aisle dancing and cheering and just reviling in the love. 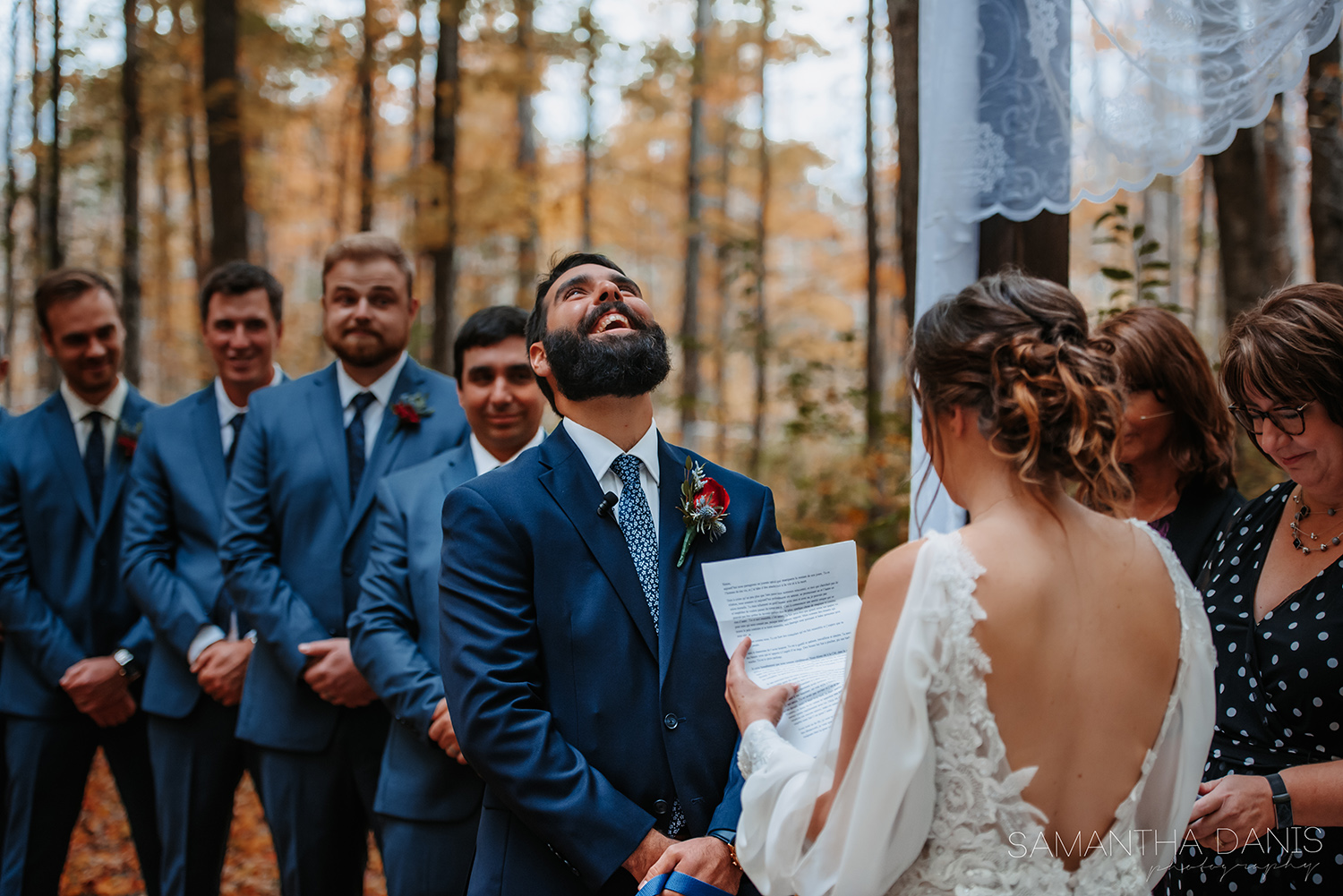 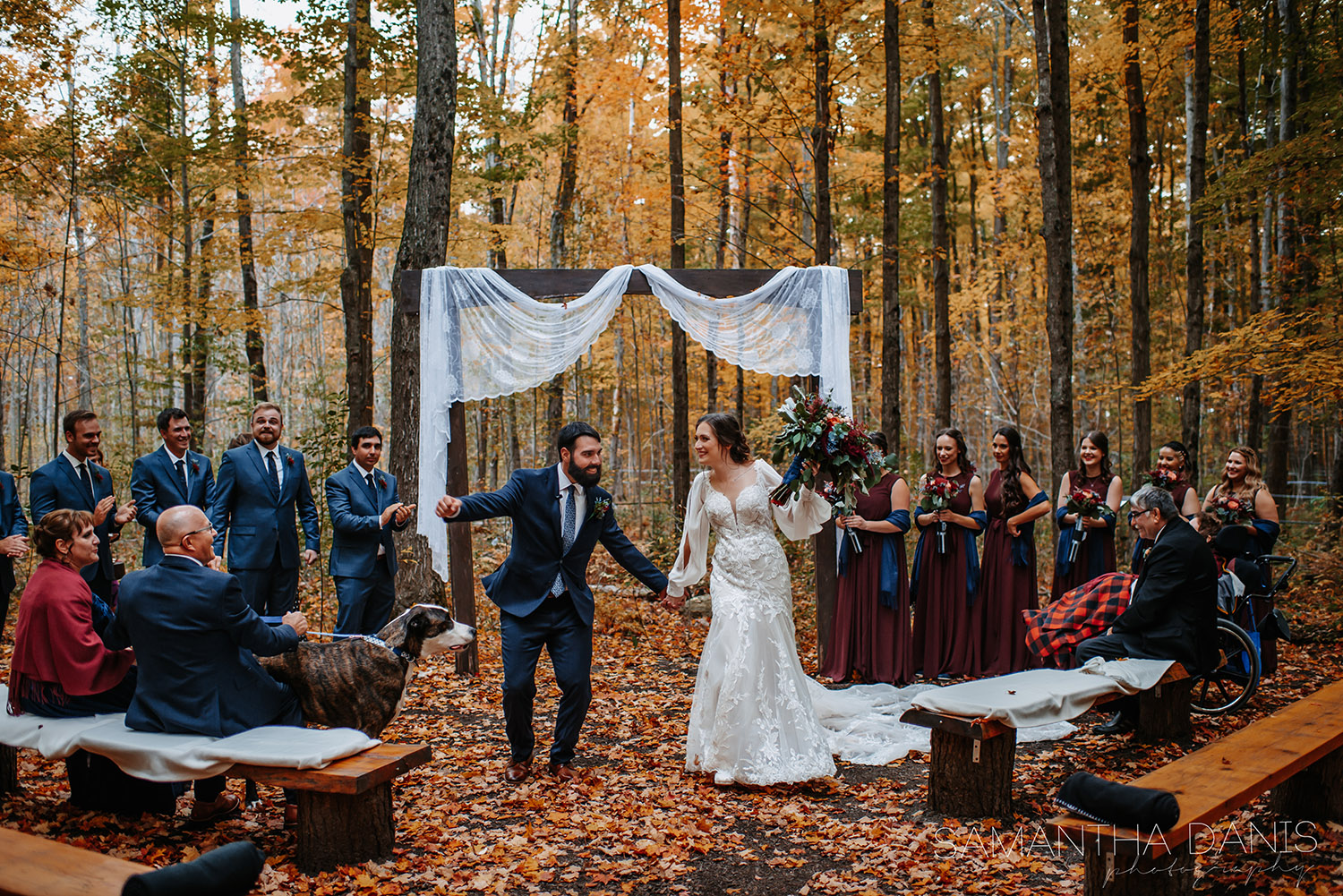 Between the end of the ceremony and the reception is typically our portrait time which is fairly common for most weddings. So we wandered into the garden area and proceed to do exactly that. Taking our time and enjoying the moment and the beautiful scenery around us. But as time for portraits started to end, we actually had to make our way down the road for special portraits Valerie had requested. Cows. The girl loves cows and she ask the venue to scope out a field with cows for some photos and Temple’s certainly delivered. 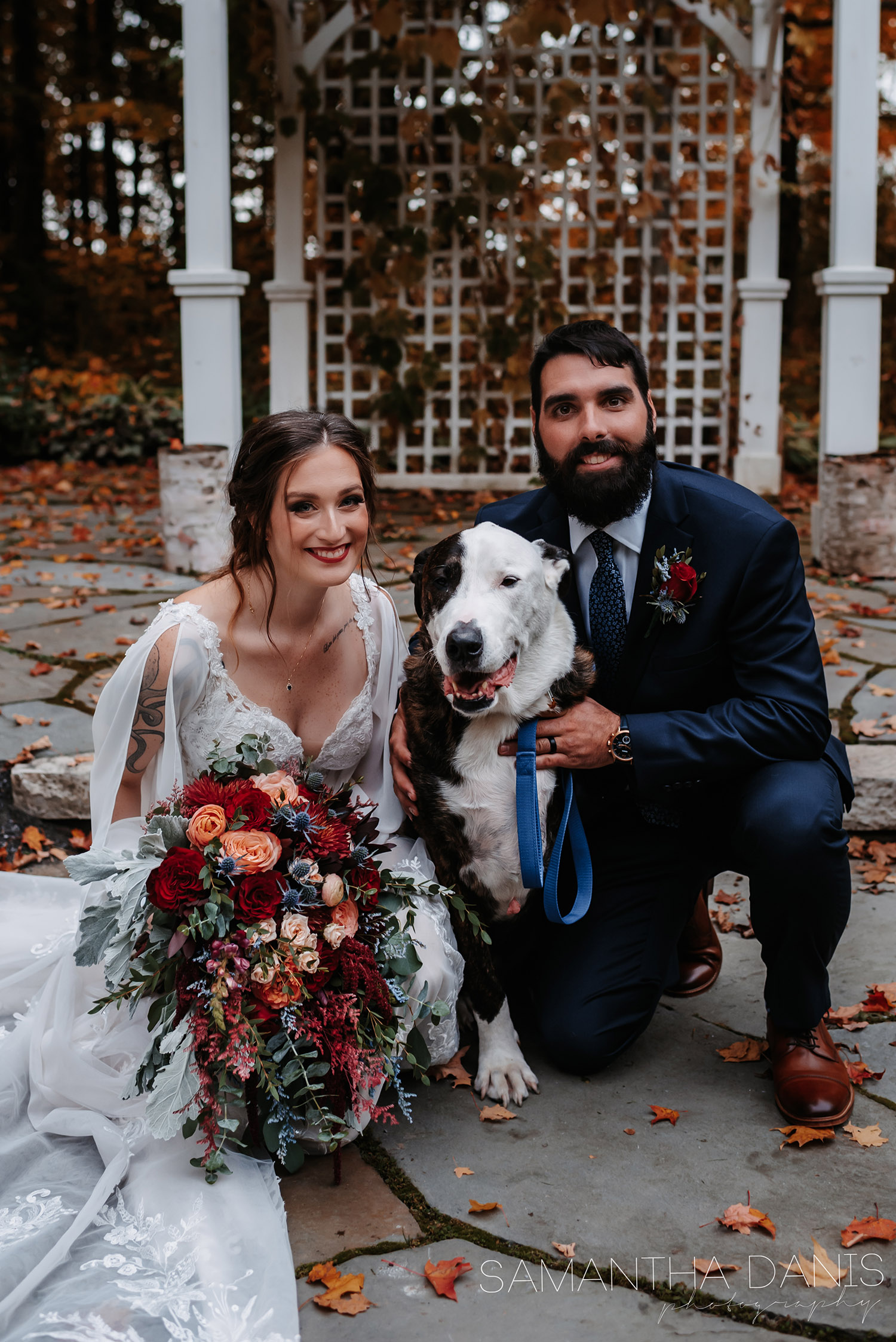 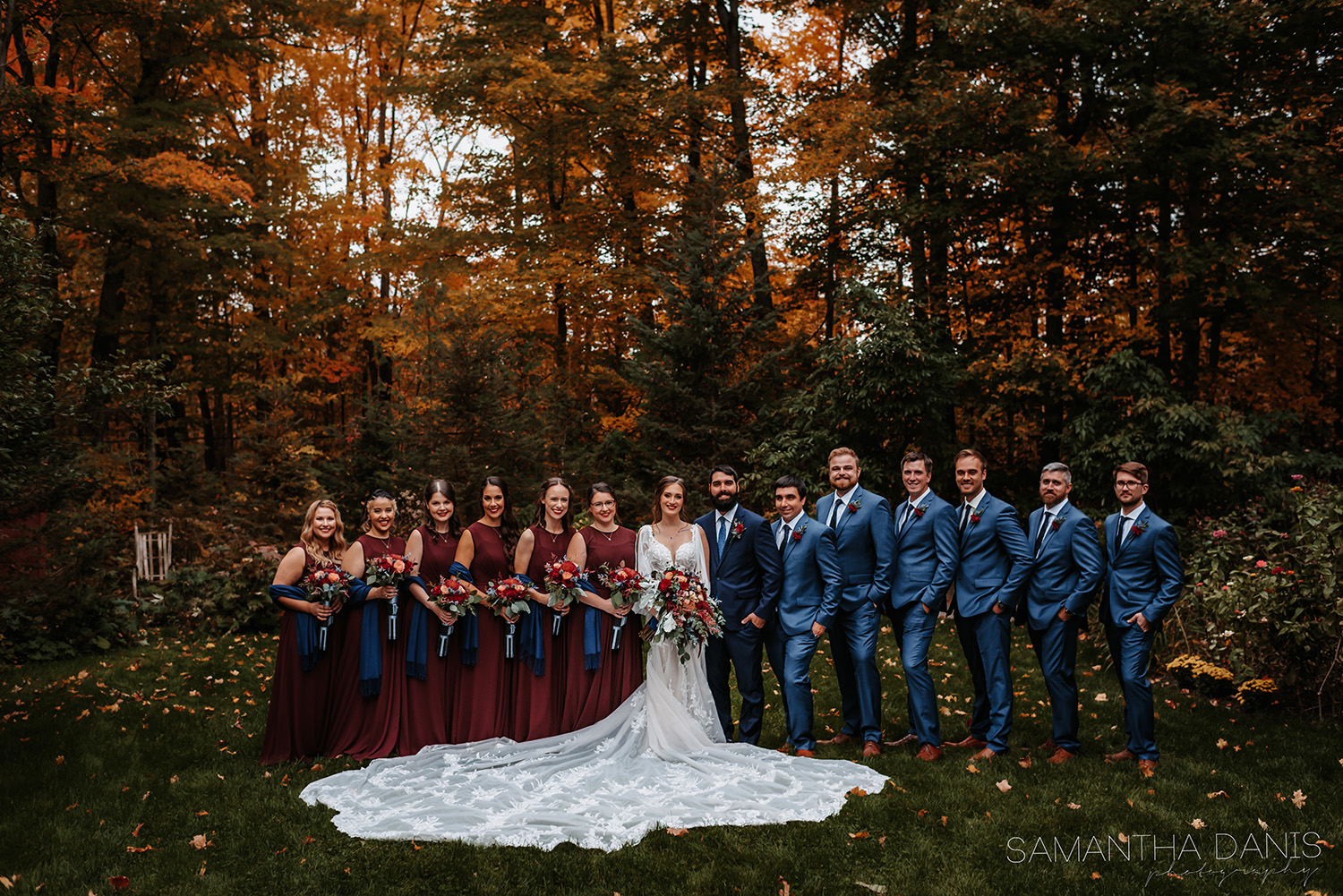 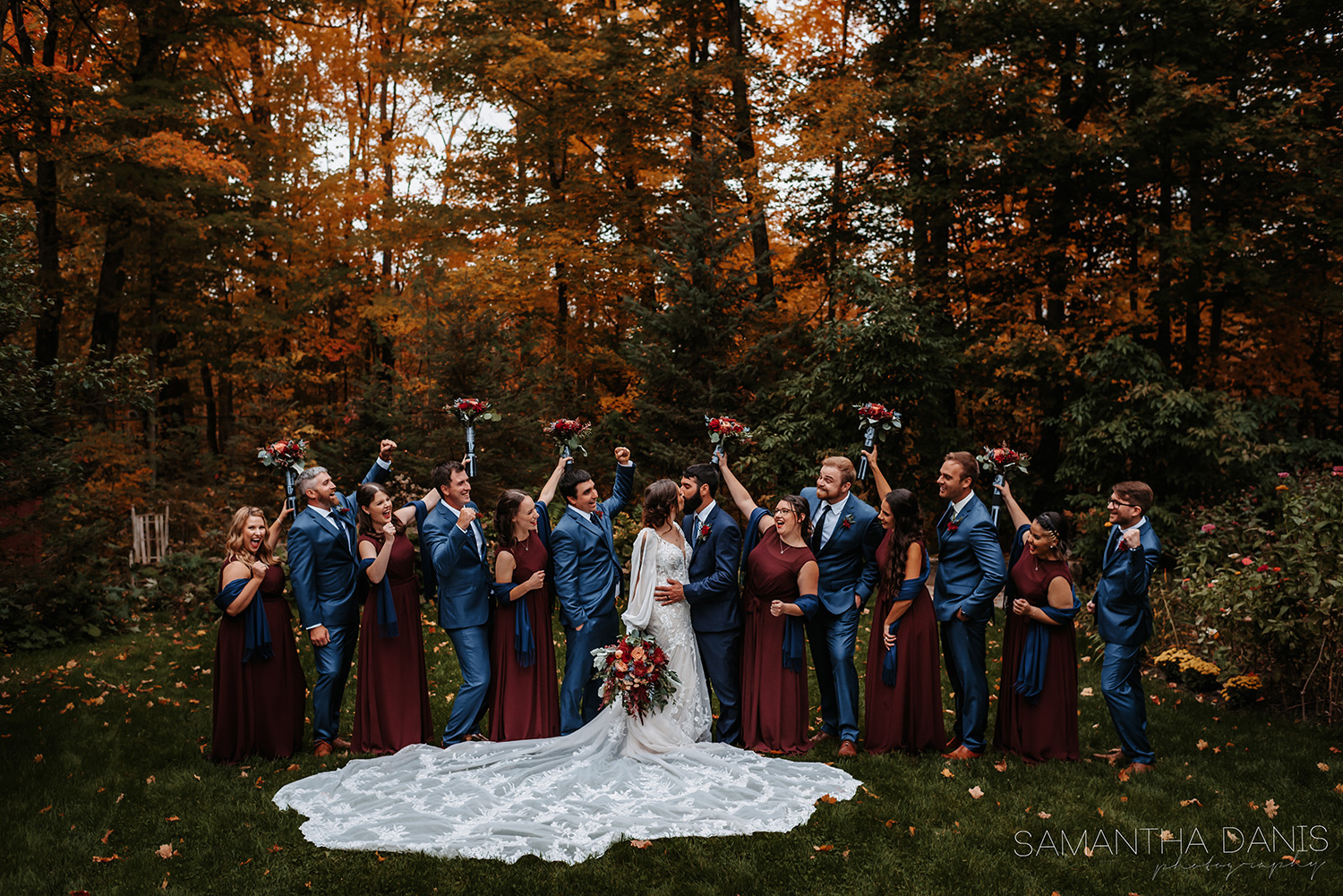 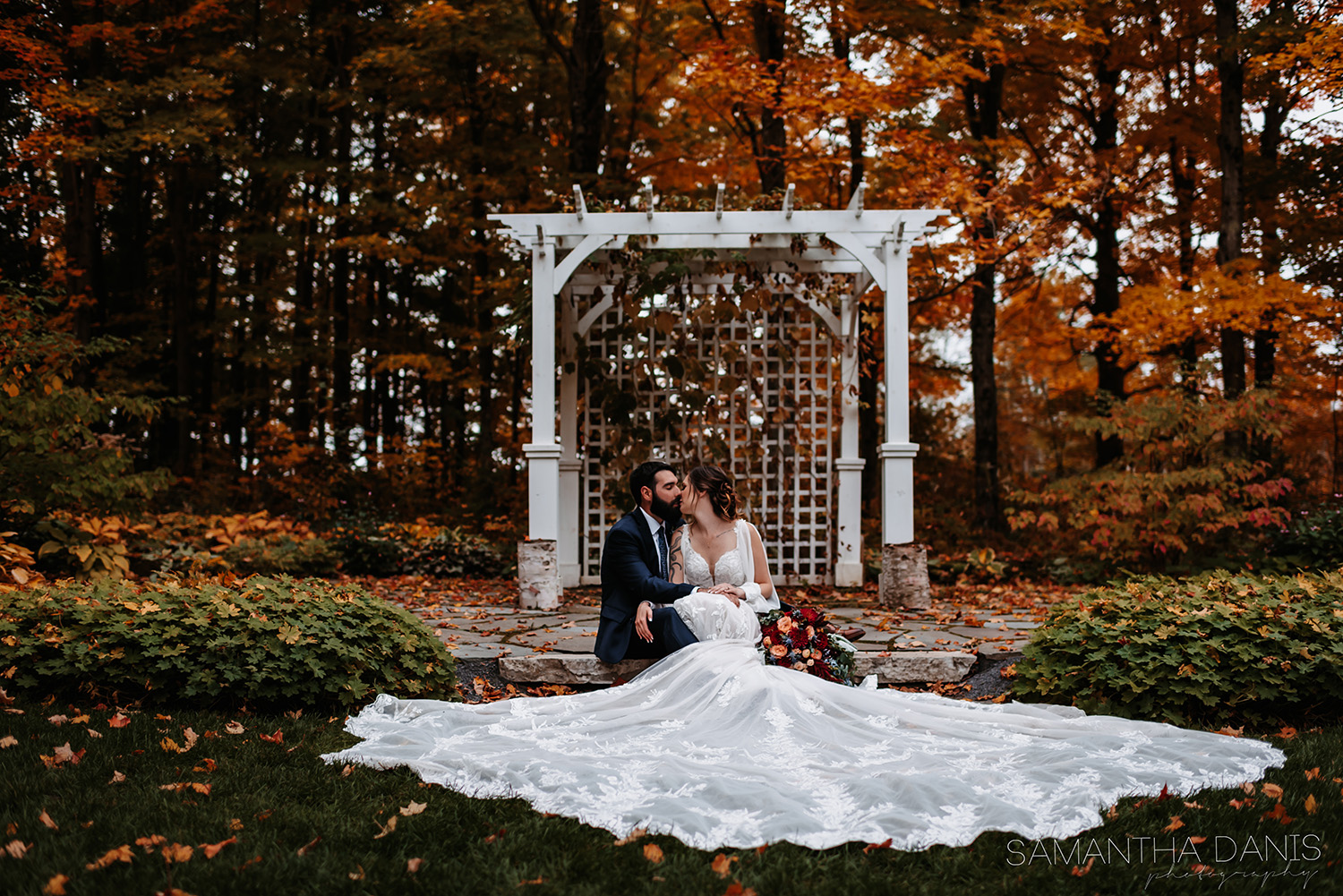 We made our way to a farm and made our way in. The cows were mostly curious but afraid and kept their distance. Which is probably a good thing because Simon was definitely not sure about all of it. However, Val was in heaven and she literally just stood there for a moment and stared at the cows with a big smile on her face. Her dreams were a reality. After a few more photos with the moo moos and some champagne, we were back off to Temple’s Sugar Bush for the dinner (and we snuck a few more photos because why not). 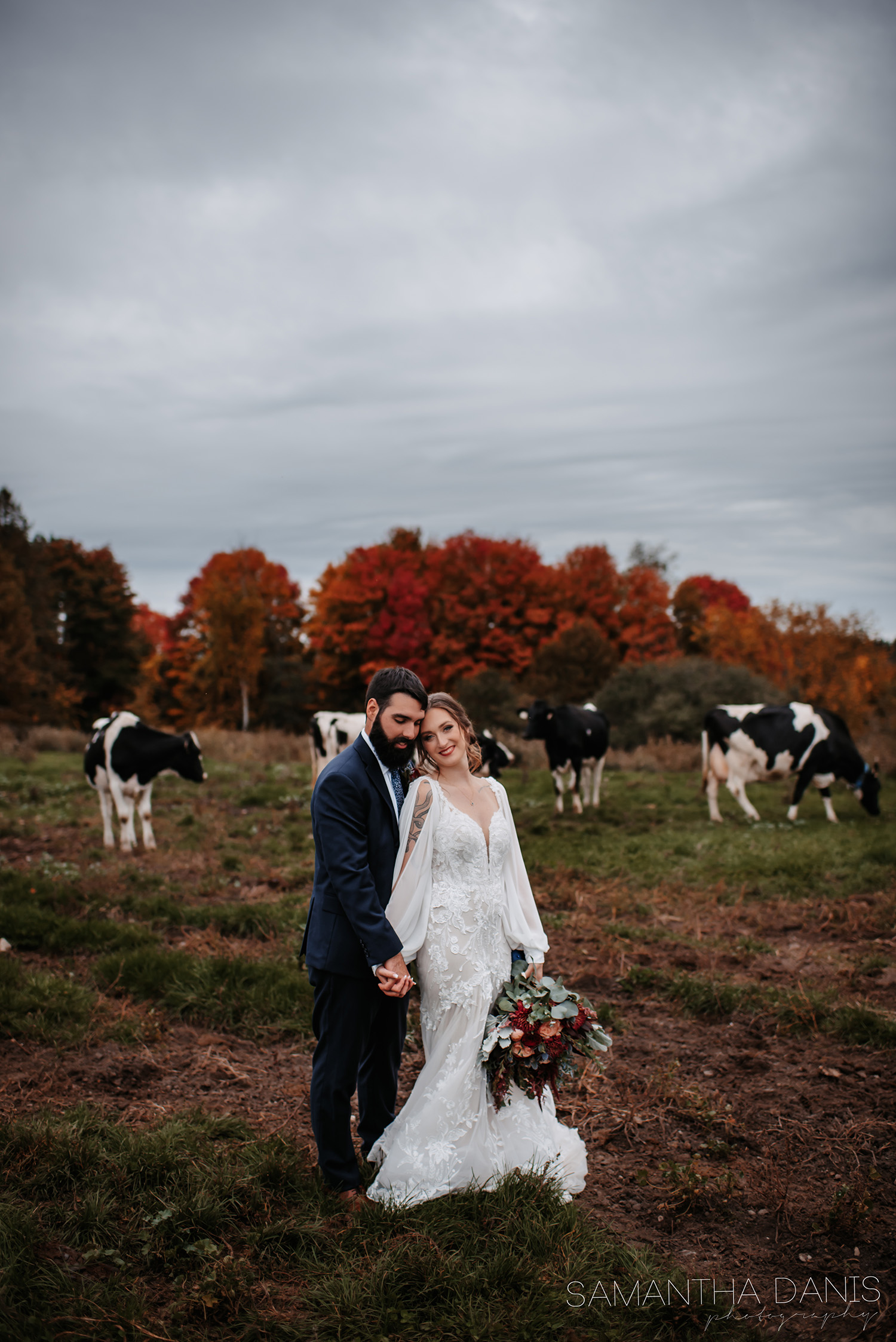 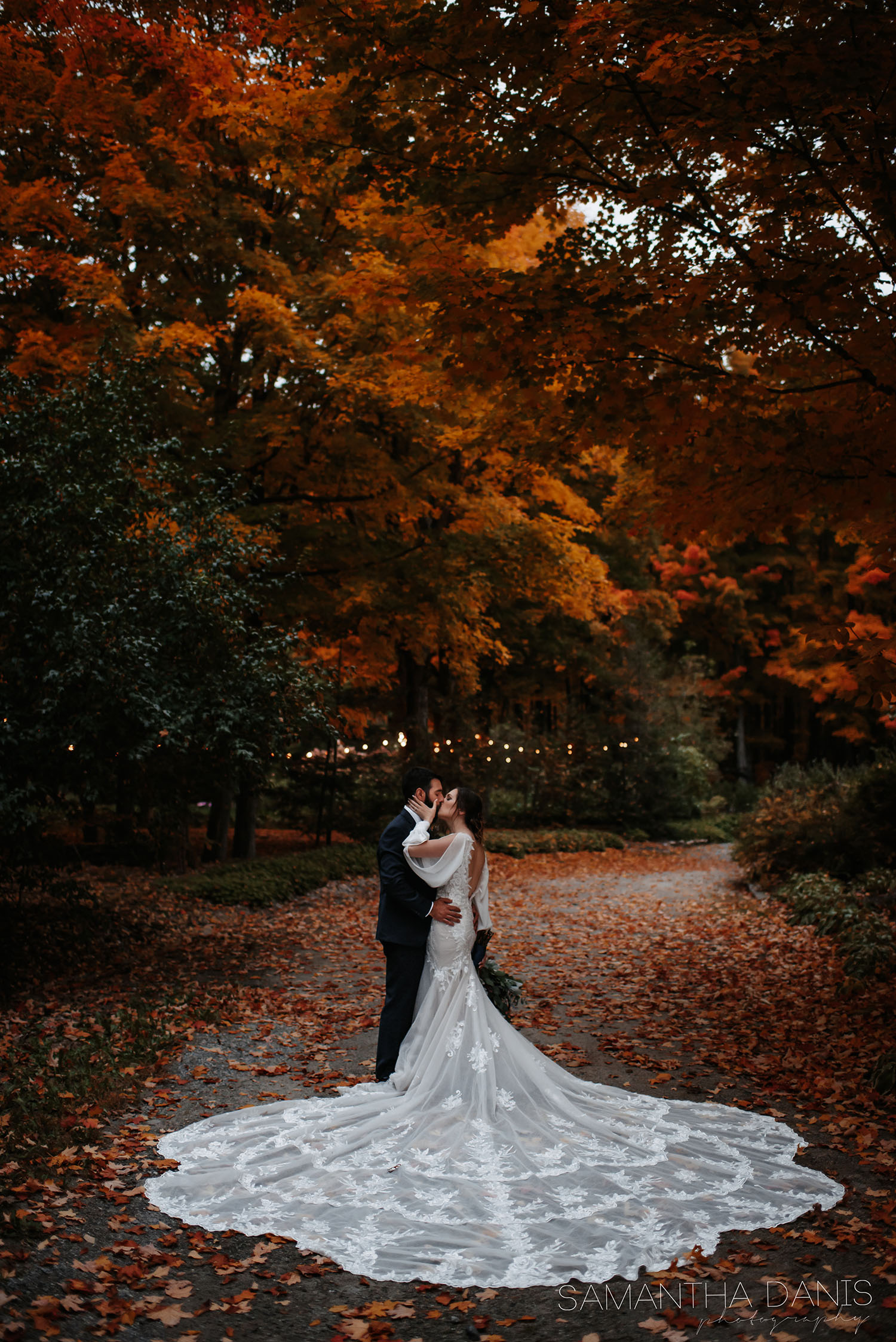 The reception was beautiful, and the details were fab! Touches of navy and maroon drizzled the room with a beautiful and simple cake. My favourite, once again was the Star Wars touches in their Guest Book. It was a wooden Millennium Falcon and little wooden R2D2’s that people would sign and insert in the ship. SUCH A COOL IDEA and so cute at that. 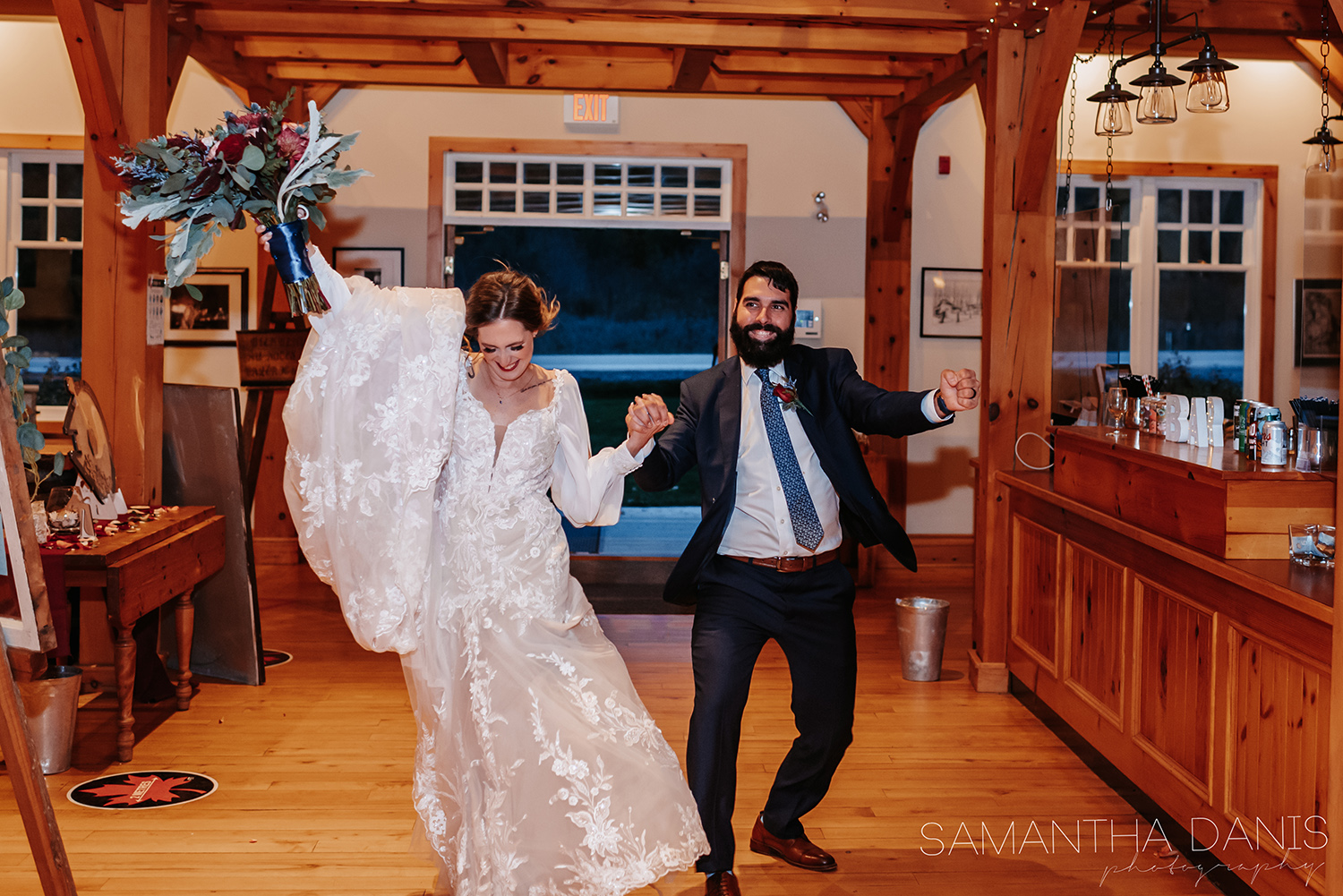 The evening was filled with A LOT of laughter. I don’t think a single person didn’t smile or laugh that whole time. The speeches were good, mostly short and sweet but the parent speeches always seem to get everyone in tears and this night was no different. The guests also had to sing a love song to get Valerie and Simon to kiss and there was a lot of those haha. The guests were not shy this time around and there was singing to be had all night. 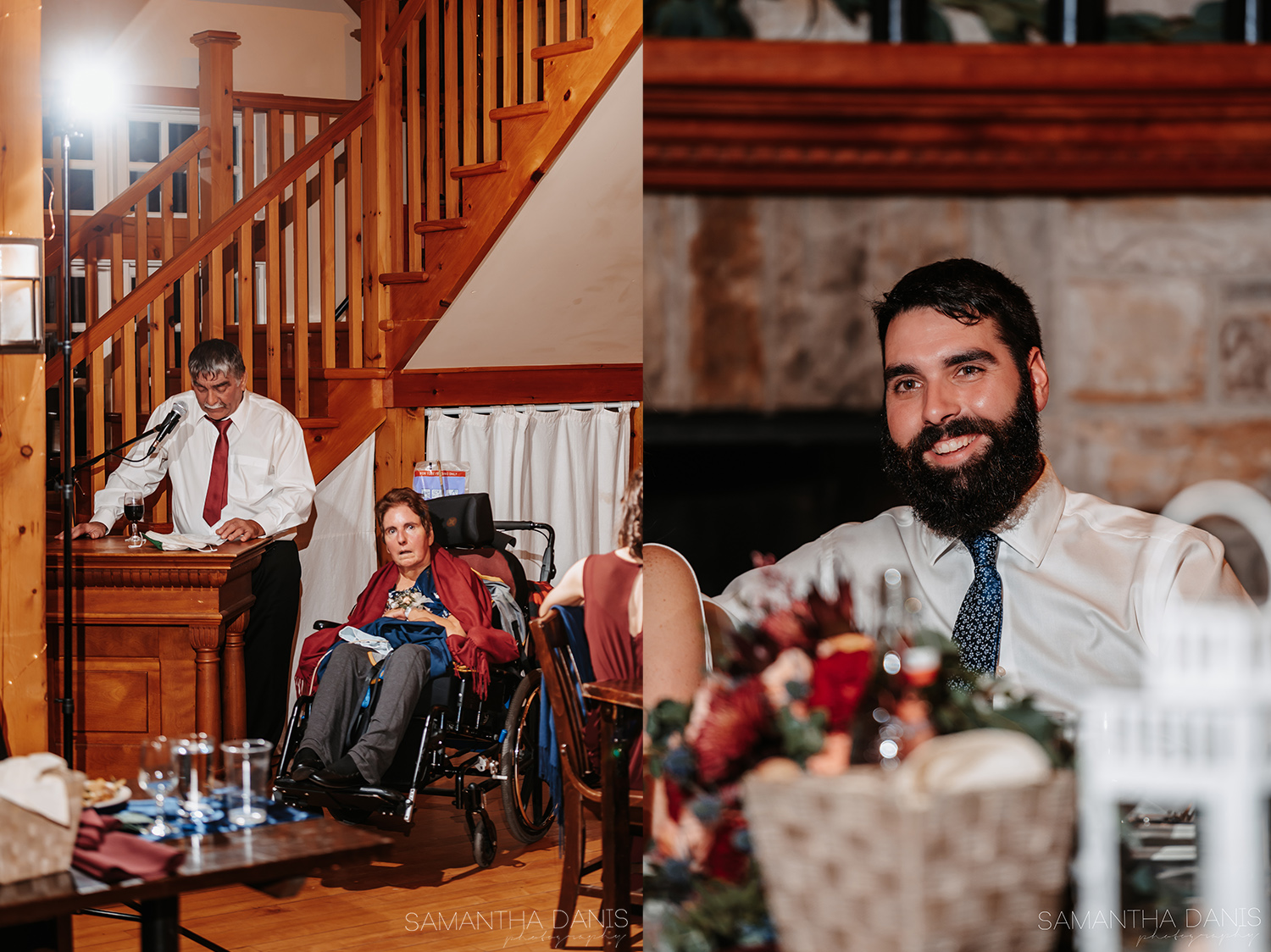 The first dances were also very beautiful and emotional but the shining moment for me was Simon and his mum’s dance. Simon’s mum, Suzette is in a wheelchair but Simon didn’t let that stop him. He took his mom and danced away with her to Dancing Queen by ABBA. He twirled her on the dance floor and just had a blast. Her smile was beautiful and you could tell that she was enjoying the moment. He then surprised his sister (who was already crying by this point) and took her in his arms to dance with her as well while Val stayed with Suzette to watch. It was honestly such a beautiful and touching moment. Lots of tears at this point too. 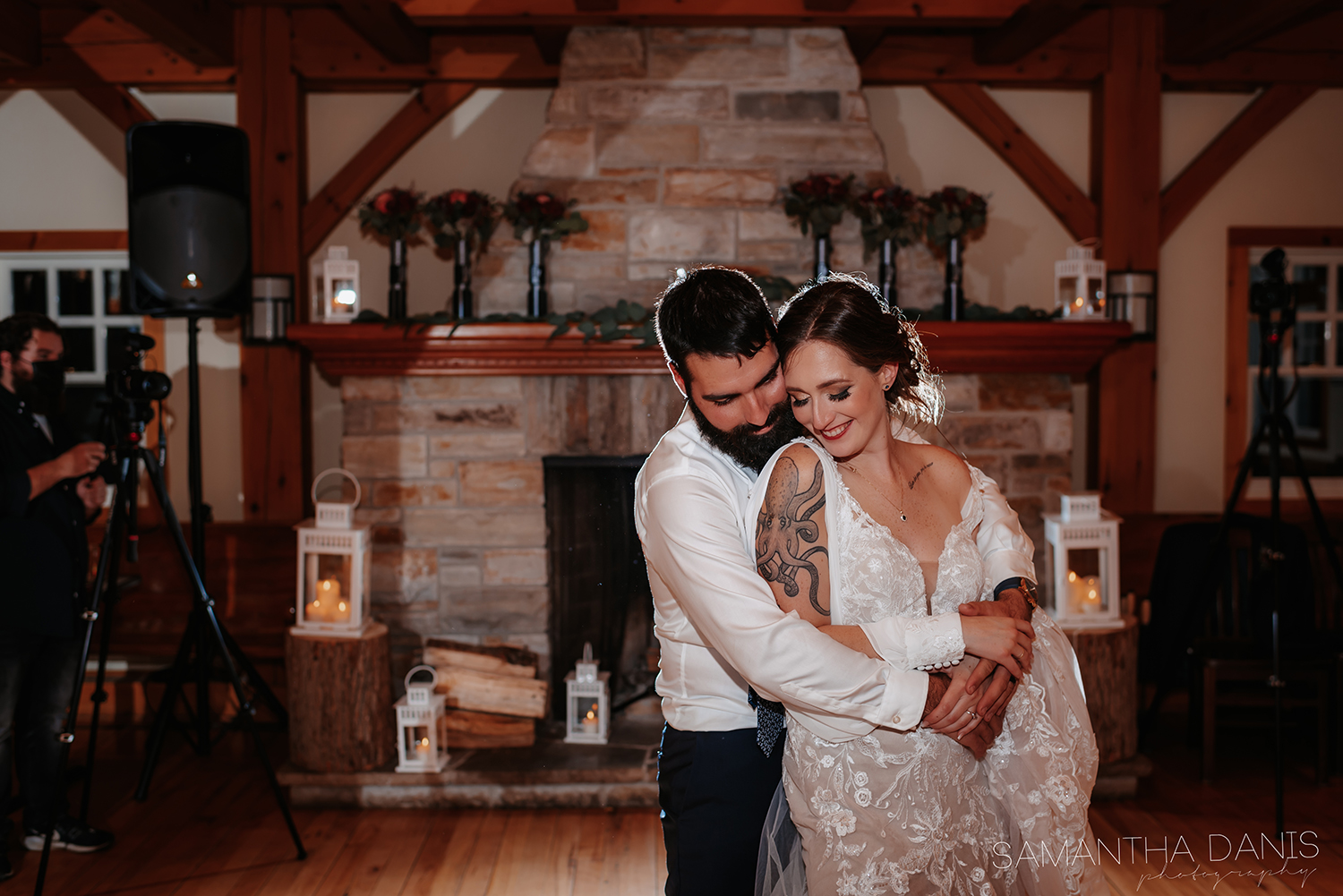 Valerie had one last surprise for her new husband before they left Temple’s and it has to do with Grease. She hid behind the wall of bridesmaids as the music started and then she jumped out to reveal an outfit change! A super cute tulle skirt with a big ass bow on the back and showing off her supa cute Toms. She made her was over across the dancefloor to Simon who was cheering her on. She danced circles around him as Sandy did to Danny until finally they danced together and their wedding party joined them. We snuck out for just a couple night portraits in the new outfit before we headed off to Valerie and Simon’s property for a night of drinks, food and dancing! 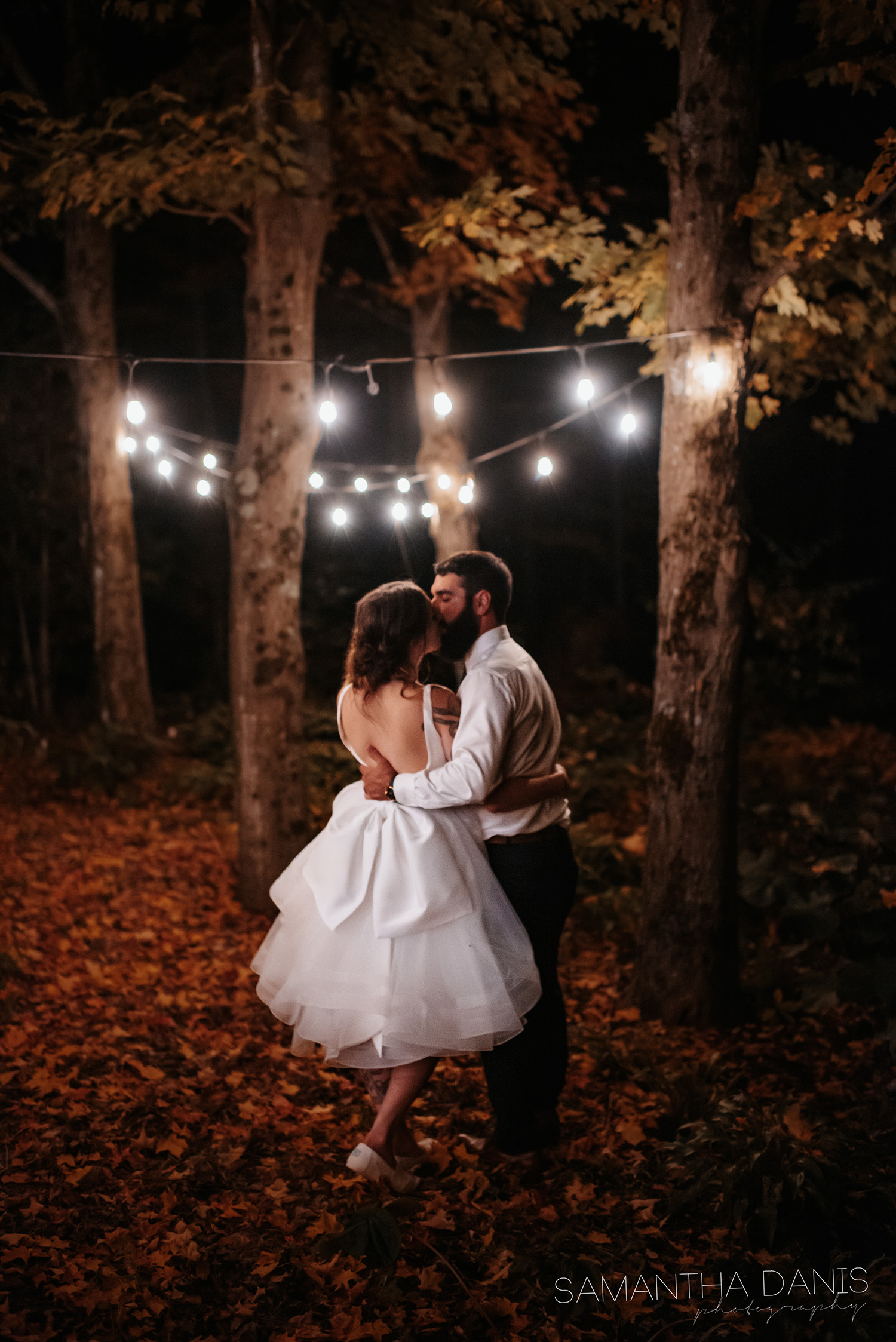 I arrived to their home to find they had put up multiple tents, one with twinkle lights and tables where they ordered late night pizza and snacks. Not to mention a canoe filled with ice and alcohol which was the coolest idea. Simon even built a wooden dance floor under a tent to host the party animals that night. After some jigging of the speakers that were on the struggle bus to work, everything started working perfectly and it was time to get the party started! The night was absolutely AWESOME. I danced my butt off with these party people and had the time of my life. It was like being with old friends which surprisingly enough, I was able to meet one of my old friends again at this wedding and it was just perfect. The whole day was perfect and well worth the wait. 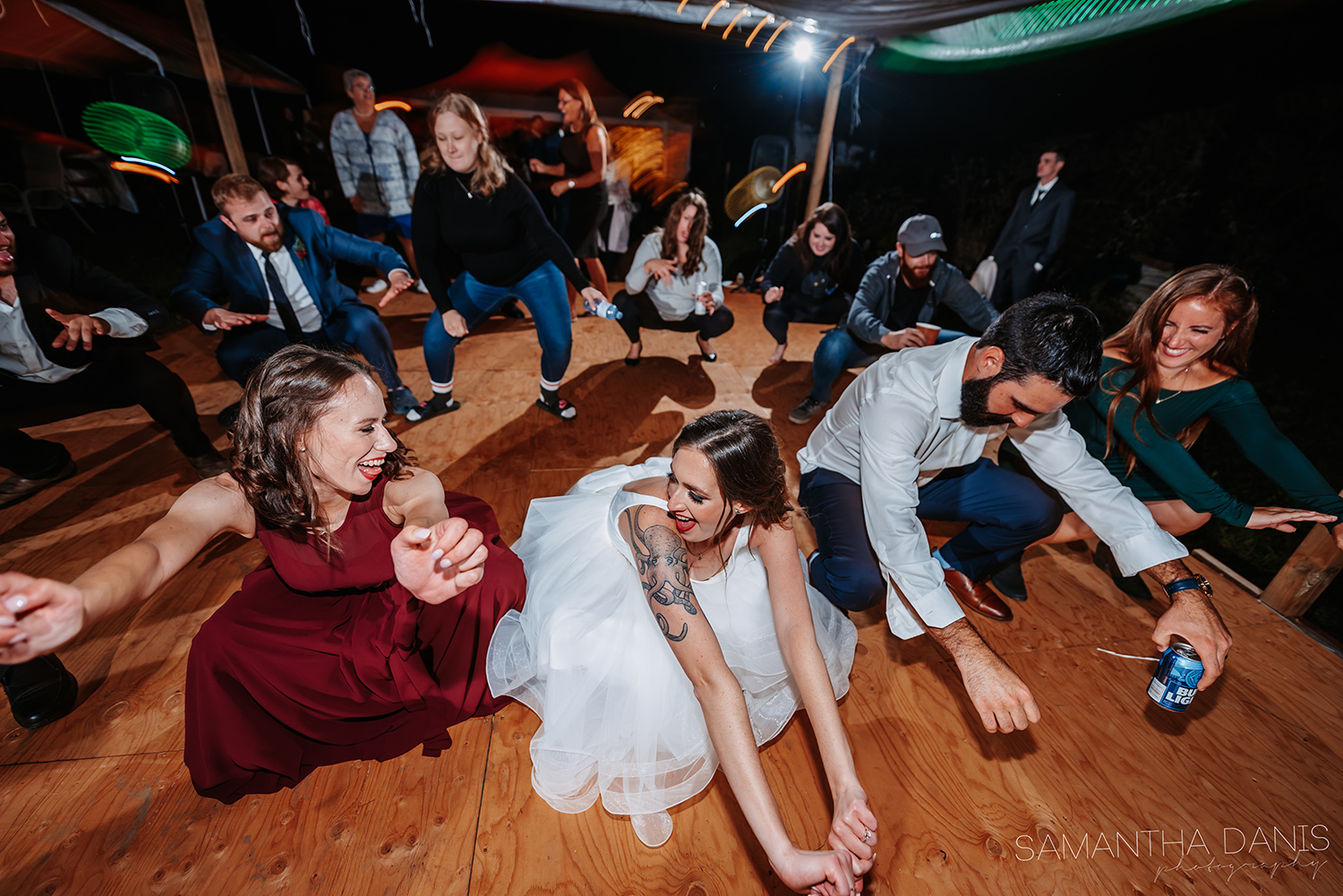 Valerie and Simon, thank youuuuuu! For being you, for being so kind, for being so loving and for throwing such an awesome party. I know the pandemic wasn’t easy on you, I know the stress was hard. But know that everything was beautiful and it was a night I, and your guests, will never forget. Love you both dearly xox

That light though 🤍 Of course I get all the de

Yesterday🤍 Thank the lawd we moved the session

All about the details 🤍 Seriously couldn’t g

Always🤍 Yesterday was magical. With everything