I’M BACK! And I’ve been itching to get back outside and get some beautiful Ottawa Winter Engagement photos done… Except that not a lot of people apparently like winter so it’s been a little dry on my end haha. Luckily, after a few reschedules, Valerie and Simon were able to make it happen! We’d had a crazy warm week leading up to the wedding with a lot of the snow having melted away. I was a tad worried but we did end up getting a good 30-45cm of snow two days prior to the session so we were golden! I’d never met Valerie and Simon in person before so it was almost a guessing game as to who my clients would be so I sat in my vehicle at the Arboretum kind of eyeballing every car that arrived to see if it was them. Sure enough, Val pops out of her car and flags me down… in sweatpants? I was a little confused because most people wouldn’t wear sweats to their engagement session but hey, if that’s her style then I’m down (I live in sweats soooooo). She smiled as we huddled in a little circle with her two friends who came as a)support b)dog watchers and c) camels as we had them hold stuff while we shot lol. She assured me that the sweats were to keep her warm in between photos and while we walked because you know, Canadian Winter and all. Simon quickly followed with their ADORABLE tripod dog, Paco. He’s this huge mix breed beautiful brindle dog and I just couldn’t get enough of him, so cute and soft to boot.

We wandered around the arboretum, stopping whenever the scenery and lighting were just spot on for the happy couple. We started things off with Paco so that he could go play after but needless to say, he did not want to cooperate. There were other dogs, squirrels, birds, noises, so much for this big guy to handle. After even trying some cheese treats we decided maybe we’d give it a go later in the session. Valerie and Simon had warned me early on that they didn’t often get photos taken and would most likely be awkward. My answer to that is, who isn’t? Everyone (except like professional models and celebrities) are awkward in front of the camera… Hell, even I’m awkward when I’m in front of a camera! But you learn to let go and just be in the moment and that’s when all the magic happens. And the magic so happened. It didn’t take long for them to get comfy at all and they rocked their session like it was no ones business. We had such a great time walking around, trying to stay warm and just laughing all together. It was like catching up with old friends. For some of the last shots I asked their two friends to gather up some snow and throw it in the air for some extra big snowflakes (it was snowing but not big fluffy snow), well that ended up being a bust lol. We tried a few times but the snow was super sticky and just staying in big chunky balls, one of which landed perfectly on top of Val’s head (I kept it in their full gallery cause I though it was so funny). But alas, it made for a funny moment and just added to the wonderful time we had together. Their wedding seems so far away now (it’s in October 2021 so we got a ways to go), but I honestly can’t wait to celebrate with them at the beautiful Temple’s Sugar Bush. No snow throwing though, maybe we can throw some leaves, what do you guys think ;). 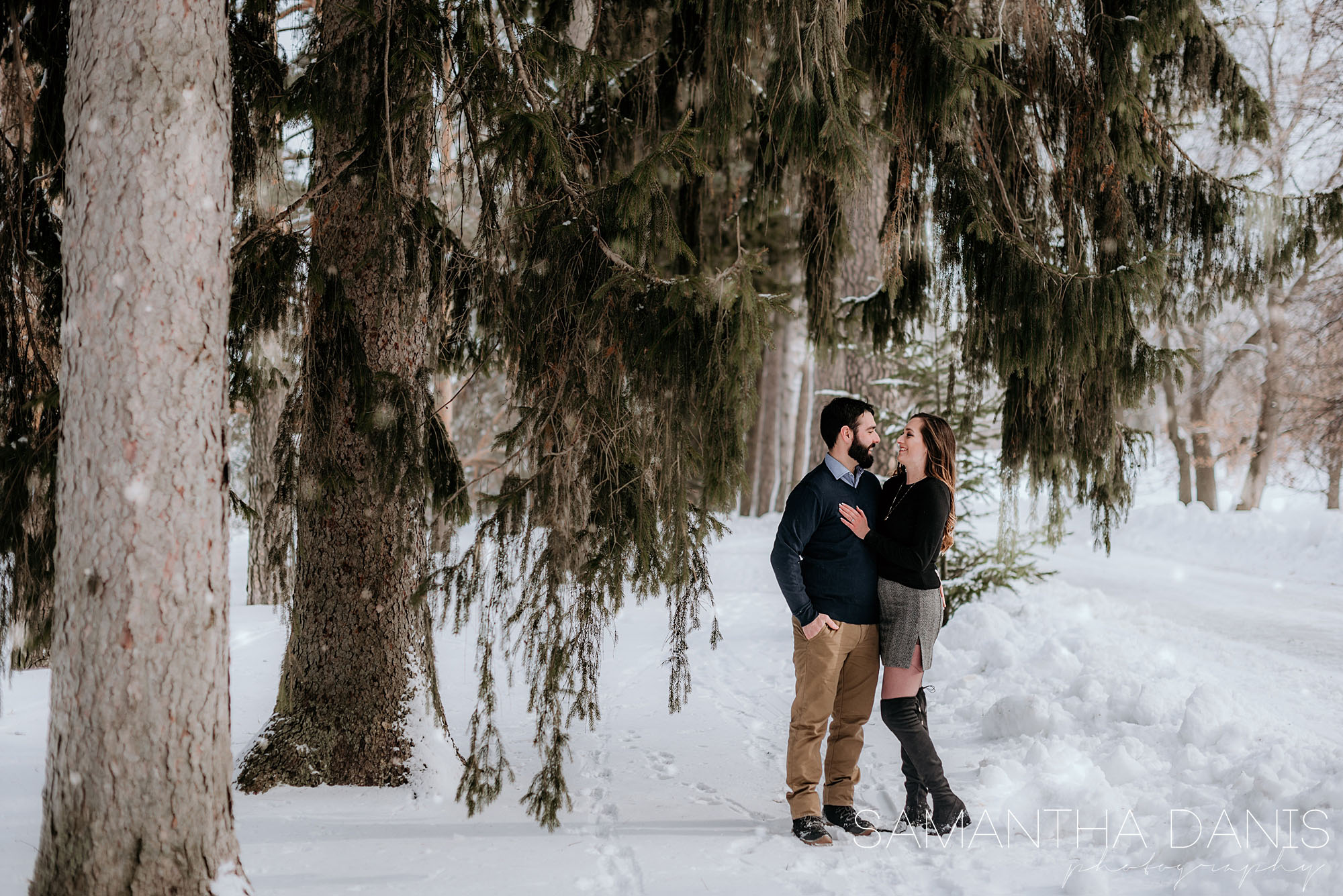 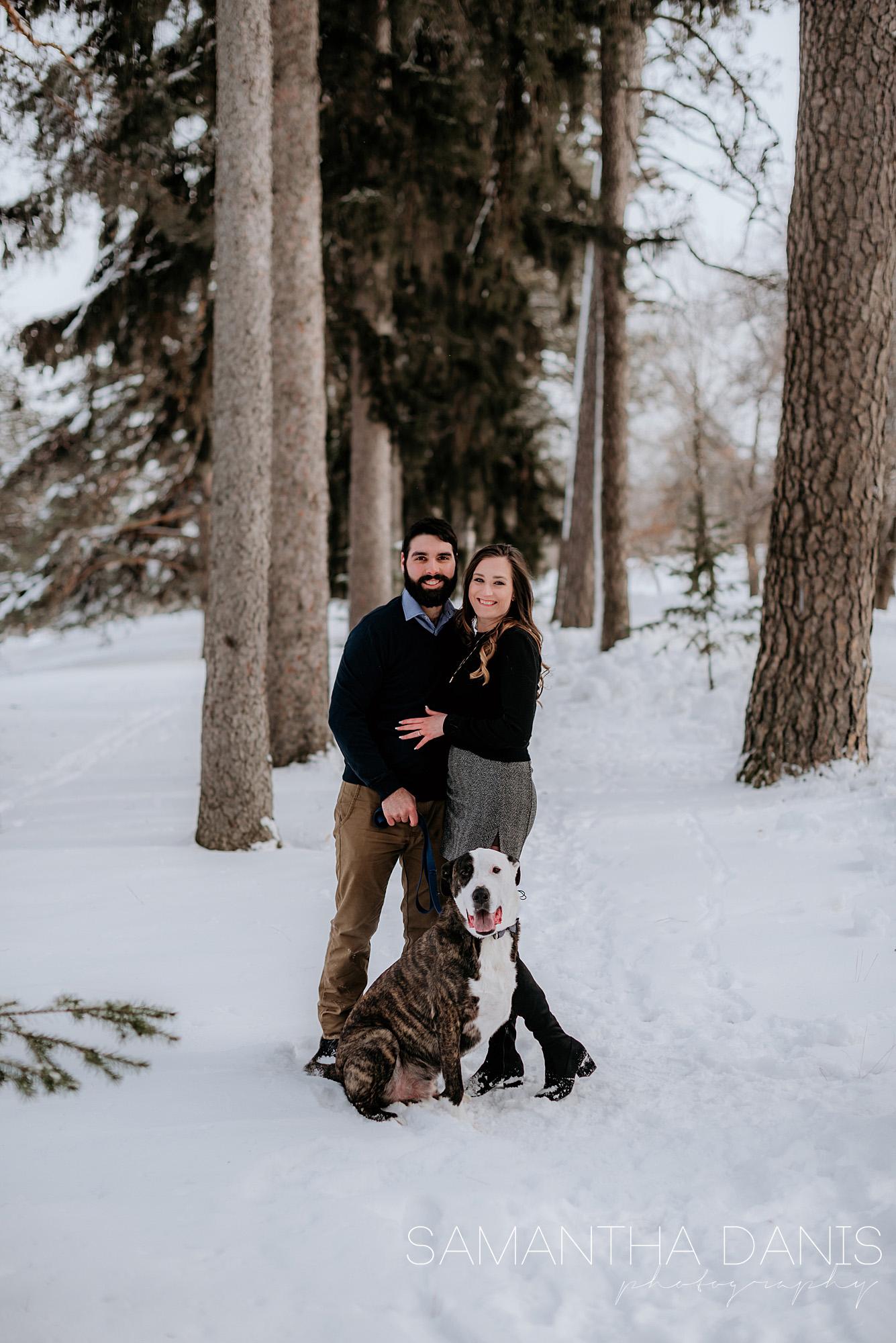 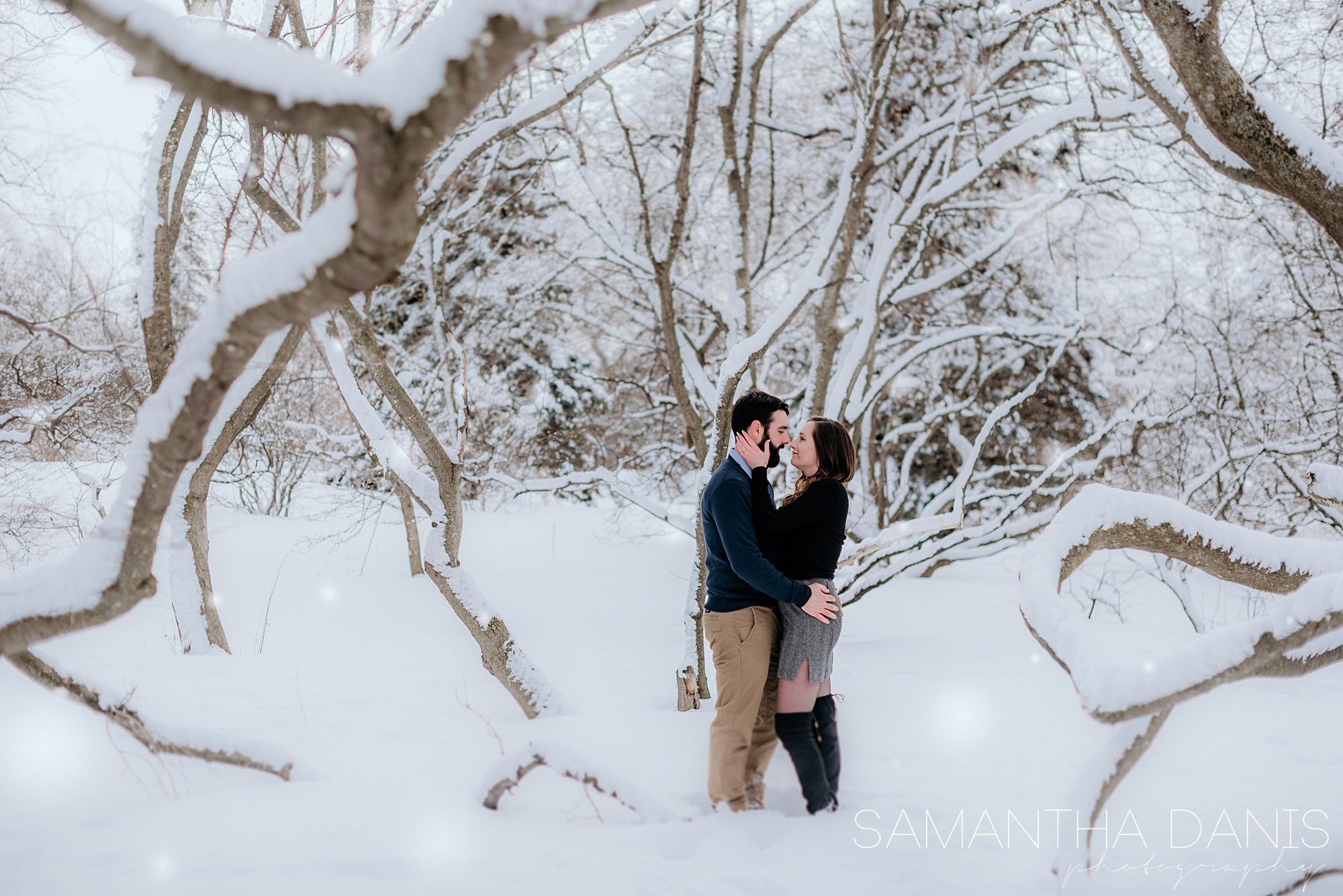 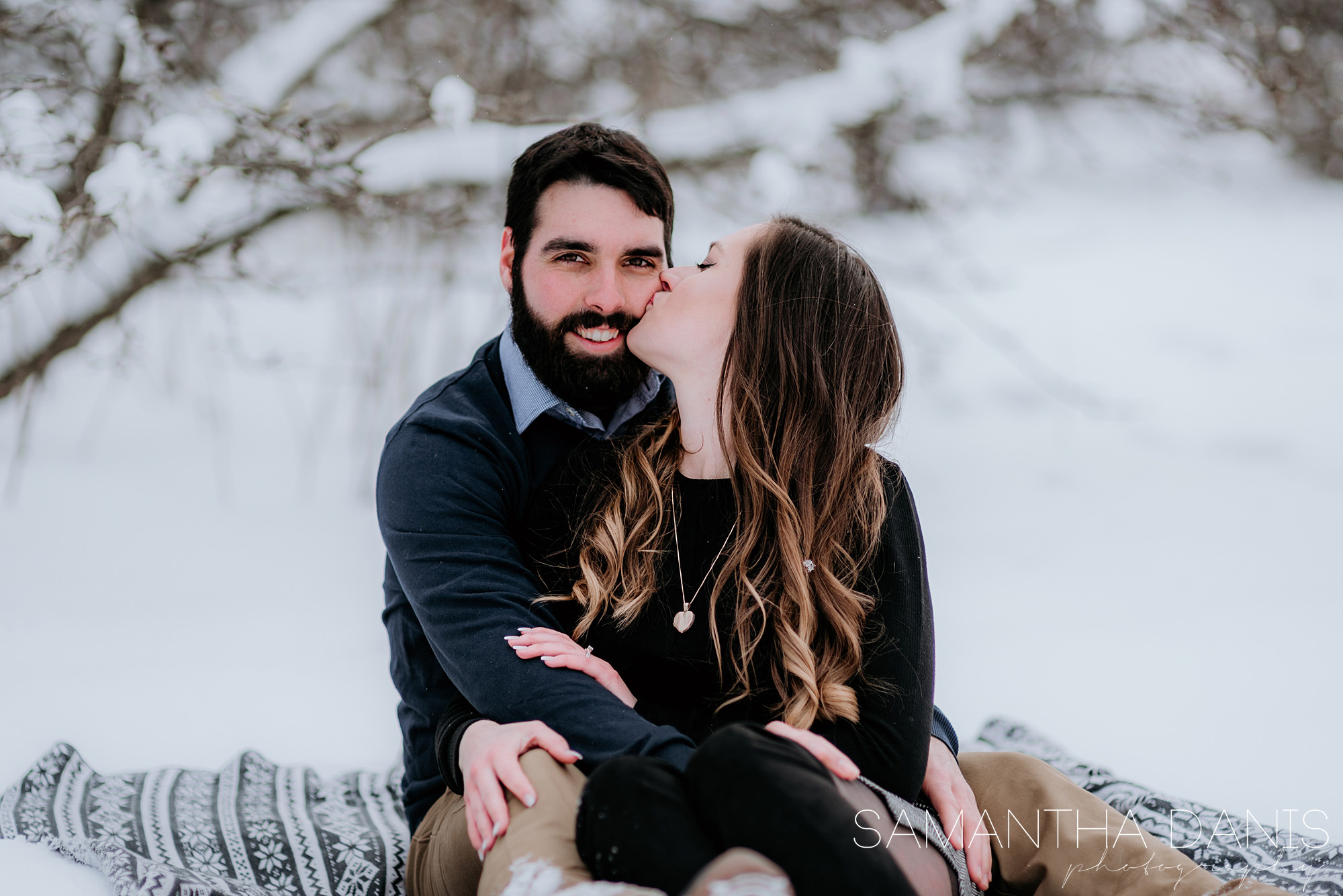 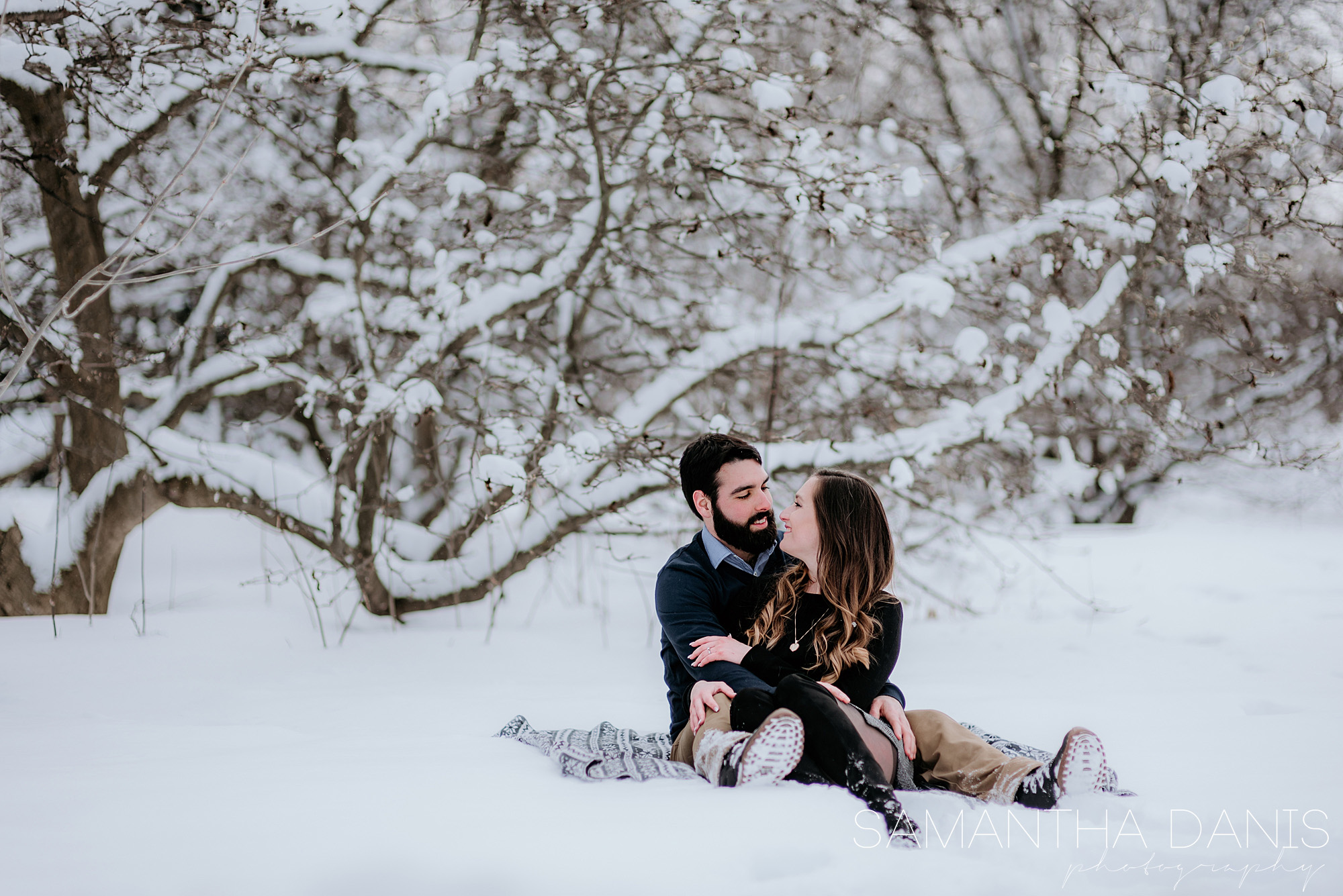 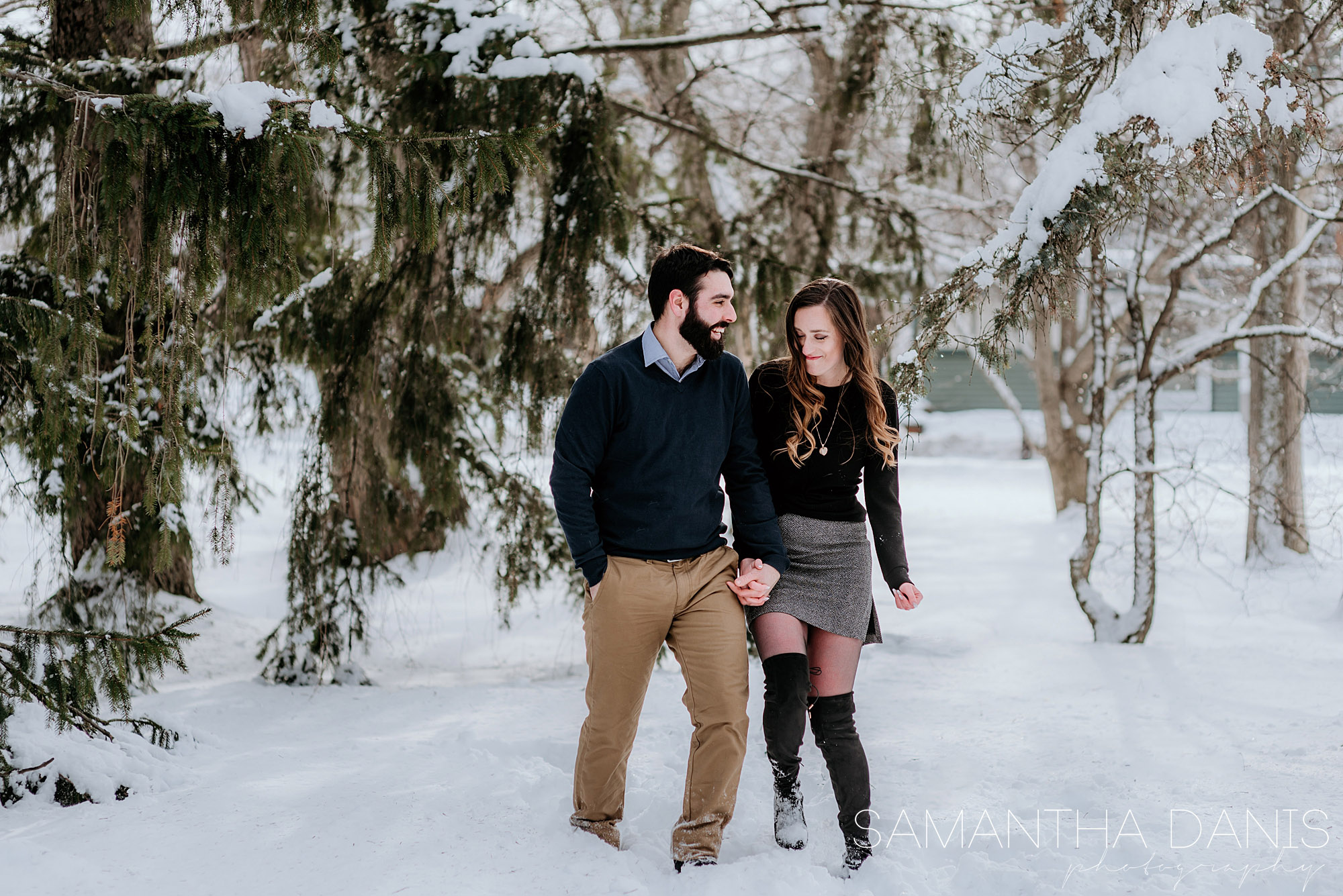 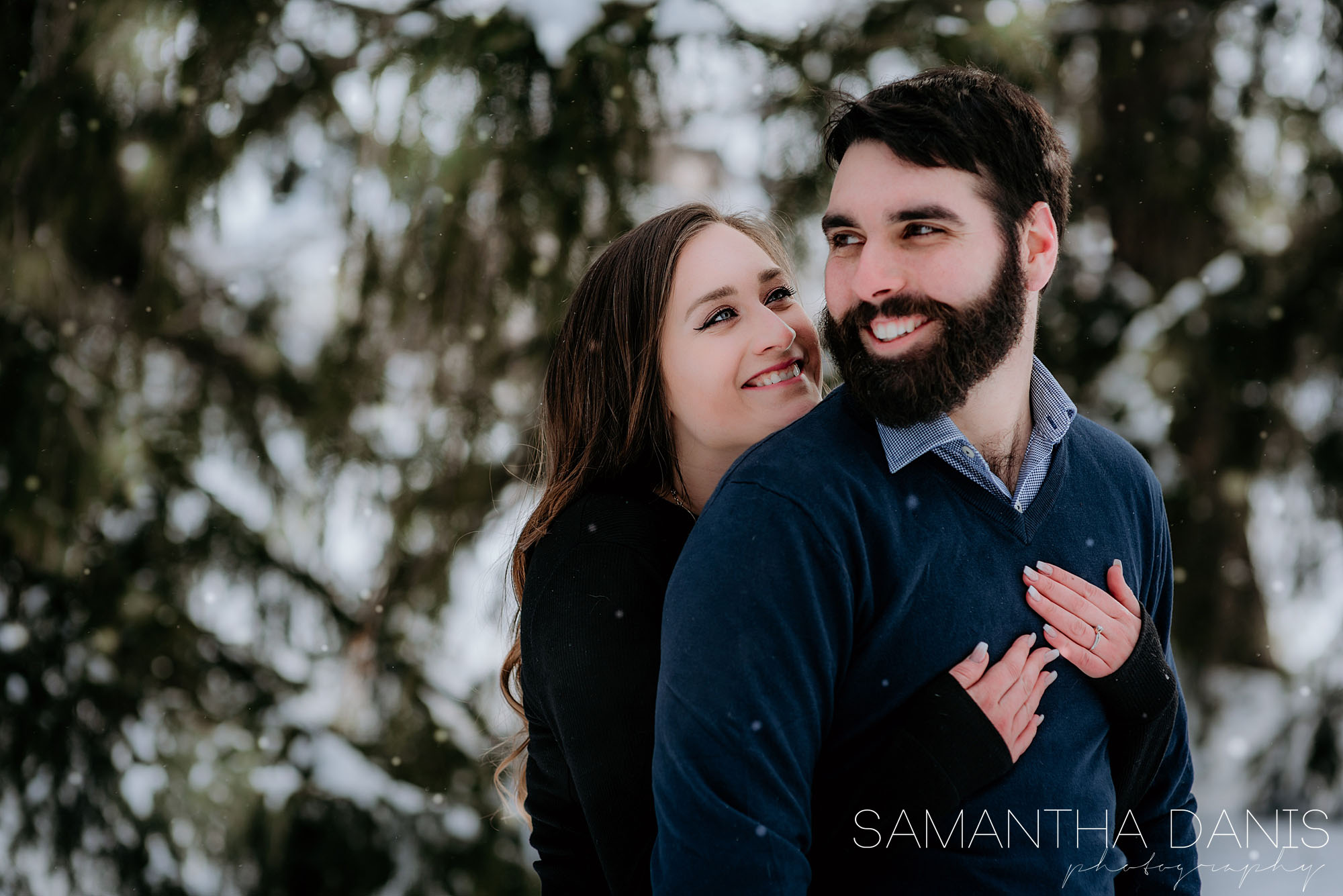 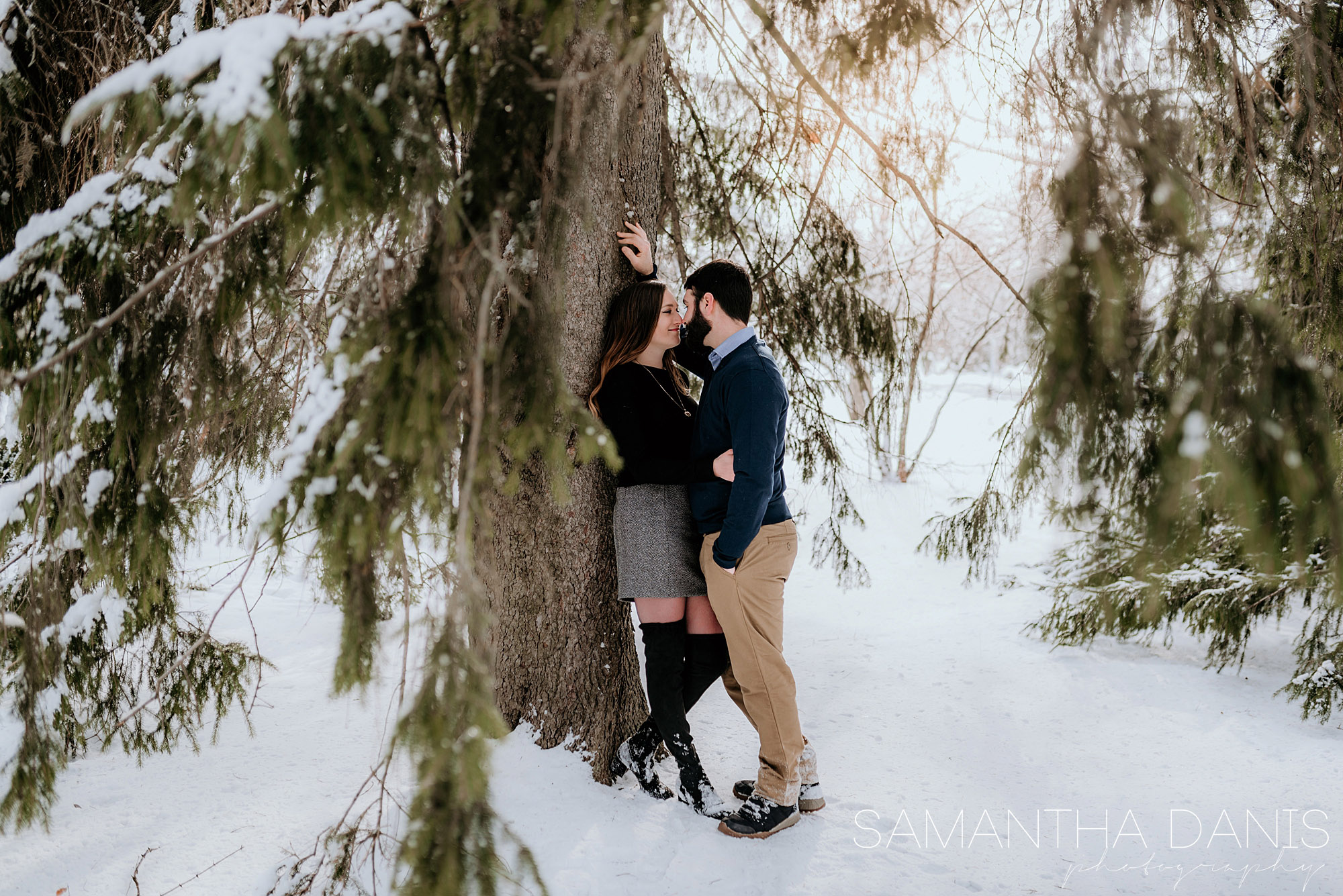 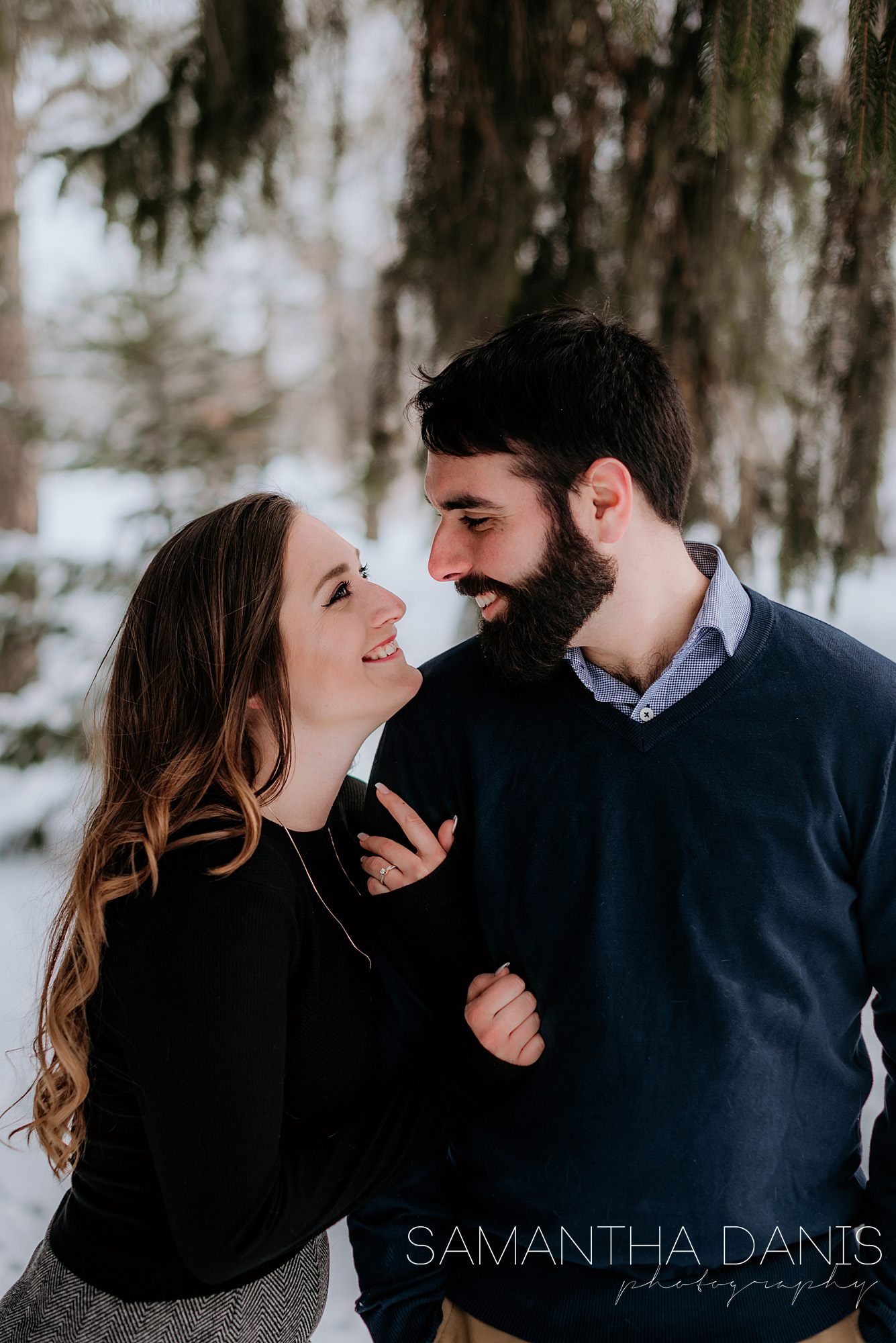 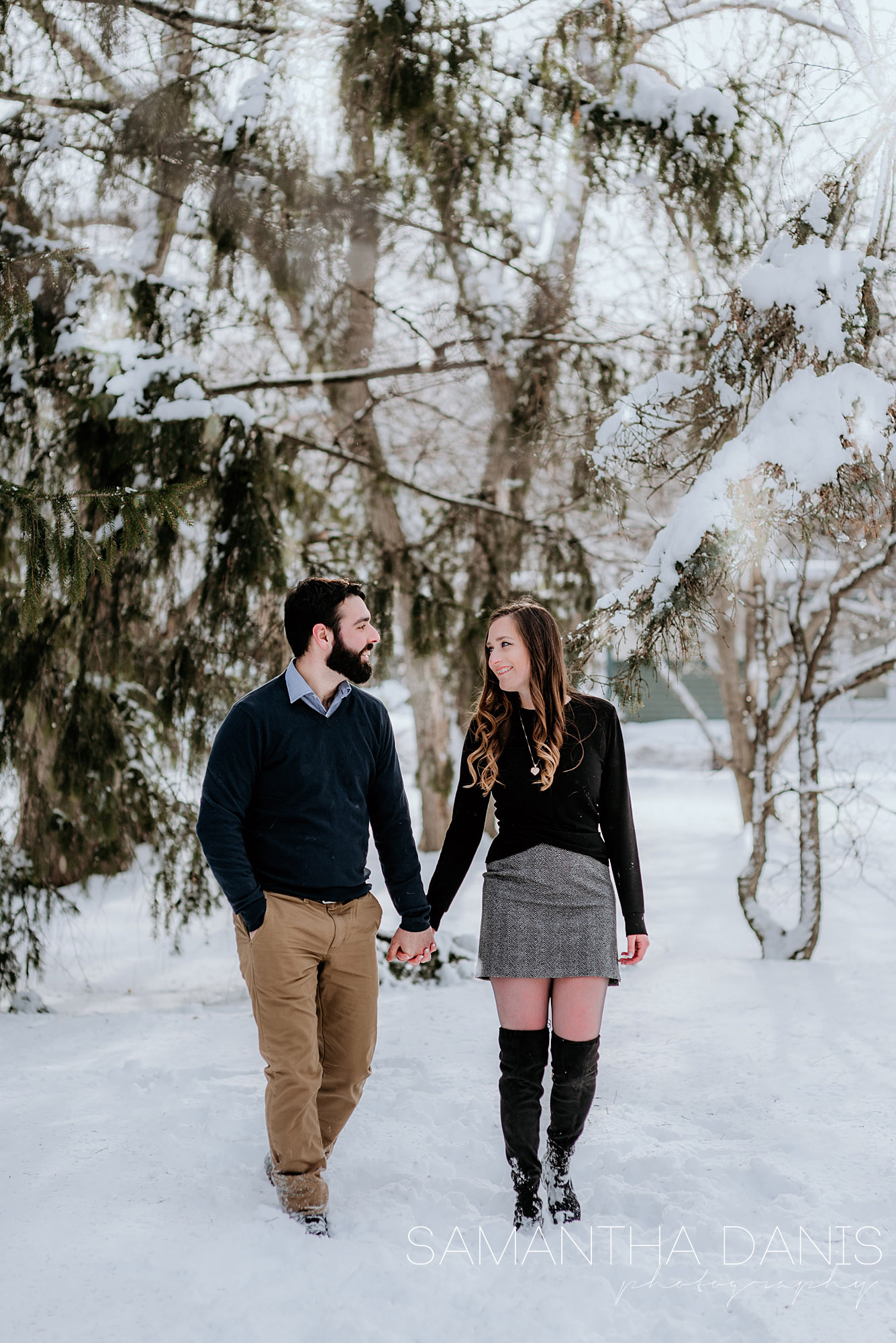 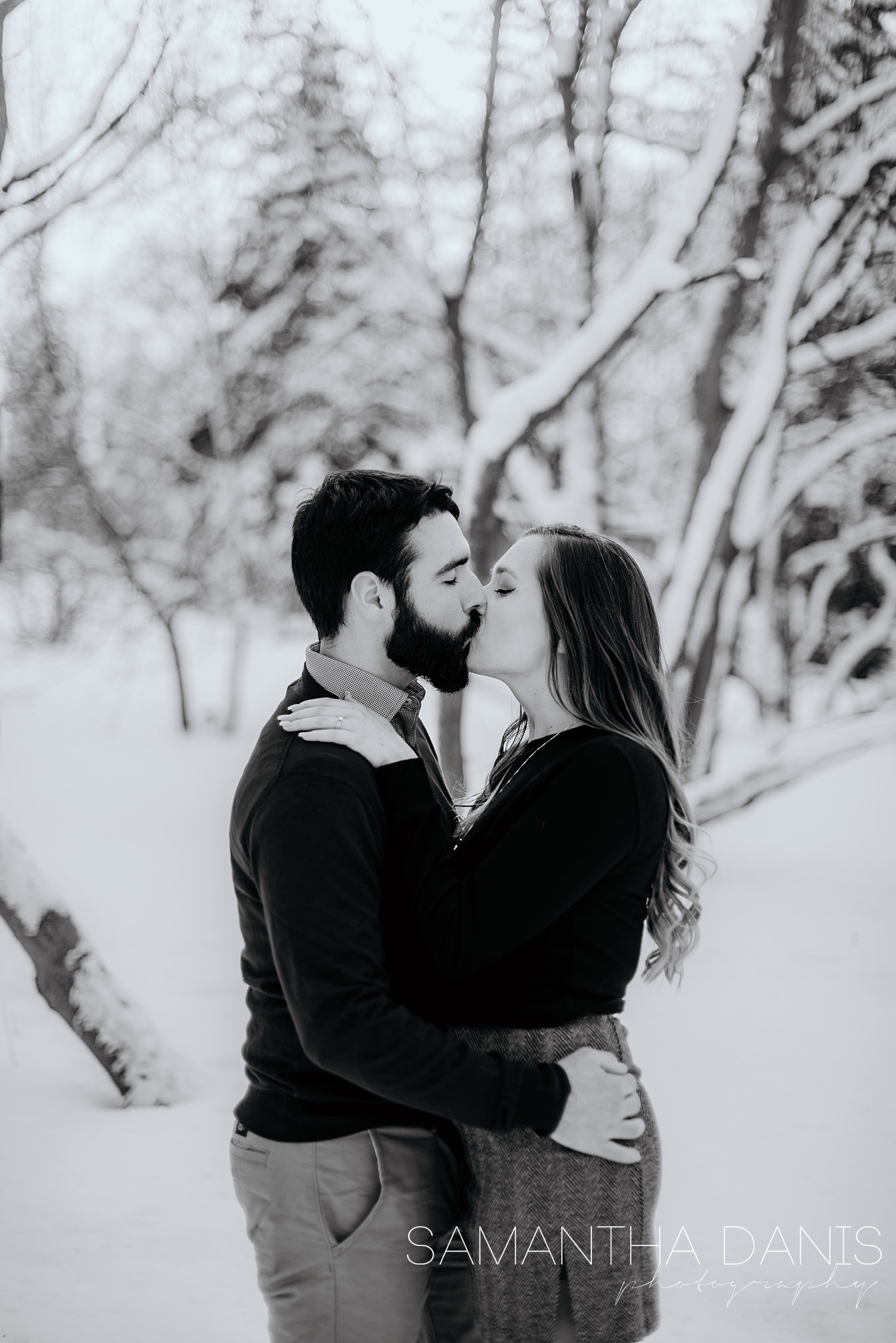 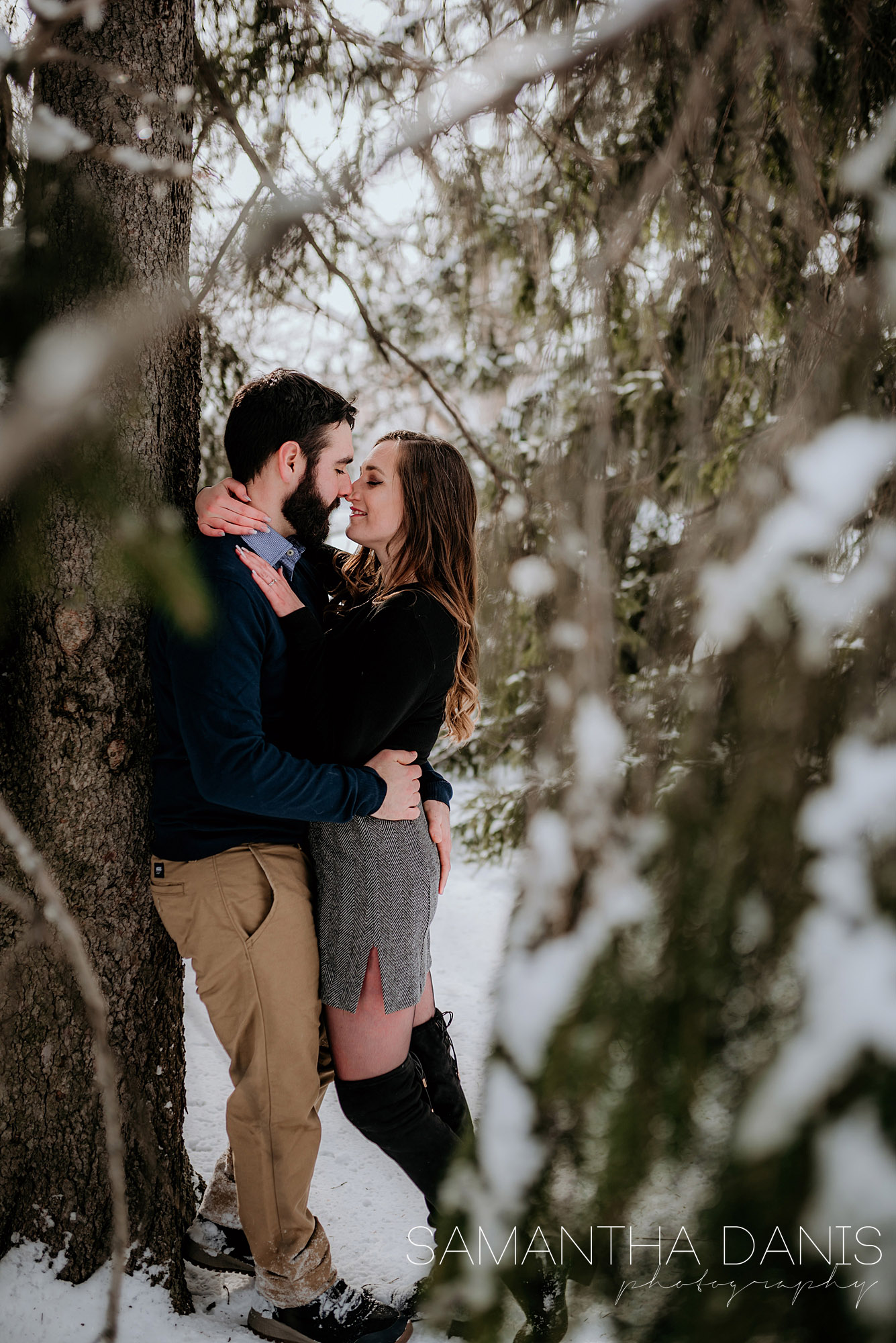 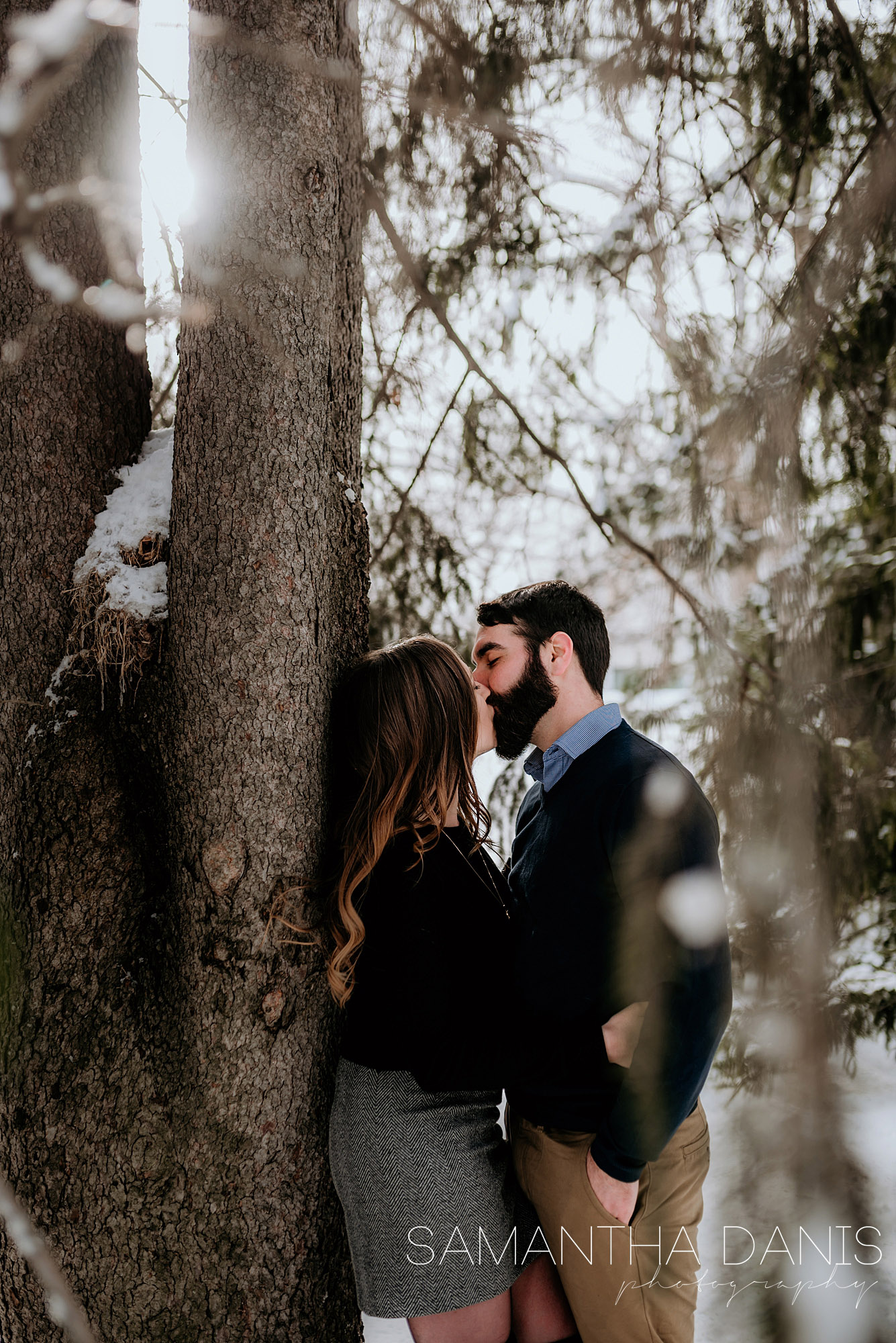 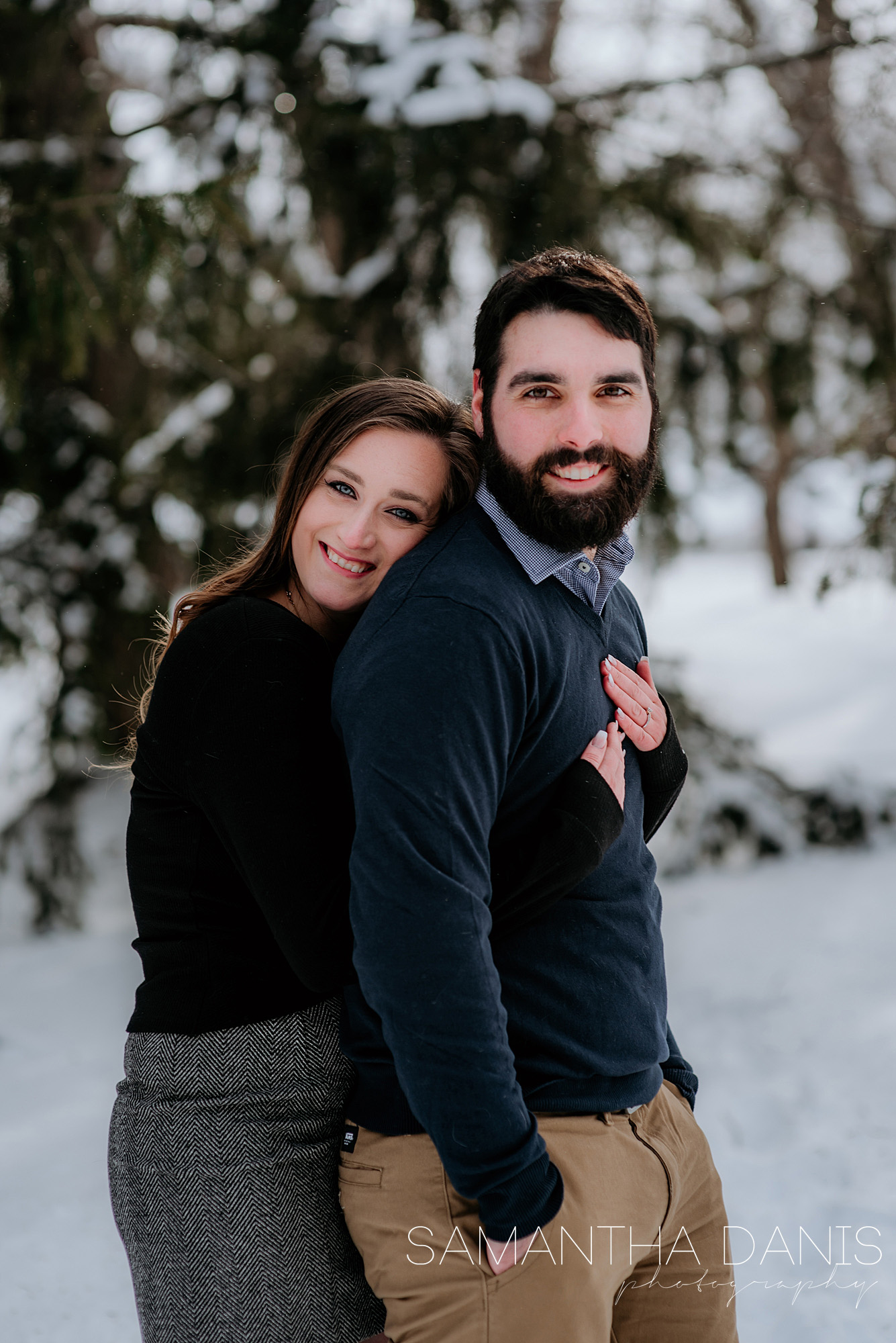 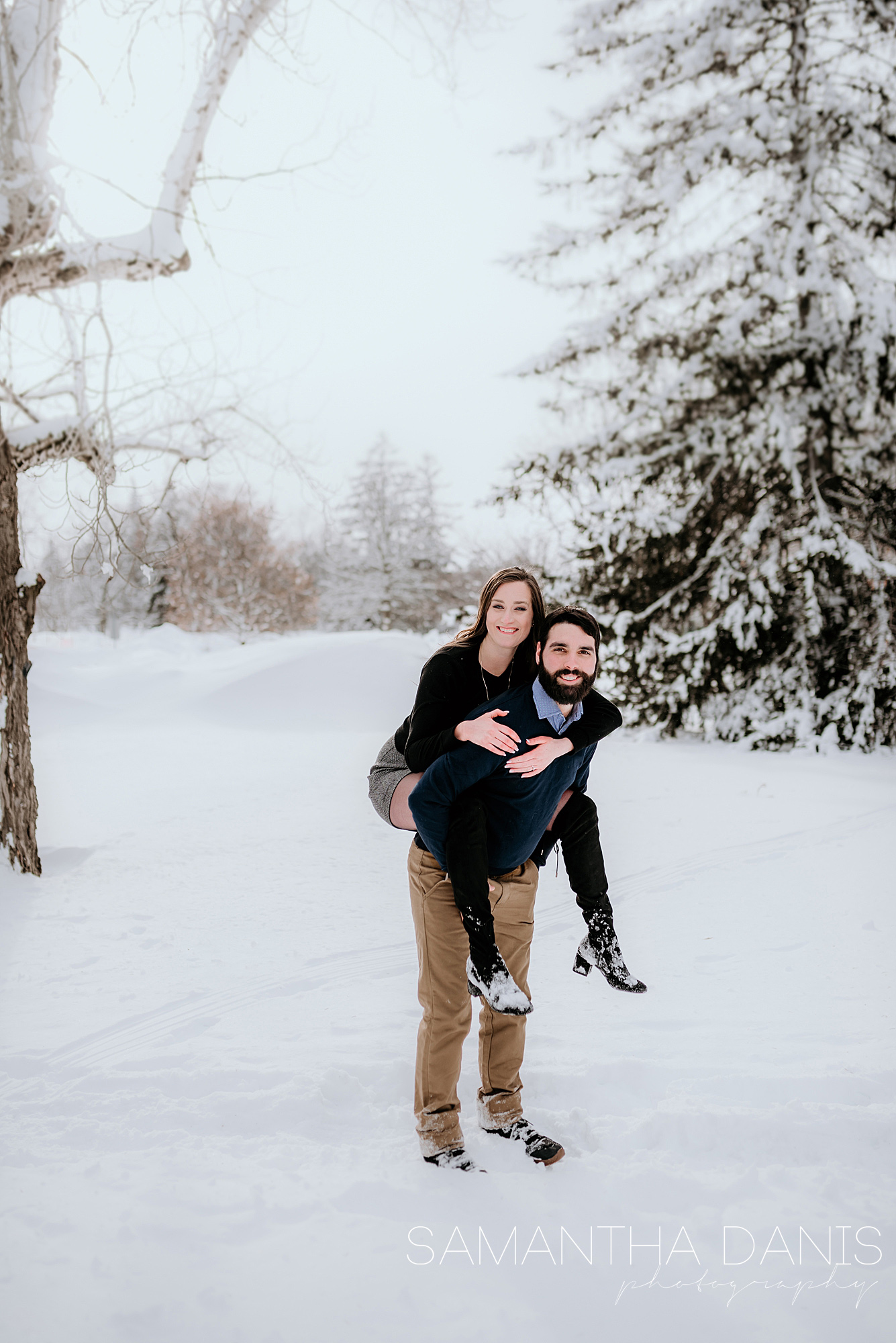 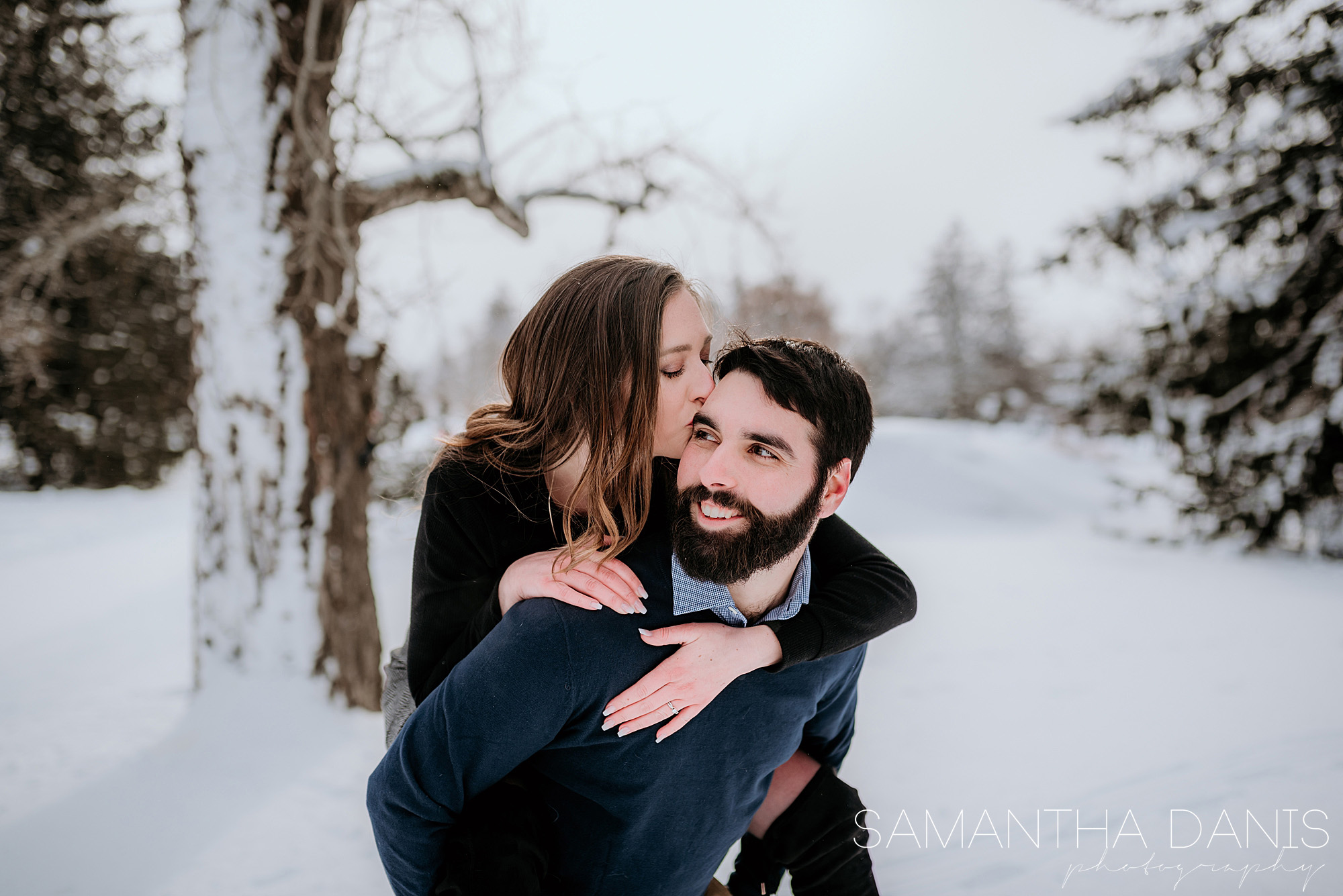 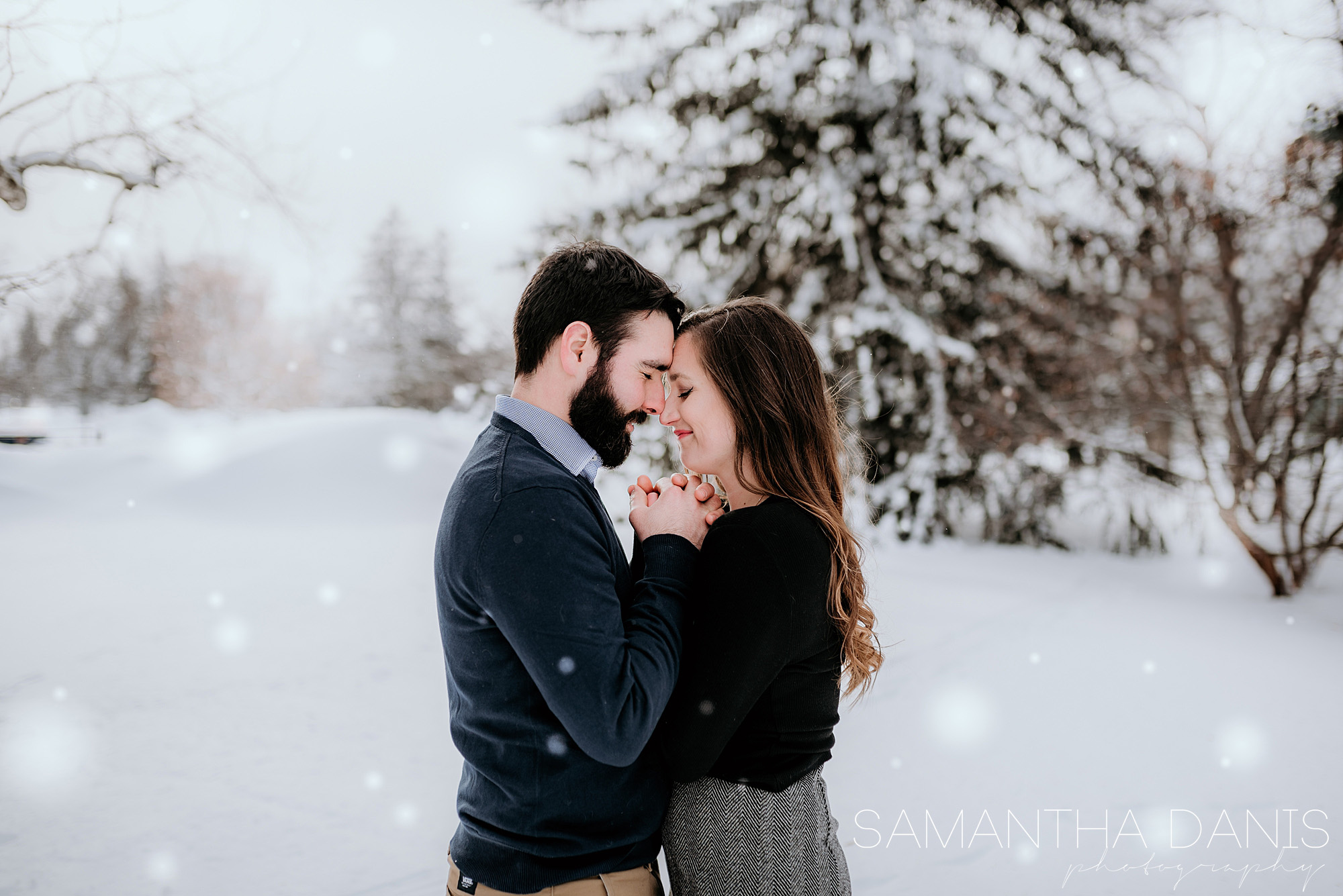 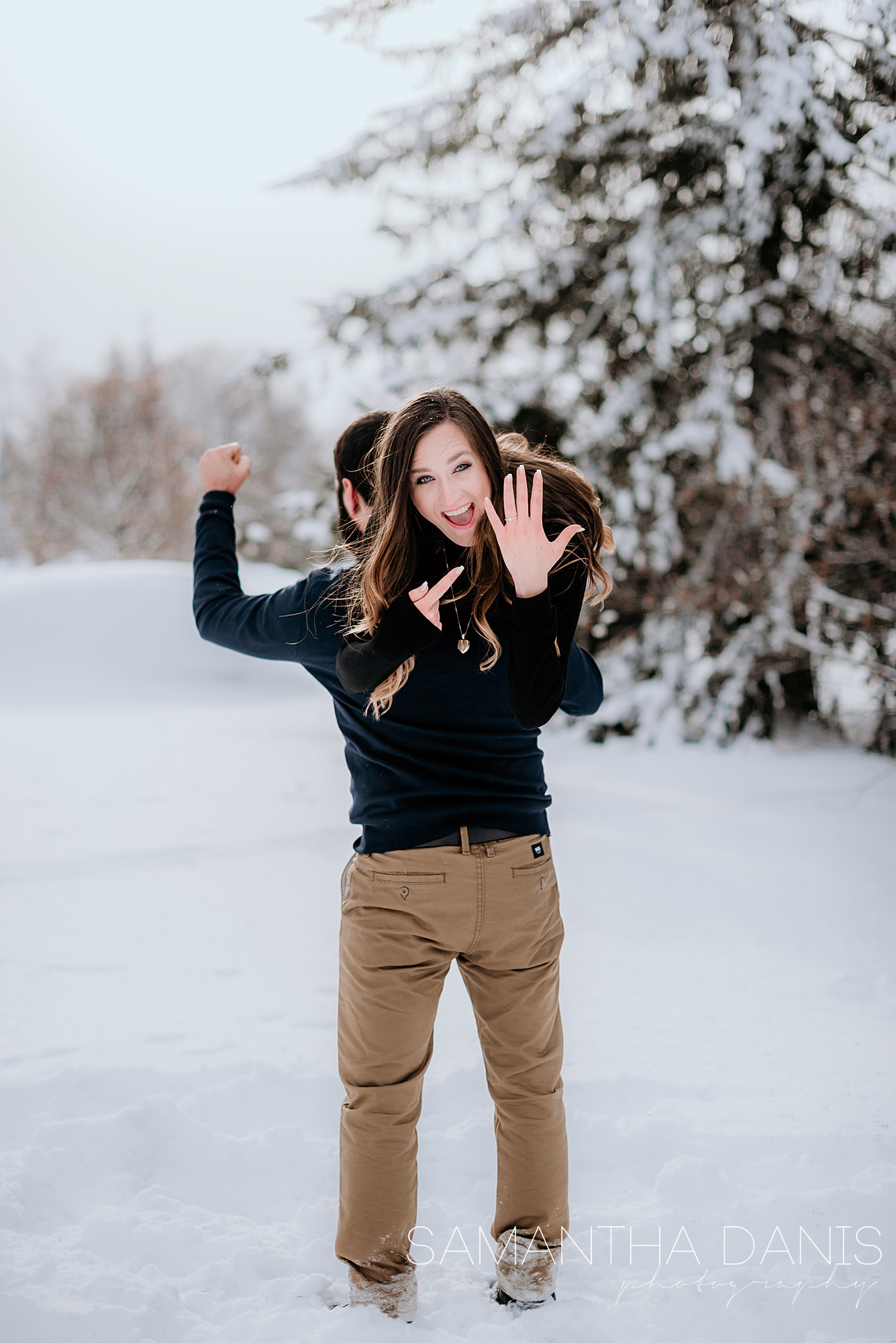 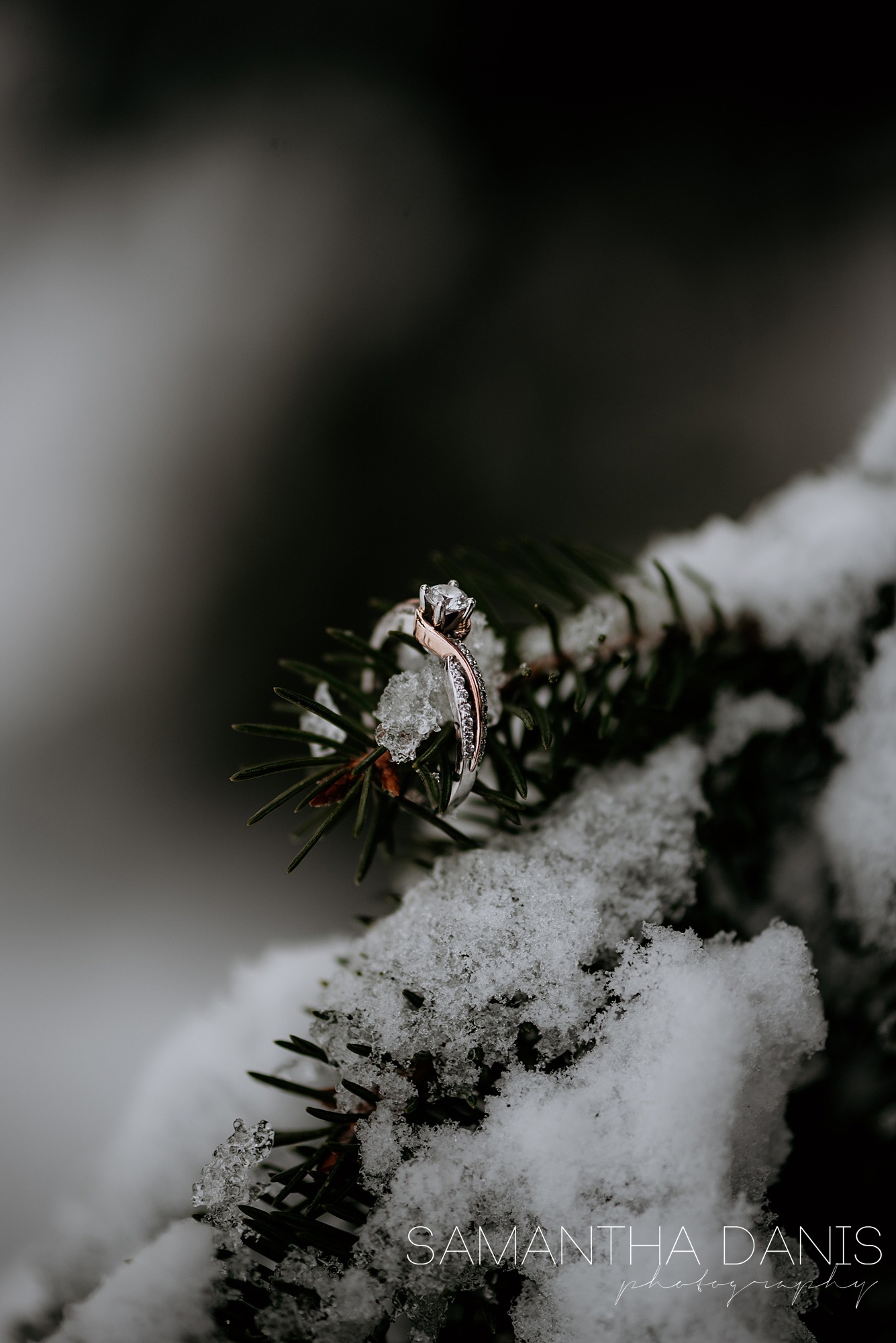 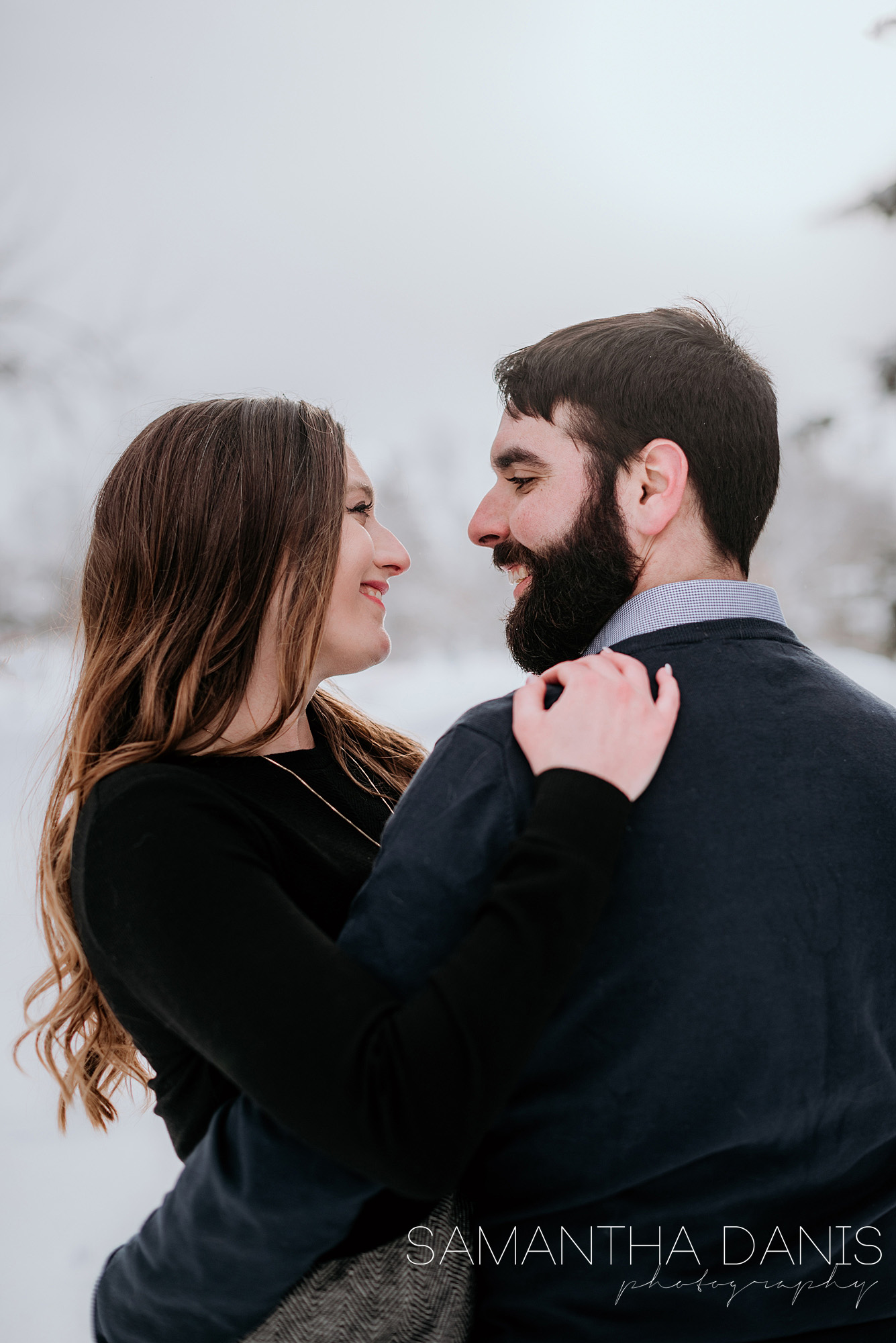 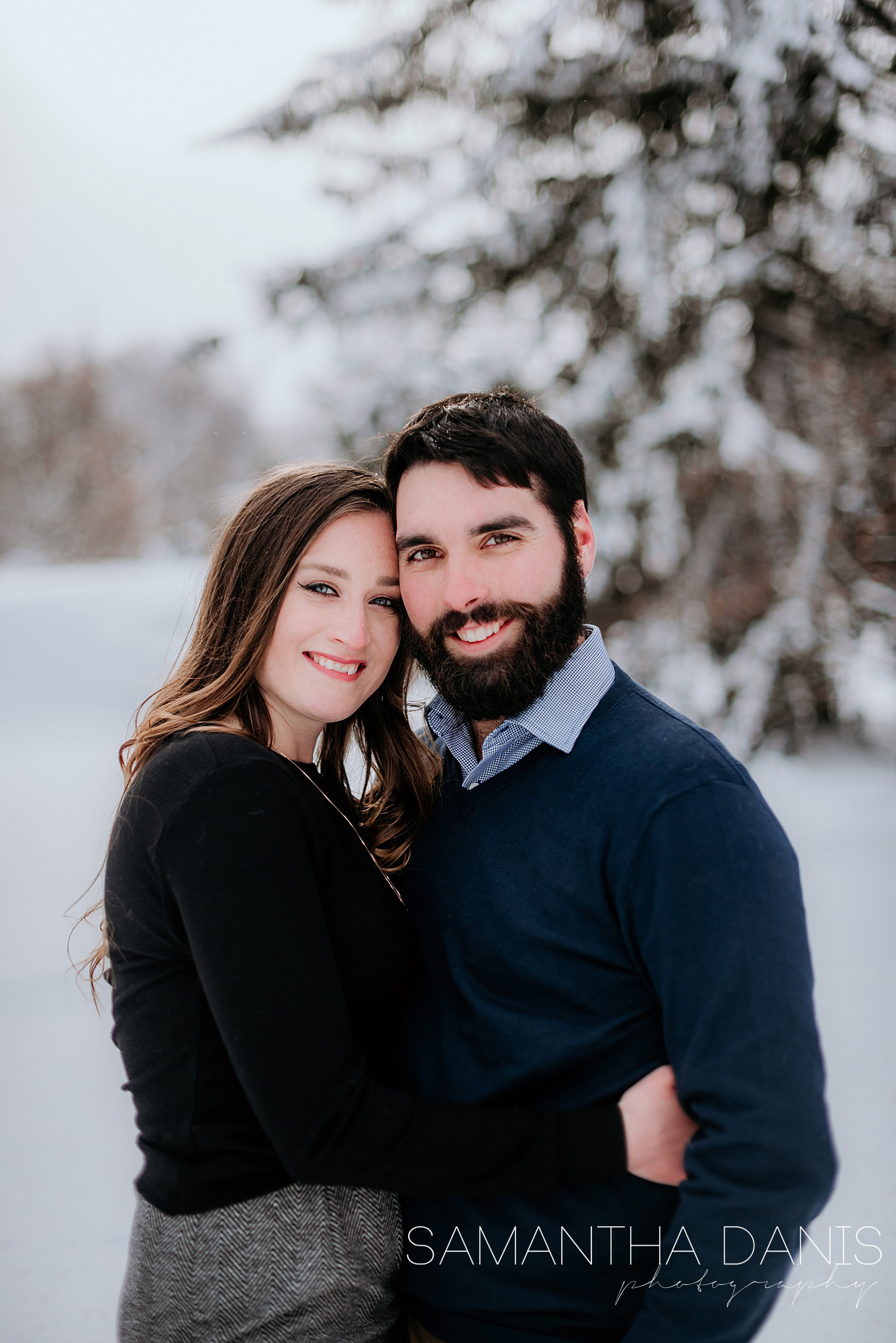