Finally some good weather for some Canal skating, which is what Sarah and I were hoping for! This session was suppose to happen in January but on that day Sarah woke up to the Canal being open only to take a shower and when she hopped out it was closed! So the last week-end of Winterlude it was and it was a total success!

I met with Sarah and Jon at the Love Lock Bridge (Corcktown Bridge if you wanna be literal) and they actually wanted to start on the bridge for a few quick photos before heading onto the canal. When I asked why, Sarah told me that it’s where Jon proposed to her so it meant a good deal to them. Jon, who is always warm apparently, decided that today would be a good day to be consistently cold, even though it was a balmy -2 degrees out. Now it’s not his fault, it just so happened that he woke up freezing today and he just couldn’t warm himself up, he was basically me on a regular basis haha! After making him take his coat off for those first few photos, we bundled back up and went to lace up our skates to manoeuvre the busy-ness of the Rideau Canal. As we started to skate to get a bit of the Chateau in the background, Sarah told me that this was where she and Jon had their first date, another Awwwwww moment! Funny enough, Sarah had asked Jon if he skated and would like to go to the canal and he nonchalantly said; ”Of course”. Only for him to go buy skates that very night for their date! Now that is determination right there, also quite adorable. Bonus points to Jon! We skated around and chatted while taking photos for a little bit until we wandered over to the Beavertail-Hut-Hot dog and bench spot near Ottawa U. We decided to set down the giant Hudson’s Bay blanket right there, surrounded by people and have a cuddle session, Sarah and Jon cuddled, not me. It was quite an experience shooting these two, in the best way imaginable of course. They are so quirky and playful and just an absolute joy to shoot. I told Jon to nuzzle and kiss Sarah’s nose and he was just like; ”What is Nuzzling???” only for him to turn around and try and eat her nose haha. I have quite the reel of photos of him doing these silly things and Sarah just laughing her bum off. I was shooting close to the cedars behind them only to see through my viewfinder that they had both turned to look at me at the same time doing their best Zoolander impressions! I was dying of laughter, god I love these two! We skated back to solid ground, not without a quick skating lesson by me for Jon (Sarah’s a hockey player so girl is Golden). 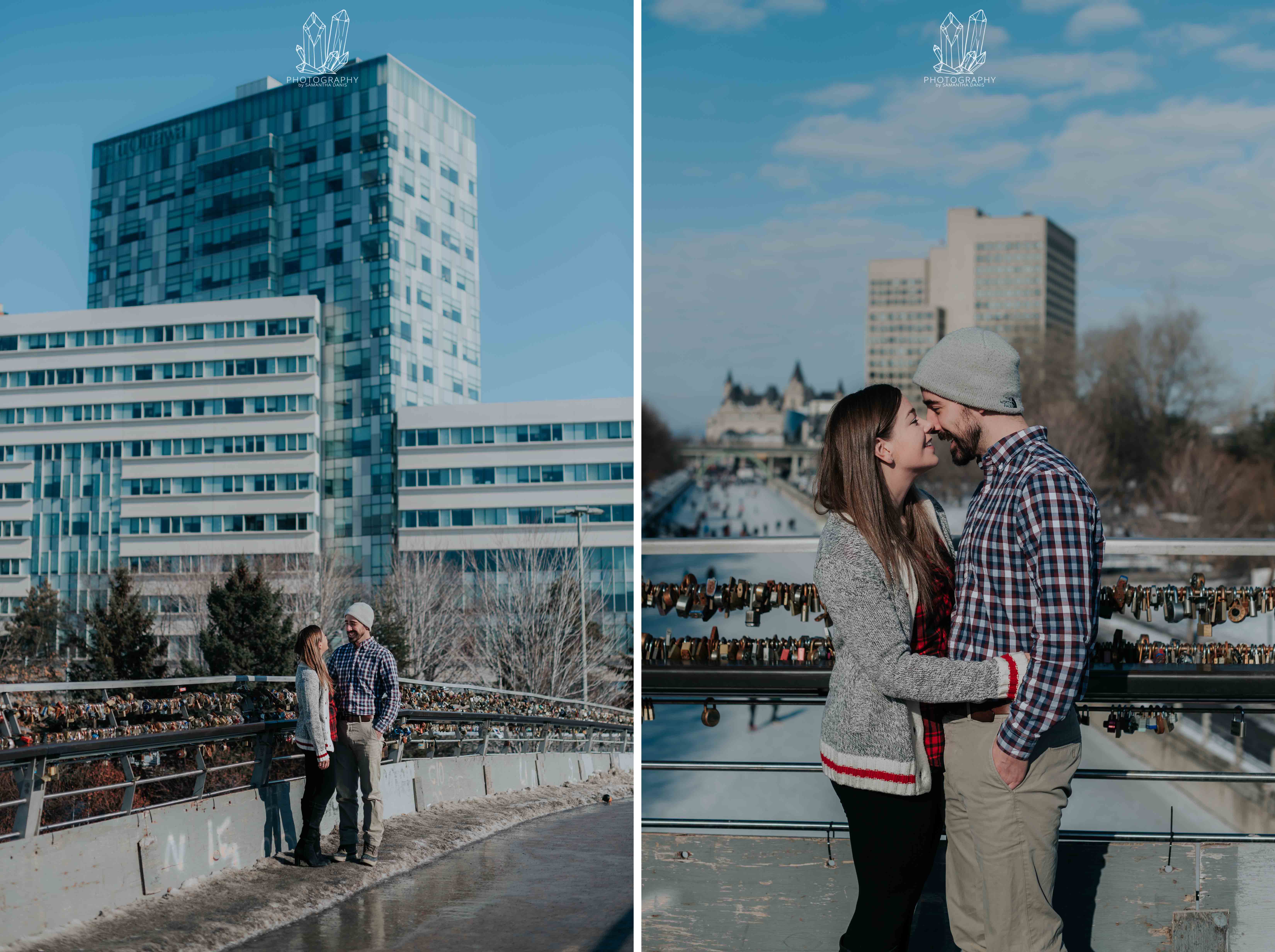 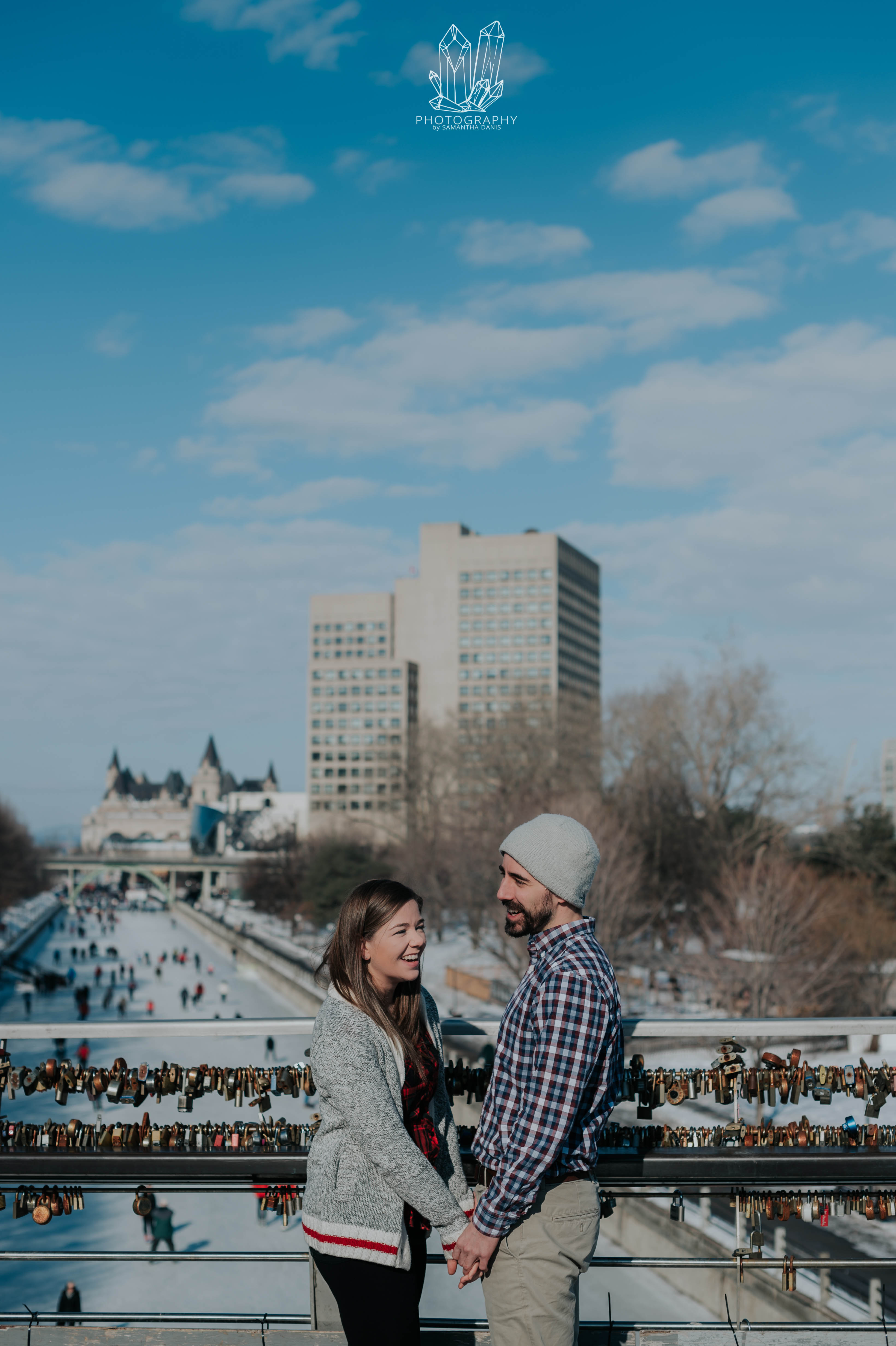 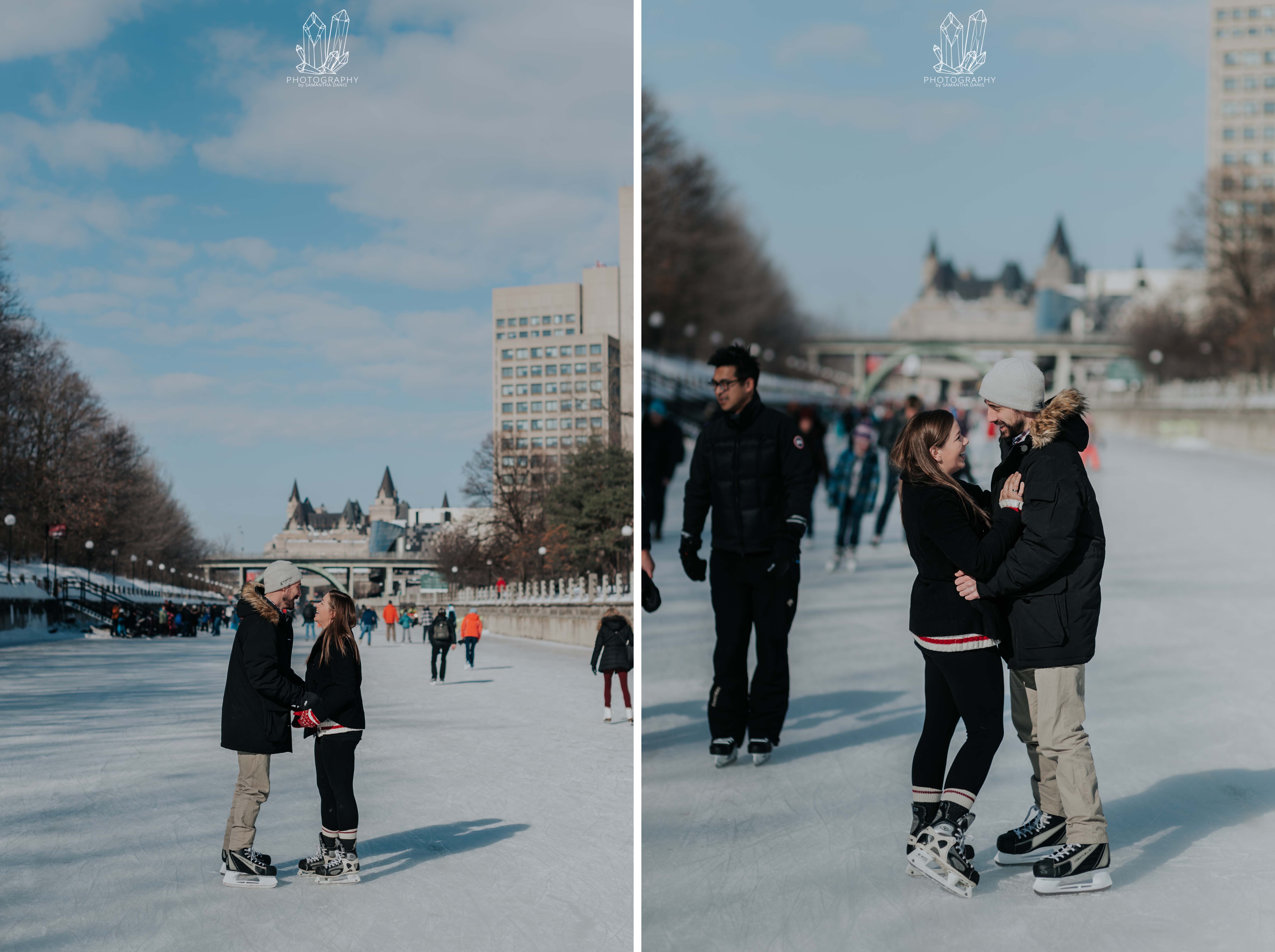 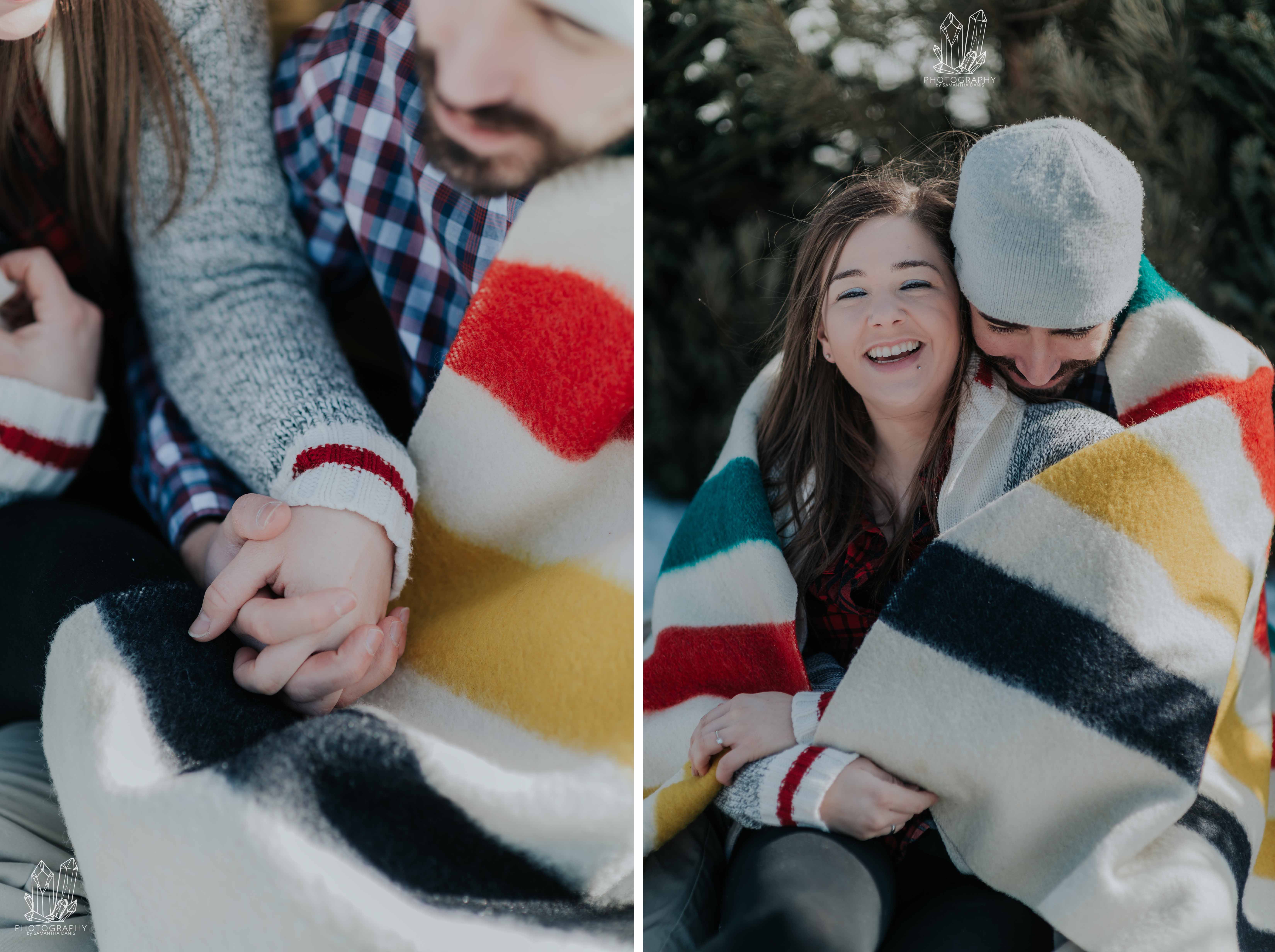 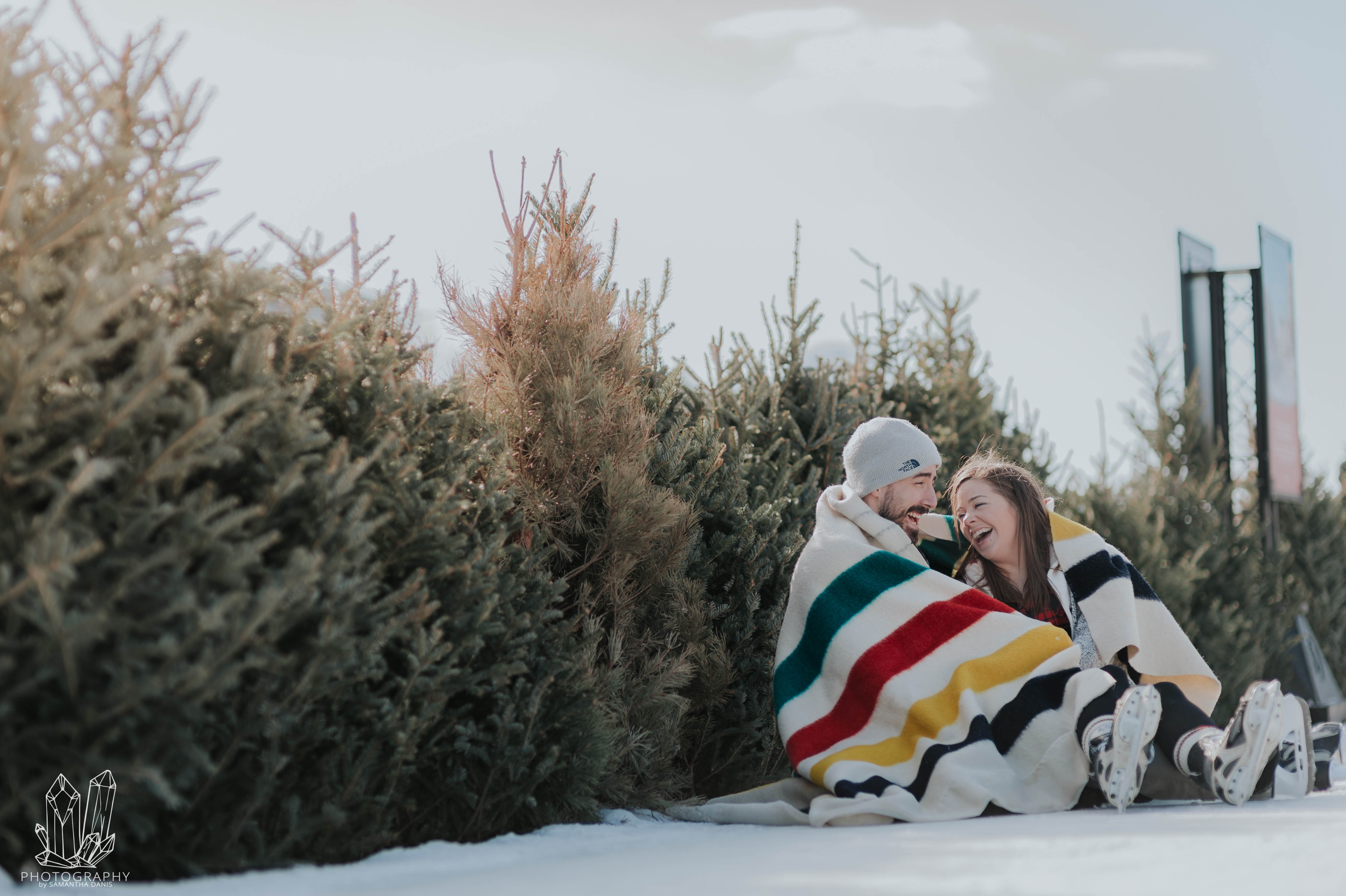 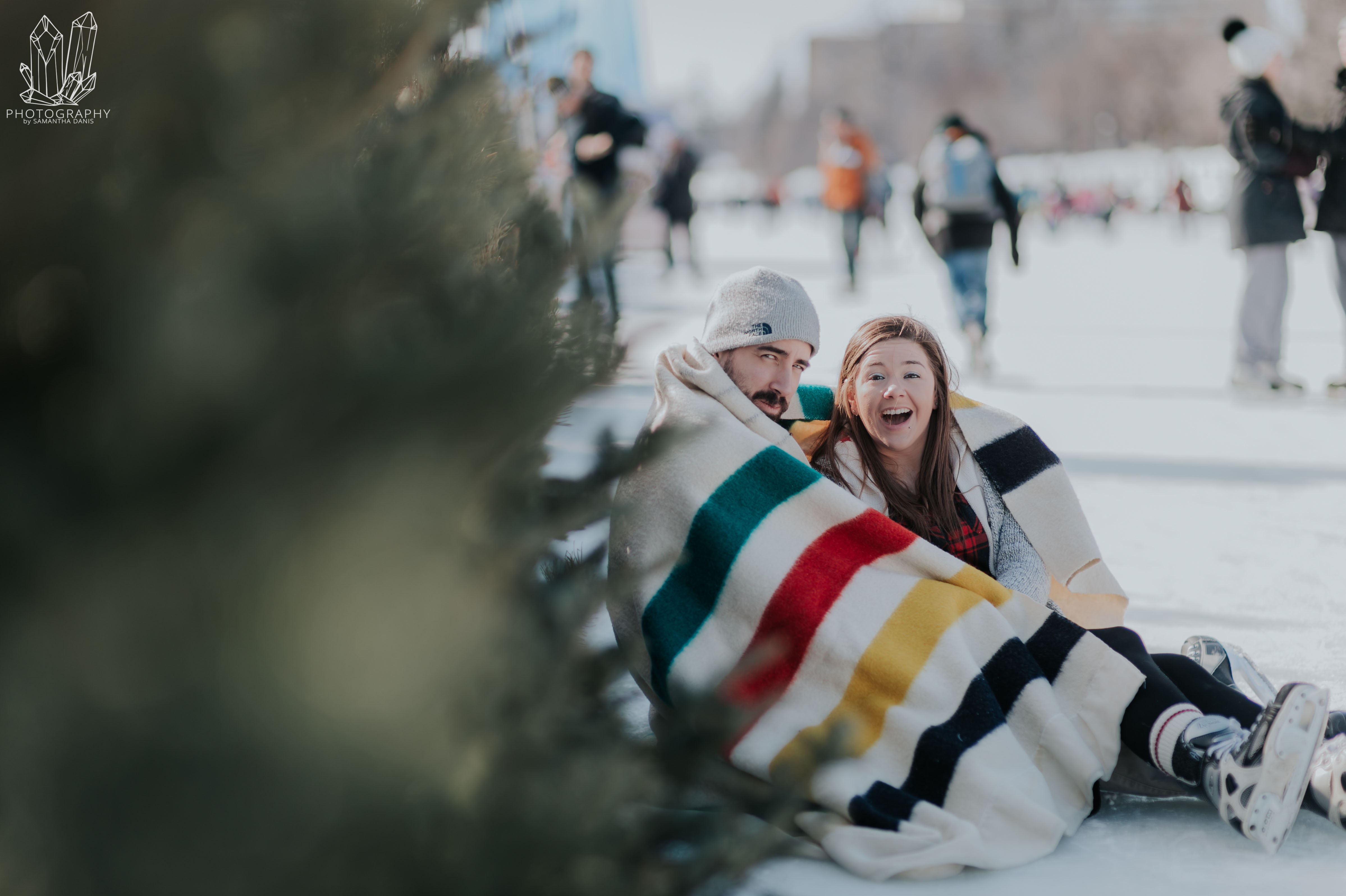 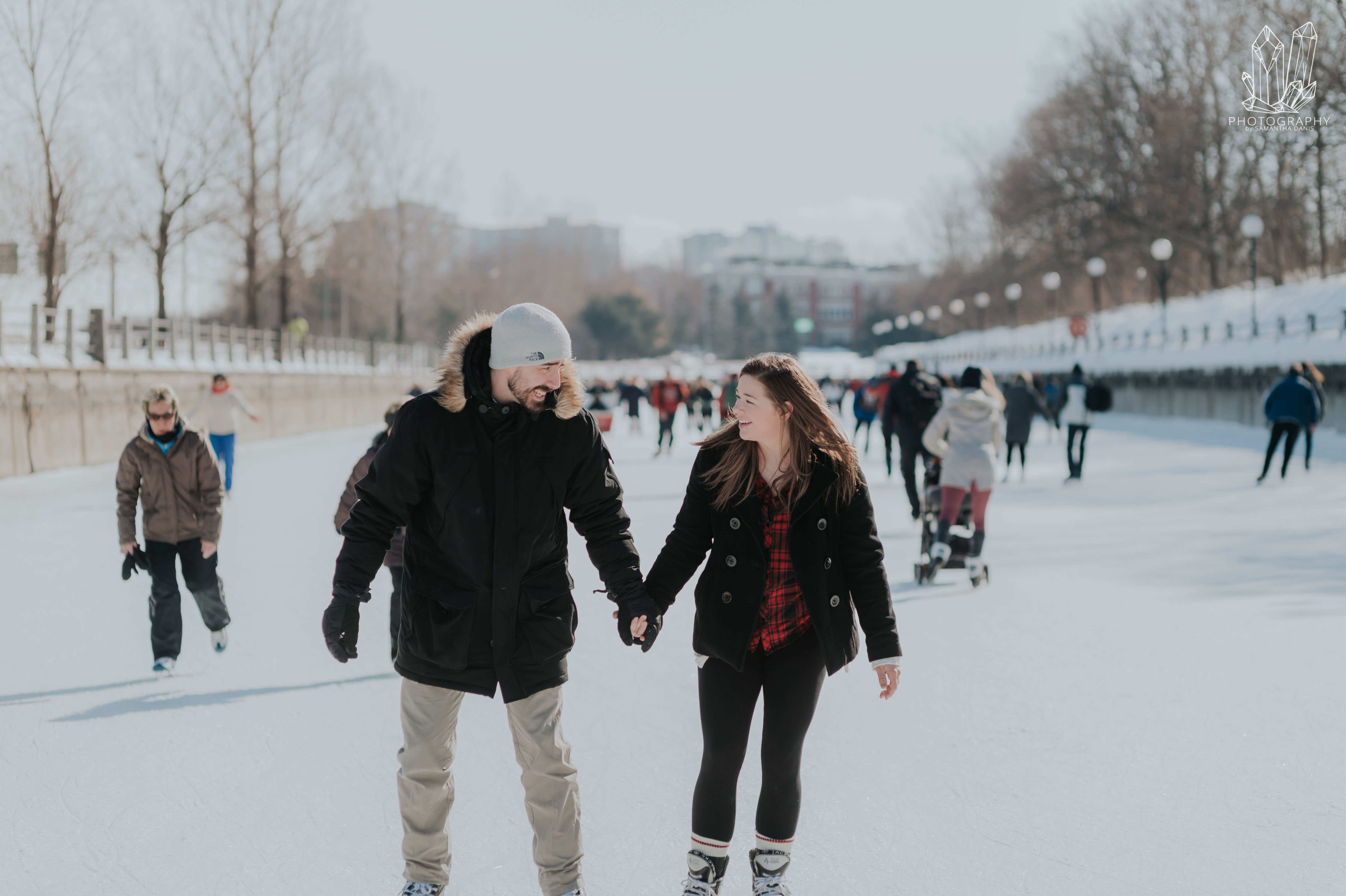 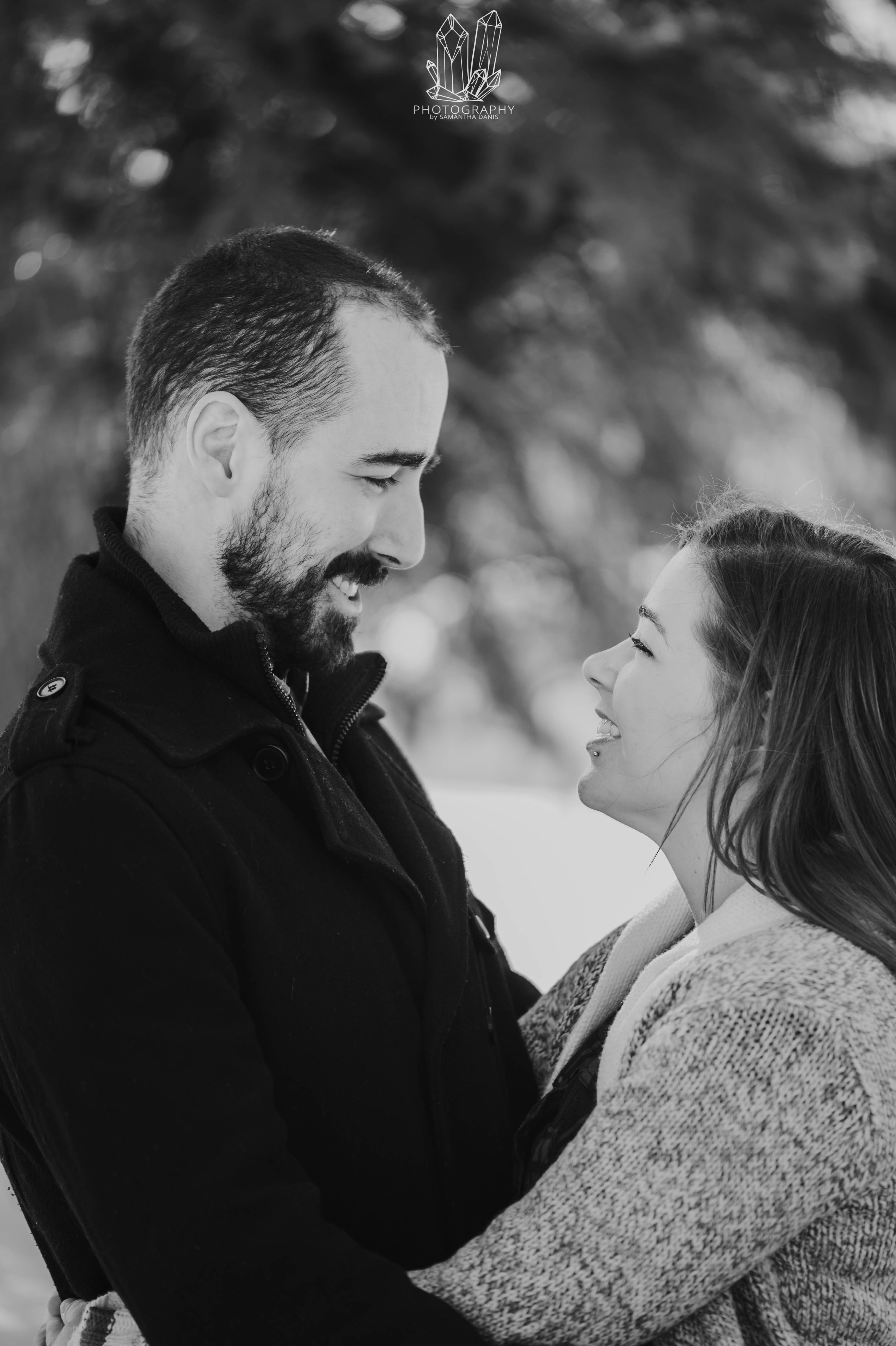 And we ended the session up by a pedestrian path just joking around, doing slow-mo photos and of course we had to get a shot of Sarah’s WIFEY shirt in there. So I told Jon; ” Stand behind her on the snow and point at her with a sassy, Grr Attitude.” To which he replied; ”What kind of animal am I over here?” So Sarah told him to be Tiger and this is what we produced. 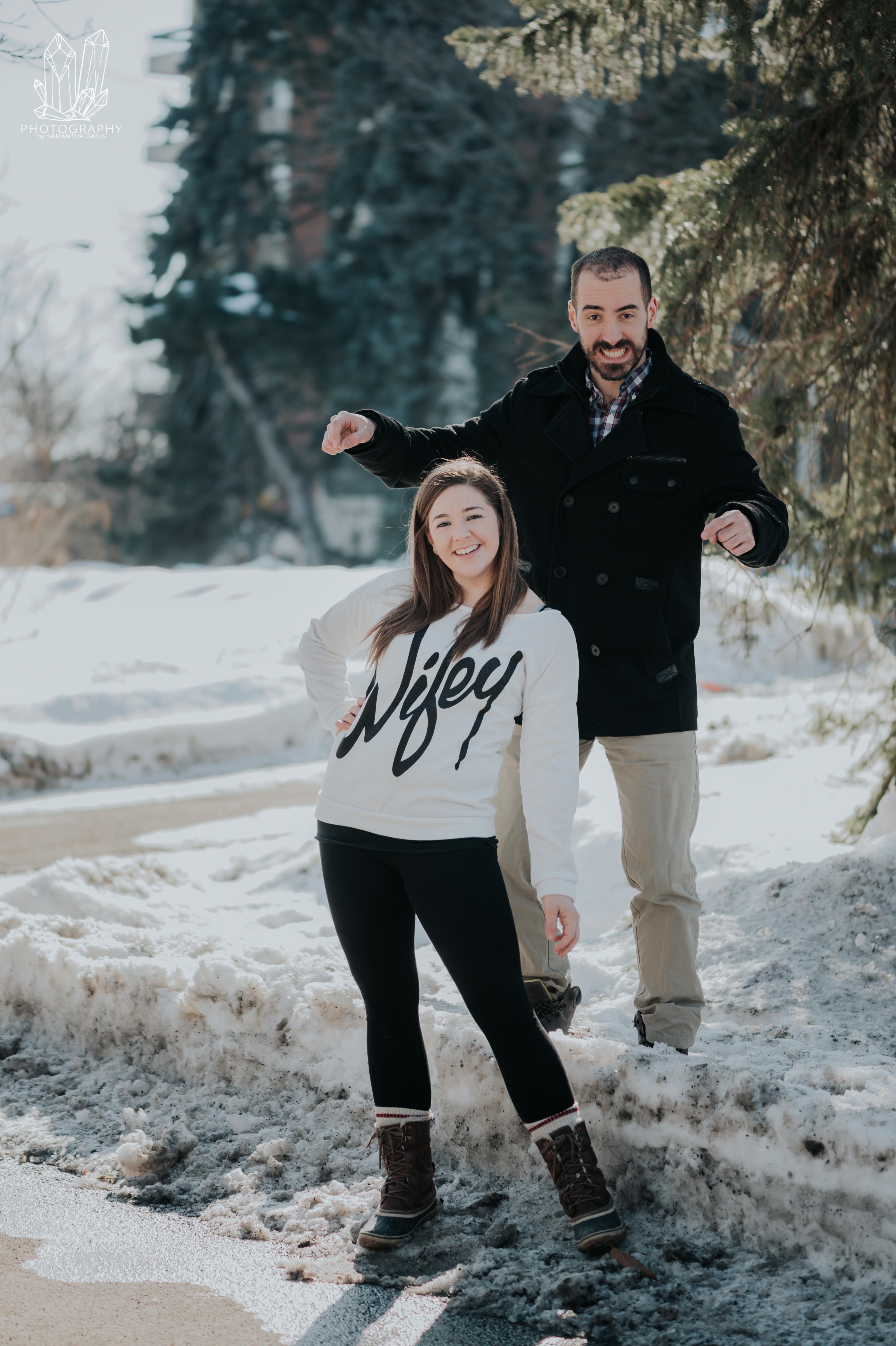 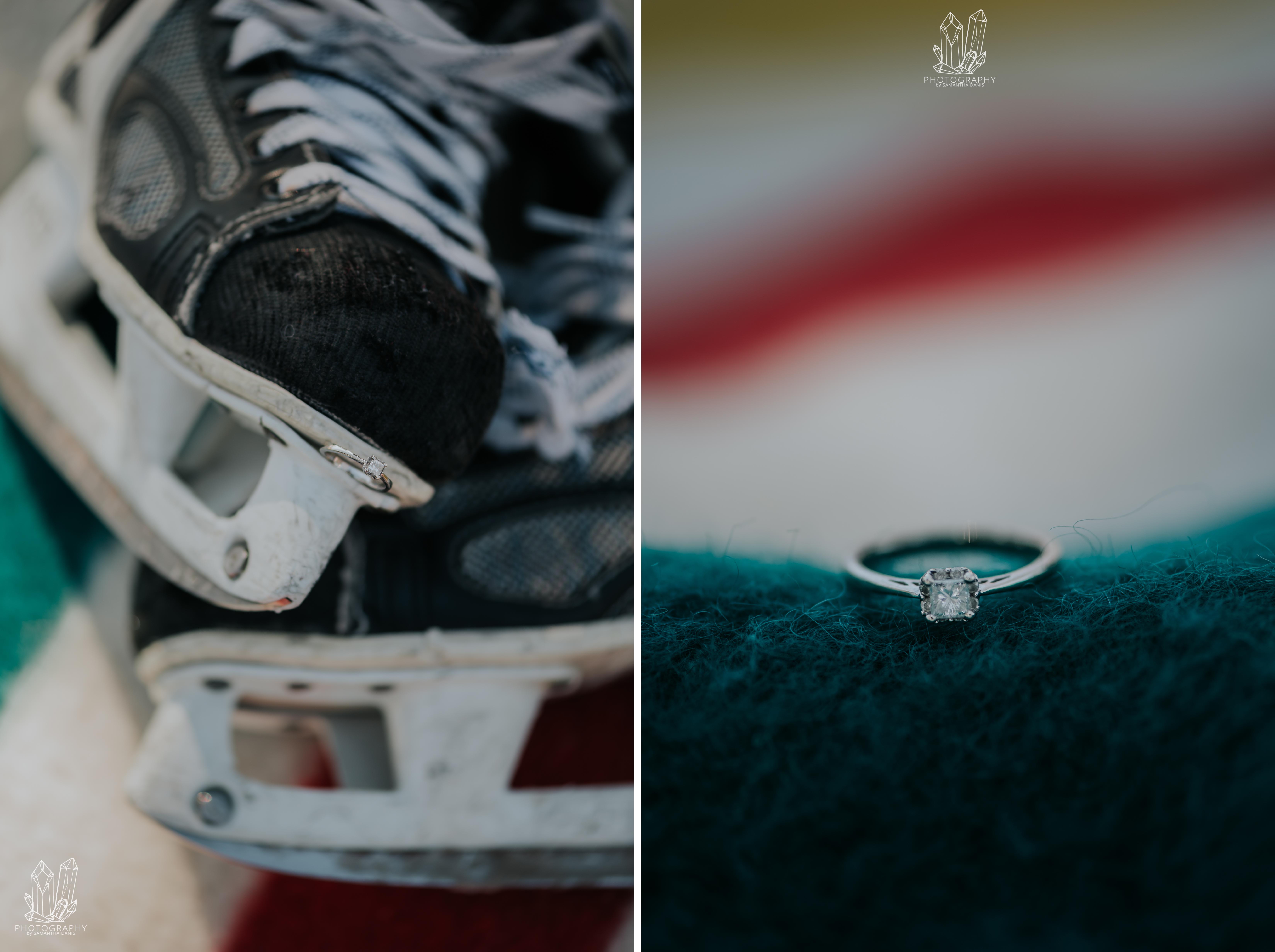 Thanks for being bombtastic clients and of course for being such troopers for this session! Srah, you’re a joy to hang out and talk with and Jon, I’m so proud of you! You guys are going to be awesome on your wedding day xox ♥