I always feel like the weather knows when I have a session planned and when that day come it’s just like, AHHH Not today Sam! Which is kinda what happened with my initial date for Lisa & Devin’s engagement session. Although the actual hour we were suppose to shoot the sky cleared up and BAM it was beautiful. But in the end I think it was meant to be that we waited. Tuesday ended up being absolutely gorgeous with stunning golden hour light, so I’m totally happy we pushed it.

I met with Lisa & Devin at the Downtown Ottawa War Memorial which has sentimental value for Devin as he trains the sentries that guard the Tomb of the Unkown Soldier. We patiently waited as people walked by and had a look at the memorial…patiently waited is the key word here folks. Some people were kind enough to wait while others stood right behind my couple as they obviously were waiting to take a photos haha! Gotta love Ottawa. After a few shots we opted to walk over to Major’s hill park to get a few photos with Parliament in the background because as True blue Canadians, it’s kind of a must when you’re downtown. We had the best time just chatting about anything and everything. Lisa is a nurse therefore I took my moment to ask her about my leg pains I’ve been having to which she gave me solid advice, while Devin and I talked about army stuff as my boyfriend is also a member of our Armed Forces which makes me think that I obviously know so much about it (not so much though). Anywho, we spent the evening chasing the light which is my favourite thing to do. Early on, to get them comfortable in front of my lens, I asked Devin to whisper something in Lisa’s ear to get her to giggle. Which worked as I could see them both burst out laughing in my camera which made me ask what he told her. She says; ”She asks you to whisper something and the first thing that comes out of your mouth is Fart?”. I just about died laughing. To be fair though, it worked so I have to give him props for that one. We continued our search and we found a beautiful patch of purple flowers with the sun shining right in the background so we opted to stop there. Funny enough, there were people laying down in the grass a few feet away from us… with a baby stroller… with a cat. Oh the things you see.We ended our session with a walk up onto Samuel De Champlain Lookout where we jumped the fence to the closed off area to gaze at the sunset. Read past the photos for a blurb of how they met and how Devin proposed xo 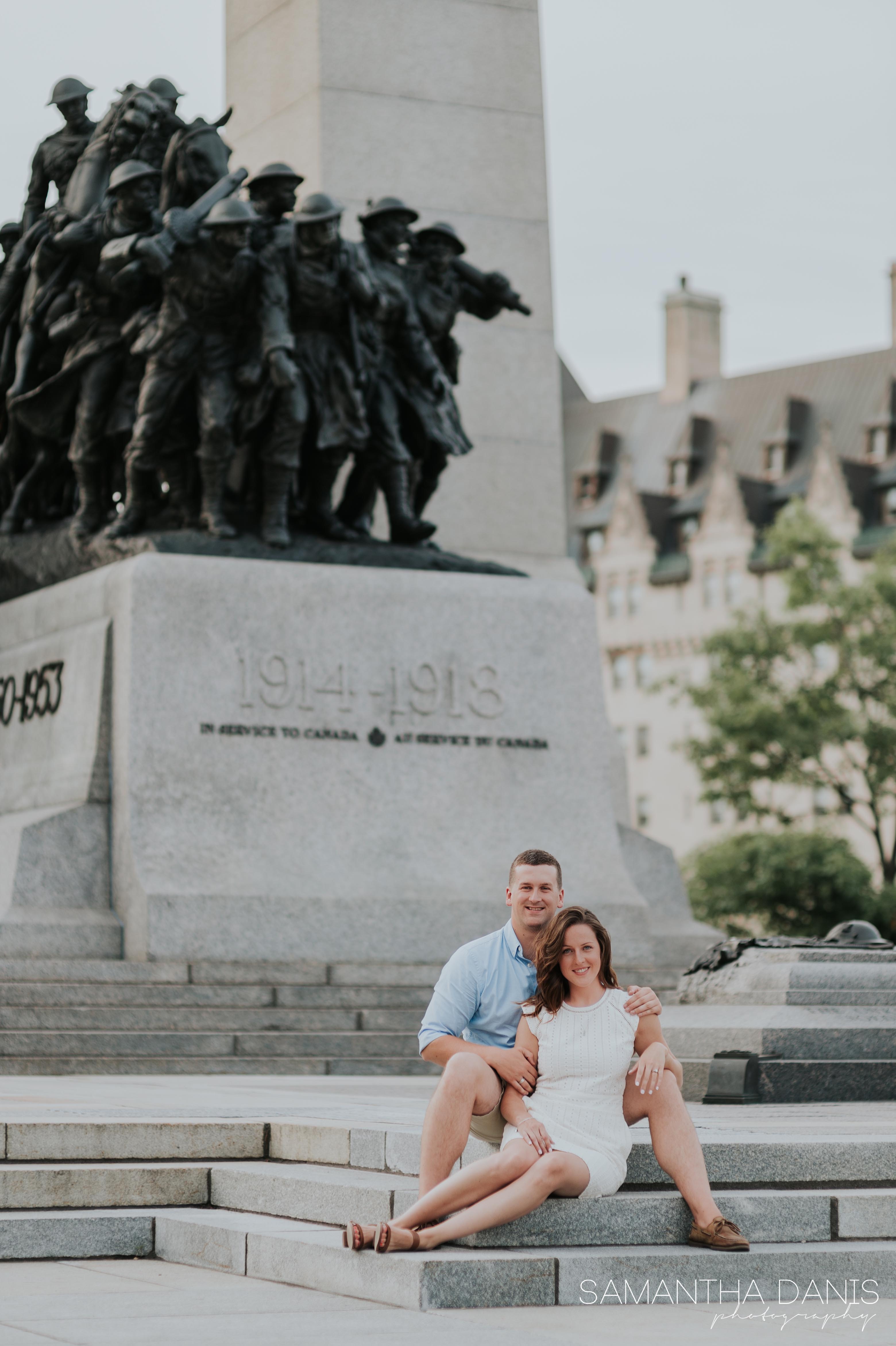 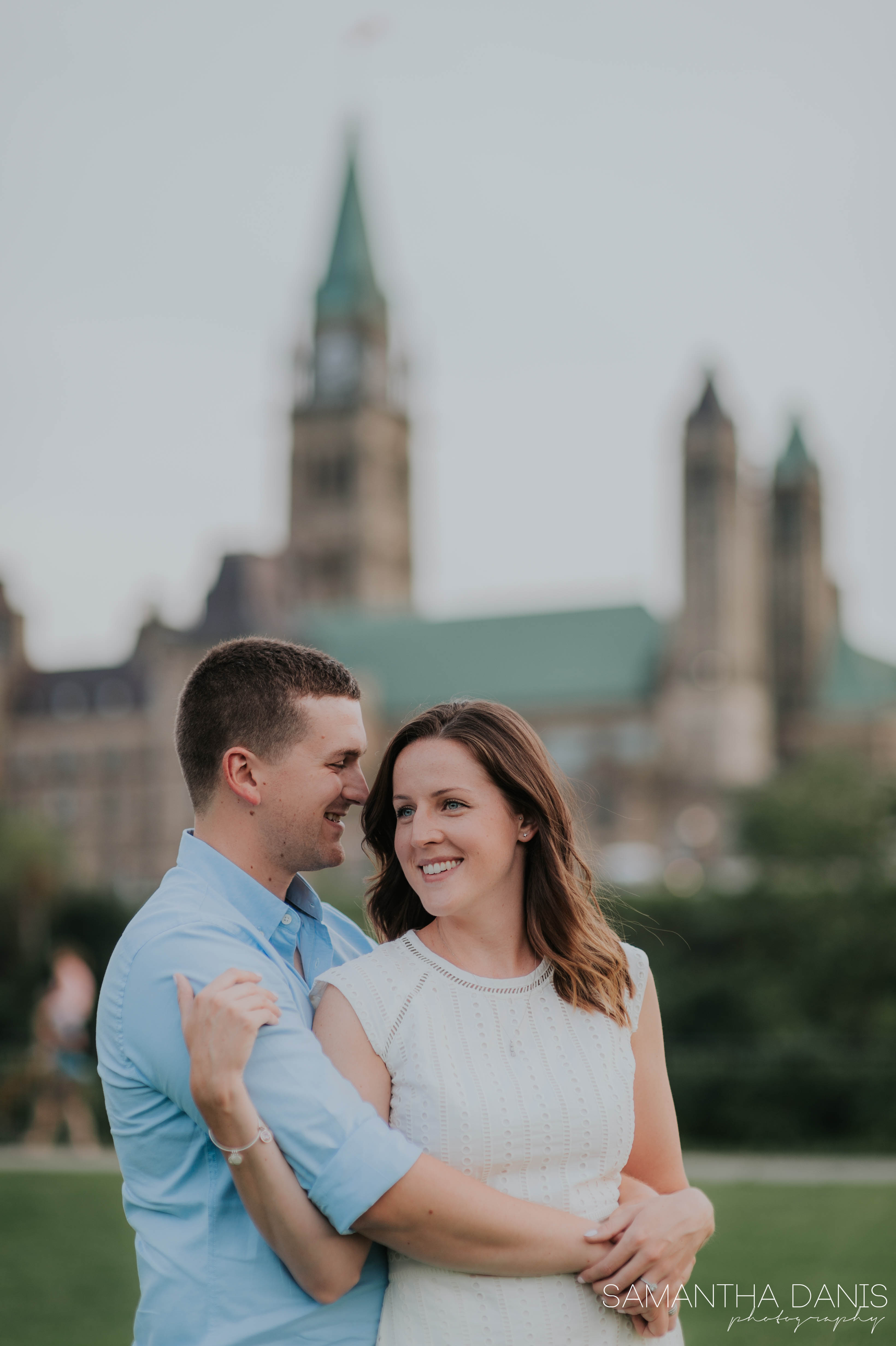 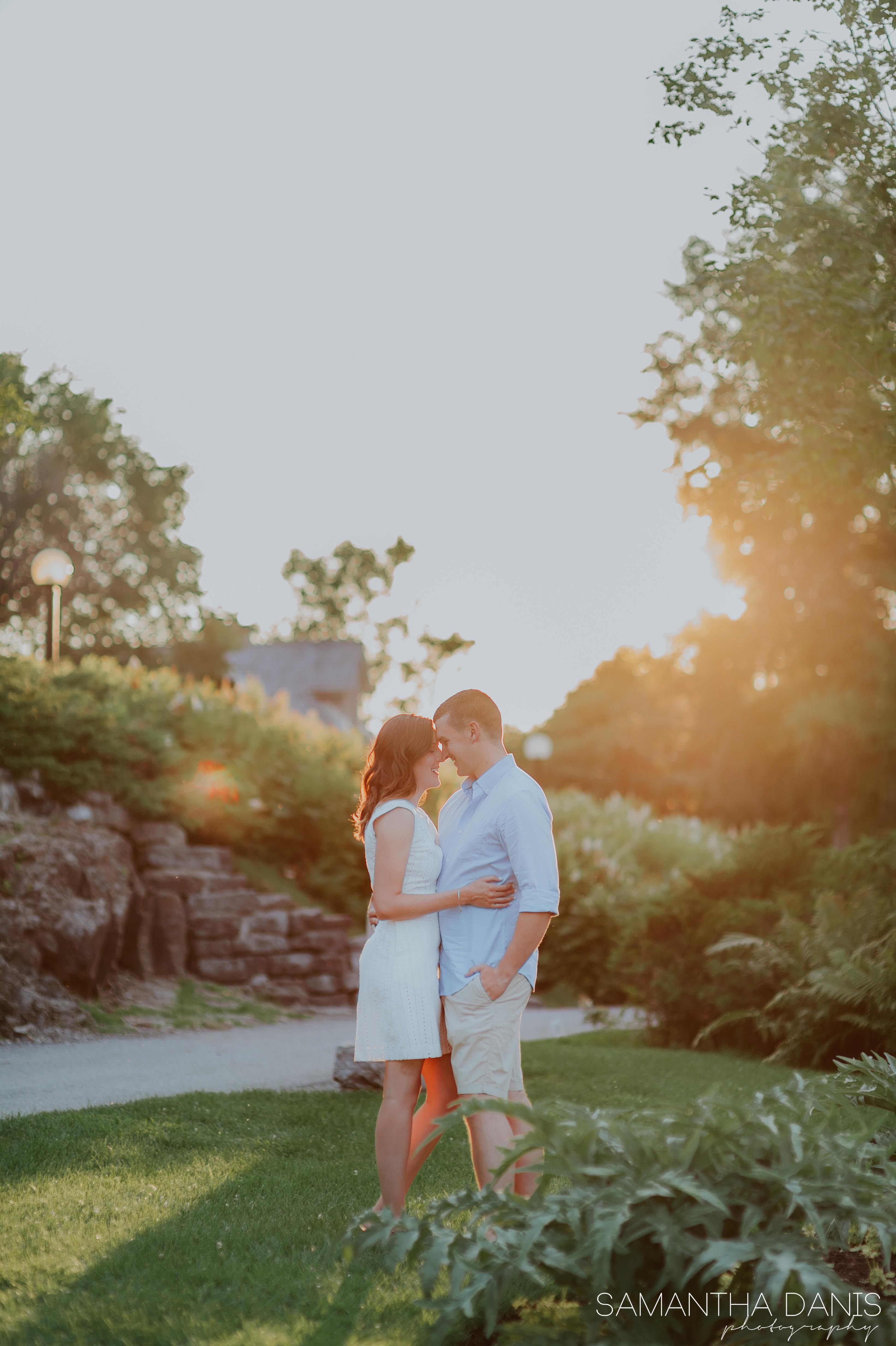 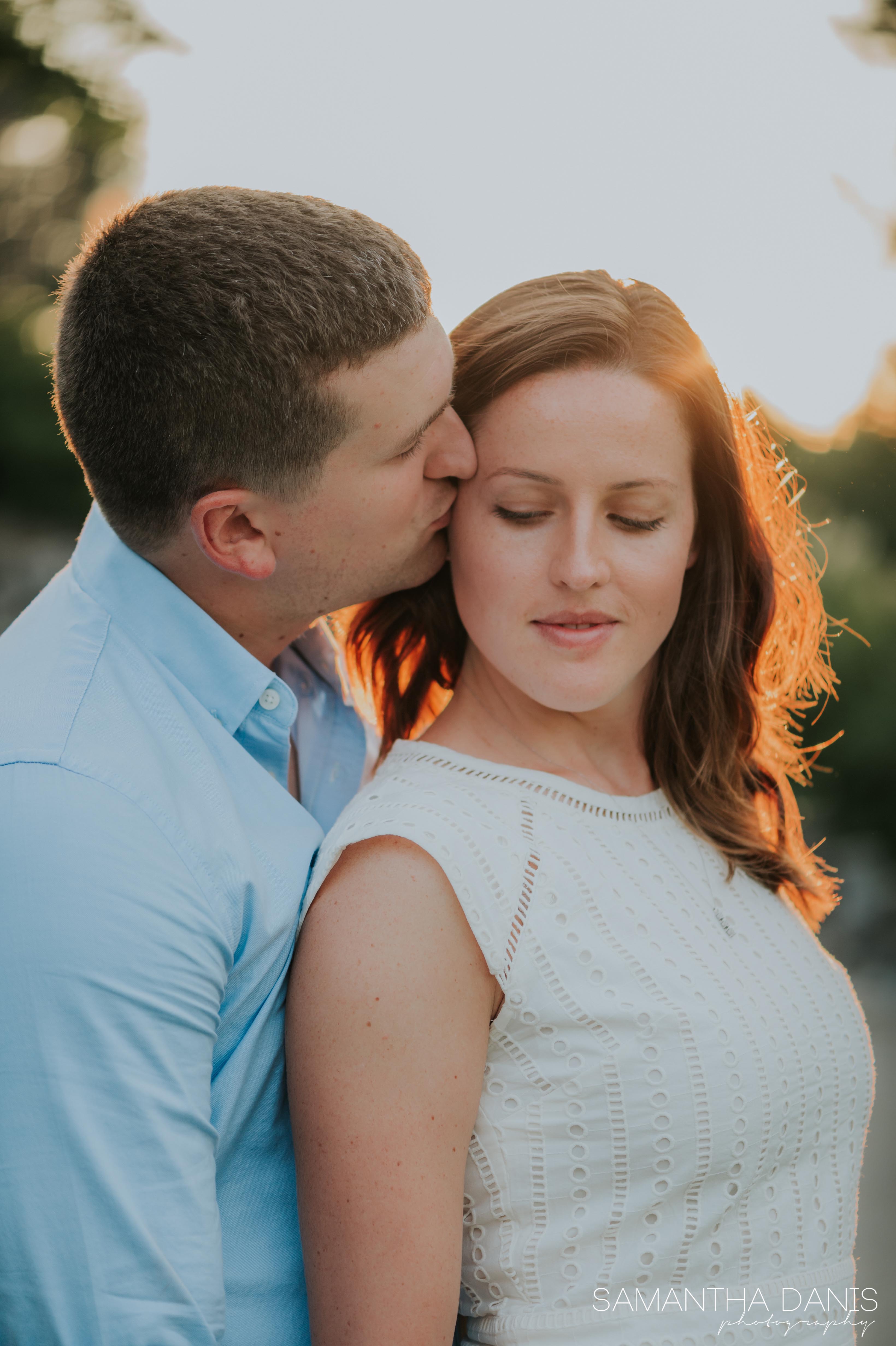 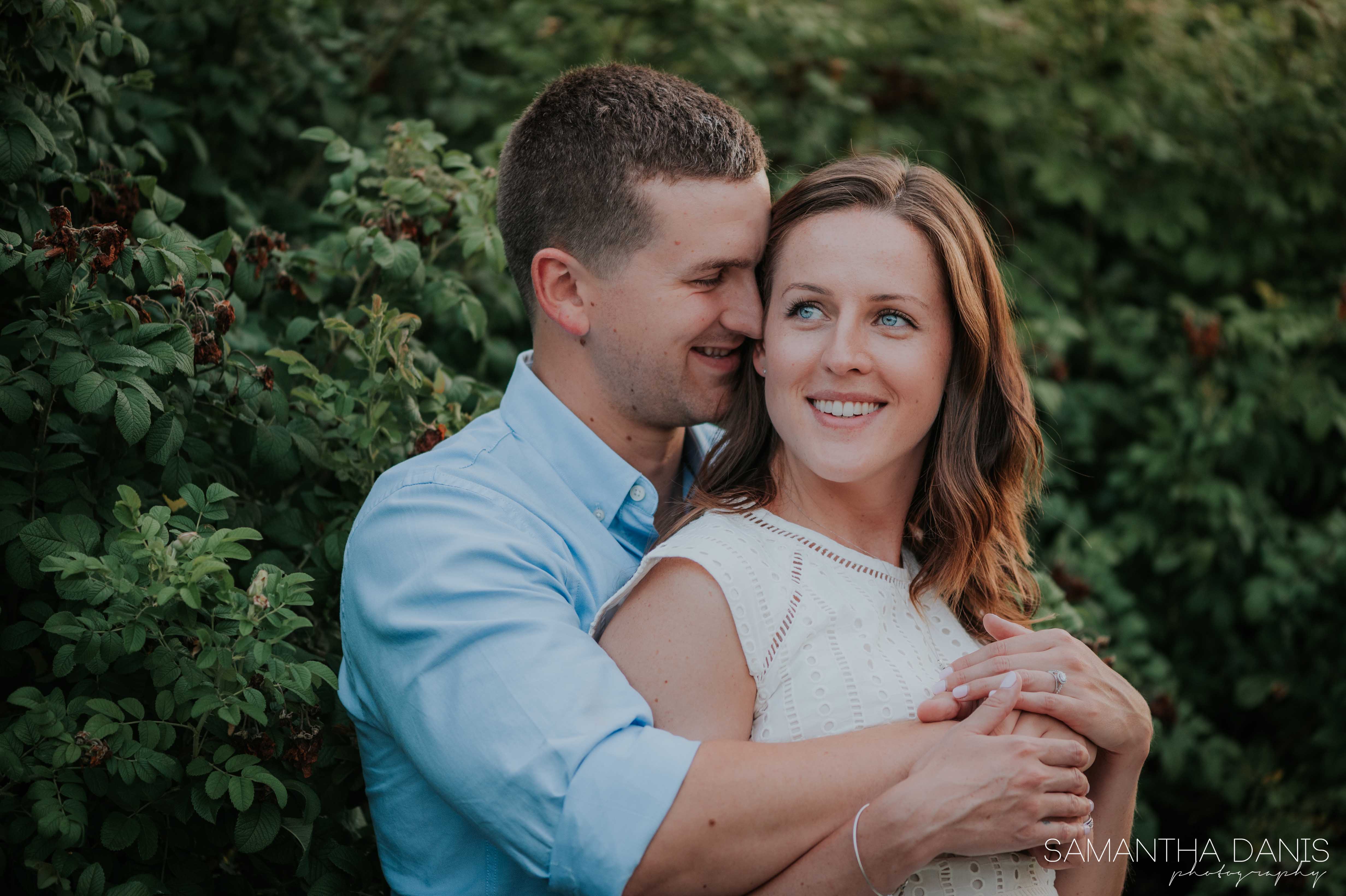 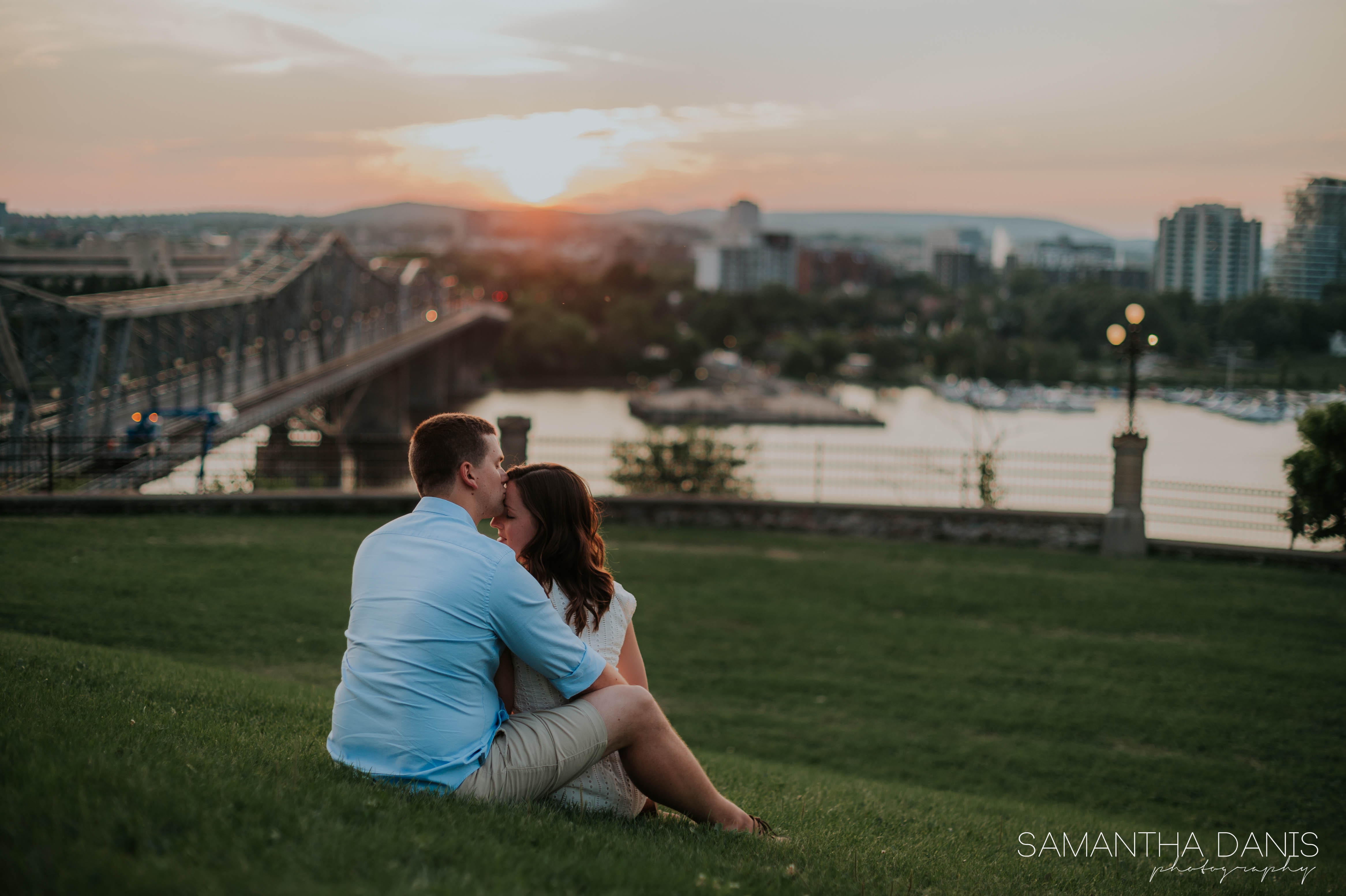 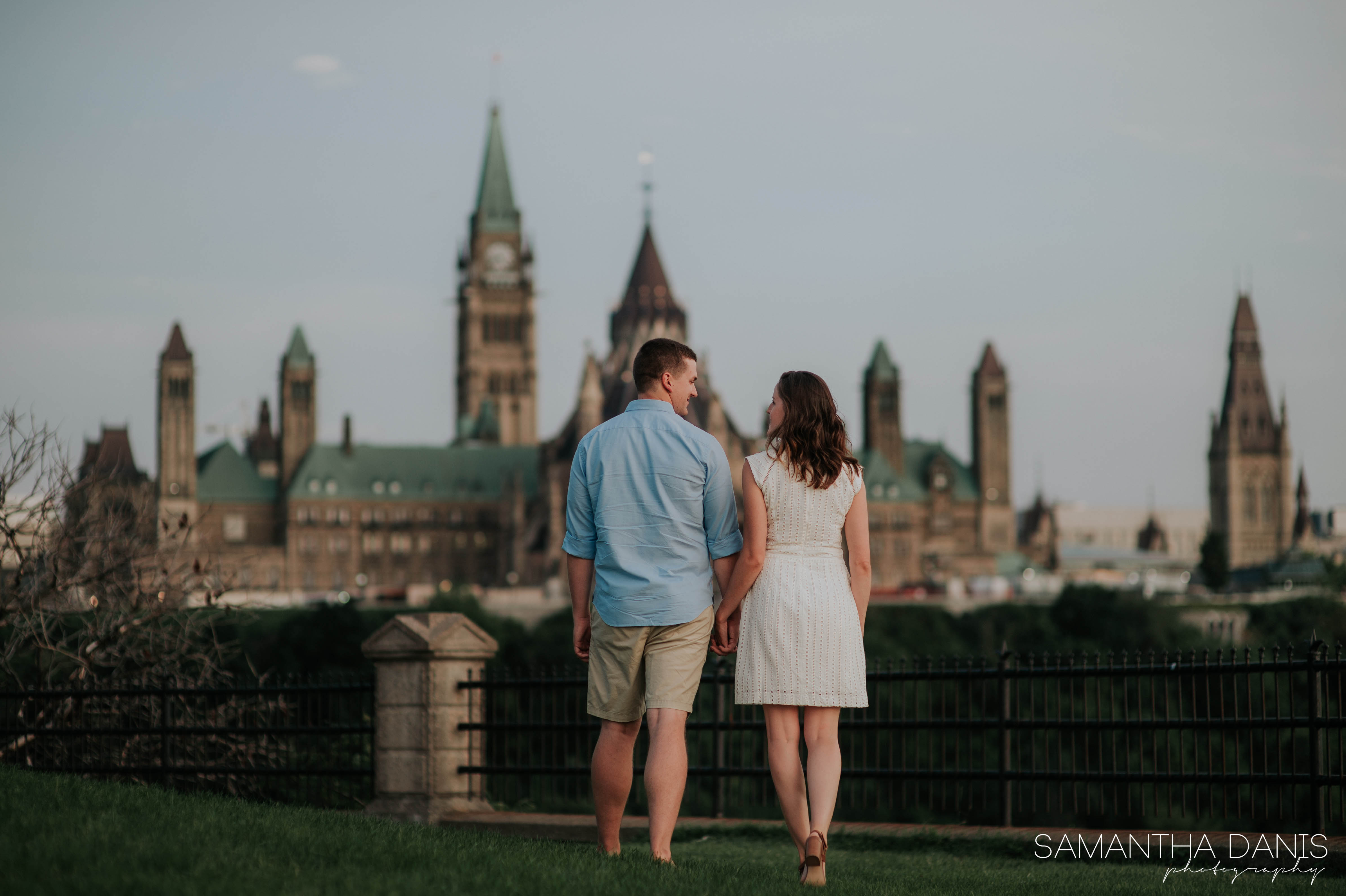 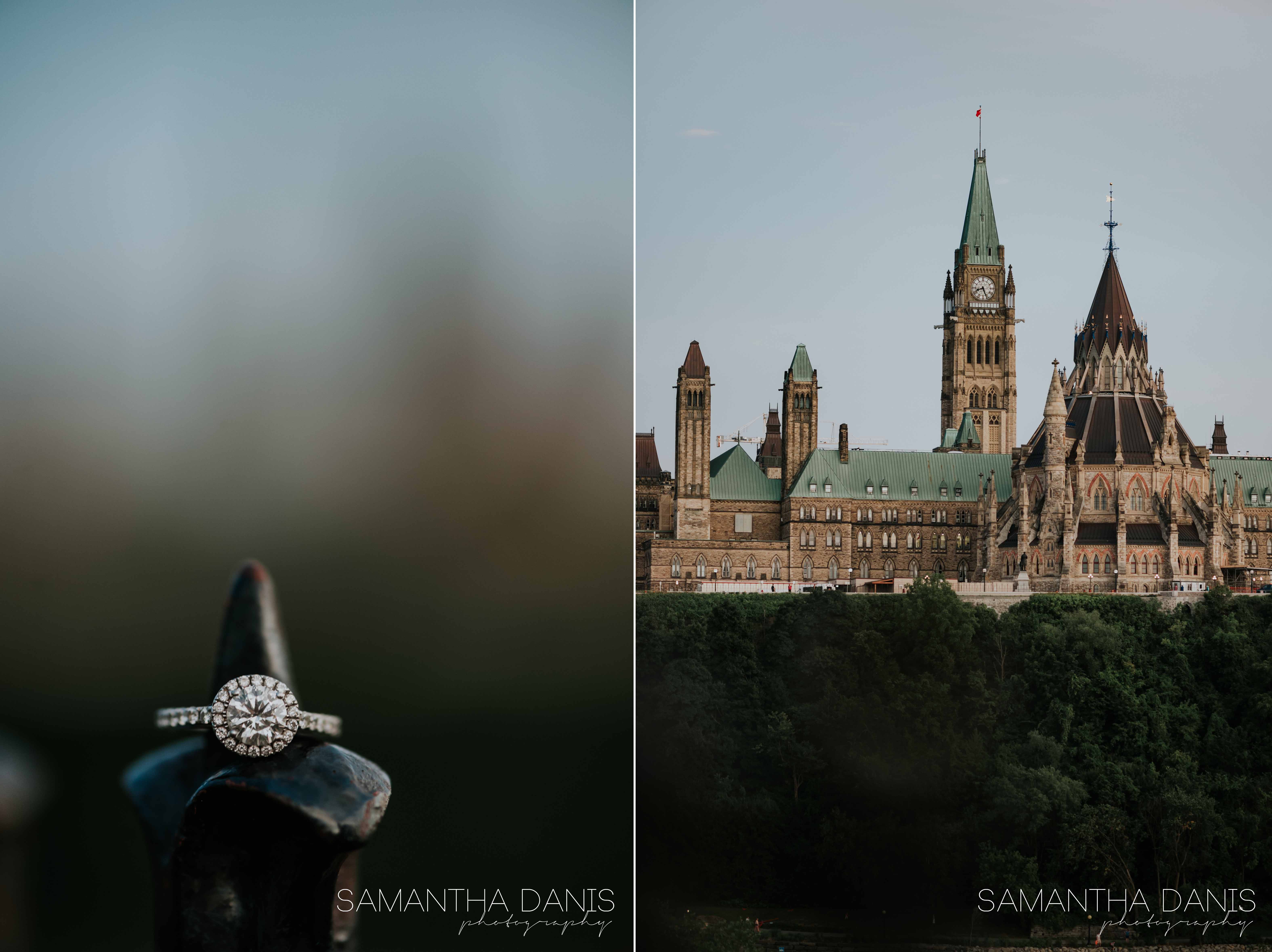 ”Lisa & Devin met back in the summer of 2013. Devin was working as a Ceremonial Guard on Parliament Hill and Lisa as a Research Assistant for the Ottawa hospital. They were both meeting their own respective friends that night for a few drinks. Lisa not really being a party goer wasn’t too keen on going out but decided why not. They all ended up at Whiskey Bar where Lisa’s friends ended up seeing Devin’s friend (whom knew each other) and they figured they would introduce them. Bars are not the greatest place to meet people let’s be honest but they ended up having a great night. As they left the bar, Devin still didn’t know Lisa’s name, so he cleverly asked for Lisa’s number by passing her his phone and saying “can I get your number”? It was then that Devin learnt the name of this anonymous friend.

Lisa and Devin began talking regularly, which became daily, and the rest is history…

The proposal was just as cute. Devin had a whole day planned out for them, Manicures for Lisa, time at the Nordik, an amazing dinner at Milestone’s. All of this gave Lisa the thought that it could possibly happen, until Devin suggested checking out people’s Jewellers while on their walk around the mall after dinner. Lisa’s dream was crushed. As they walked back to their car, Devin made sure they walked in front of Whiskey Bar where he reminisced about this being the place that they first met, and Lisa pointed out the approximate place on the sidewalk where Devin asked Lisa for her number. Lisa quickly turned to walk away, saying “I’m cold. Now let’s go back to the car”. Not once did Lisa do this, but 3 or 4 times! Finally, Devin’s hands on Lisa’s shoulders, he pinned her there, laughing. At this moment, Lisa knew something was up, and Devin quickly started to tell Lisa why he loved her and that he wanted to spend the rest of his life with her (cue the tears), then he got down on one knee and popped the question!

… 30 seconds later, after all Lisa could blubberingly say was “are you serious?! is this real?!”, Devin goes… “Well?”