What did your Monday look like? Mine looked like this ↓ Kristen, Rick and I made our way down to Princess Louise Falls on Monday to finally do their engagement session! Kristen had spoken to me about smoke bombs but I had completely forgotten about it so imagine how happy I was when I saw that they had brought a few along, but more on those later. I was also able to meet their lovely dog Talka who had sooo much energy, she really must be getting cabin fever with the way she had the zoomies as soon as they let her off the leash haha. We quickly took a few pictures with her and then let her roam around while I trekked through almost hip deep snow to get some shots of these two in front of the almost fully frozen waterfalls. It was at that moment that Talka decided to come a couple feet away from me and well… yeah, I got it on camera. We couldn’t help but burst out laughing as I’m sure it was a sight to see. After a few more shots down at the falls I realized that we’d be best to switch locations, so we drove up to the trails leading up to Taylor creek. When we got there the trail was completely covered with about 4feet of snow, luckily for us though others had carved a path through (above) the snow and we were able to trek to the little bridge and path in the woods. We hung out here for the last bit of the session, which is where Rick basically decided it was cold enough so he was gonna stay warm with his nice black coat and toque! They walked along the bridge, and at this point I had noticed they would say things under their breath during the session and they finally said it out loud… Apple, bananas, money etc etc. I was dying of laughter, what, why were they saying these words? Apparently Kristen had googled what to do or say to make you genuinely smile in photos and it gave her a list of words to repeat, and IT WORKED! If anything it had me in belly giggles while I was shooting which was awesome. After some more laughter, nuzzling and chatting we decided it was smoke bomb time! So these smoke bombs are awesome to play with whether it be during an engagement session, maternity session or even wedding. The only thing is that depending on the wind, they can be pretty tricky to work with. They’re unpredictable so you kinda have to go with what ever it gives you. The first one was great, went right behind them and then enveloped them and made everything smokey and romantic. But the next two, well one was a dud and the other one was just wild no thanks to the wind. It went in the complete opposite direction then the first one did, so I quickly made Kristen and Rick hop over to the opposite side of the rocks and then WOOPS just like that the wind blew the smoke the other way again. They were just running around trying to get some of the smoke before it just vanished. They had two more, one which ended up being this gross looking yellow, and a gorgeous green one which unfortunately lasted two seconds thanks to the wind. We opted for a couple more cute shots and a nice detail of the ring and decided to call it a day, it was definitely fun but pretty cold so it was time to go. Did I forget to mention genius over here forgot her snow pants so I was waist deep in snow during parts of this shoot, oh the things you do to get the shot :D.

This session was definitely a fun one and it made me really excited for their wedding this fall BUT it was what happened after the shoot that had me laughing the most. As we get to our cars I see a firetruck turn the corner (no lights on or anything so it wasn’t an emergency), I look at Kristen and Rick and tell them; ”How much do you want to bet someone saw the smoke from our smoke bombs and called it in?” They were like nooooo, do you think so. So I waited a minute to see where the truck parked. Sure enough the truck parks right beside the trail entrance and two firefighters come out in their gear, grab a couple fire extinguishers and start to climb the pile of snow. That’s when I ran over and asked them if they’d gotten a call about smoke coming from the creek. To which they replied yes! Of course I had to clear things up with them, told them I was taking photos with smoke bombs and apologized. One of them laughed and looked at me and said; ” Was it for an engagement session? That’s awesome!” The two guys were super nice about it, then a third guy came out and didn’t look too impressed so I thanked them and ran back to my car. Kristen and Rick were smiling and laughing waiting for me to confirm what I had guessed they were there for haha. To the guys in firetruck P53 in Orleans, THANK YOU FOR YOUR SERVICE! You guys were good sports about our session xo 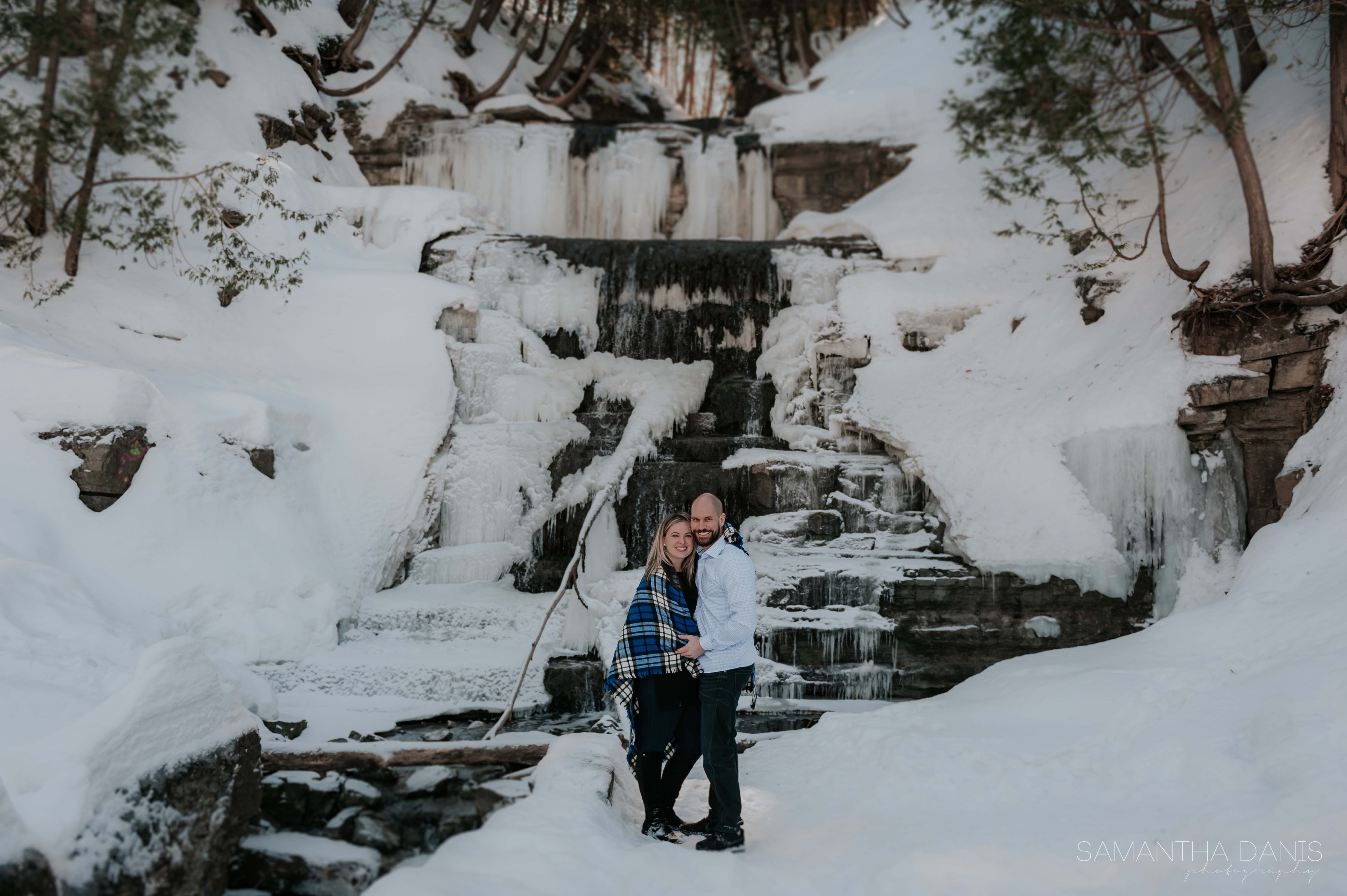 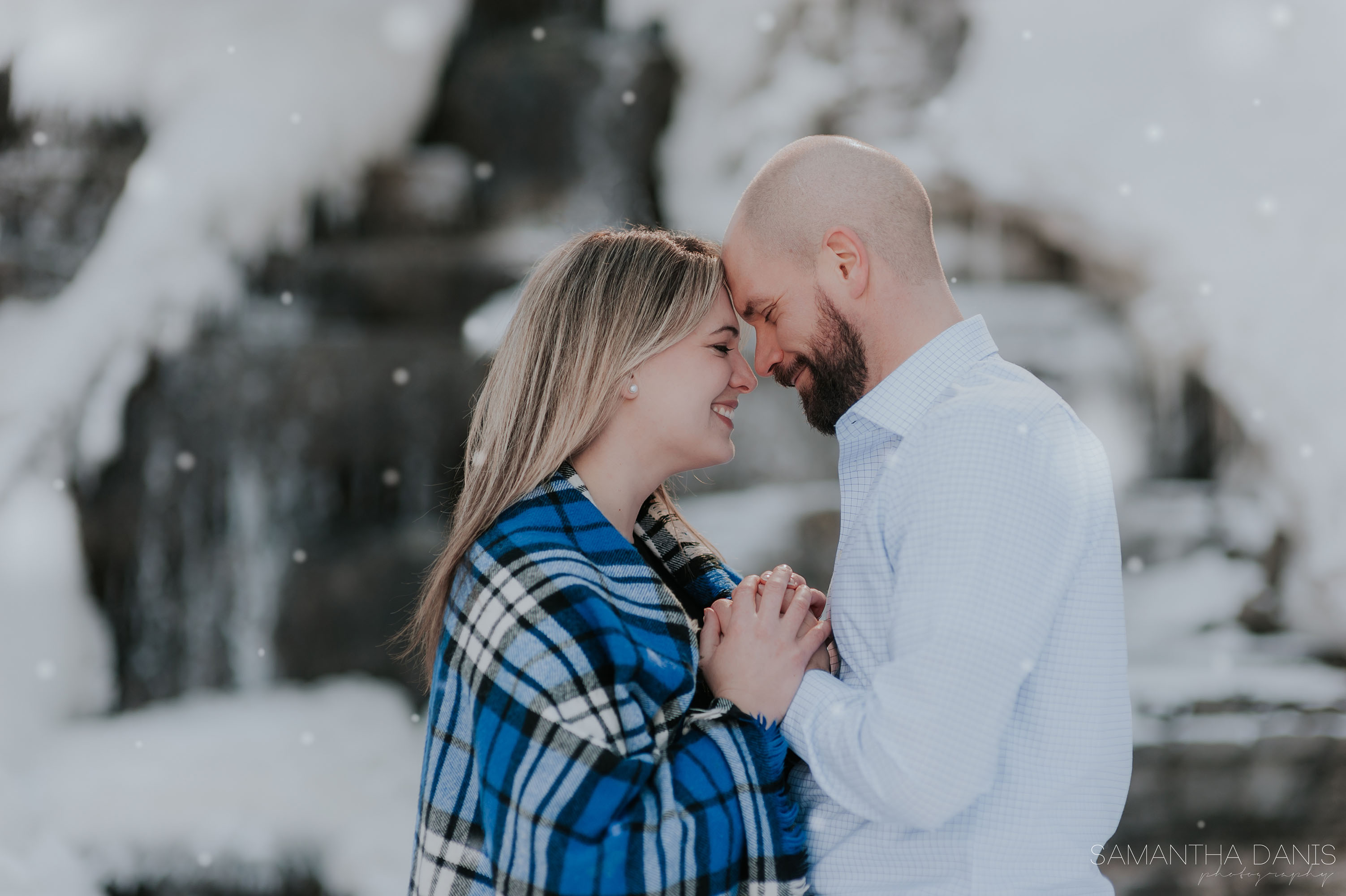 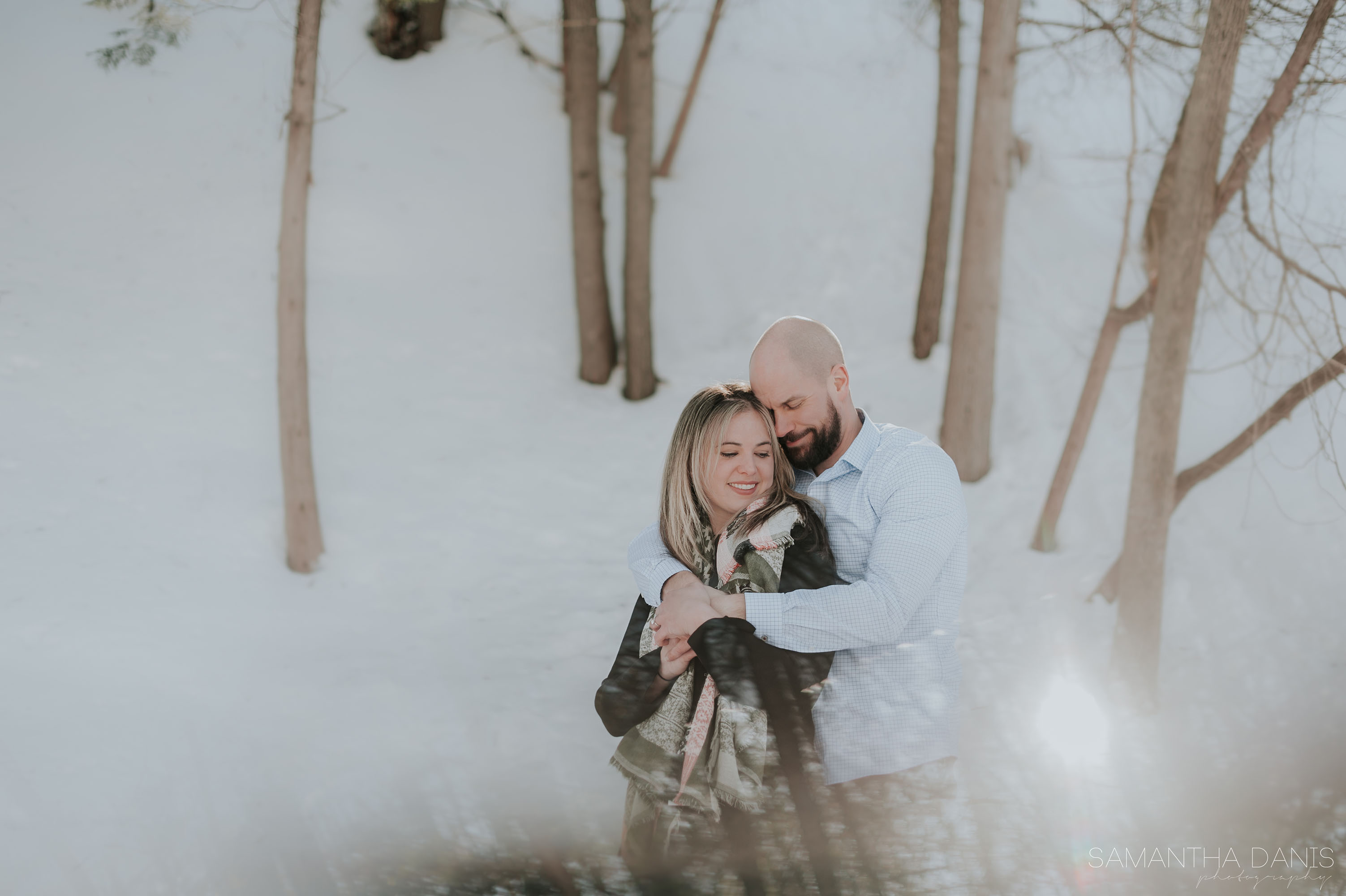 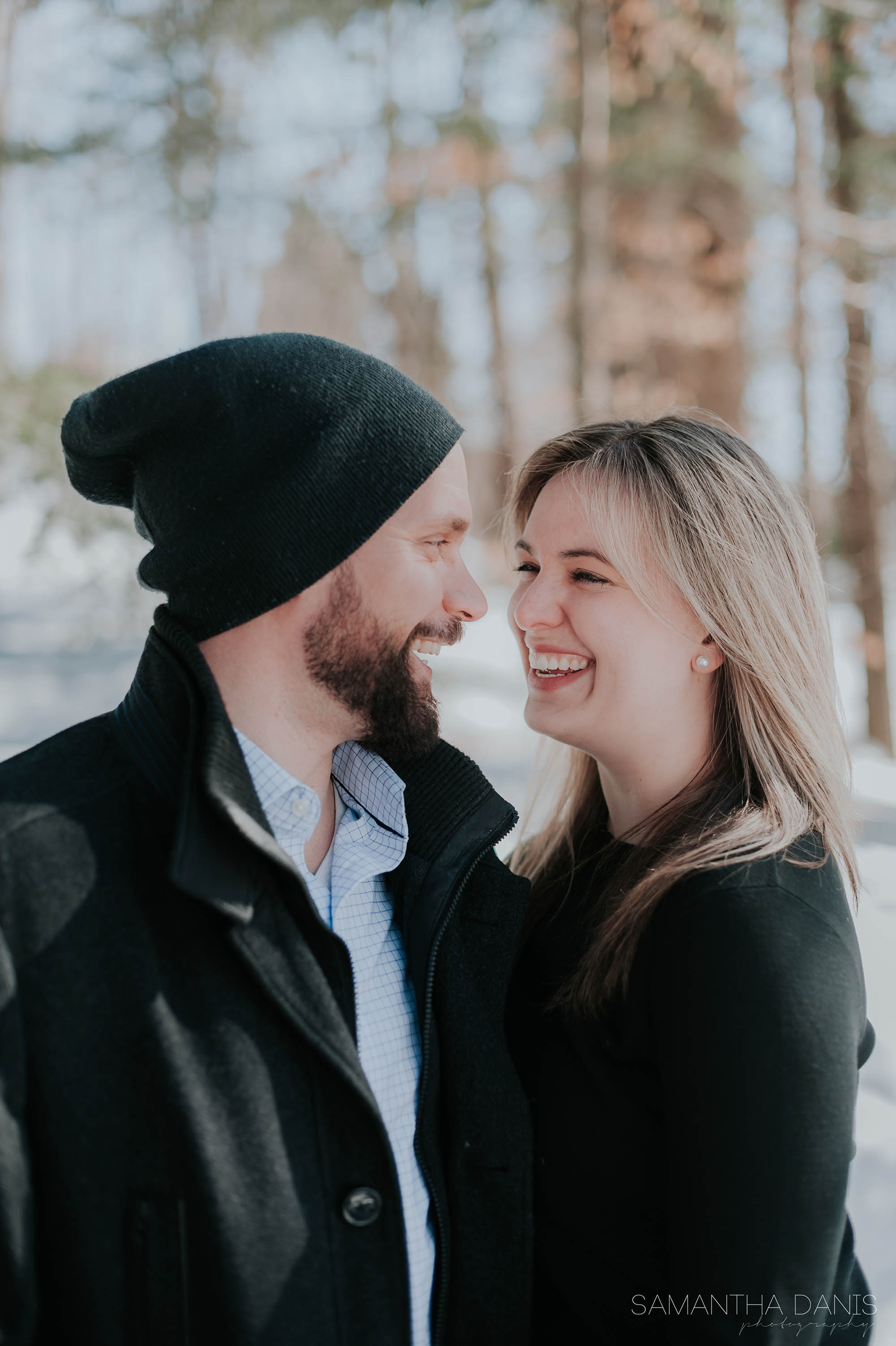 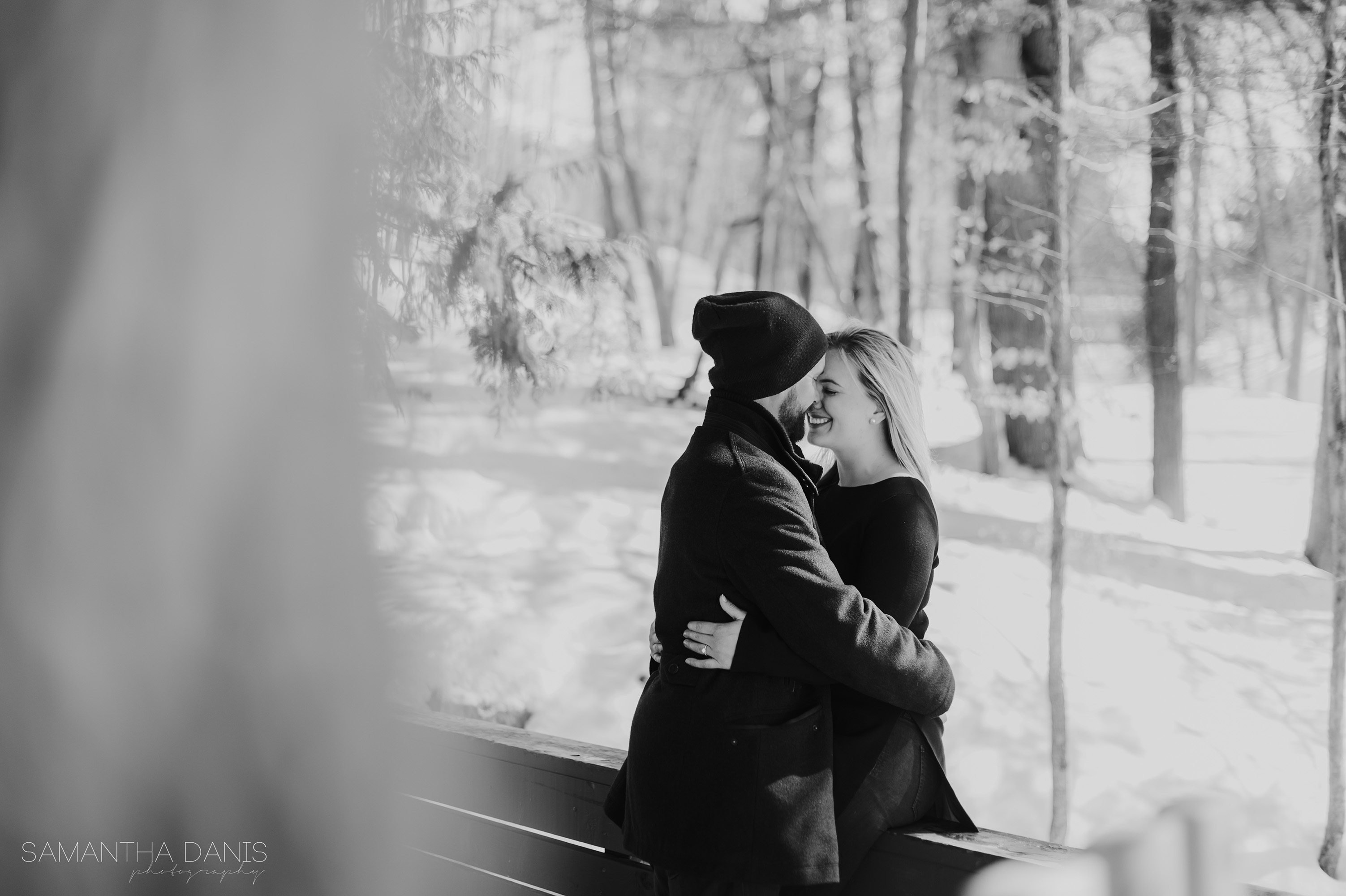 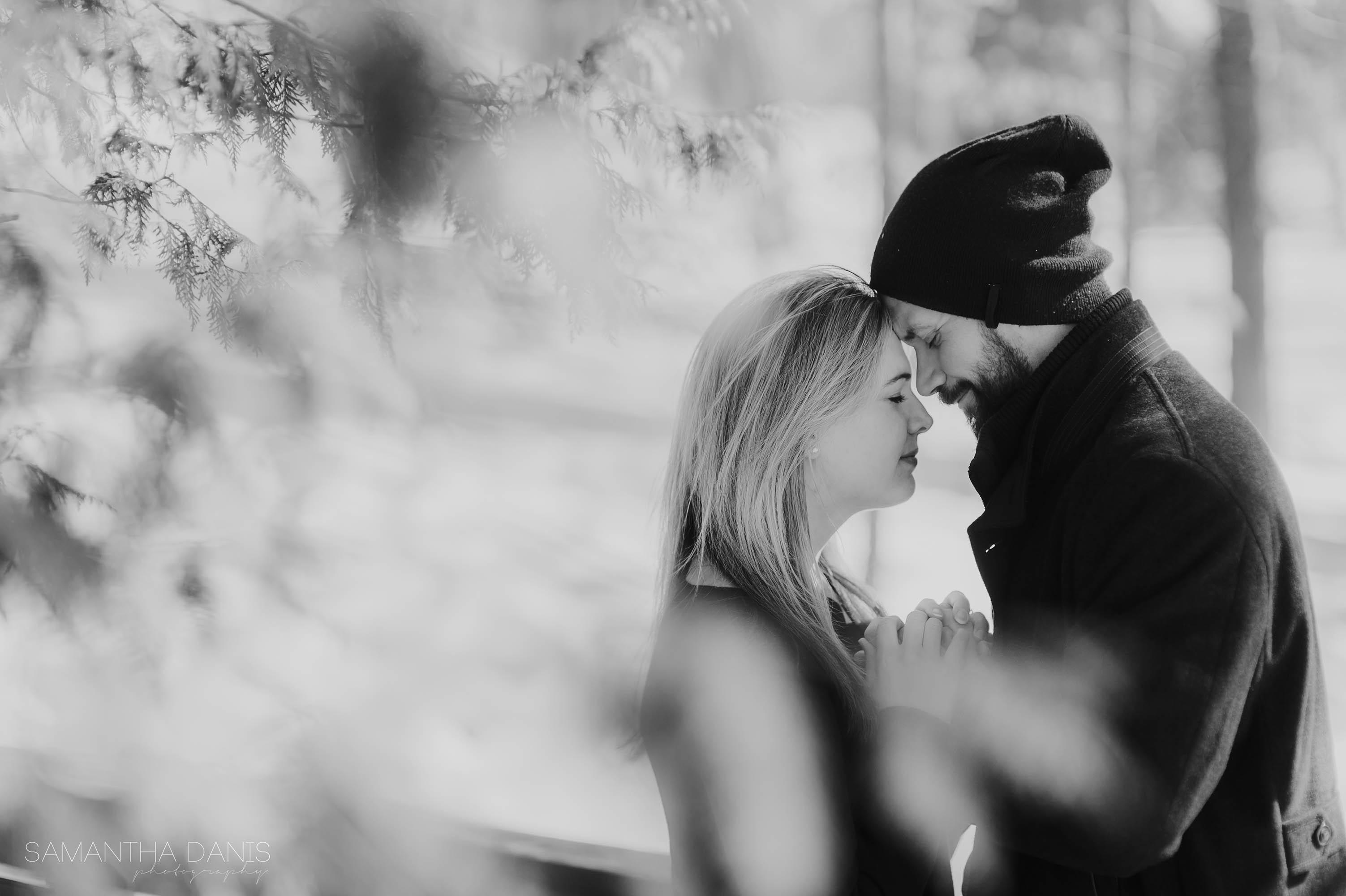 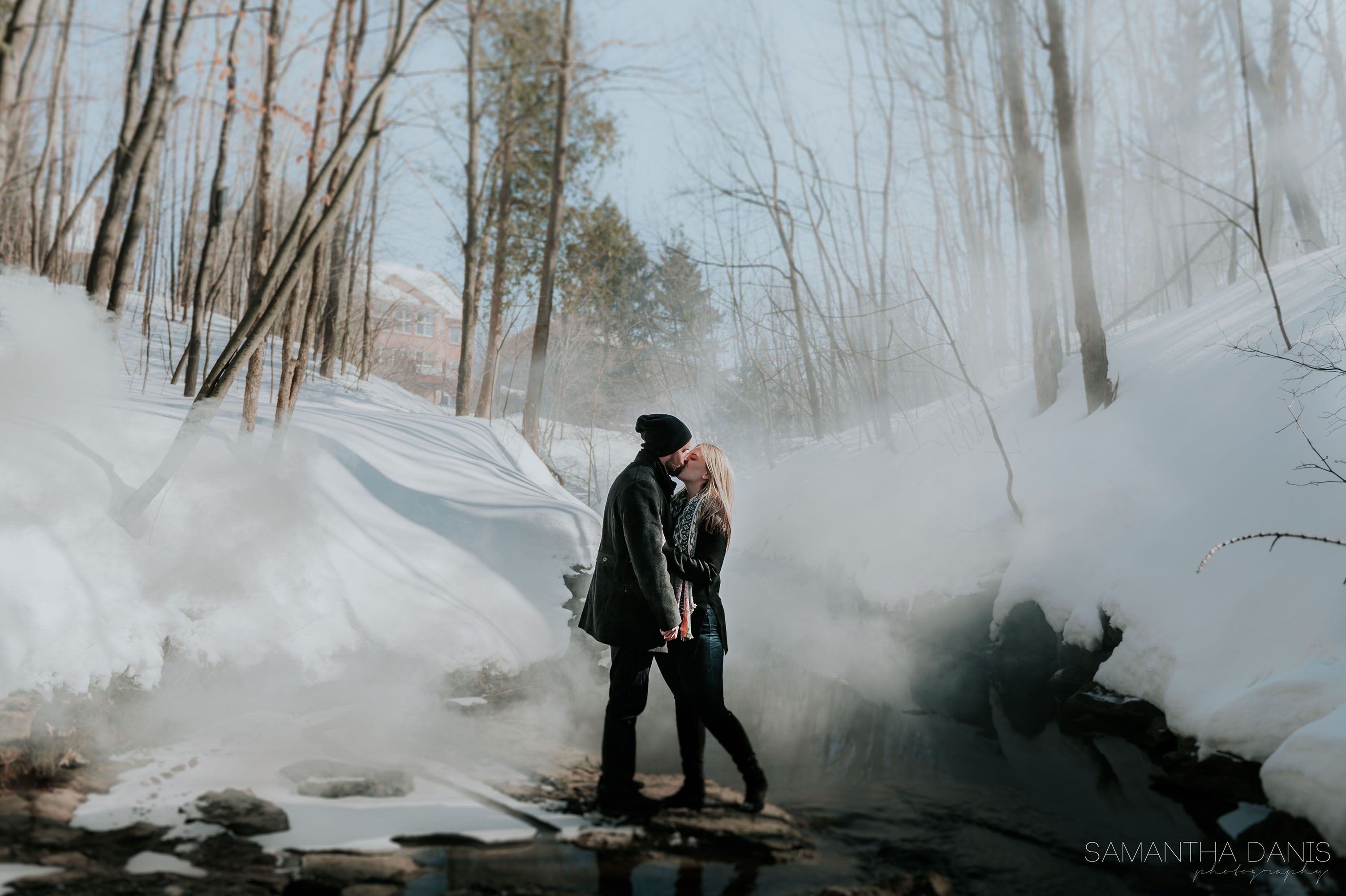 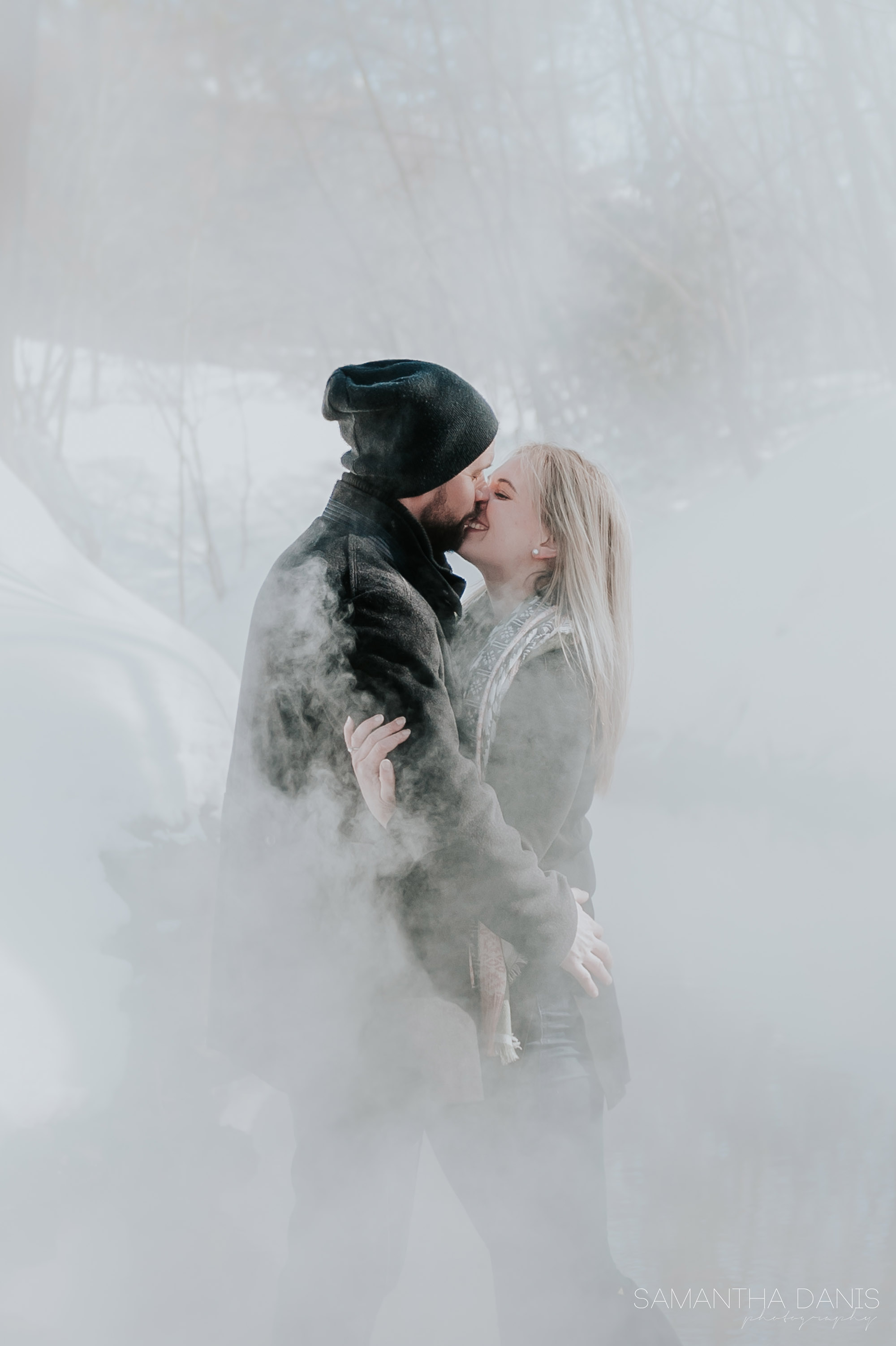 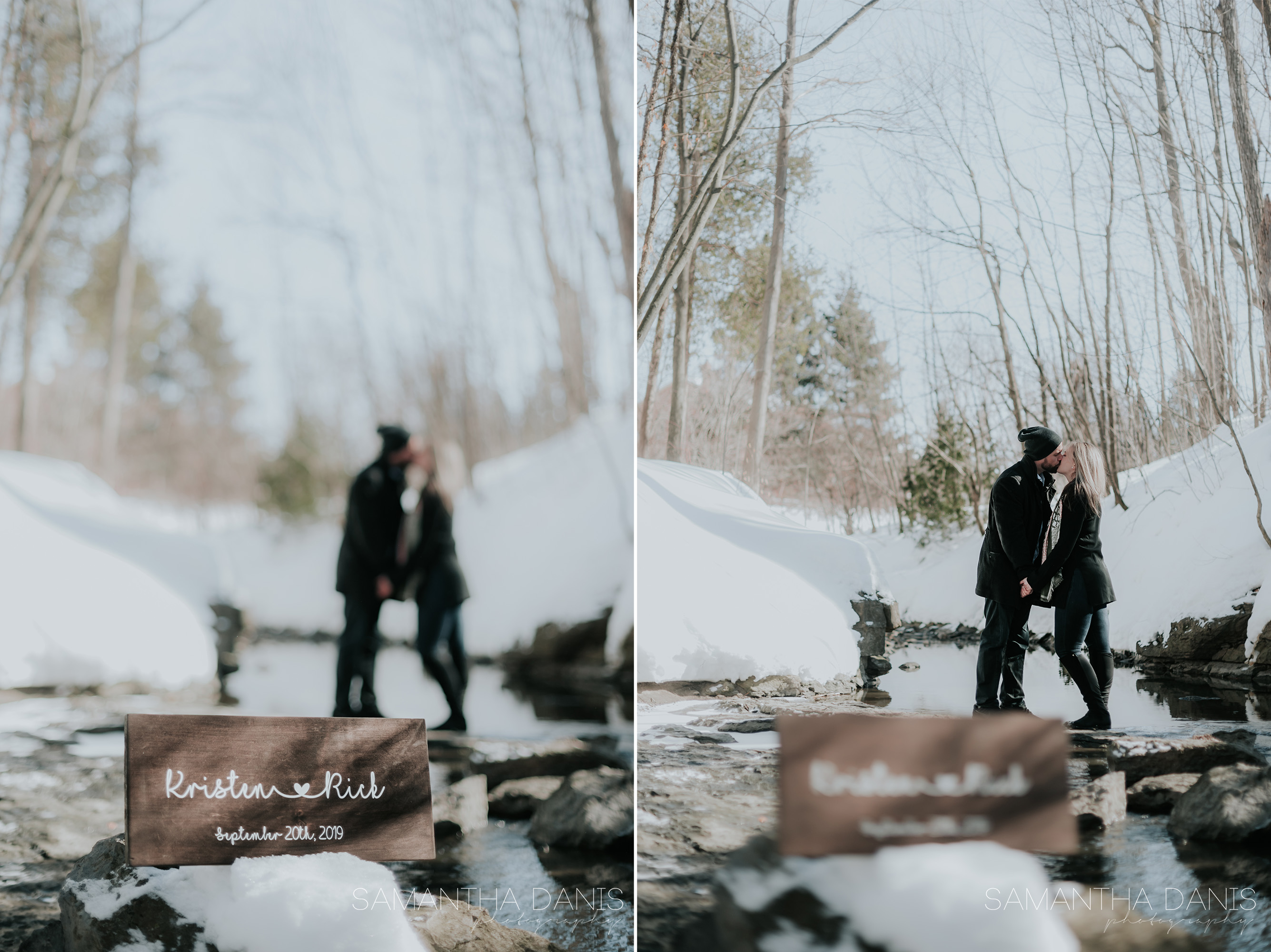 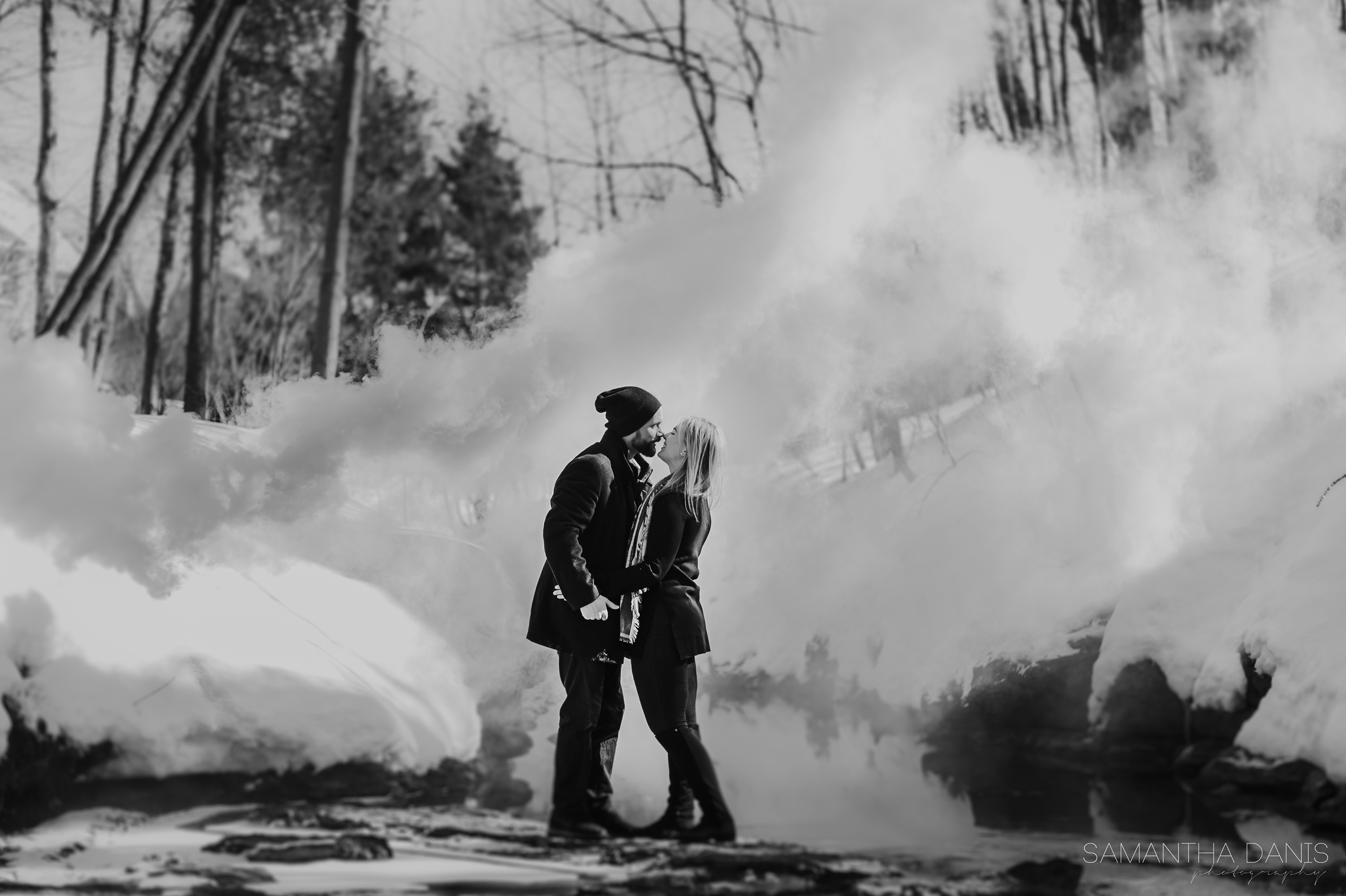 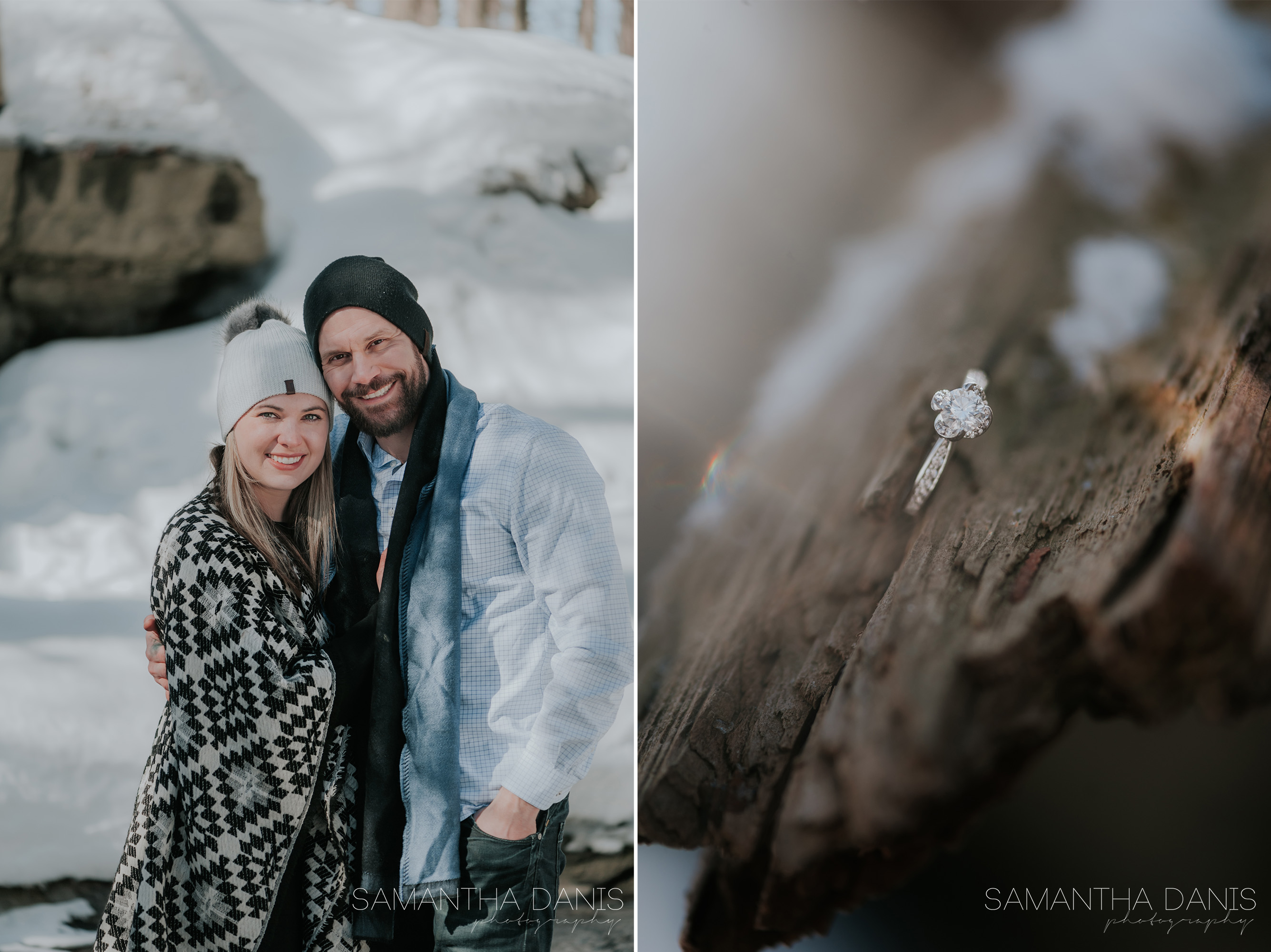