I’m nearing the end of my wedding season but I have so much more to share with you guys, including this beautiful wedding! Kristen and Rick told me straight up they weren’t going to have a traditional wedding in the sense that they weren’t having a wedding party or a sit down meal. Me, I say do your own thing and I was so down to be able to steal them, and only them for portraits. We basically planned their timeline around the ceremony and how many hours they wanted to just be in front of my lens. Honestly this day was so perfect! Thank you Strathmere!

We were worried about the weather leading up to the big day because the temperature had dropped drastically the week before and rain was on and off. But on their wedding day the skies literally cleared up and it was like summer found its way to us again. I found Kristen hanging out in her room so very relaxed, a tad nervous but relaxed otherwise. We talked about her beautiful dress and stunning emerald ring her parents had gifted her for the wedding. And after doing a few details I quickly popped by Rick’s room to say hi. Kristen had texted me that his room number was 16 but when we talked in person she said it was room 17. So I make my way down to room 17, knock and wait for Rick to answer the door. Only Rick had magically turned into a 55year old woman in Bermuda shorts and a pink floral button up shirt. I take a step back and ask her if Rick was available. Welllllll turns out that Rick was actually in room 16 after all. Thanks Kristen ;). Time started to speed up and it was time to get Kristen in her gorgeous blush and Ivory gown and down to her soon to be Husband for their first look.

Kristen was so excited to see Rick that the second I moved out of the way she walked (half jogged) right around to where he was facing. Rick held it together (I really thought he was going to cry) and smiled his biggest smile as he took Kristen in his arms. They were both just staring at each other like it was the first time, the moment they fell in love. They embraced for what felt like a very long time chatted privately and then it was time to get the majority of their portraits done! We were even able to get all of their family photos done before the ceremony! I think my favourite part had to be when Kristen popped the champagne bottle with everyone around her and it just barely flew and sprayed. It was like a pop-flop. Her reaction was priceless. Huge smile followed immediately by s ad puppy dog face. I loved it. 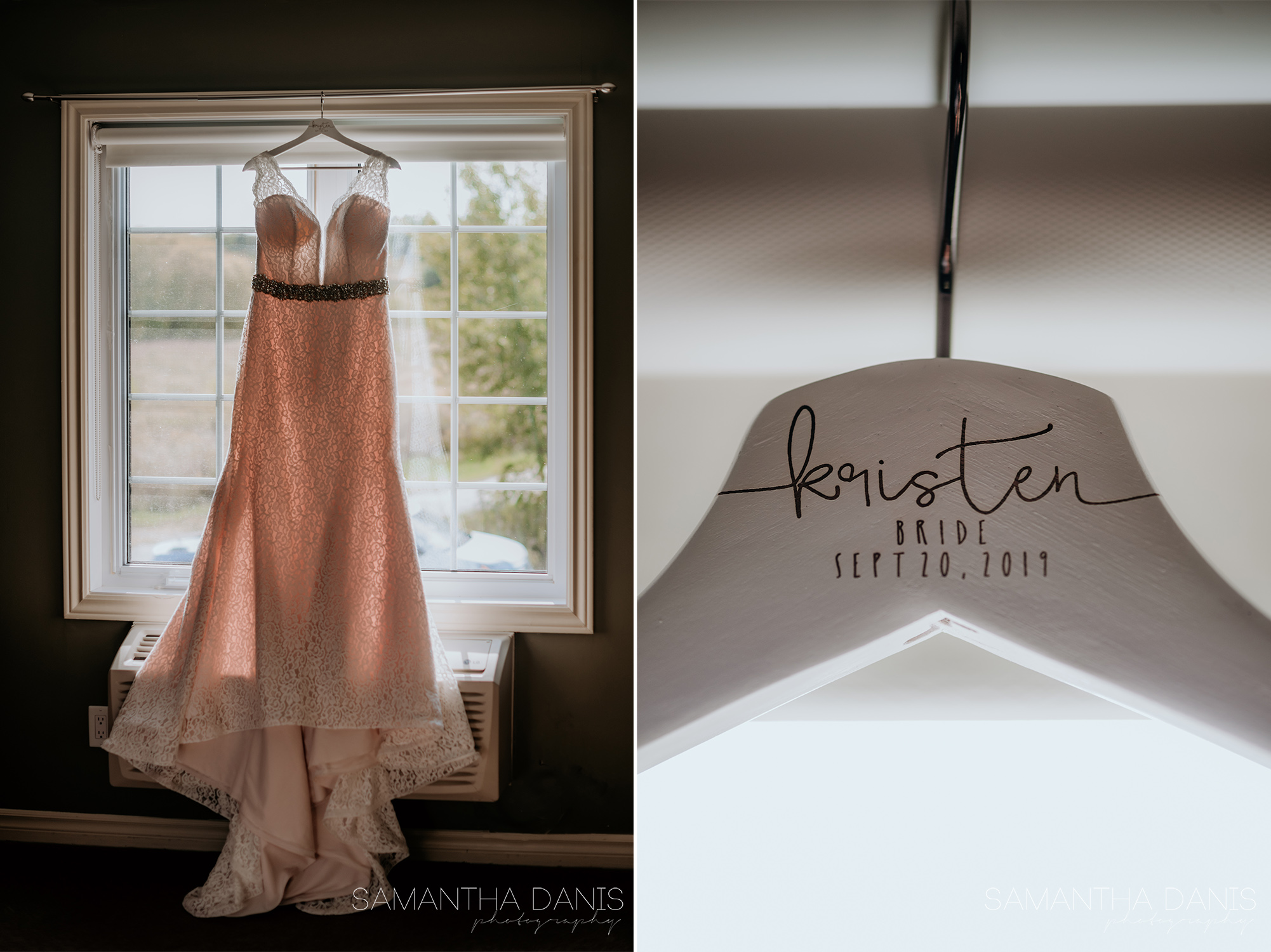 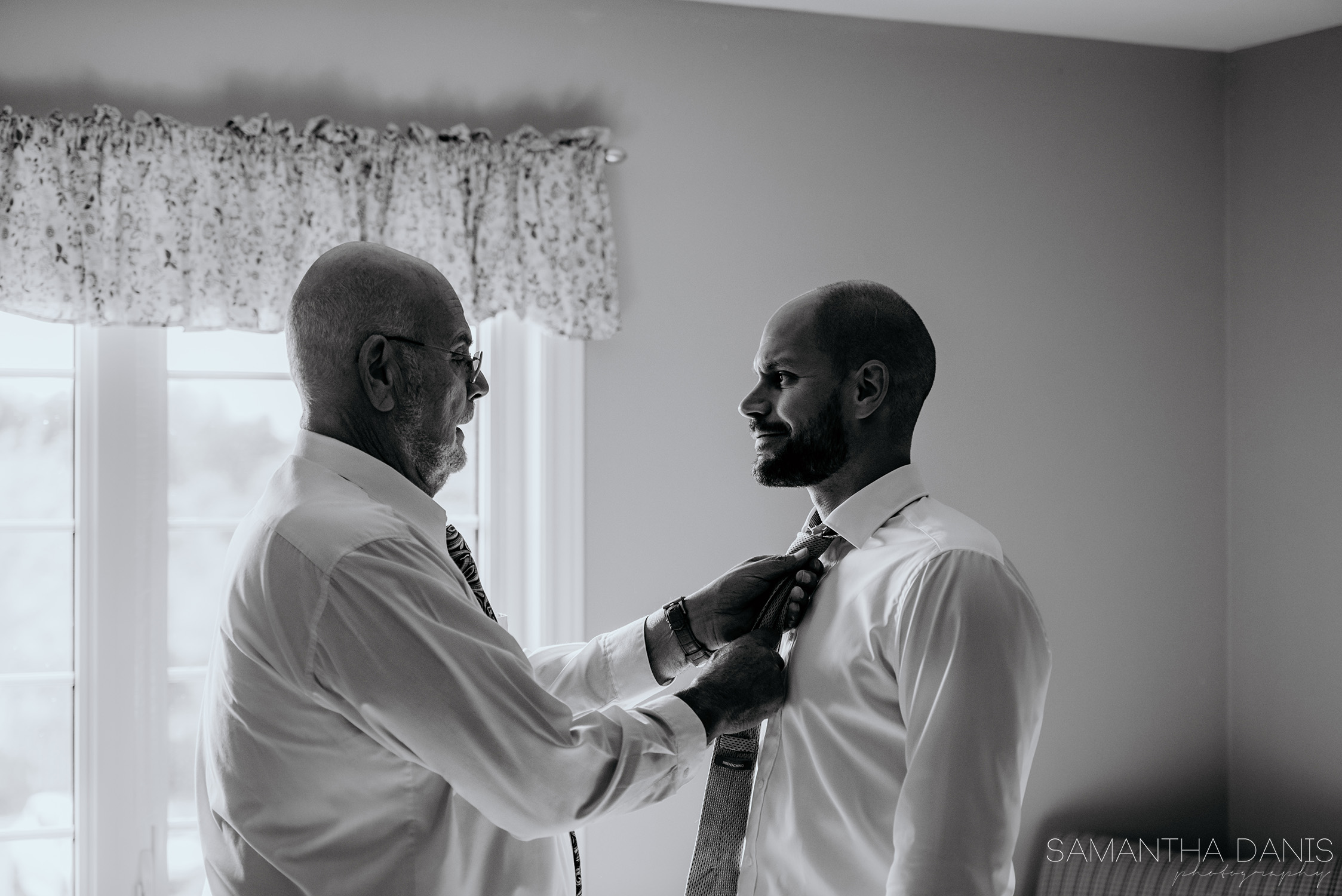 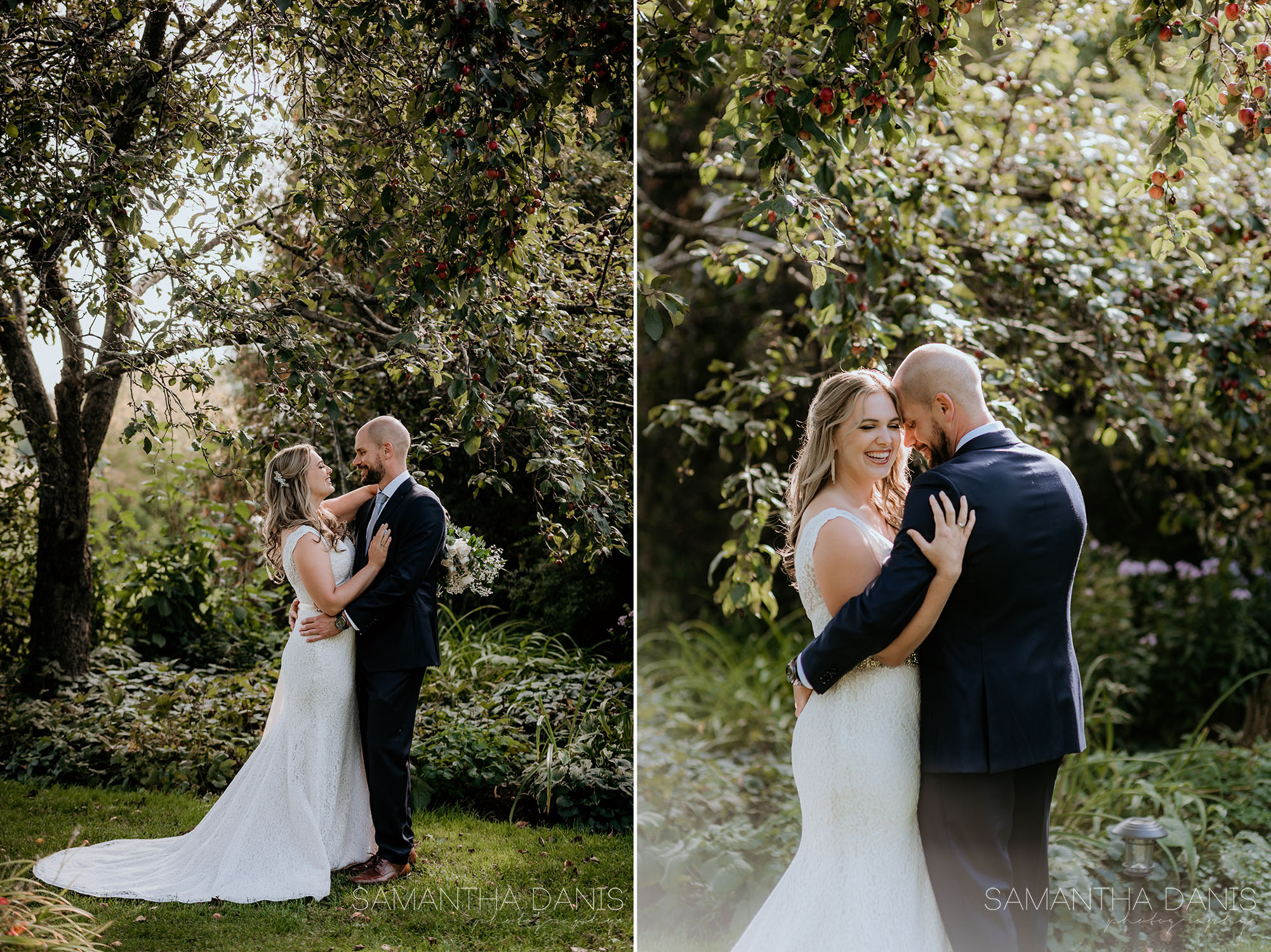 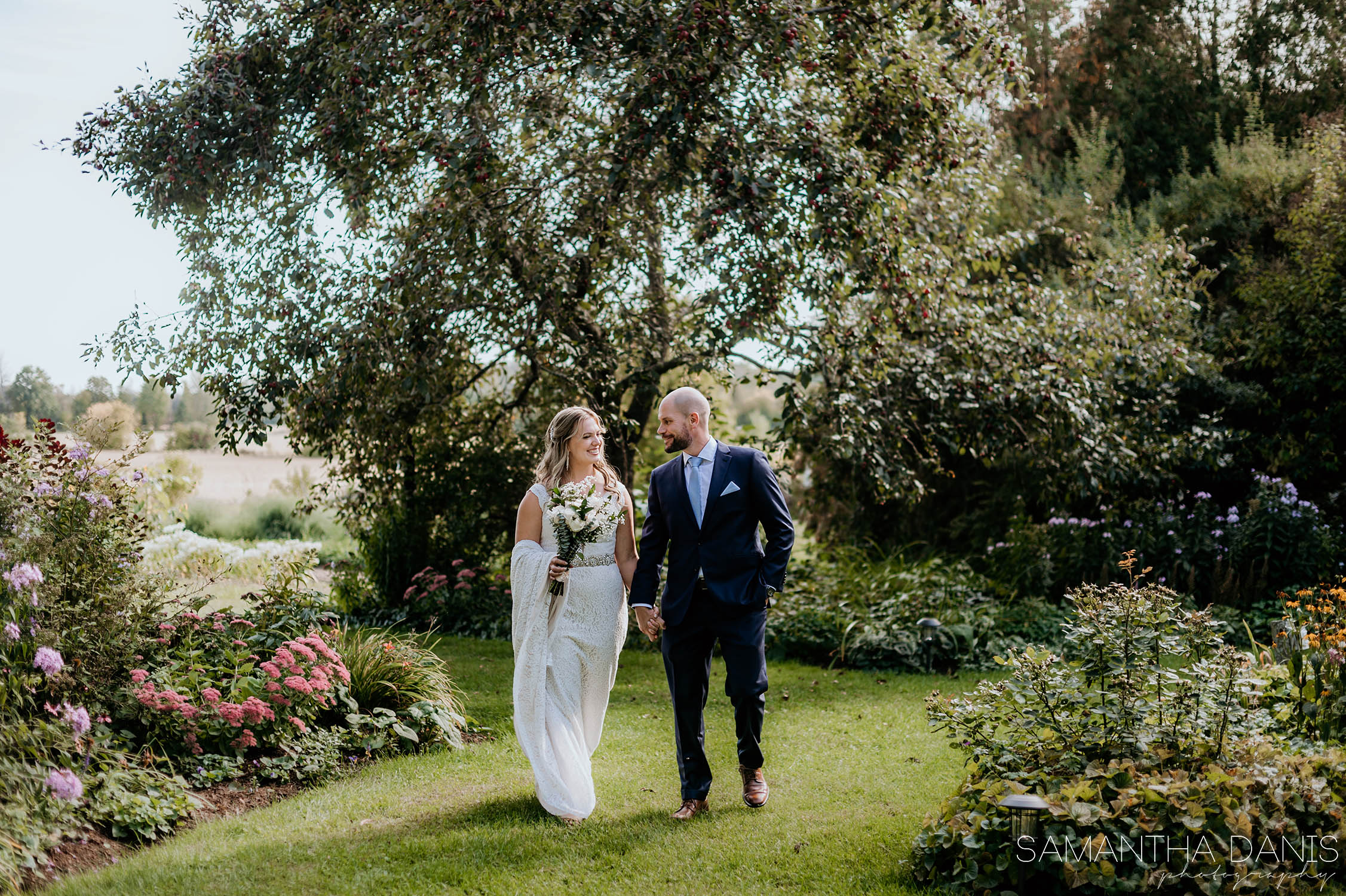 How stoked were we that there was even the smallest patch of sunflowers left in the fields! We were even able to get some pretty interesting shots! 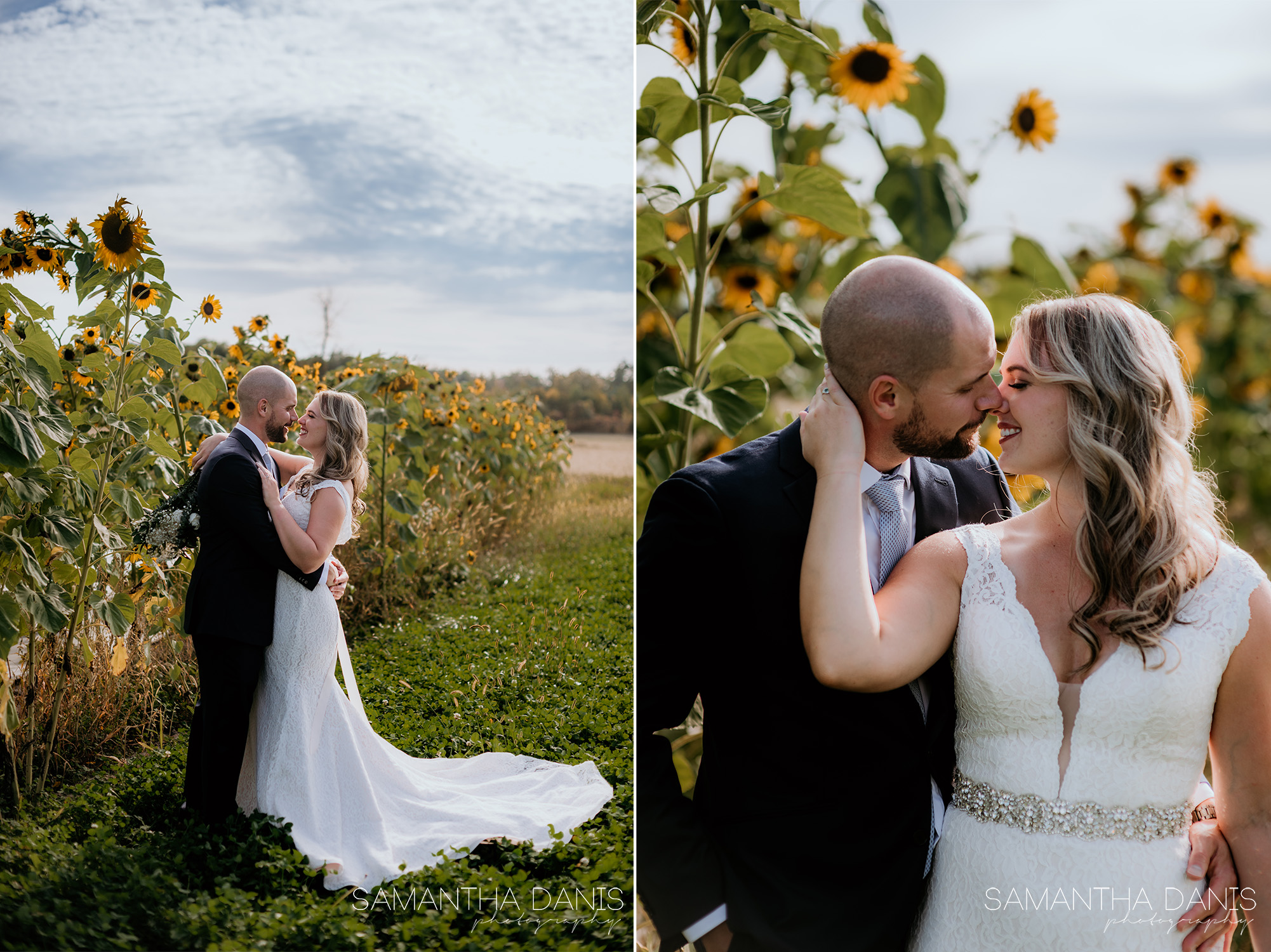 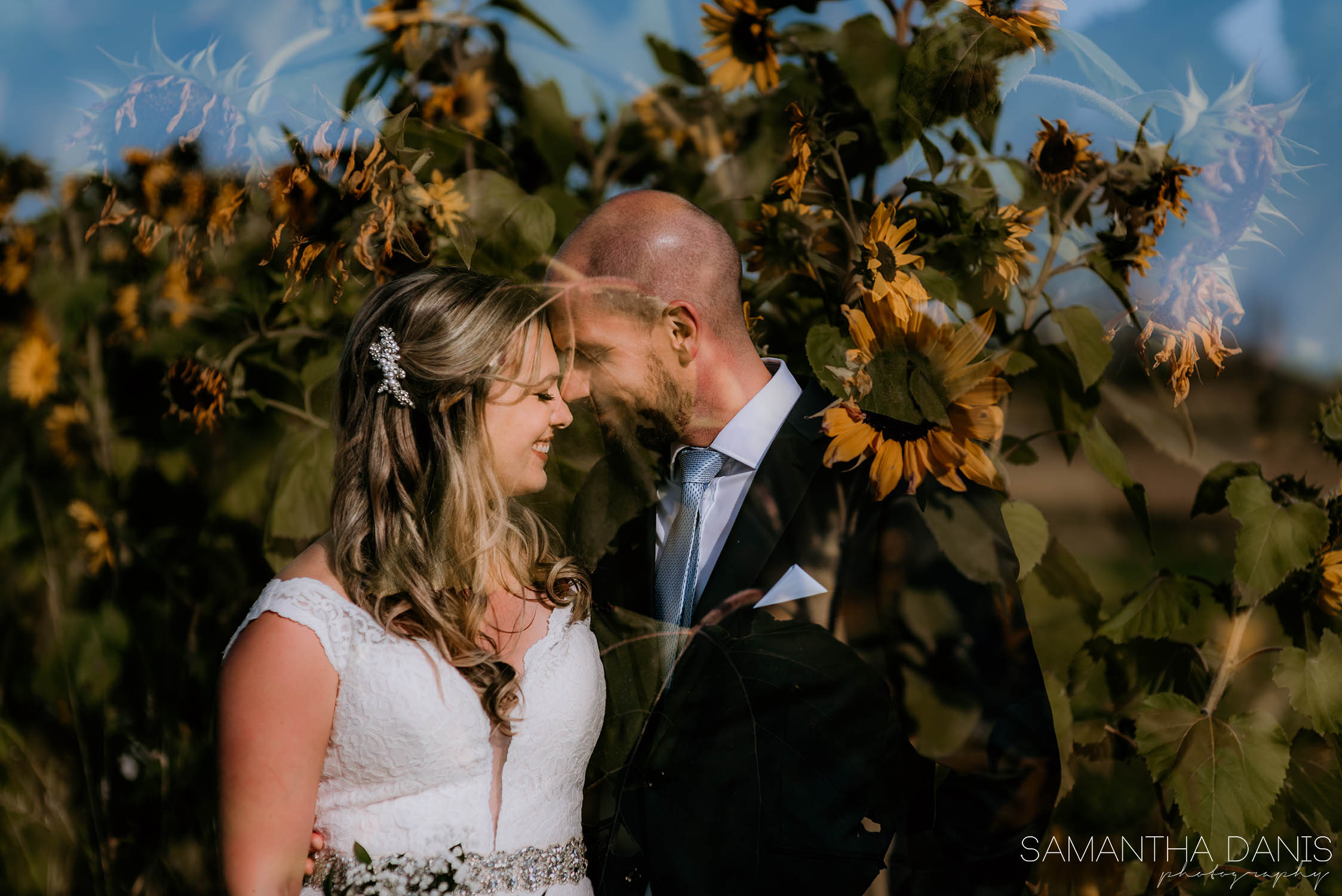 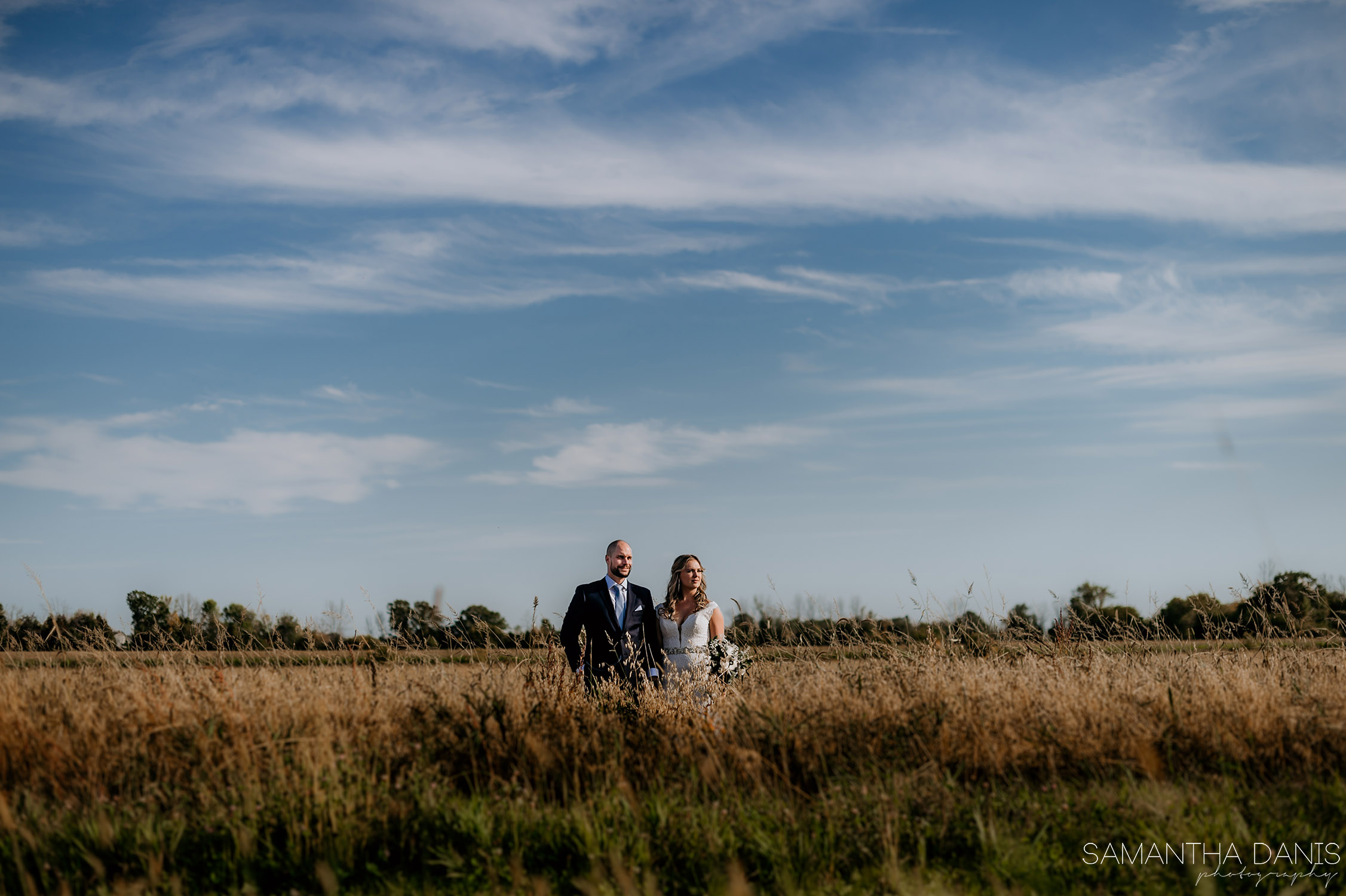 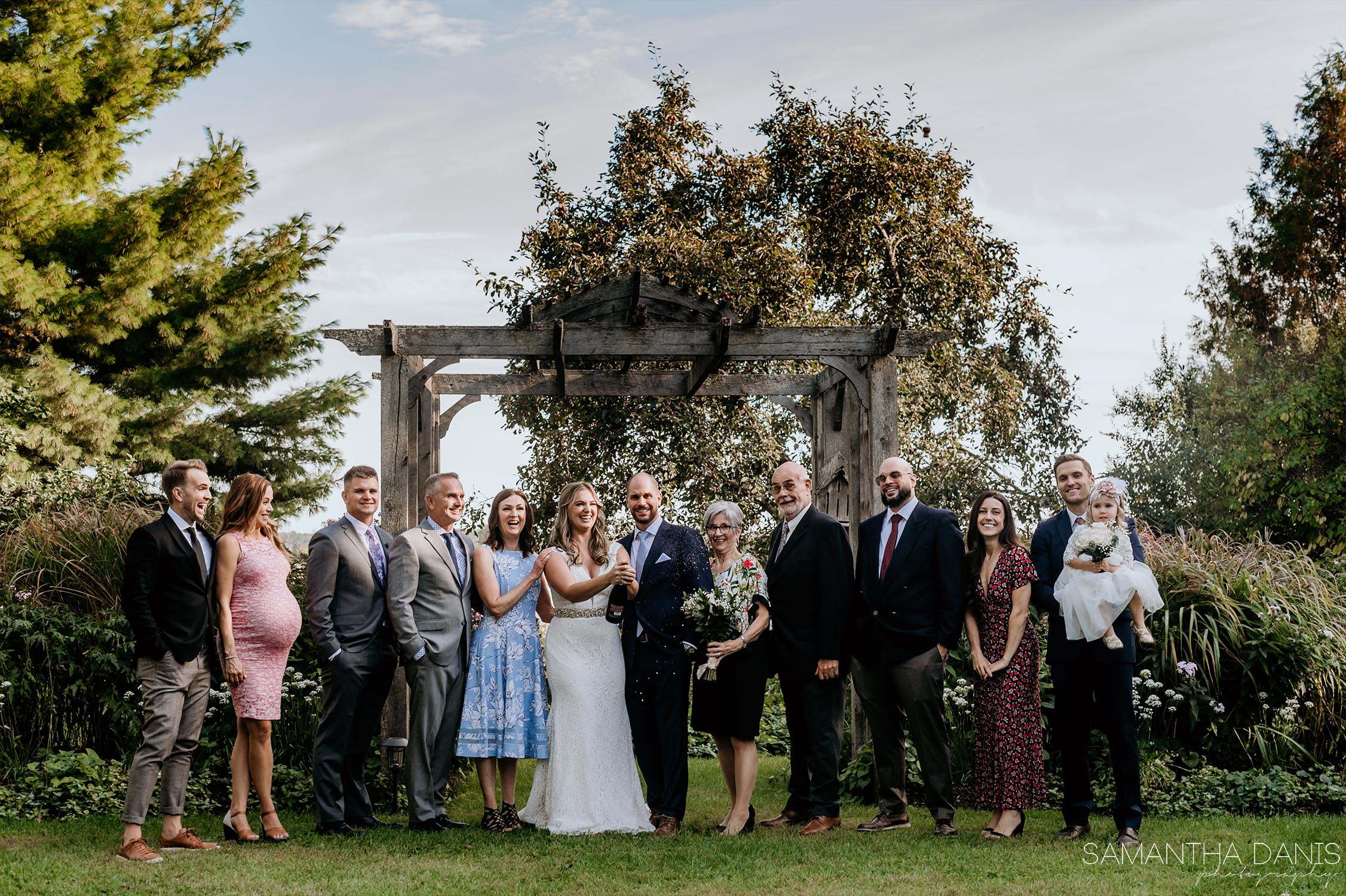 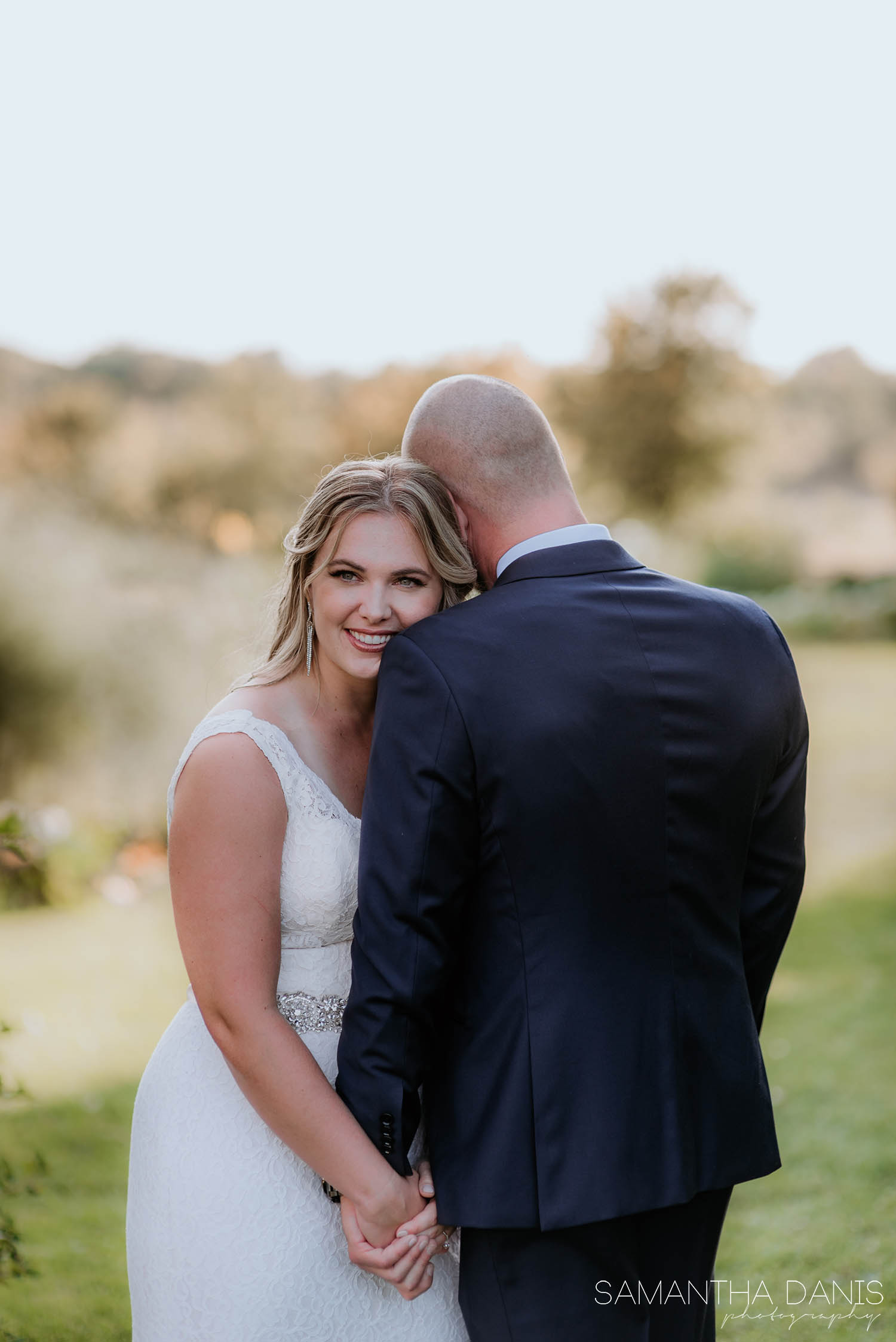 Their ceremony and reception was held at the Lodge at Strathmere. And it never disappoints. With it’s beautiful wooden arch and seats, string lights hung above the entire area and in this case beautifully and simply decorated with a white draped piece of fabric. Rick walked out arm in arm with both his parents as he awaited for his very soon to be wife to make her way down. As Kristen walked out with her dad smiling as big as the I can see, Rick’s eyes welled up and hers followed very quickly. To those who say first looks make it so the ceremony’s first look doesn’t compare are very very wrong and these two are the proof of that. Their ceremony was filled with beautiful analogies thanks to their officiant Mr. Alan Viau and very sweet traditions. One was the Wine bottle tradition where they wrote a letter which they will read on their anniversary while they drink the locked up bottle of wine. Followed by a beautiful hand fasting ceremony where their hands are intertwined and wrapped in a ribbon and tied in a knot to symbolize the commitment they have just made. And finally, it was followed by the sweetest first kiss as husband and wife ever. Followed by many little kissed after that. 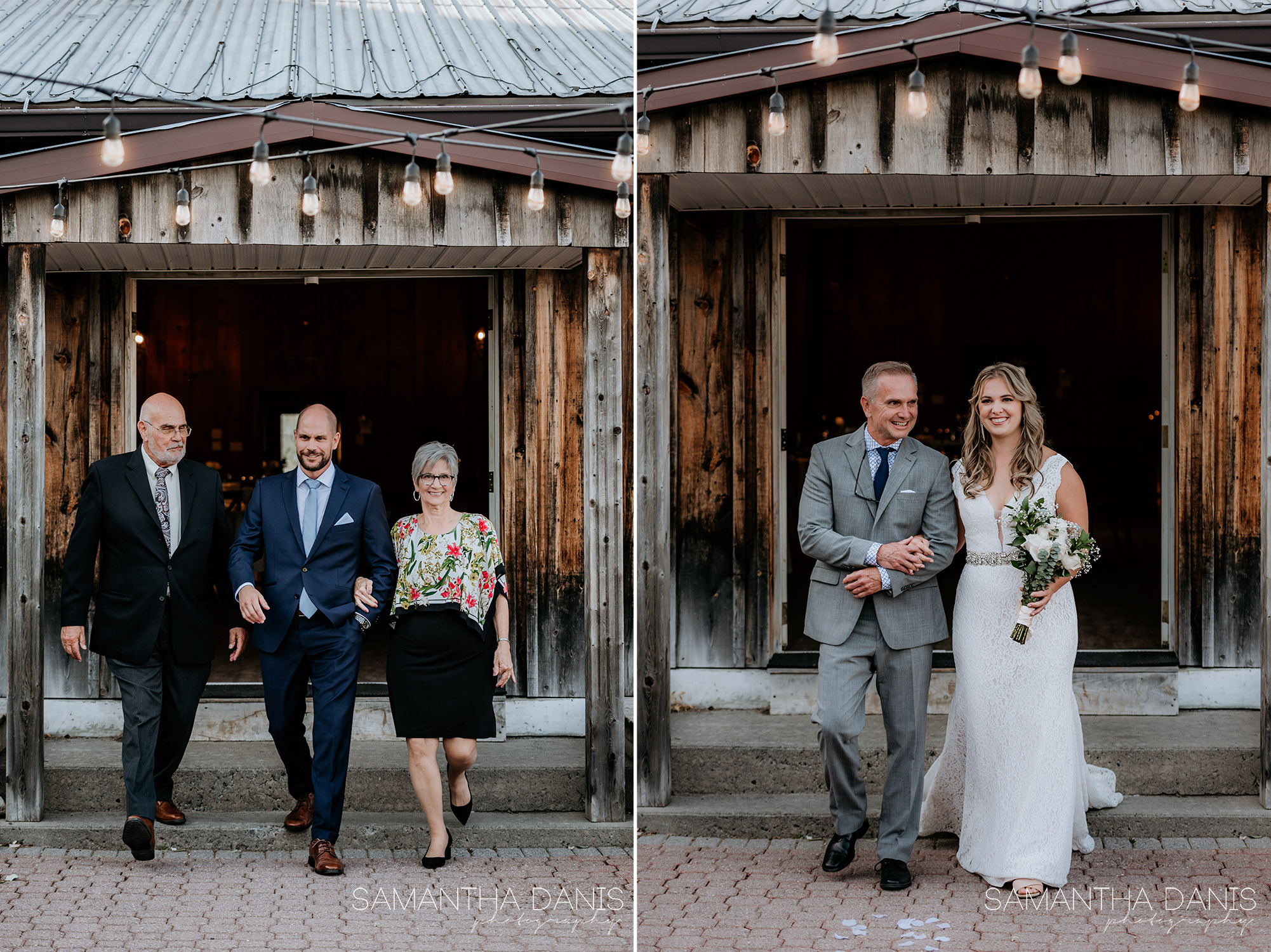 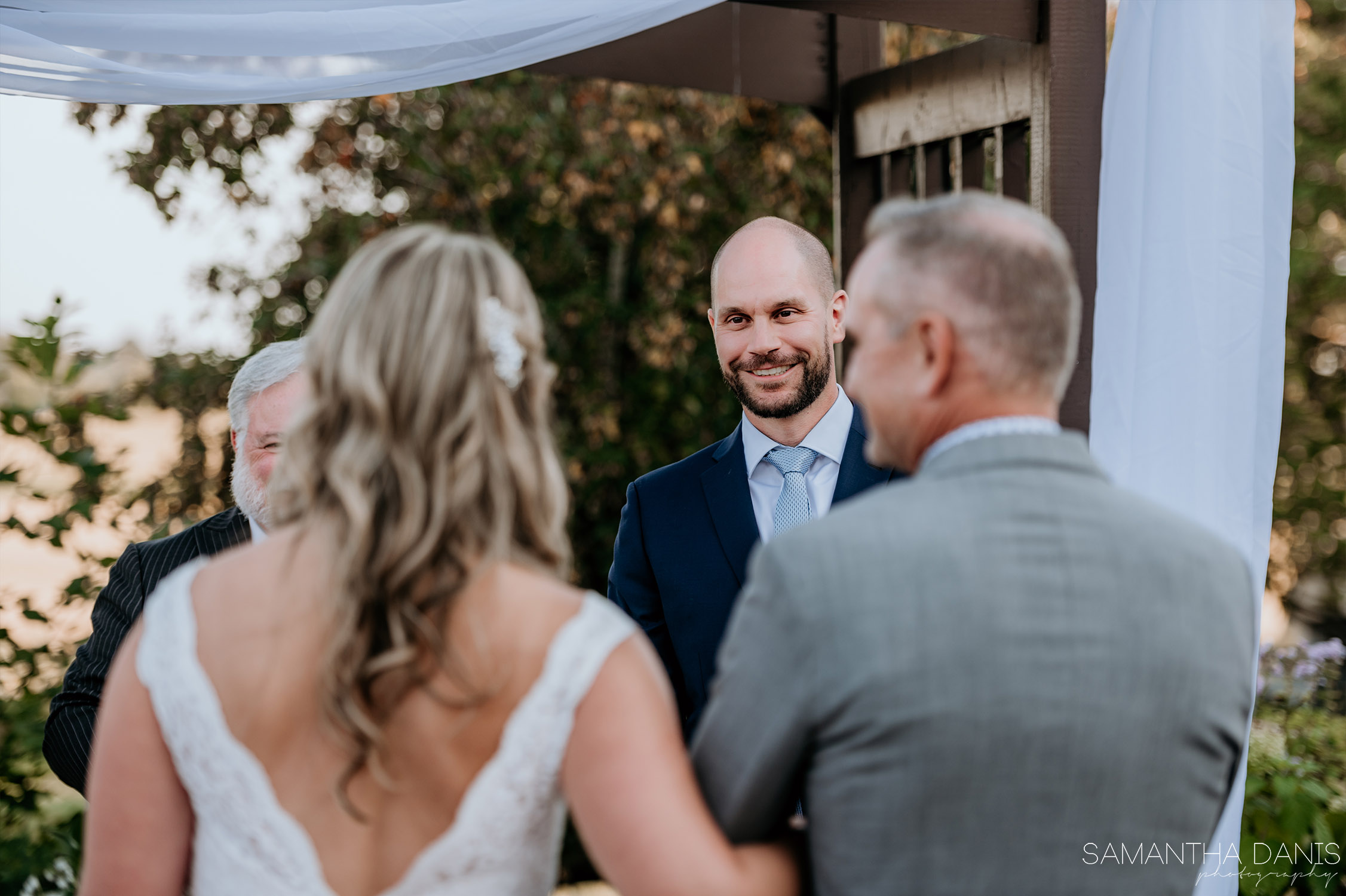 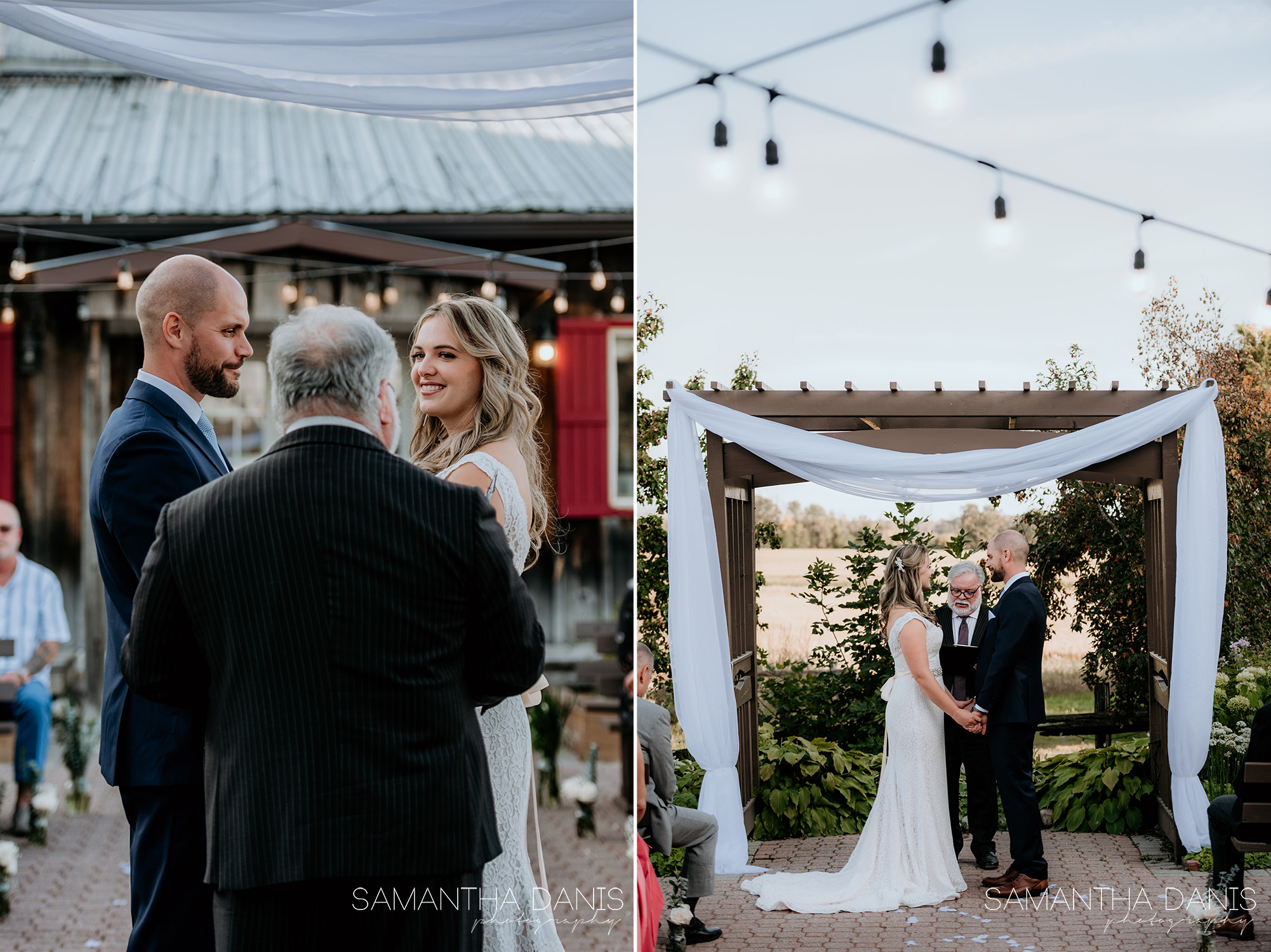 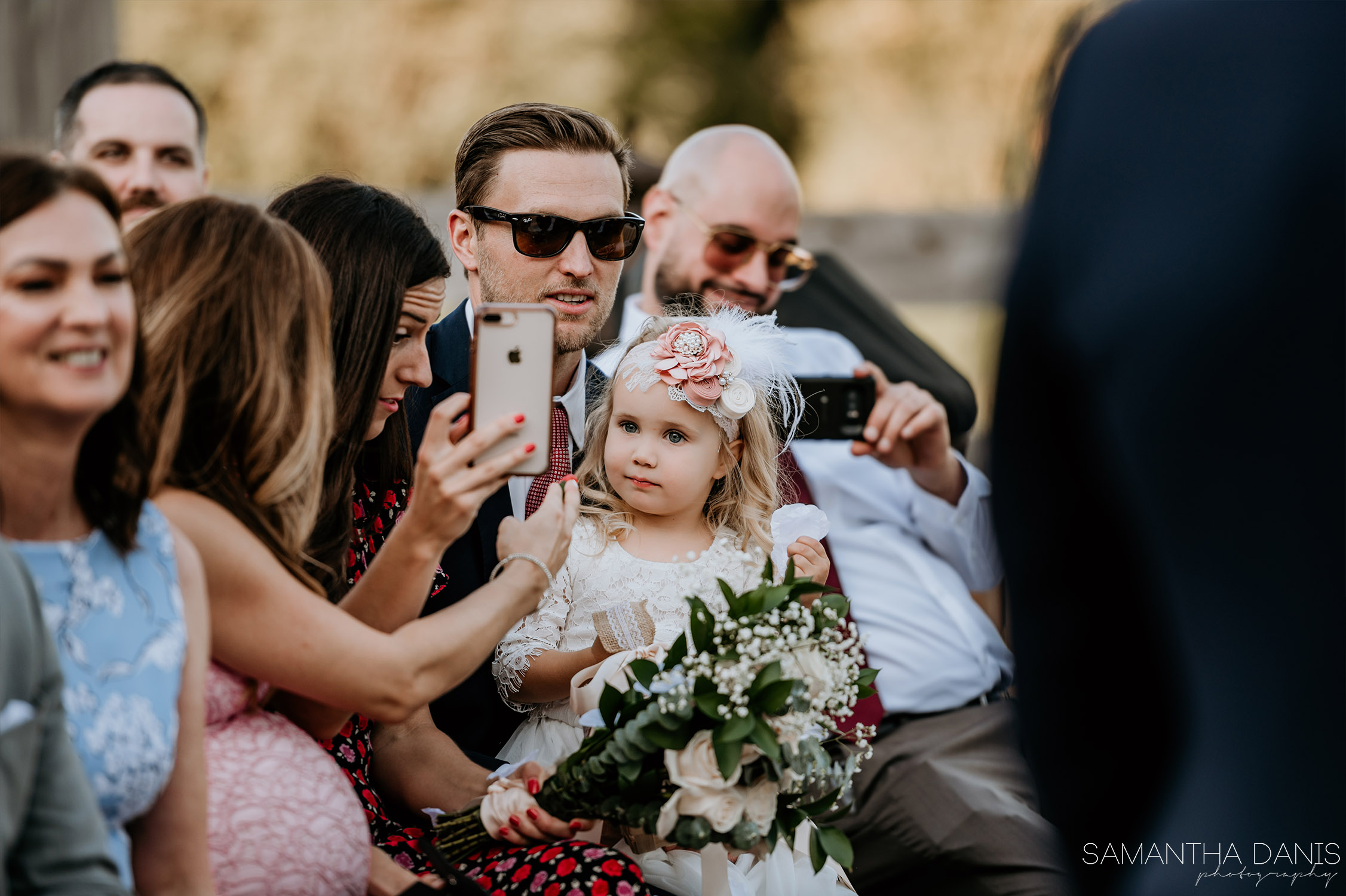 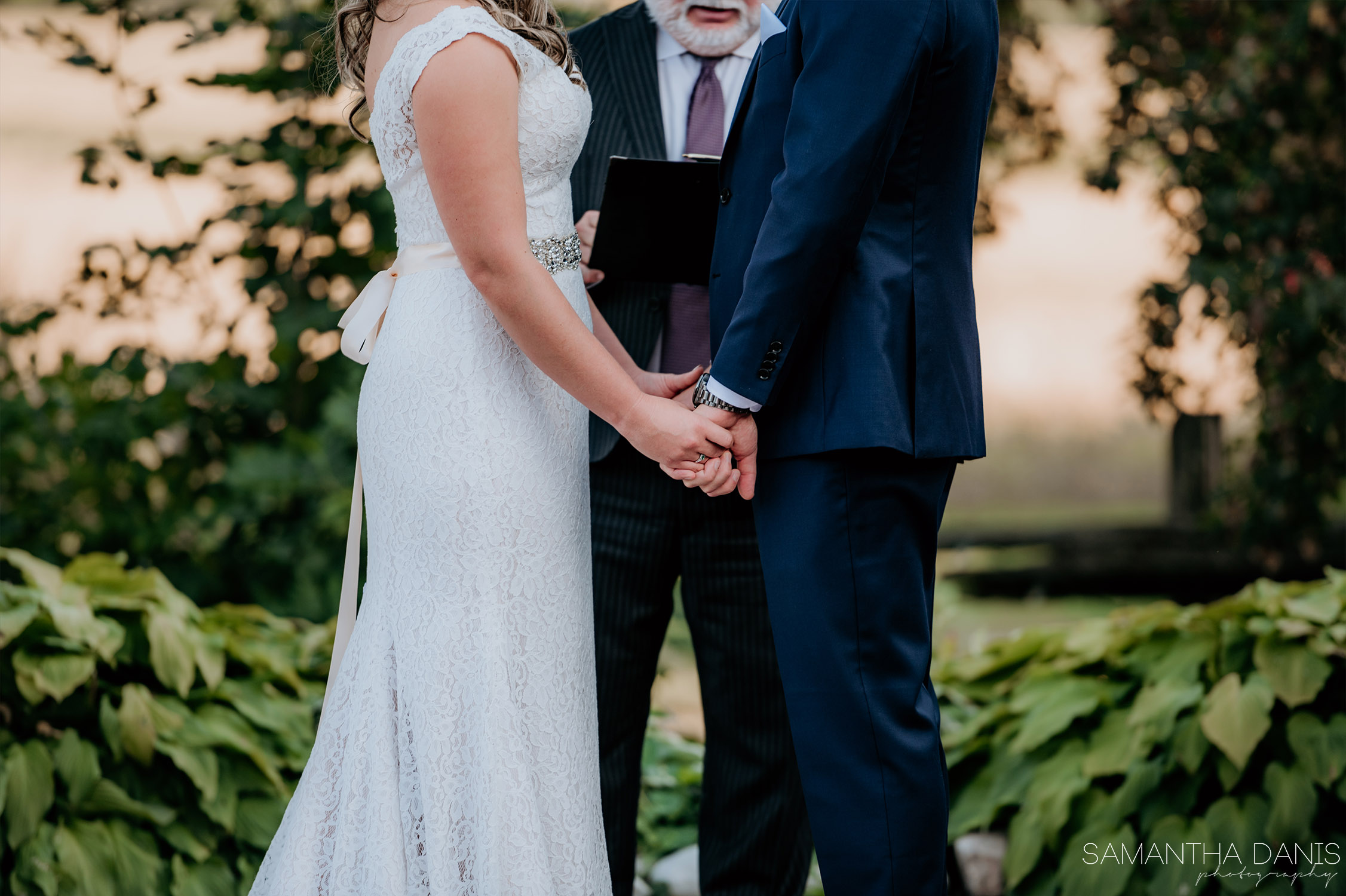 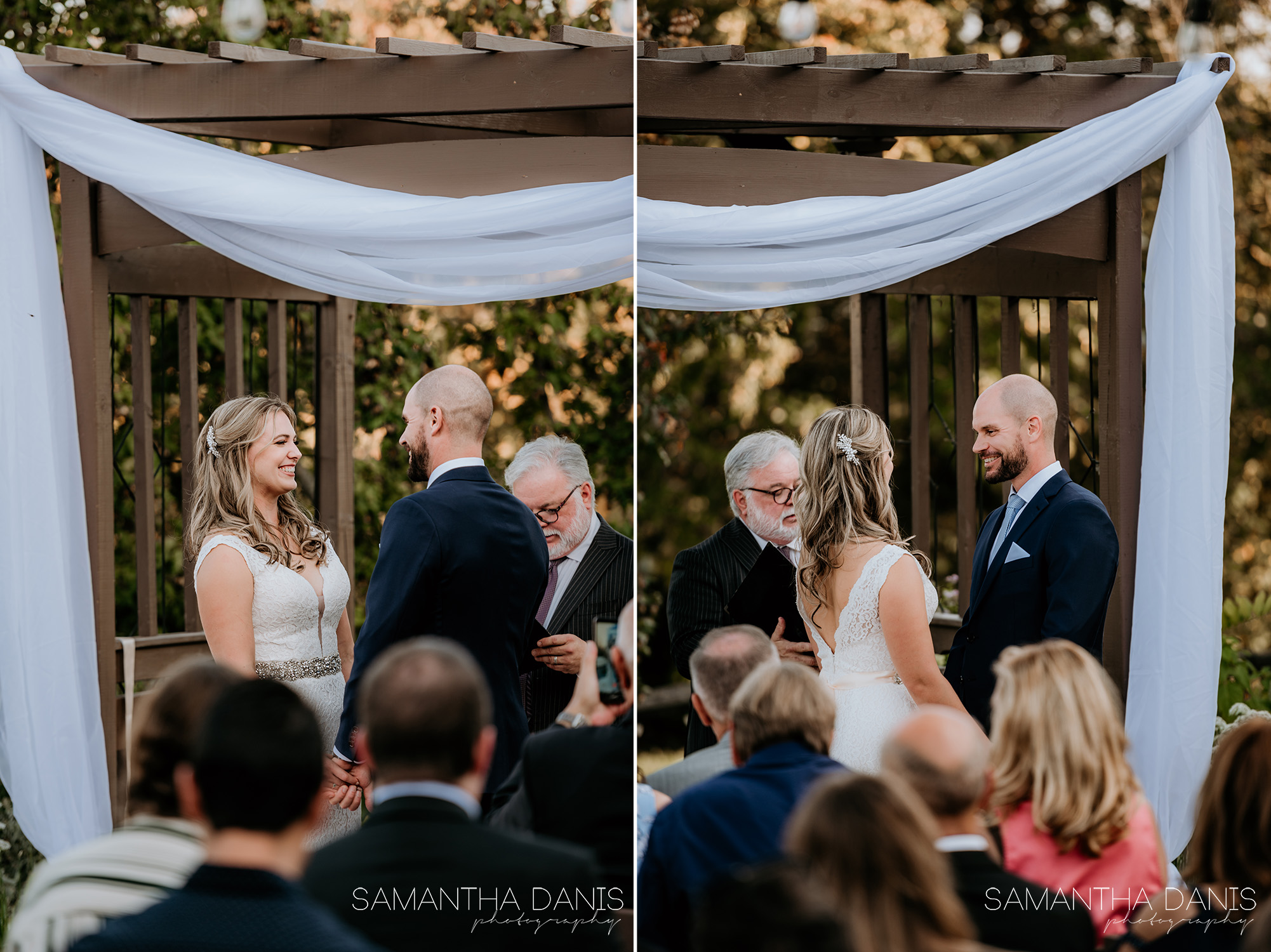 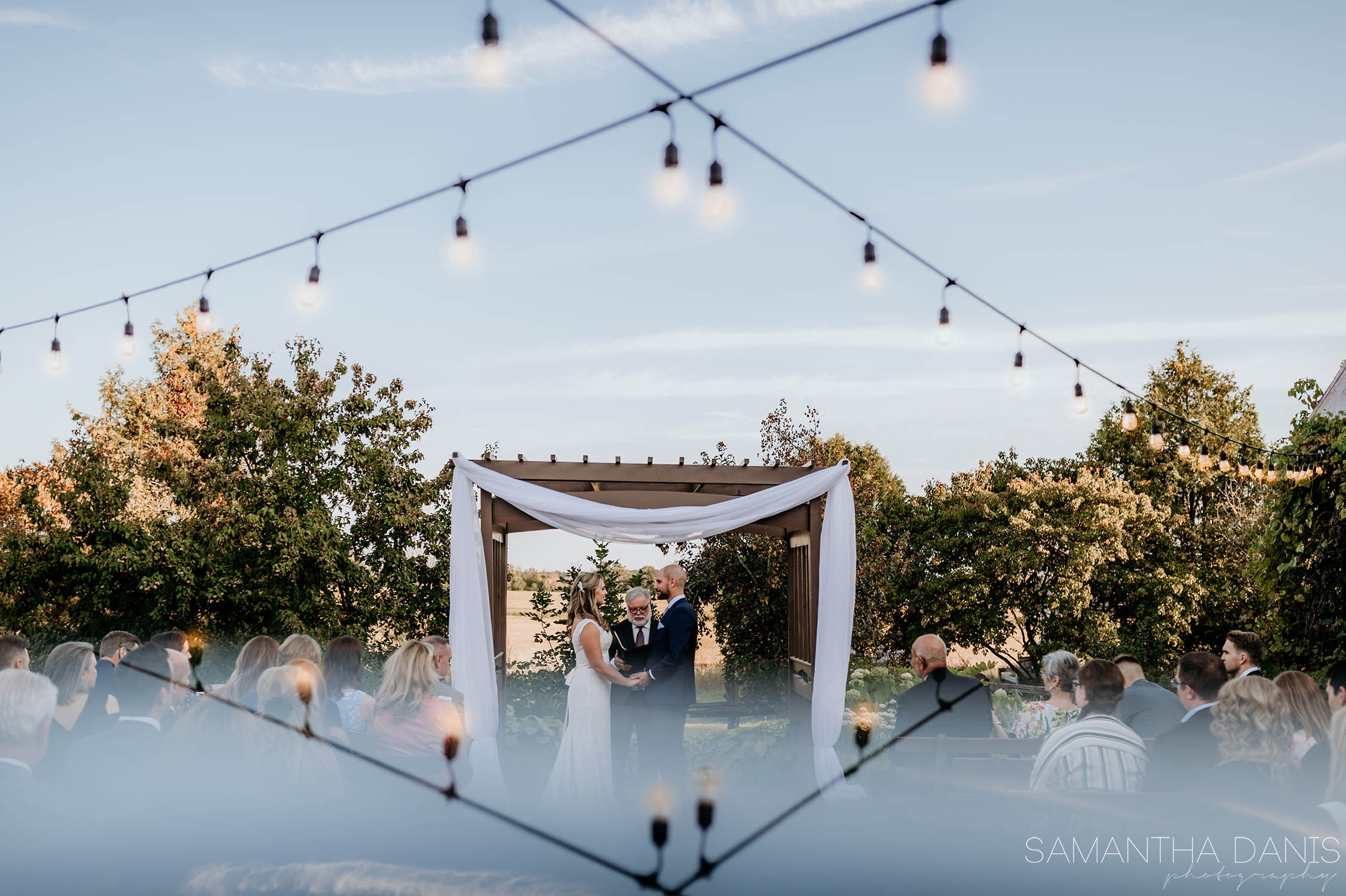 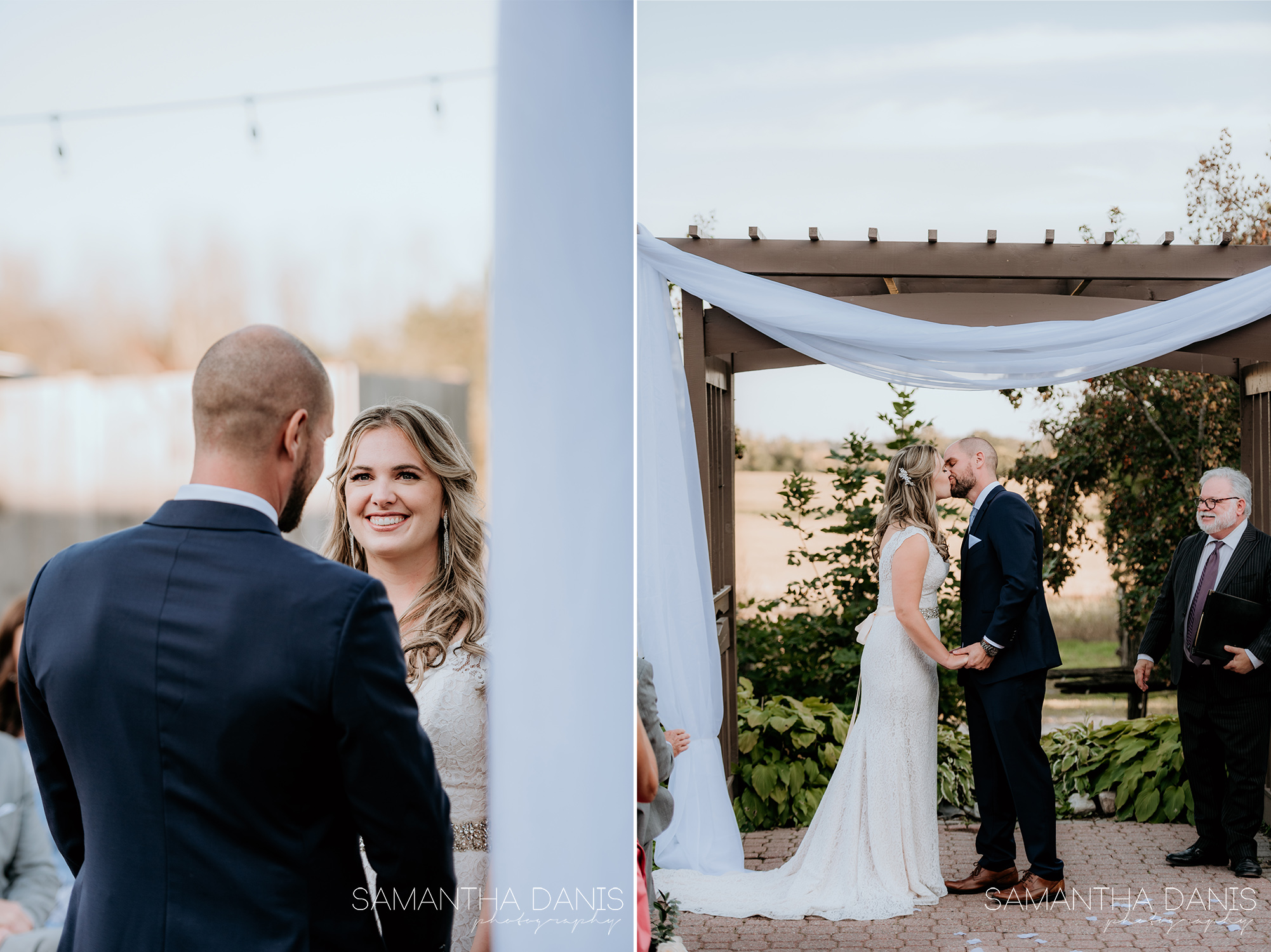 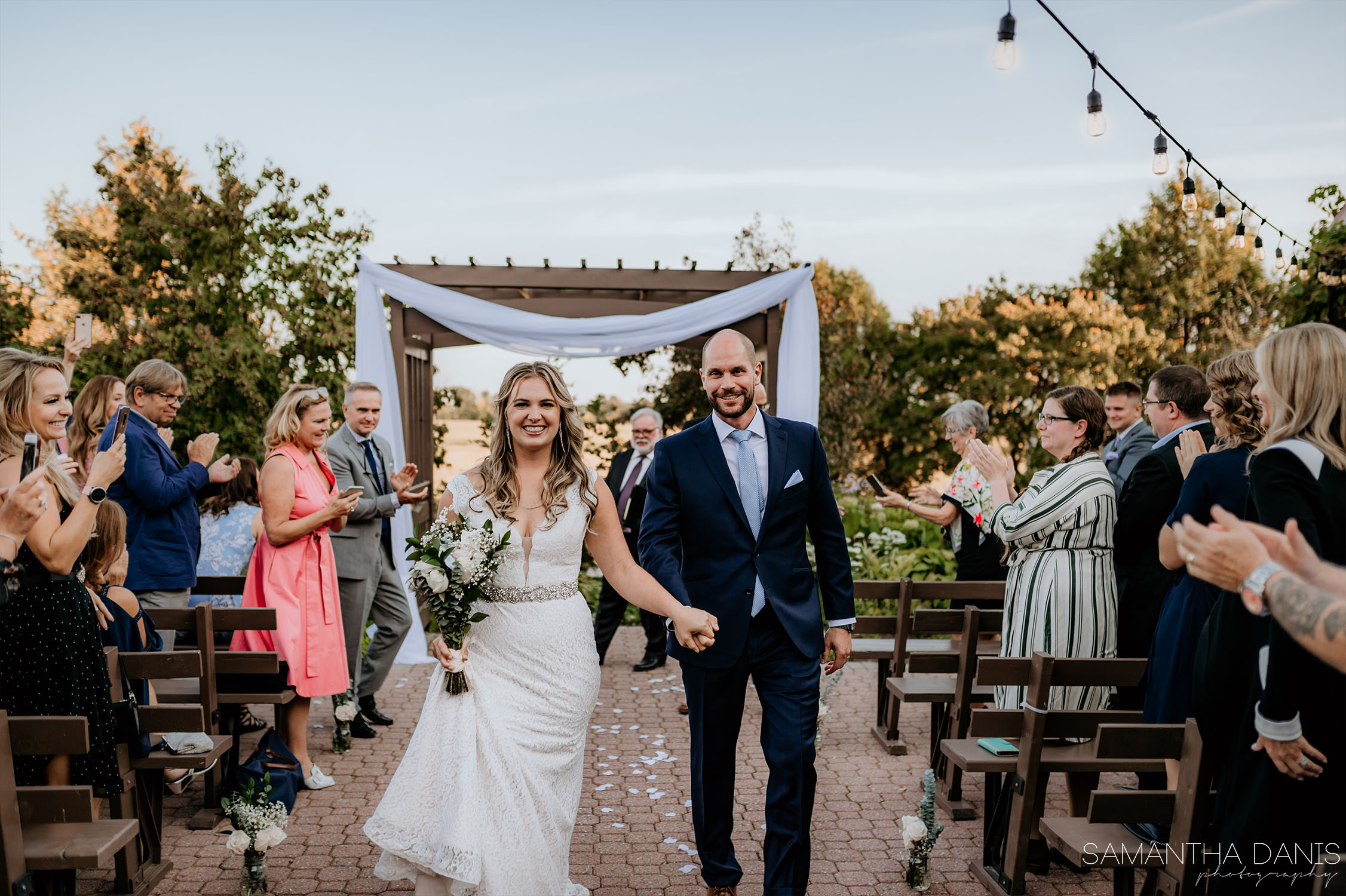 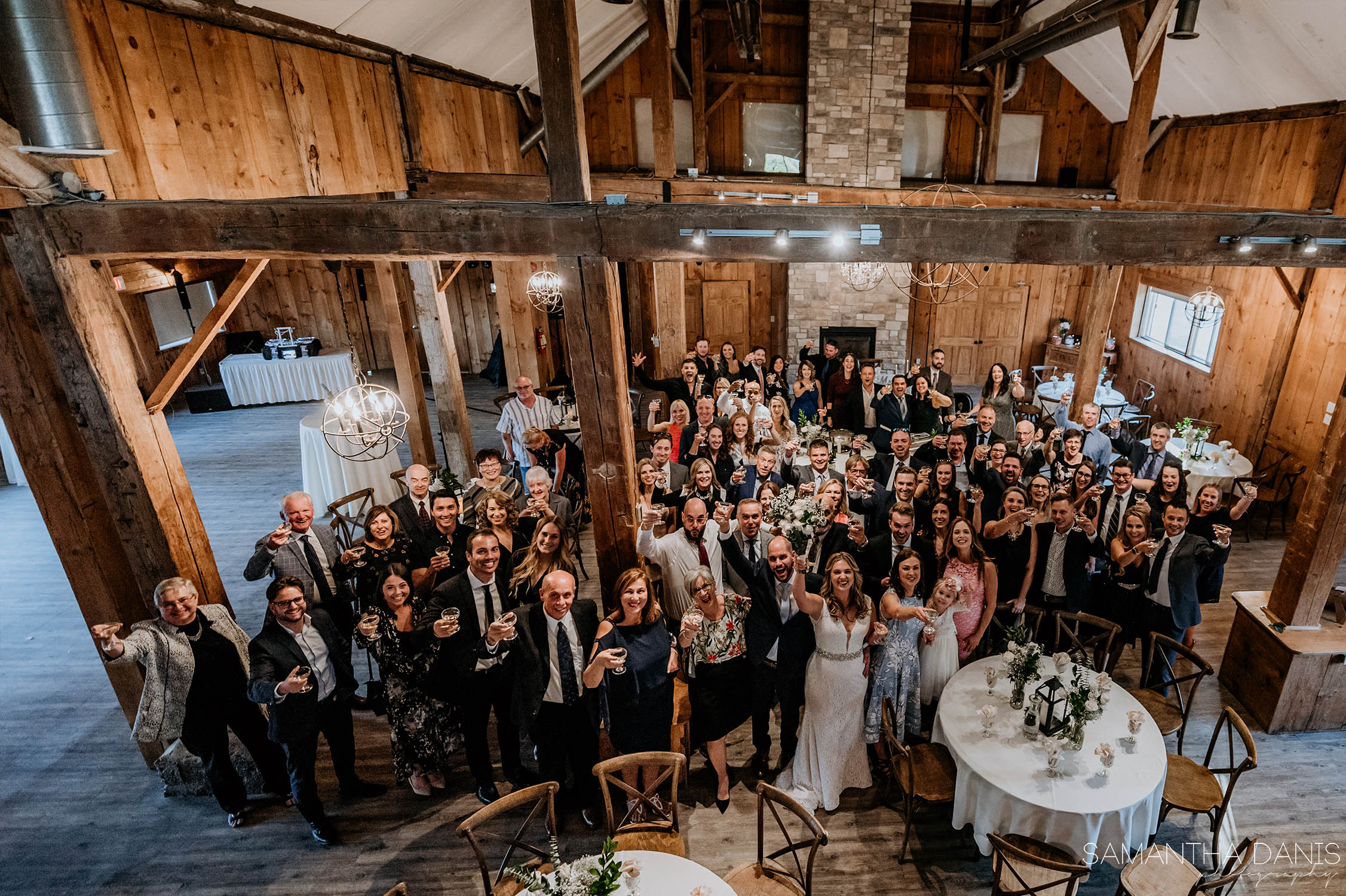 Remember when I said they didn’t do a traditional dinner? Yeah well they still made sure the guests had food that was to die for (seriously Strathmere, I’m considering getting married there simply for the food). They had so many cocktail style foods going around, I was even able to have a few bits and I gotta say, the Mac and Cheese balls and Spinach dip was just perfection. Kristen and Rick mingled with their guests for a bit before I stole them away for some final sunset photos. We walked along the Inn where the happy couple walked and danced in each other’s arms as the sun dipped below the tree line. Kristen asked for a few more field photos to which I happily obliged. Rick also grabbed a smoke bomb they had left over from their engagement shoot (read the runny story here ) so that we could have a bit of fun with the end of day sun and my flash. As Kristen and Rick got into position and I pulled the plug on the smoke bomb and set it down, I remembered it could spark (which it usually does). But almost immediately after I set it down, something went wrong and it just burst into flames! Like tall flames which may or may not have singed grass around it. For a few seconds there Rick and I were just like HOLY CRAP what do we do, I was about to tell him to take his jacket to extinguish it. But then luckily it’s like the smoke bomb container just sucked the fire back in and released all of its smoke. I quickly look at Kristen and Rick and tell them LET’S DO THIS!!! As the smoke filled the air and the entire field we heard a little peep behind us. I turned to see their wedding coordinator prancing through the field and bushes and she quickly asked us if we were okay. All three of us looked at her and smiled. ‘’Yep everything is good, just used a smoke bomb, we’re almost done’’. As we’re kicking the singed grass underneath our feet lol. We quickly made our way back to the lodge just laughing our butts off at what just happened. 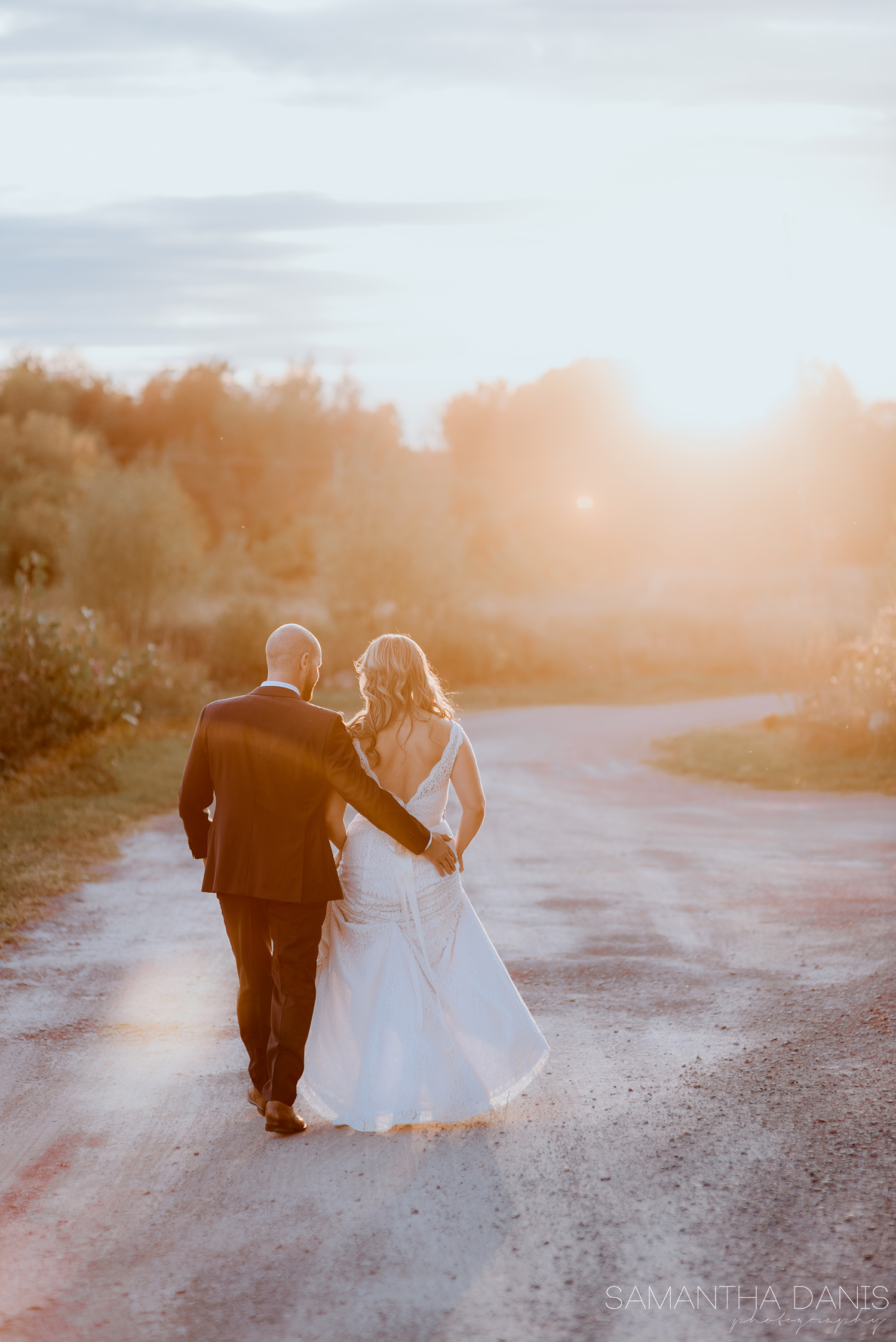 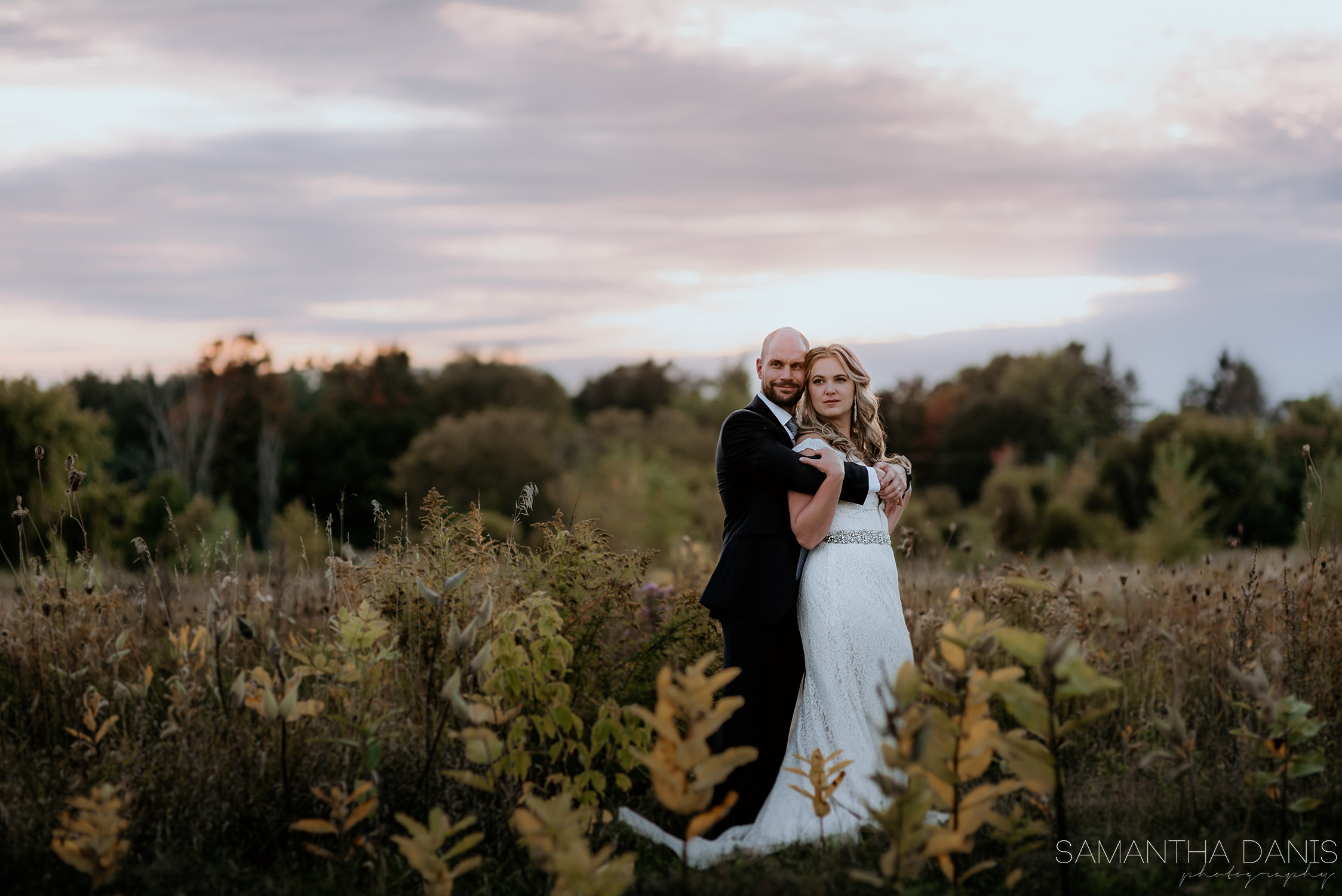 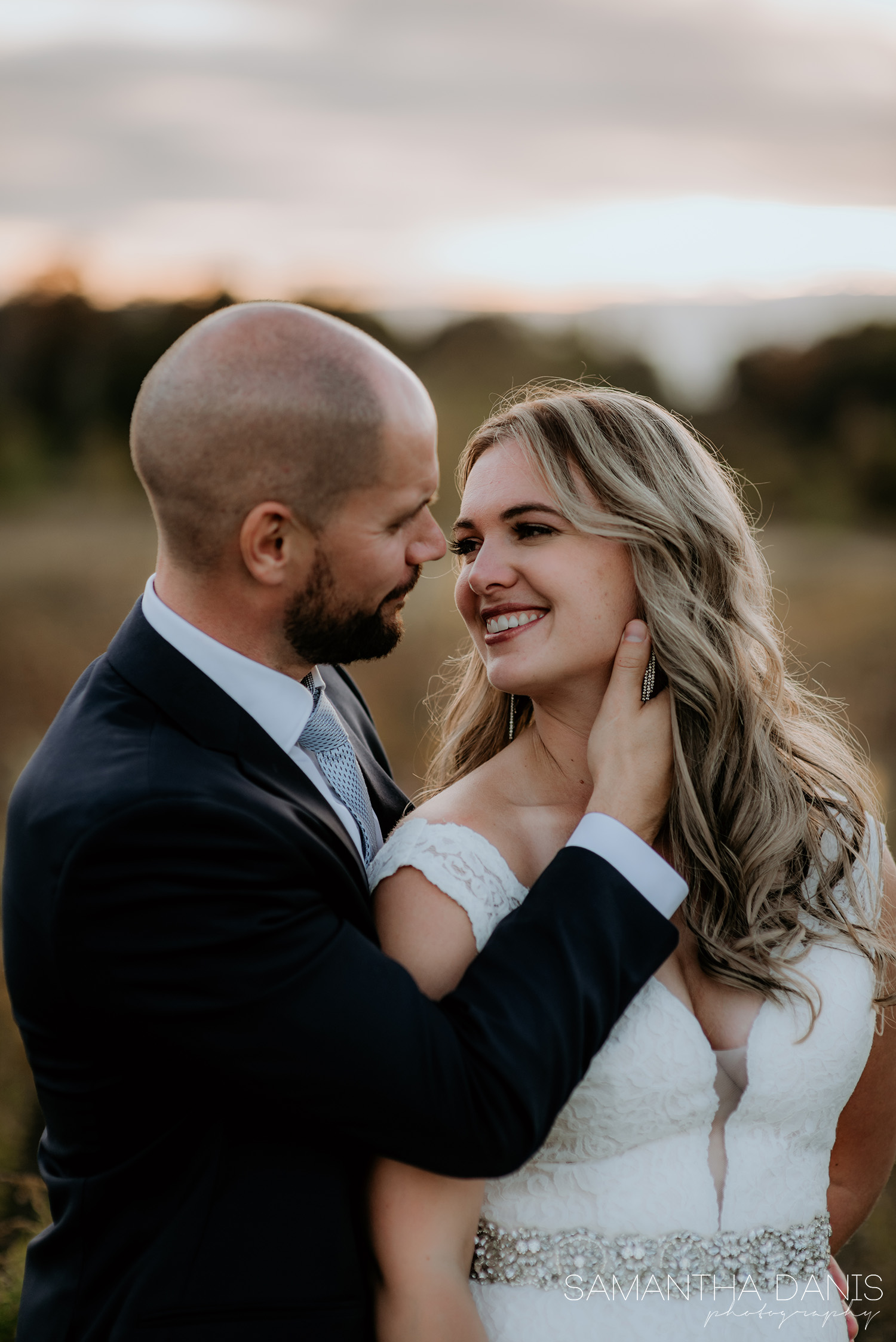 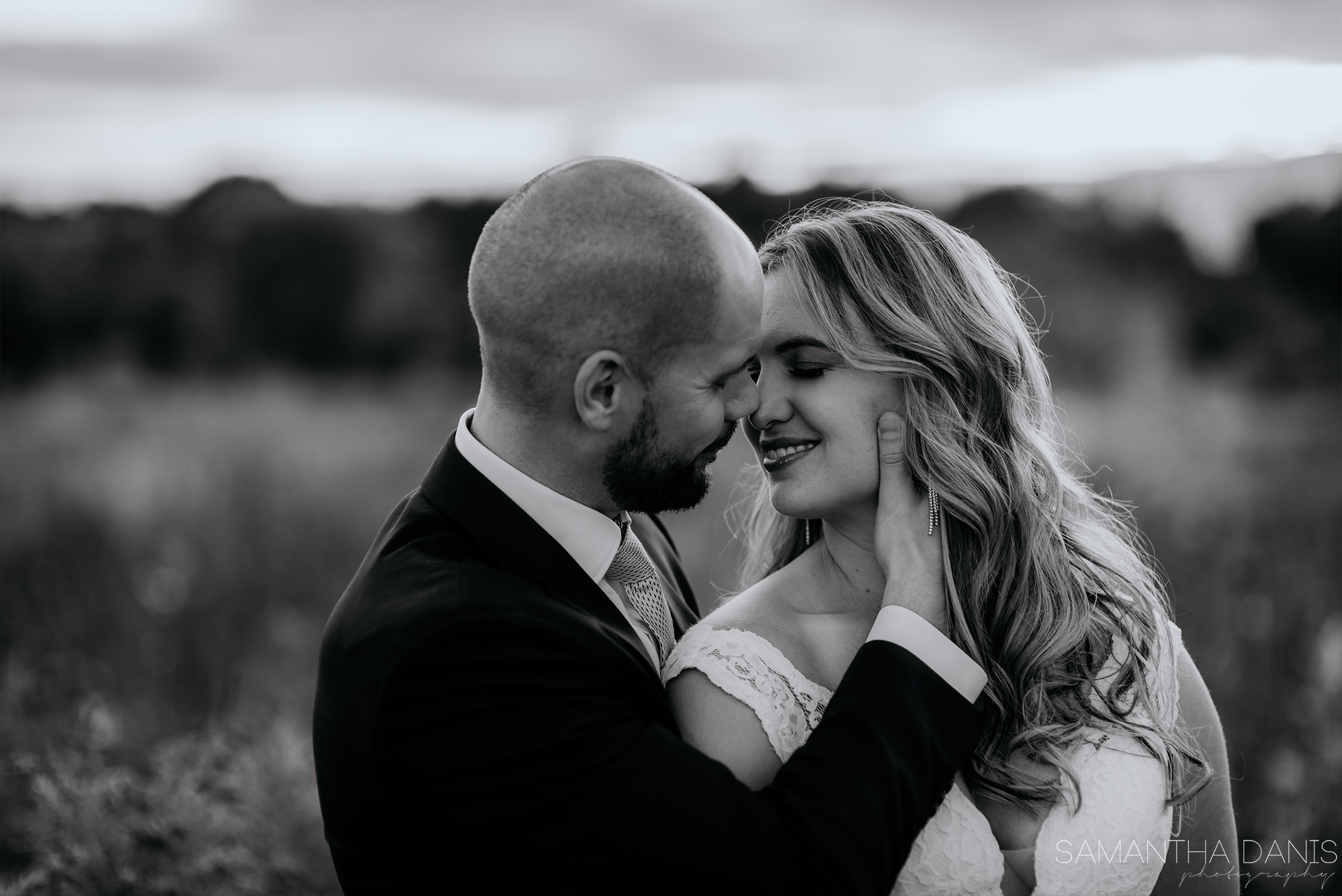 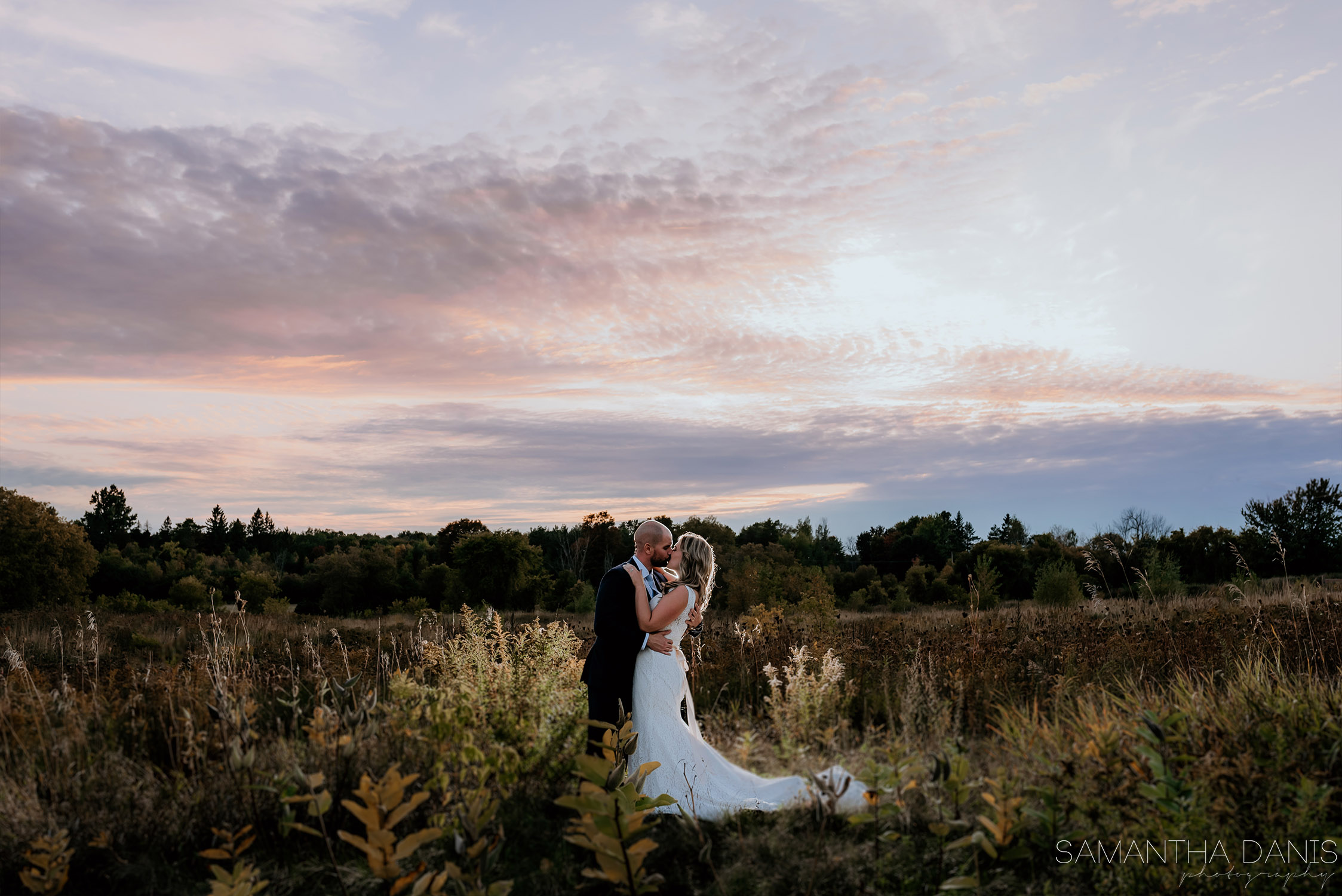 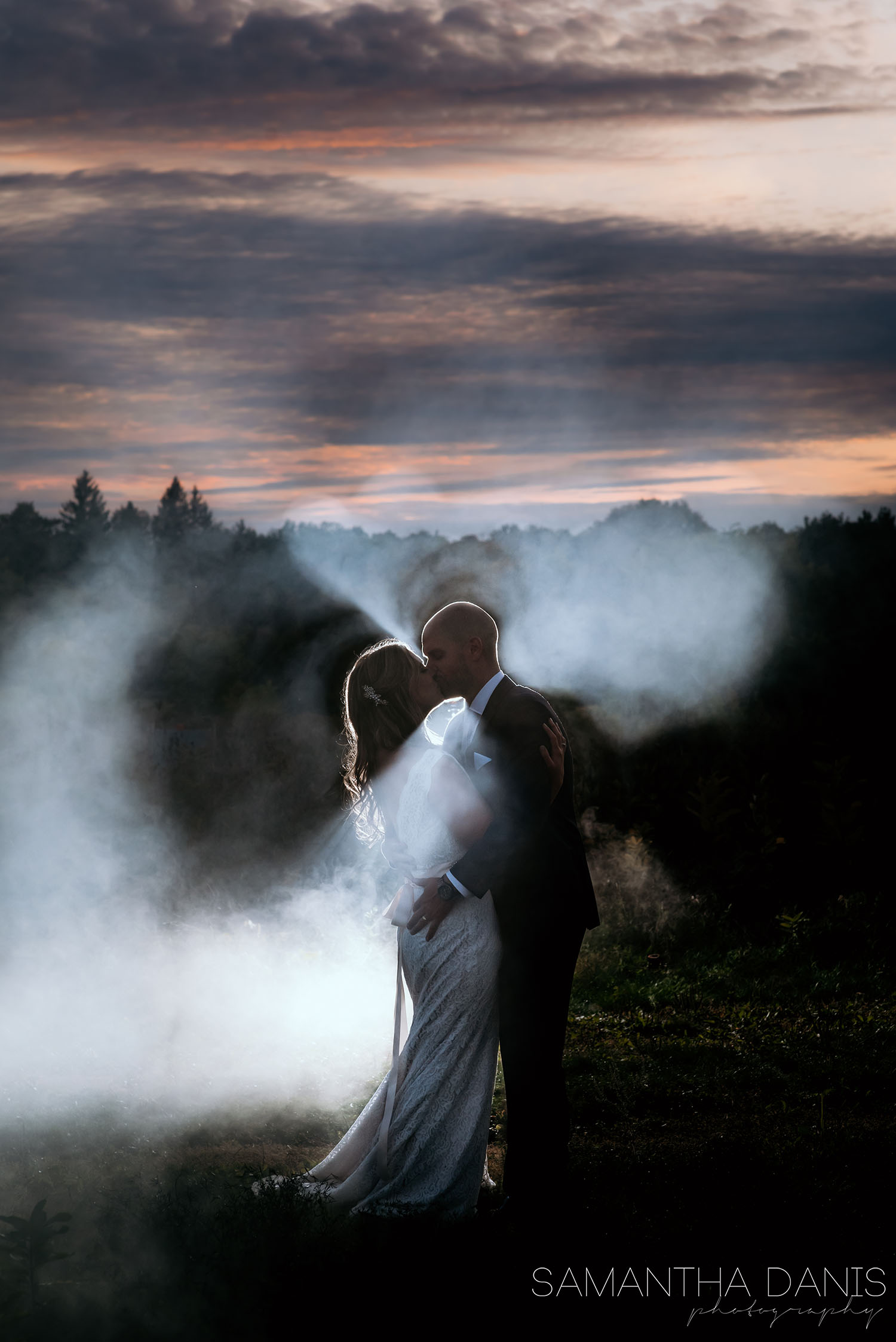 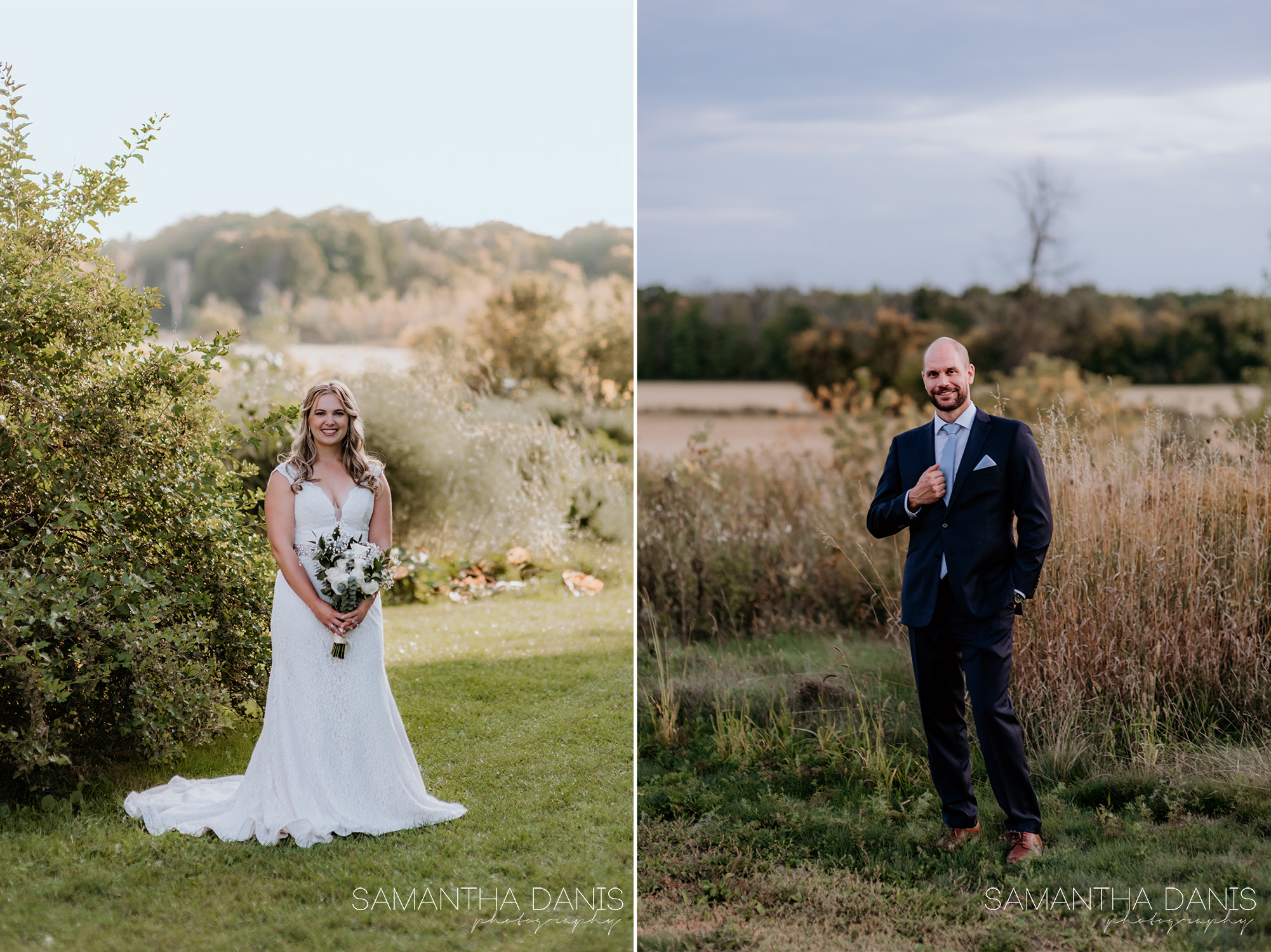 The remainder of the evening was filled with even more joy and smiles than the first part of the day. The night was MC’d by one of Kristen’s brothers and had speeches by those closet to them. I did have two favourite parts however… Okay make it three. One was how almost every speech end up referencing or joking about Rick’s baldness. I even asked him at one point if he knew there would be this must talk about his lovely head. Second was that when the speeches (besides the bride and groom’s) where done, one of Kristen’s brothers blew a confetti cannon while things wrapped up. It actually kinda scared me to be honest because I was right beside him haha. Finally the pièce de résistance, when the little Piano came out. One of their guests who was full of jokes end up singing a song all while playing the mini piano! The song, ‘’Oh Micky you’re so fine’’ but he switched it out to ‘’Oh RICKY’’ and everyone just had a riot of a time listening to him and singing along. When all was said and done it was time for their first dance. With this gorgeous 30+ degree day we had, it was perfect to have their dance out on the courtyard where they exchanged vows. Guests created a sparkler exit for them and circled the dance floor as they swayed to a beautiful Acoustic and slowed down version of 99 Red balloons. I swayed with them as I enjoyed the moment, as did they. I ended my night capturing combined father-daughter and mother-son dance. 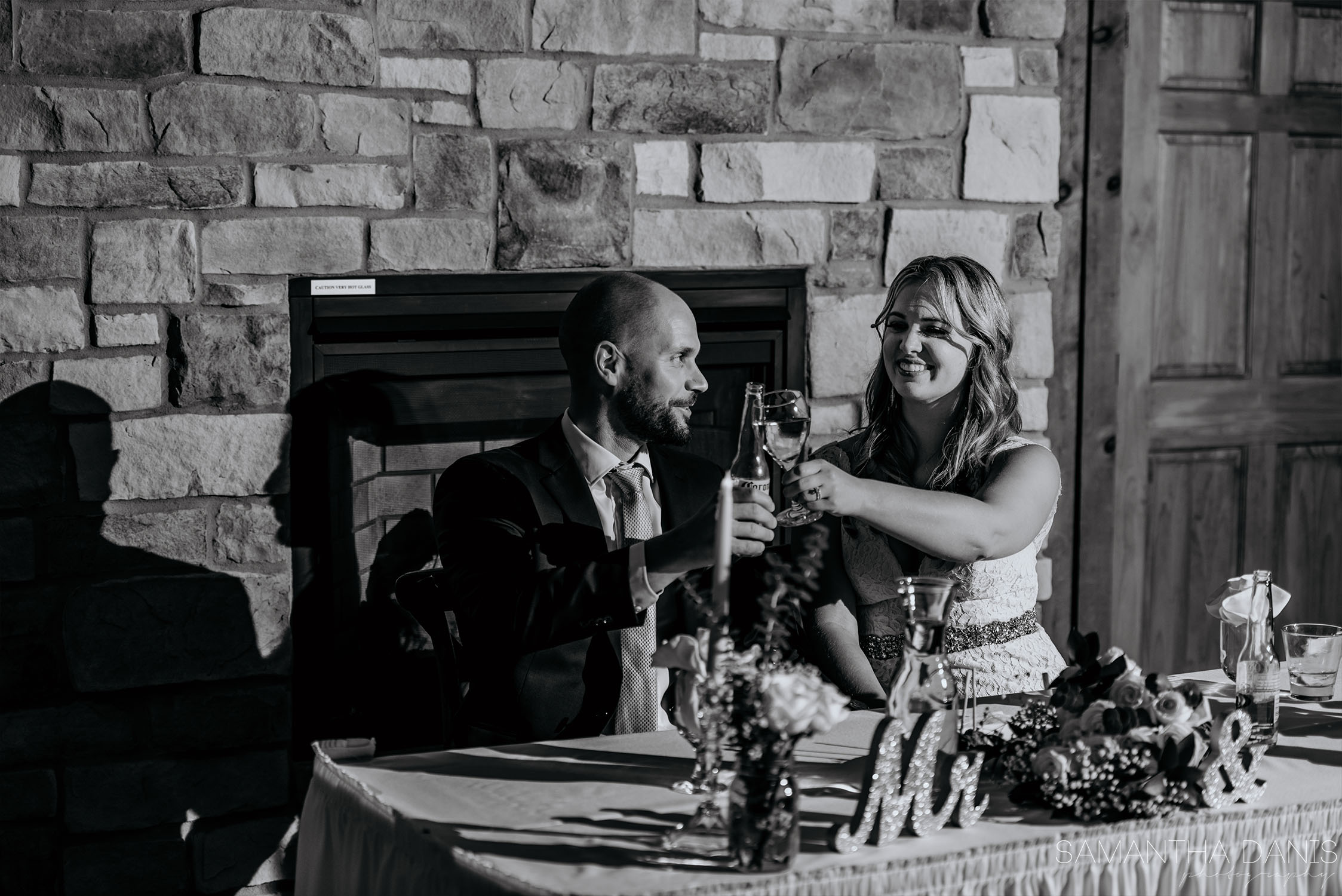 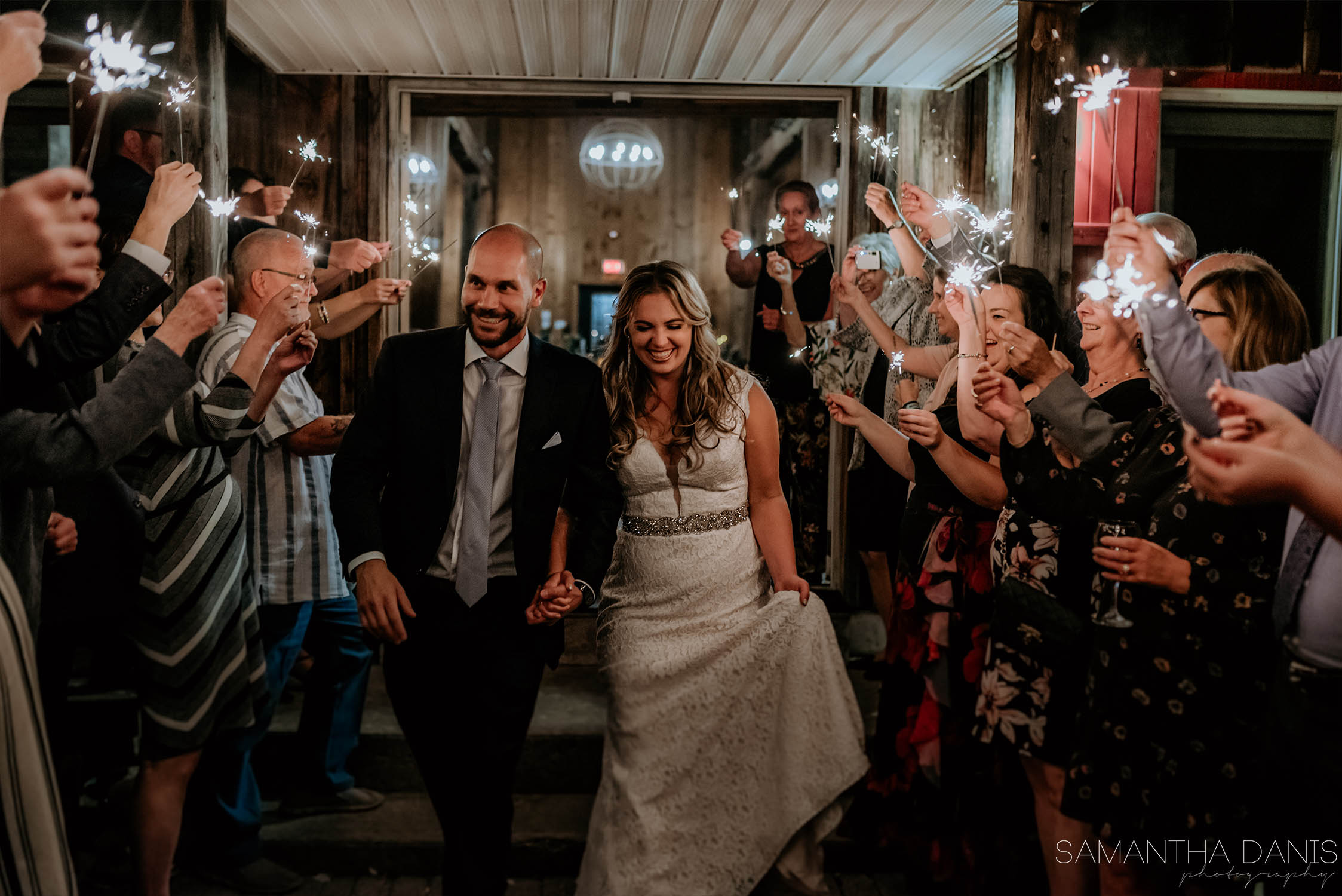 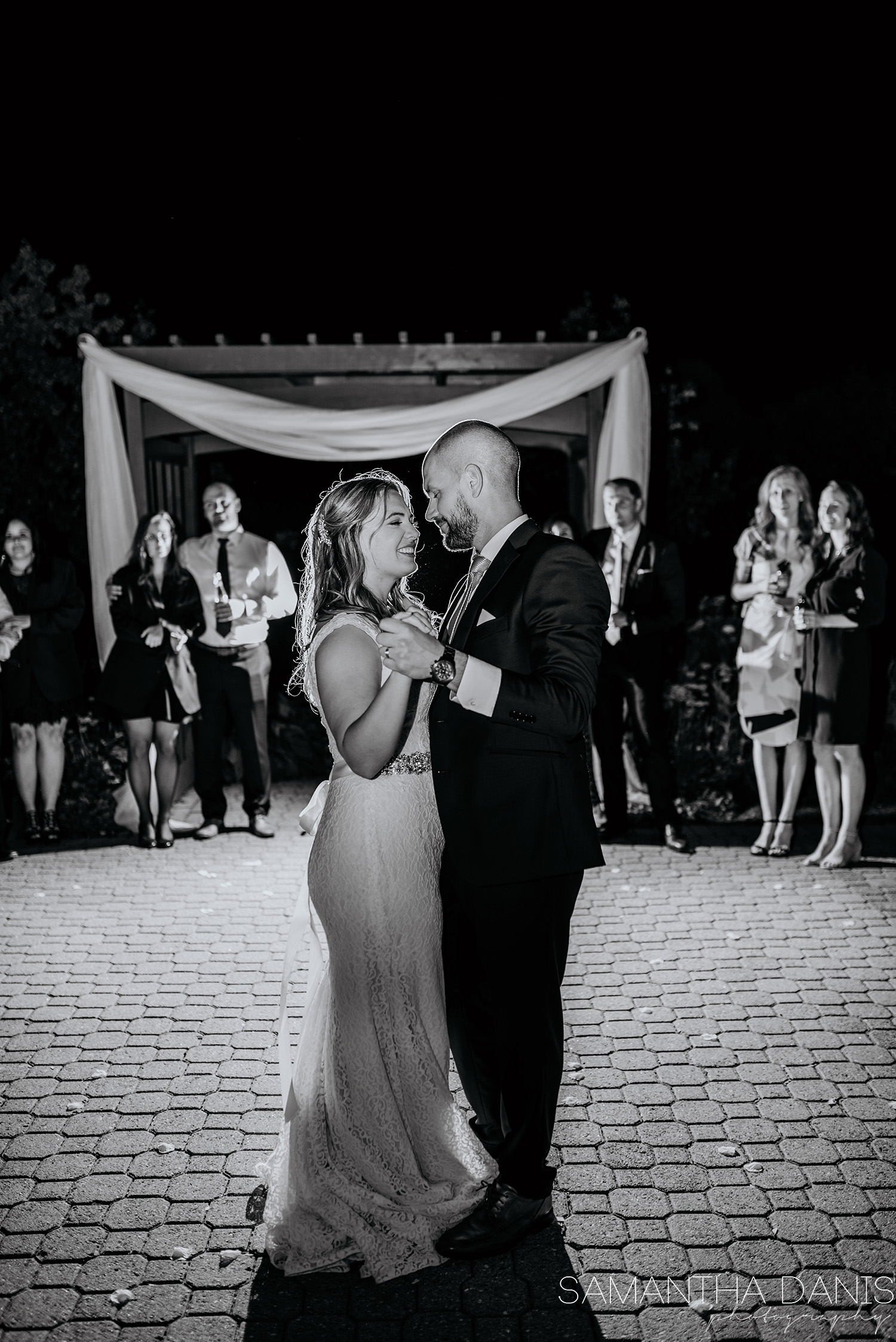 Kristen and Rick, I want to thank you for being the absolute coolest people I’ve ever met. You guys were so relaxed through this whole process and you made love look and feel so effortless. I knew you were meant to be the day I met you at that Second Cup. I hope your honeymoon is as freaking fantastic as it sounded when we chatted about it and that you are having an AMAZING TIME. May these photos take you back and bring you so much joy. Love you so so much xoxox 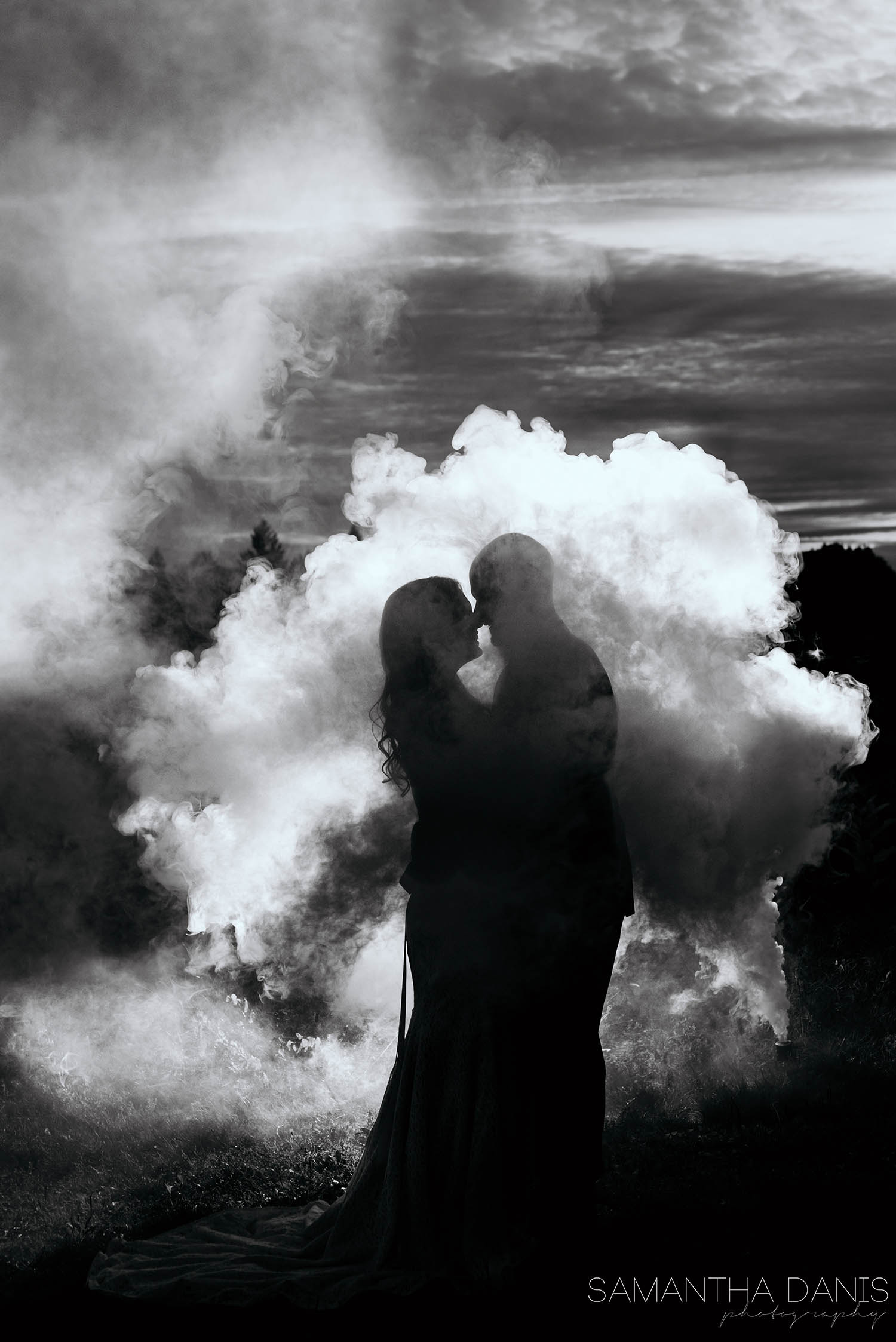