On Saturday May 13th we (myself, Jen & Nathan’s family) travelled from little old Montreal to the beauty that is Jamaica. Jen & Nathan had already been at the Grand Bahia Principe resort for about a week at this point, think about it as their pre-wedding honeymoon. And met us at the front lobby with gift bags full of goodies, a smile and a lovely tan, or burn in Nathan’s case. Since we arrived at night, we spent the evening getting ourselves settled in until the next day. Sunday came around and it was a lazy day by the pool until everyone met at the wedding gazebo to do a run through of how everyone was going to be place, like a rehearsal, only with a lot more rain. We kept our heads held high though and just hoped tomorrow would bring us some sun and so we went about our evening and awaited the wedding day with much anticipation.

And so it came to be, May 15th, and the big day. I started my day off with the girls at one end of the resort. They were all beautified by the wonderful Amanda of Makeup Design by Amanda Wanamaker and just hanging around the room munching on some awesome room service food (I was a little jealous of them). A quick detail session and off I was running over to the boys. And to my surprise they were pretty much already dressed. All that was left was to open their gifts and to put on some finishing touches. Their gifts by the way, were these adorable colourful and patterned socks as well as some always lovely alcohol. 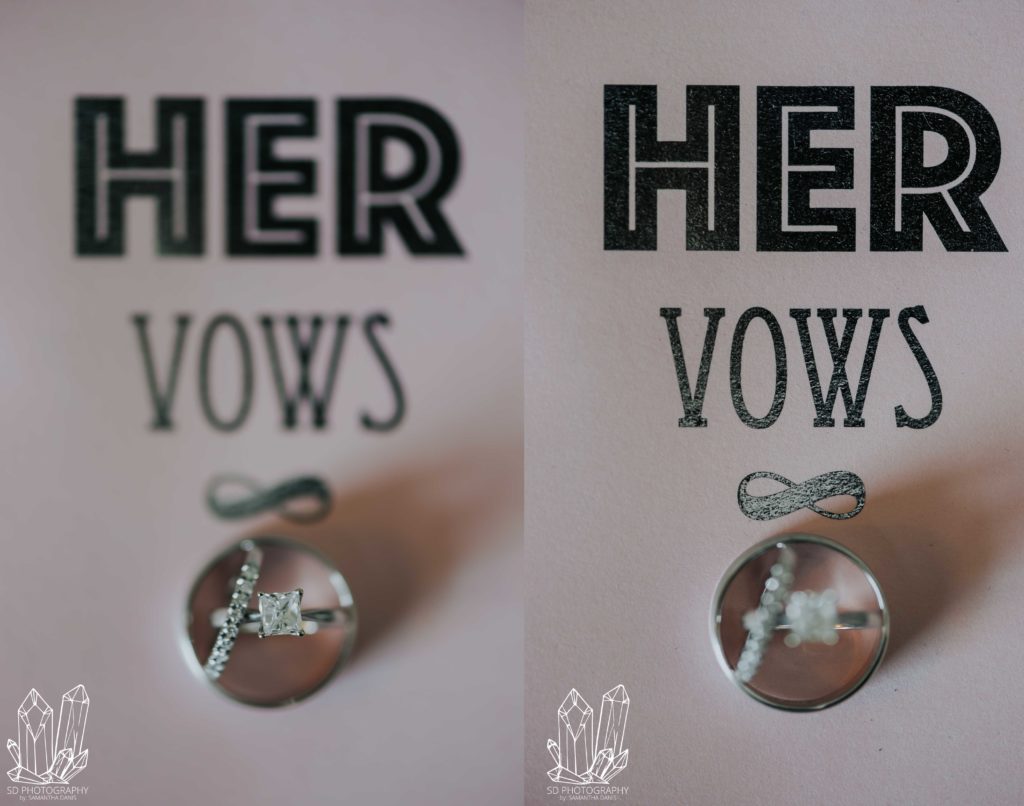 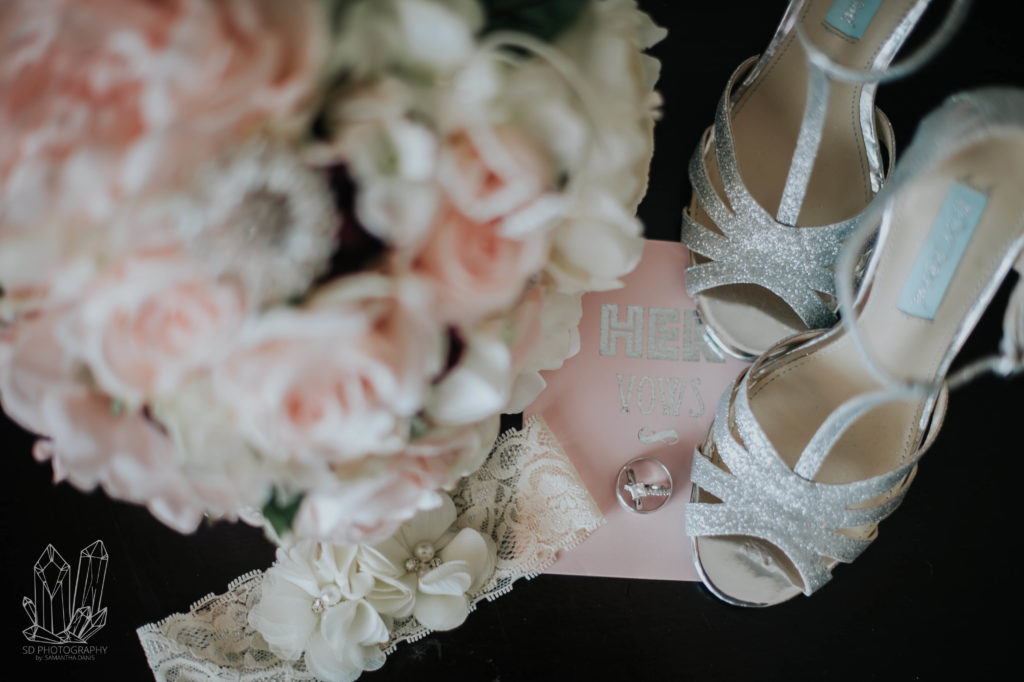 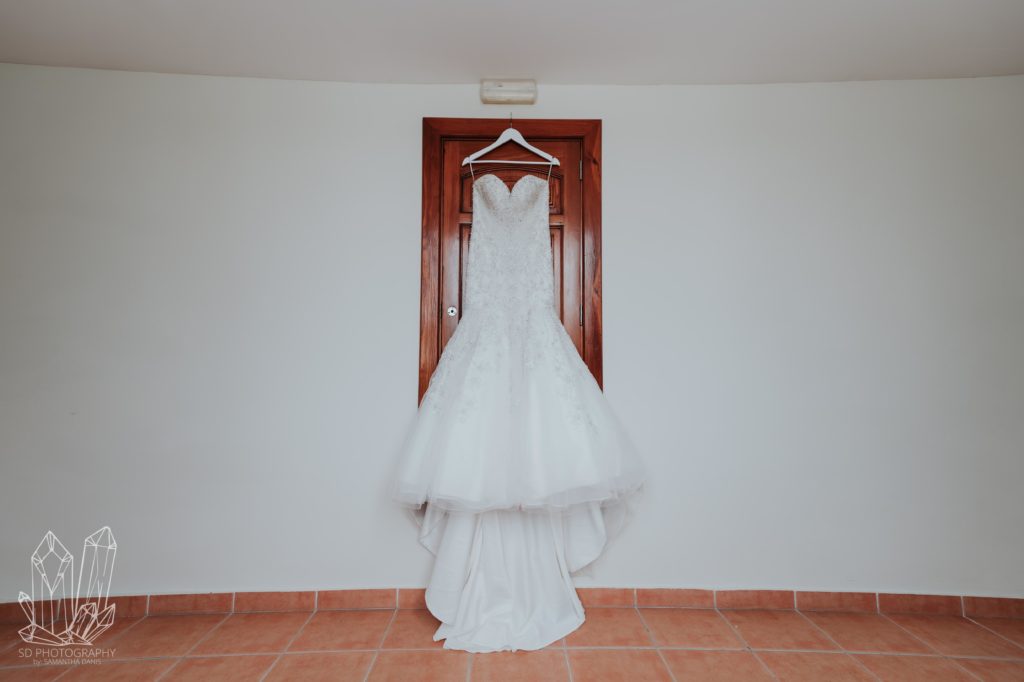 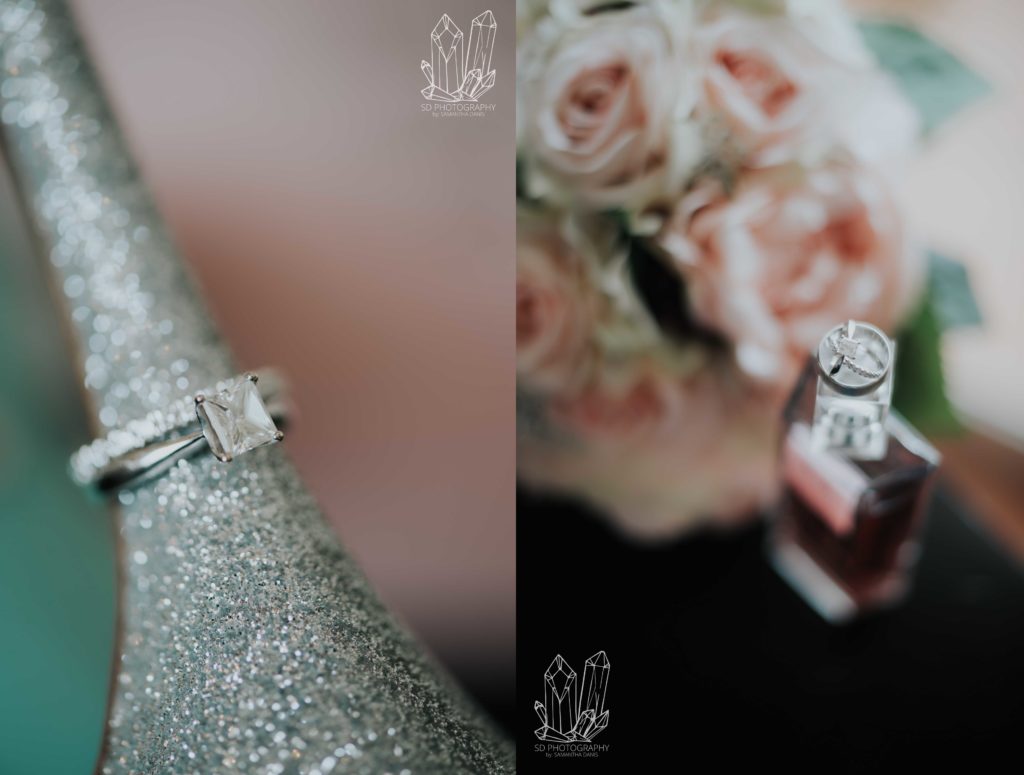 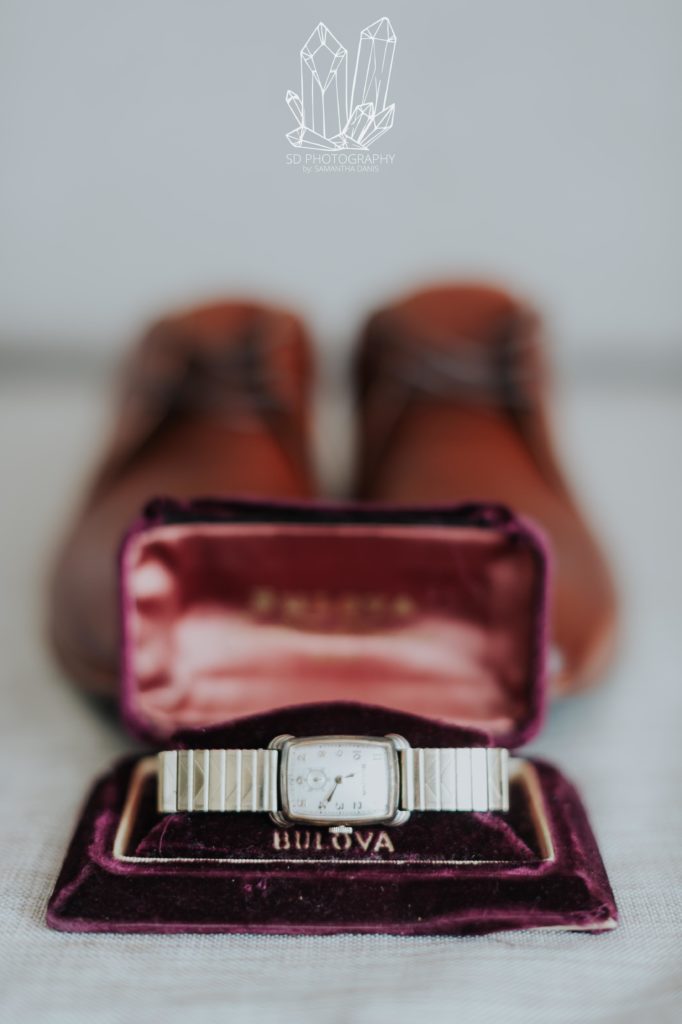 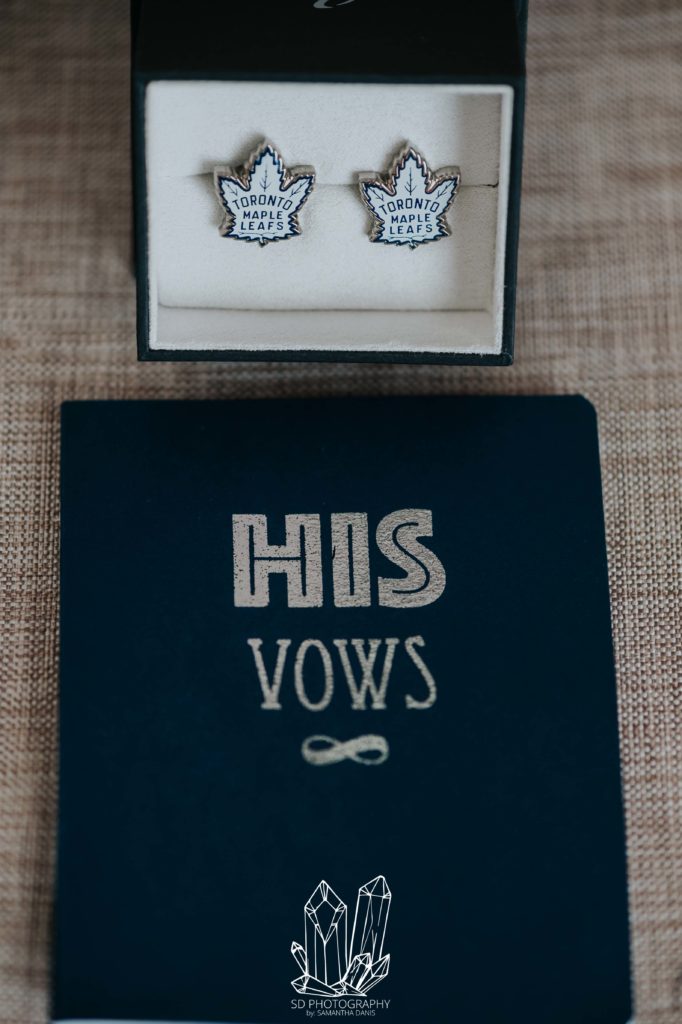 And so, back I was running over to the girls to get those final getting ready photos. The girls stepped out of the room to allow for Jen to get dressed, with the help of her mom Sonja and her dad Stephane. We had a little situation there for a minute where Jen was actually stuck in her crinoline because well for one, it was on super tight and two, the knot could not be undone but it had to be because we had to put the crinoline under the dress and put them on together! So we rushed around the room to find a fork to get the knot undone and thank god we did cause it would have been interesting to try and get Jen in that dress. With everything said and done, Jen was in, tightened and as stunning as ever. Sonja even struggled to hold back the tears as she looked at her little girl. A few finishing touches with dad putting on he rnecklace and it was time to reveal herself to her bridesmaids. Jen stepped out into the hallway to show her girls, and soon to be mother-in-law Sue, the final product of their early morning prep session. As the girls oo’ed and aw’ed Jen handed them gifts of their own with lovely hand written cards for each. Which pretty much made all of them cry, especially Sonja, but that’s just a given. They were each given a beautiful pair of earrings and in Myriam’s case, a beautiful bracelet. A little touch up and off we were to get married, well Jen and Nathan were :) 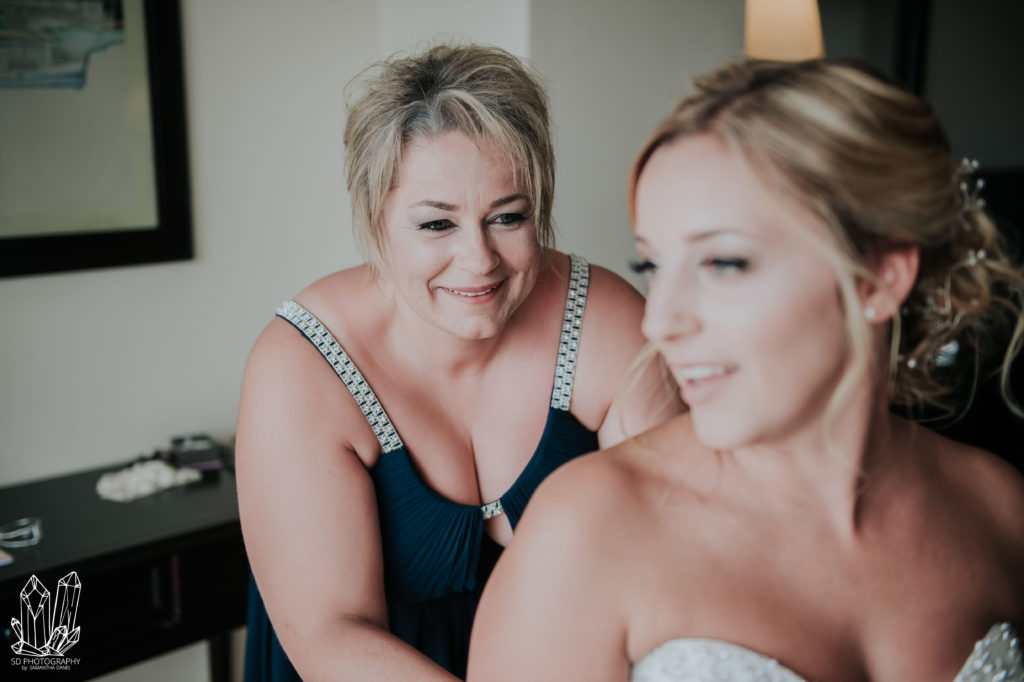 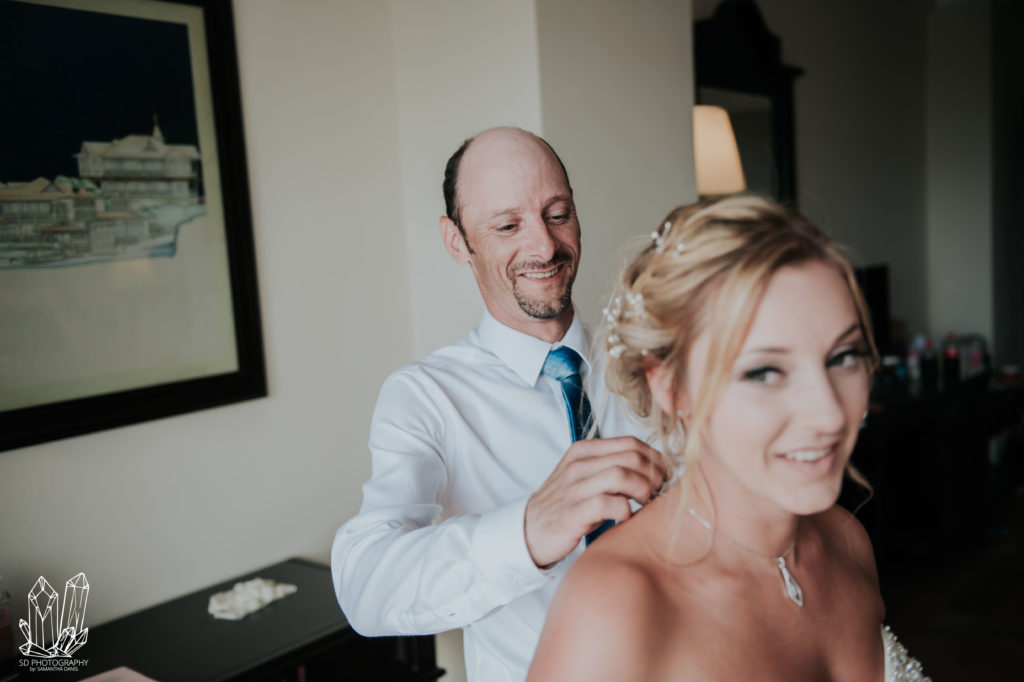 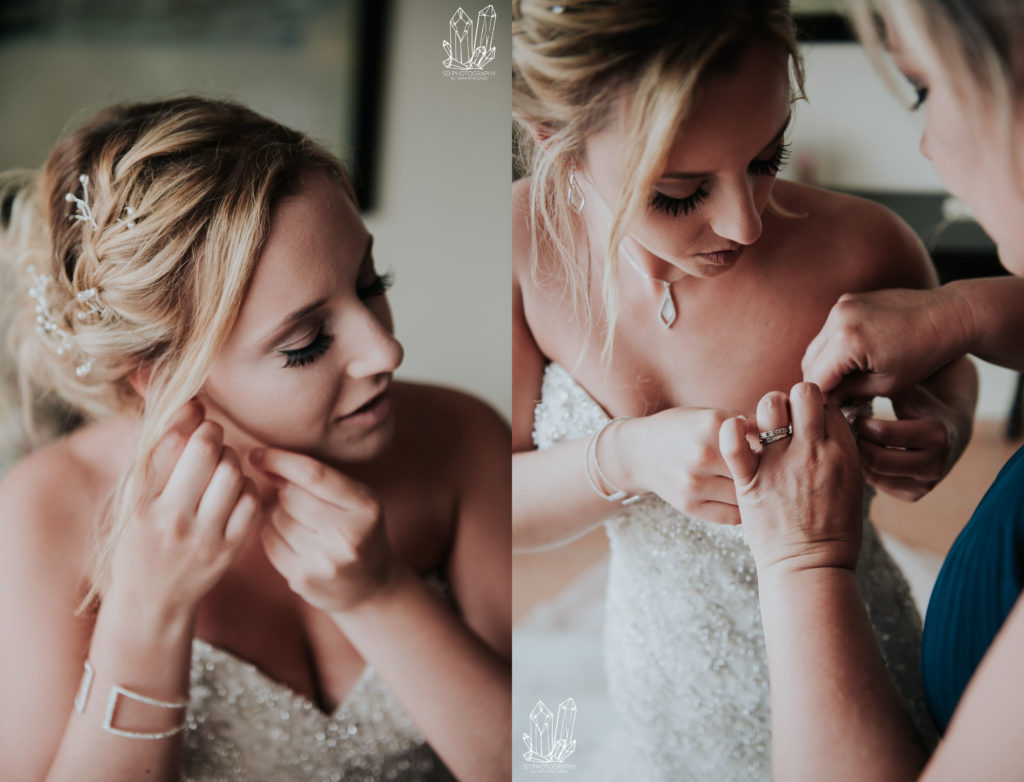 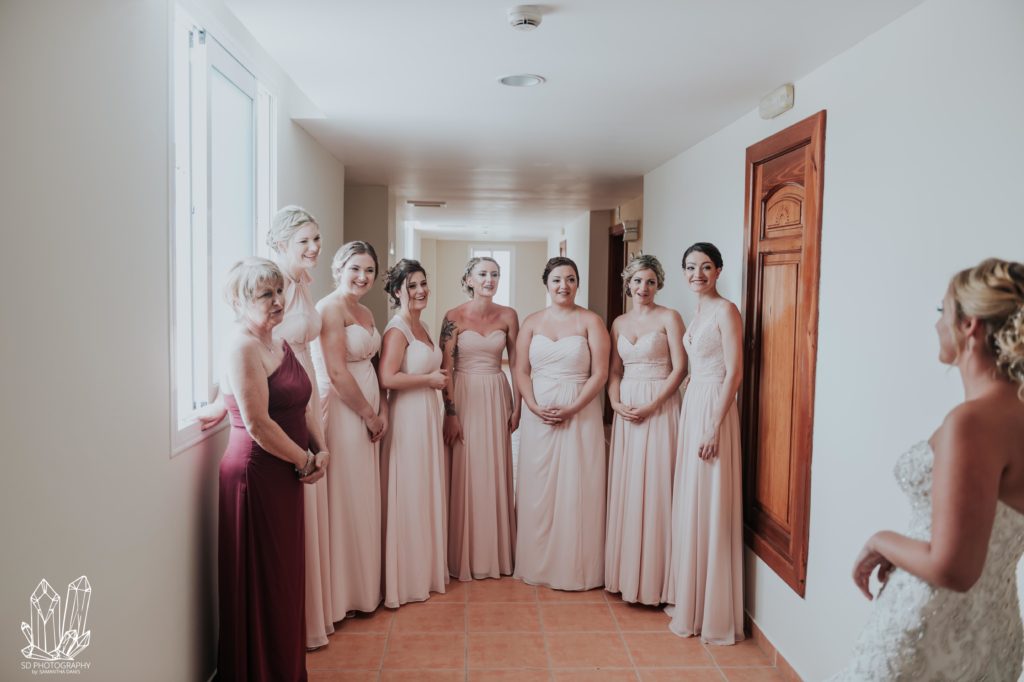 The ceremony space was beautiful, decorated with white, pink and navy ribbons, white chairs and a little touch of colour thanks to the floral arrangements. Not to mention it over looked the ocean and they had a band with steel drums playing, the atmosphere was just perfect. While the boys hung out at the Gazebo waiting for the ceremony to start they sang along to the band making to wait all that much more fun, especially Ben, he was just having the time of his life up there. The boys awaited patiently at the front as the girls made their way down the path from the beach. I wasn’t sure how Nathan was going to react to seeing Jen but surprisingly enough he held it together and just had a big smile the second he saw her and her white dress come into view. 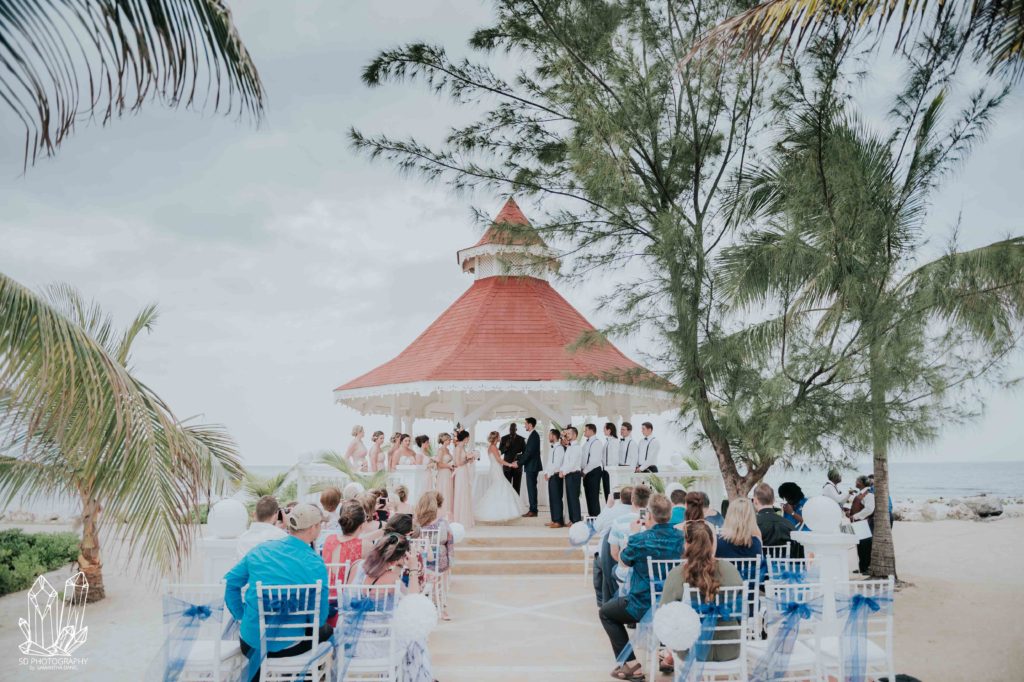 The ceremony was beautiful, so much that both moms simultaneously shed tears at the same time with Sue giving Sonja a tissue while Stephane, Jen’s dad looked on at them smiling. Their vows were beautiful, written in their very own His and Hers vow notebooks. My mind is currently a blur but I remember them promising the sweetest things to each other that even I had a seat and just listened. They then lit up their unity candle, which no thanks to the wind was quite the task. So much so that Nathan actually had to take his jacket and surround the candle to let the wicks actually catch fire. With that said and done, a quick signing of a certificate, they were officially OFFICIALLY husband and wife. A quick kiss, a walk down the aisle and a toast with the wedding party and off we were to get some beautiful scenic shots around the resort. 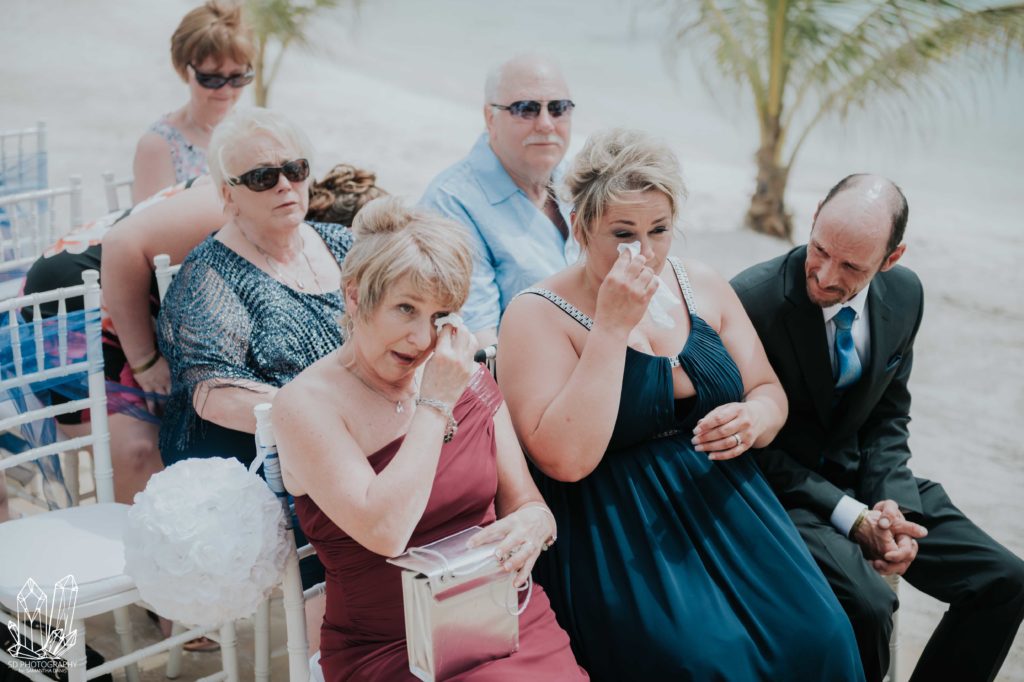 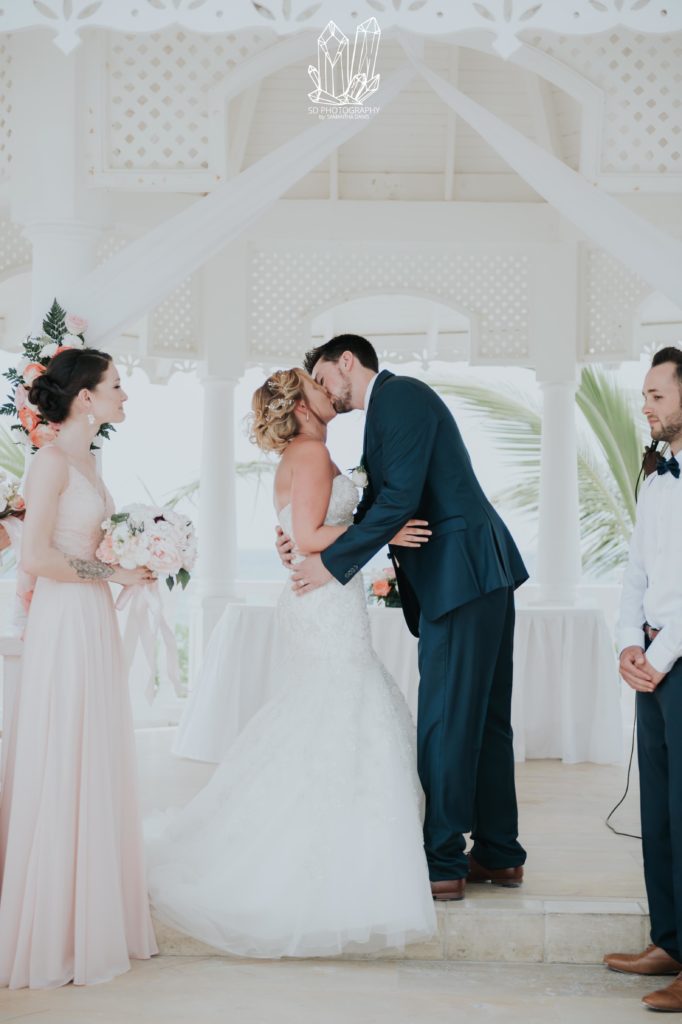 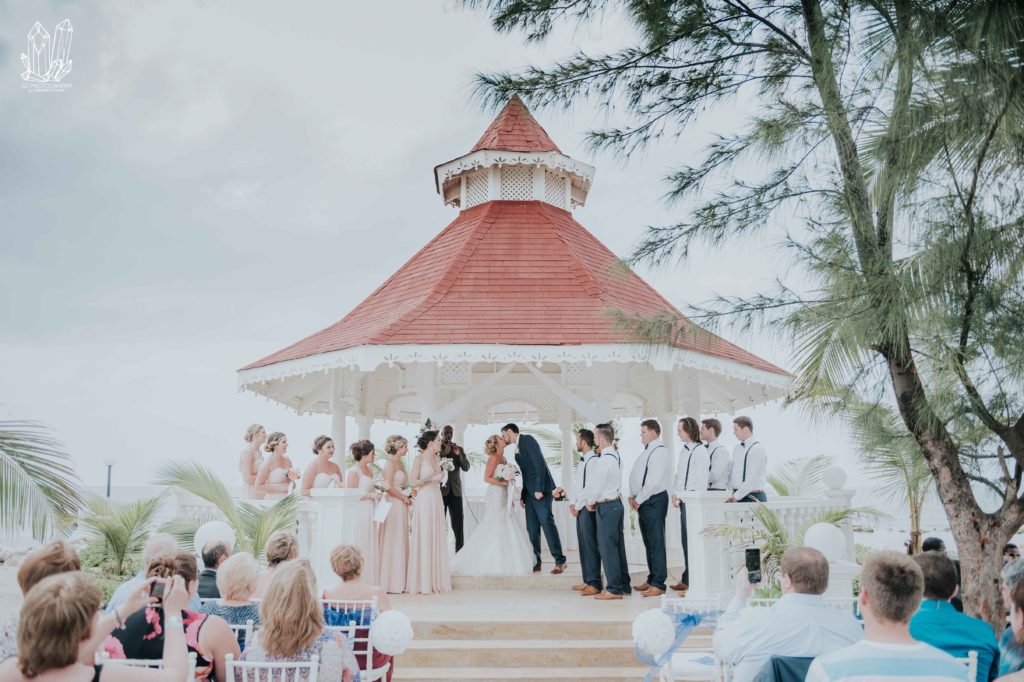 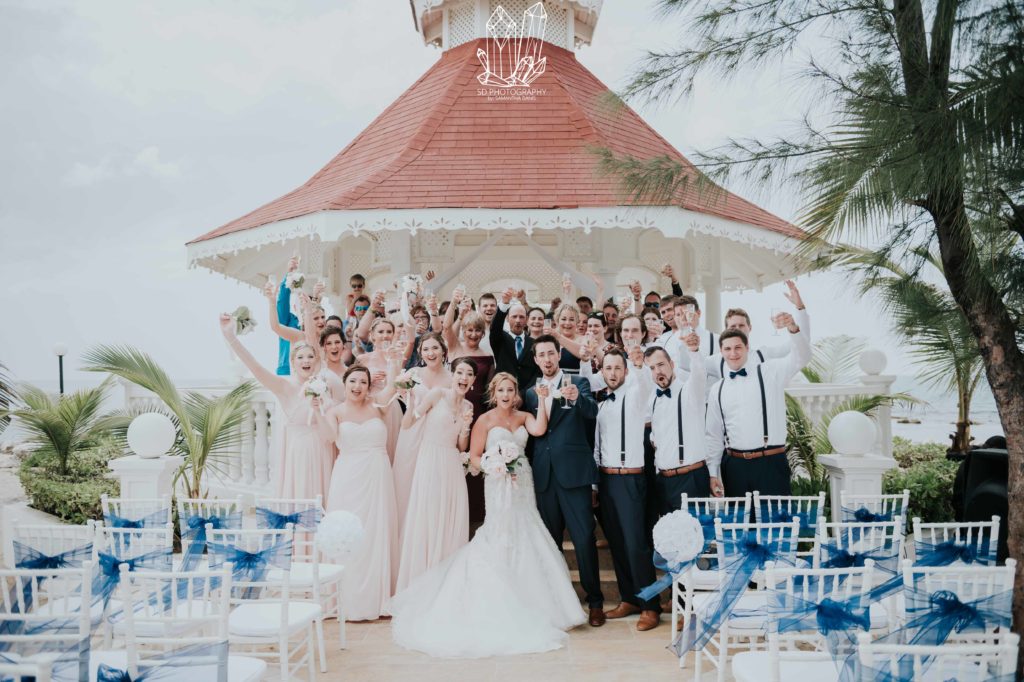 We stuck around the wedding site to get some family photos done as well as to get some bridal party photos done, but it wasn’t long until we were on our way down the beach and on the hunt for some lush greenery to play in. We had a lot of fun and laughs thanks to the boys. I tried to do a laughing shot with the girls but none of them seemed to make a funny enough laugh to get everyone else going so the guys had to kick and luckily for me it work! We had a great time just being silly in front of the camera, at Jen’s request for a brady bunch-esque montage which I can’t wait to show you, but those are for later. A few more shots and Jen, Nathan and I were off for some privacy. We walked along the beach just talking and I just let them be together for a moment until we found a little spot (which we weren’t suppose to go to) along the shore line. I let Jen get a few individuals in while Nathan watched on very lovingly at his bride. 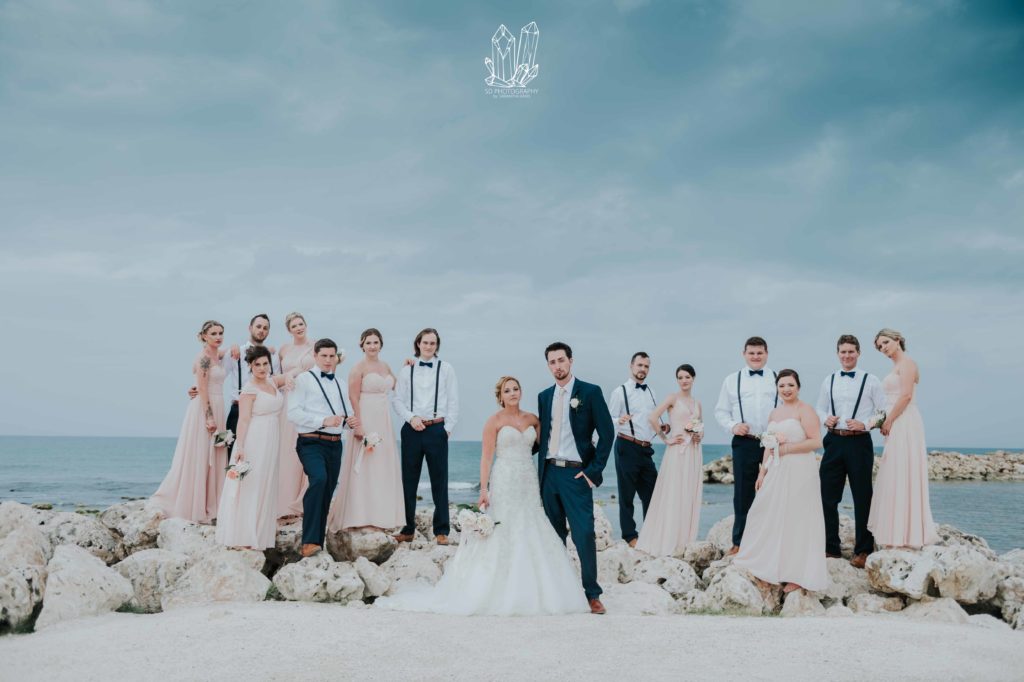 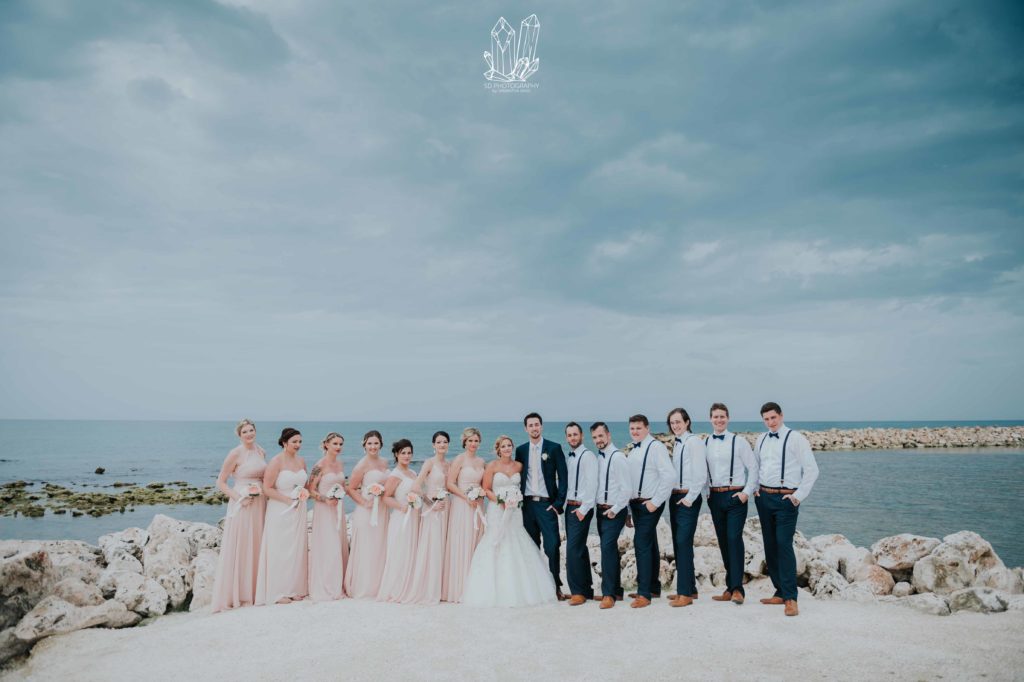 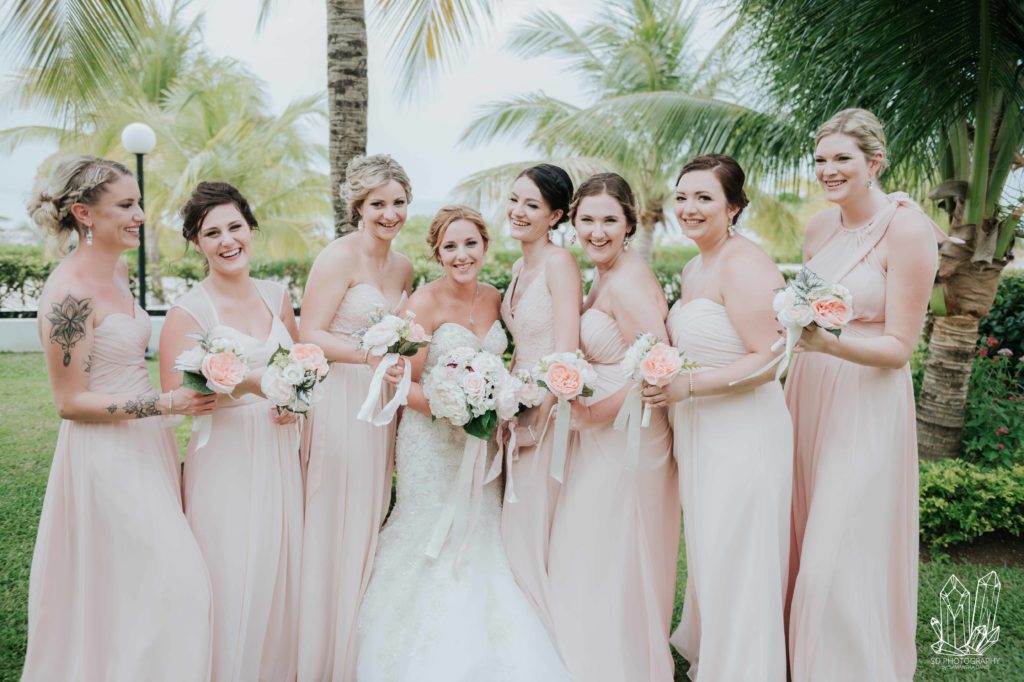 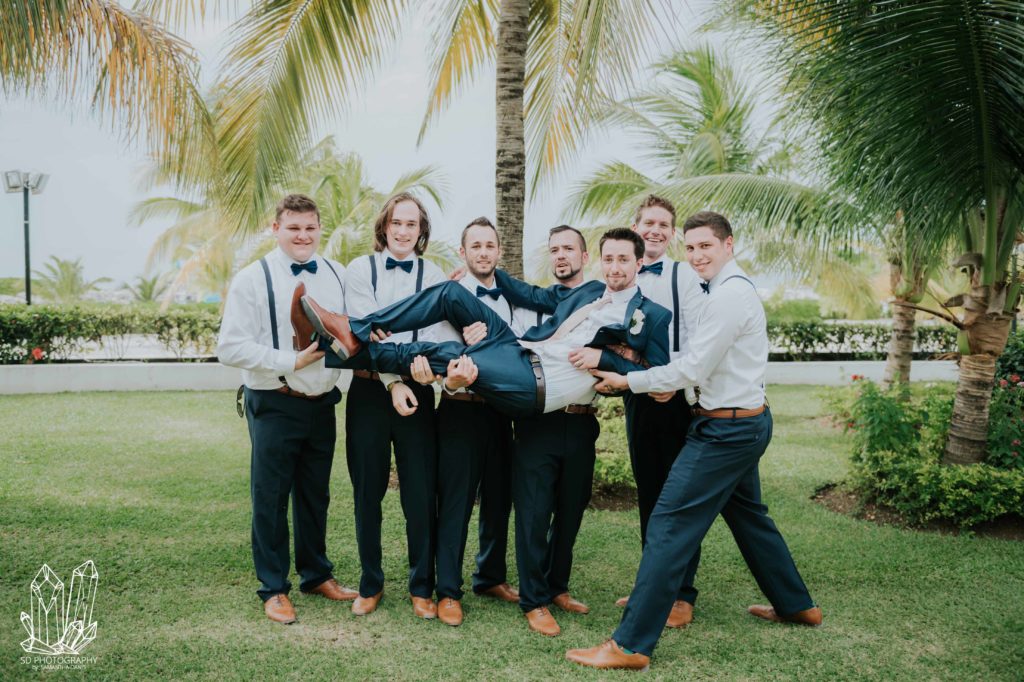 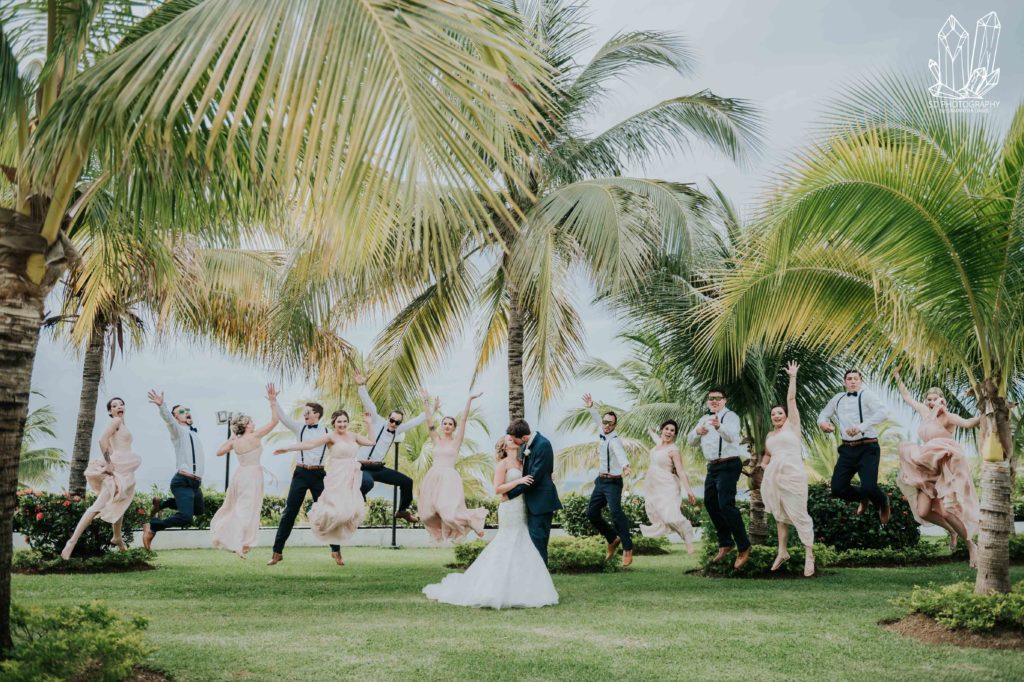 We played under Jen’s veil which she specifically brought for this one shot (yay veils!) and enjoyed the warm summer sun before we went to find some more greenery and shade to finish our session. We had quite a bit of time left before the reception so I sent the happy couple on their way to take a break, get some water and some air conditioning, this is Jamaica in the summer after all. We were hot and it was time to breathe before the festivities. And I’m not complaining because we got the one day of the week where it did not rain in the afternoon! An hour and a half later and it was dinner and party time! 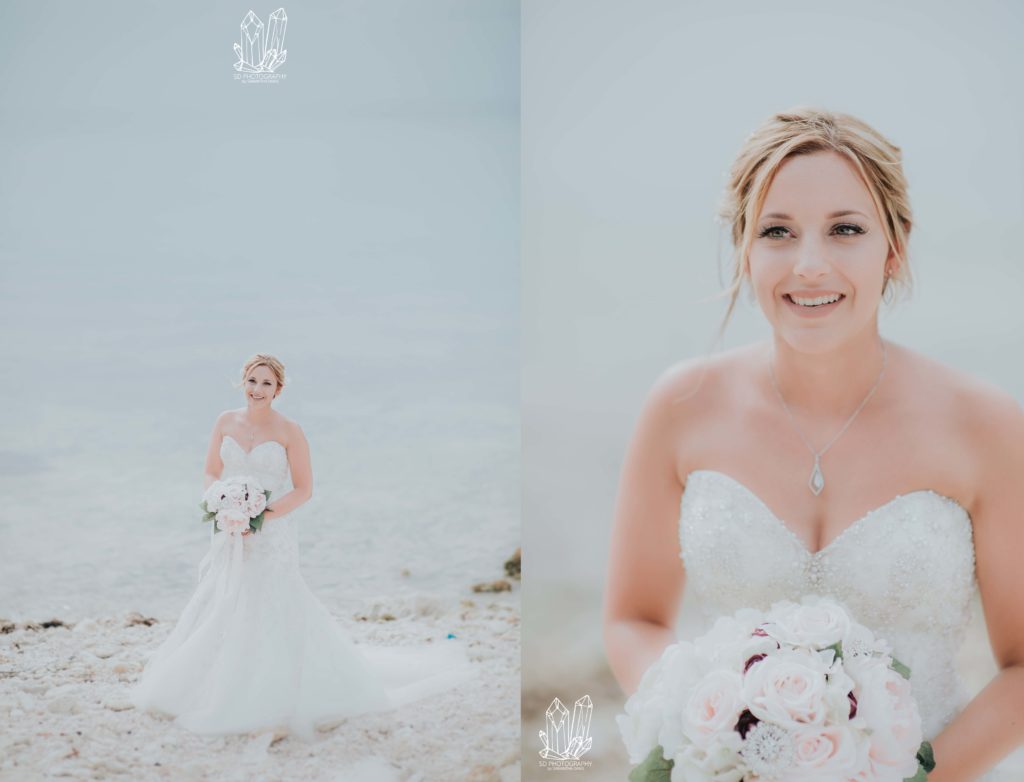 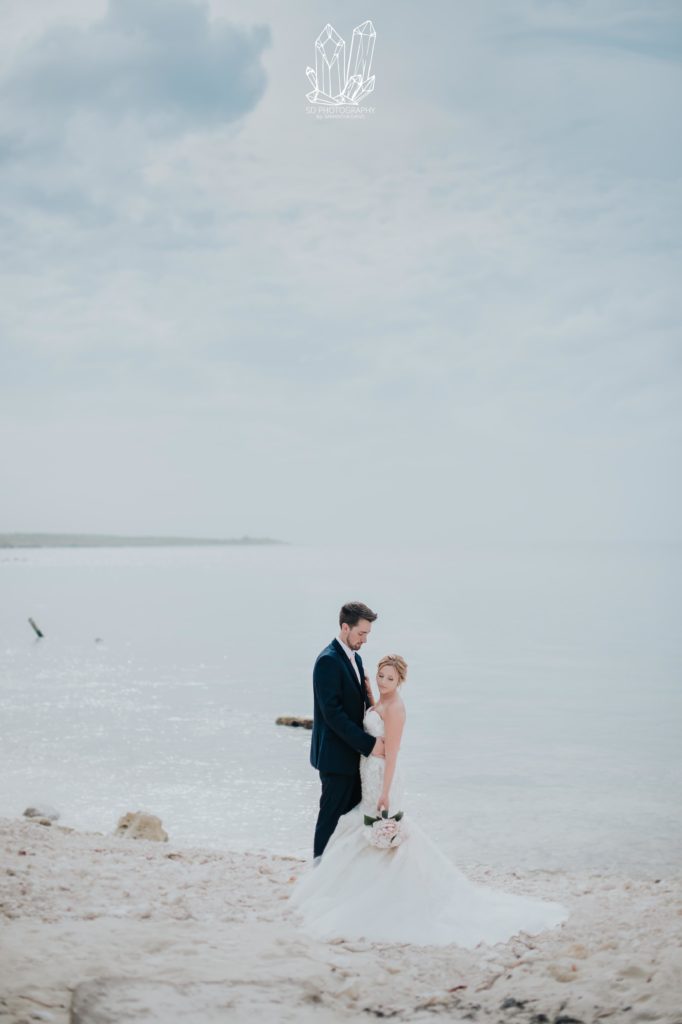 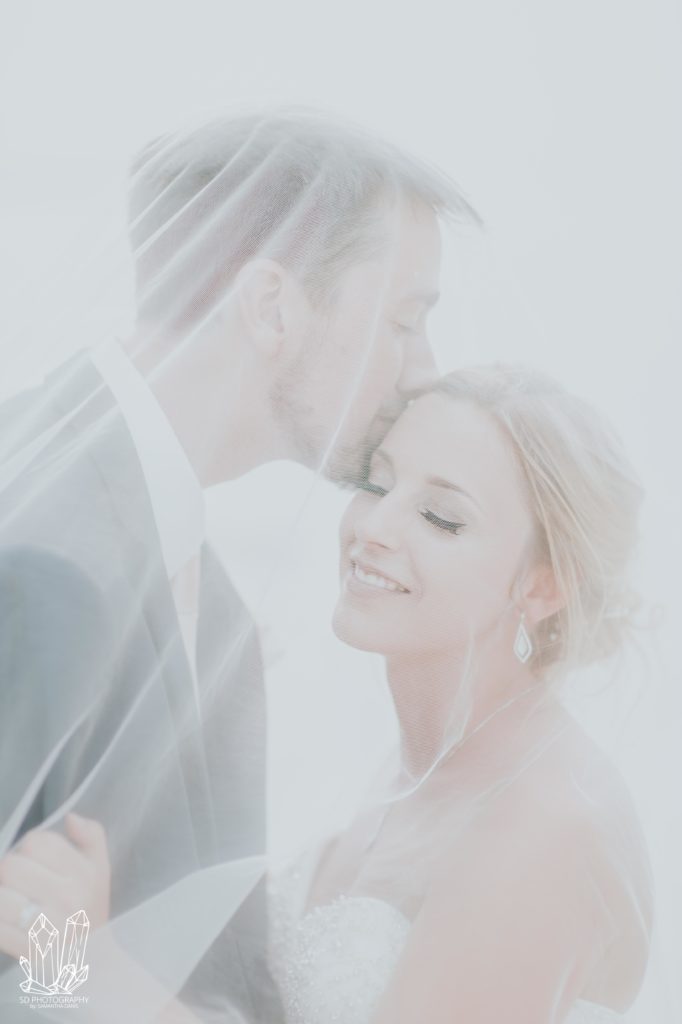 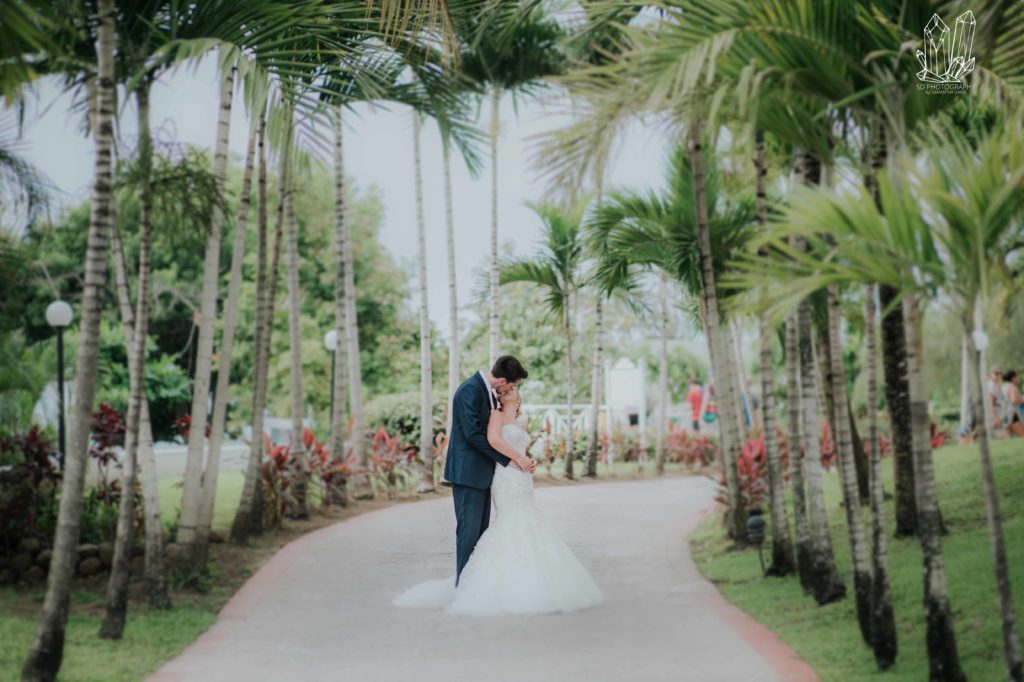 The Reception was held in a private tent off the beach on the far side of the resort. Everything was white and bright with a few pops of colour thanks to Jen’s wonderful colour palette for the wedding. Blue ribbons tied to the chairs, different shades of pink lanterns hung from the ceiling, the girls bouquets served as the centerpieces and a super cute table greeted guests at the entry. It had marquee initials, a love light up light, some candles, a beautiful box and a Polaroid camera that would later serve as their guest book. I Snuck the happy couple away just as the sun was pretty much completely gone from sight for a few more photos along the peninsula. They laughed, hugged, jumped and dance in the starlight before heading back to enjoy their main meal with their guests. 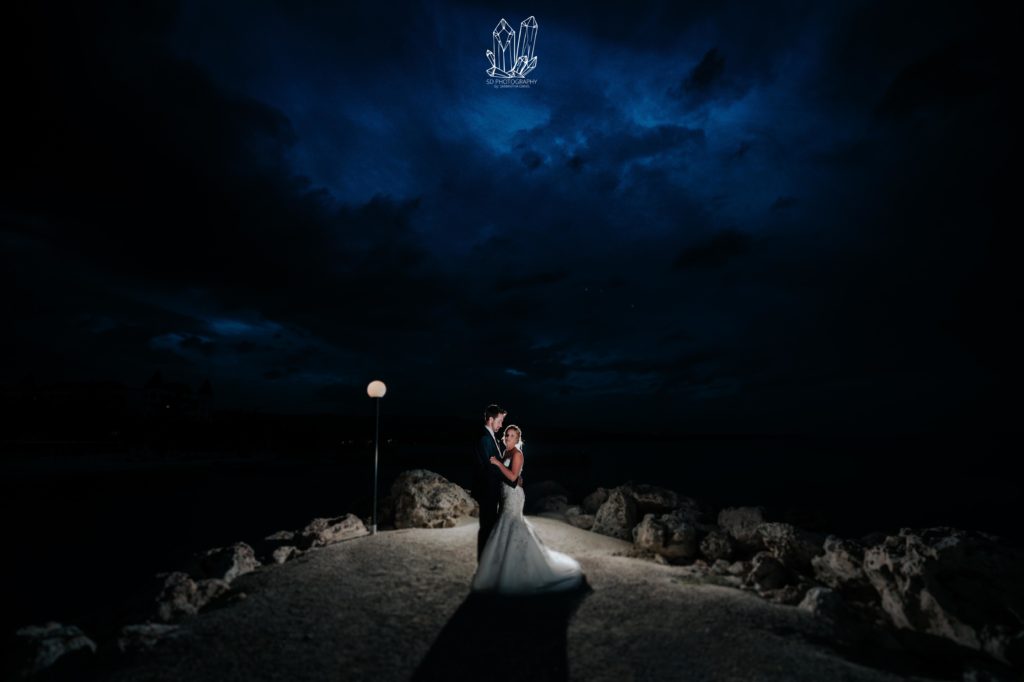 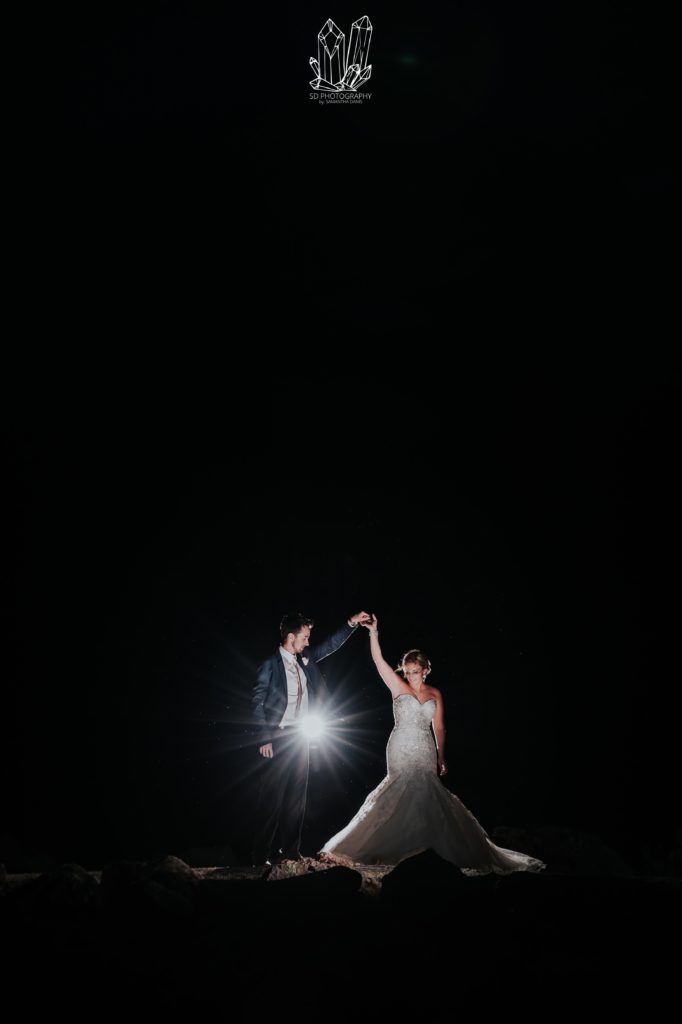 There were a few speeches done by Nathan’s lovely sisters Leigh-Ann and Renee (who cried of course) and it made everyone else cry and smile including Jen and Nathan. A quick cutting of a beautiful White cake with two flamingos on top and it was time for the first dances. Jen & Nathan were in their own little bubble as guests watched on, Lovingly staring into each others eyes and hardly ever looking away. It was a moment just for them. Jen then danced with her dad and Nathan with his mom, and of course as I couldn’t help myself, and sang along to the music and swayed with them just enjoying this time for them. It didn’t take long for the crew to join in and start dancing their butts off though! The boys took their button up shirts off, kept their bow ties and suspenders and made their way to Jen. To my surprise they sat her down and danced circles around her like the hilarious fools they are! Jen’s face was just in awe of what was happening around her, I loved it. A few shots of tequila (eww guys), a few pictures with the polaroid and the party kept going. It was down pouring at this point right outside the tent but nobody cared because they were having such a good time! I mean just look at them dancing away. All in all what a wonderful day it was and again, how lucky were we with the weather? Thank you Jen & Nathan, and your family of course for allowing me to come down to Jamaica and participate in this memorable day with you. Enjoy xox 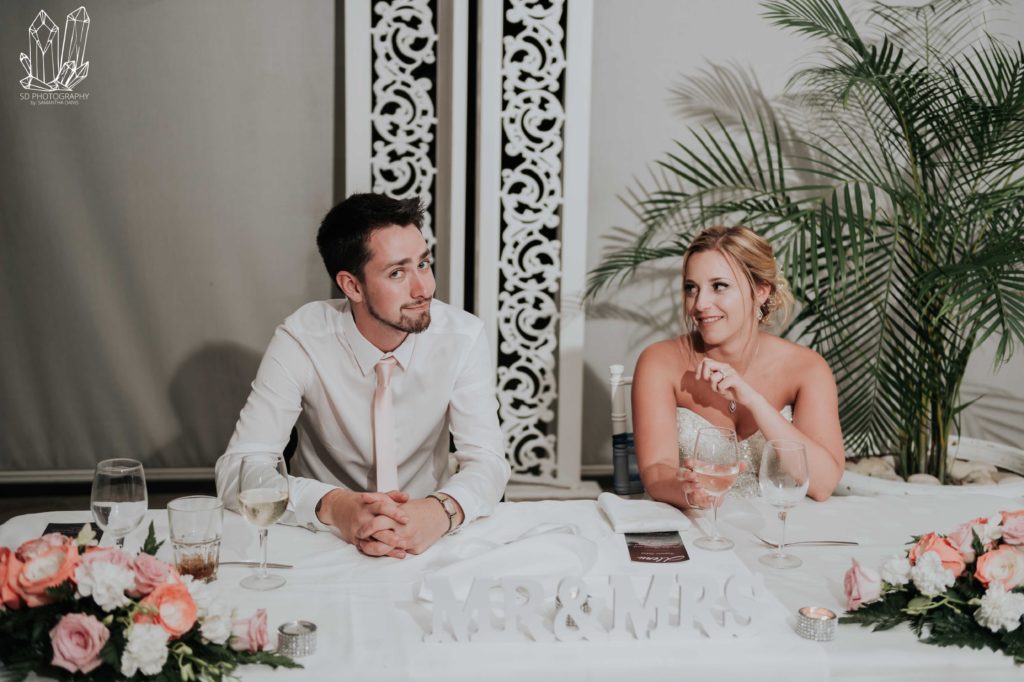 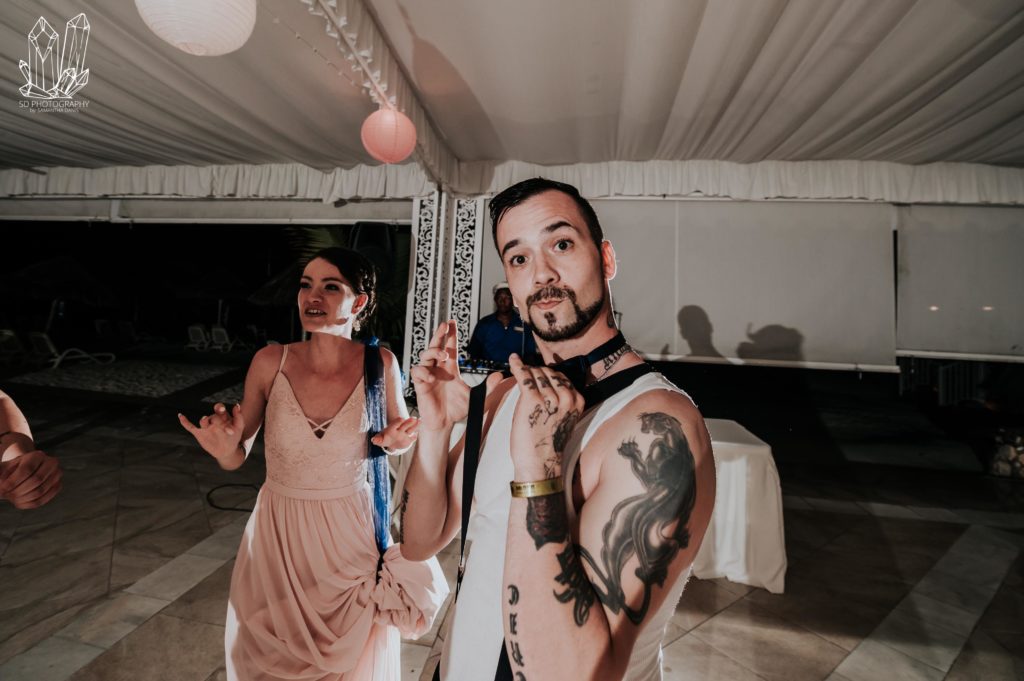