I have been waiting for this wedding since last year!!! And it has come and gone and was beautiful beyond words, with a few interesting situations for myself throughout the day. Keep reading to find out what happened to me, it’s funny, I promise.

I met Janie & Justin last year in Val D’Or at Marie-Eve and Michael’s wedding… Actually, come to think of it, I think I met them in 2015 at Val & Mat’s wedding but it wasn’t until Val D’Or did I really get to know them as they had just announced their engagement at the reception! All this to say, it’s been a long time coming. These two were set up on a blind date by some friends and I’m pretty sure Justin knew he was going to marry this phenomenal woman that very night. About a month after that date, Justin left to study abroad in France making this new relationship a long distance one. Even with everything they’ve faced over the past few years they’ve managed to make it work and it brought them here on this glorious day.

It was hot and sunny and I knew we were in for a good one on my drive over to Wakefield. I was about 10mins out from the boys when I get a message from Justin asking me if I could meet them at the cottage his brother had rented for the weekend rather than at the mill like originally planned. I was totally in for it, why not change it up a little. I arrive to this little chalet not thinking much of it only to walk through a small room and end up in this monstrous great room fit for a king! It was huge with super tall ceilings, a cool wooden sitting area looking out over the forest and a huge flat screen tv. It was the coolest dude pad to get ready in for sure. I was met by his three brothers which all had their very different personalities and it was just so fun to watch their dynamic as a family. We wandered around while getting ready and chatting and got his brothers to help him get dressed. As I learned, Justin isn’t very flexible so he truly did need his brother to put his jacket on which was very sweet.  Justin got a nice drink for his boys as we cheered out on the balcony and went out front to take a few photos. As we walked out Justin realized the videographer wasn’t there… Oh no, he forget to message him like he did me to tell him about the location change! So we called him up right away and he made it just in time to take the outside shots. We ended the boys getting ready with a nice round of Mario Kart on the Nintendo Switch. How can this not be a good day when there’s sun, alcohol and Mario Kart? And off I was to see the ladies. 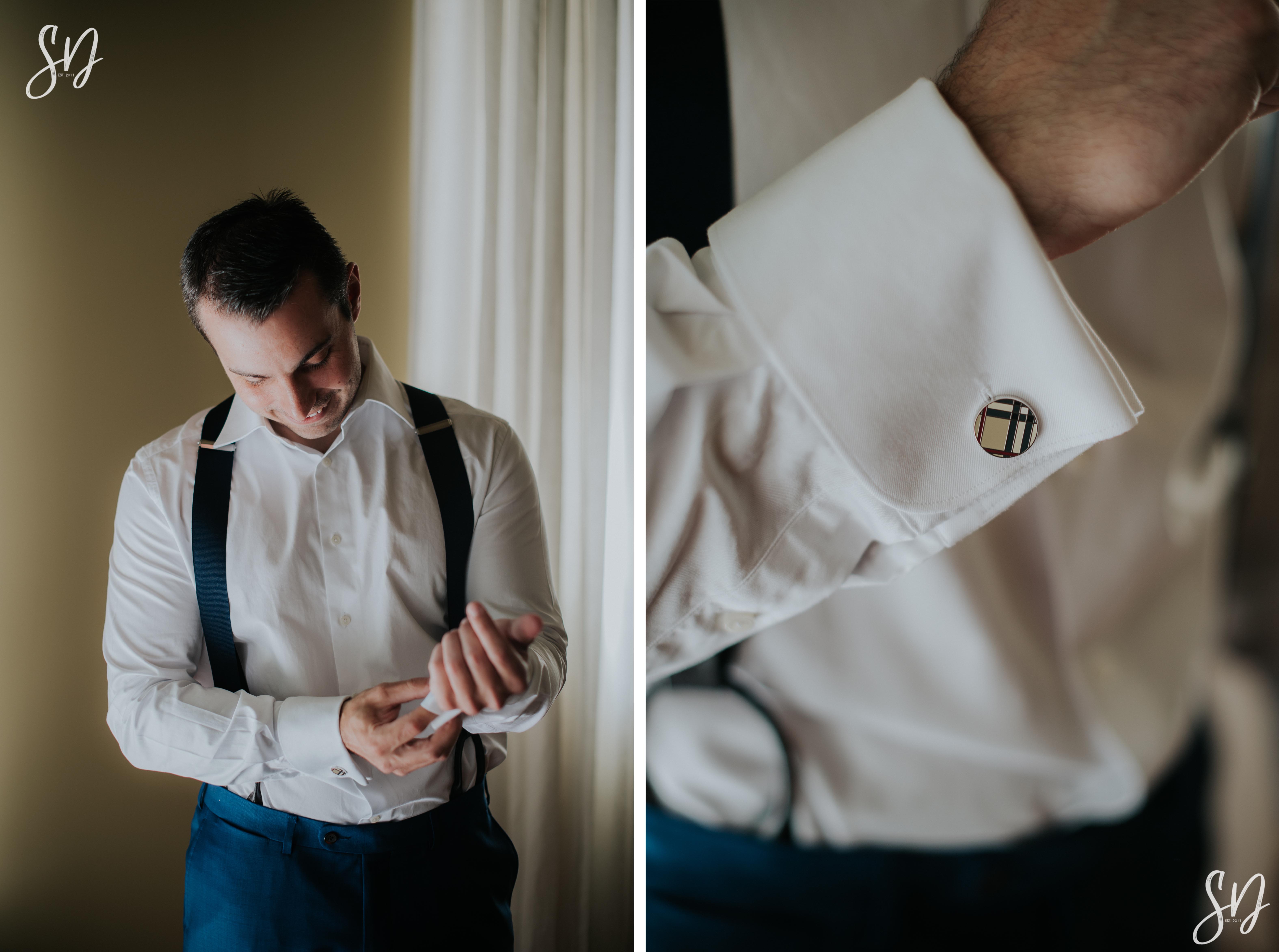 I arrived to find some beautiful ladies just hanging around in their robes and waiting for me to pop their champagne. After some gorgeous detail shots I decided it was time to get the party started! The girls went out on the balcony and Janie ever so gently popped the champagne. I was expecting the cork to go flying but Janie popped it like a champ and held onto it tight. We did get some awesome bubbly over flow before pouring a glass for all of her girls. It was time to get going though and get everyone dressed. The girls all got ready together in the suite upstairs and headed downstairs to help Janie with her finishing touches like her shoes, jewelry and veil. We did get an unexpected visit from Simon, one of our groomsmen, as you can see below! Once everyone was ready we went out to de the first look with Janie’s papa. They were both fine for maybe about 10 seconds and then the waterworks started. They both held it together pretty well but both of their eyes were full of tears as they held onto each other while the girls and momma watched on. We went out into the field for a few quick photos but it was time to get to the main room to get ready to walk down that aisle. 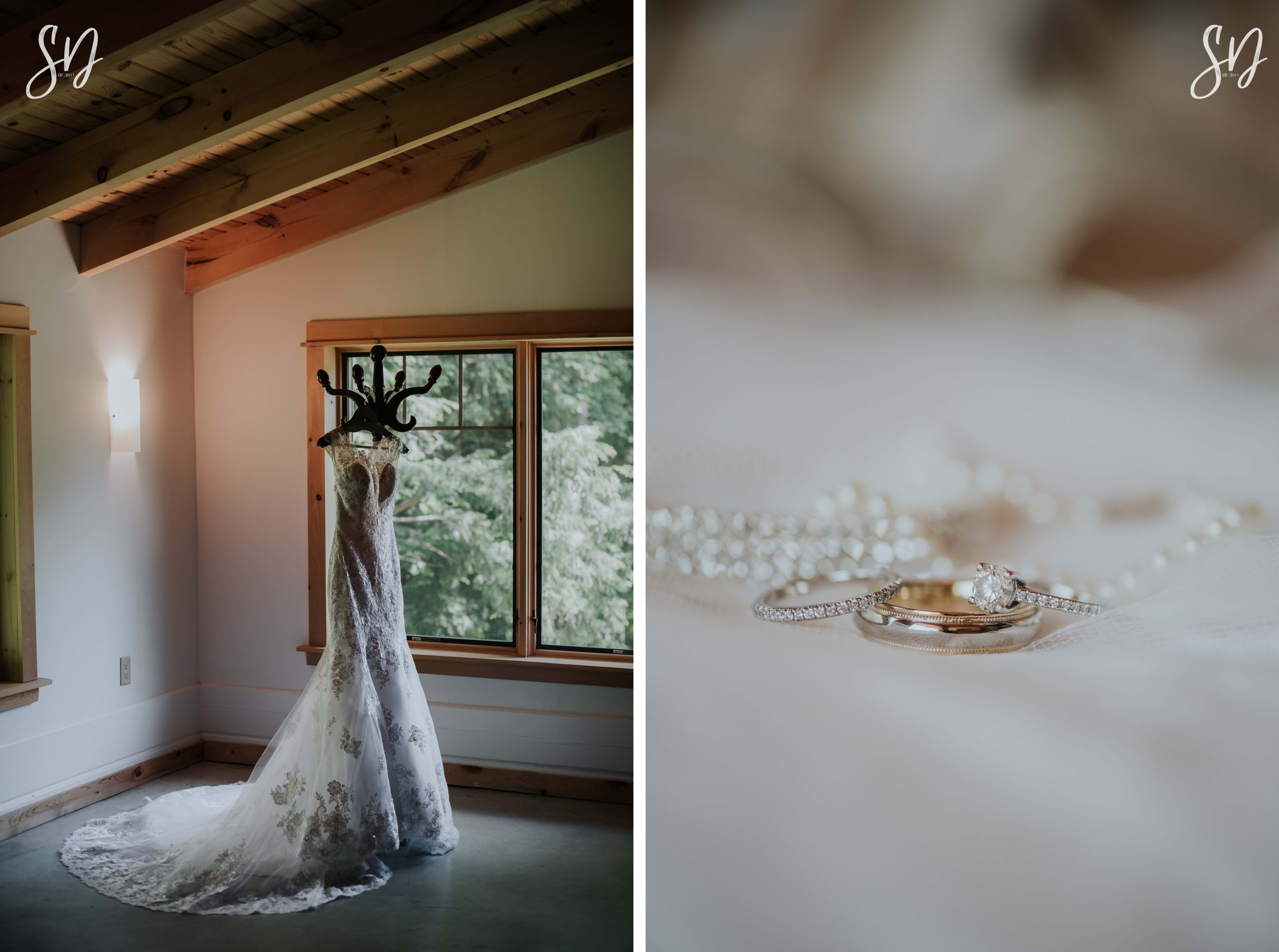 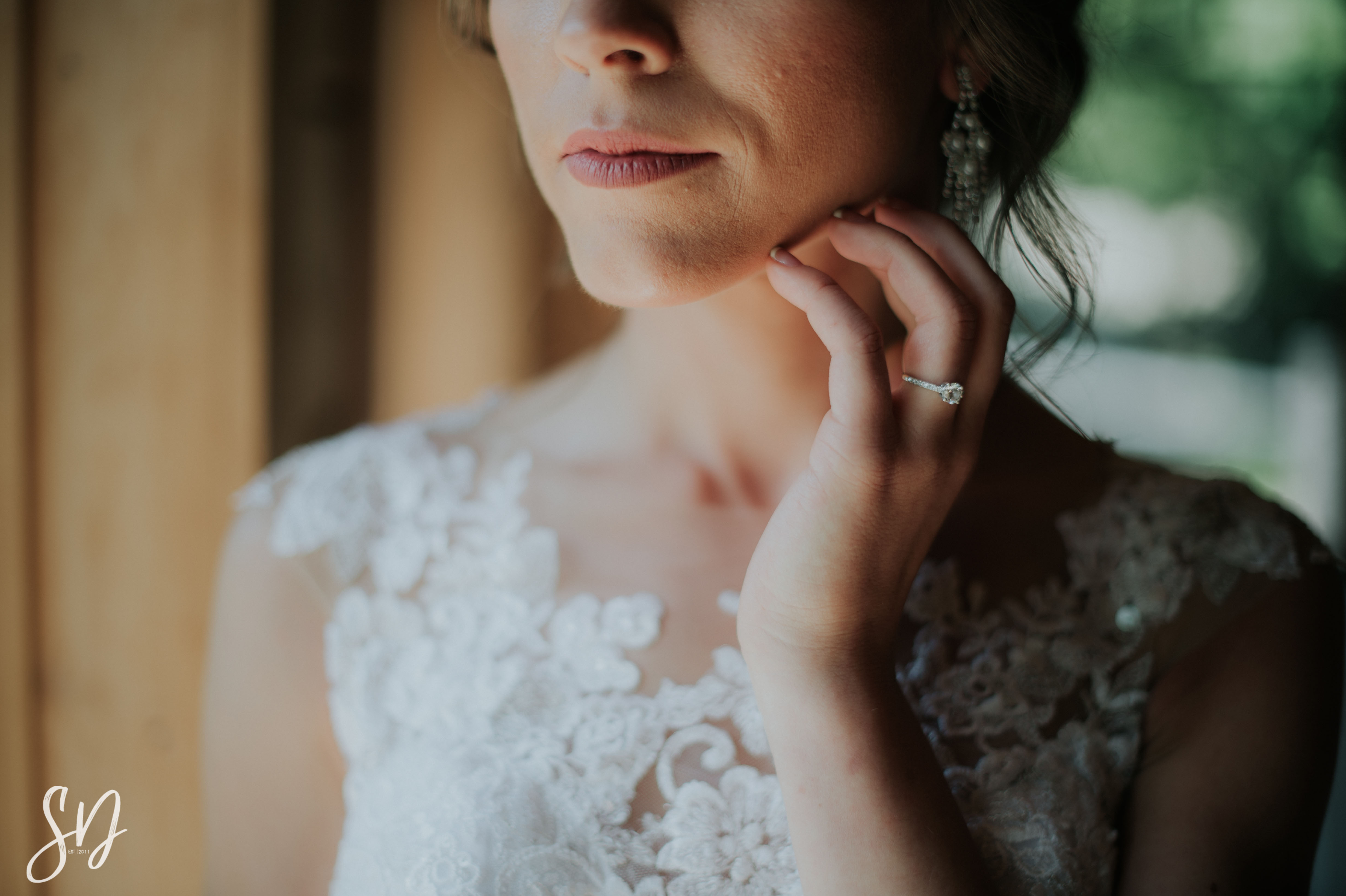 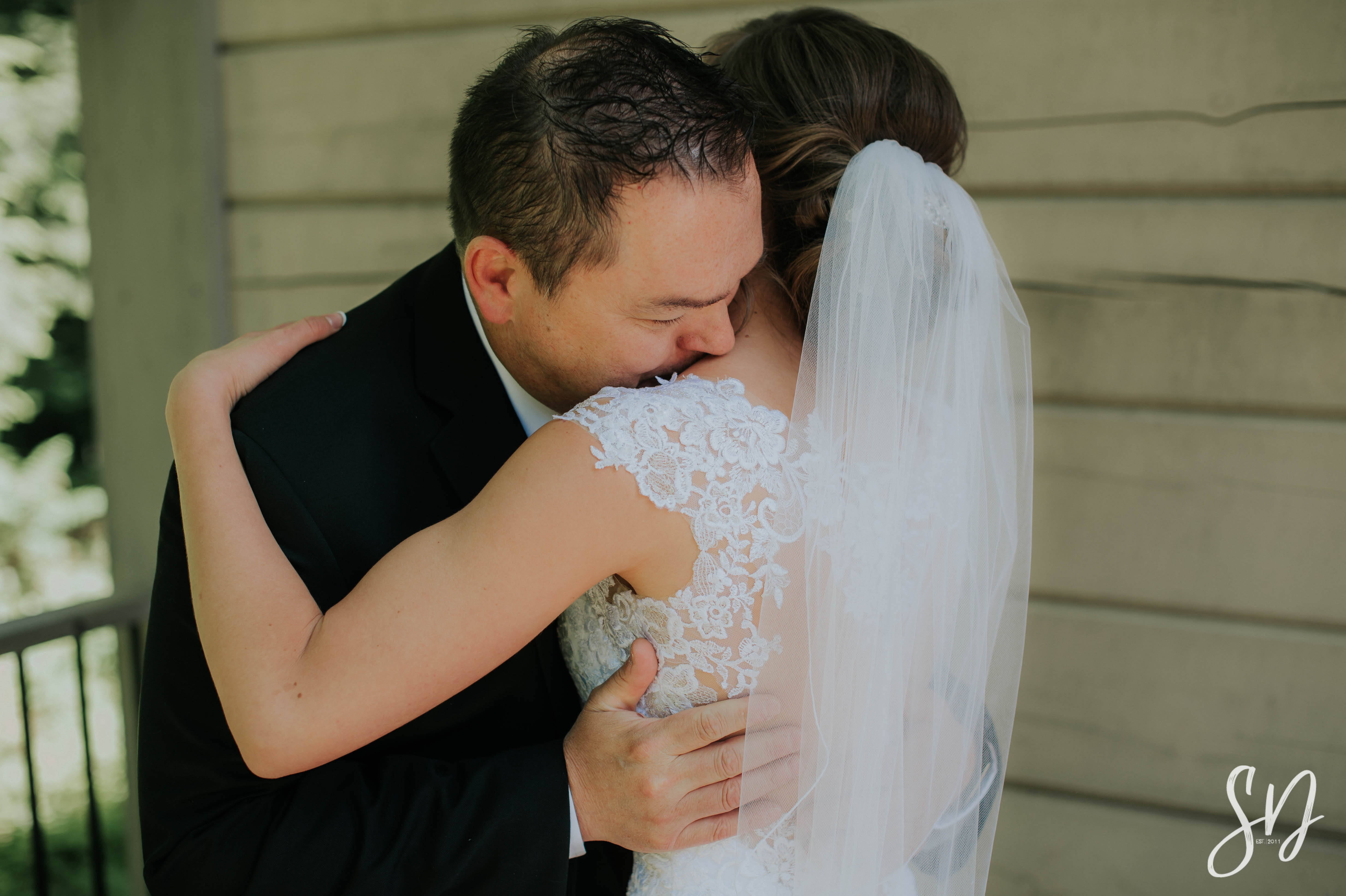 We had an amazing day which meant that the ceremony was going to be held outside on the terrace under the covered lookout looking over the beautiful valley. The guests came in abundance and filled the seats without a problem. Justin walked down the aisle with his mom quickly followed by the groomsmen and bridesmaids. The pause between them and Janie walking out was a tad longer to build up the anticipation and I could see the nerves in Justin’s eyes as he waited. He held his hands up front and took very deep breaths and the second Janie turned the corner with her dad he let out a sigh of relief, a big smile crossed his face and he looked to the floor to hide those emotions that I’m sure were bubbling inside. Janie was nothing but smiles as she saw her friends and family, but most of all her soon to be husband. The ceremony was officiated by Janie’s aunt and she did it with absolute grace and beauty. Both mum’s read beautiful passages before it was our bride and grooms turn to read their personal vows. Now I must say that after having shot well over 50 weddings at this point, ceremonies don’t often make me cry. I’m a very empathetic person and overly emotional in everything else in my life, but weddings don’t make me cry anymore… But this one did! Guys, I was bawling like a baby standing off to the side watching and listening to these two exchange such beautiful and caring words. In that moment, they were honestly alone with no one else around, it was about them, as it should be. EVERYONE was crying and sniffling, I had to shoot through teary eyes!!! Janie & Justin were a puddle of tears by the end of it. Of course they exchanged rings and I loved their exchange. There was laughter and smiles and just pure perfection! It wasn’t long before they were pronounced husband and wife and they kissed the kiss of a century! There were multiple kisses and even this fun side goofy one below. They walked away for a champagne toast with nothing but smiles on their face. 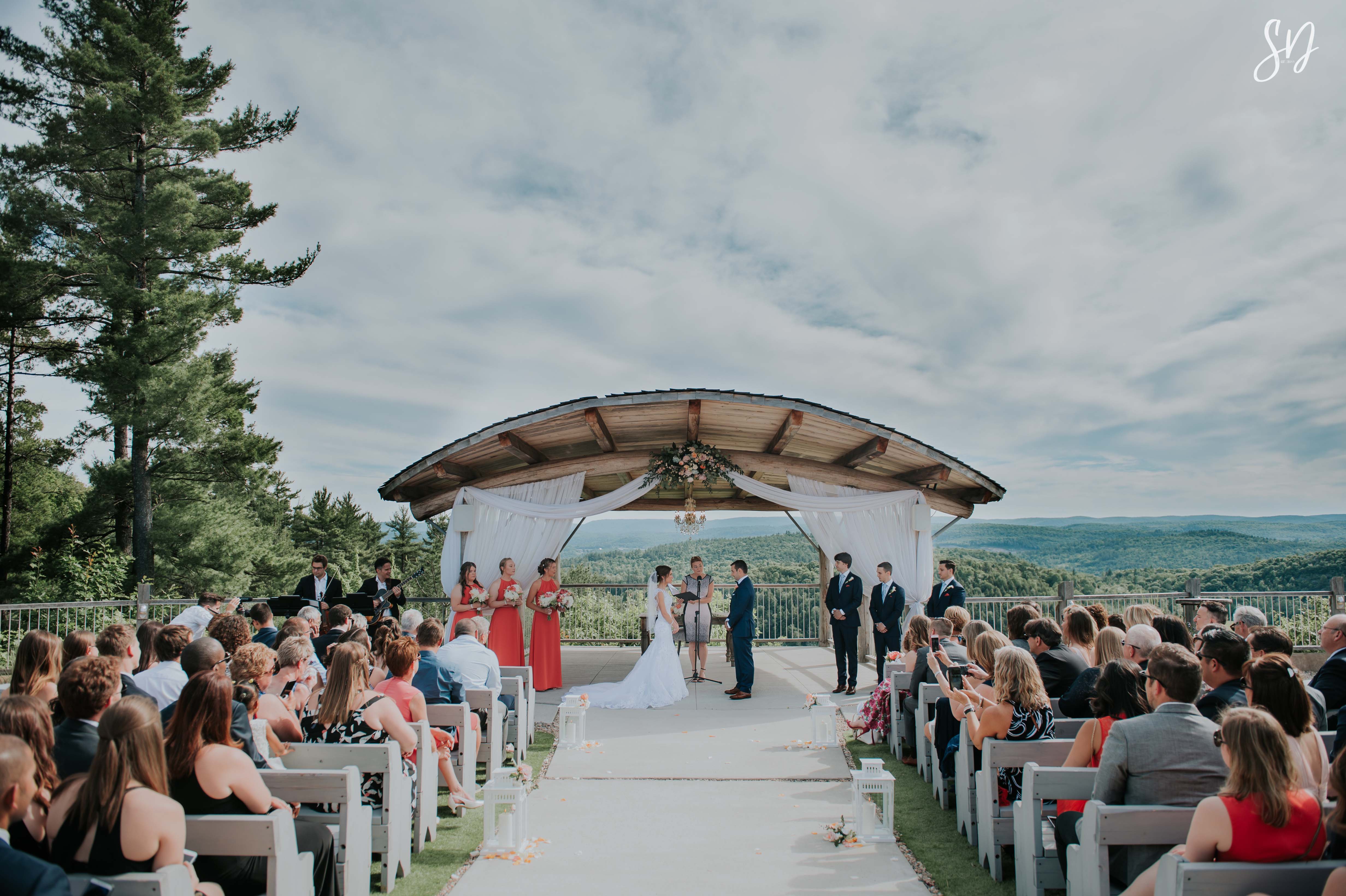 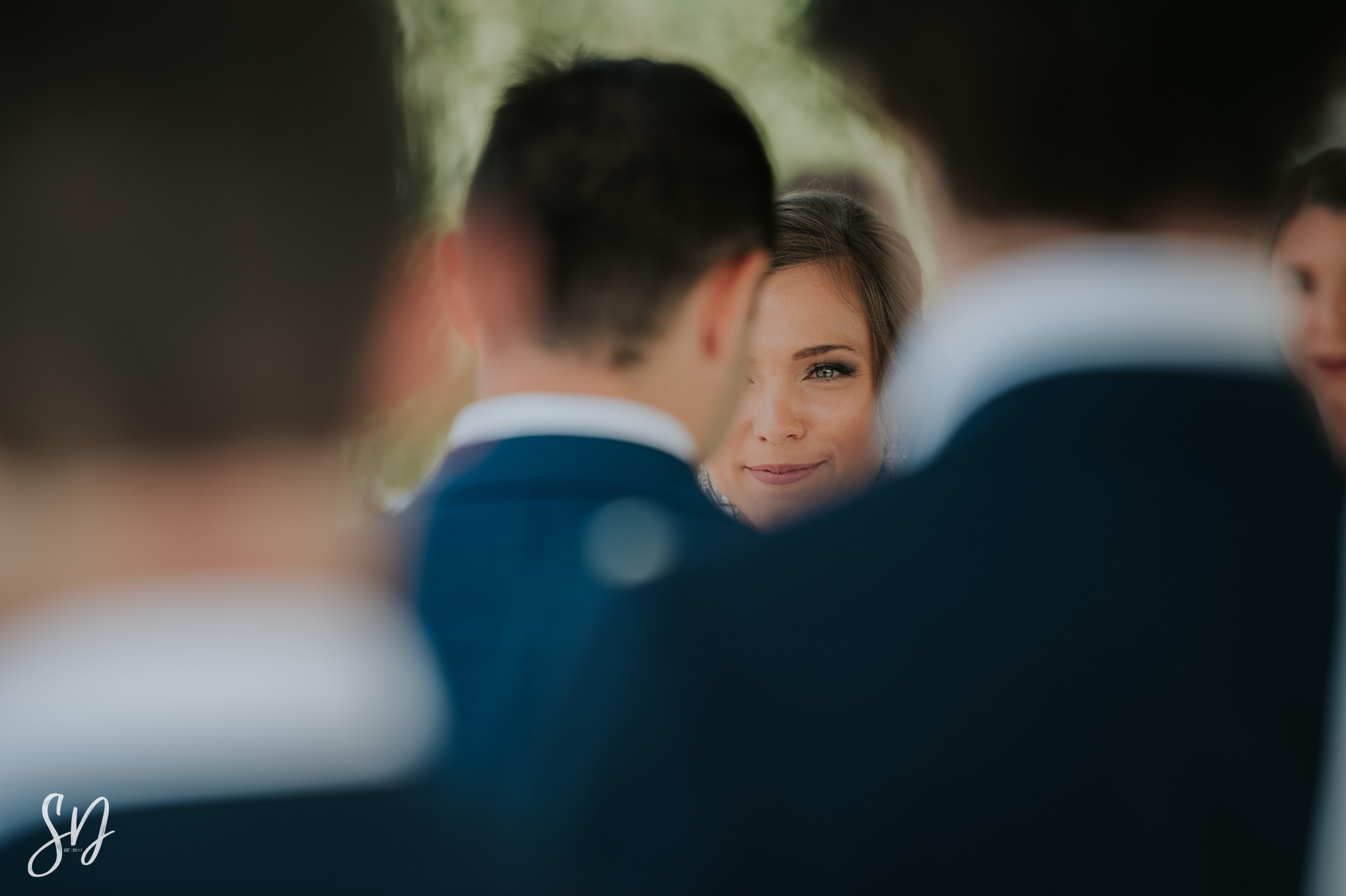 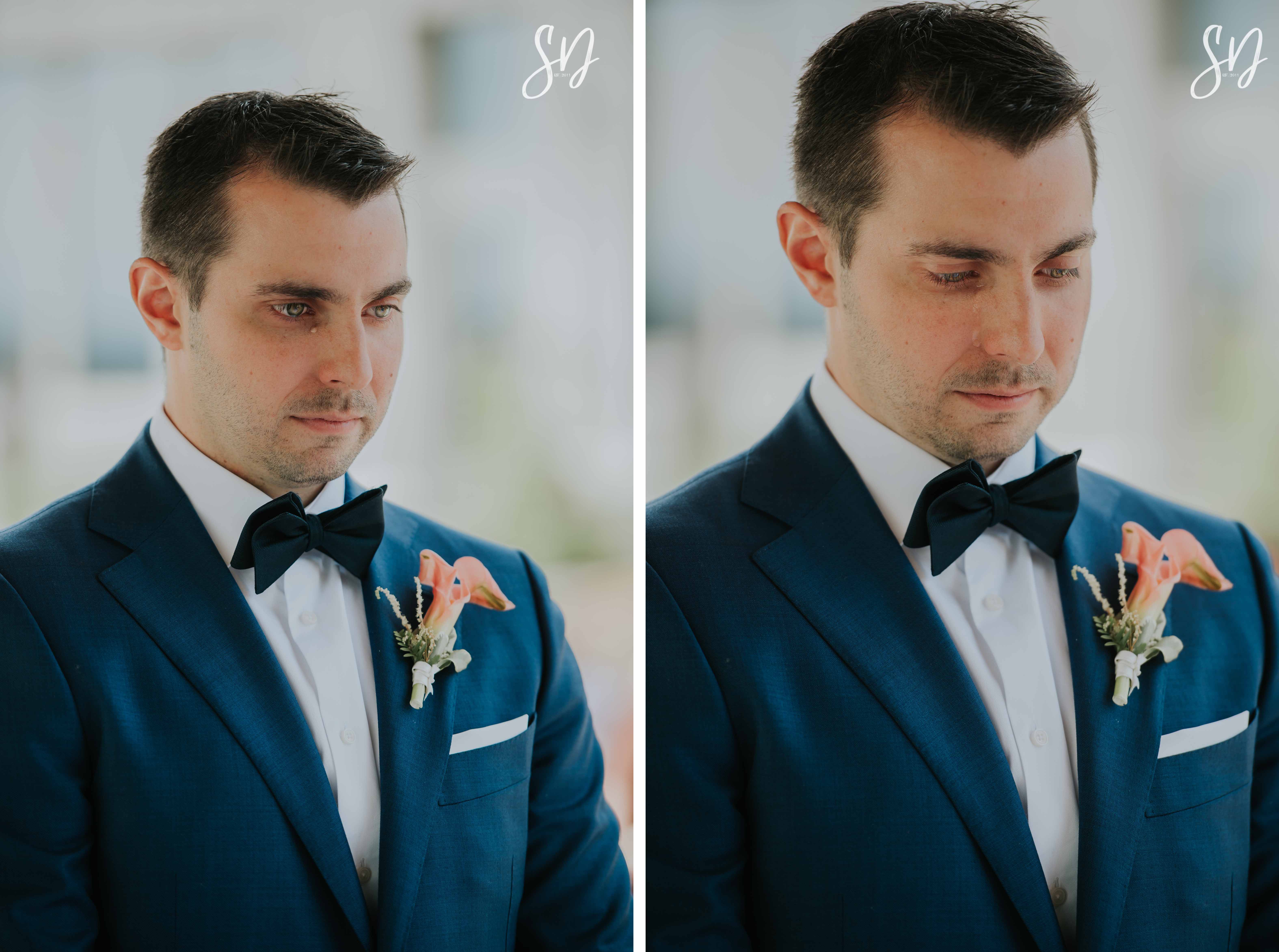 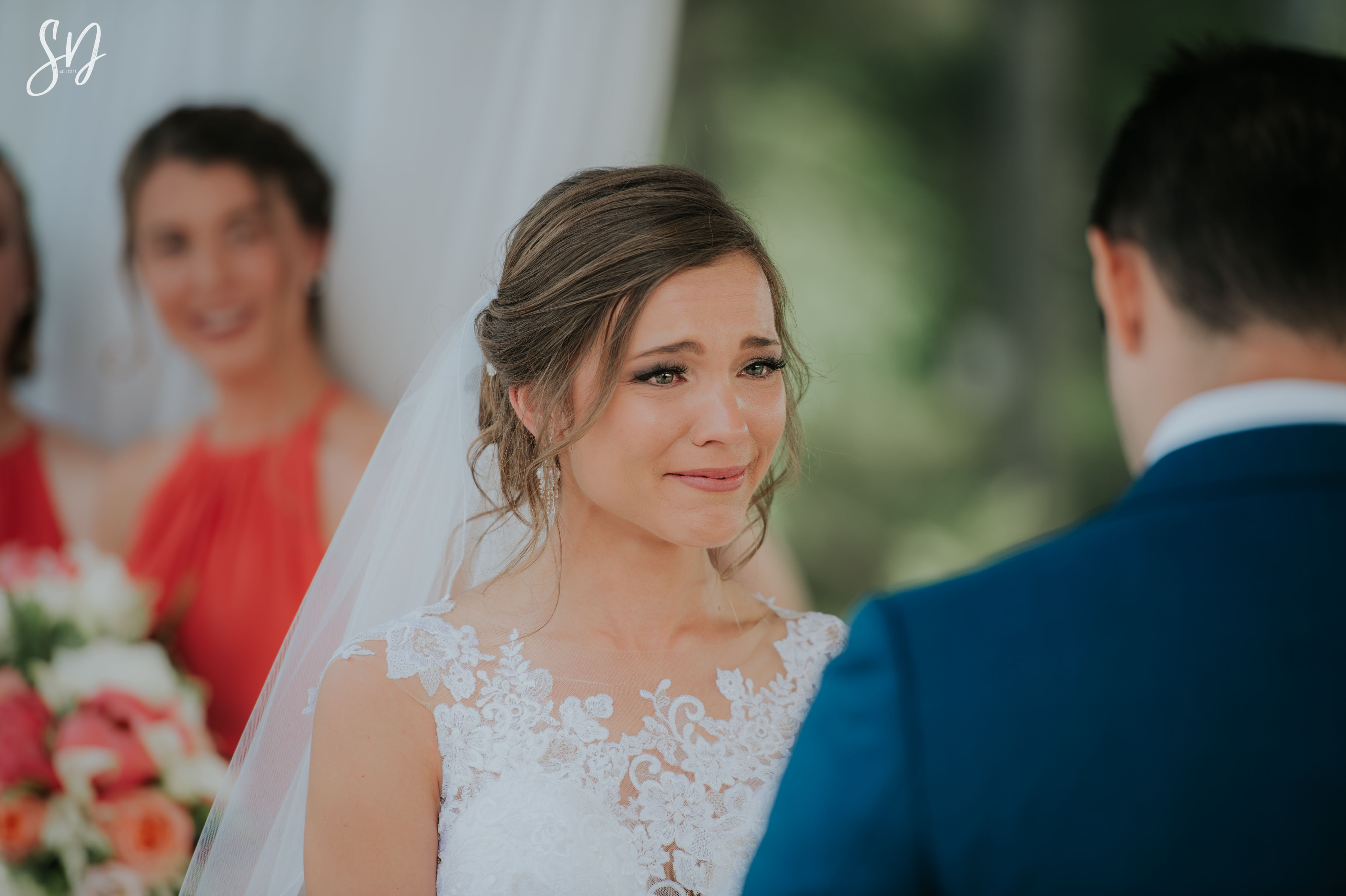 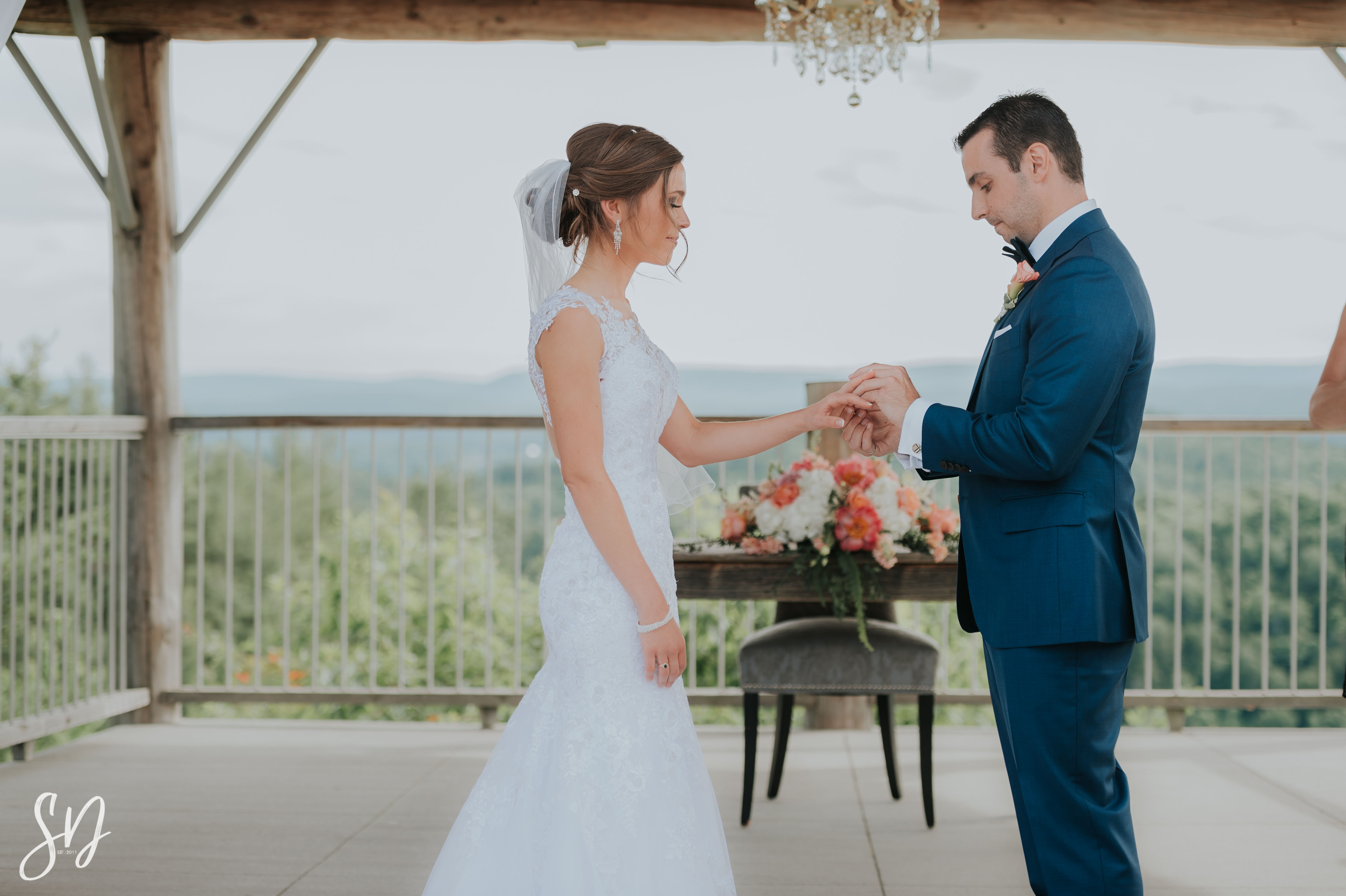 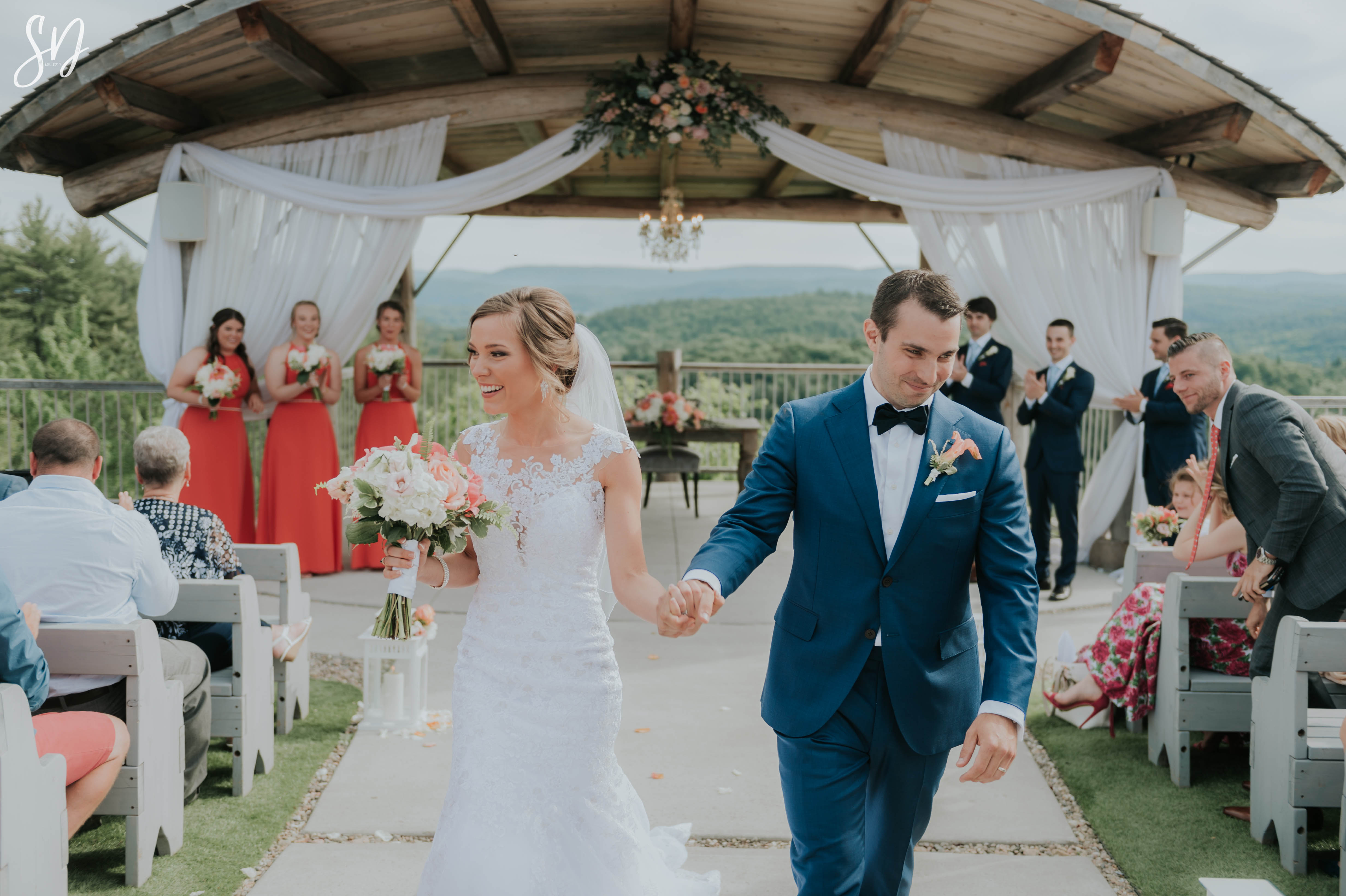 After the family photos we were off to the cliffside with the bridal party to get some photos done before the reception. We got super lucky with the sun deciding to hide behind some clouds giving us pretty perfect light. We walked around, laughed, jumped (a few times might I add) and after sweating up a storm, the crew was done and it was time to focus on our Bride and Groom. After their engagement shoot I have to say I was so excited for this moment. I knew they were gonna shine in front of my lens and I wasn’t wrong. These two didn’t need any direction whatsoever, they were in their bubble and they knew exactly what to do. Here’s where things get interesting, after hanging out on the cliffside we decided to go finish up in the field across from the main building. I lead the way and as I turned the corner lo and behold A SKUNK CAME RUNNING MY WAY! I stalled for maybe a millisecond and my brain finally registered what it was seeing and I let out a yell and turned around to run for it but I was done for before I could even blink. I GOT SKUNKED!!! My legs were soaked in this oily green smelly stuff. I had never seen this before to be honest so seeing this neon green stuff on my legs surprised me so much. Luckily no one else got hit. We ran inside and I grabbed wet wipes and rubbed absolutely everything I could see off. Jasmine, the coordinator was kind enough to go over to Jess’s home (the owner of Le Belvédère) and went to get a special skunk off liquid for fabric and animals. We decided to keep shooting, I mean, I wasn’t going to let this stop me. As we were finishing up I stepped on a rock going downhill and twisted my ankle. But again, I pushed through, I wasn’t about to let anything stop me from shooting. After we decided we were done I ran to my car to change my dress and shoes, because I am a genius and always bring extra clothes with me while shooting a wedding. Sadly, the smell although not as strong, remained and I apologized to everyone I met along the remainder of the evening. 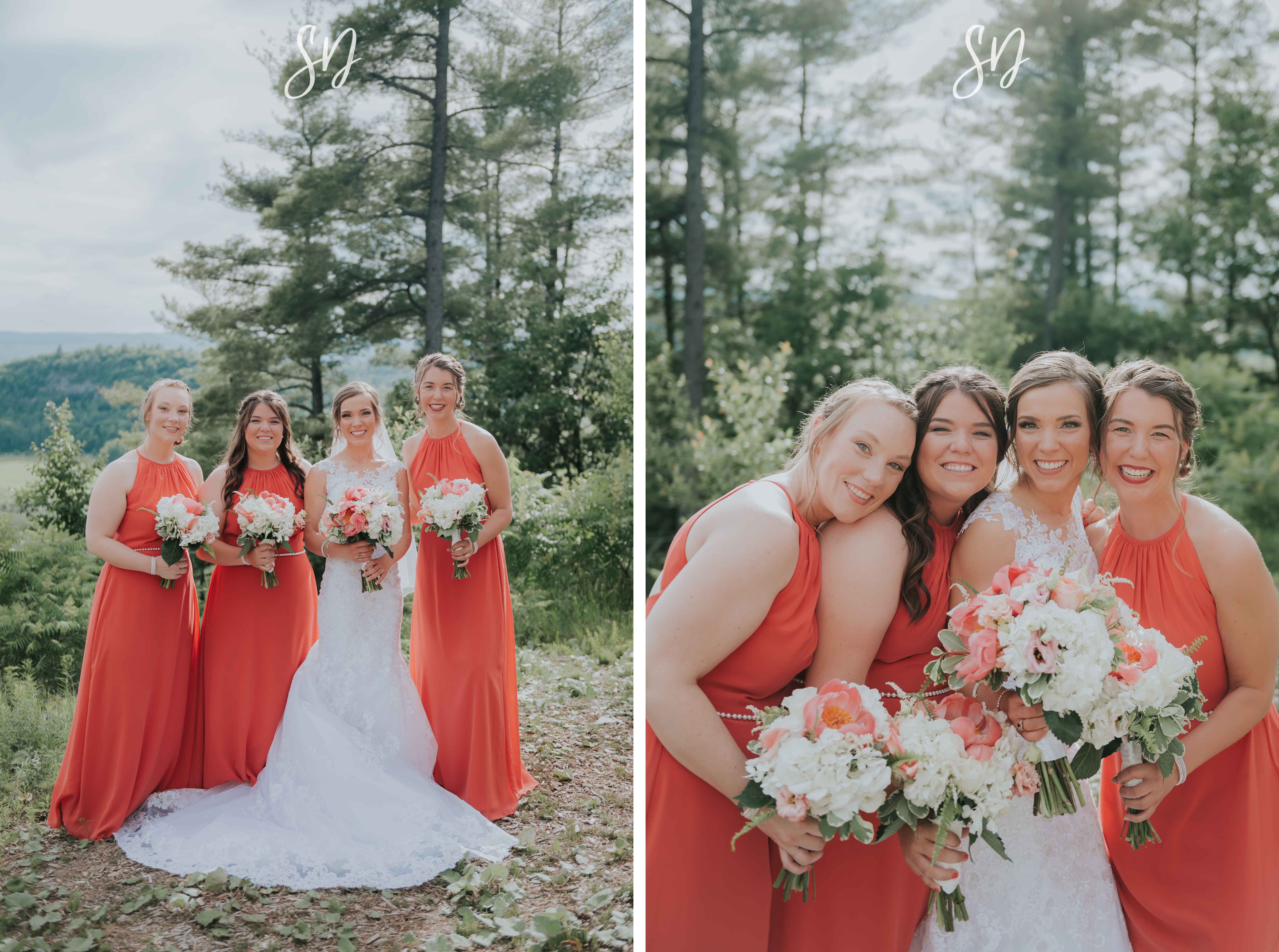 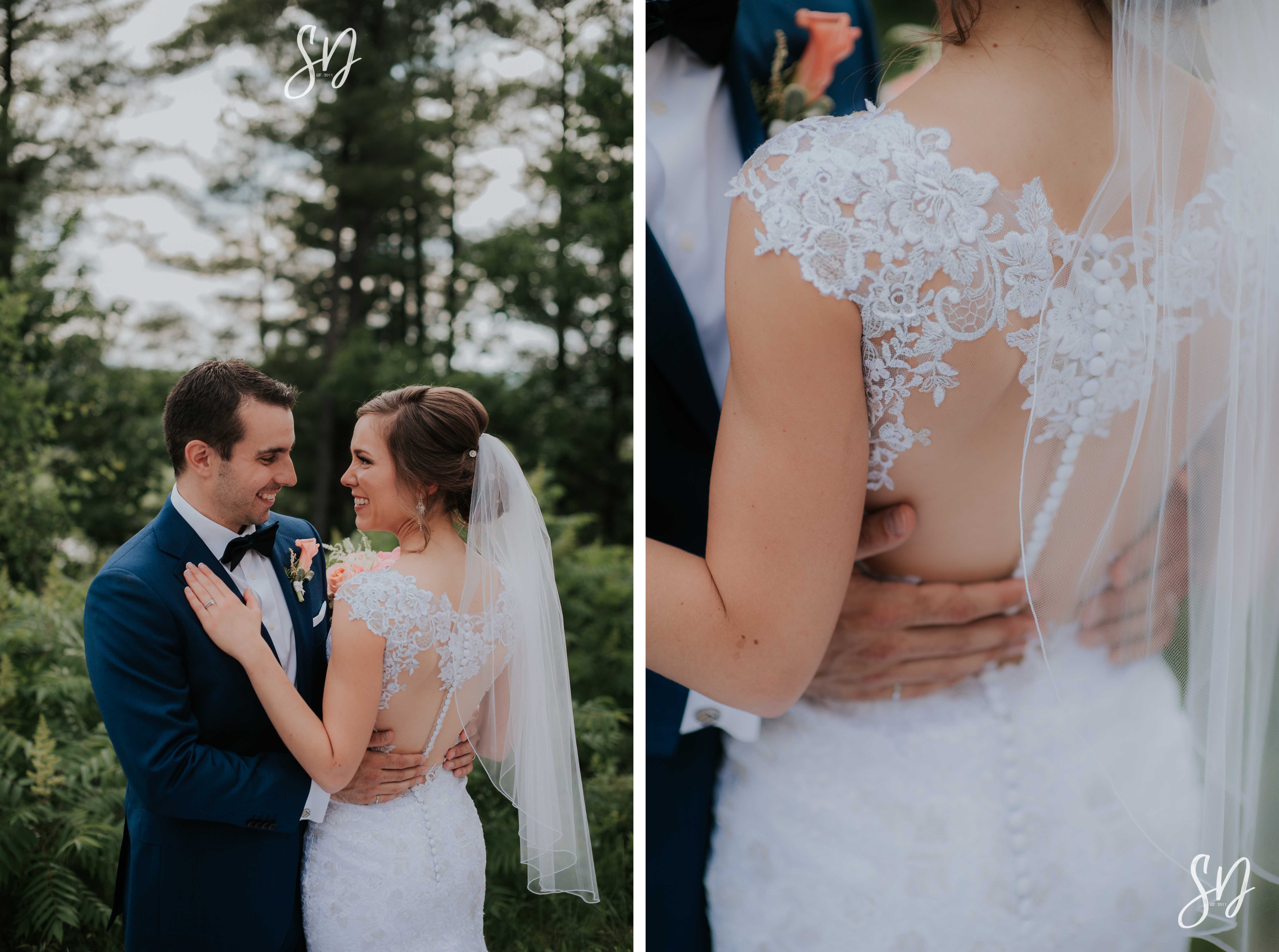 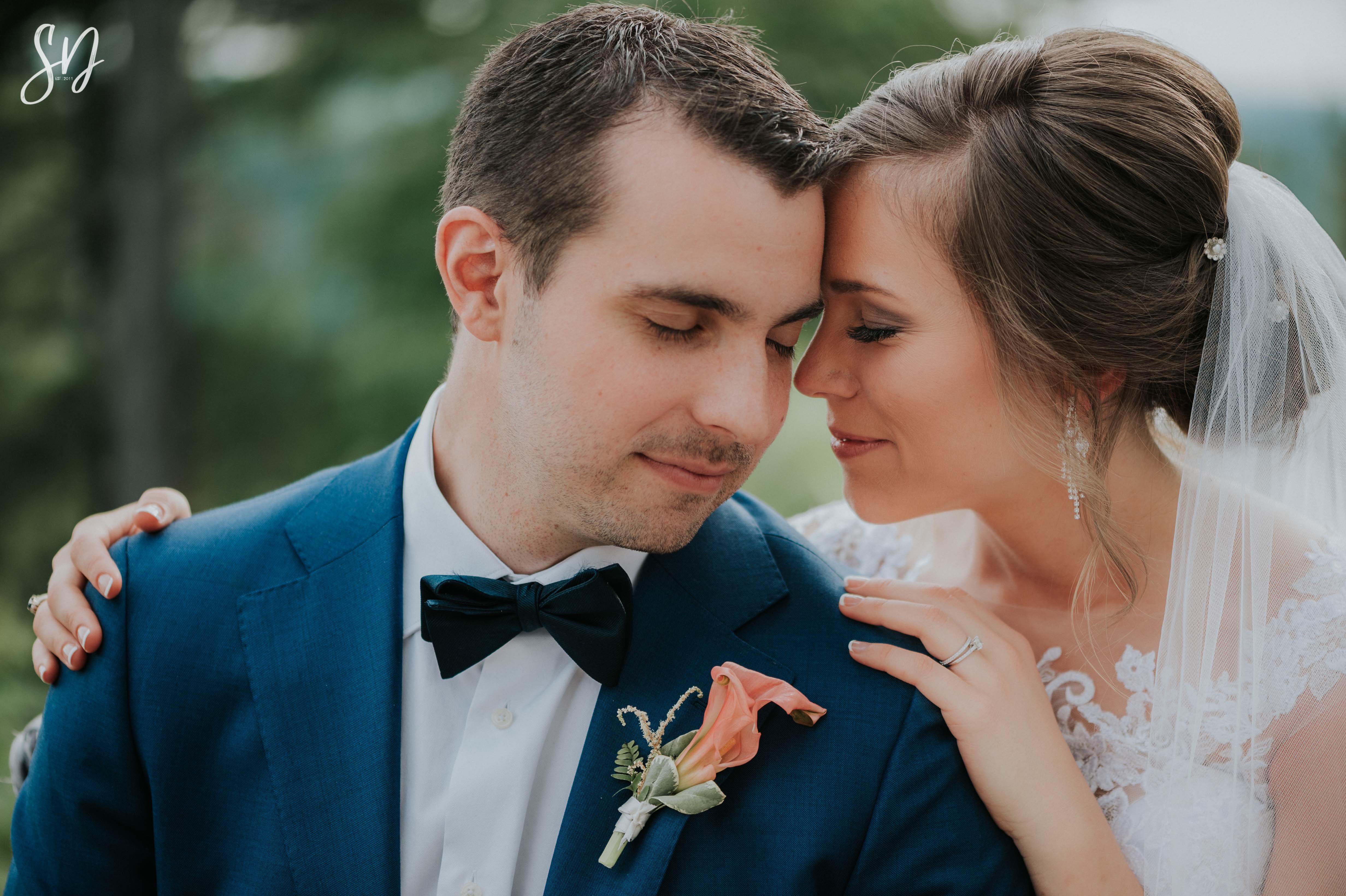 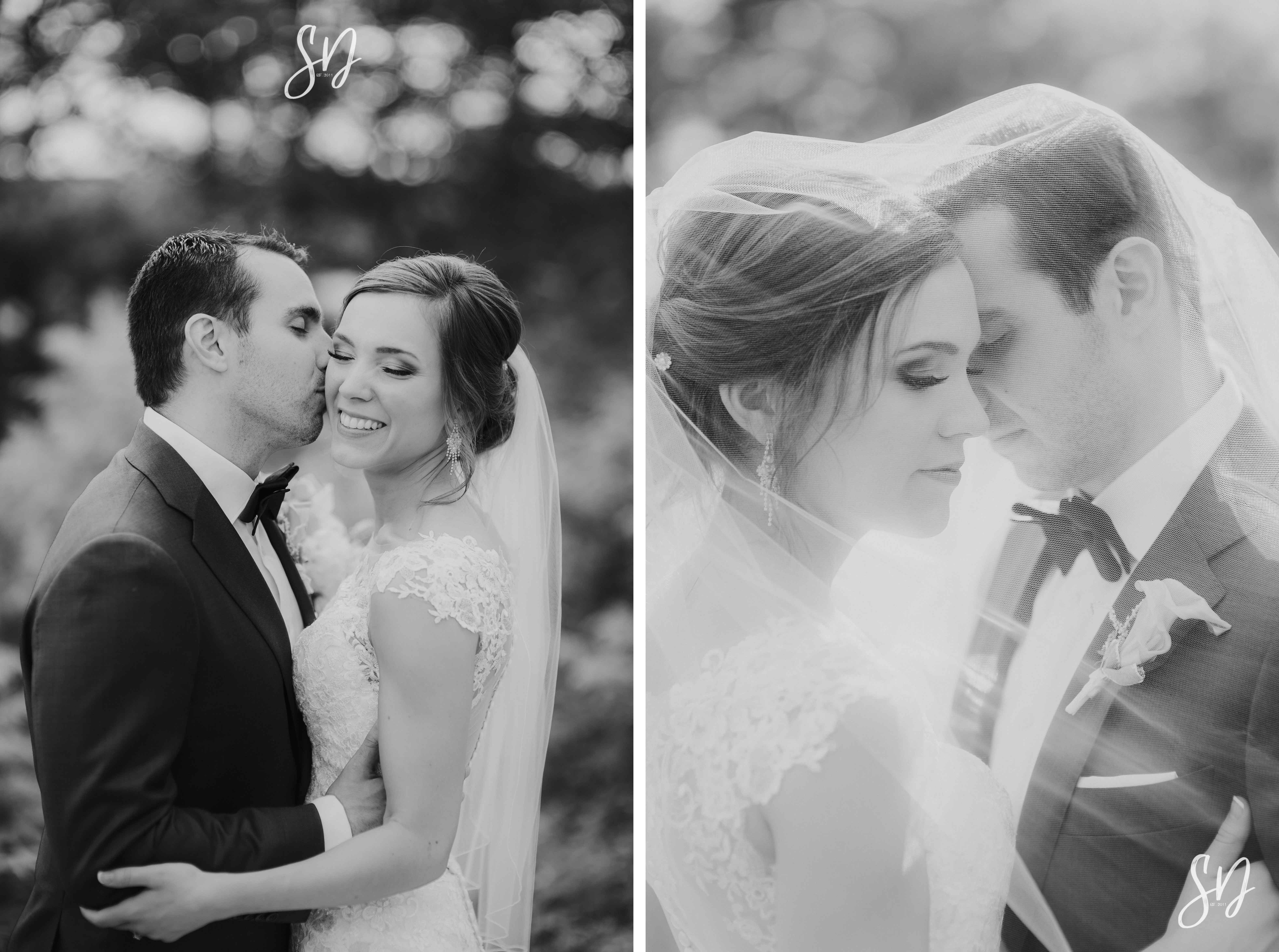 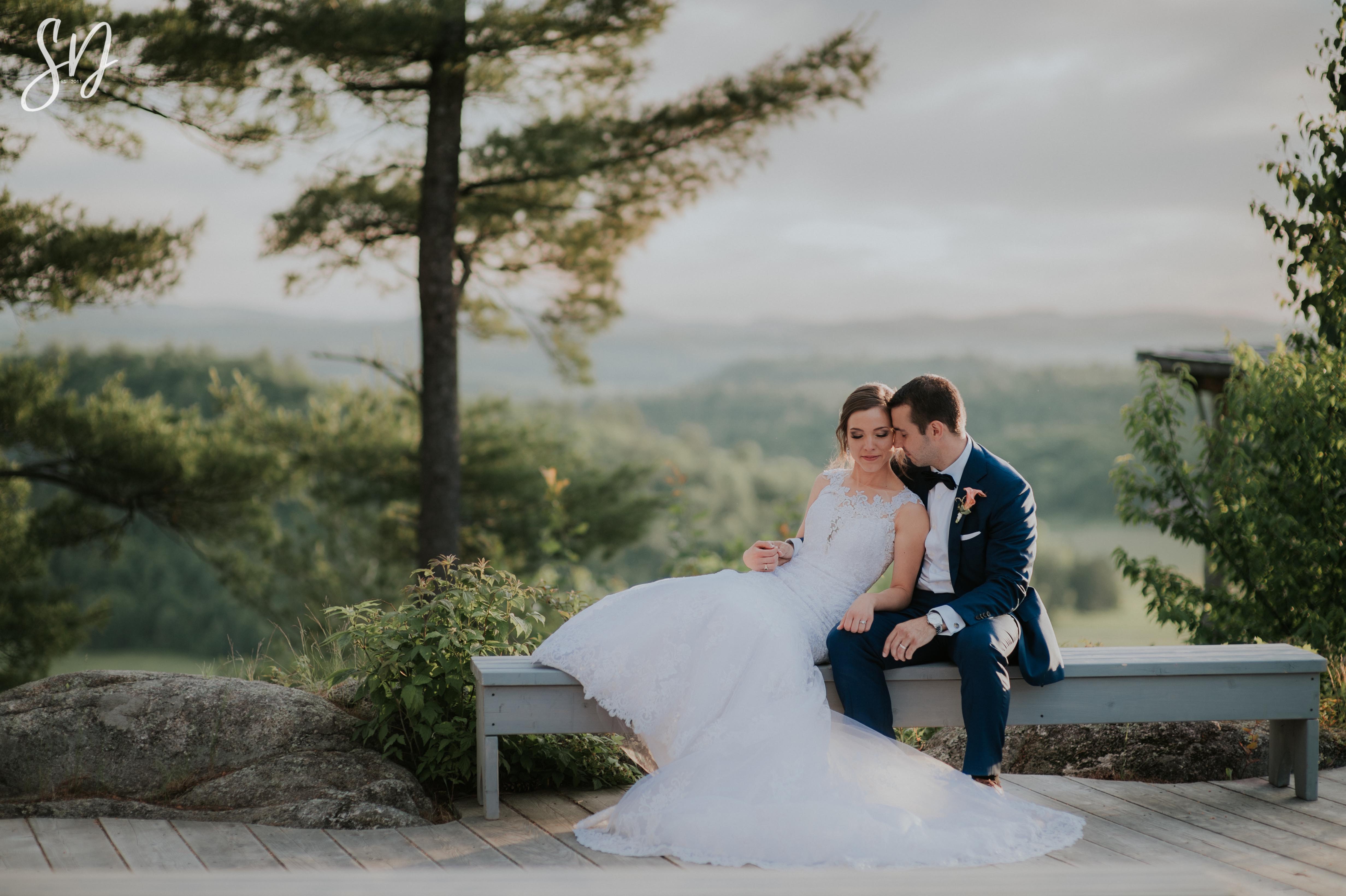 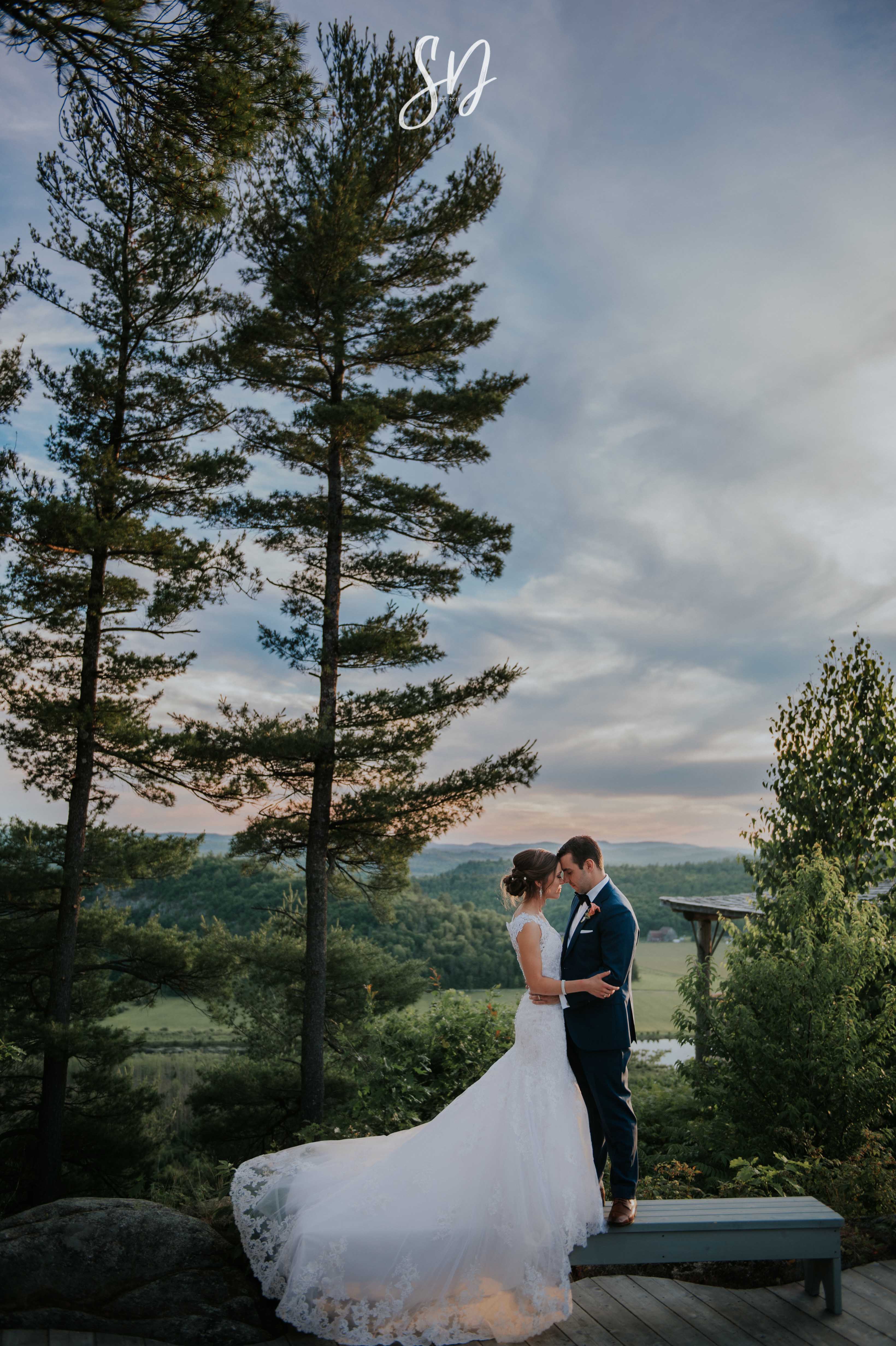 I sat at my little table and worked on a few same day sneak peeks while the wedding party got ready for their grand entrance. I also broke a light stand while prepping for their grand entrance. It was really one of those days. The entrance was a grand one indeed! everyone walked in dancing and smiling but when Janie & Justin got on the floor the guests started cheering and the wedding party surrounded them and they all danced together. The guests were invited onto the dance floor for a quick dance to ”Ont va s’aimer, ont va danser, oui c’est la vieeeeeee” and they had a great time. The bride and groom quickly thanked their guests for being there and did a special shout out to their friends that set them up on that blind date in the first place. There were a few speeches, planned and unplanned by the wedding party that told stories of our two beautiful humans and Janie’s parents both got up to say a few words. It wasn’t until papa spoke though that the tears came coming from Janie’s eyes. What an emotional day, am I right?

The guests lined up with sparklers in hand to guide the bride and groom out to their first dance as husband and wife. They held each other close and smiled through the entire thing. I don’t think they took their eyes off each other for even a single moment, it was lovely. It was followed up by the father daughter dance to ”I Saw her First”. I’ve heard this song a million times and it seriously never gets old. It’s so so beautiful to watch little girls dance with their daddies to this song. Again, Janie and her dad had the guests tearing up (including myself, again). We then walked inside for the mother son dance which was then turned into an everyone dance. And then the party got started! The DJ played some Bruno mars quickly followed by some old school jams that really got everyone going. The night ended on a perfect note and I couldn’t have asked for a better day, even though I got skunked, twisted my ankle and broke a light stand. It was so totally worth it. Merci Janie et Justin de m’avoir invité à participé dans cette aussi importante journée. Je vous tiendrait à coeur pour le restant de mes jours xo ♥ 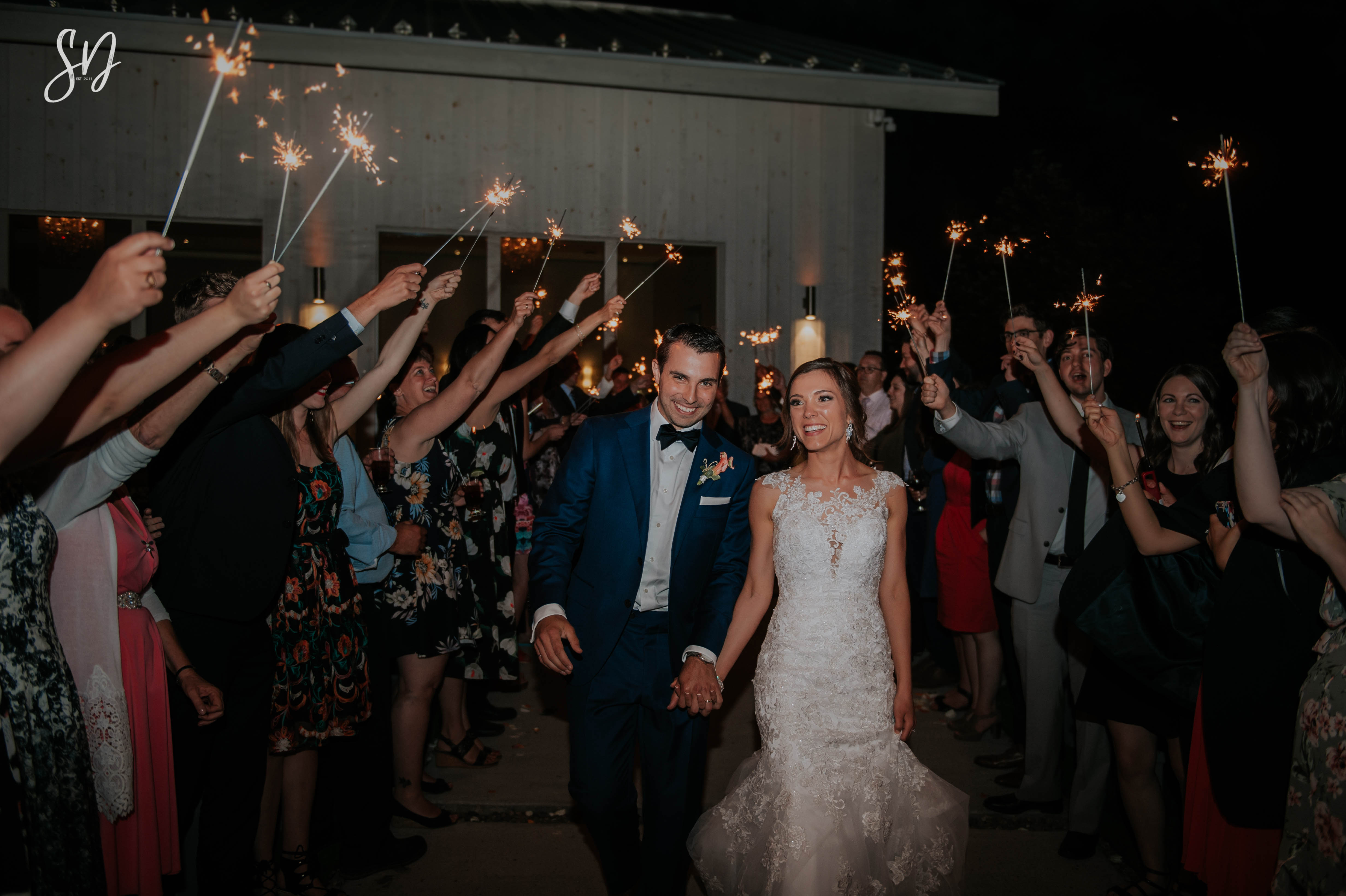 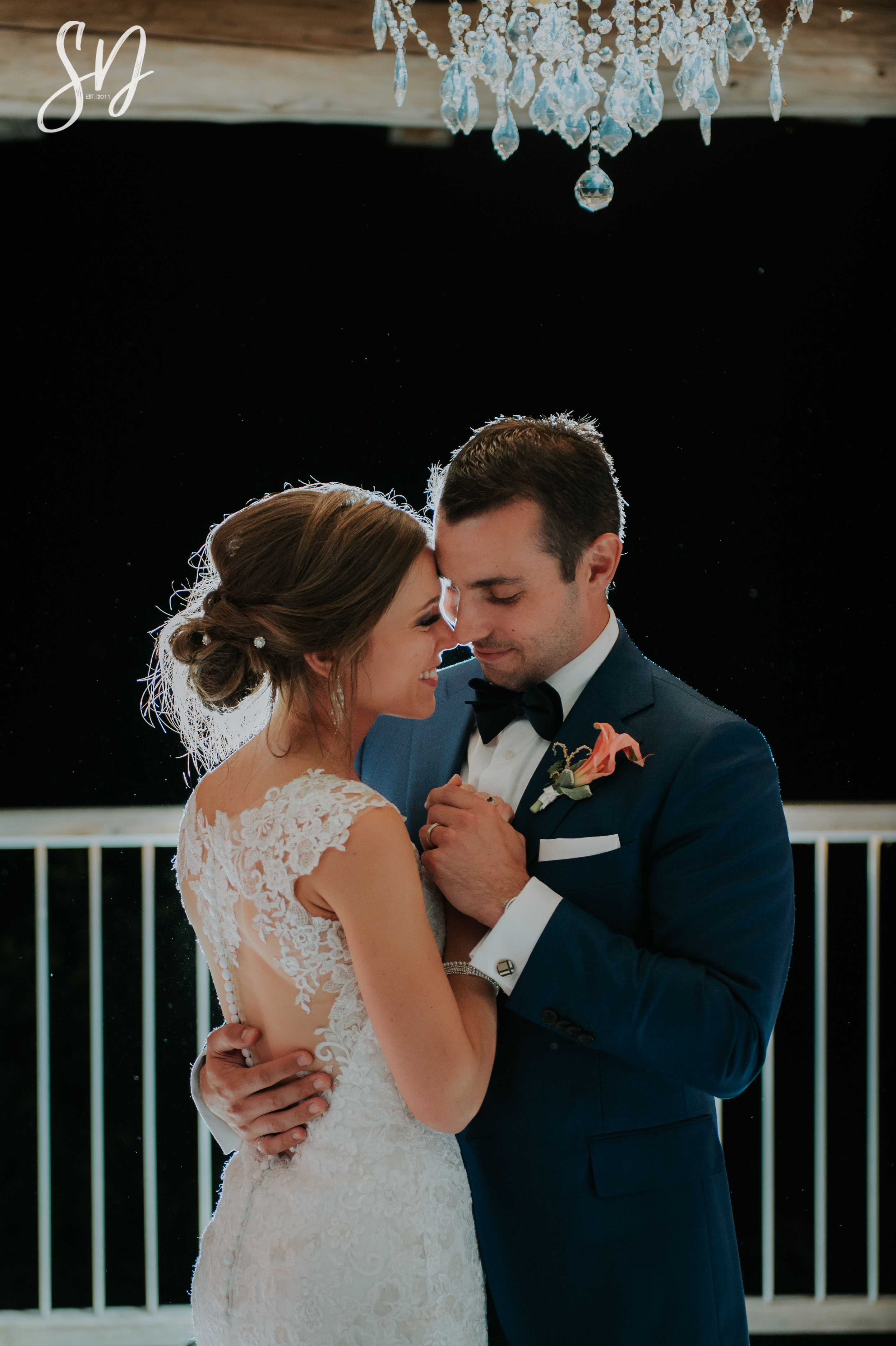 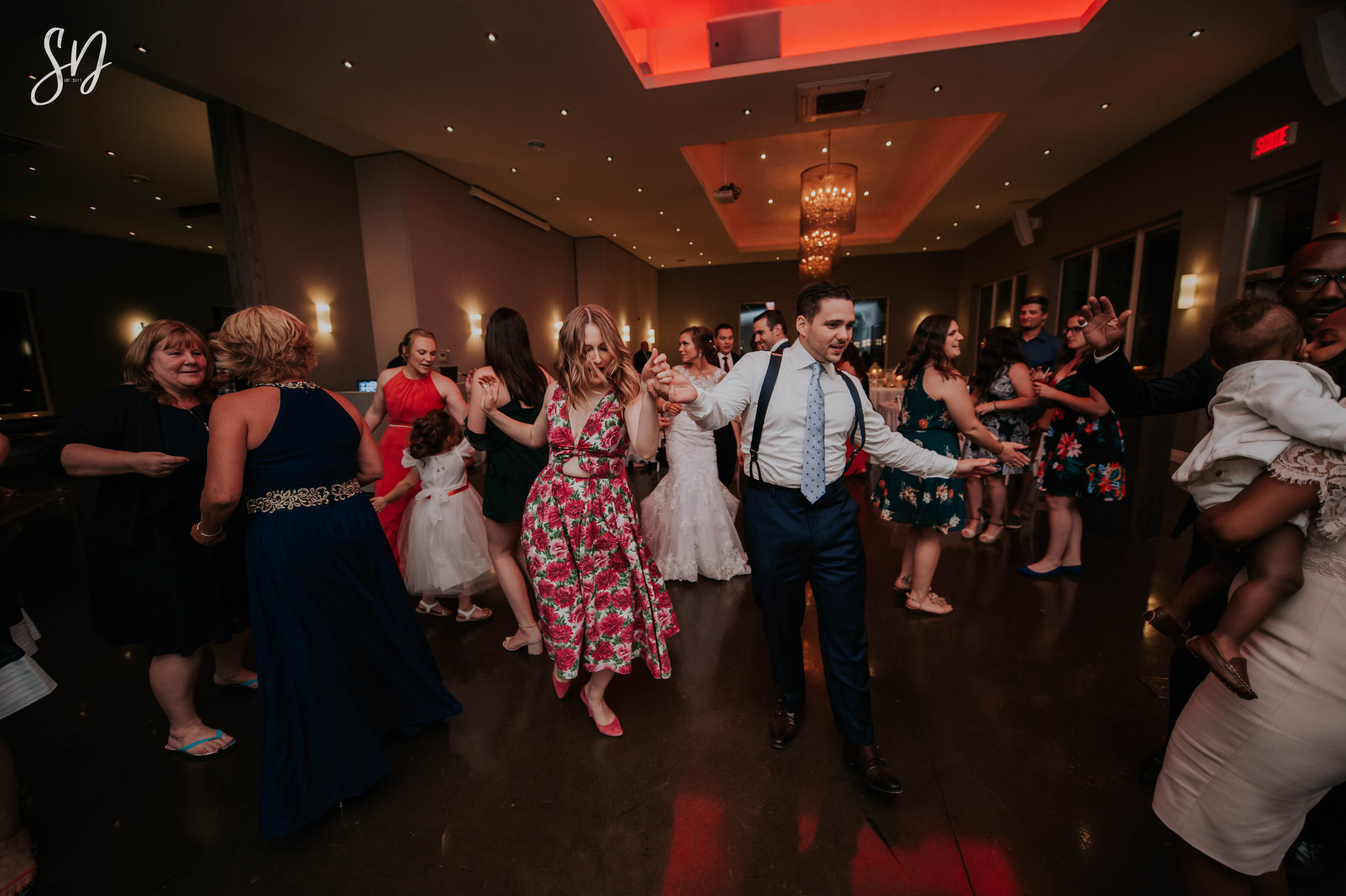