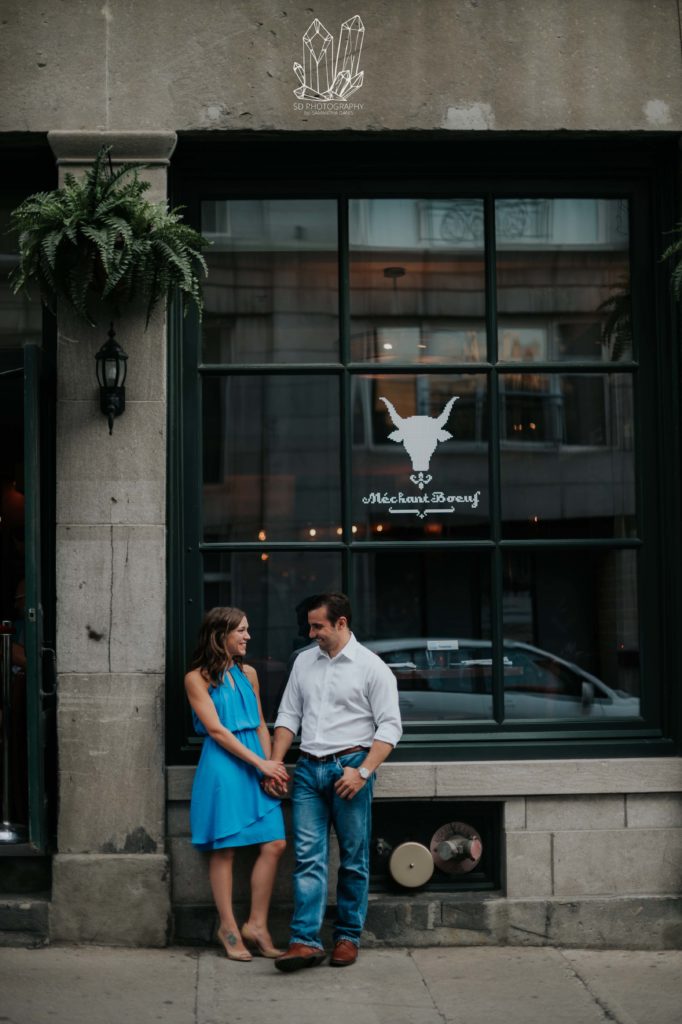 What a magical day! When I met Janie and Justin, they were torn on where to do their engagement shoot. He wanted Pink lake out in Gatineau Park were they got engaged, but Janie wasn’t quite set on the idea. She had mentioned going to Montréal and I said sure, why not. Leading up until the day of the shoot, we hadn’t really discussed the idea any more than that but lo and behold, I found myself waiting at my door for Janie to pick me up to road trip to Montréal on Sunday afternoon! We talked the whole way there about their new house, the disasters that came along with it, work, wedding planning, babies, everything you could think of. Then we hit the dreaded MTL traffic, on a Sunday no less. So we call Justin to let him know we’d be a little late since he was already there due to having visited some family, but he didn’t mind because he went to Les 3 Brasseurs for a pint of beer. Once we finally managed to find parking, Justin met with us, did a quick change and off we were to explore the streets of Montréal. Now I’ve been to MTL for concerts quite a few times, for ringette in Kirkwood and once in the Old Port last summer for a day. But there was a lot of construction and people so we didn’t really get to explore the are therefor I wasn’t very familiar with my surroundings. So Justin kind of acted as a guide since his family in from the area. We walked around just chatting until I would find some spots and funny story, the first restaurant we walk by is ”Méchant Boeuf” where these two lovebirds met! It was destiny that we come back her for the session. So after a couple photos off we were again and omg guys, this alleyway I found with Edison Lights and planters was just PERFECT! I couldn’t believe these types of things just existed around here. I made my way up a metal escape stairwell and the couple happily cuddled and even danced for me! There was so much dancing, it was just so natural to them! We continued our walk and made our way to the Courthouse where there was these gorgeous columns and big golden door. Wanting to take advantage of the architecture we stopped and did a few shots. I was so excited about the door that I say we should take pictures with it, but then Justin made this super weird face and looked at me like ”are you serious?”, I didn’t understand why he was so opposed to this beautiful door…Until I got close. NAKED MEN! There were some naked men carved into the door! Needless to say we said Woops nvm and were on our way. 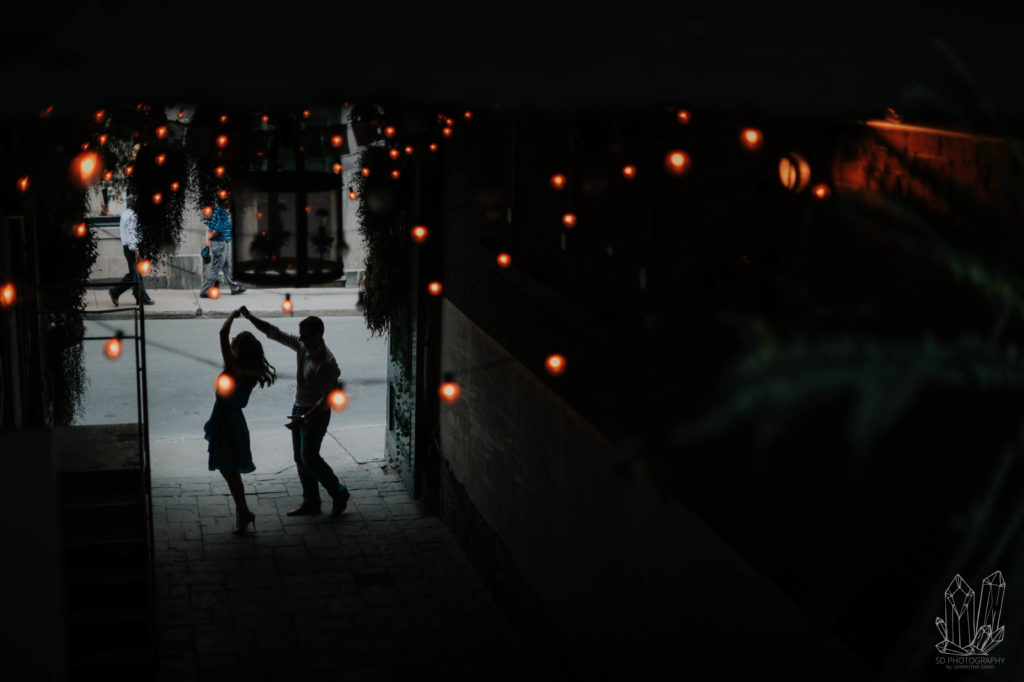 I knew we were getting close to the Main Entrance of the Old Port from my visit the previous year but as we walked closer, I could see this gorgeous setting sun, and omg did I ever get excited! We turned the corner and BOOM! GOLDEN LIGHT GALORE! There was a fountain and people everywhere and I was just jumping of joy. These two went straight for it, jumping up on the fountain ledge, dancing, kissing, walking around it was just pure beauty! I could have stayed there forever but we couldn’t very well be hogs now could we? So we went down to the boardwalk, but not before stopping for some ice cream at an adorable little ice cream shop. Janie really wanted to get to a specific location but with the walk taking more time, the amount of people (there was some kind of festival) and the sun setting rapidly, we x-nayed the idea and walked along the boardwalk in the hopes of finding another spot. And boy did we. We saw boats and docks and decided to head down to one of the empty docks to try and get some shots. On said walk, Janie’s high heel got stuck in one of the holes on the dock!!! Like straight through guys, and it took some pretty strong arms (thanks Justin) to rip it right out and just like that, the shoes were ruin and down to the stud. We didn’t let it damper our session though as we made our way to a dock that was parallel to the city skyline. But I needed more room, so I got them to go on this Itty Bitty little dock that was vertical to this one, and boy were they nervous about it. But they rocked and got the most Montreal photo one could get from a pier! 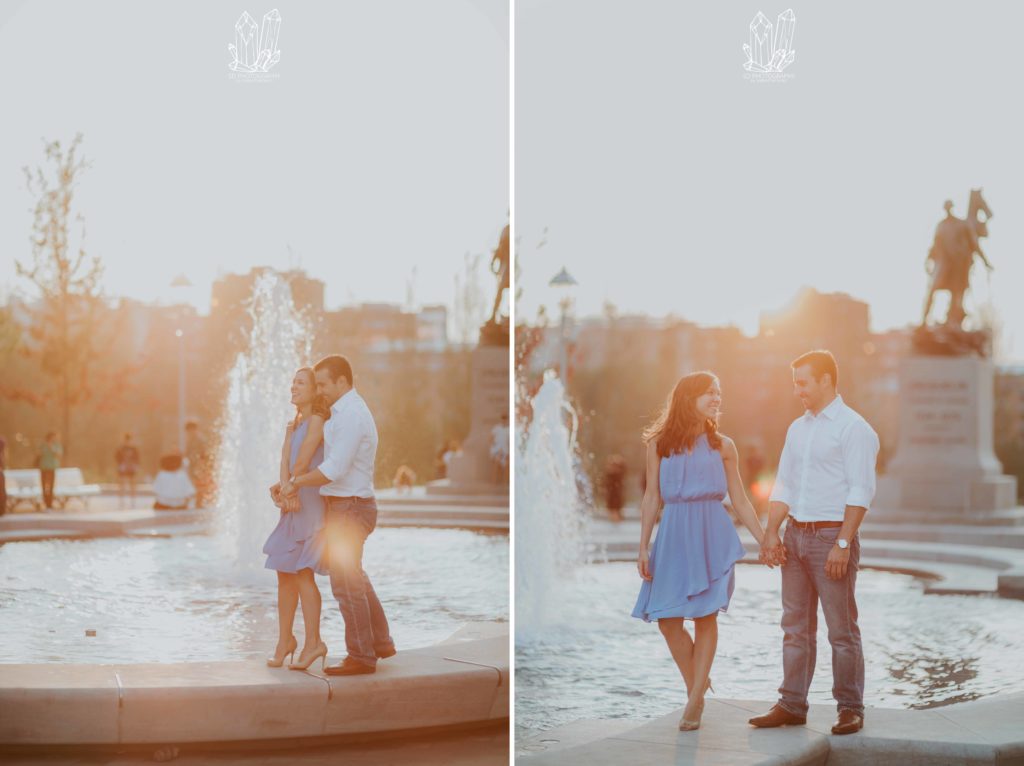 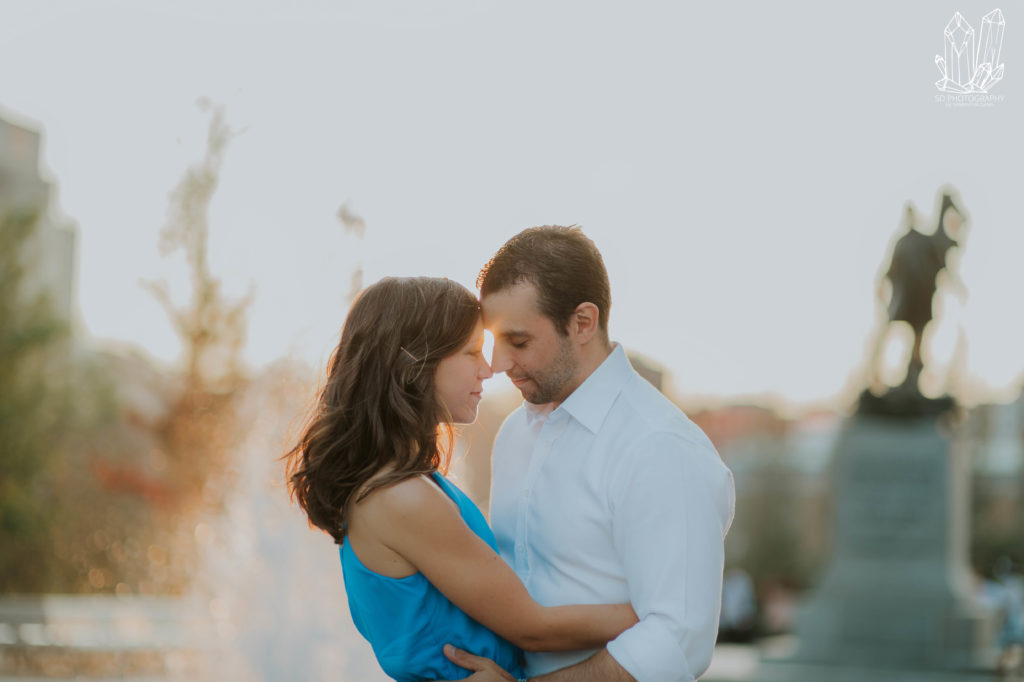 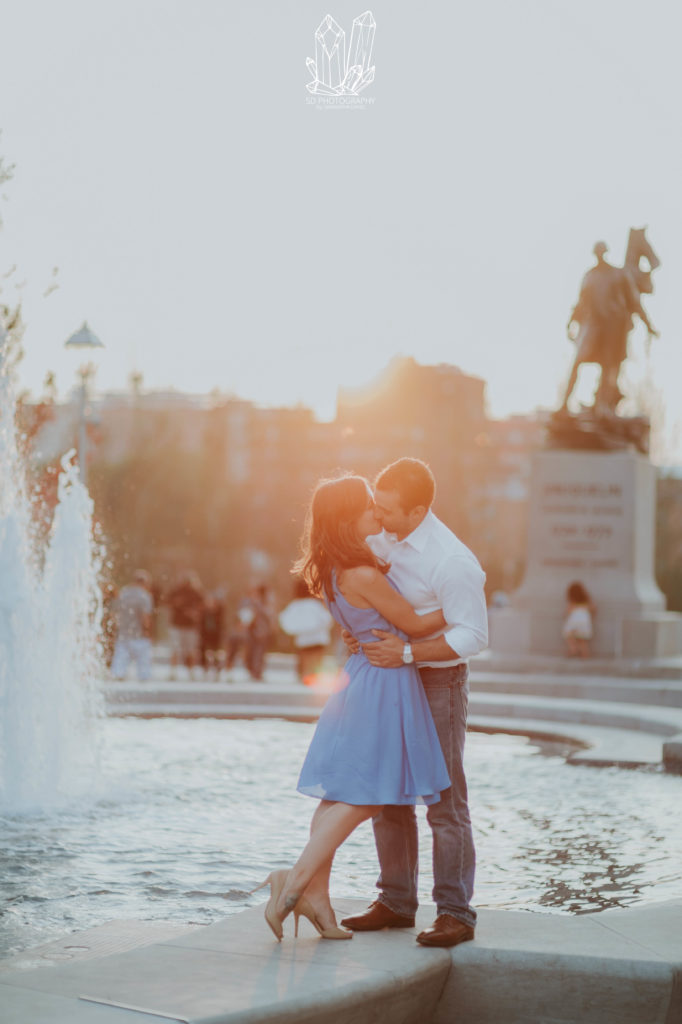 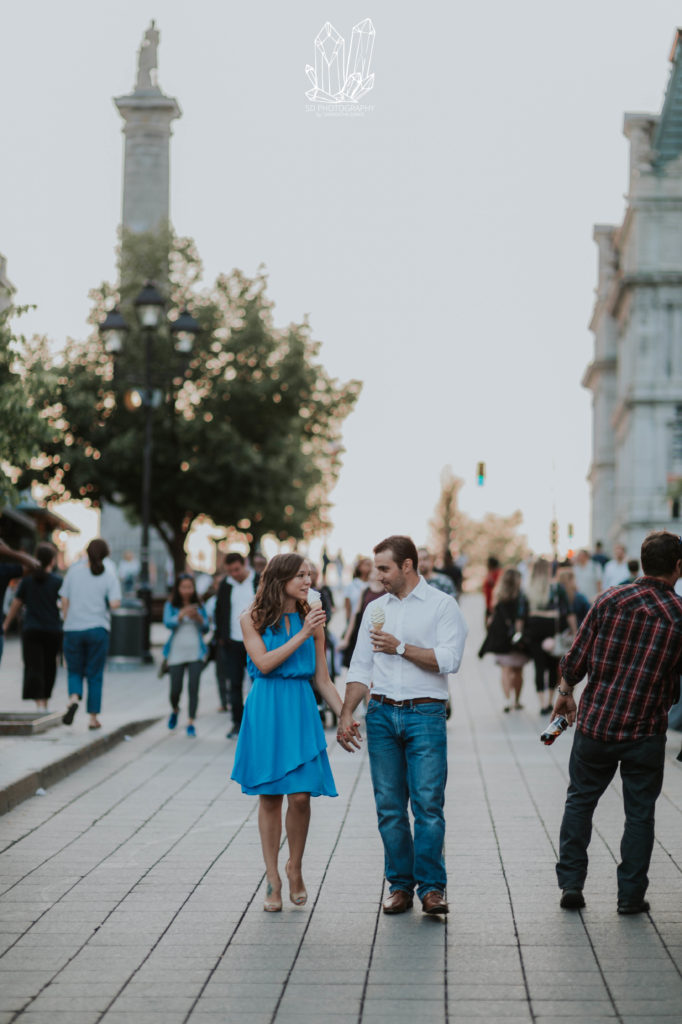 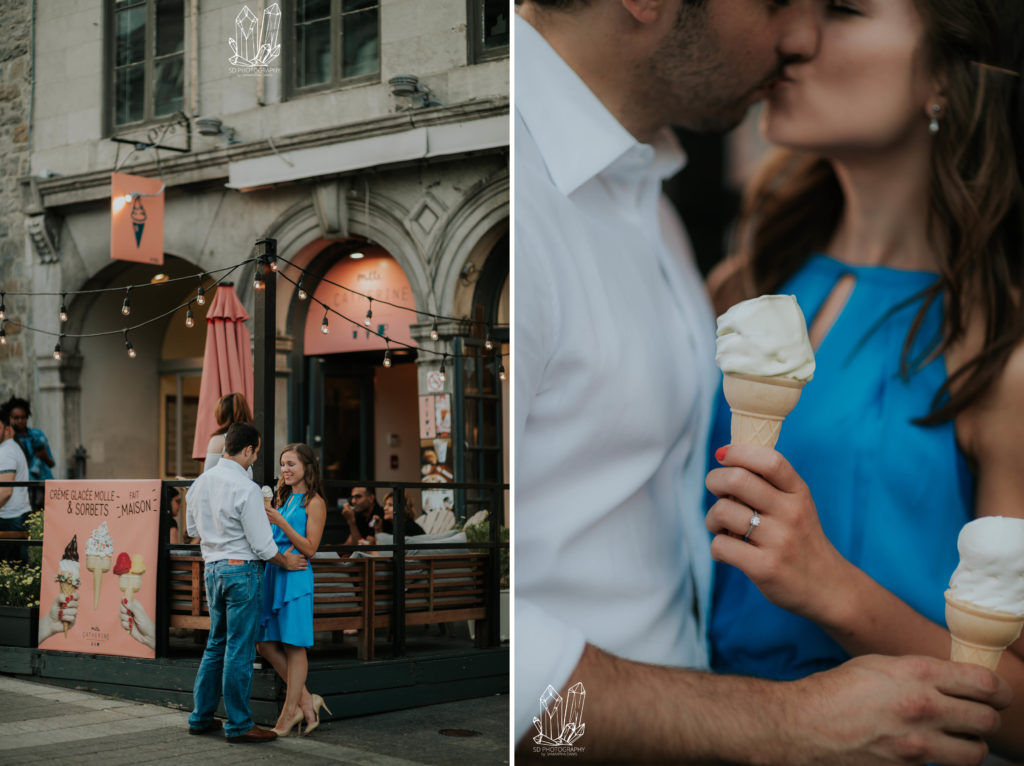 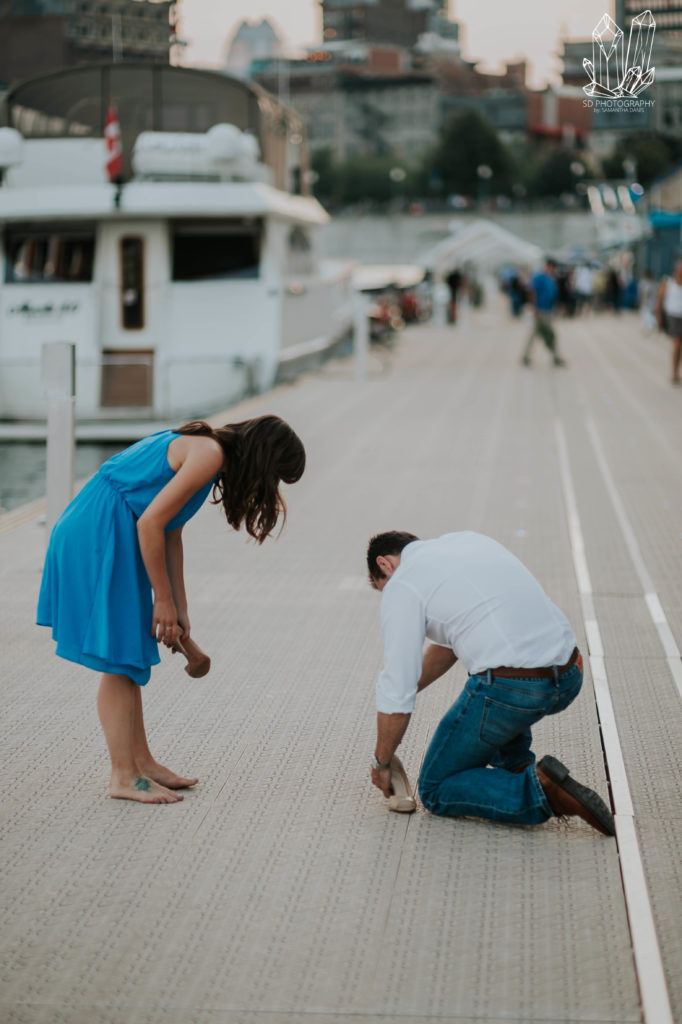 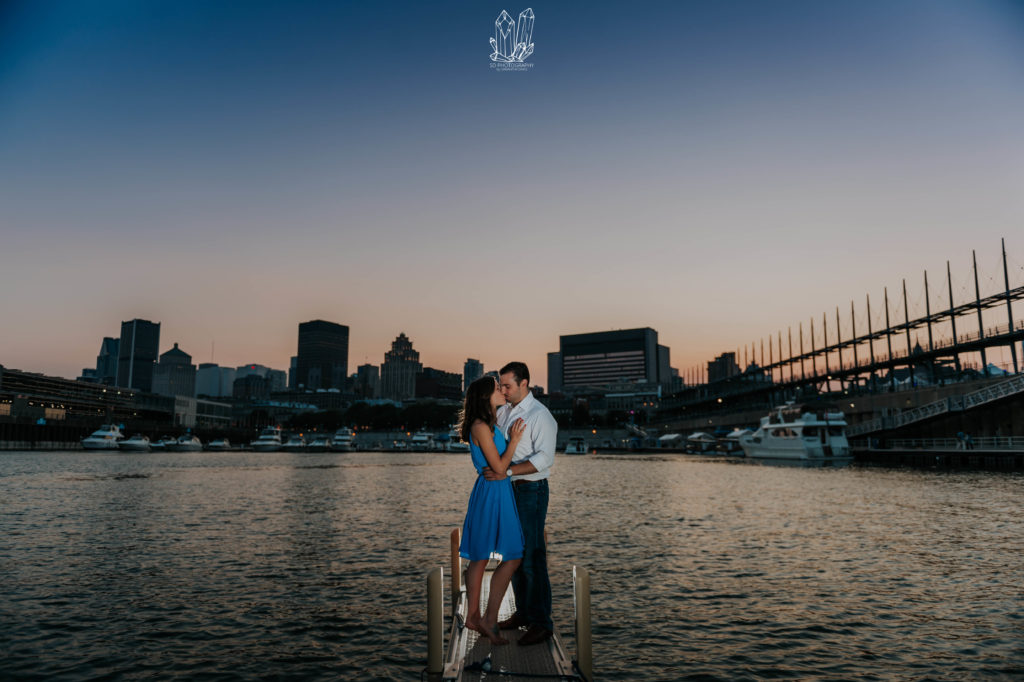 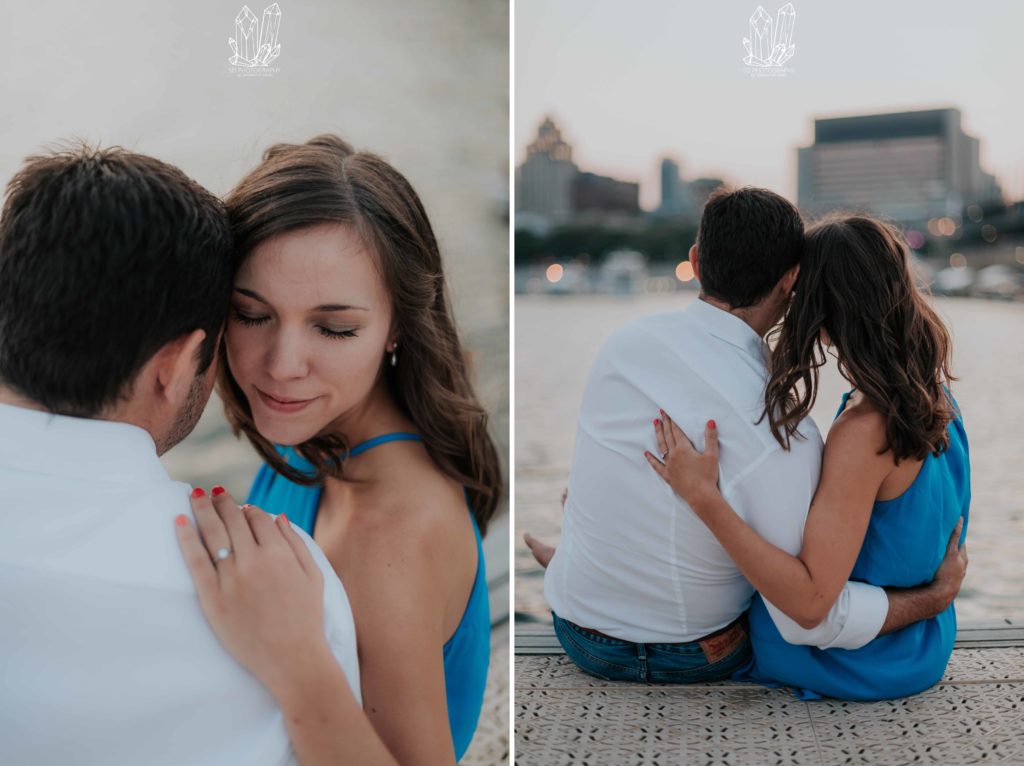 We ended our night back at the same street our car was parked and I had told them we were done, but when I saw the lights lining the street I just had to get another shot in, and thus became another beautiful Montréal photo! I honestly can say that I had the best time on this session! Janie et Justin, vous êtes de véritables coeur ♥ Merci de m’avoir fait ce petit cadeau dans un monde de rêve. J’ai trop hâte à votre mariage xox 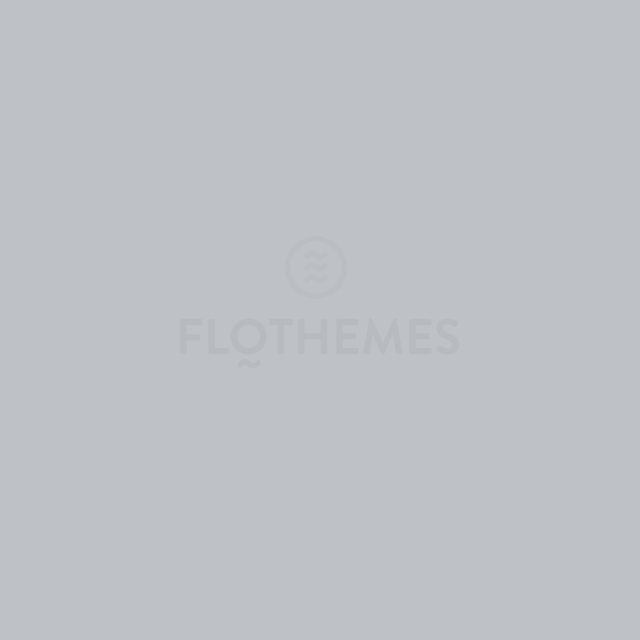