It was another short wedding for me this past Friday but this one was close to home in more ways than one. Not only was the ceremony held in the Forest not far from Rockland, but I know both the bride and groom personally. Chantal and I have known each other since elementary school and I’ve known Max since 9th grade. Max and I were really good friends for 9th and 10th grade actually. So much so that our group of friends would have lunch almost every day at his place since he lived down the road from our school. I would make Kraft dinner and we would watch movies or do stunts in the backyard, you know the usual teenage stuff. I would even go over and hang out with his parents and we would play cranium and just have so much fun! Not to mention, Chantal is absolutely stunning and Max is freaking adorable so I knew it was going to be a good day. High school sweethearts make for the cutest weddings, and it’s even sweeter when you know them personally ;).

When we initially met up they told me they were doing things small and intimate. They would be having a ceremony in the Forêt Larose with their closest family and friends and then be going out to dinner with those same guests. It was small, on a Friday and I would be photographing the ceremony and portraits, it was perfect. I was a little worried about the location at first because if the weather was less than favourable we had no backup location for photos at all. I mean we were in the middle of the woods in Cheney after all. But the day came and it was absolutely stunning out! Better yet, it was only warm out, not blistering hot or humid like the weather we’d had the entire two previous weeks. I drove out to Cheney totally excited to see what awaited me!

I arrived to the Pavillon Henri-Latreille in the forest to find Max, his groomsmen and a few guests organizing things. His father walked up to me with his arms wide open; ”J’avais tellement hâte de te voir, ça fait tellement longtemps!” He shouted as he took me in for a hug. His parents truly are the sweetest people, they remembered the weird little girl that called them mom and dad for two years haha! The forest was a stunning backdrop for this wedding. There were three rows of white folding chairs set up for their 17 guests, a beautiful antique table that belongs to Chantal’s Grand-Mother and of course a beautiful floral piece that they set up to block the sign above the pavilion entrance. I could see dust coming as I looked up the gravel road and knew that was our cue. Chantal was arriving in her Horse Drawn Carriage and it was time for everyone to be seated. 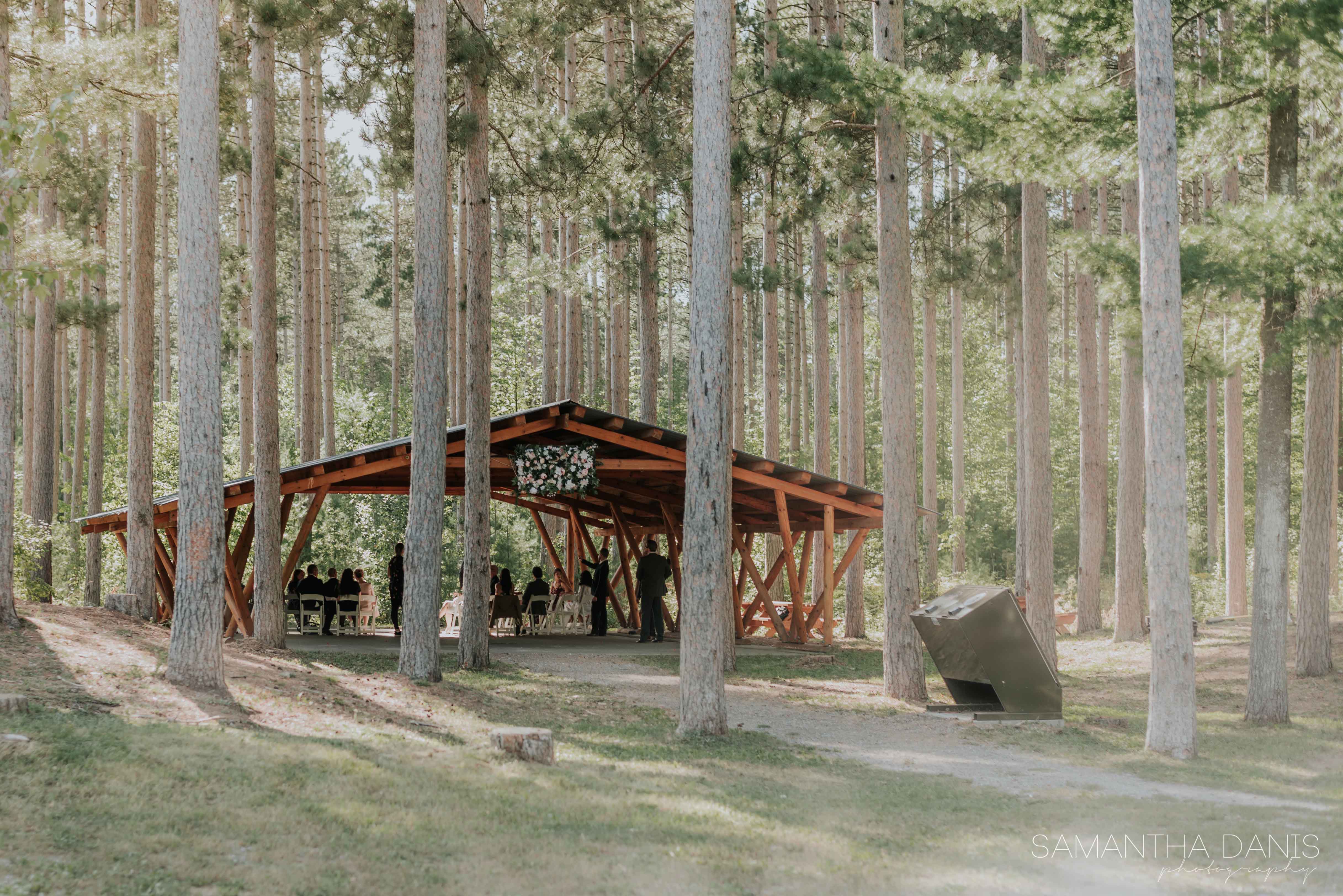 As she disembarked from the carriage I could see Max’s eyes welling with tears and just liked that, Chantal just burst into tears as well and then the guests did too. It was like they were seeing each other in an entirely different light and were falling in love all over again. It was absolutely beautiful to witness. Max walked down to meet her and they kissed and walked to front to greet their guests. The ceremony was filled with personal touches and humour thanks to the wonderful officiant. First bit of humour was when Chantal looks at Max right as they’re about to start and touches his face and exclaimed ”you shaved!”. Last time she saw him he had a beard, and now he was baby face smooth. 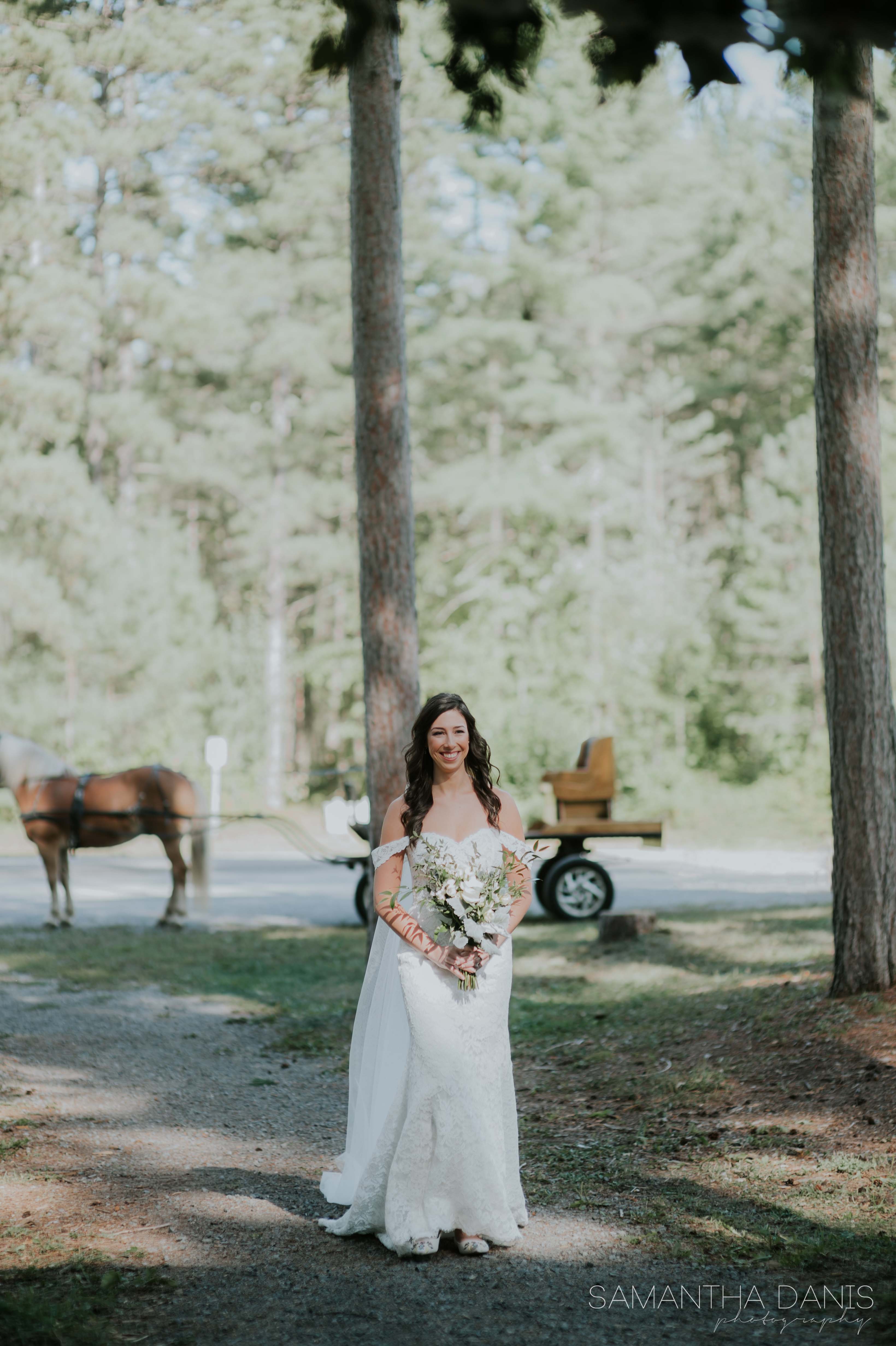 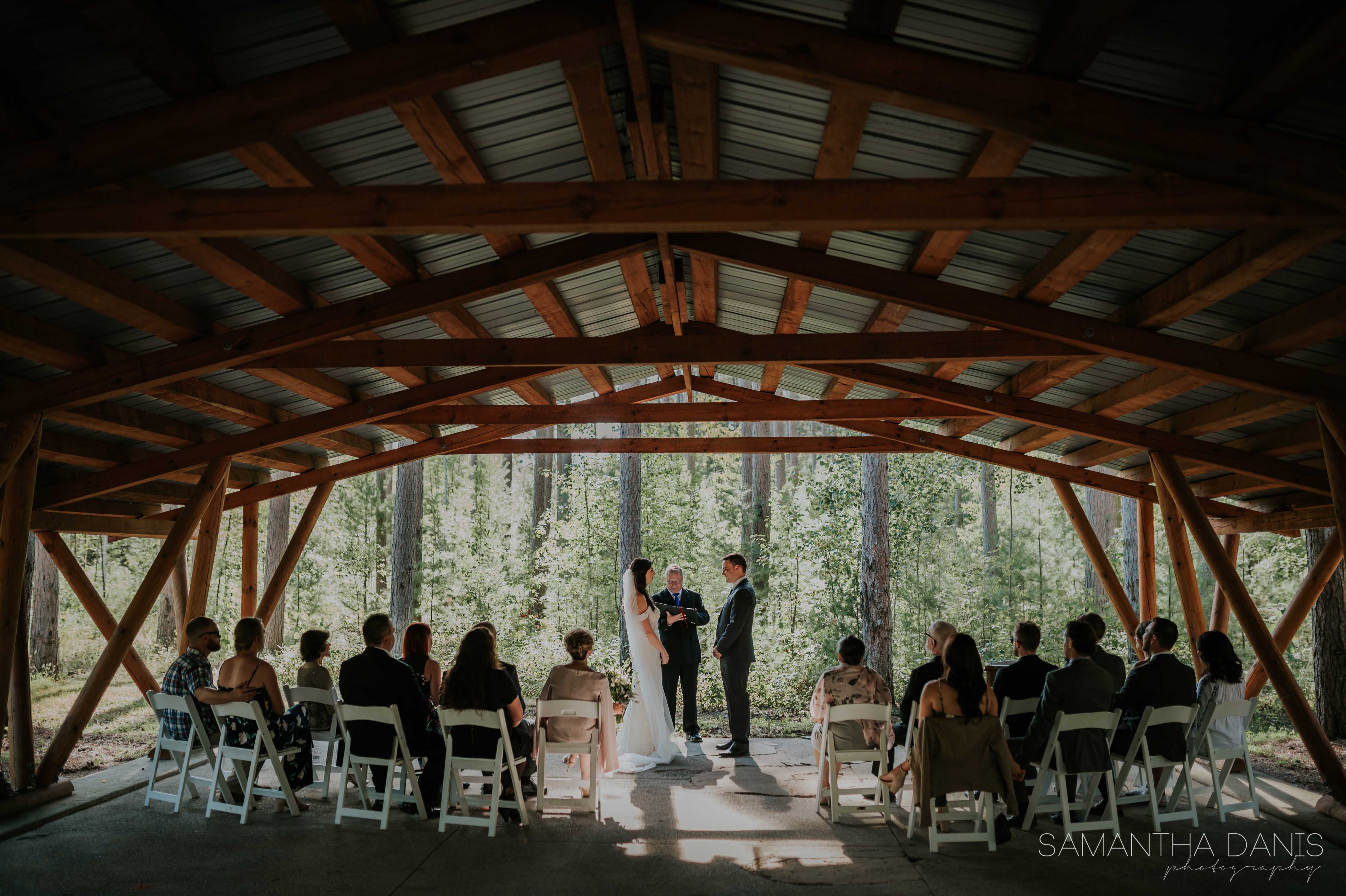 Our bride and groom both laughed and cried and so did pretty much everyone in attendance. I even sat back for a minute just to listen and take it all in. It was seriously a beautiful intimate wedding, perfect even.  After they signed their official documents, to which Chantal said; ” The first official time writing Mrs. Charbonneau!” and giggled, they hugged each other their parents and Chantal’s grand-mother who is very near and dear to her heart. And just like that they were husband and wife! I was standing in my usual spot down the aisle waiting for them to walk down to me but they just stood at the front and smiled for my camera. So I put it down and kinda just stared and Chantal looks around and says ”Well let’s get the family photos started.” I was so confused, aren’t you walking down the aisle or announcing anything, I asked. She just looks at me and laughs, nope let’s get to it! So informal and awesome, it caught me off guard! 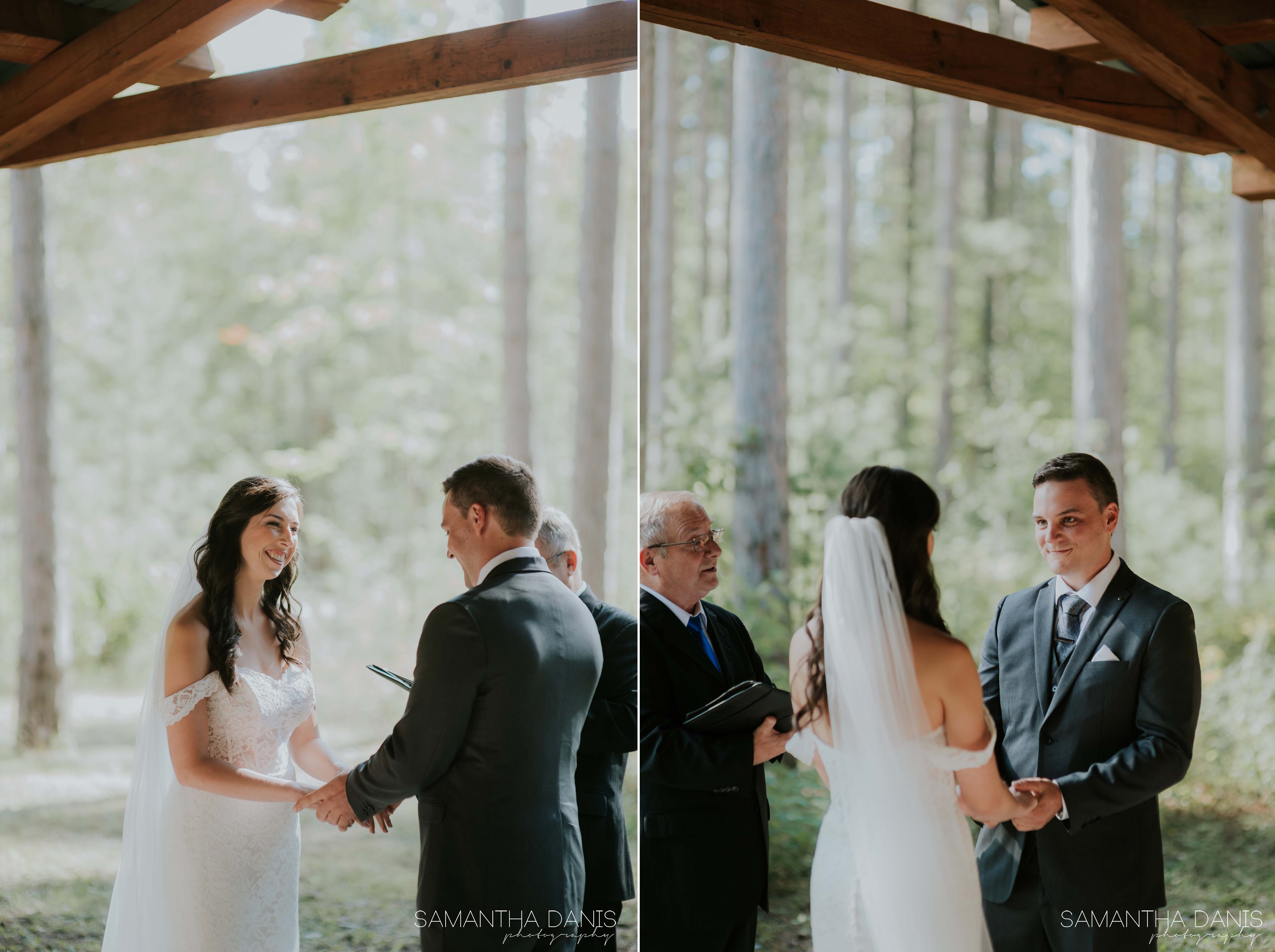 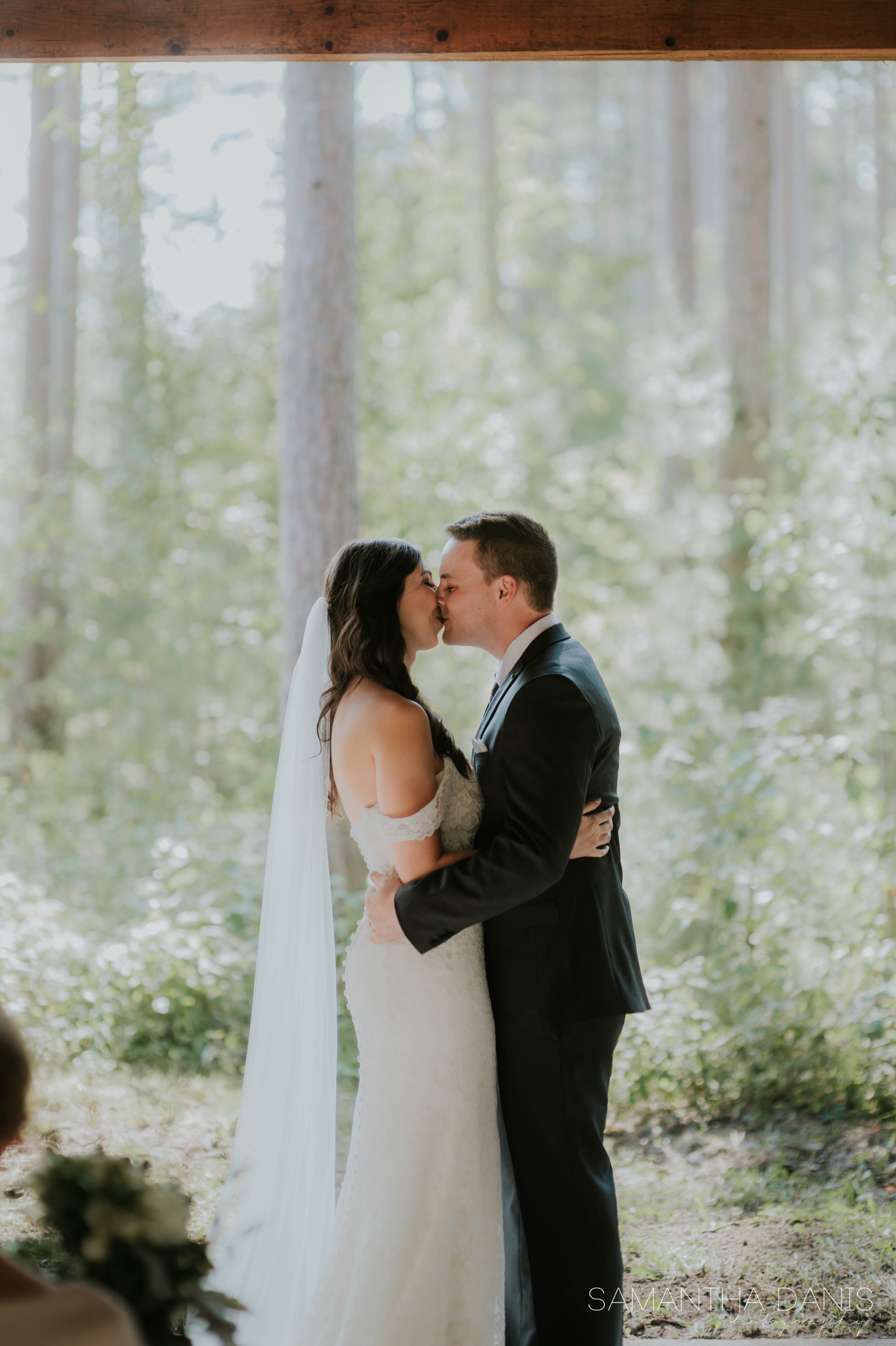 We proceeded with a quick group shot and family photos before chasing the light for the rest of the evening. The sun was gorgeous and providing beautiful light through the trees which served as the most amazing backdrop for our photos. Chantal let me be creative and do basically what ever I wanted and rolled with it, what more could a photographer ask for? The bridal party was also super informal in the way that the boys all wore their own suits that they owned and the girls wore these gorgeous floral jumpsuits in different colours. It was all so different but it worked so damn well together. It really put a smile on my face how something so simple could be so beautiful. We also did a quick shot with the horse from the carriage ride before it had to run off and sadly, it drooled onto Chantal’s dress and left a palm sized yellow-brown stain. It was like ew, but omg how do we fix this? Luckily, Isabelle, one of the Bridesmaids had a tide pen in her car and saved the day! The stain was gone within a minute. After some smoke shots and fun group shots it was time for me to whisk my bride and groom away for private portraits. 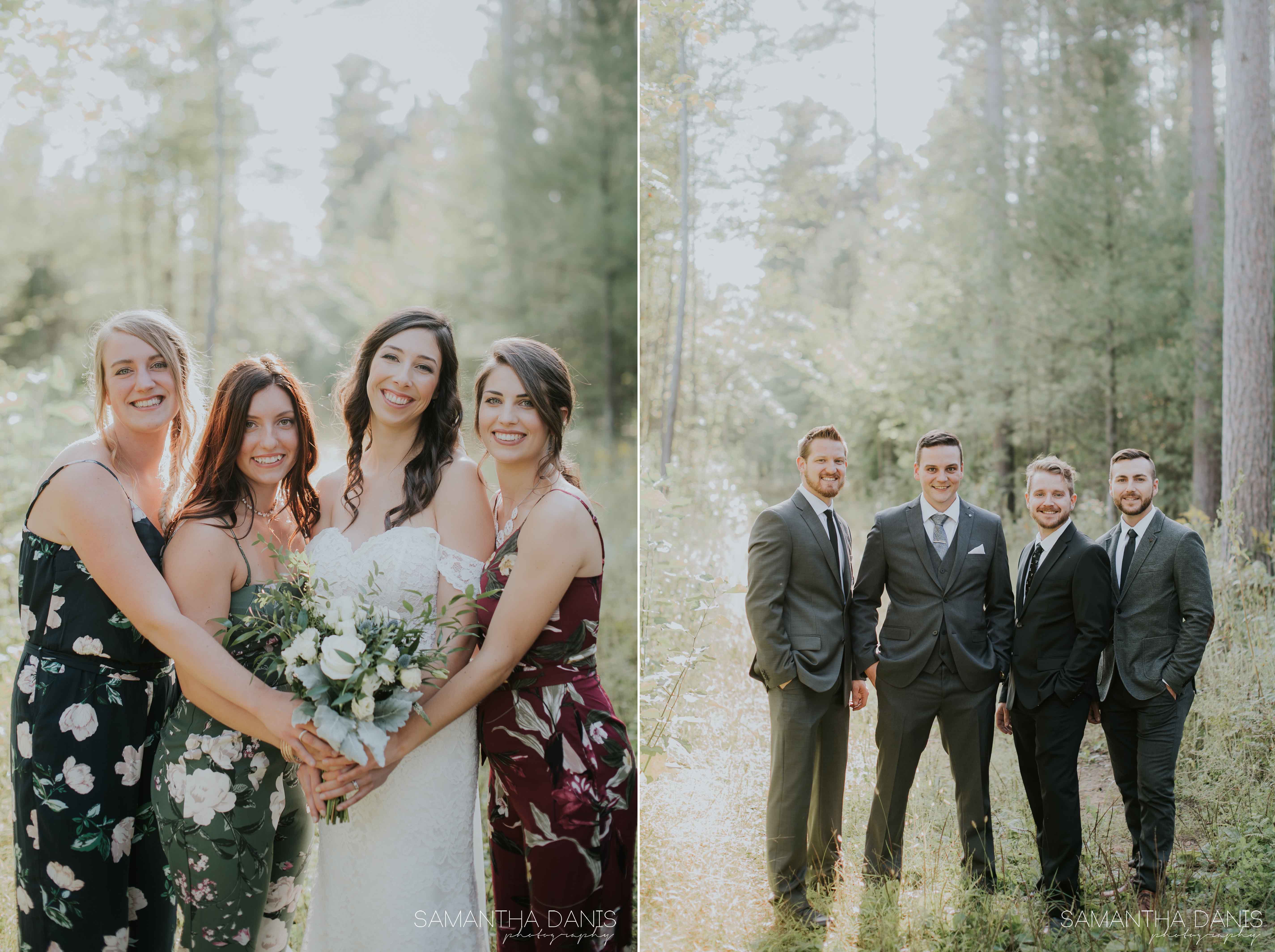 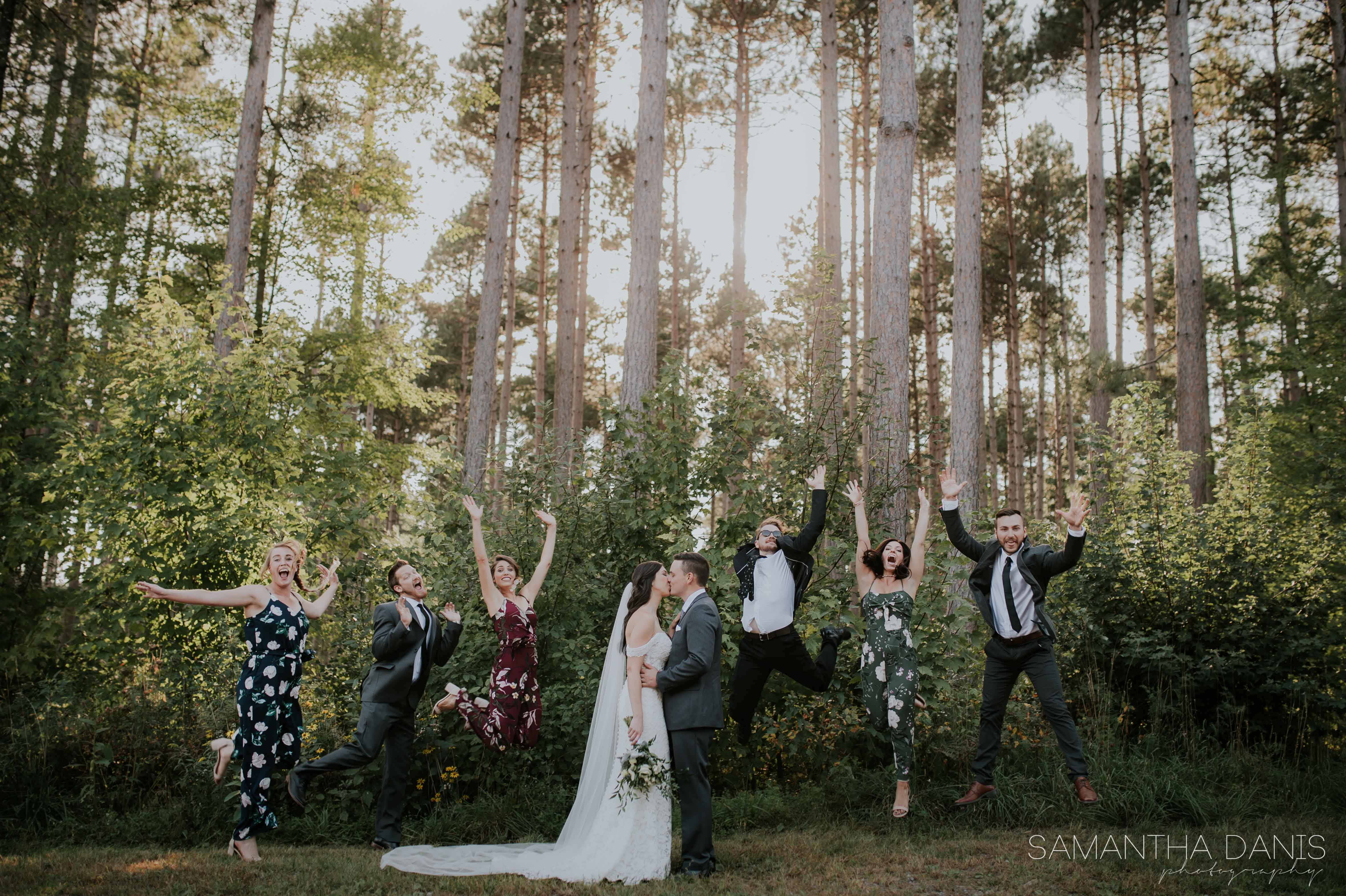 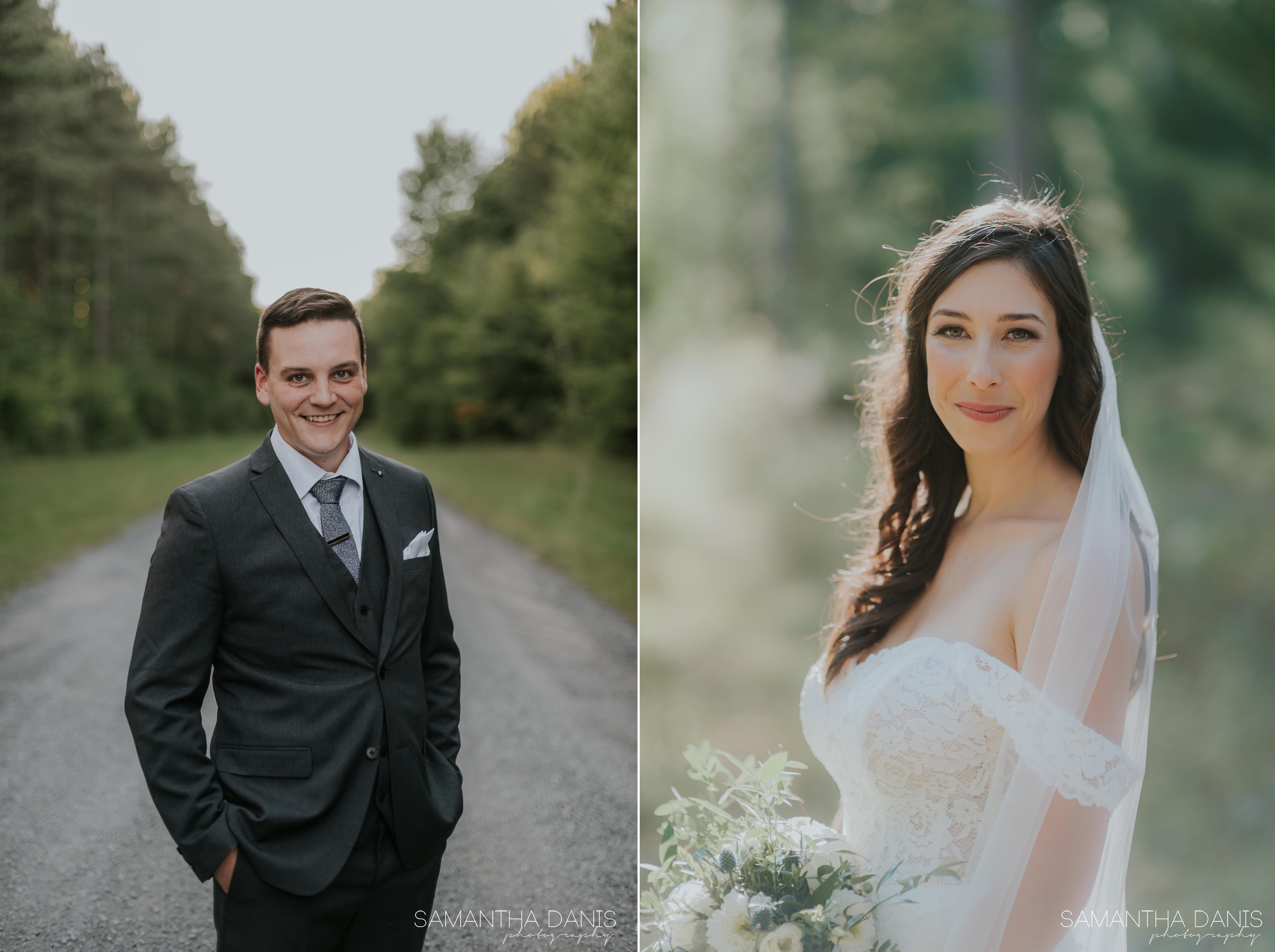 We wandered over to the other side of the road in a little secluded area where we had scouted a couple weeks prior. Right before heading over though we opted to stop in front of these cool piled logs on the side of the road to see what we could create, and of course it was magical because these two are naturals. We chased the light for the rest of the time we had together. In the woods the light pierced through so perfectly that we had to use our Mist in a can to make a beautiful dramatic shot! Thank you Alex Boone Photo for second shooting and assisting, these shots were possible thanks to you sir. We ended our time together with a few fun shots before heading back over to the Pavilion for the limo to come pick them up. 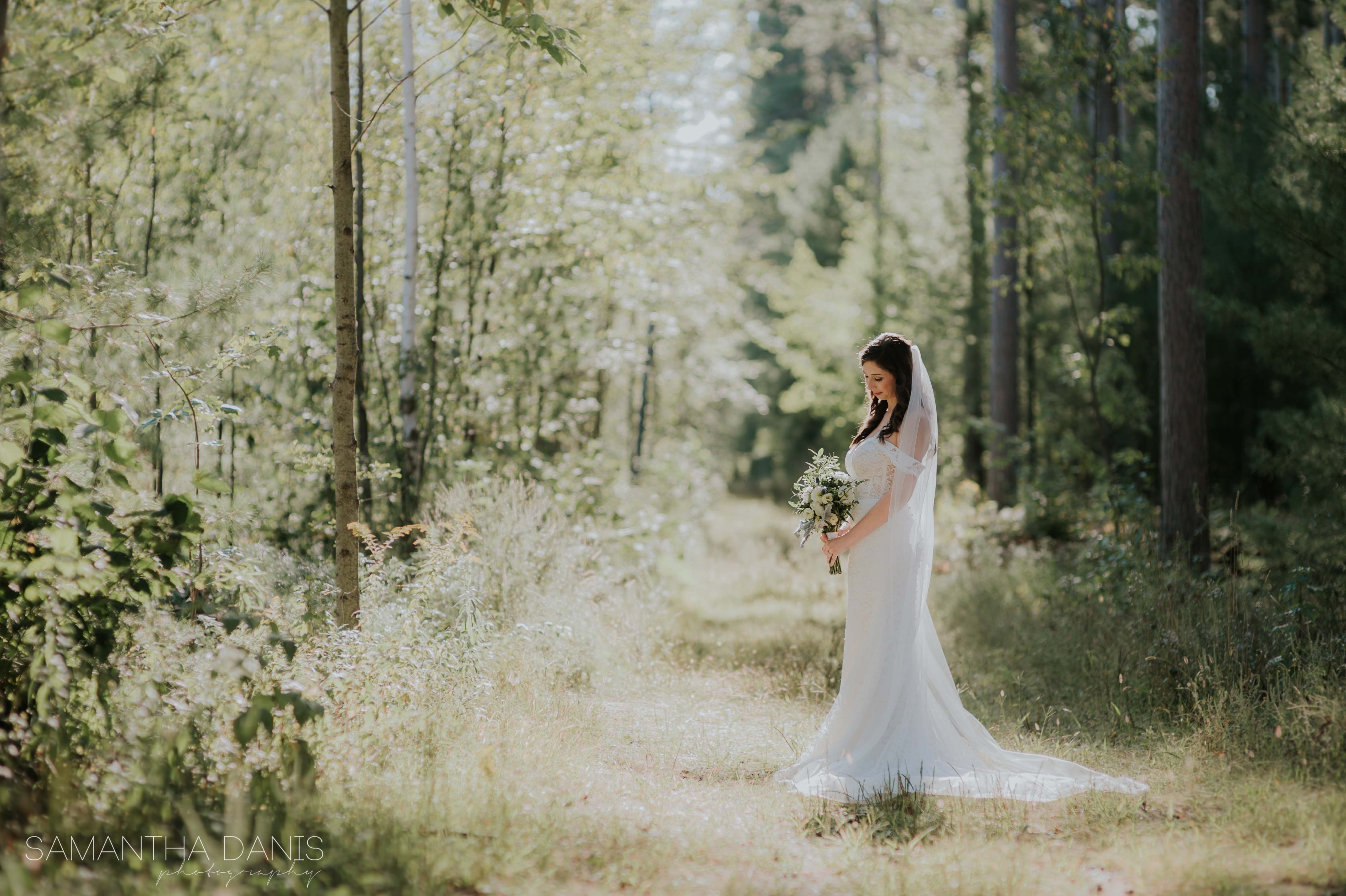 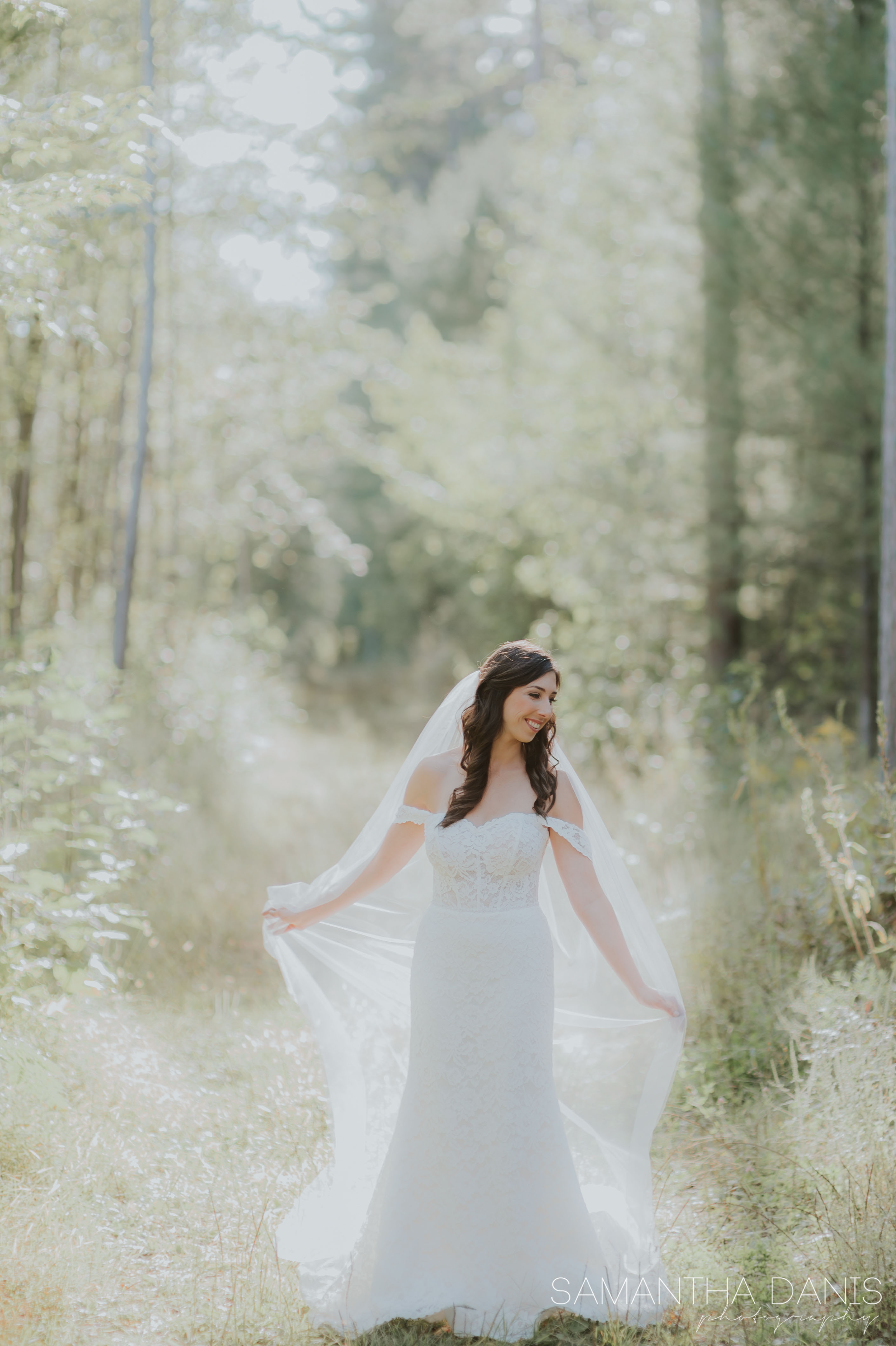 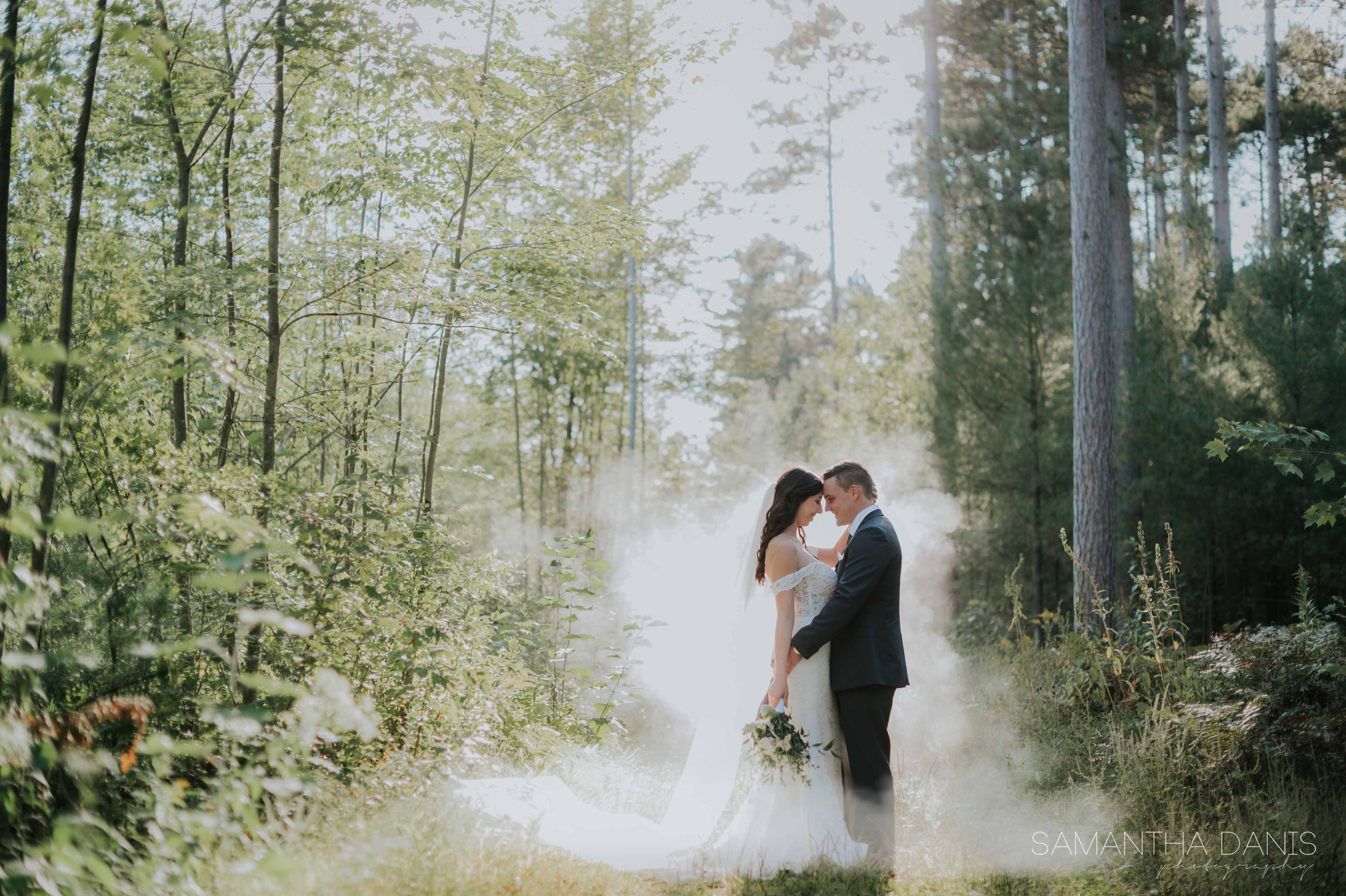 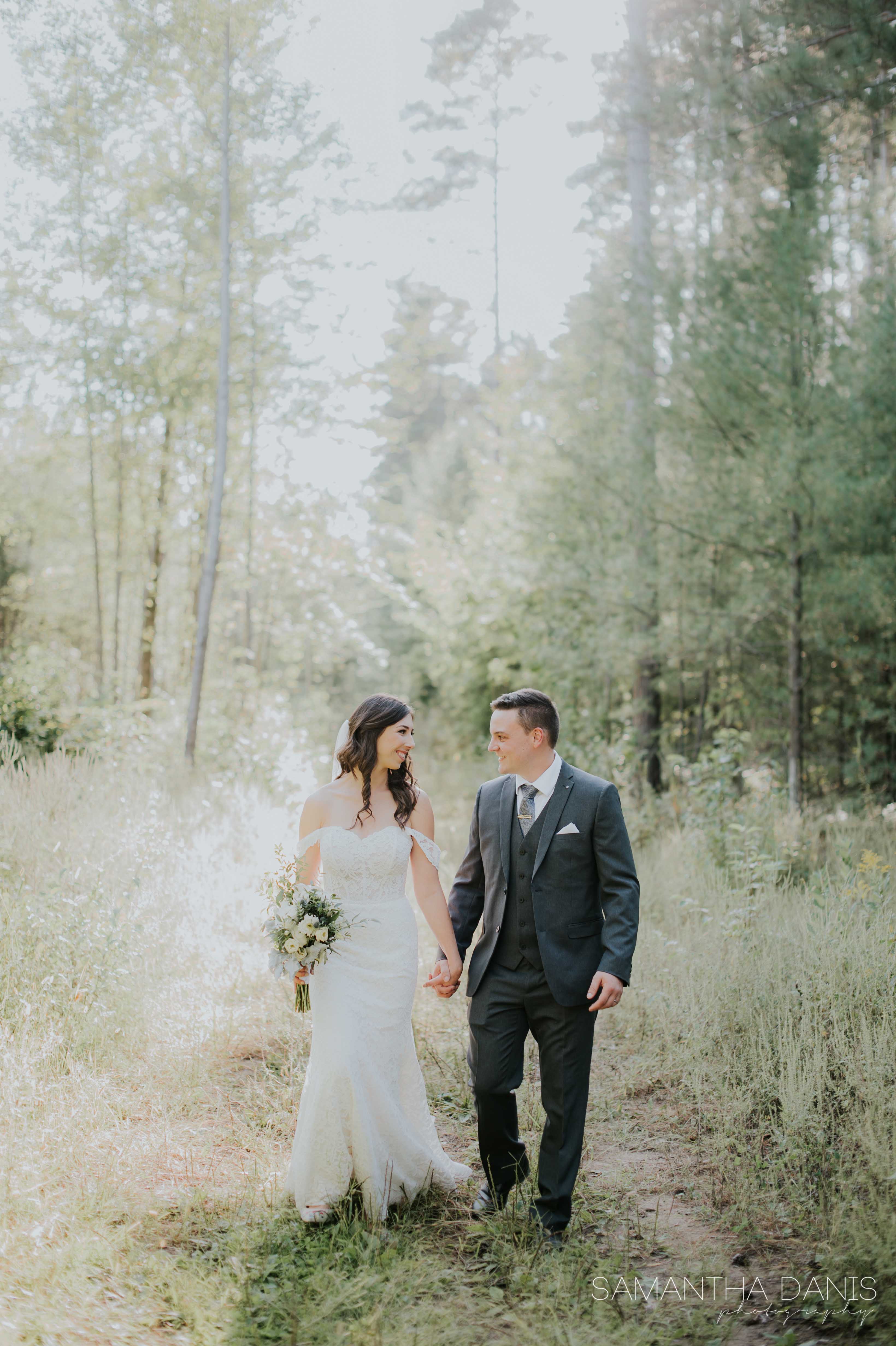 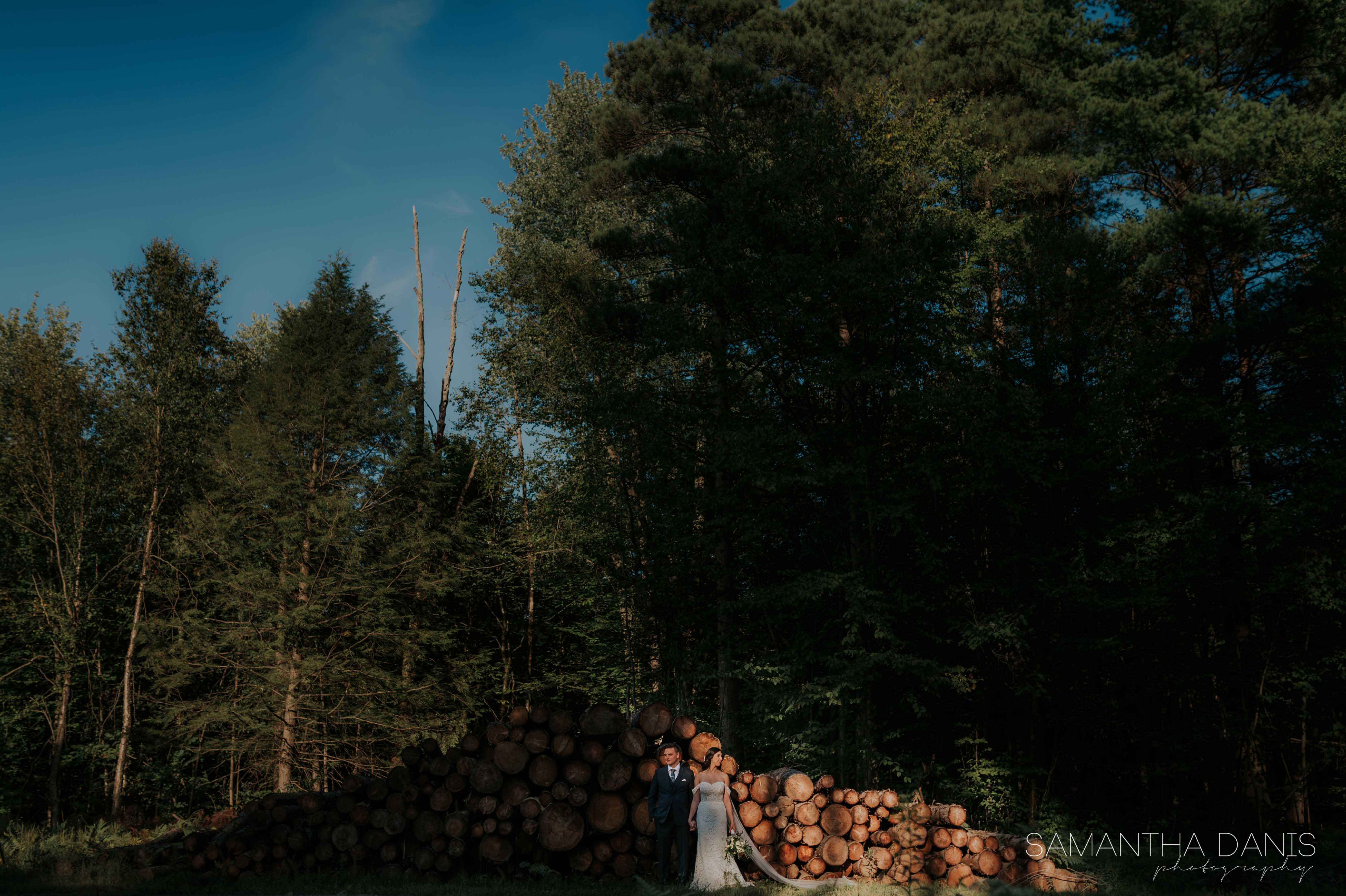 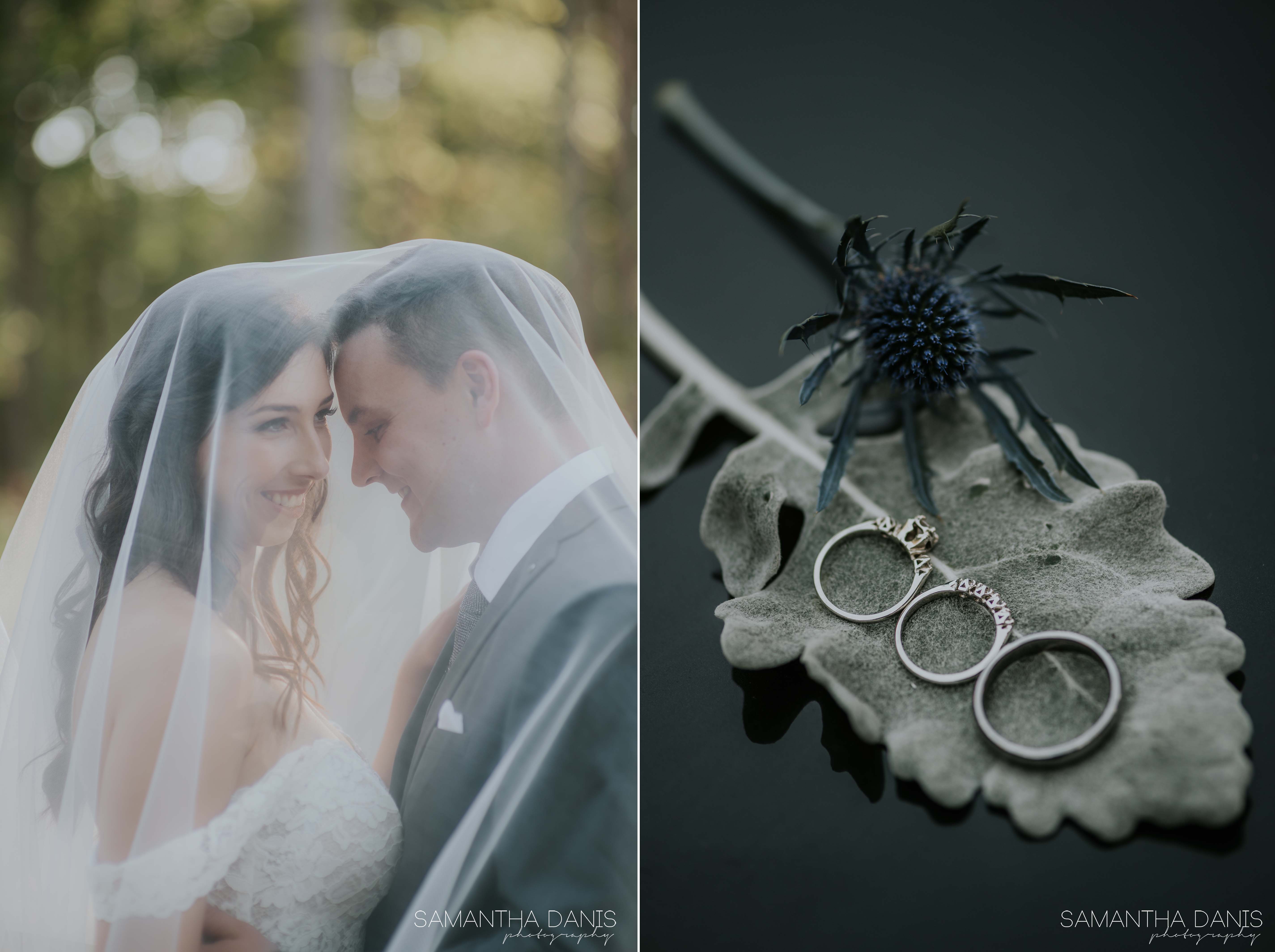 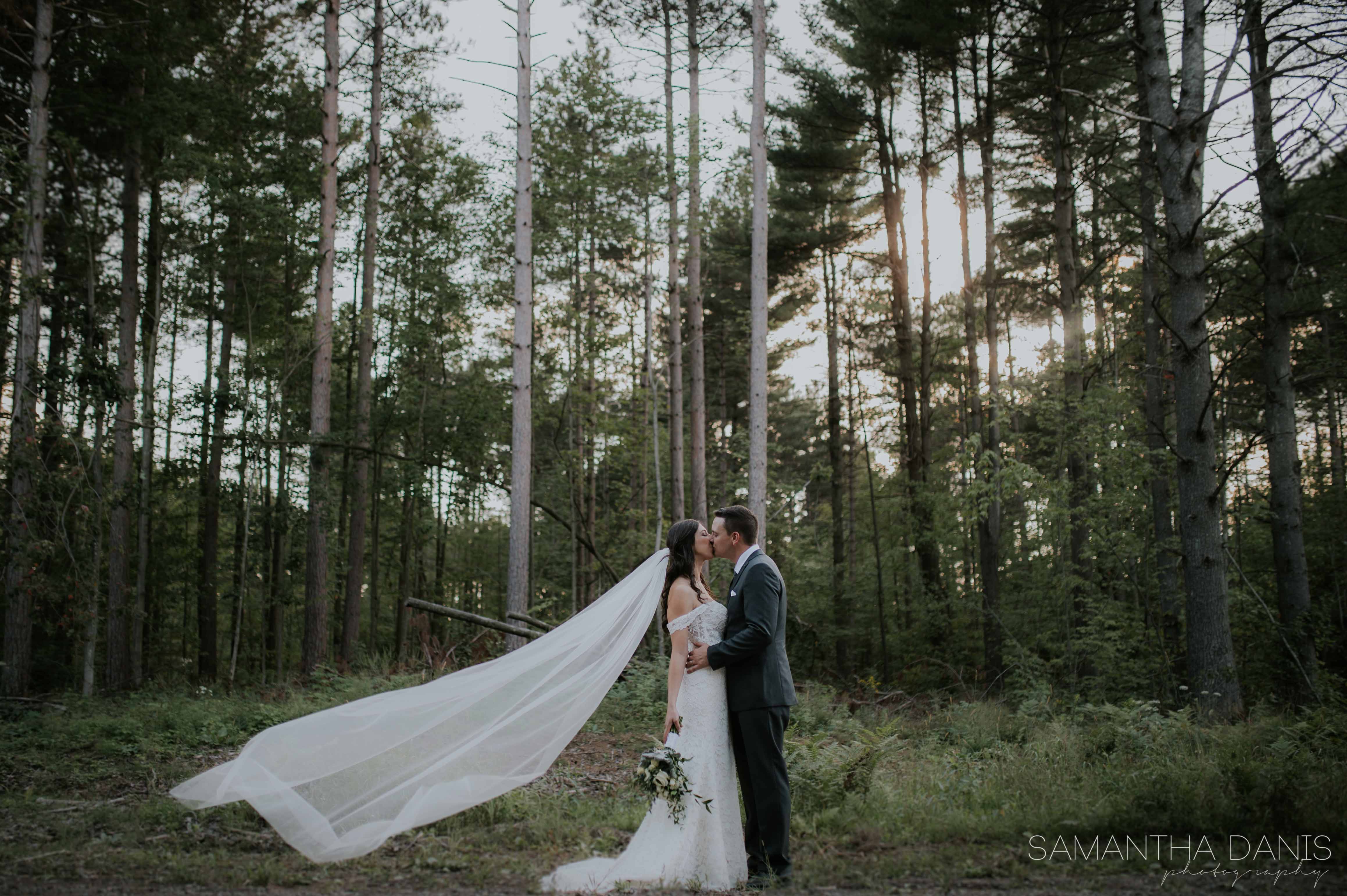 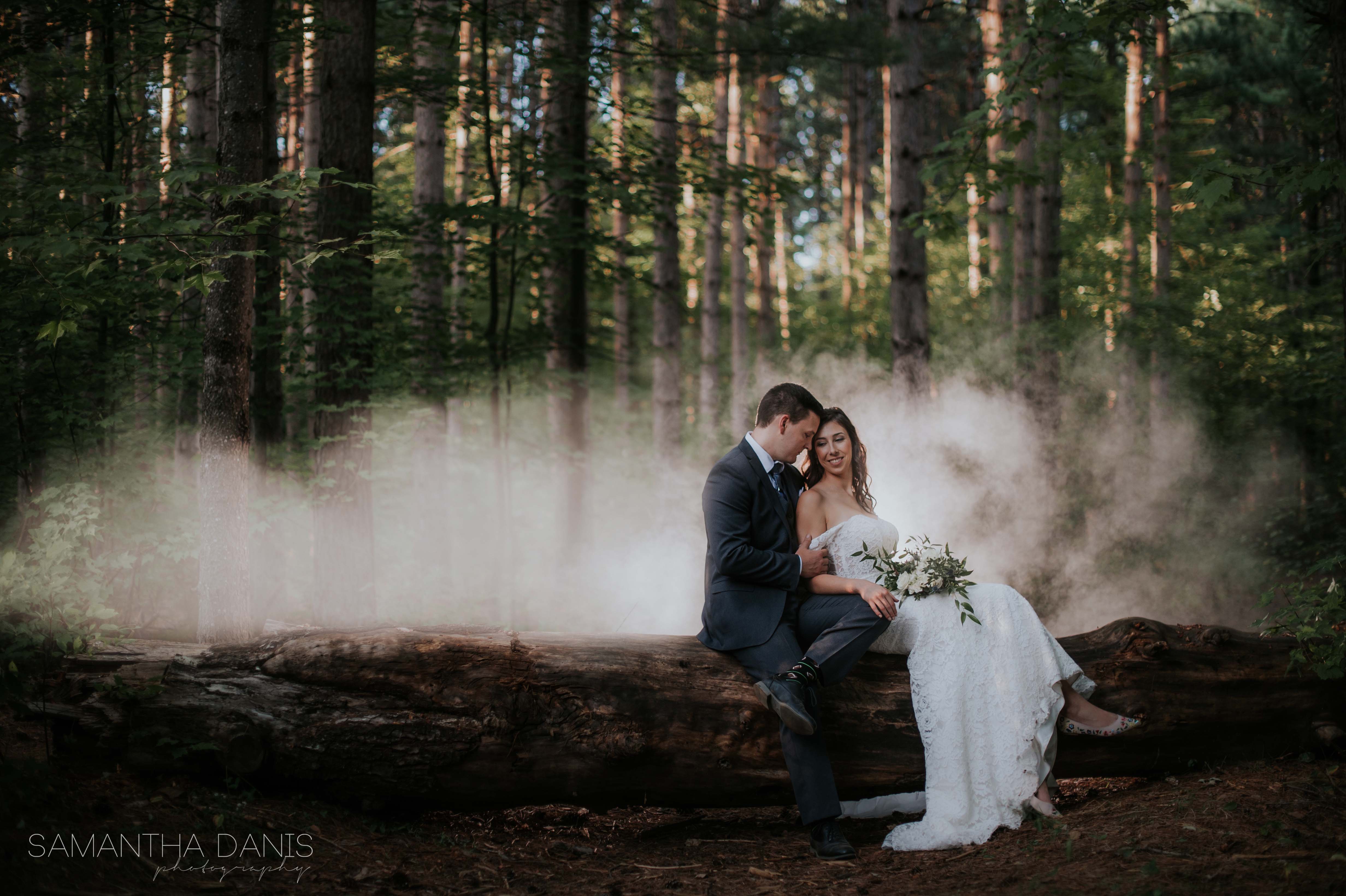 So funny story before I end this blog post: The limo was suppose to pick them up at the ceremony location for 6:45. The limo was nowhere to be found at 6:50 so Chantal called her bridesmaid to get the limo companies number. When she called them they said that they didn’t have that address and were told to pick them up at 7:30 at their home. Chantal had repeated to them that she asked to change the Pick up for 6:45 and the ceremony space and they said they had no notes about that! Max at this point had called his groomsmen to come pick them up but the Limo company re-assured them they would be there in 10mins. It was 7pm and I had to leave them as I had somewhere to be but I felt so horrible that they were in the woods alone! Thankfully they made it out alive and no bears ate them.

Thank you Max and Chantal for trusting me in capturing such a special moment in your lives. I truly cherished every moment we spent together. xox

Sam, what a pleasure it was to see you again ladt Friday!!! Just wanted to take a minute to say WOW girl, you sure can take pictures. These are absolutely amazing!!! You really captured their fun loving side as well as their love for each other. You created magic in that forest that they will cherish forever. You are so talented and both JP and I are in awe of your creativity. Thank you for preserving these memories for them and for us.