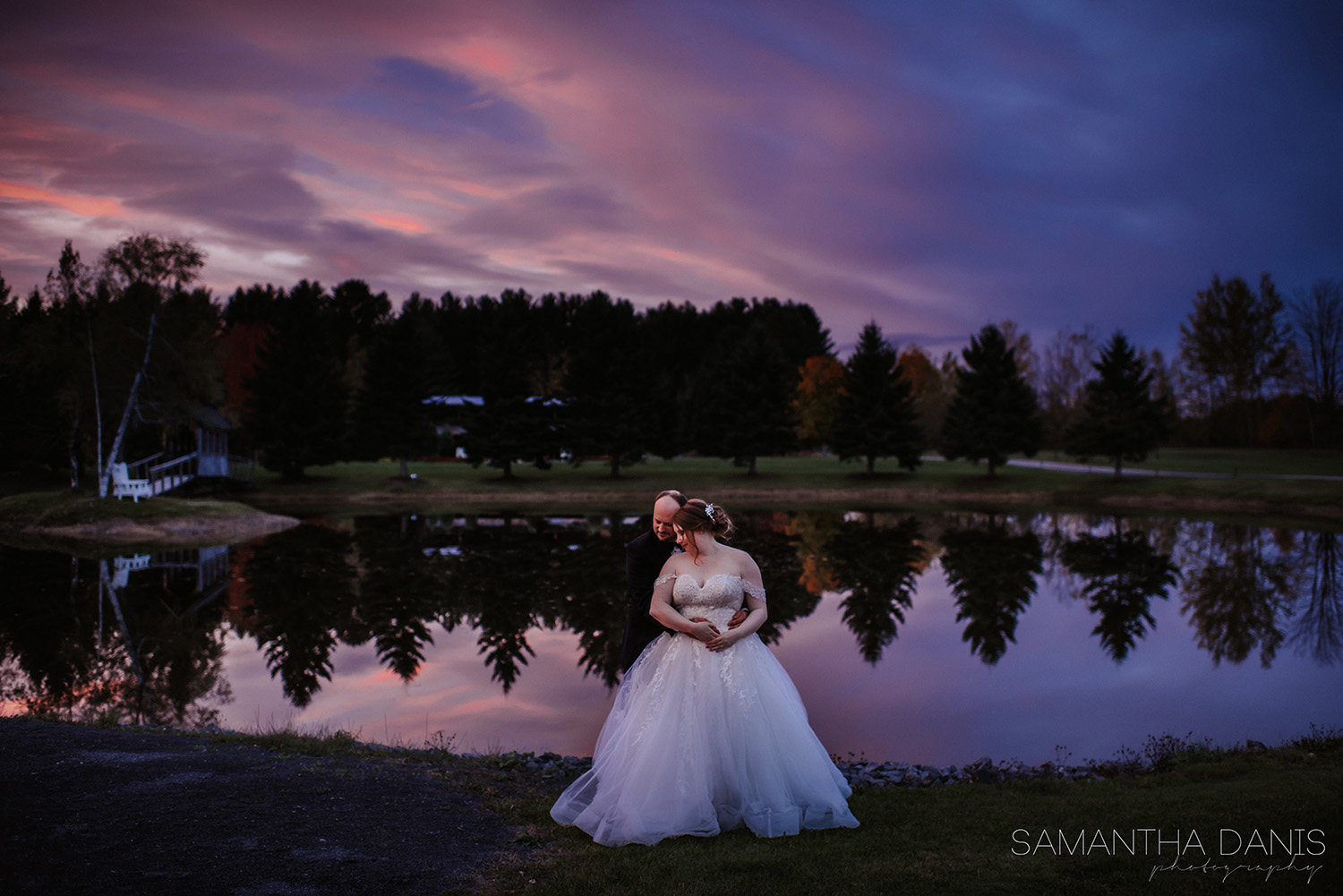 Erica and Eric’s day at Beantown Receptions was absolutely perfect. Like, I don’t even know where to start because it was so beautiful. They got the perfect light, a cloudless day and a beautifully crisp fall day.

I started things off with the ladies at the RiverRock Inn in Rockland. I arrived to find Long (my new industry BFF) already hanging out with the ladies as they were finishing their hair. Erica was in the makeup chair just hanging out while all the commotion went on around her. I got straight to work on doing some details because she specified to me how important it was to capture her invites. She painstakingly spent HOURS cutting those out with a Cricut so they needed to be captured haha. I also saw both her pairs of shoes and just… WOW! They were both stunning. The first, a pair of silver Badgley Mishka heels and the second, red sparkly keds. Couldn’t go wrong with either so OBVIOUSLY both were photographed. I walked into the adjacent room to find Erica’s beautiful ball gown hung up in all of it’s glory. It truly is a stunning dress and fit her so perfectly. I also saw the murphy bed Erica had been telling me about. 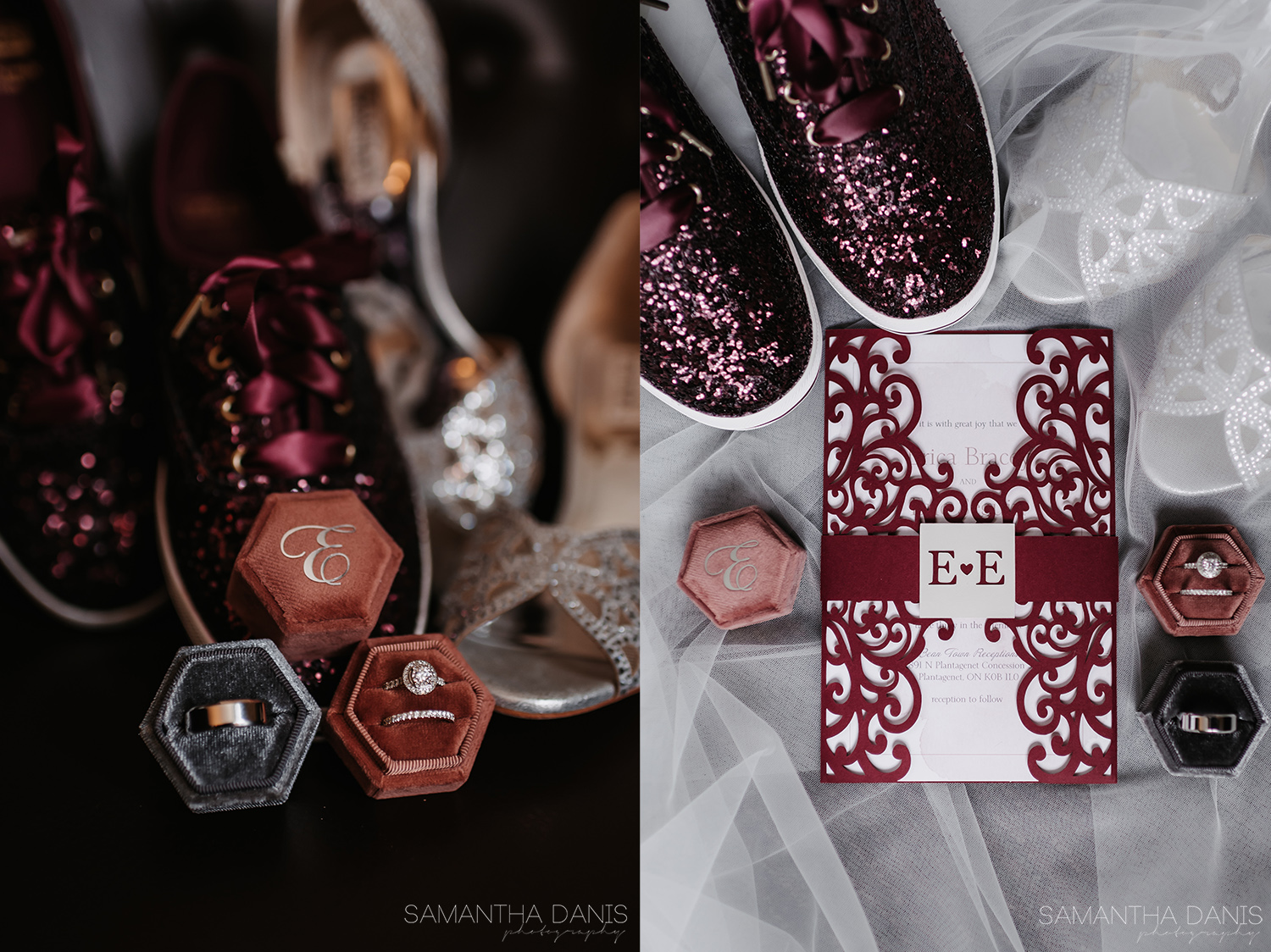 Side story. When the ladies arrived to their room, they noticed the murphy bed’s latch was broken and wouldn’t stay in the vertical position, essentially being a hazard of falling on someone. The Hotel was apparently full and couldn’t accommodate a room switch so the girls improvised. They duct taped the heck out of it AND pushed a coffee table up to it just to be sure. Independent ladies got things under control.

We’d run over our checkout time and finally started getting Erica in her gown. Her mum and sister, both there to help her. As they were tightening the lace up back, I noticed they weren’t pulling too hard, obviously not wanting to hurt Erica. So my bridal salon experience kicked in and I jumped in the pull as hard as I could! Still allowing her to breathe, but making sure things stayed in place. We had a good laugh and I let mum and sis get back to it. The final touches made me laugh because Erica just couldn’t do a few things with her nails so her sister kicked in and helped put her earrings on for her and even her sparkly sneakers. We quickly went outside to find the rest of the bridesmaids waiting to see their bestie as a full blown bride for the first time. After opening their eyes and admiring the beauty that is their friend, they all went in for a big hug and on our merry way we went to Beantown Receptions for the first look.

Eric was already in position in the woods when I arrived, and boy did he look good! Man cleans up nicely, especially in that black suit. He was nervous as all heck to boot! He waited for Erica, fidgeting, you could see he was nervous, but so excited all at the same time. Erica rolled in by Golf cart where Pascale, the ever fabulous attendant at Beantown, helped her down and placed her so that she could finally get to see Eric. She walked up to him and tapped on his shoulder and he turned… instant tears. His jaw dropped and his eyes just welled up. Erica couldn’t help but smile as she saw her fiancés reaction. They reveled in the moment together, just letting the emotions flow. And then it was time for… MORE EMOTIONS. Well first, Eric gifted his bride a beautiful necklace for her to wear on the day. A little hiccup meant Pascale had to come to the rescue to untangle the chain but she succeeded and the crisis was averted.

Our bride and groom read out letters to each other, privately in that moment in the woods. Where only they (well and us but we don’t count) would hear the words and take them all in. They recounted their life together, moments that brought them joy and moments that just proved to them that they were meant to be together. Once again there were lots of smiles and tears. Mostly tears on Eric’s behalf which I obviously love to see. But lots of laughter which just wrapped everything up so beautifully. After the emotional moments were lived and done, we spent the next little bit in the woods just hanging out and capturing the beautiful couple in all their glory. Every time I looked over at Eric, he was looking at Erica, full of love and aw in his eyes. It really was the sweetest. We even got to try confetti cannons (well not really cannons but like, sticks?) which were super cute and I definitely gotta get me some. The wind didn’t quite cooperate with us but we still managed to get a couple fun shots! 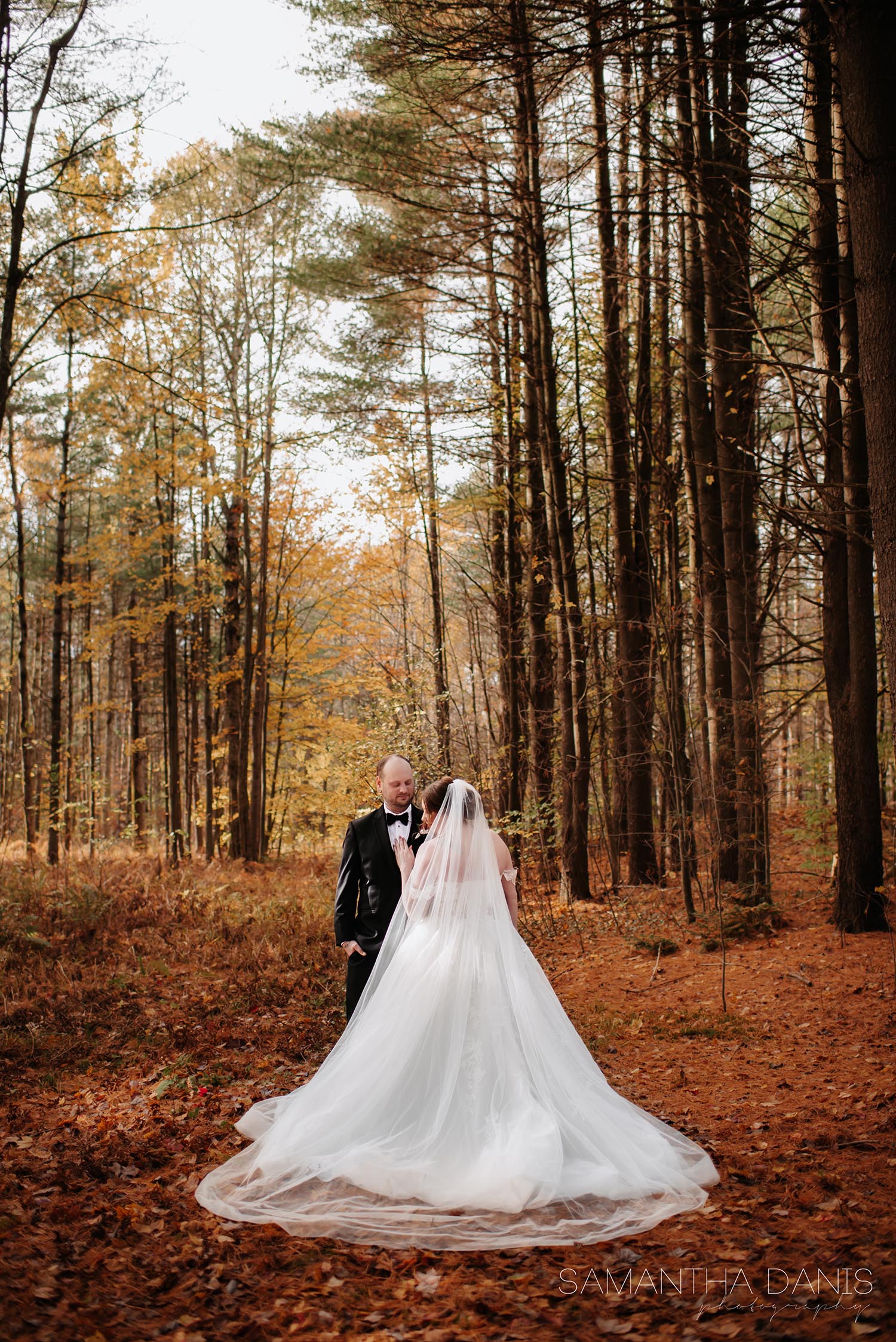 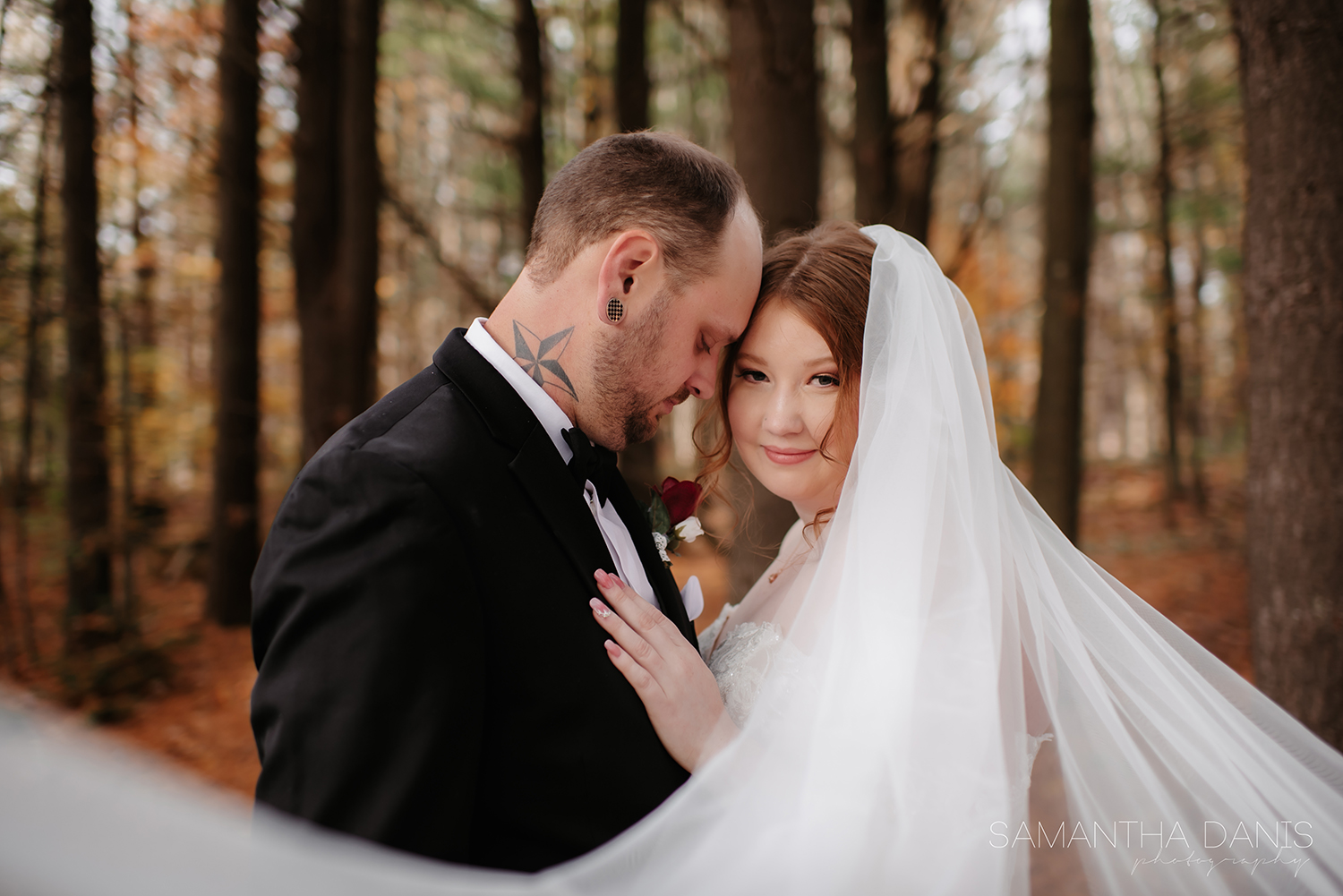 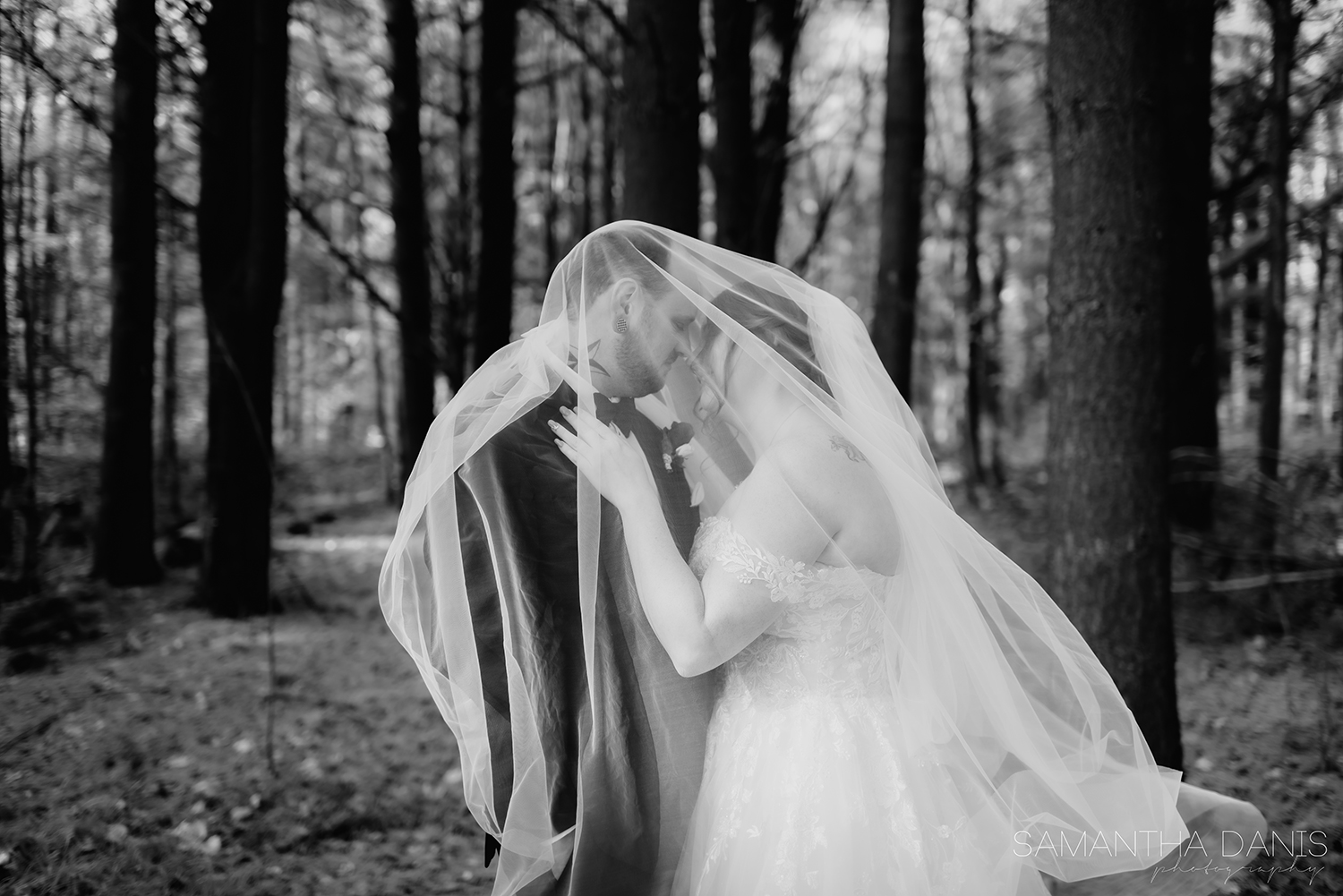 We then made our way over to the wedding party where we had fun making them be silly together for a brief moment. It was a little chilly, but really not that bad for a later October day so we did all photos outdoors in the beautiful sunlight. As the sun started to dip, it was time to go hide everyone as the guests had started arriving and it was time to get the ceremony started. 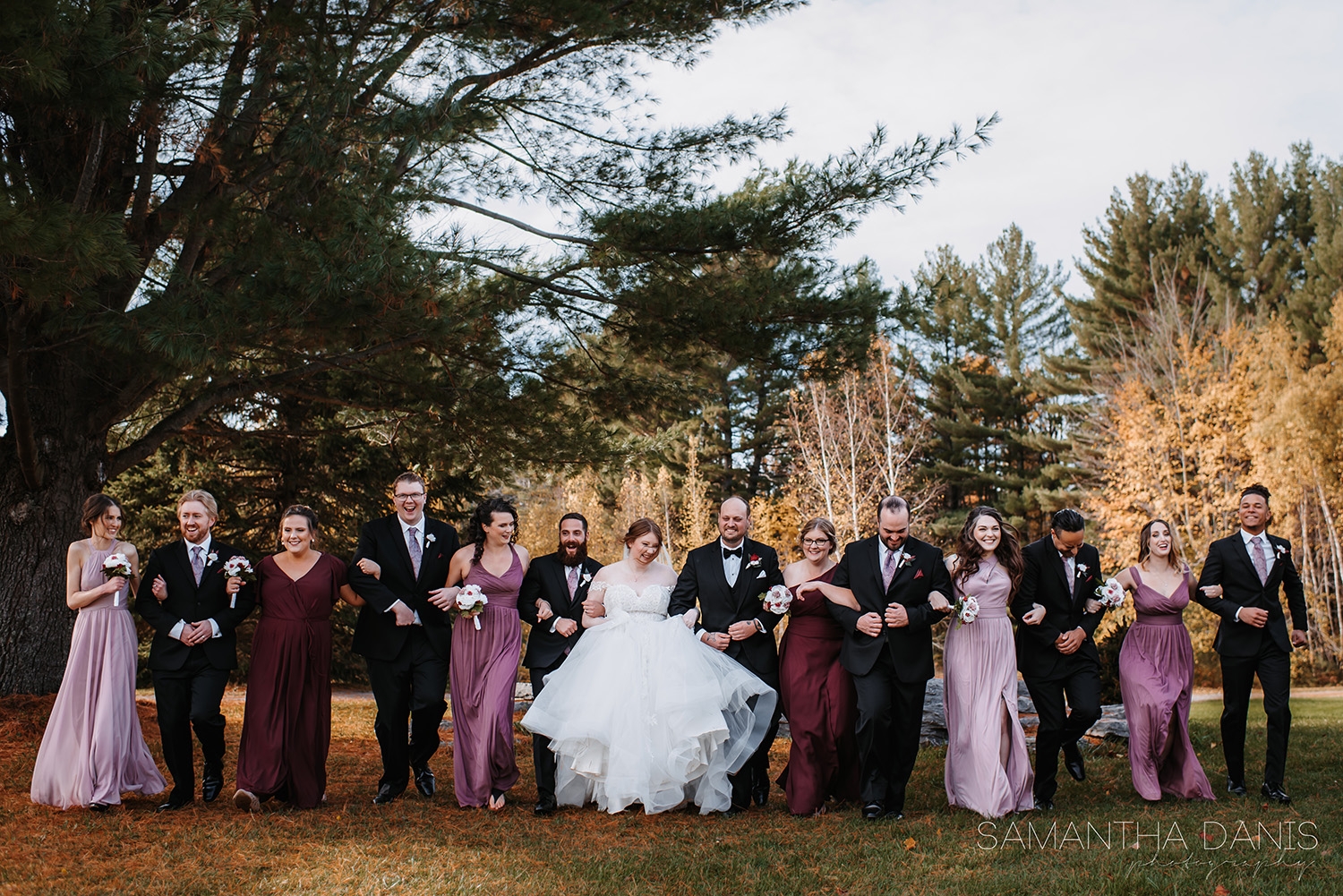 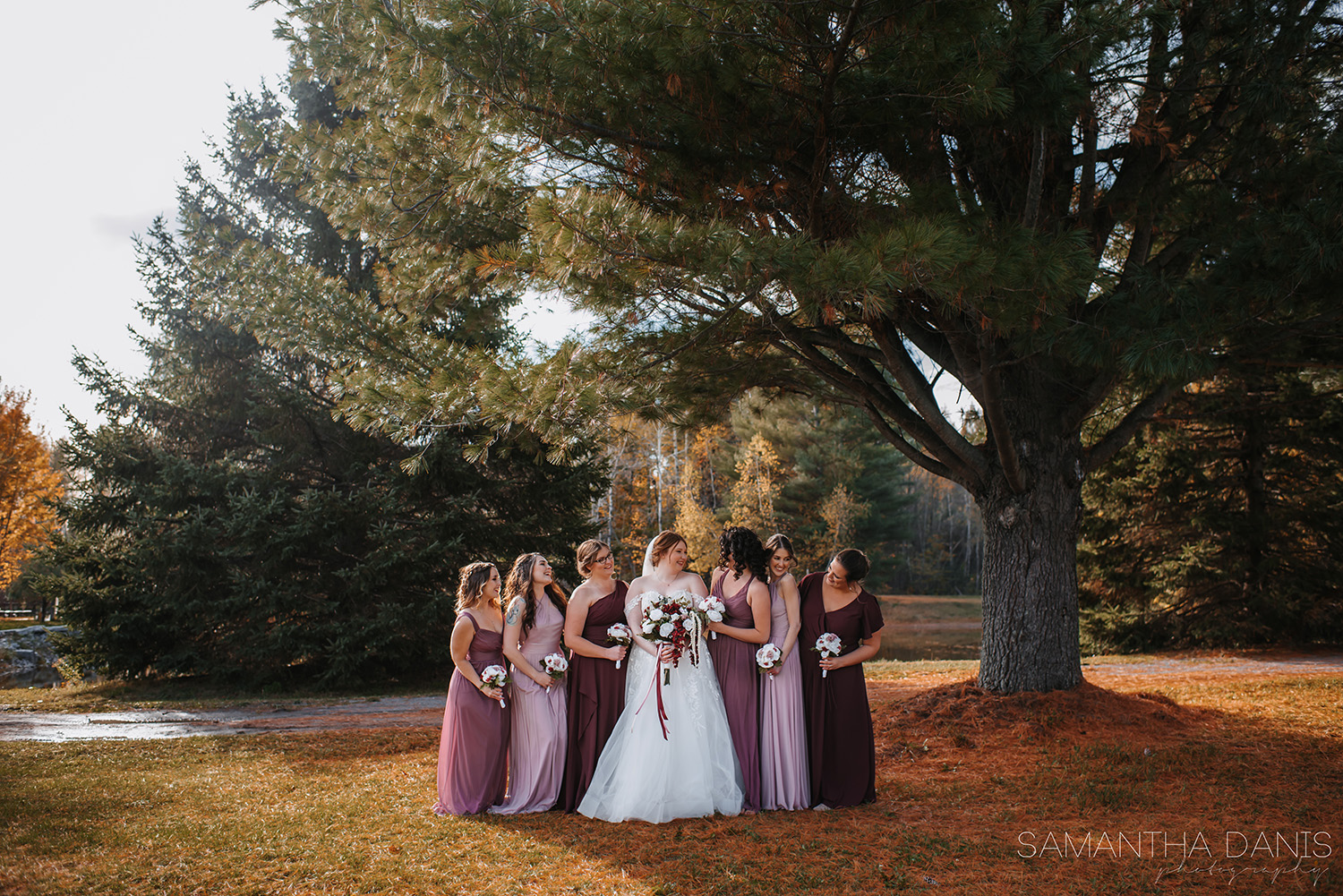 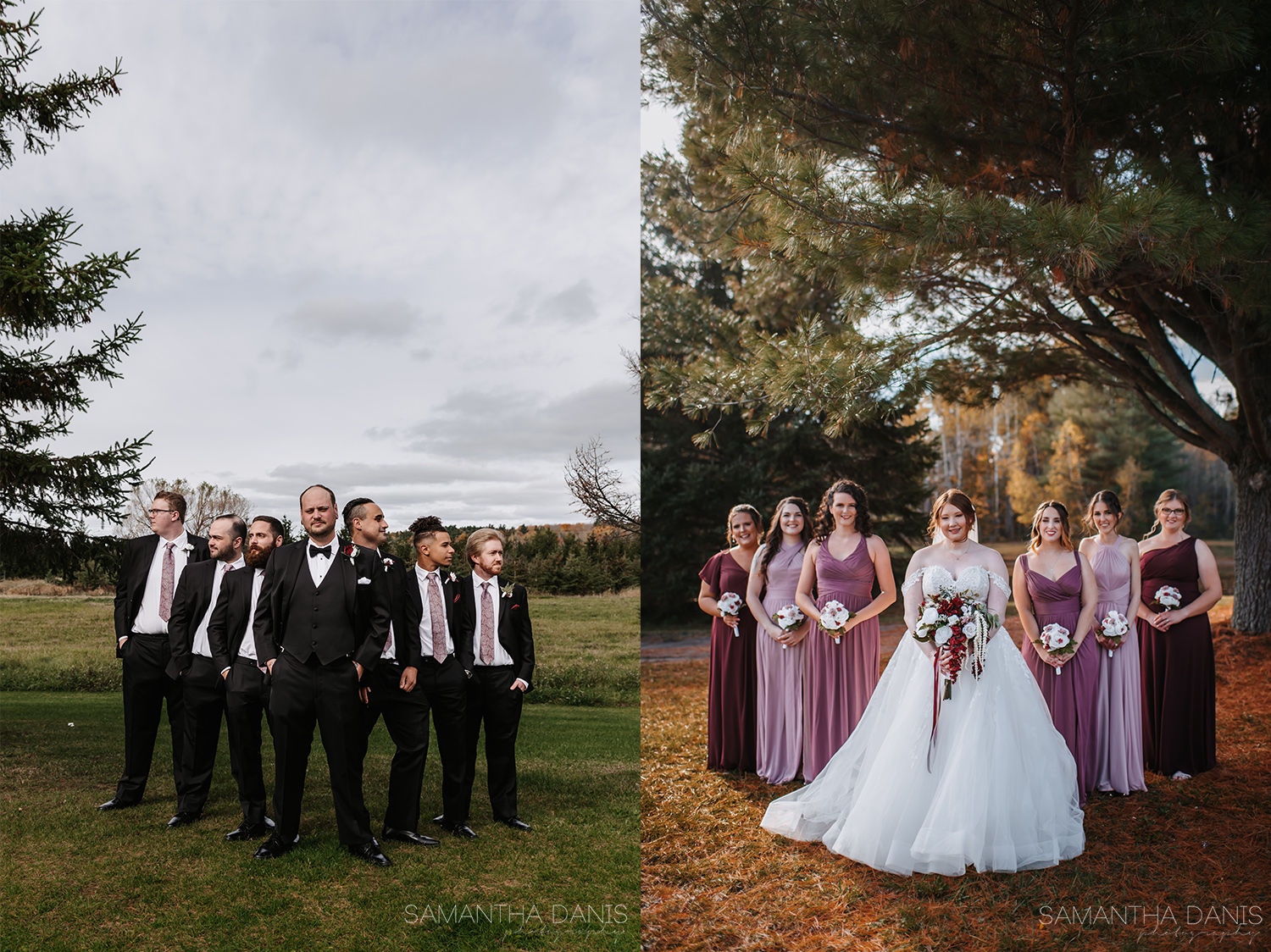 I often see comments online of couples forgoing a first look because they want the emotions for seeing each other down the aisle to be IT, THE MOMENT. But Erica and Eric proved that you can have TWO of those moments. Because they’re both very different from one another and the emotions are just as strong. When Eric was awaiting Erica at the end of the aisle, he actually had to stop and take a few very deep breaths. Leaned his head back and exhaled. Then he teared up as Erica made her way down with her dad.

The ceremony was officiated by Brigitte Samson and it was absolutely beautiful. The fall leaves blanketing the ground, the fall crisp air and of course the gorgeous sunlight made for everything to be perfect. There was lots of giggles during the ceremony but my favourite part was mostly that Erica and Eric couldn’t keep their eyes of each other. It was a long time coming and you could feel the happiness coming from them. After their first kiss as official husband and wife comes the traditional walk back down the aisle. What I loved about this one was Erica’s beaming smile and Eric’s finger gun and winks to the guests. It was so cute as they hopped onto the carriage and went on their horse and buggy ride around the property for the first time as husband and wife. 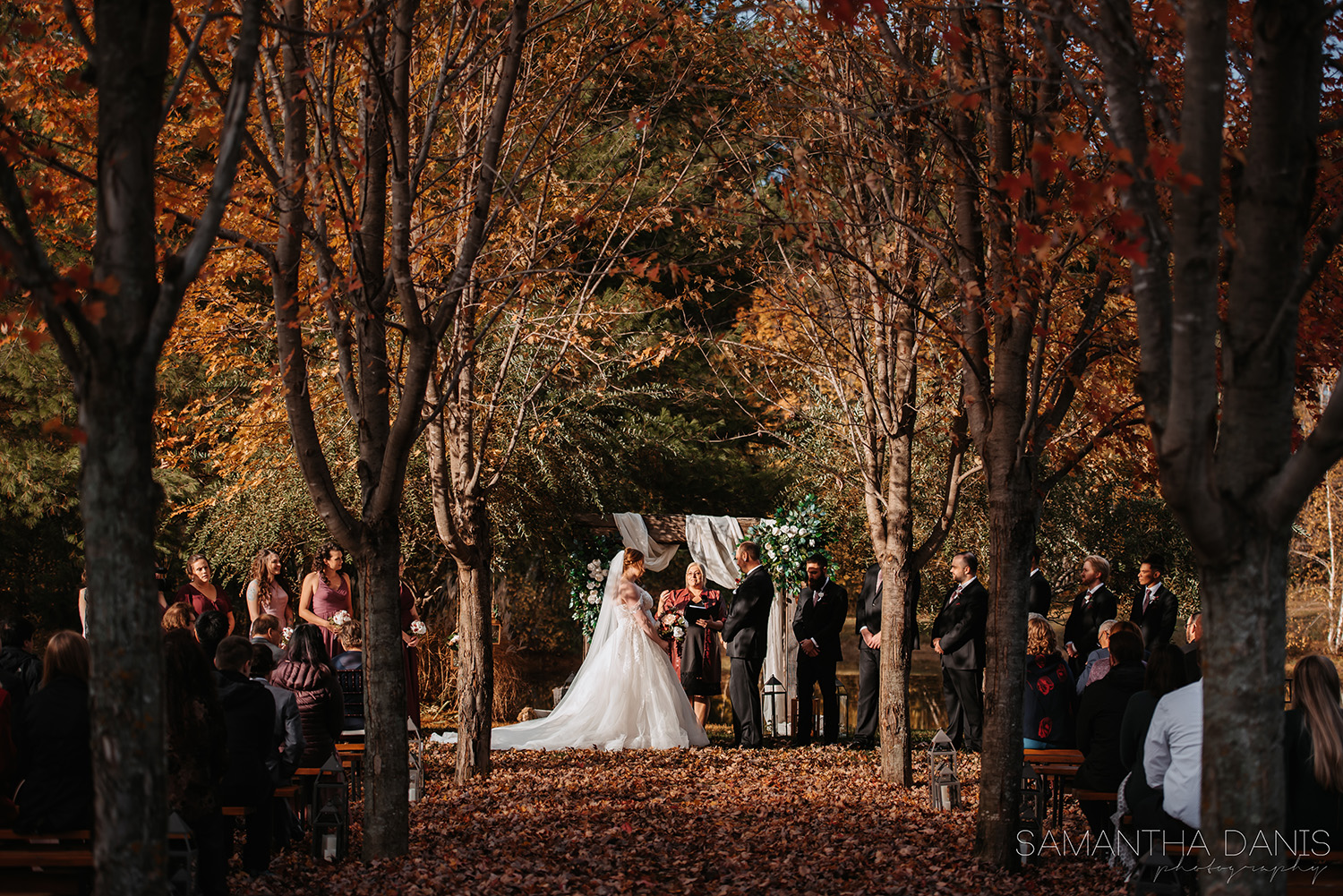 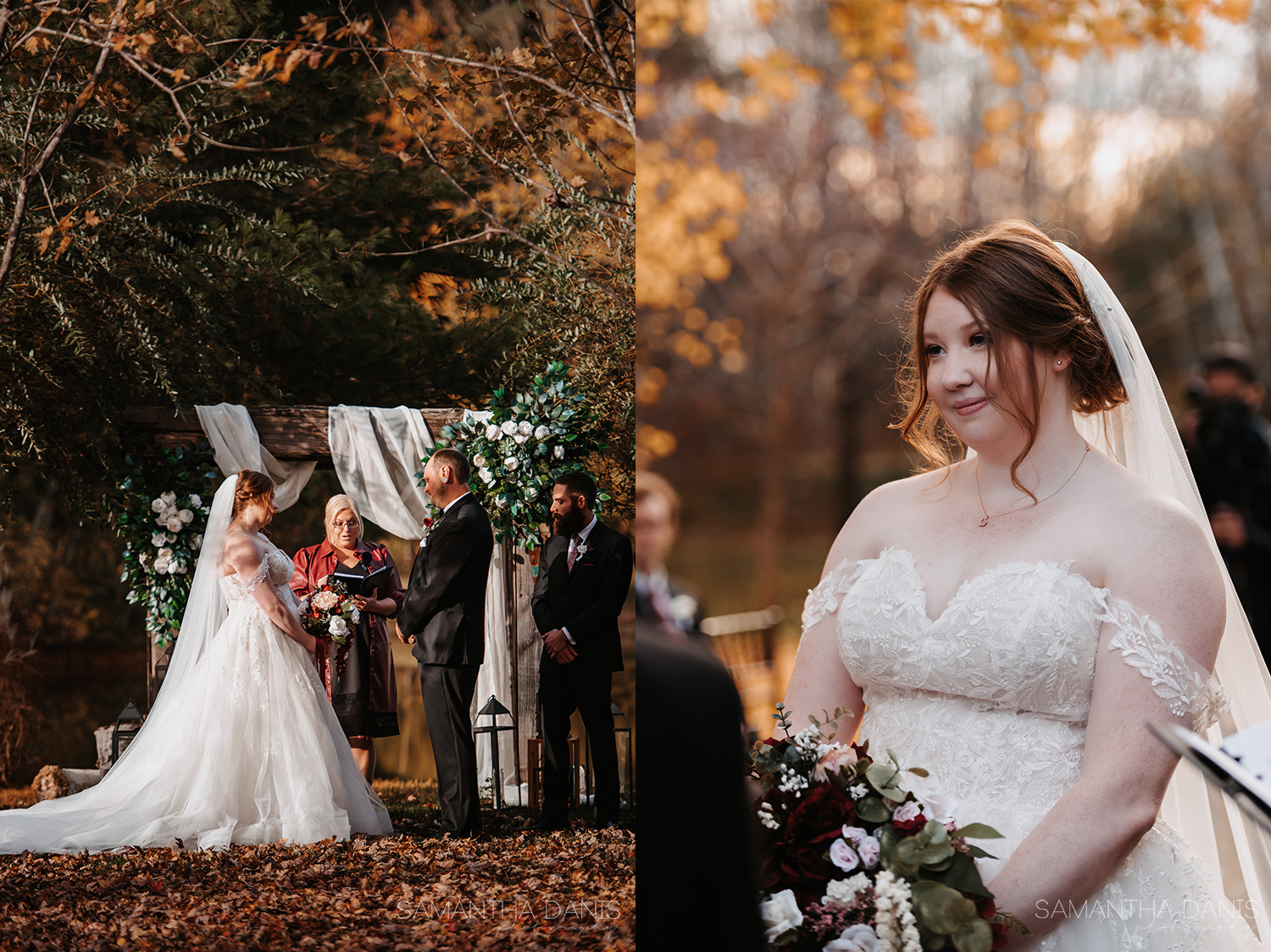 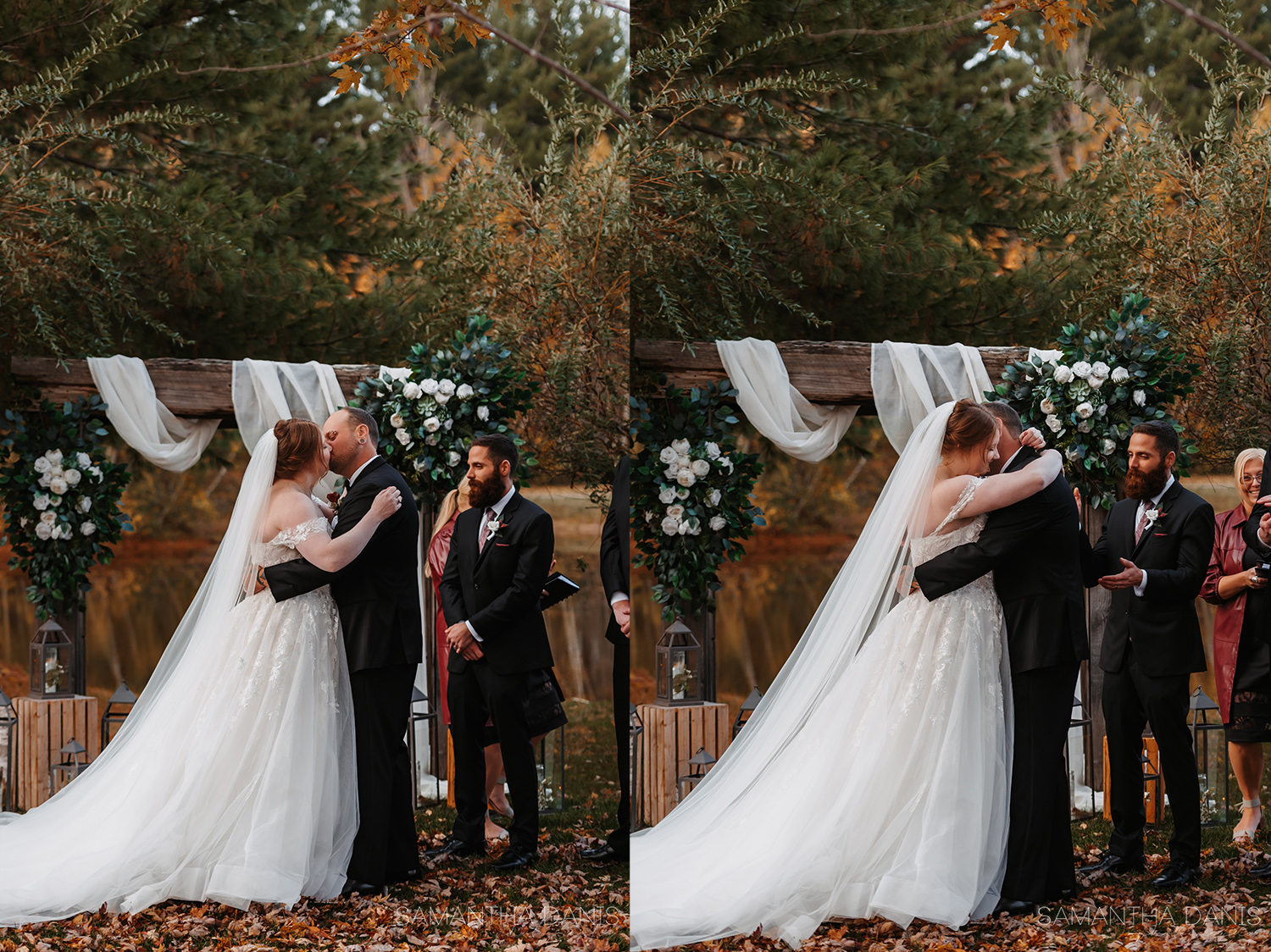 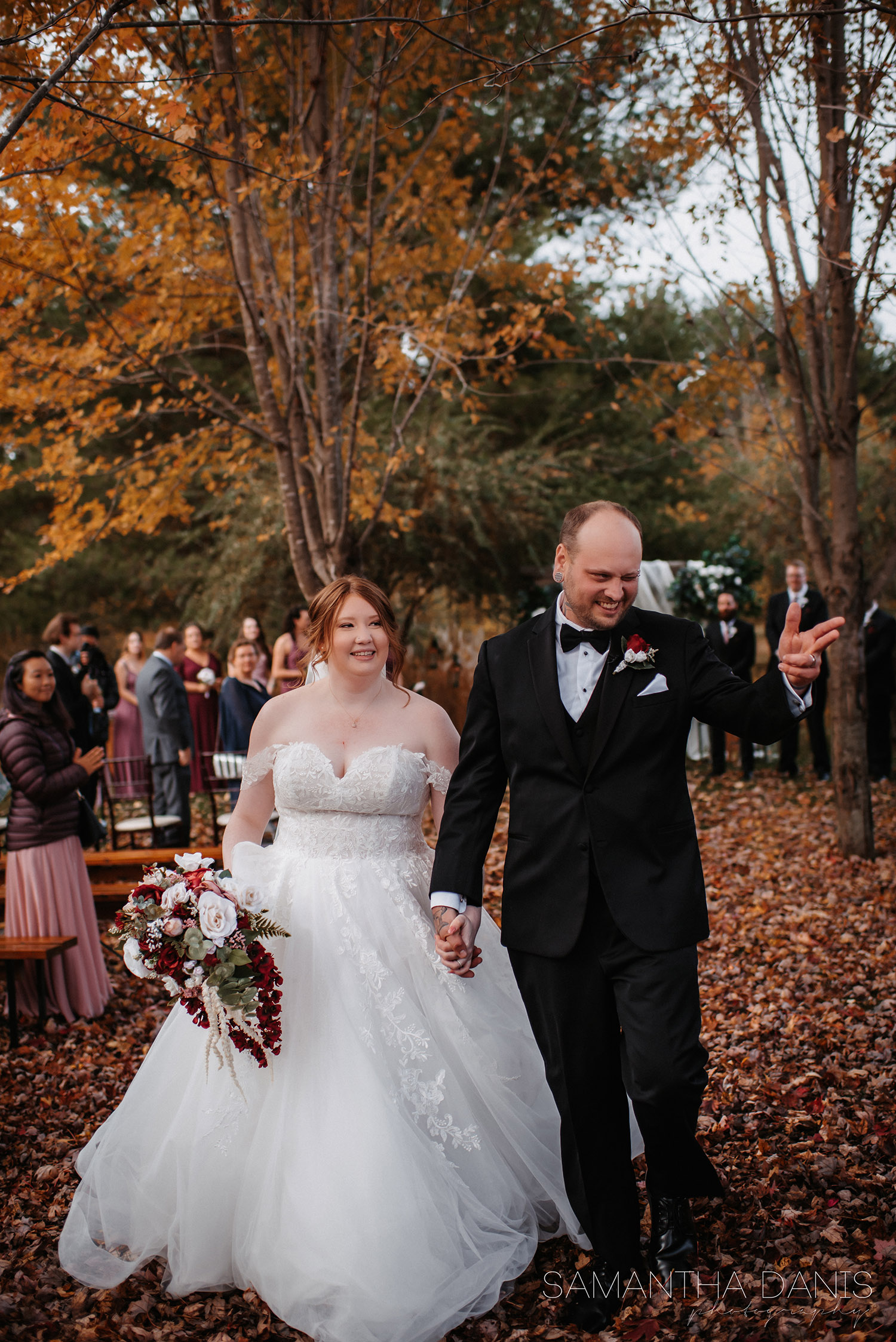 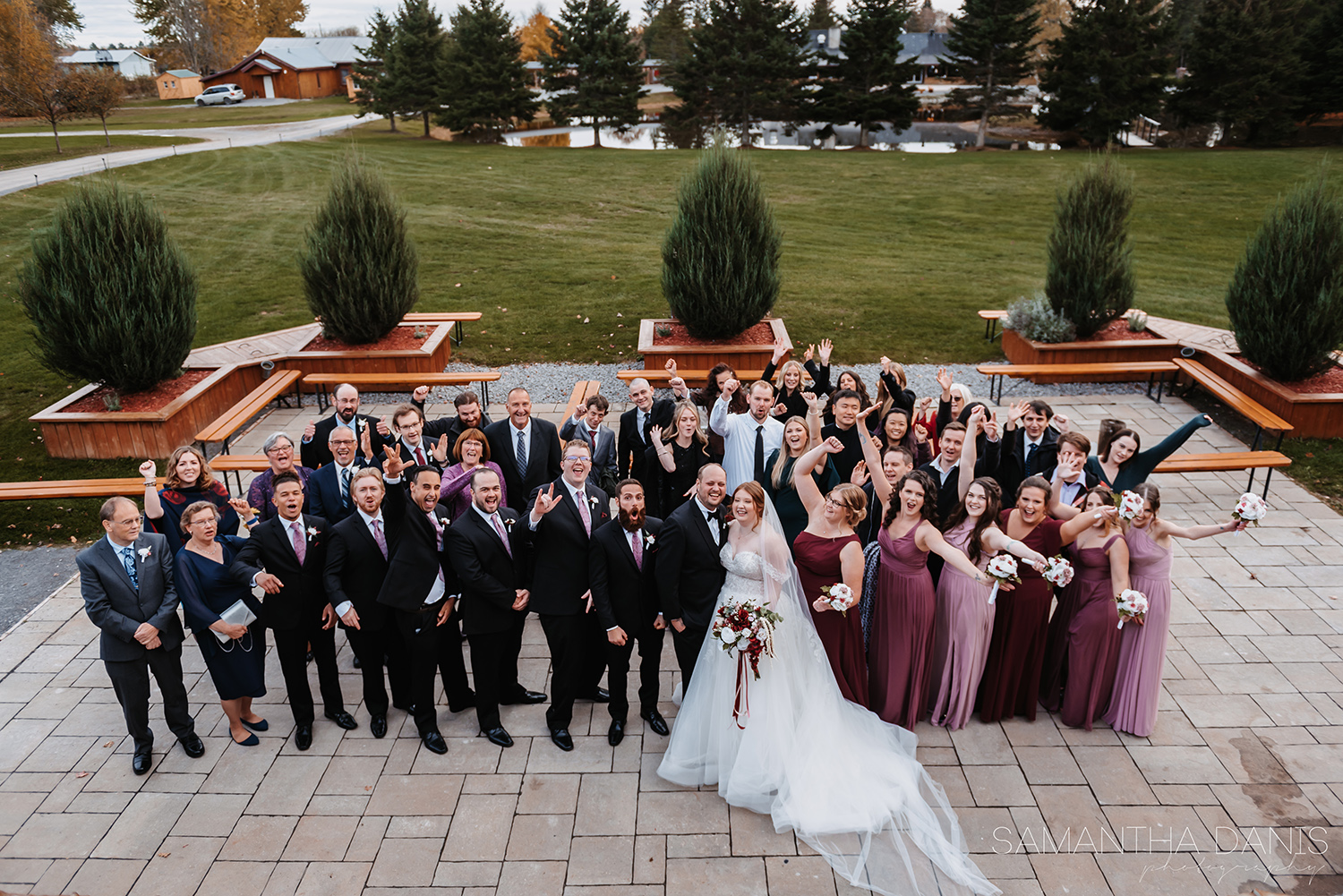 We proceeded to spend the next little while spending time with their family and friends before jumping in to some more portraits. Luckily for us, the day kept up it’s beautiful light until the very end. Family and friends happily lined up for photos with the happy couple and then I stole them for a few more bride and groom portraits before settling in for the remainder of cocktail. Because the sun was setting and things were getting a little chilly, cocktail was held in the second smaller building, or the Chapel, on Beantowns property. Guests had their own plate of munchies and access to a bar while they mingled at their tables with Erica and Eric making the rounds. 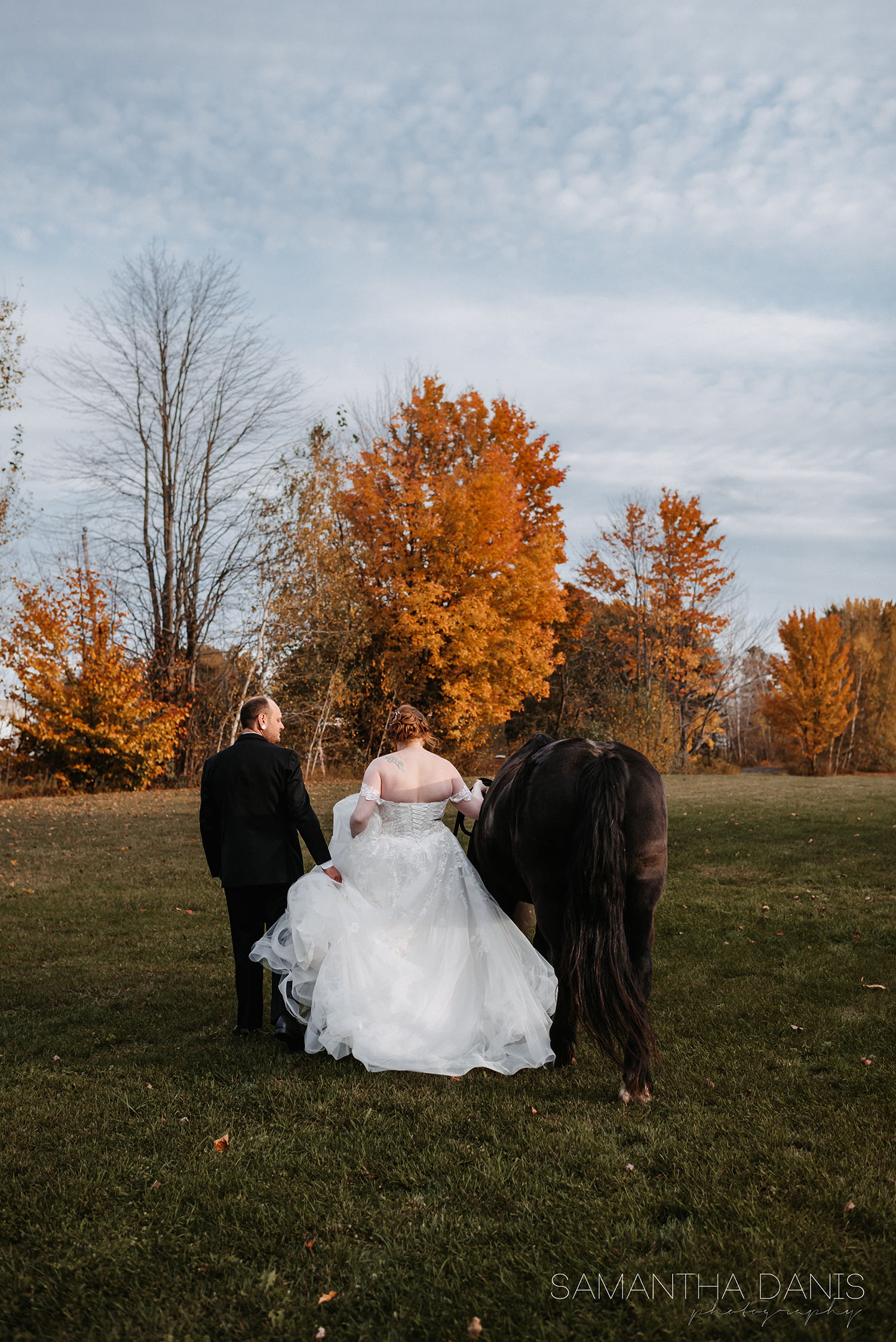 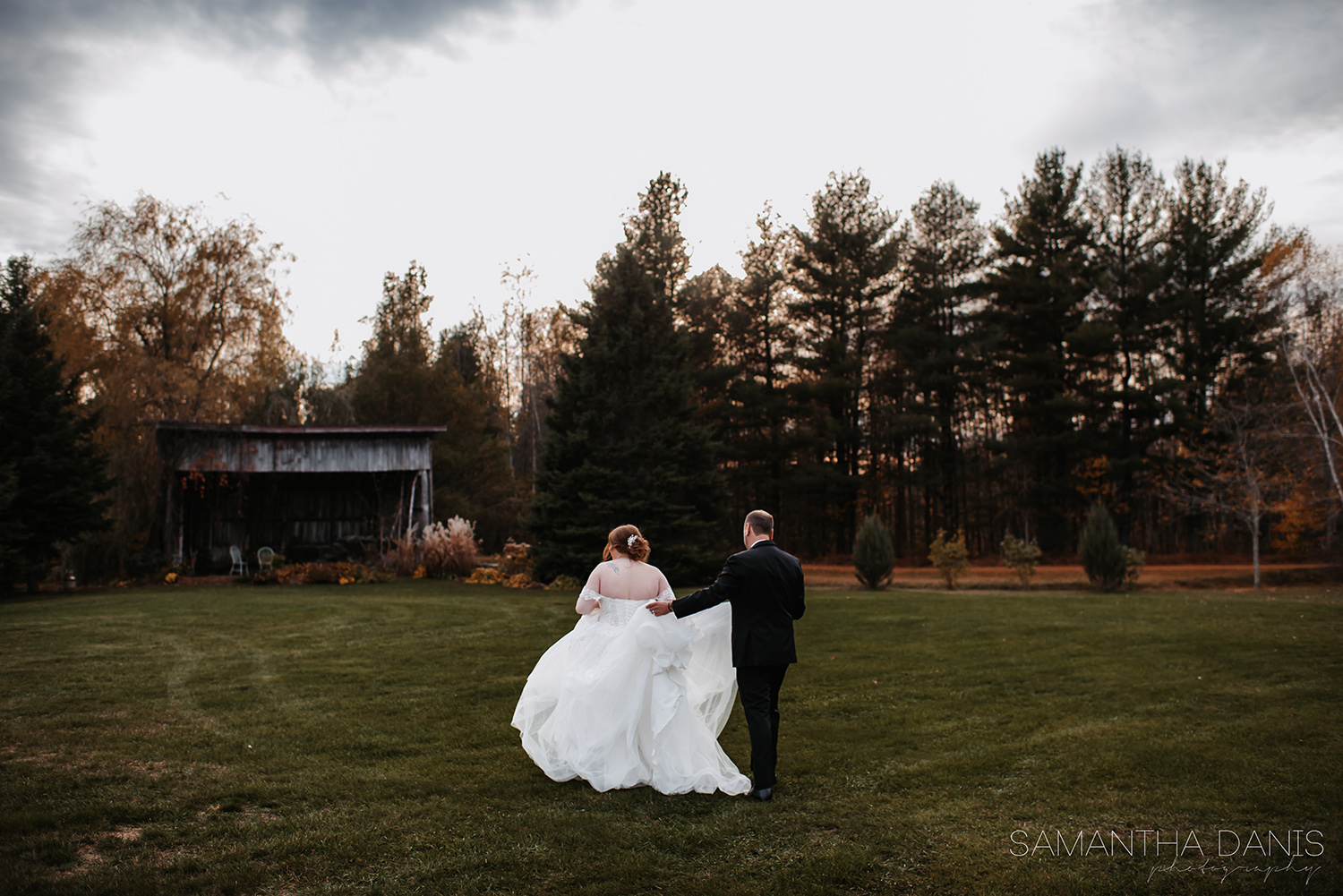 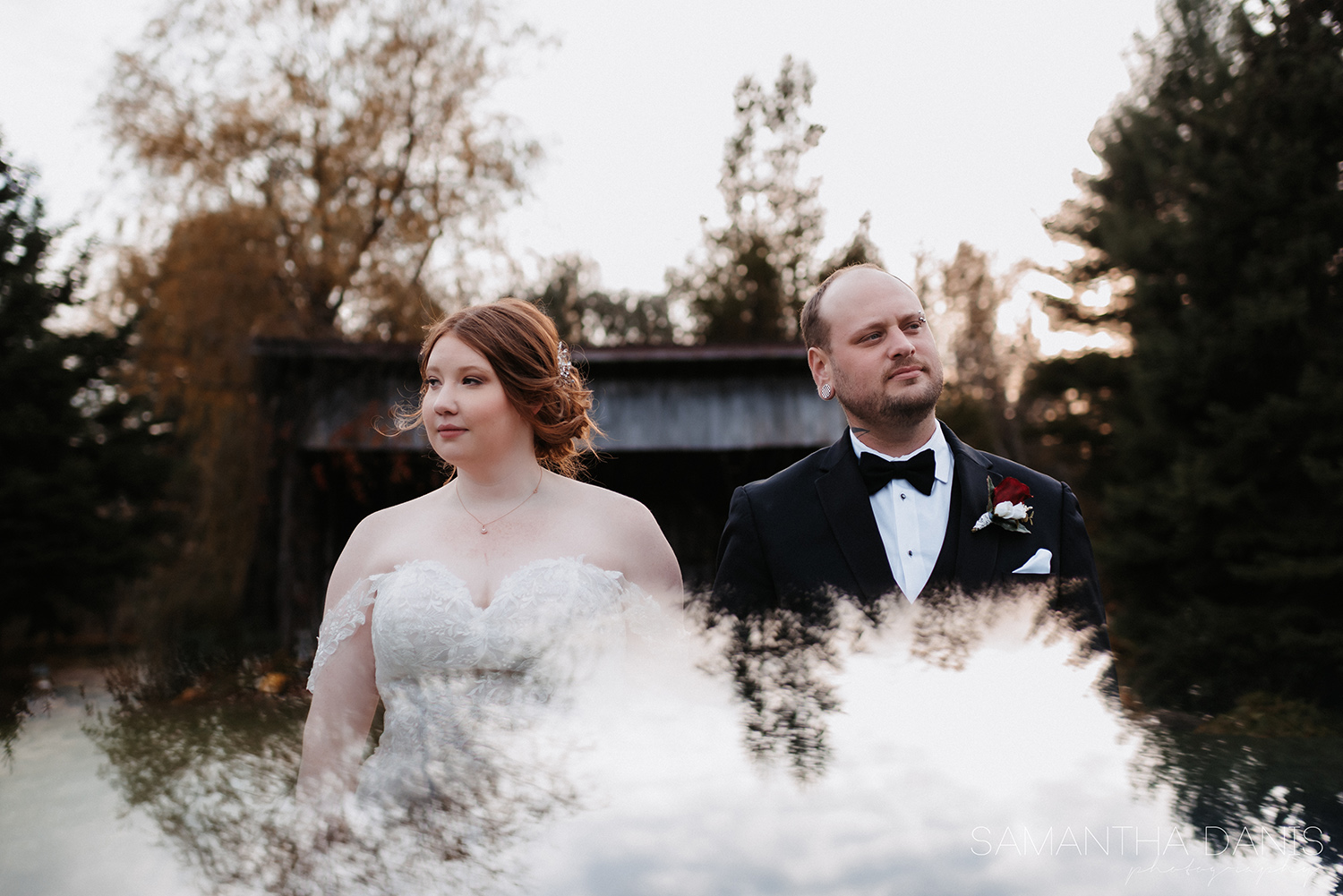 When it was almost time for dinner, I made my way over to the main hall only to see the sky was ablaze with purple, pinks and orange light. It was honestly the most beautiful sunset I think I have ever seen in my career. So when Erica and Eric walked out we were like AHHHHHH LOOK AT THE LIGHT AND SKY. And basically all freaked out as I place the happy couple to try and get a few shots in before the sun dipped further and we would be too late. Lucky for me, we got some pretty amazing shots. Even luckier yet for Erica and Eric! 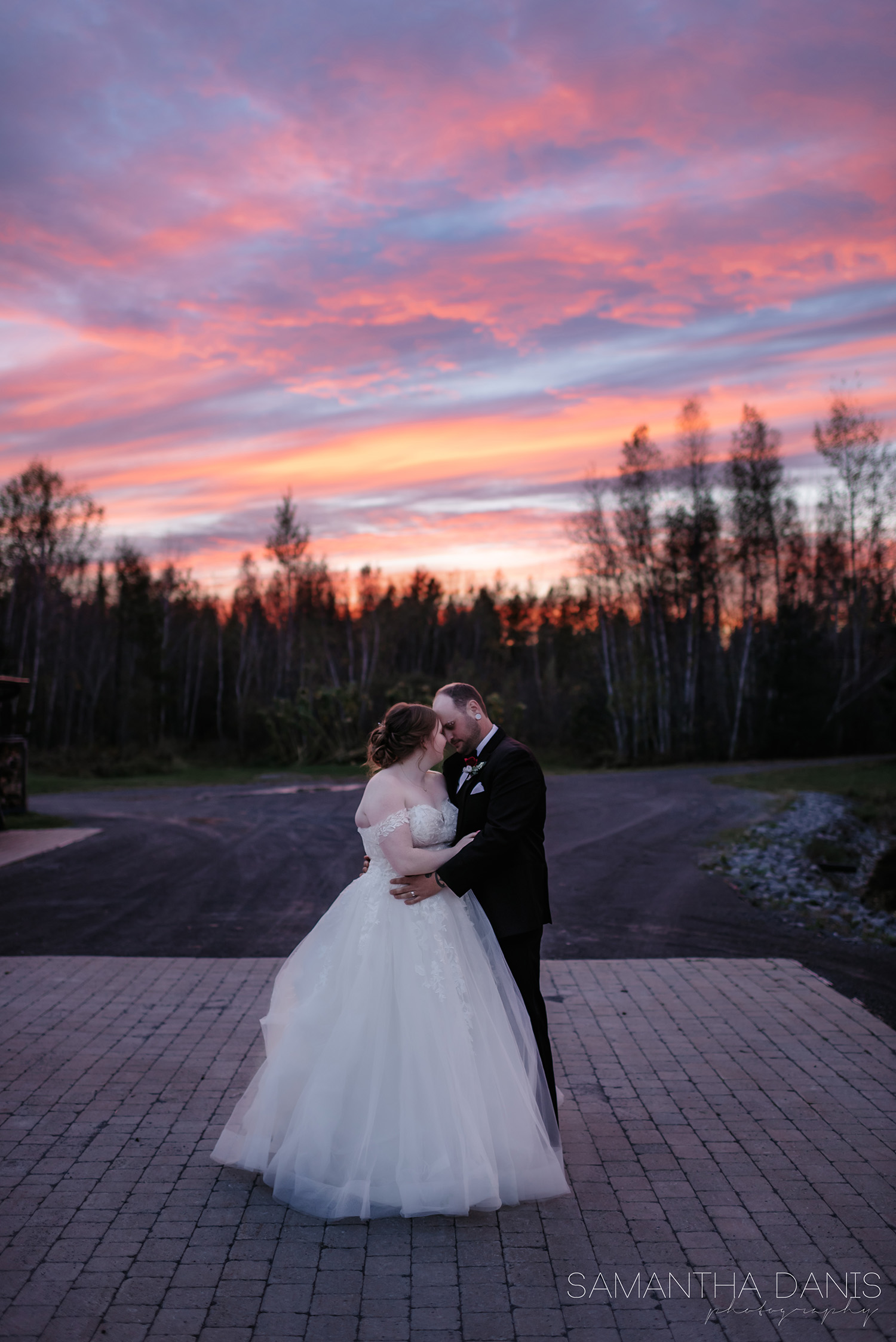 The reception was fabulous as always. Beantown is always so great with their day of coordination and their yummy yummy food. The guests were treated to speeches and stories that made everyone laugh, a lot. Every time I looked around me, someone new was breaking into a smile or bursting out in laughter including Erica and Eric. As quickly as dinner came to be, it was time to get the party started and what a better way to start than with a first dance, on your own private island, with fireworks. That’s how you start a party with a bang. The happy couple danced in the cold hair to John Mayer’s version of XO which I absolutely loved. Of course I was running around making sure I got the elaborate fireworks shot but I swayed along to the music and admired the love that was surrounding me. 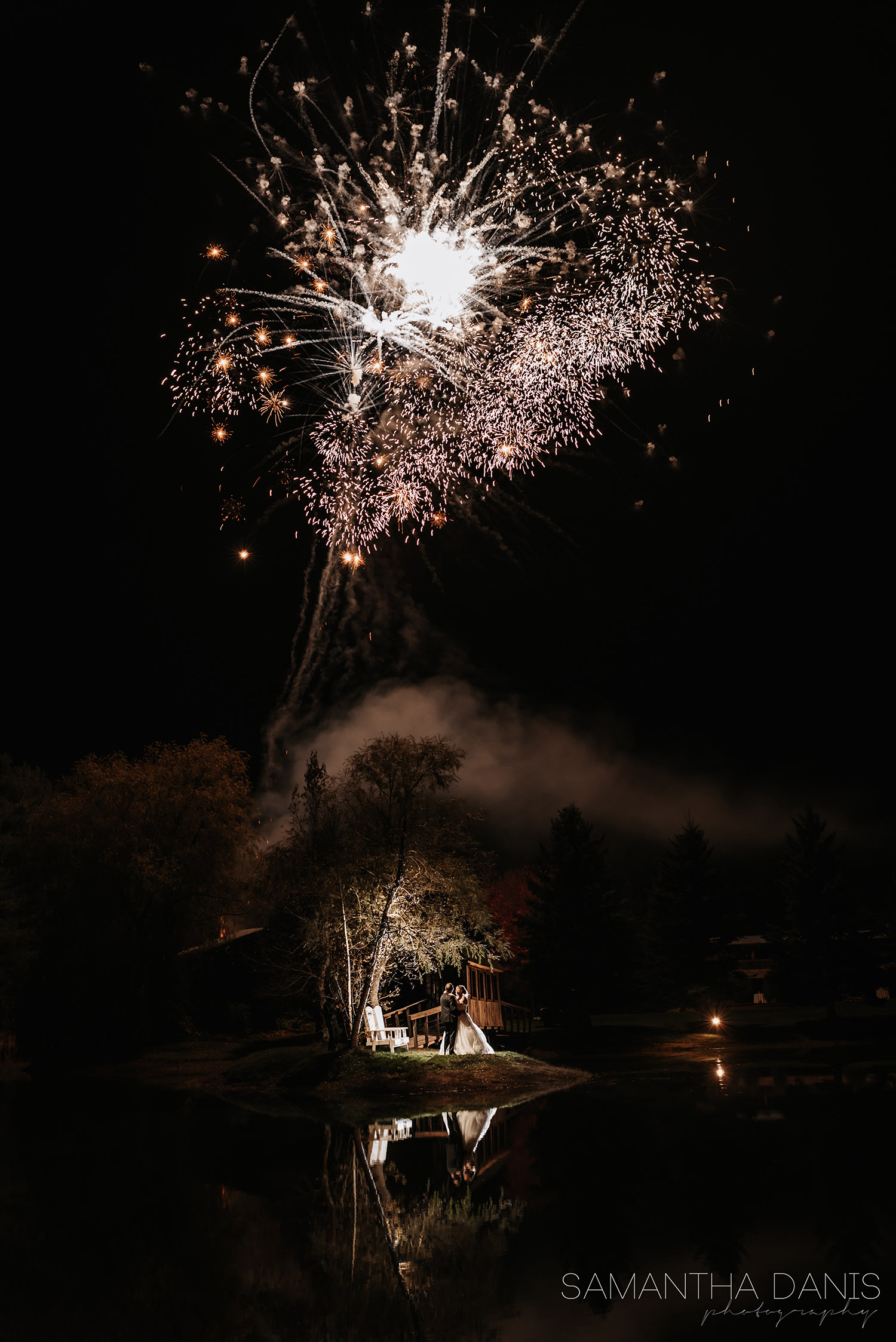 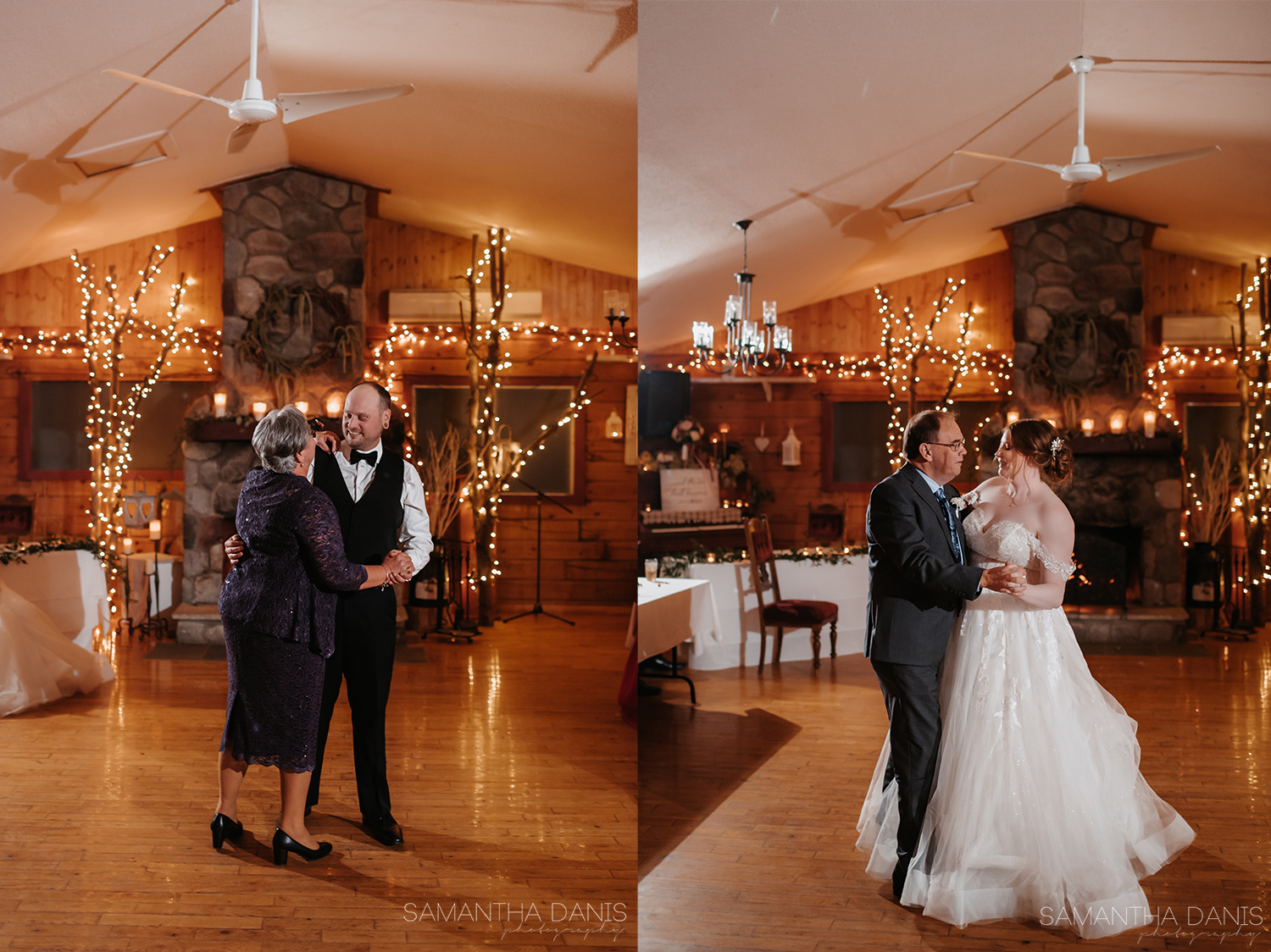 The rest of the night was spent on the dancefloor. But literally, Erica made it a goal to spend the whole night dancing because she COULD! Covid restrictions finally permitted dancing at venues and hell be damned if she wasn’t going to take advantage of it. I didn’t quite know this about Erica and Eric but they’re taste in music is very rock-punk rock-emo-loving if I could describe it. I’m sure they like other music too but this is the vibe I got and Erica and I talked about My Chemical Romance during the day so that’s actually how I ended my name. By dancing, with her and her friends to the Black Parade and my dark little emo heart was so very very happy. 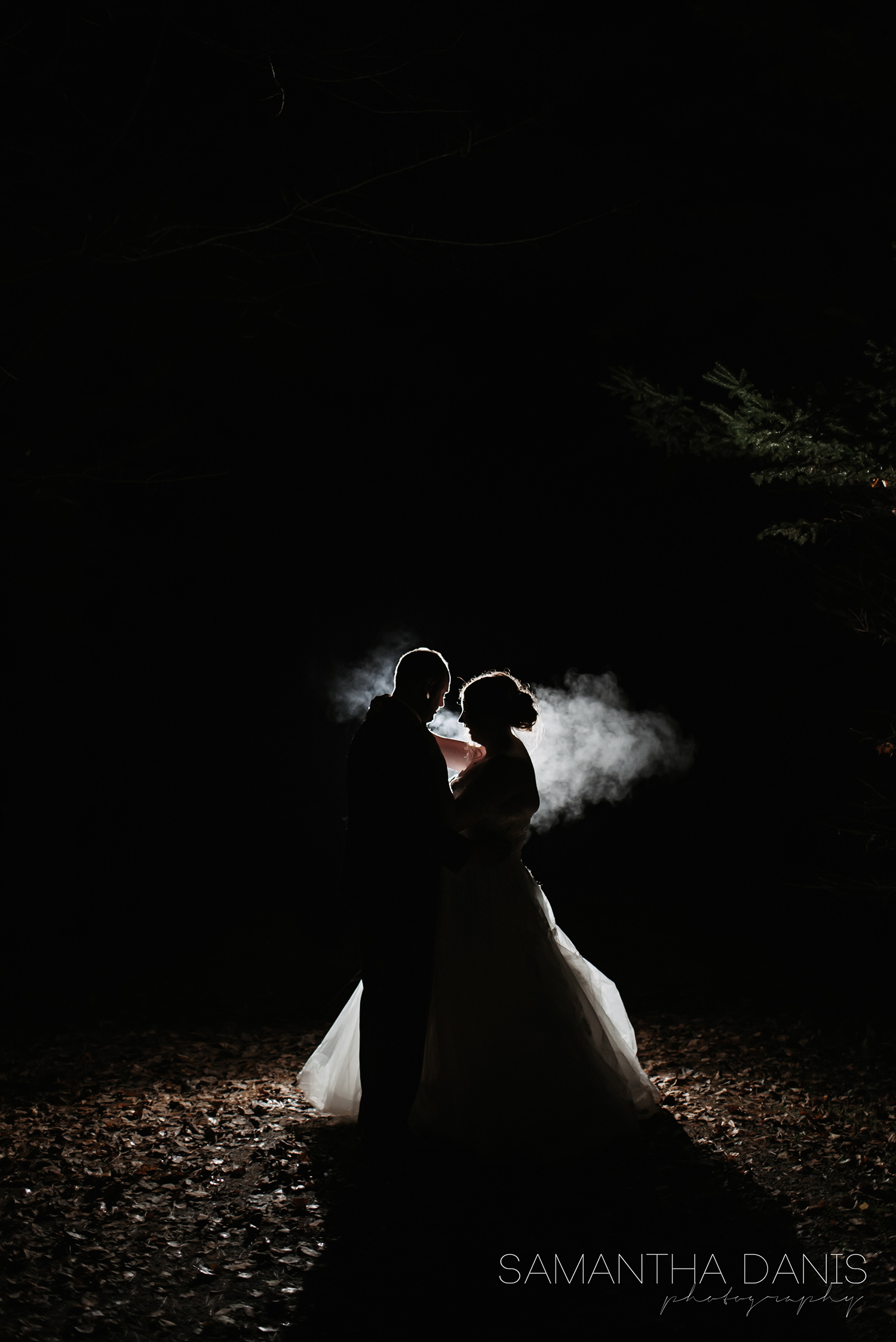 Erica and Eric, you rock stars you. I’m seriously so happy to have crossed paths with you and to have been able to celebrate this milestone in your relationship. You are both truly wonderful human beings and I can’t wait to see where life takes you. Love you both dearly xox