I love smaller intimate weddings, I also love day time weddings which is exactly what Cynthia and Frank had in mind. Now I rarely book clients without meeting them first but Cynthia was so excited to book me that I couldn’t say no. She sounded like the sweetest person ever and I was not wrong on that one. When she told me they were having their wedding at the Wakefield Mill I was even more stoked to be able to photograph this for them. I arrived at the mill Saturday morning only to find that the ceremony location had been switched to indoors. Now the morning had been on and off rain but by the time I got there is was very light drizzle. Cynthia flagged me down from inside her room with some concerns so I opted to head up to see if I could help. I reassured her that her makeup looked great, and that if she wanted her ceremony outside that we should do it! She was so concerned with making everyone switch things around but girl it’s your wedding, we will do what needs to be done, and so it was. With it being a smaller wedding (20 or so guests) it really took no time at all to move the chairs and decor out to the beautiful ceremony space. Cynthia received a phone call that her parents had to take a detour because of road closures and that they hadn’t arrived yet which certainly did not help with the stress. Her sister and I reassured her and we took some fun photos to help alleviate all that stress. After all was said and done, everyone had arrived safely, the rain had stopped, Cynthia was dressed and looked amazing and it was time to get her down to Frank to get married.

The space was lovely and lush with greenery. Beautiful rustic decor at the end of the aisle and white chairs for guests to be seated. Frank walked down with his mom, full of smiles and jokes of course. Follow by Jennifer, Cynthia’s sister in her beautiful royal blue dress and then of course our stunning bride herself with her dad. She too was all smiles mixed in with some nerves I think. Frank waited for her at the end of the aisle originally making funny faces but quickly changing them to smiles as he saw her walk down. The entire ceremony was absolutely beautiful and very personal. Officiated by the always wonderful Lynne from Exceptional Ceremonies, their personal stories, how they met and personal vows were all things I would remember. Here is their story:

Just under 10 years ago they began their journey together.  During these years they shared many life experiences, their love deepened, they loved unconditionally, and they also developed a reassuring strength in one another’s arms. And this is how it all started…….

Cynthia had been single for some time and a friend of hers at work had finally convinced her to give e-Harmony a try.  After a lot of hesitation, Cynthia agreed to give it the minimum one-month subscription for 50ish dollars just to appease her friend and to “check it out!”  After completing what seemed to be a full psychological assessment of approximately 800 questions she was “matched” with Frank. Well, it worked as both very quickly realized that they shared similar disappointments and heartbreak in their previous relationships…Both scorned, but cautiously eager and excited to learn more about the other. Cynthia admits that she still has all their initial email exchanges, the ones that helped them to get to know each other better. During these exchanges, they both realized quickly that they had too many things in common to ignore. Both their parents were involved with education in some way. Cynthia’s parents both held careers with a school board, and both Frank’s parents were teachers.  They both lived in Orleans within 5 kms from each other, drove black two-door cars, both their dads are called Raymond, they both admitted to still having their childhood teddy bears (Cynthia’s Raccoon and Frank’s Léo Paul).  Both owned and loved a cat (Cynthia may have had more than one)…etc. They each had a friend in common.  That same friend who had convinced her to give e-Harmony a try, was good friends with one of Frank’s and this friend of Frank’s assured her that he was a great guy.

So…. That first date was on … Cynthia and Frank met in person on the infamous day of  (10-10-10). After their evening and once home, they texted each other and they both admitted that neither wanted the date to end, so Frank jumped into his car and the date continued.He would then meet her, a few afternoons a week when she got off the bus with Tim’s. On one afternoon Frank had asked her for her apartment key.  He mentioned that he wanted to make her dinner the following day and he wanted it to be ready when she got home. After that delicious meal she never did get her key back. There were two dozen blue roses in a vase he had placed on the counter for her. Even though things progressed a lot quicker than she had anticipated or was prepared for, she always felt a sense of comfort and safety regardless of having previously sworn off men.  She sensed that he was a genuine, kind-hearted, and caring man.  He had a cat, blue roses, and brought her coffee.

They’ve since bought and made a home together, they’ve traveled, they’ve developed illnesses and joked with each other that they both enjoy naps and long nights at the E.R. They’ve laughed a lot, cried sometimes, have gotten angry with each other, and so on, but their commitment to each other and to their relationship was never doubted. Through the most difficult of times, they always knew, believe and had faith that no matter how challenging things got, they always knew that neither one would turn away.  It was that comforting trust knowing this that brought them here today.

How cute it that story?!? I loved getting to know them this way and it just made everything so much more personal and dream like. They then read their personal vows and those had everyone laughing. I think what stood out to me the most was that Frank should not be surprised and would accept if Cynthia came home from a trip to Pet Smart with a new cat. It sounds like something I would do so I was definitely all aboard for it haha. After many more laughs and a few tears, they were FINALLY pronounced husband and wife and shared the sweetest kiss. 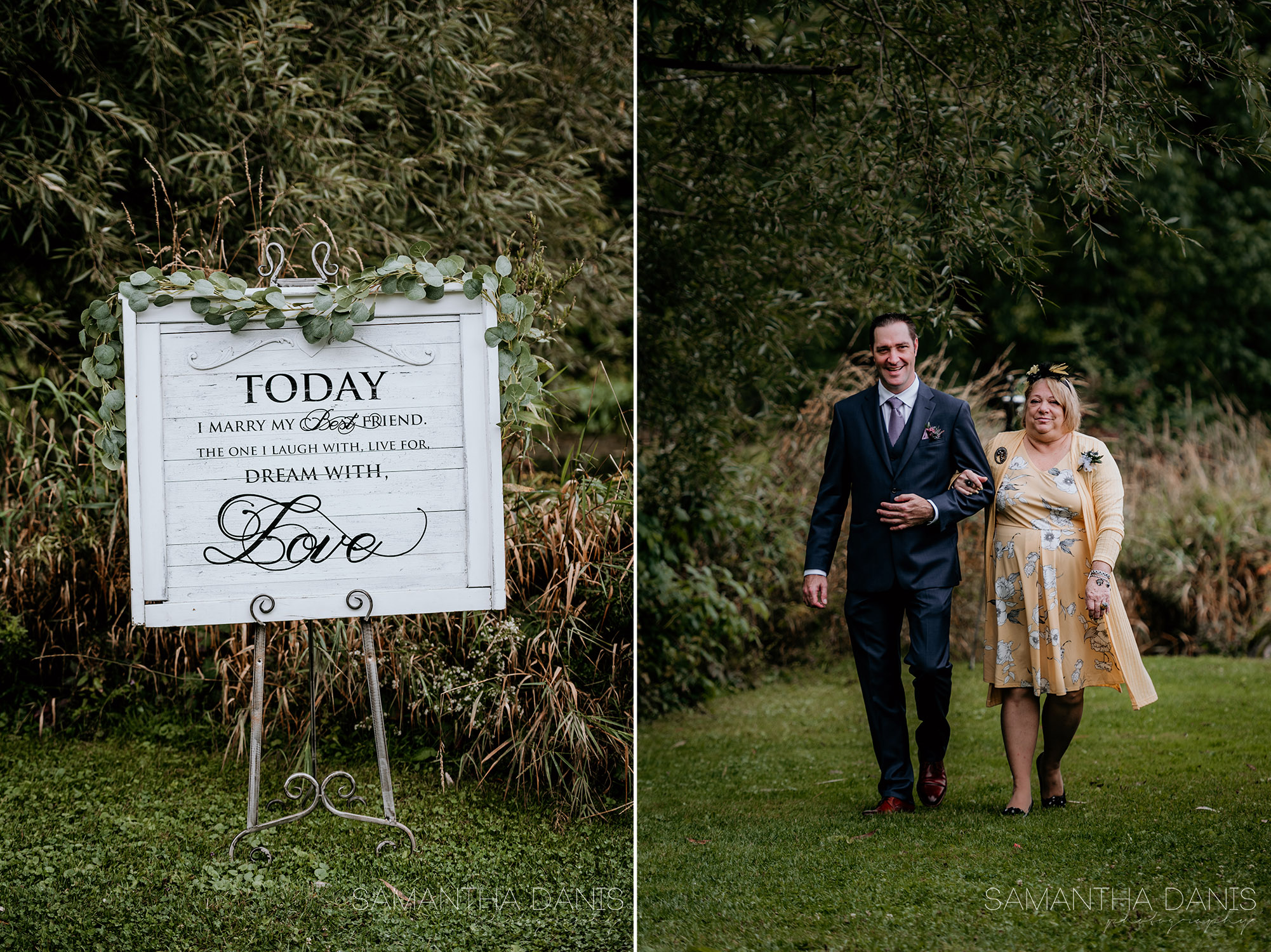 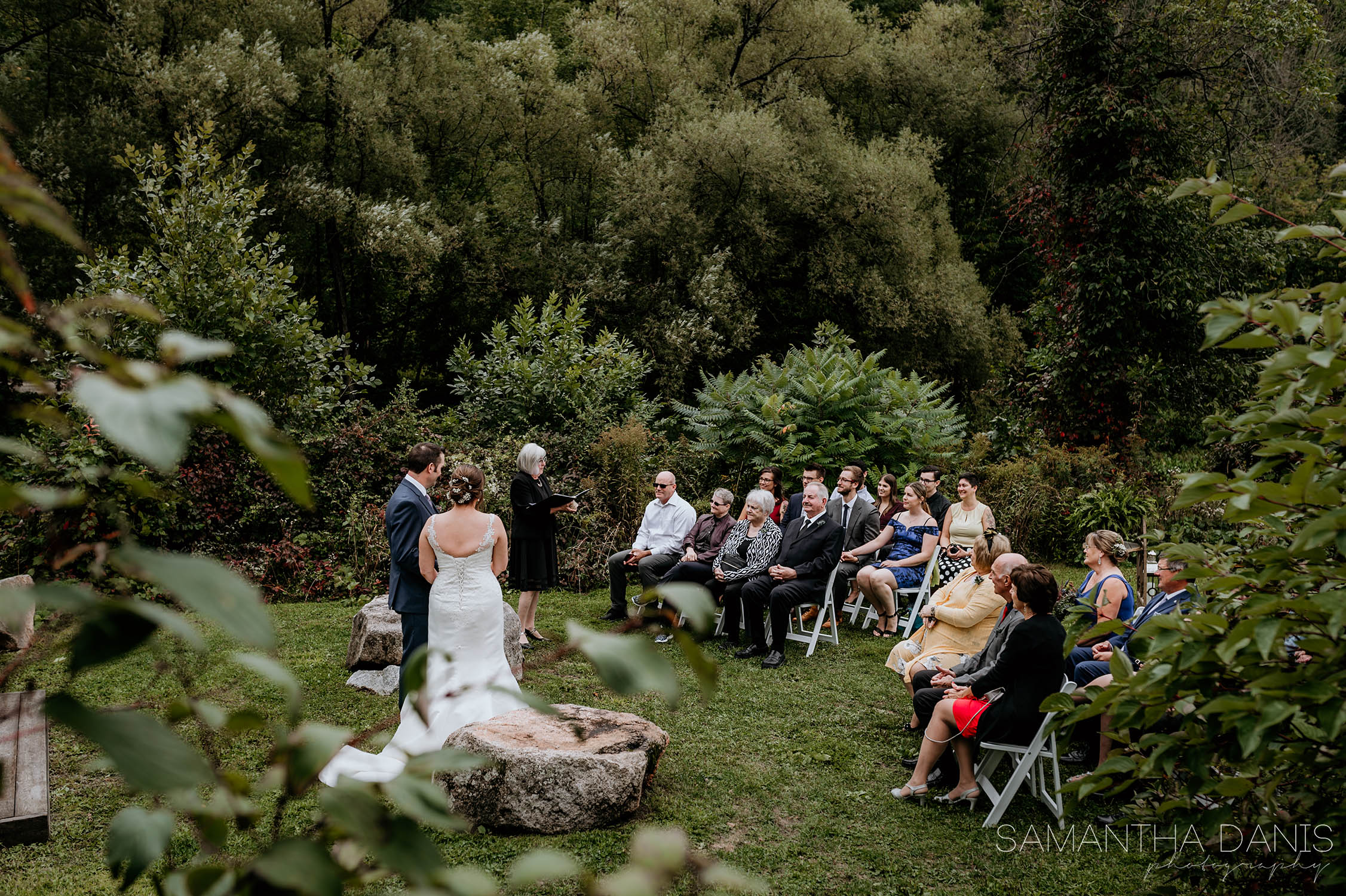 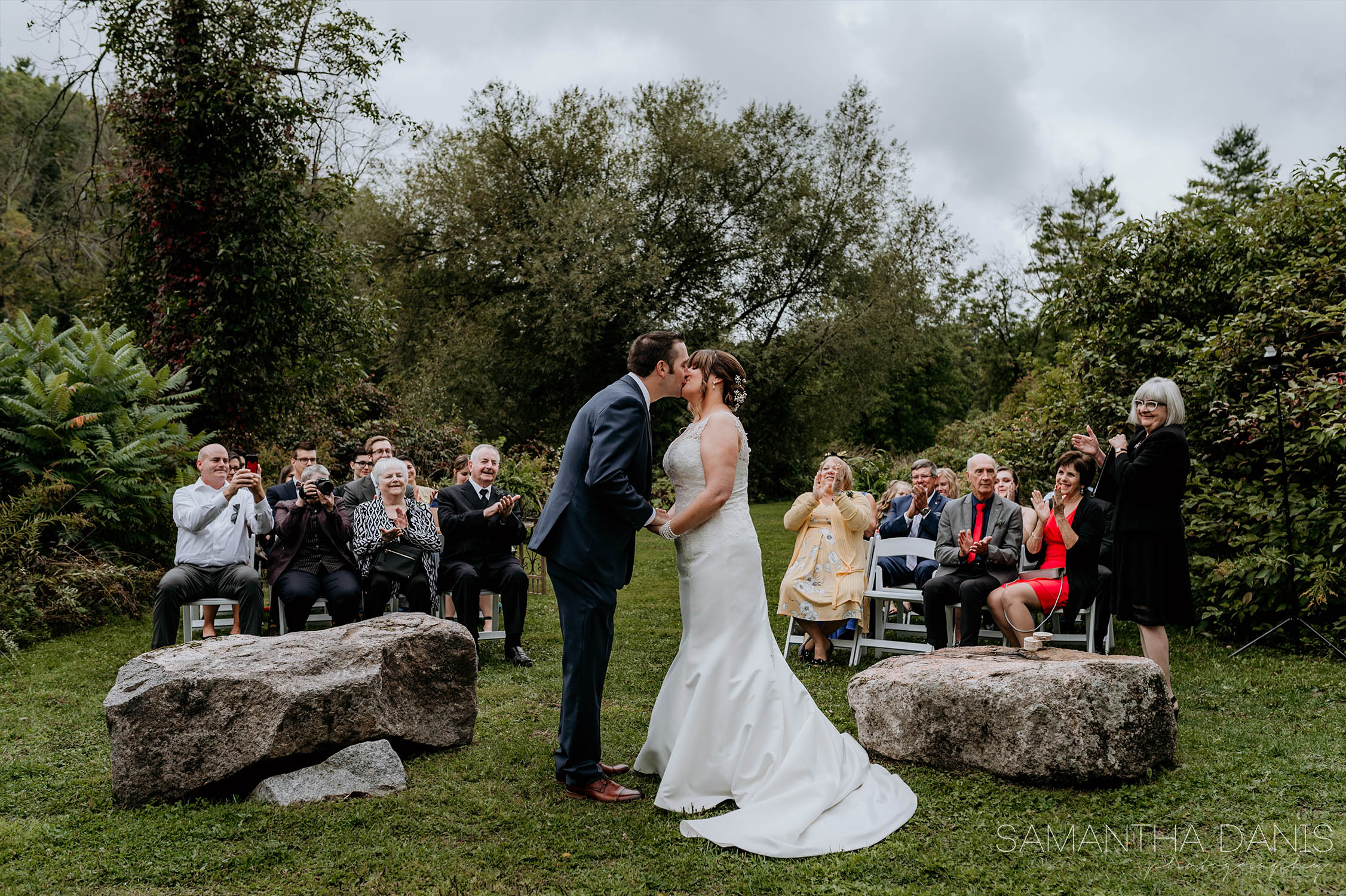 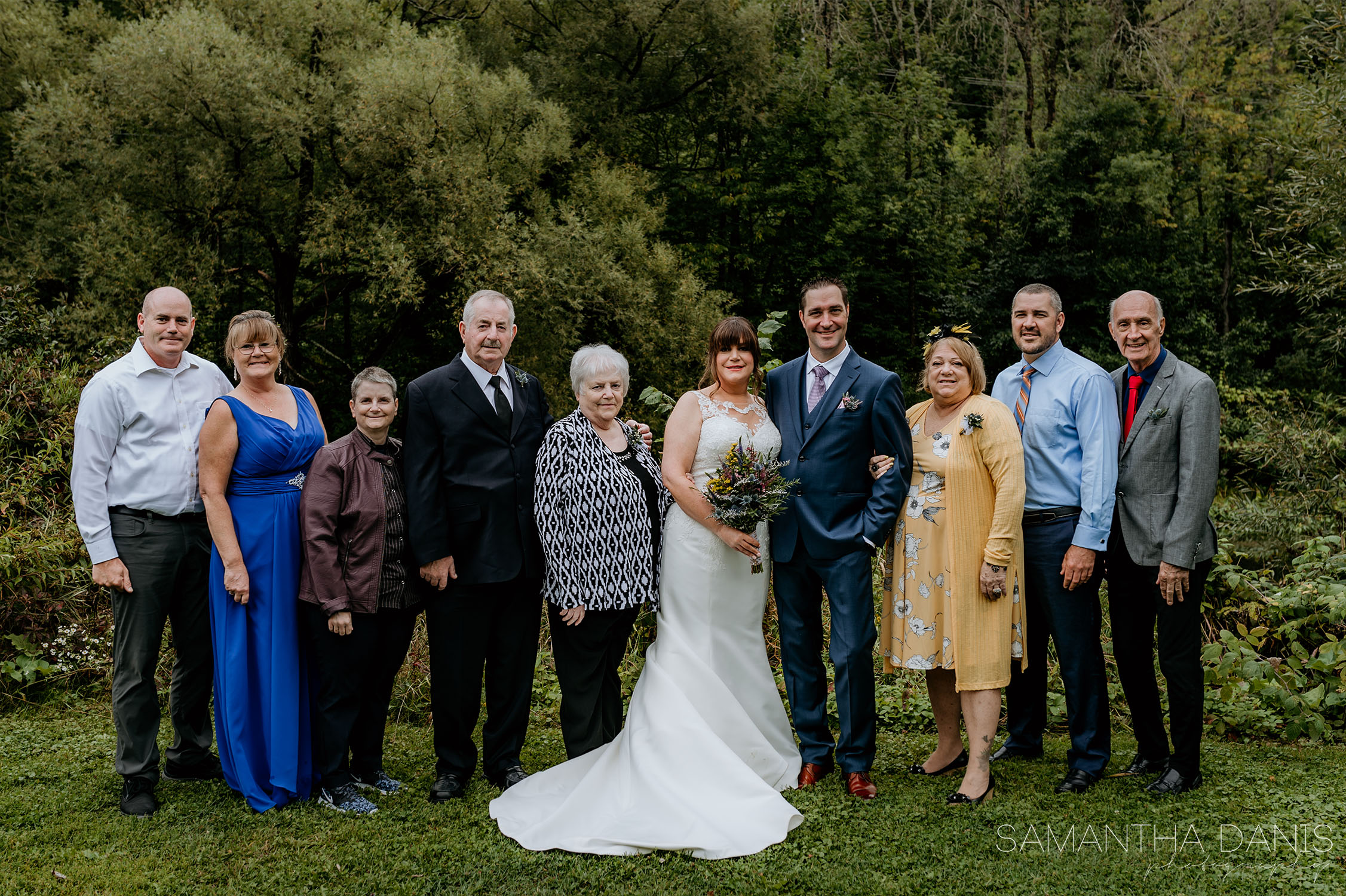 During portraits we walked around the beautiful Wakefield Mill’s property and chased whatever light we could find. Luckily for us, the mill has many little spots and I don’t think we even explored half of them in our short time together. Spending those 45mins with Cynthia and Frank really allowed me to get to know them better. They are really similar to me and my boyfriend, it was almost like a mirror. Cynthia is a kind gentle soul who loves LOVES animals. Like to the point that she’s made Frank stop in the road to allow turtles to cross. Actually when they walked down the aisle together after the ceremony there was a little baby snapping turtle in their path so they stopped and I moved off to the side. And then during portraits we found two more babies and made sure no one hurt them. Frank likes video games and has quite the sense of humour, they really are an adorable match. I also realized they both have quite the sense of humour. I could literally tell them the smallest thing and they would turn it into a joke, we seriously had a blast. Cynthia had mentioned how she really enjoyed my night photos but with it being mid day I wasn’t sure how I could create something similar for her. I found a nice dark-ish spot in the woods and got to work. I can only hope that it turned out as good as she has hoped! 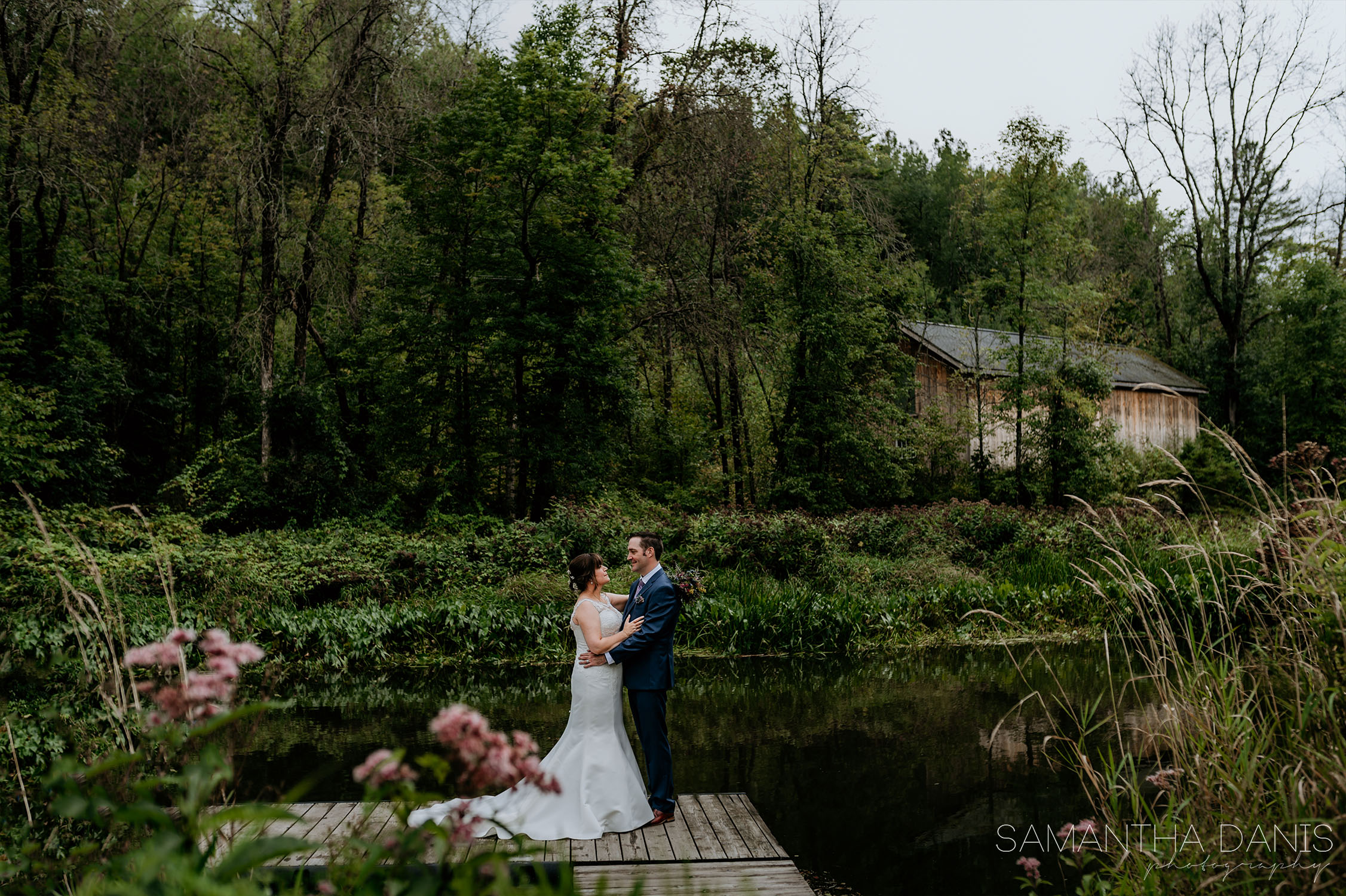 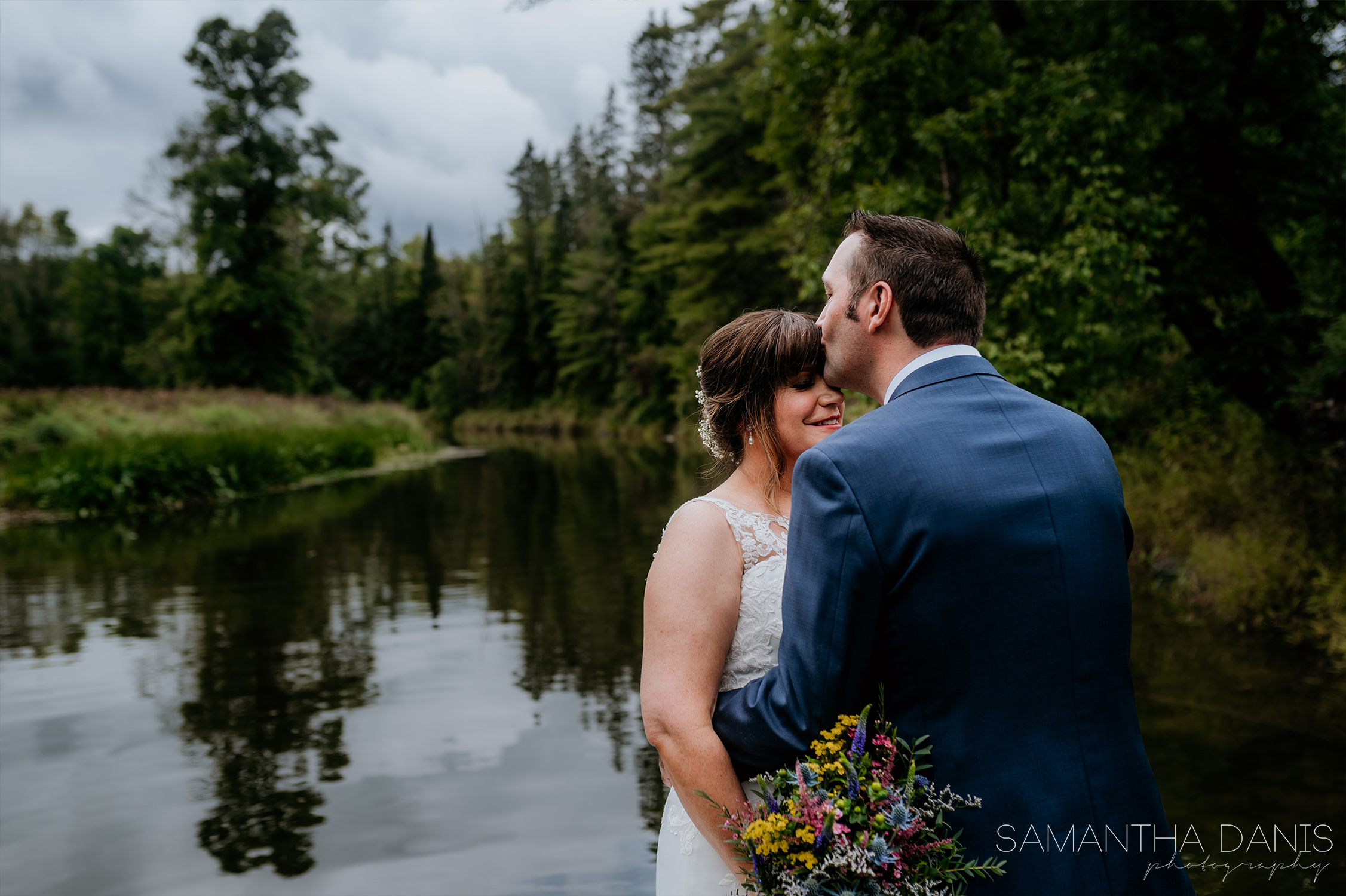 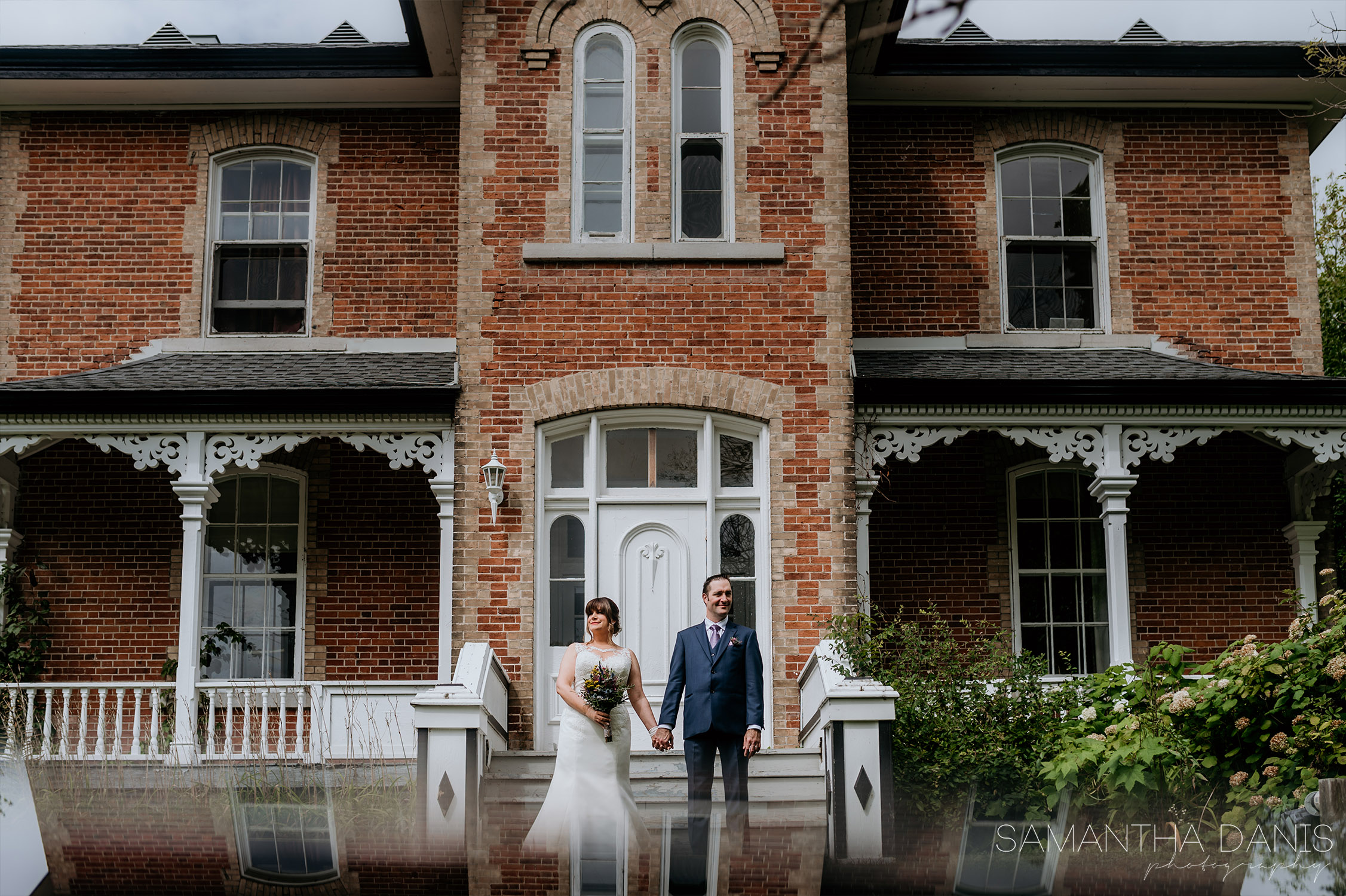 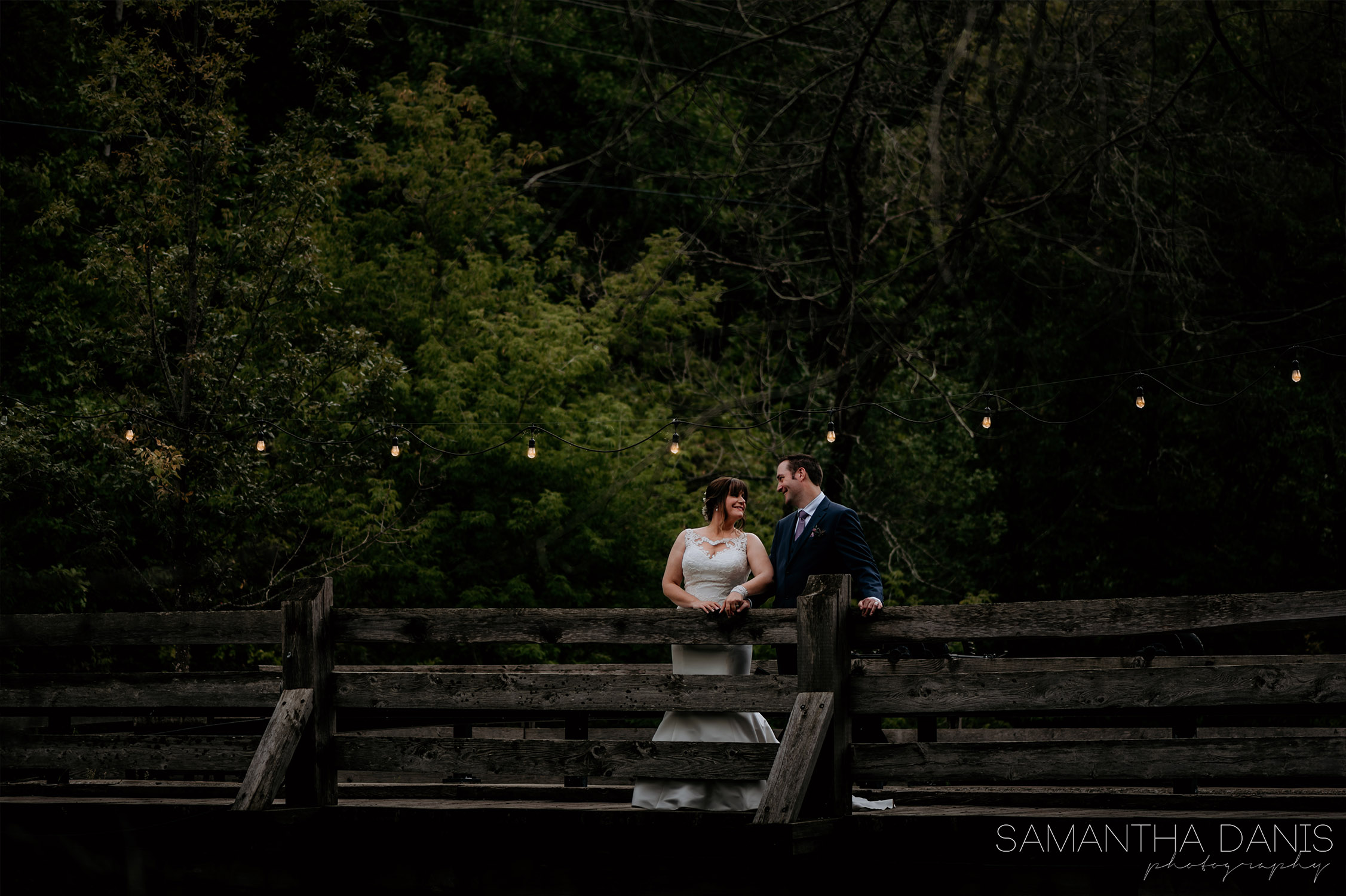 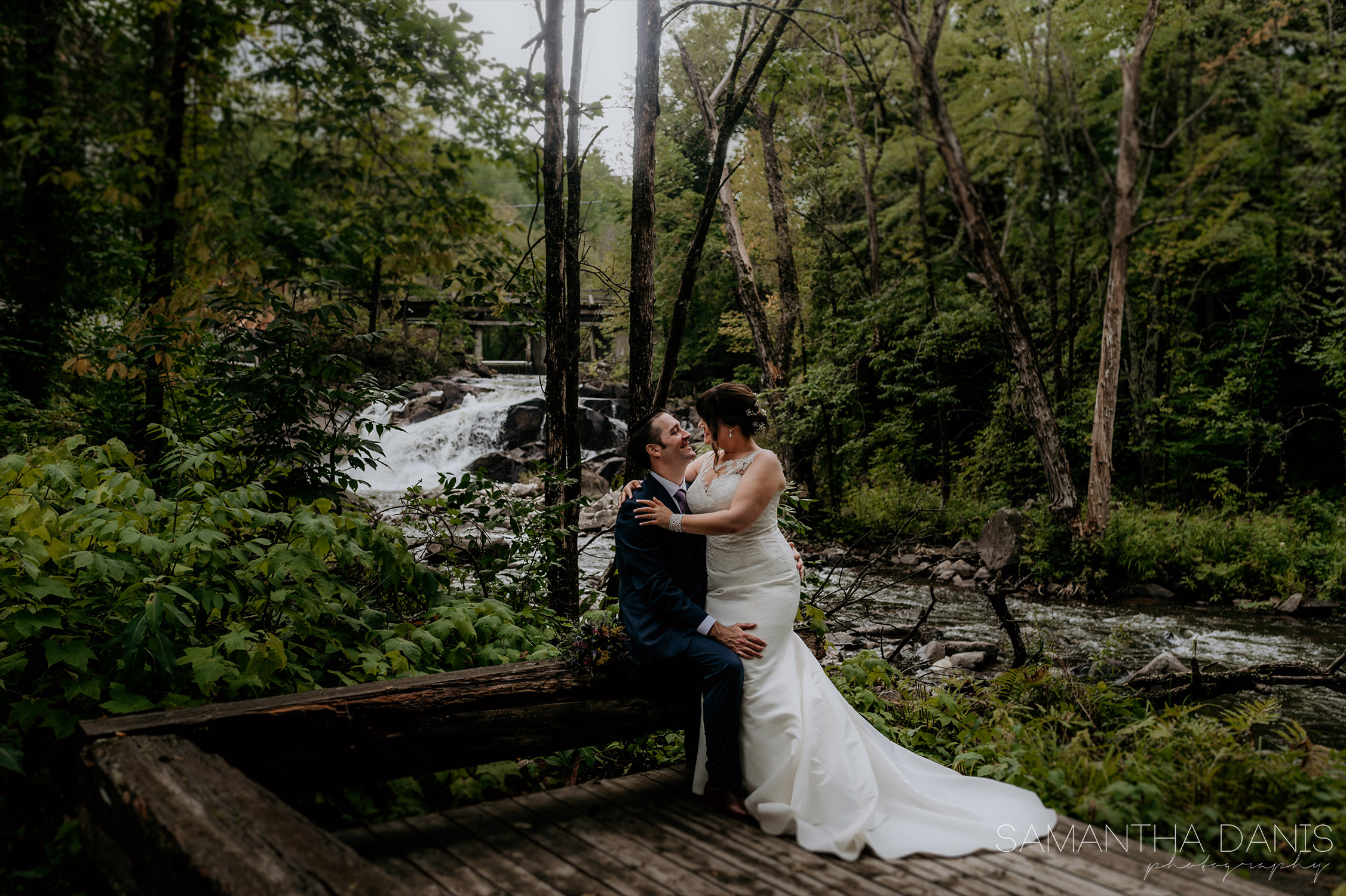 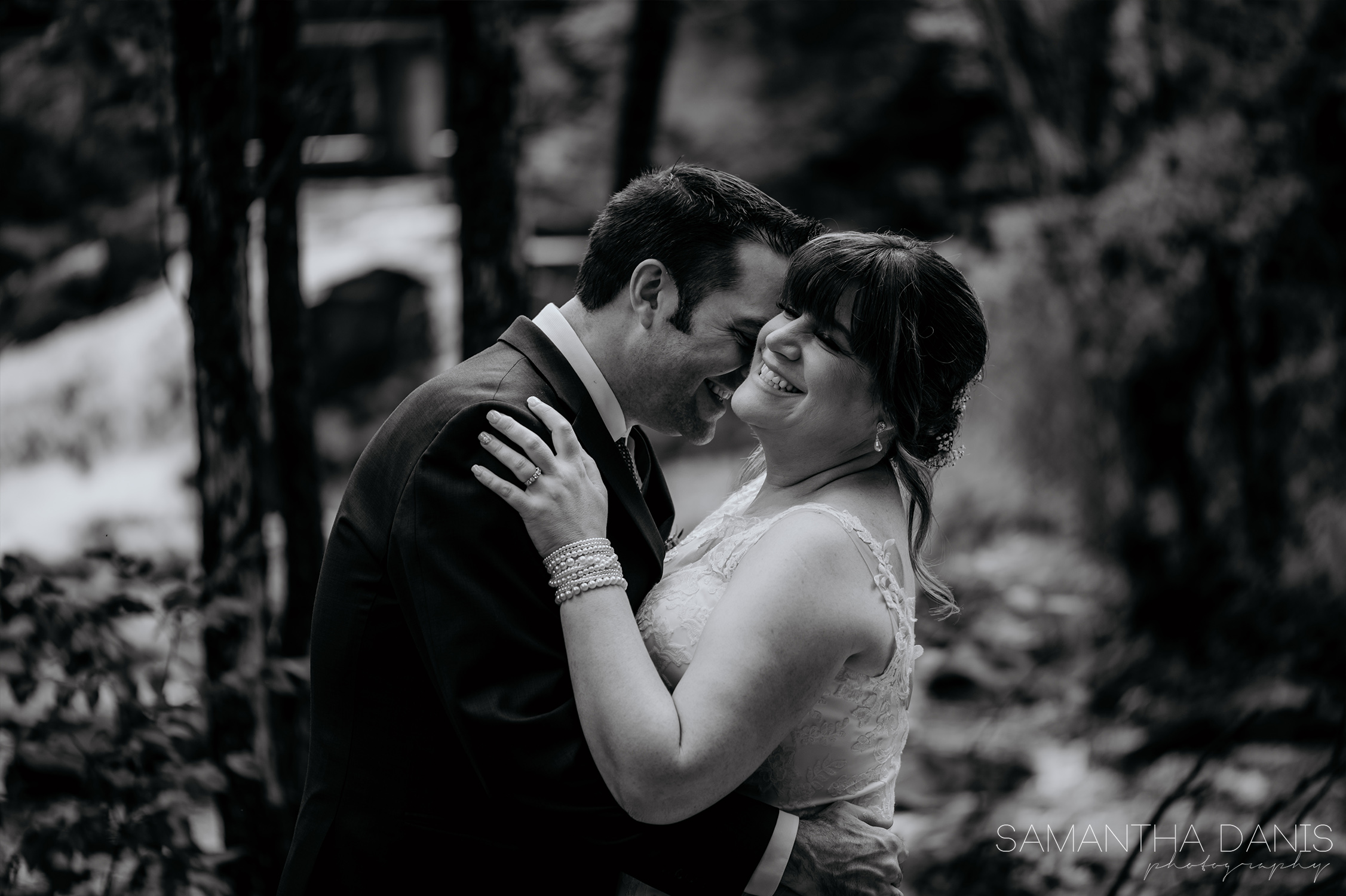 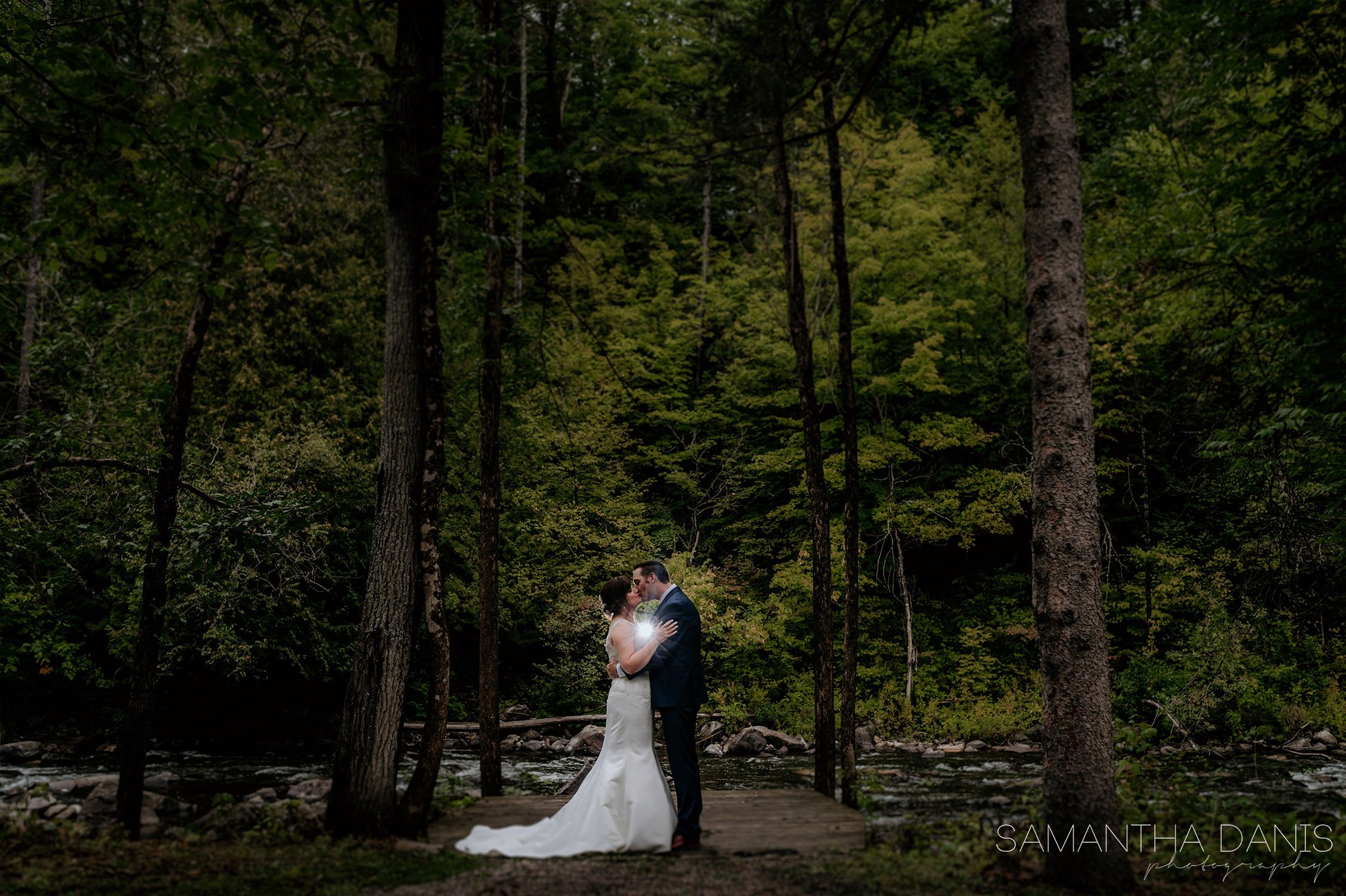 After a group shot of everyone in front of the Wakefield Mill waterfalls (is it technically a waterfall? Not sure on that one) we headed inside to see the beautiful room they would be holding their reception. There were candles everywhere, gifts for guests, beautiful floral arrangement and an absolutely beautiful cake made to look like the bark of a birch tree. It even had their initials ”carved” in it like you would carve them into a real tree and beautiful greenery surrounding it. However I think my favourite part had to be the individual champagne bottles and hand written guest names for each and every guests. Pink for the ladies and green for the guys. Super sweet touch. After a very big hug it was time for me to leave and leave this group to enjoy the rest of their day. This wedding made me smile so much in such a short amount of time and I’m seriously so happy I was able to share it with these two amazing people. Congratulations Cynthia and Frank on finding love and a great one at that xoxox 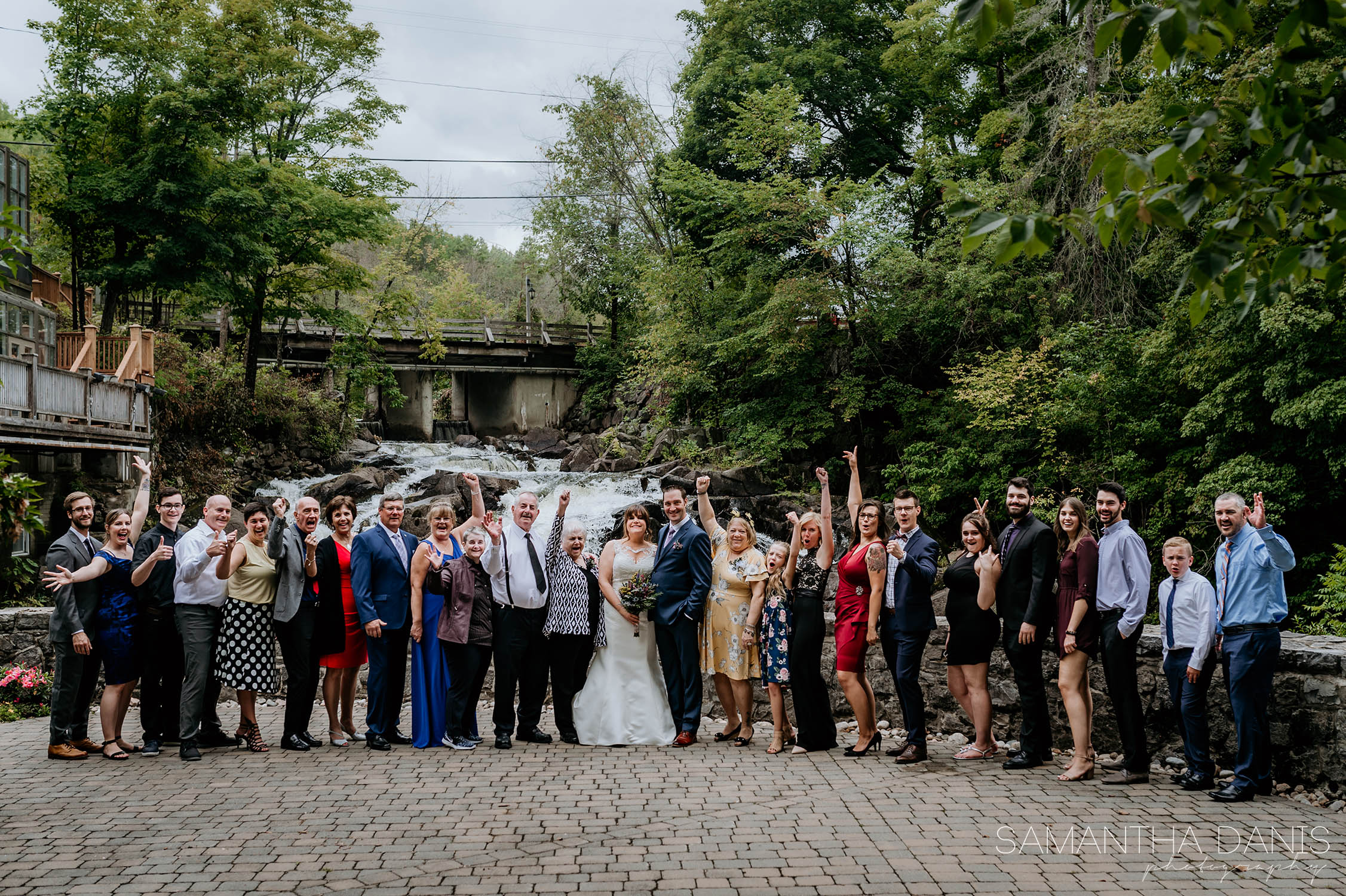 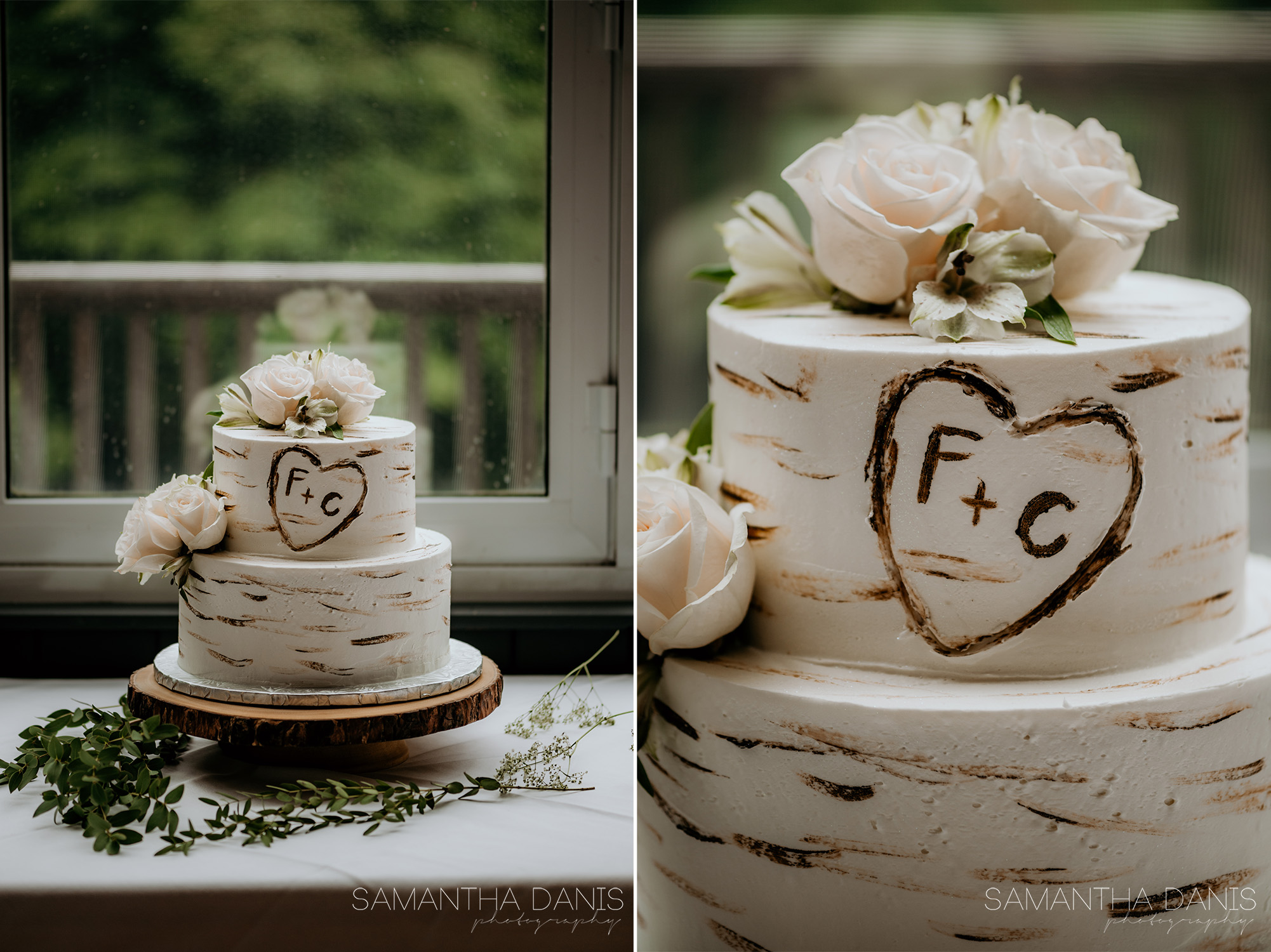 Samantha you are absolutely amazing! A girl of many talents! Both behind the lens and in front. I love the photos you shared of my sister’s wedding so far! Can’t wait to see the rest!

I would highly recommend you to anyone looking for a tallented and creative photographer with an outgoing personality and can really organize a crowd!

She/Her
•Photographer of the madly in love.
•Will drink wine with you 🍷
•Now booking 2022!
•For pricing and enquiries👇🏻

How are we feeling going into the weekend? We got

Happy Friday Friends! Our first week in this Lock

Sunsets are always so beautiful. The different col

Love, Happiness and giggles. That's what I love to

I will never forget this moment💜 The Tornado w