I’m going to start by saying, a Backyard wedding is my new favourite thing. Especially when they’re done right (which luckily, all of mine have) and Cydney and Luc’s wedding was no exception! Originally, their wedding was supposed to be September 18th and at an old Barn in Navan but with the pandemic and everything going on, they opted to move their date up to August which I was so happy to do for them. When the date approached, we had our final consult which is where they’d told me they would actually be having the wedding in Luc’s parents backyard. I was excited to hear about all of their plans and get to see it all come to life, and boy did it ever come to life.

I started my day with the girls at Cydney’s parents Air B&B in Orleans. The girls were upstairs in multiple rooms fixing their hair and makeup while dad was already dressed downstairs just listening to the girls chitter chatter. I took this time to do details because c’mon, who doesn’t love a good detail shot of the rings and the dress, right? Cydney’s dress was pretty much to die for. It had beautiful beading throughout and a gorgeous train at that. It was also fairly heavy thanks to all that beading, I wasn’t sure my command hook could handle the weight, but it did its job. Good old trusty command hook. And then I asked Cyd for her engagement ring. She looked at me with big eyes like ‘’what?’’ which made me laugh. I assured her it would only part with her for a brief moment and it would be safe. She had a beautiful soft blue velvet ring box that also held her wedding band which, damn, it looked soooo good. Luc really did a good job on her set.

Once done with those, I went downstairs only to find the girls sitting on the couch, drinking water because the mimosas had already run out and they had a good 30-45mins before they had to get dressed. So they did what any group of ladies on a wedding day would do with time to waste… They played Heads Up. They were actually pretty good at it too, I may have played too and had a great time laughing all together. And then it was time to get everyone dressed. The girls all wore these beautiful sandstone (shade of orange) coloured gowns with all slightly different straps and backs. It was cohesive without being exactly the same which I love! Cydney’s mum and sister (and maid of honour) helped her into her dress and with all her accessories. As Emma was attending to all the beautiful buttons on the gown, mum looked on so lovingly at both her daughters. You could tell she was so proud in that moment. After a quick hug, it was time for first looks with her girls. 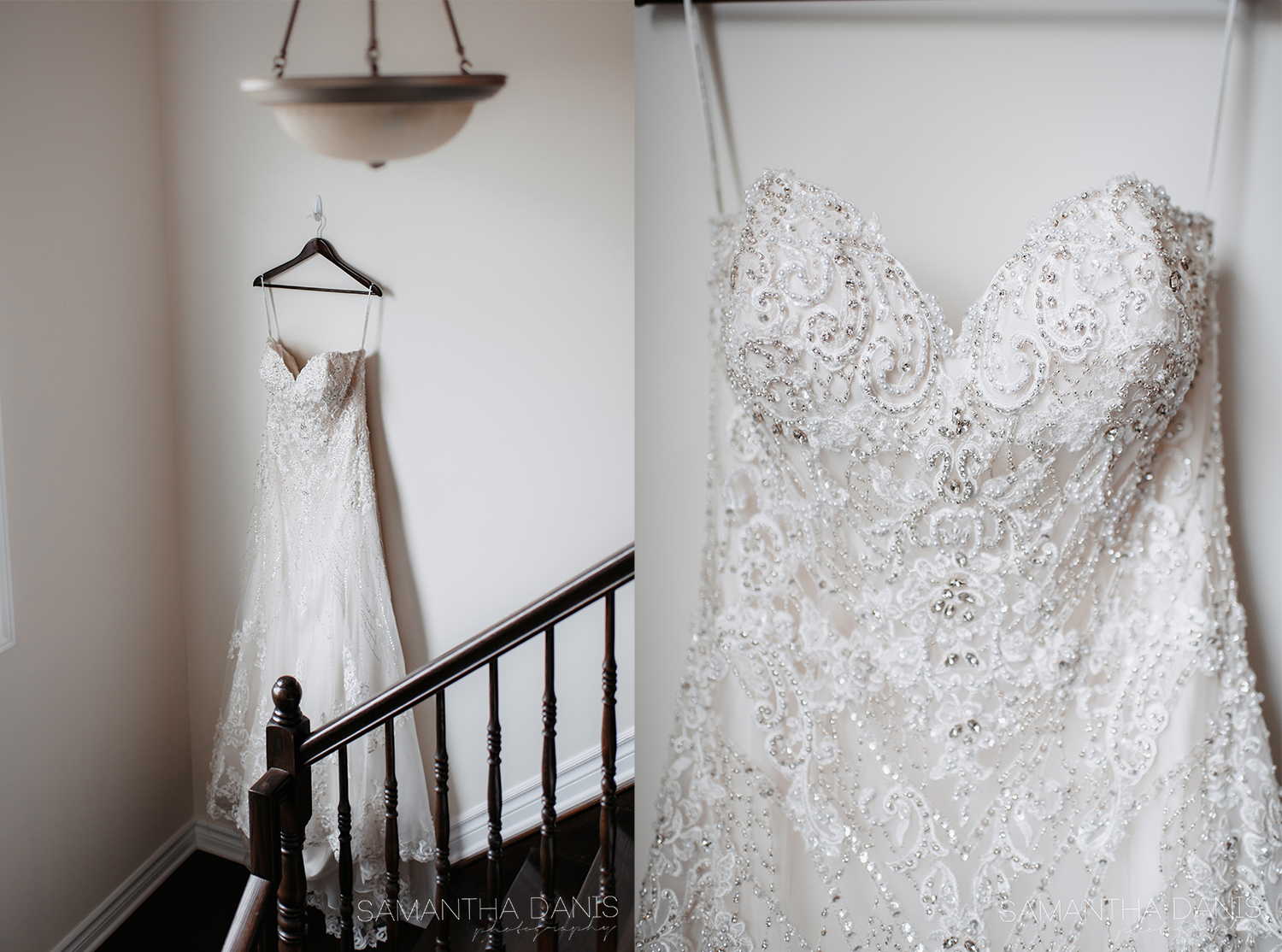 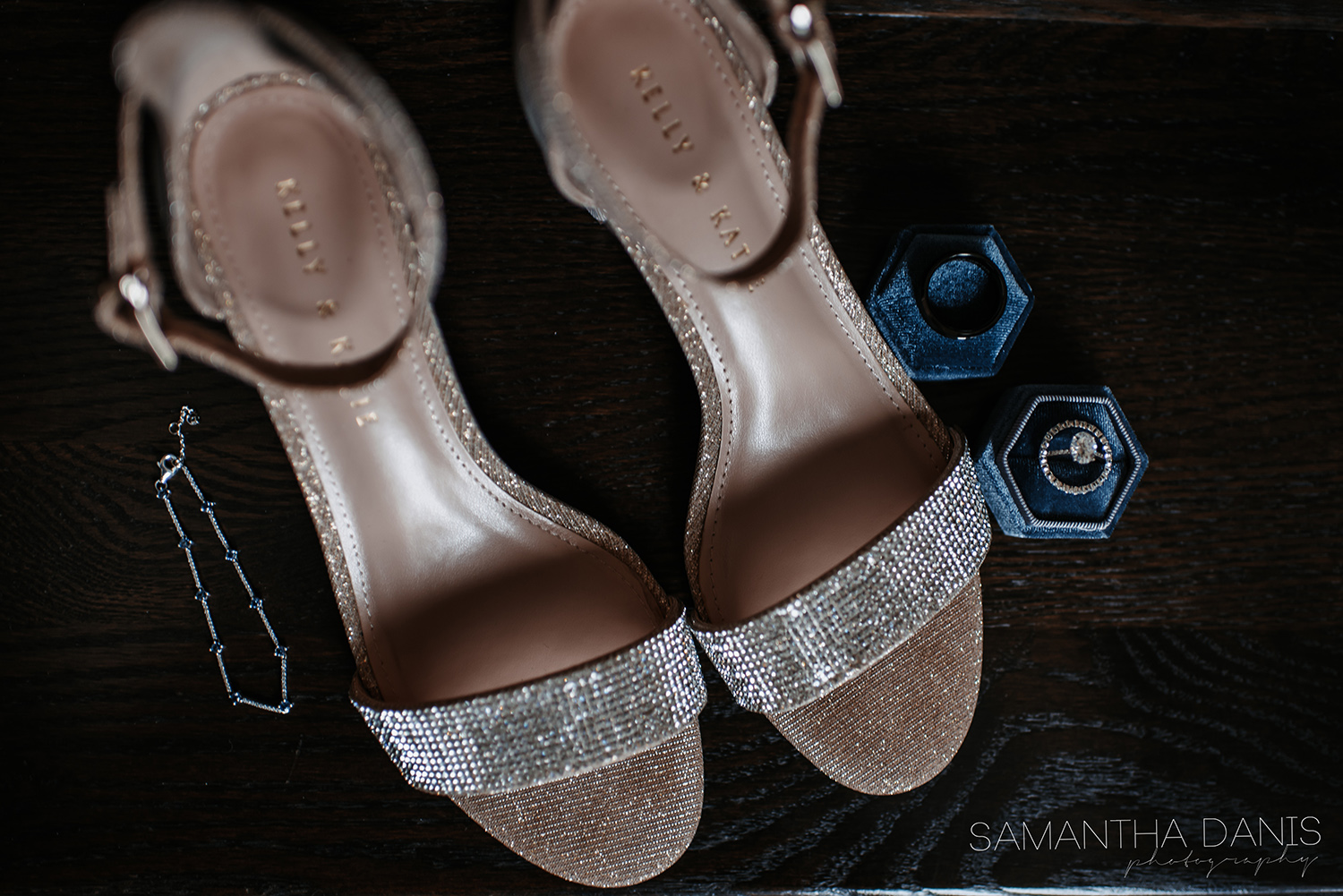 They all stood in the living room with their eyes closed, anticipating their best friend as she slowly made her way down the stairs. As soon as they opened their eyes, the tears started flowing. Surprisingly, Emma cried too even though she’d helped her sister in her gown moments ago. I think just all the happiness and tears around triggered crying from everyone and it was truly beautiful. They hugged, oo-ed and aw-ed, and just basked in the moment. Then I stole Cydney away to do the same first look, but with her dad who was waiting outside. David was not too pleased that I was making him do this. Not in an angry way or anything, more in a ‘’dang it, you’re going to make me cry way’’ but if it’s for his daughter, he was happy to do it. As he turned to see his baby girl for the first time, the tears came instantly. My plan was a success and both father and daughter were able to have a lovely moment together before all the craziness of the day. The crew went back inside for final touch ups because it was almost time for the limo to pick them up and time for me to finally head over to the ceremony. 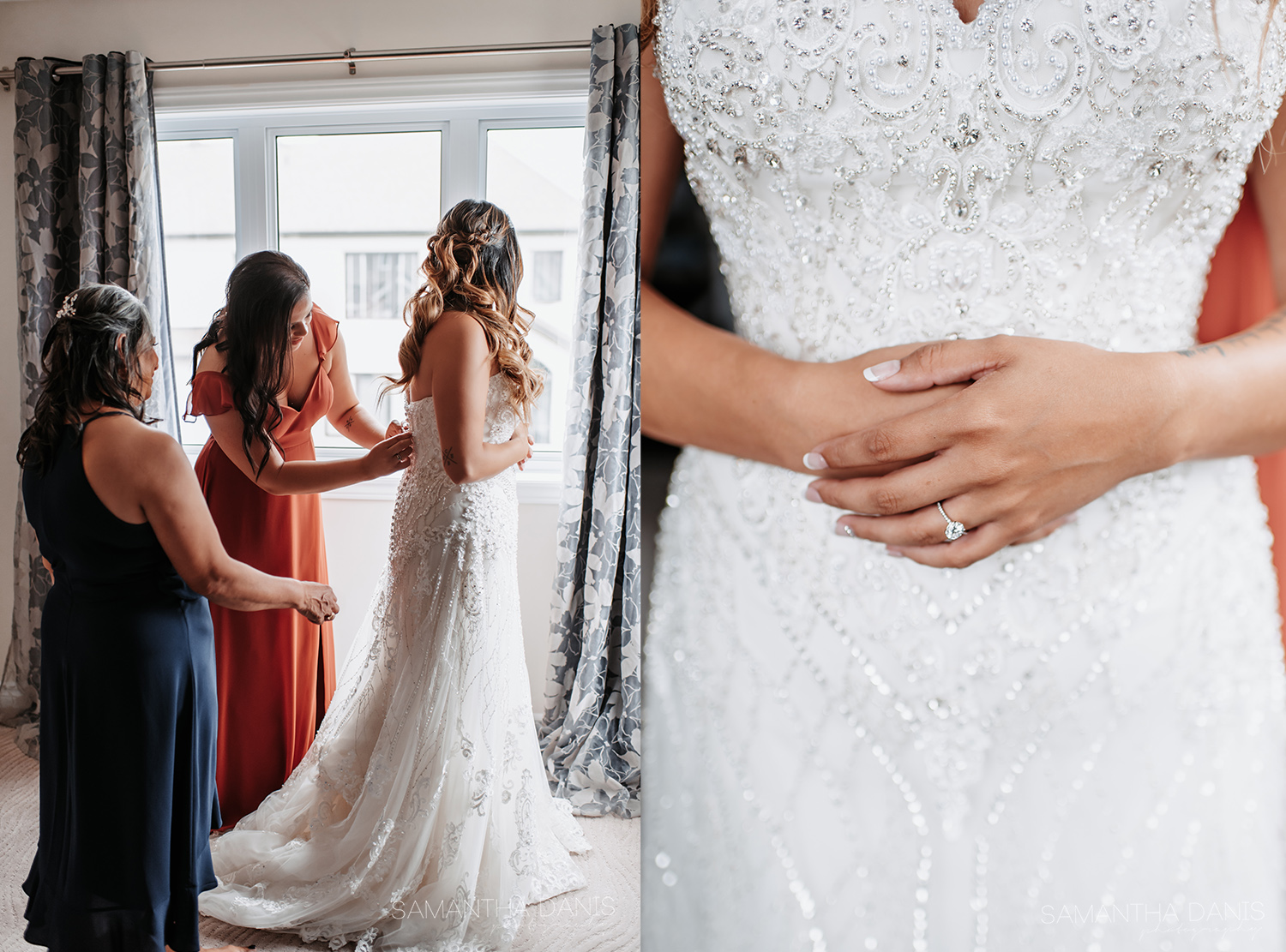 I arrived to Luc’s parents home to find two well dressed gentleman at a table inviting guests to sign the ‘’guest book’’ which was a beautiful wooden round with their last name in metal placed at the center. Little signs were all over to property showing guests where things were going to be during the evenings festivities. The ceremony site was beautiful, white chairs lined either side of the aisle with shepherds hooks holding mason jars with flowers and barrels with flowers all over the property as well. They even had a stage with an archway at the very front of the aisle. Just so you all know, almost all weddings end up running late, this was no exception. As the guests arrived, 3pm came and went and we were wondering why the bride and her crew hadn’t arrived yet. Well, turns out the limo was a wee bit delayed and so the ceremony didn’t start until 3:30pm. Luckily for us, backyard weddings definitely can have their own timeline haha.

After a bit of freshening up and calming of the nerves, it was time to start! Luc and his boys all walked down together super casually in a group and not in a line. His and Cydney’s brother then followed behind as they walked their mums down the aisle to their seat and then joined the guys on stage. The girls followed suit and looked absolutely beautiful. Finally came Cydney and her Dad. Can’t help falling love played as she made her way down to Luc, smile and all and I don’t think I saw her cry either, I was very surprised. 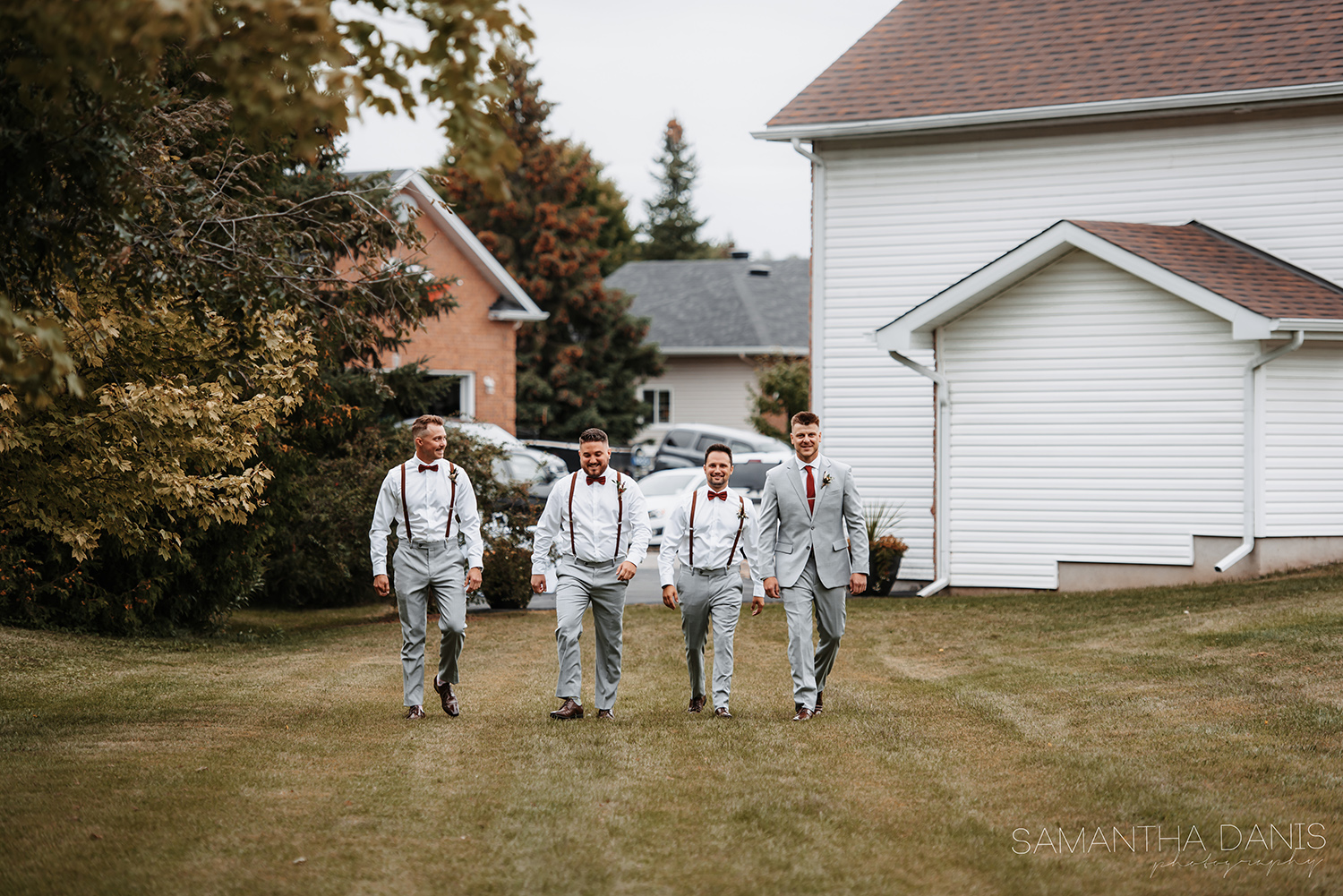 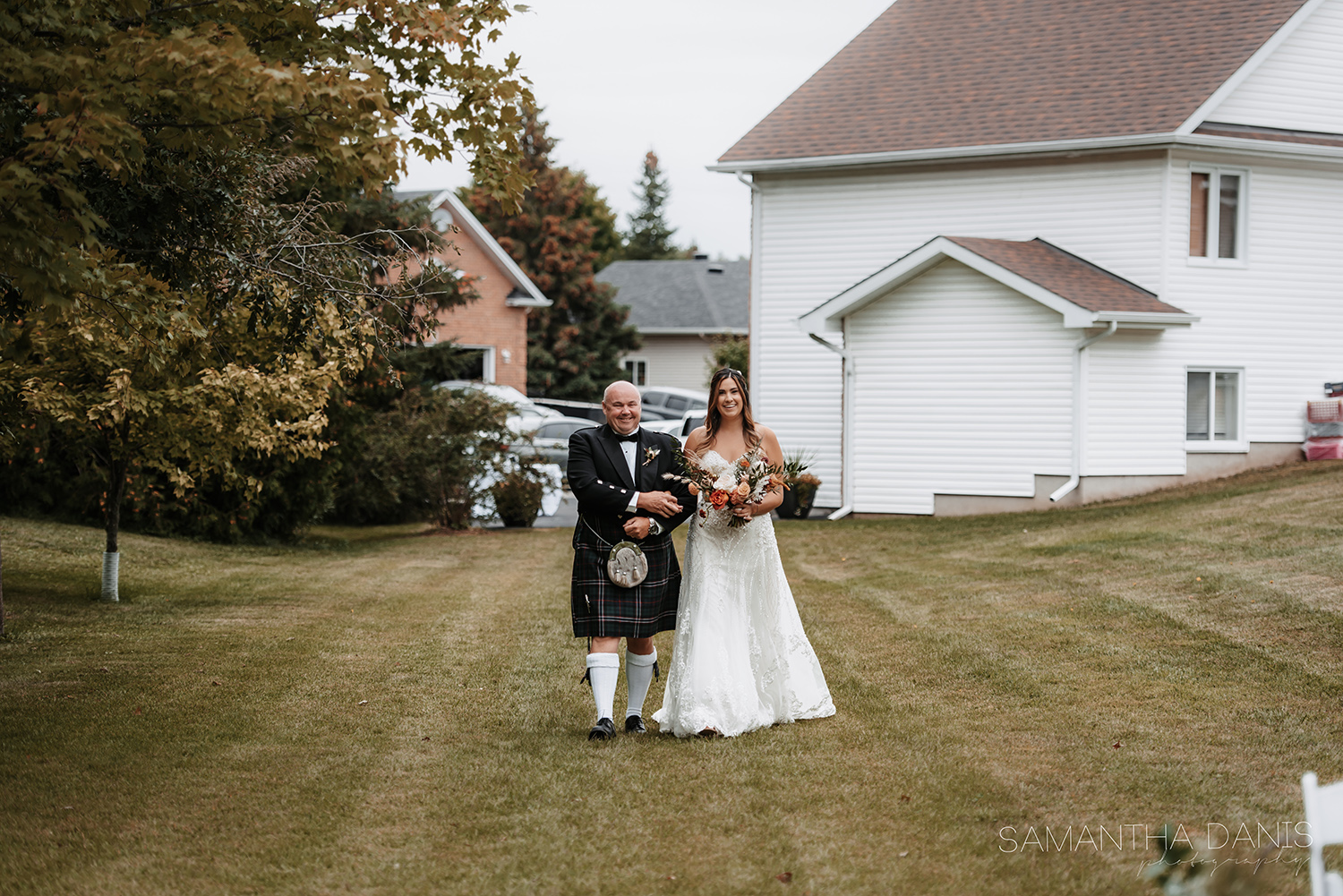 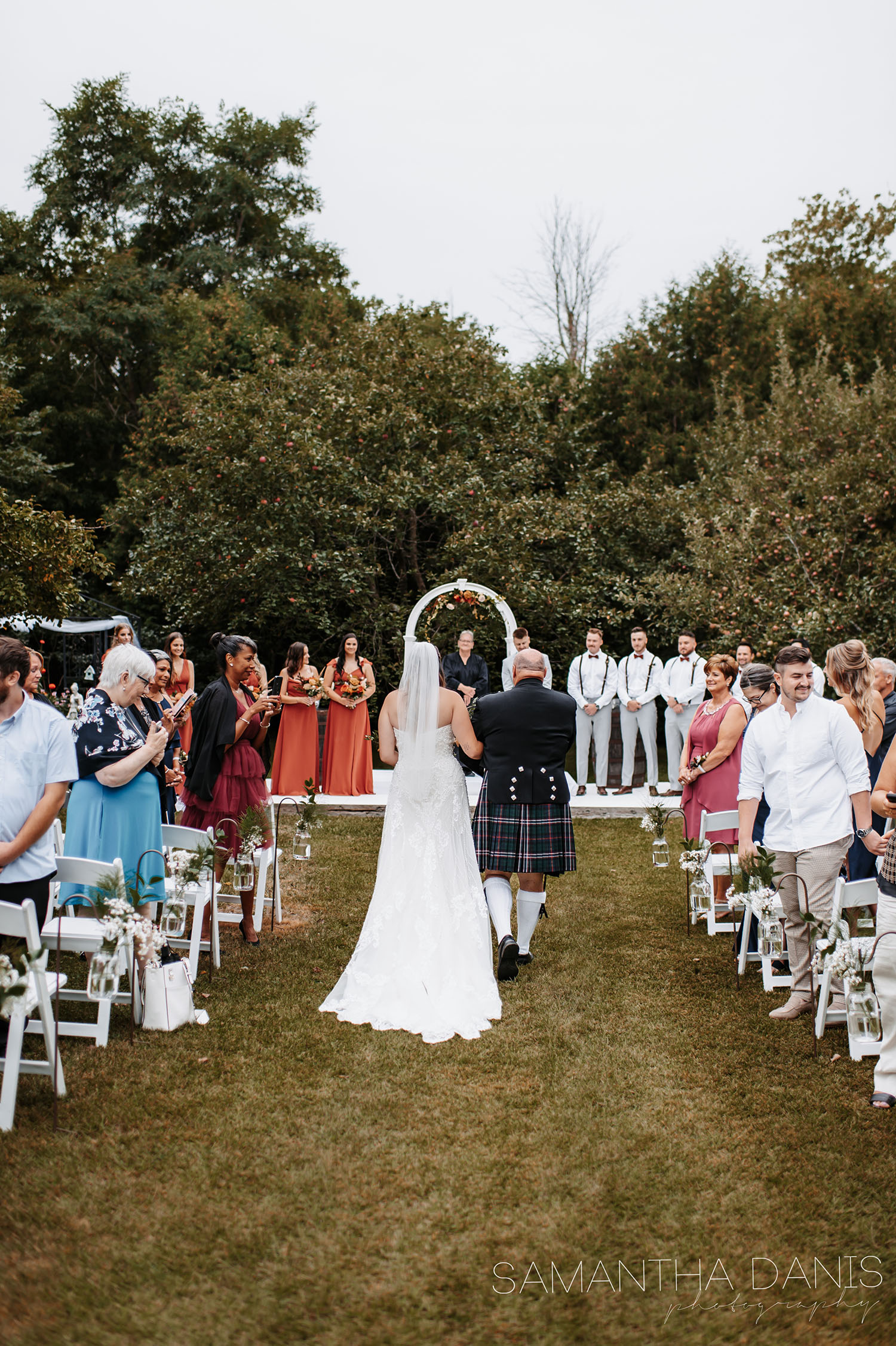 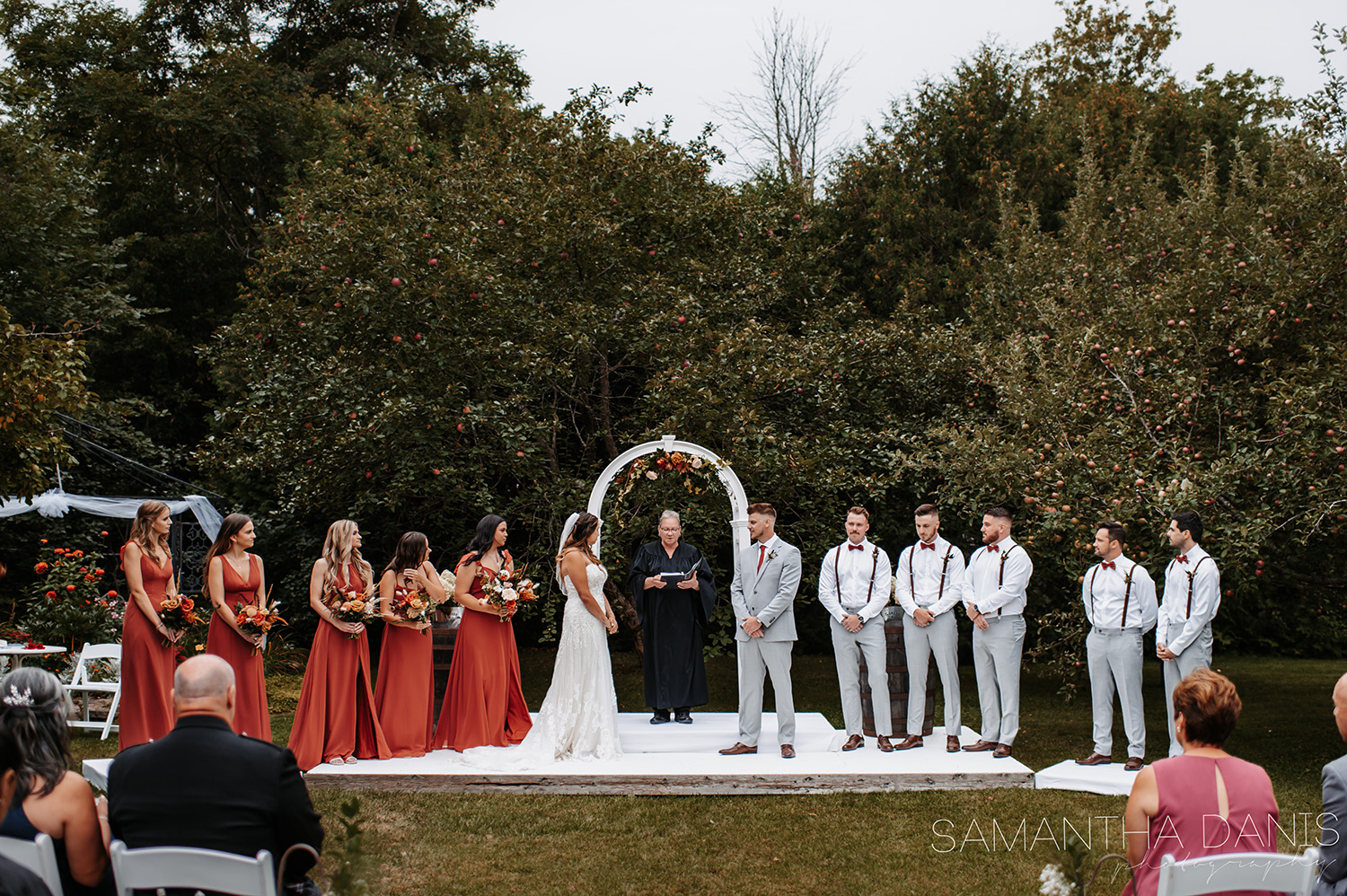 The ceremony was beautiful, held in a corner of Luc’s parents property with a beautiful white stage set up so that everyone could see the Bride, Groom and wedding party. The neighbours even sat in their yards to watch from afar (people just love weddings). Cydney and Luc wrote their own vows to each other, beautiful promises to each other that make all of those around them laugh and cry, especially their parents. They also gifted their mothers a single red rose as a thank you. With a kiss and a celebratory cheers, Cyd and Luc were finally pronounced husband and wife. 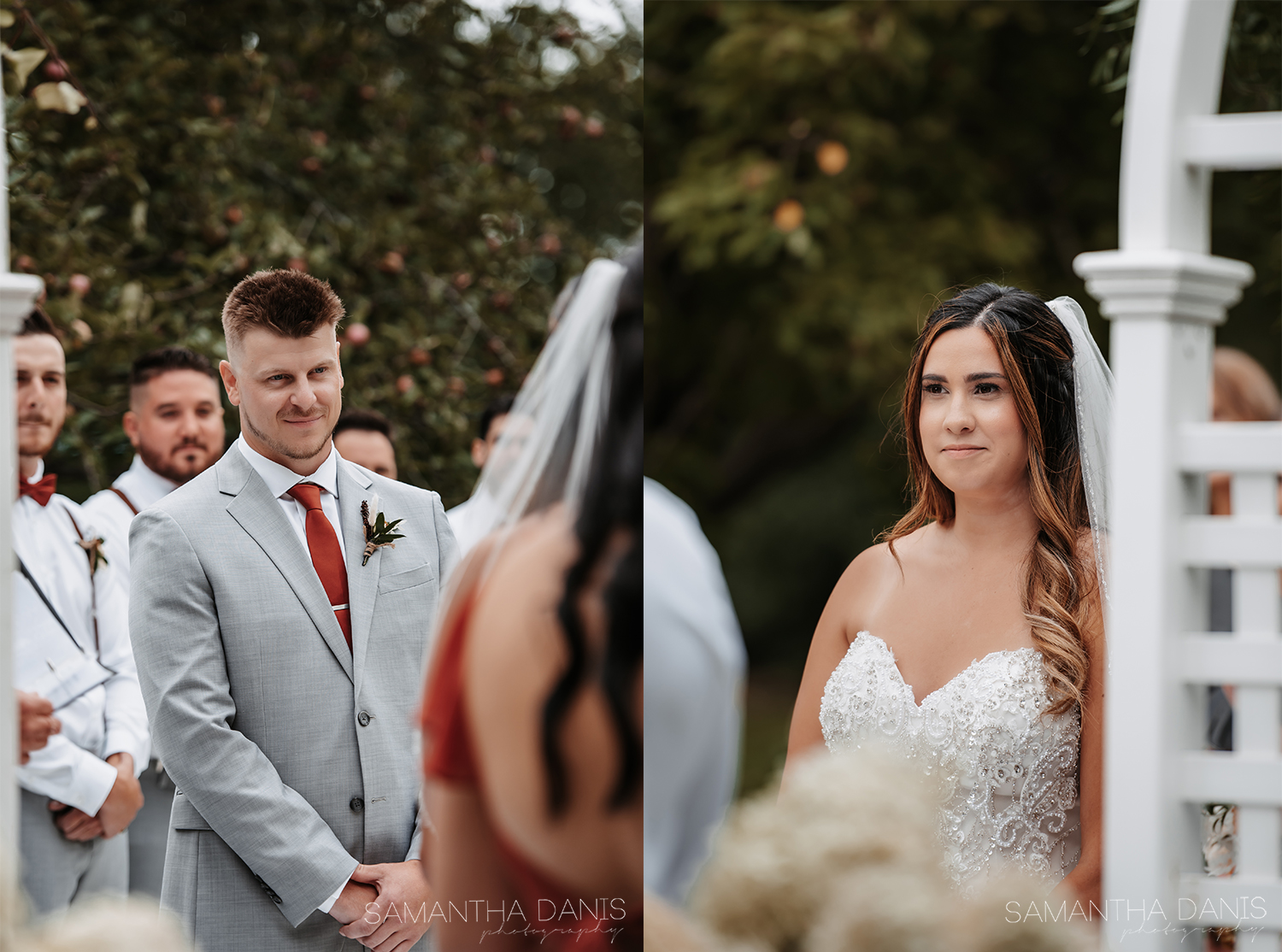 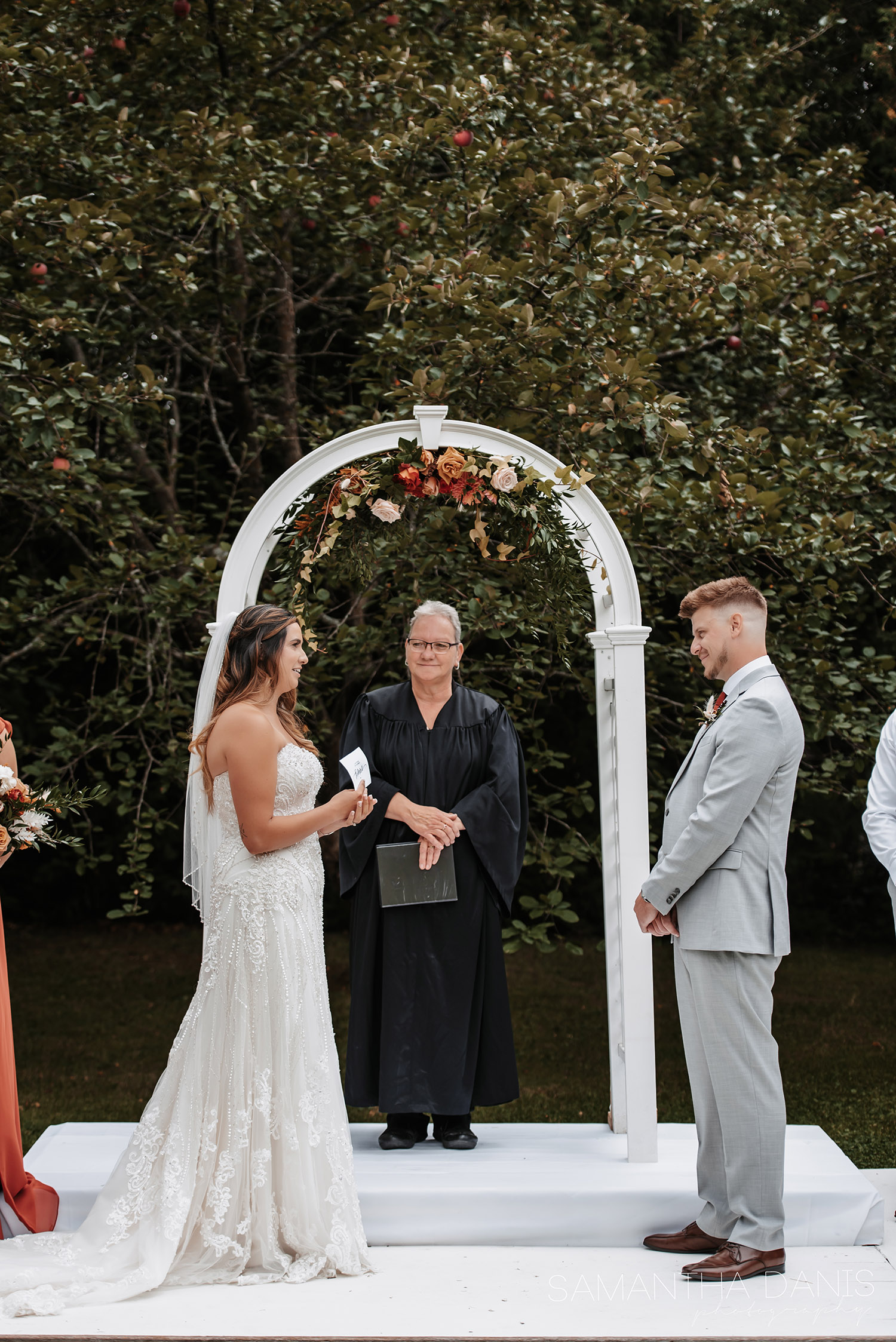 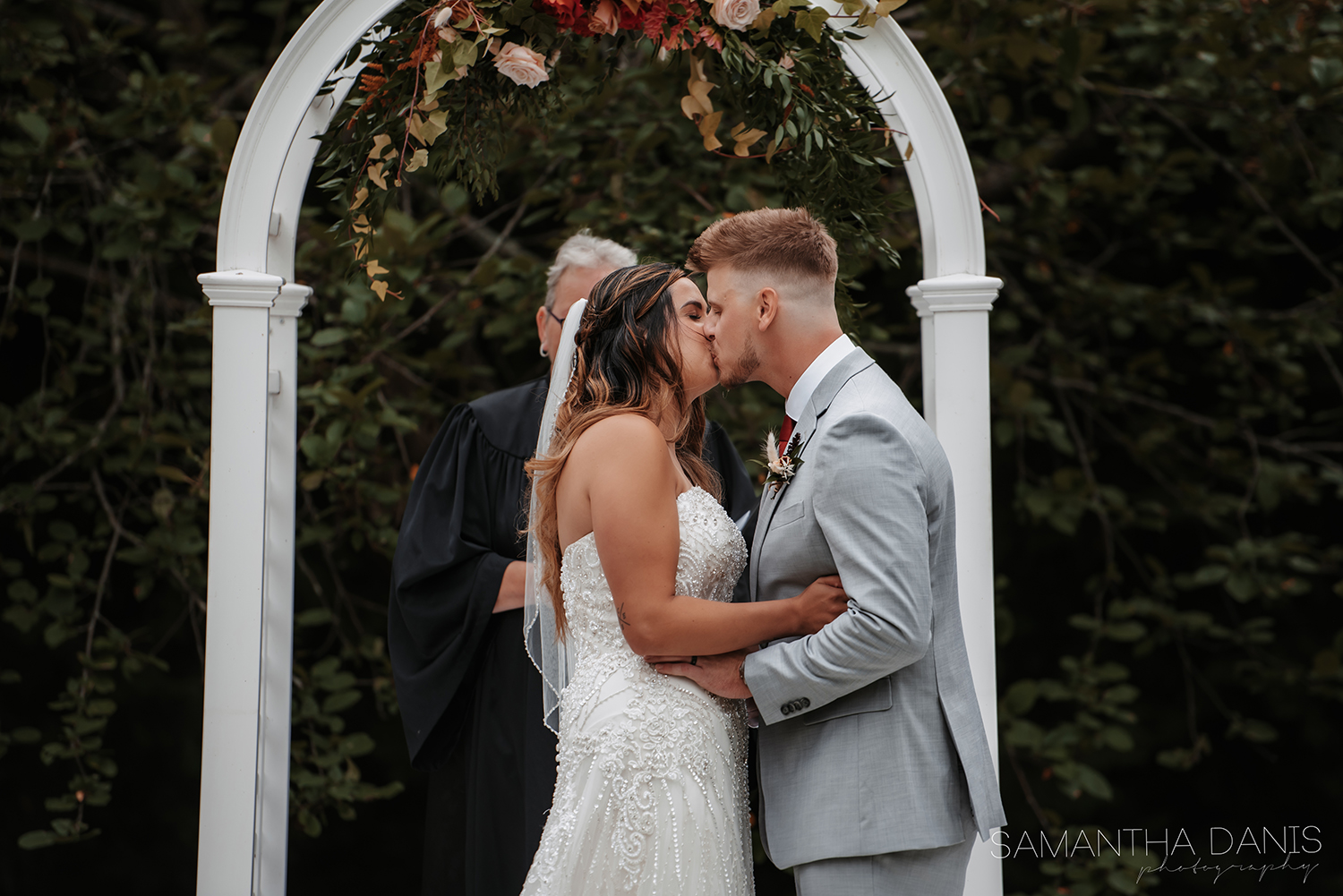 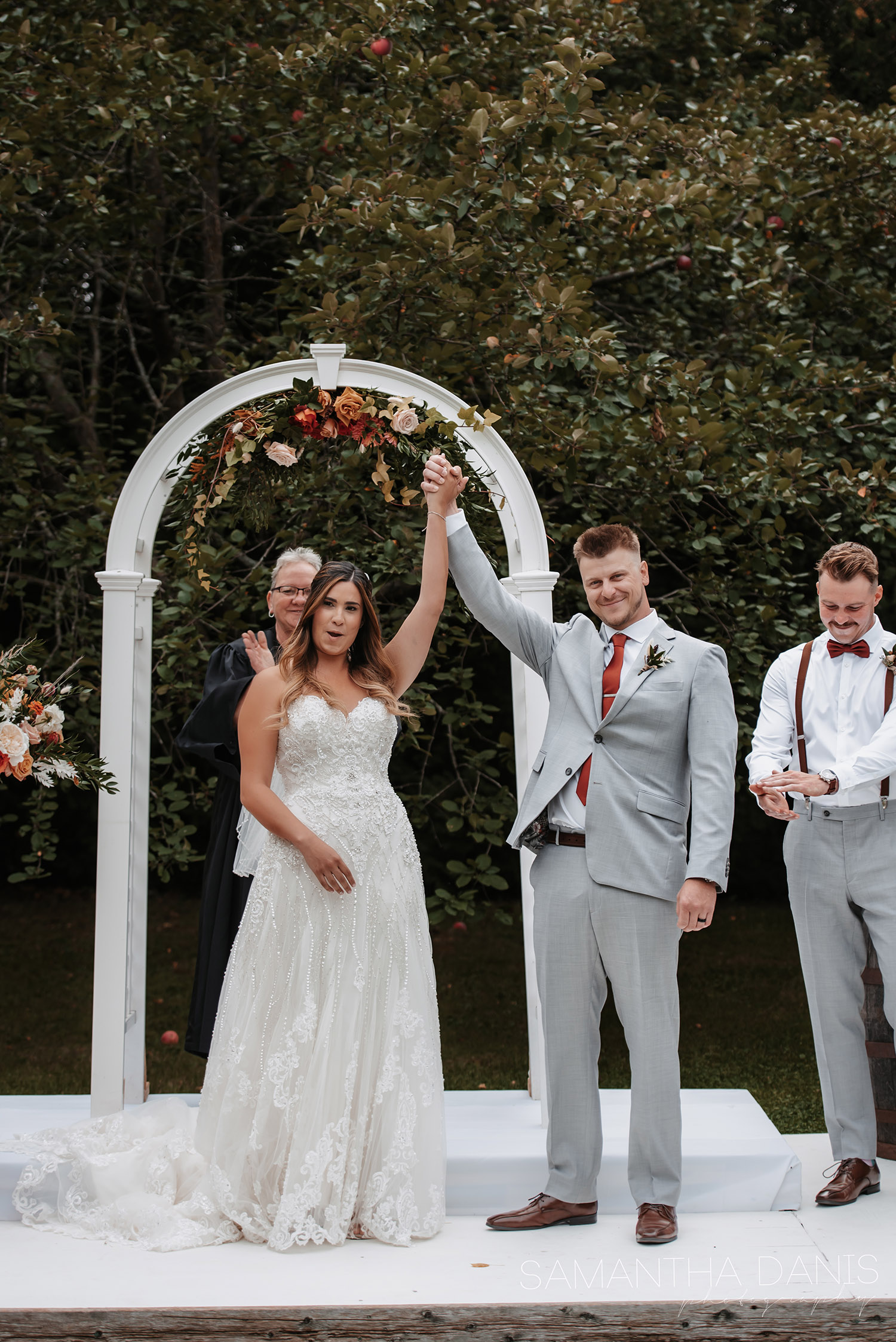 During the family portraits, I made sure Cydney was fluffed and taken care of but girl’s stress had gone away and all she wanted was to celebrate with those around her with a glass of champagne. So whatever my bride commands, she gets. We ended up taking the limo off to a nearby park for some photos and no ones phone worked with the limo sound system so I came to the rescue! Gave them my phone, my Spotify and off they want to party on the less than 10mins ride. The drinks had just started flowing when we arrived. I made quick work with the bridal party and let them go back to the party bus while I took some time with the happy couple. 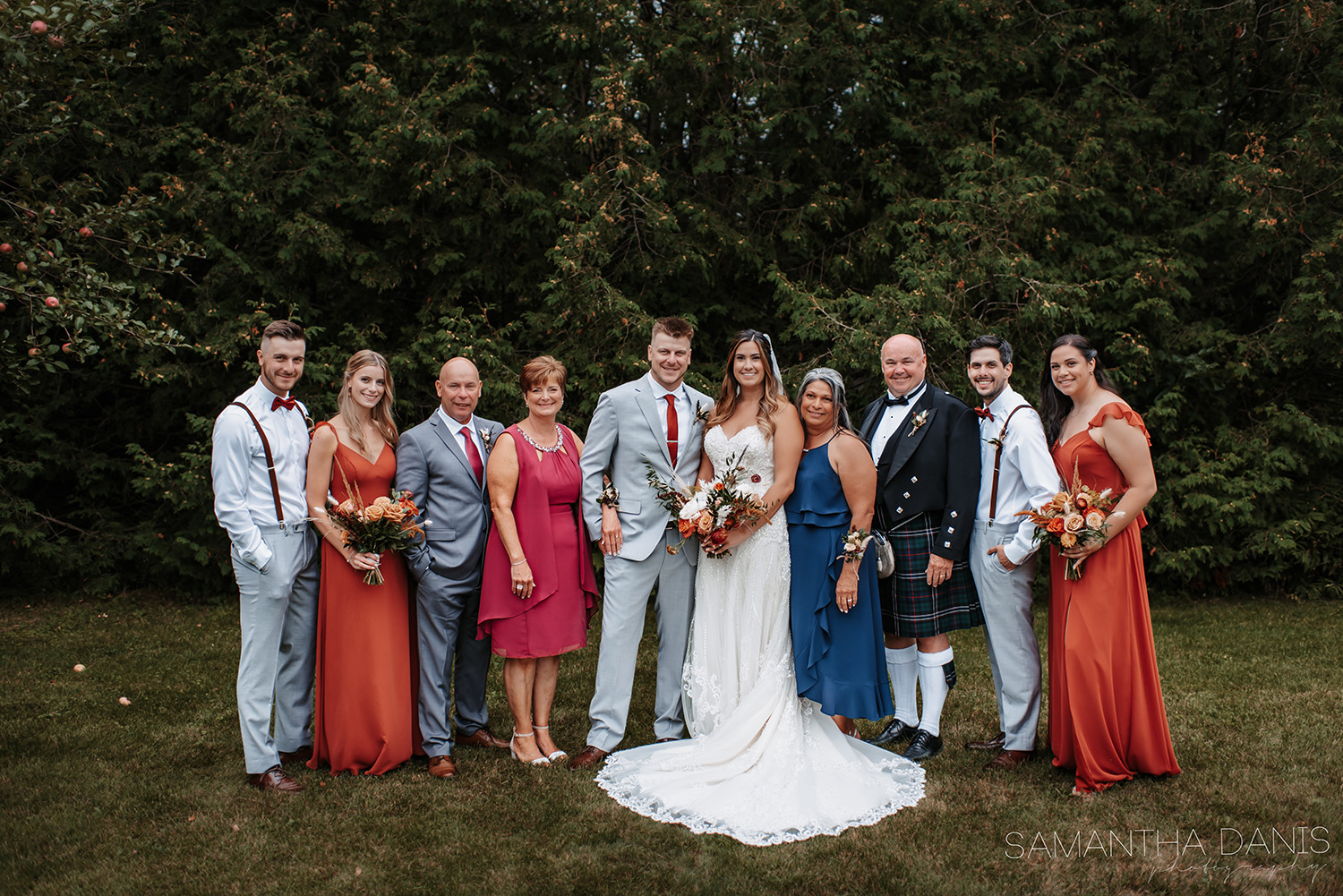 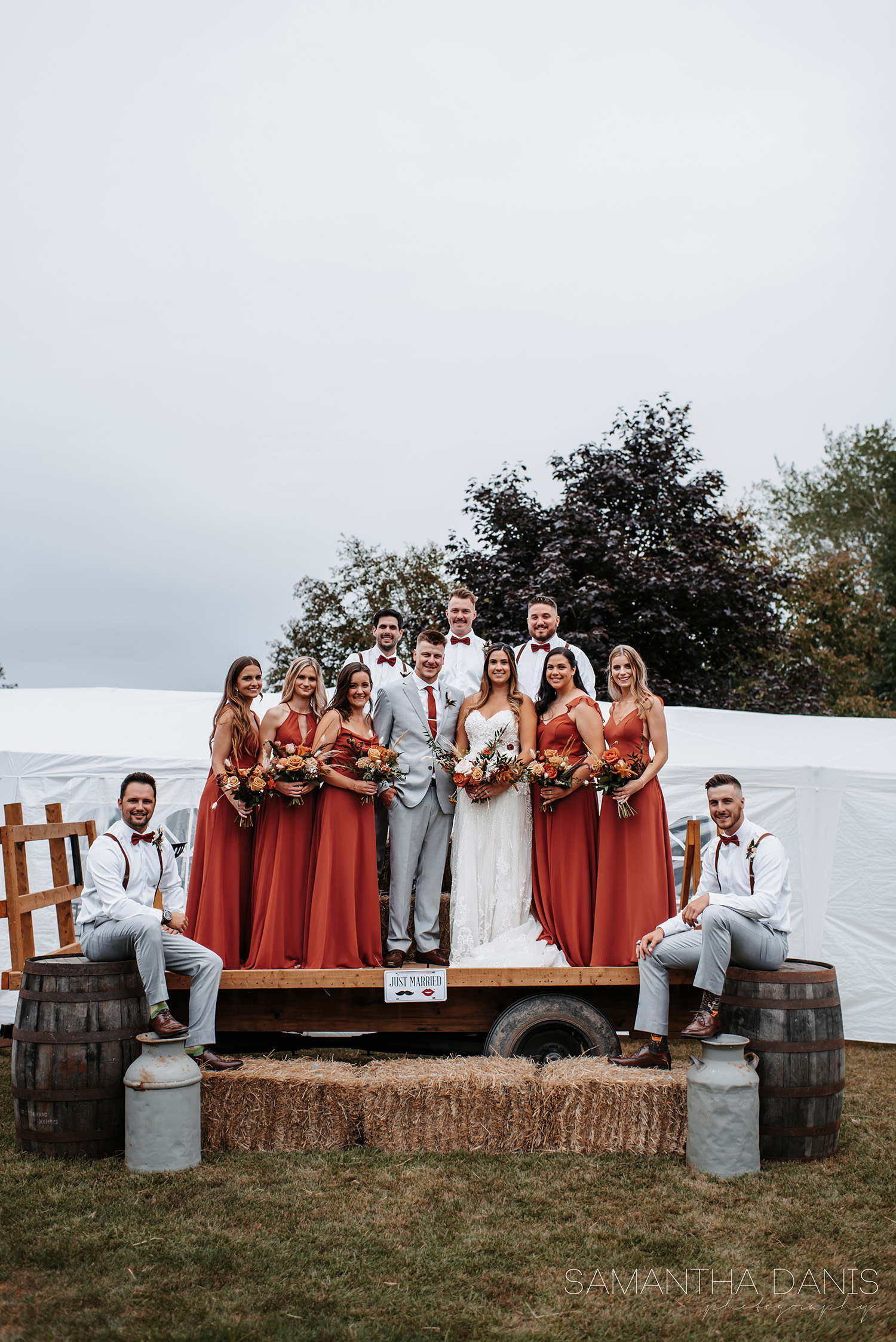 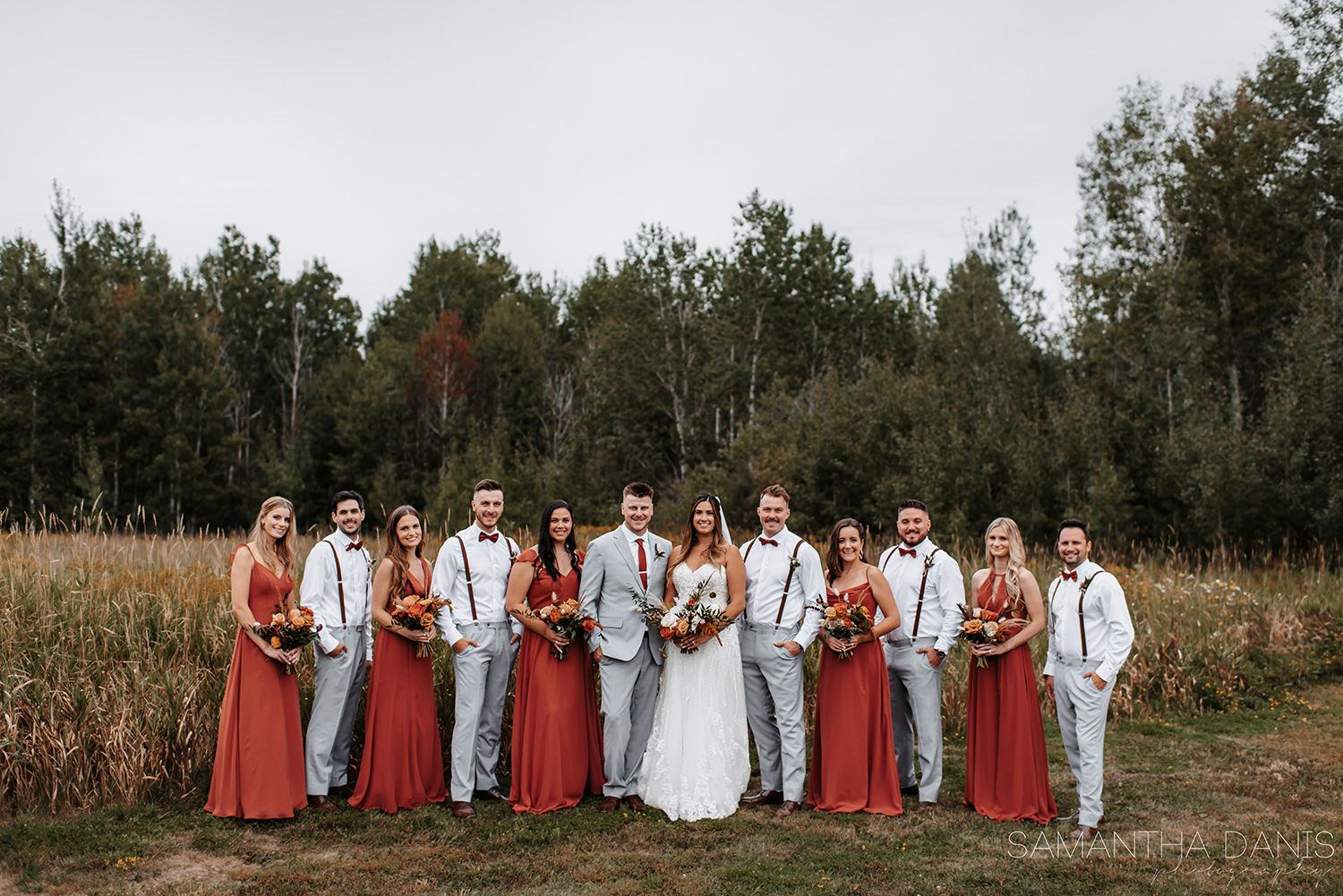 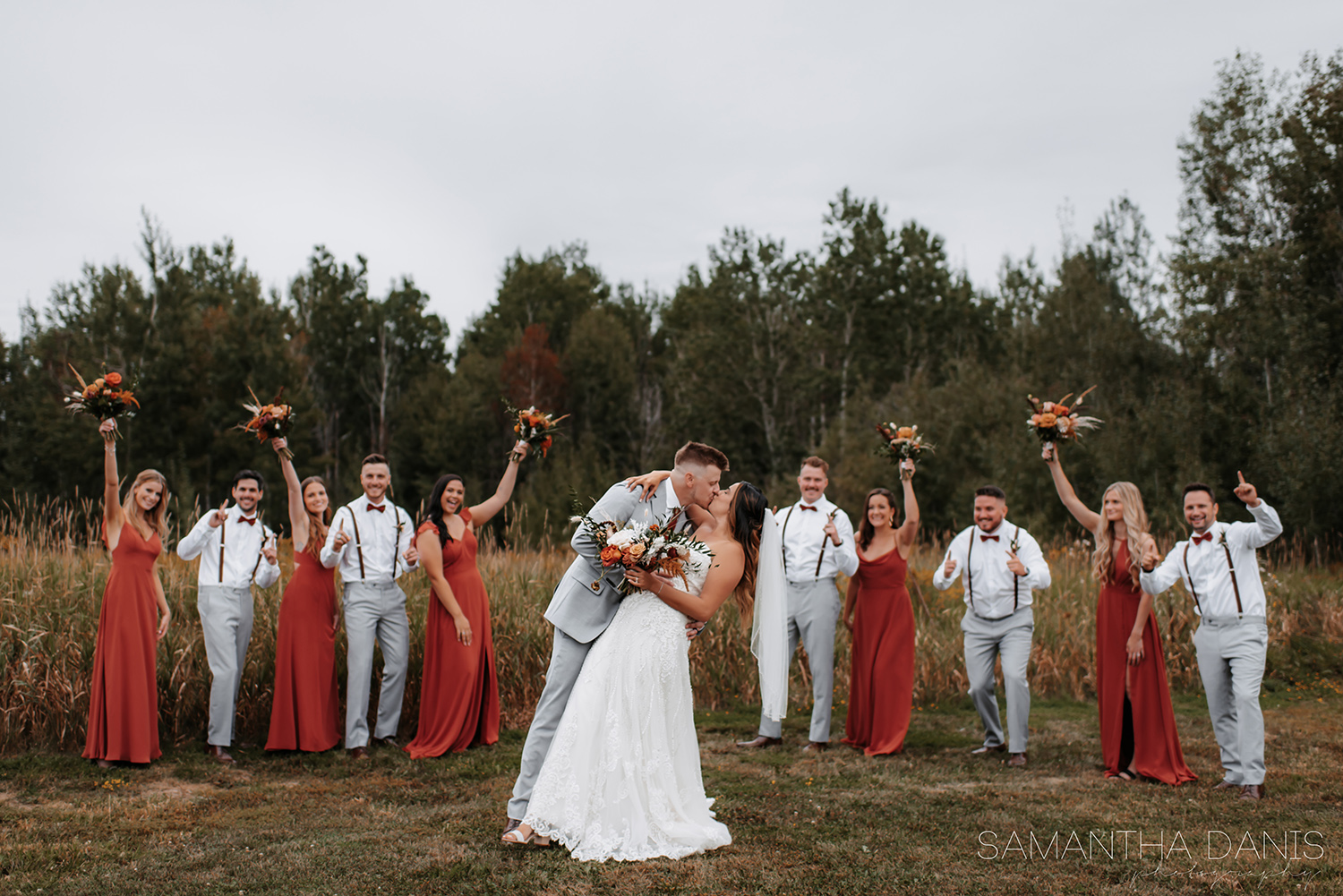 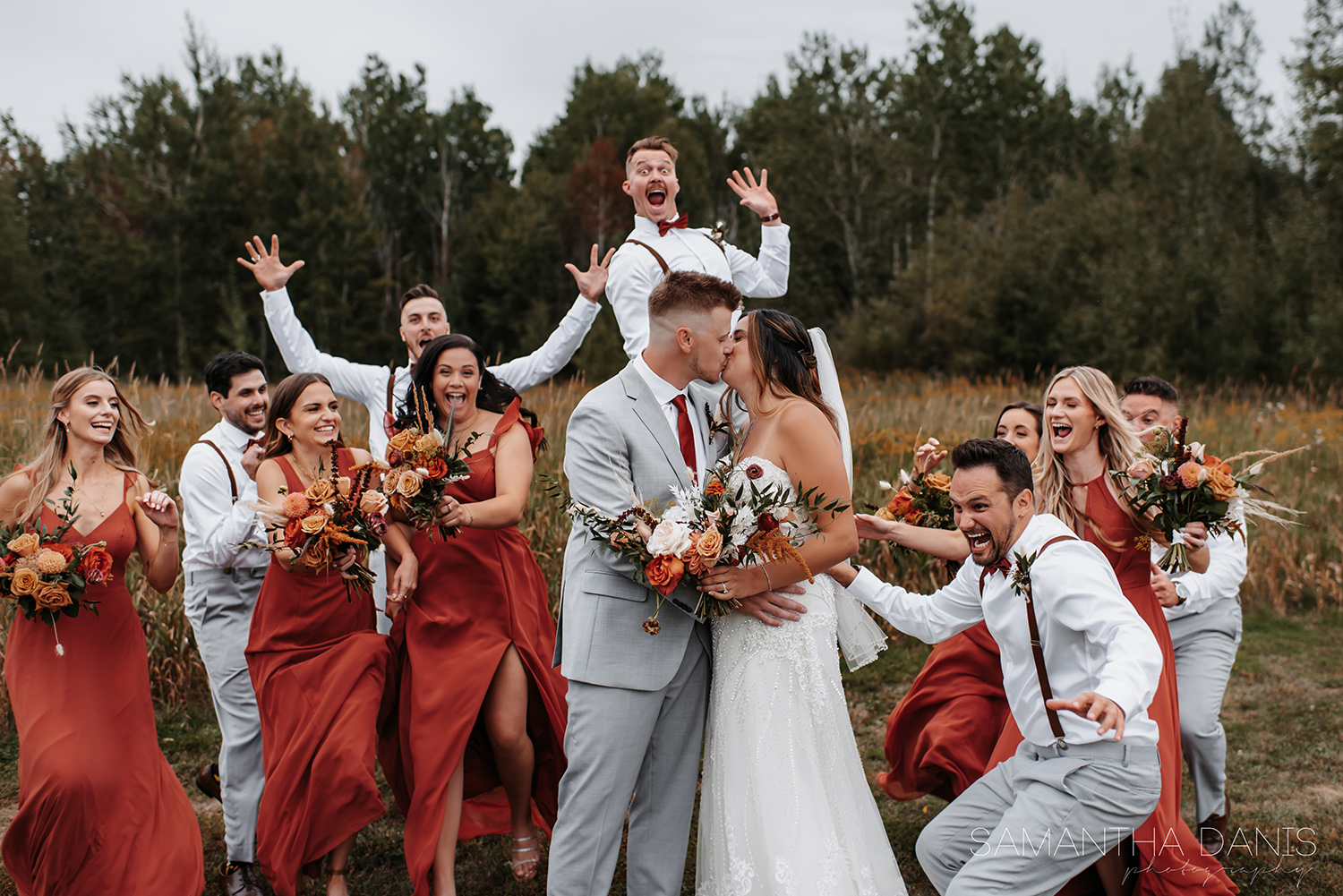 Couples photos are one of my favourite parts of the day. Not only because they’re beautiful but because it allows the couple to really have a moment for themselves (well with me but I’m a blast so it’s fine). It gives them time to breathe and just soak everything in, to relax before the business of the reception. Simply put, a moment to be in love with no eyes on them. We had fun wandering around the green space, and getting honked at by every car that passed. After taking a few extra moments for themselves, we made our way back to the limo, it was time to really get this party started. 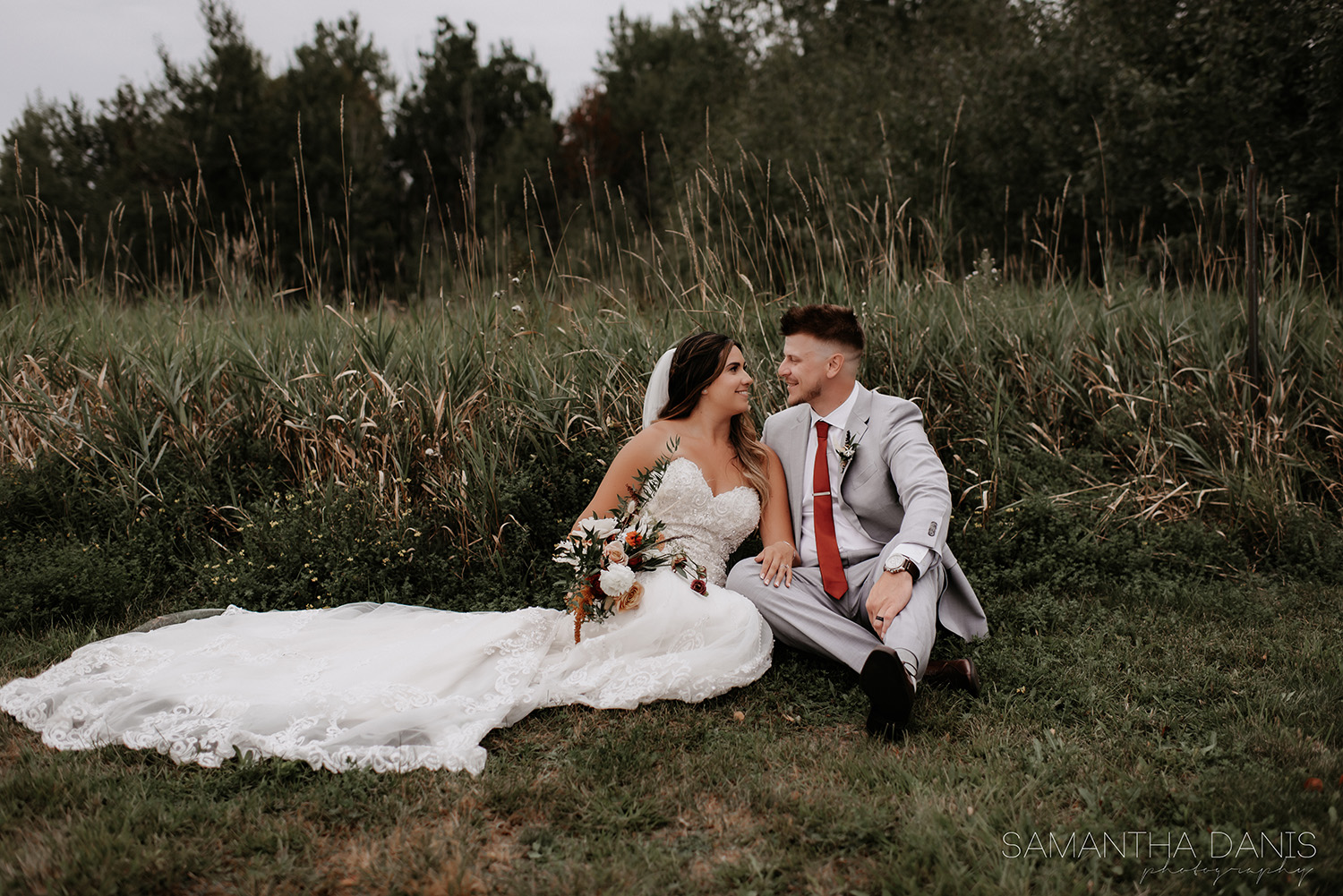 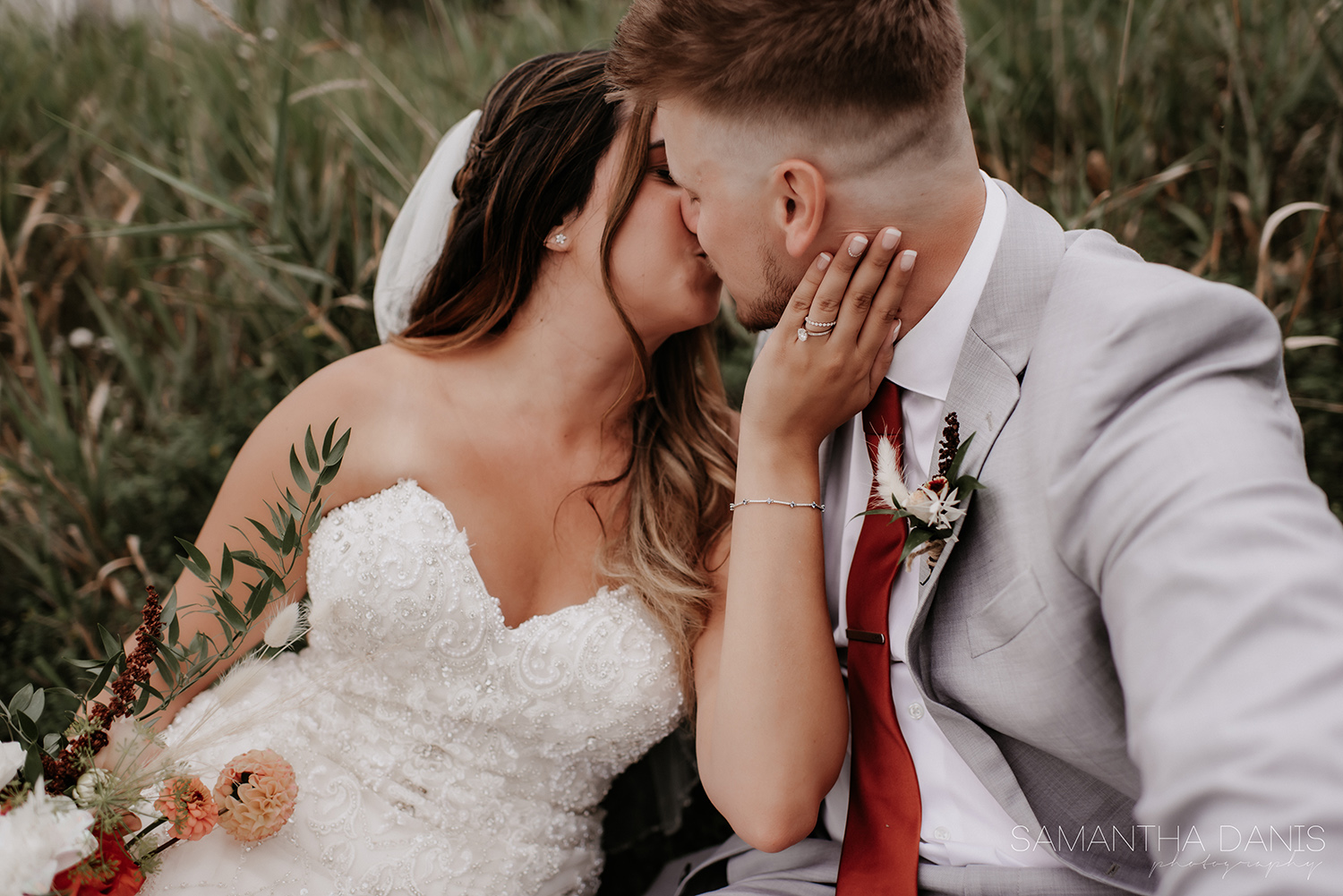 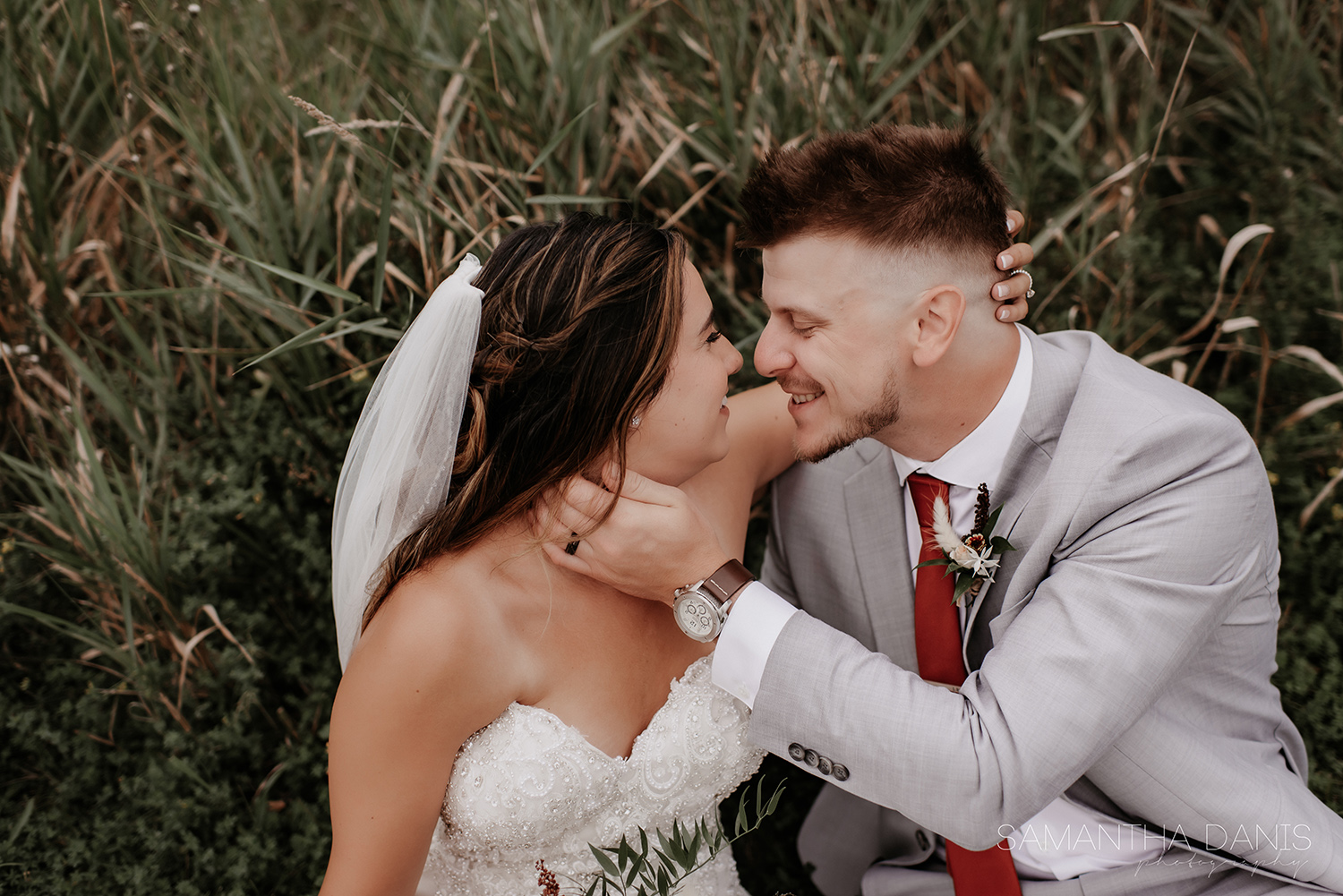 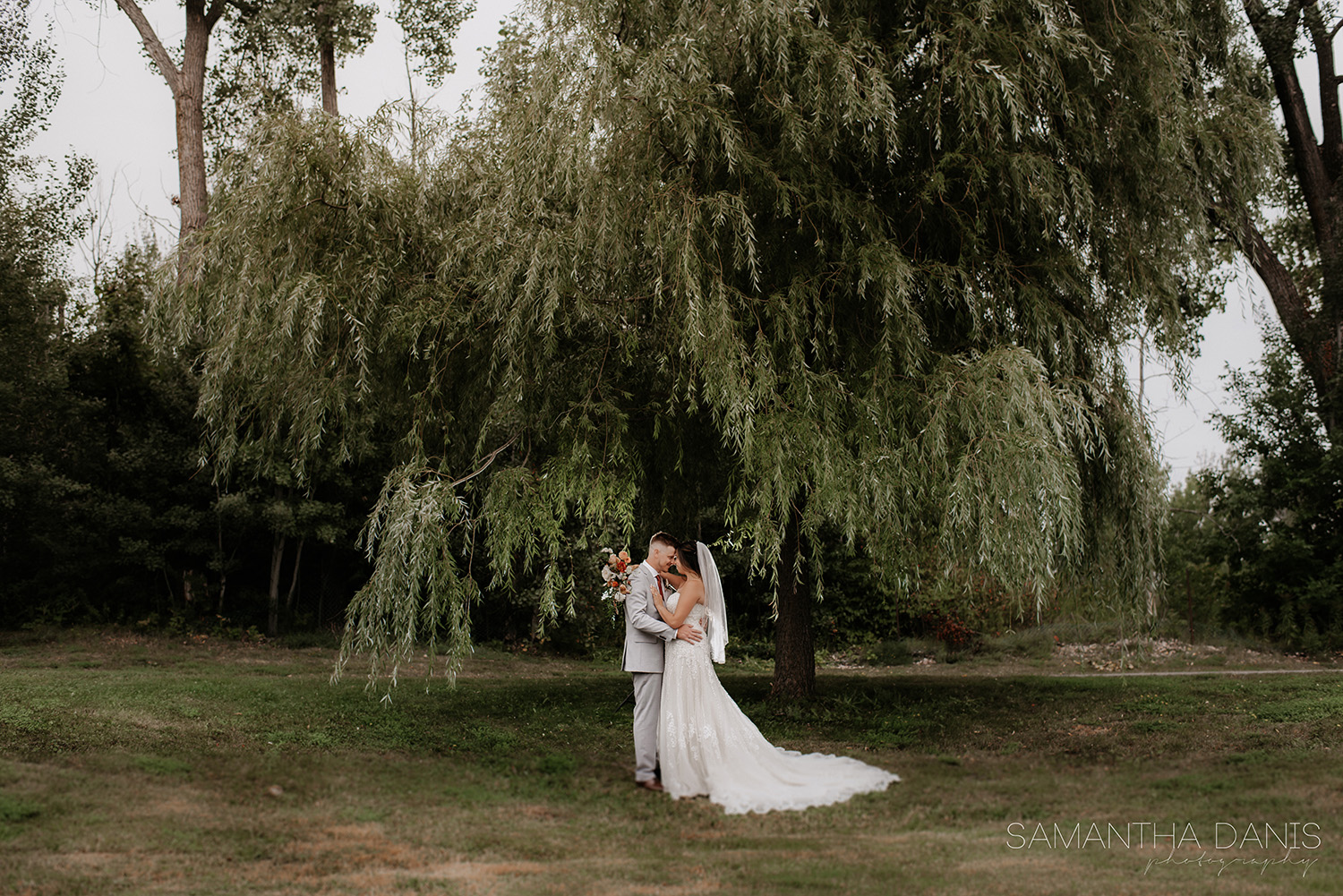 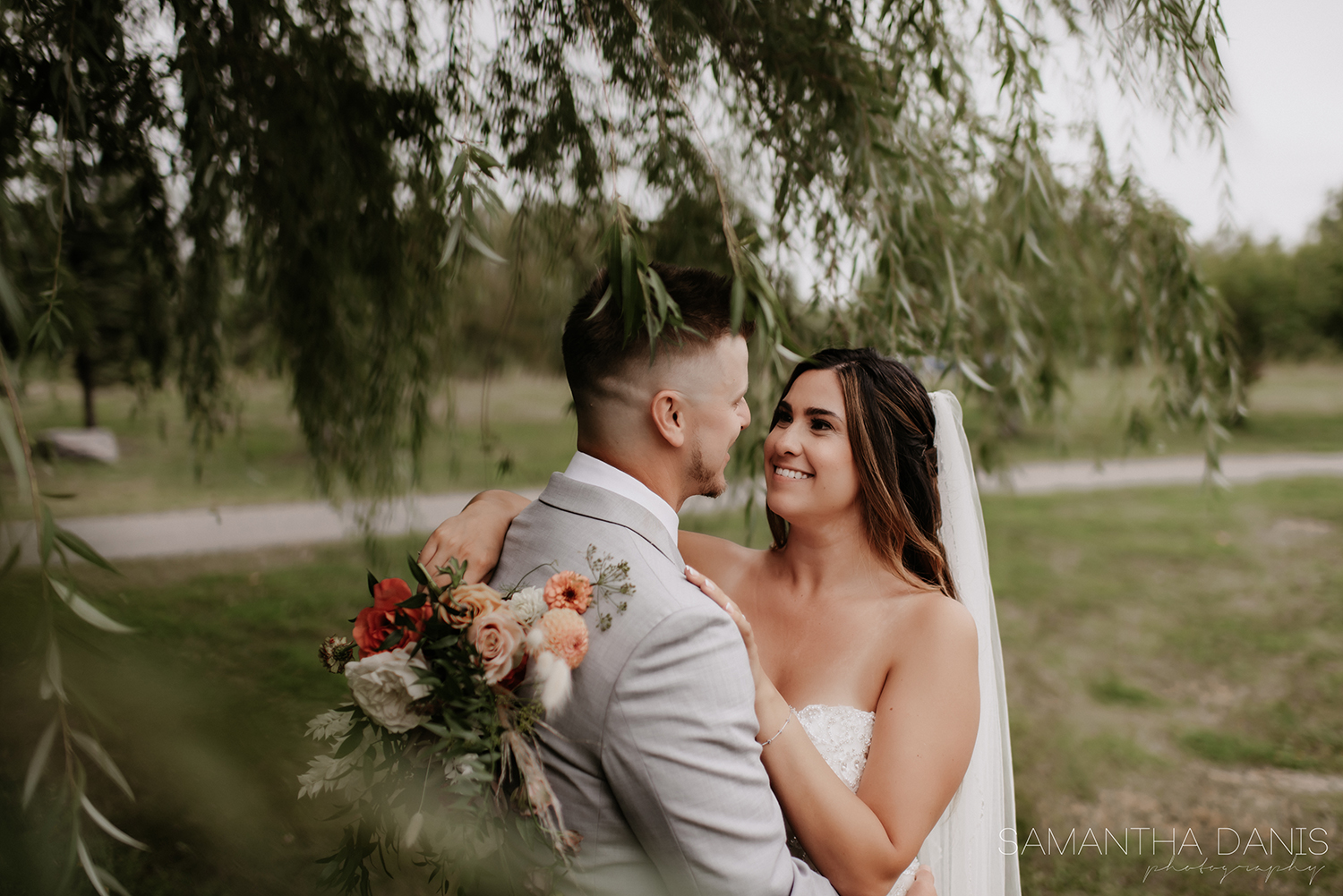 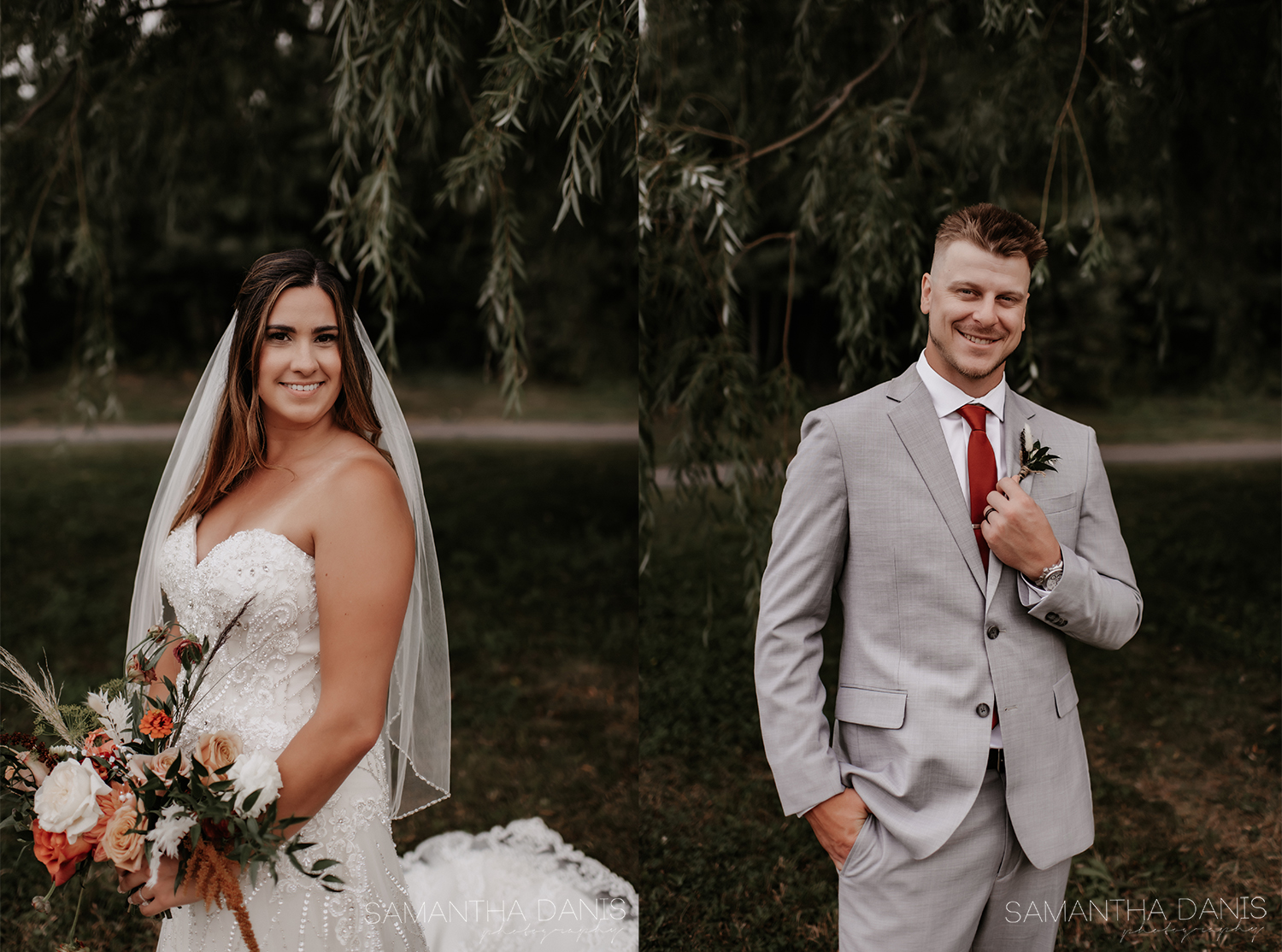 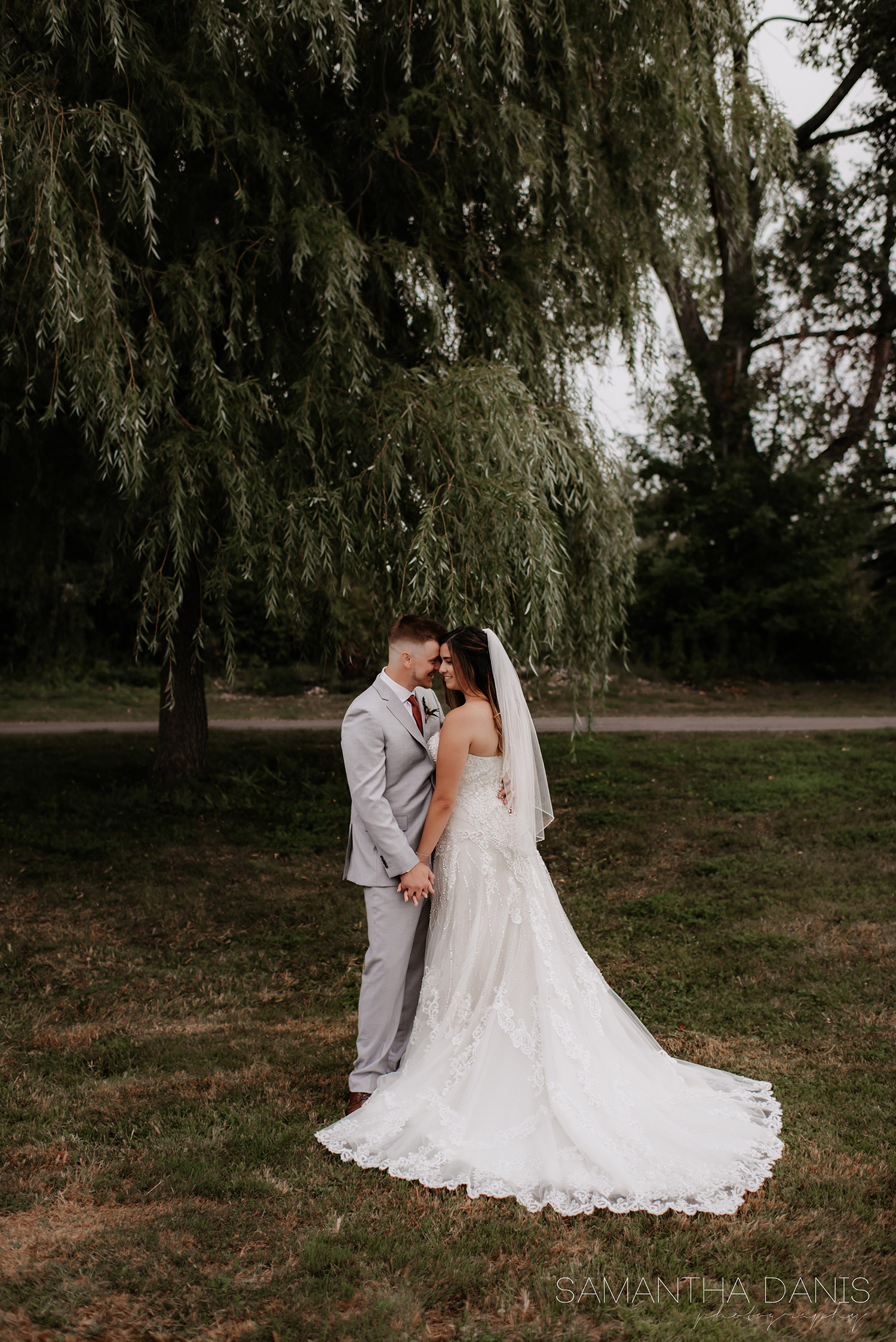 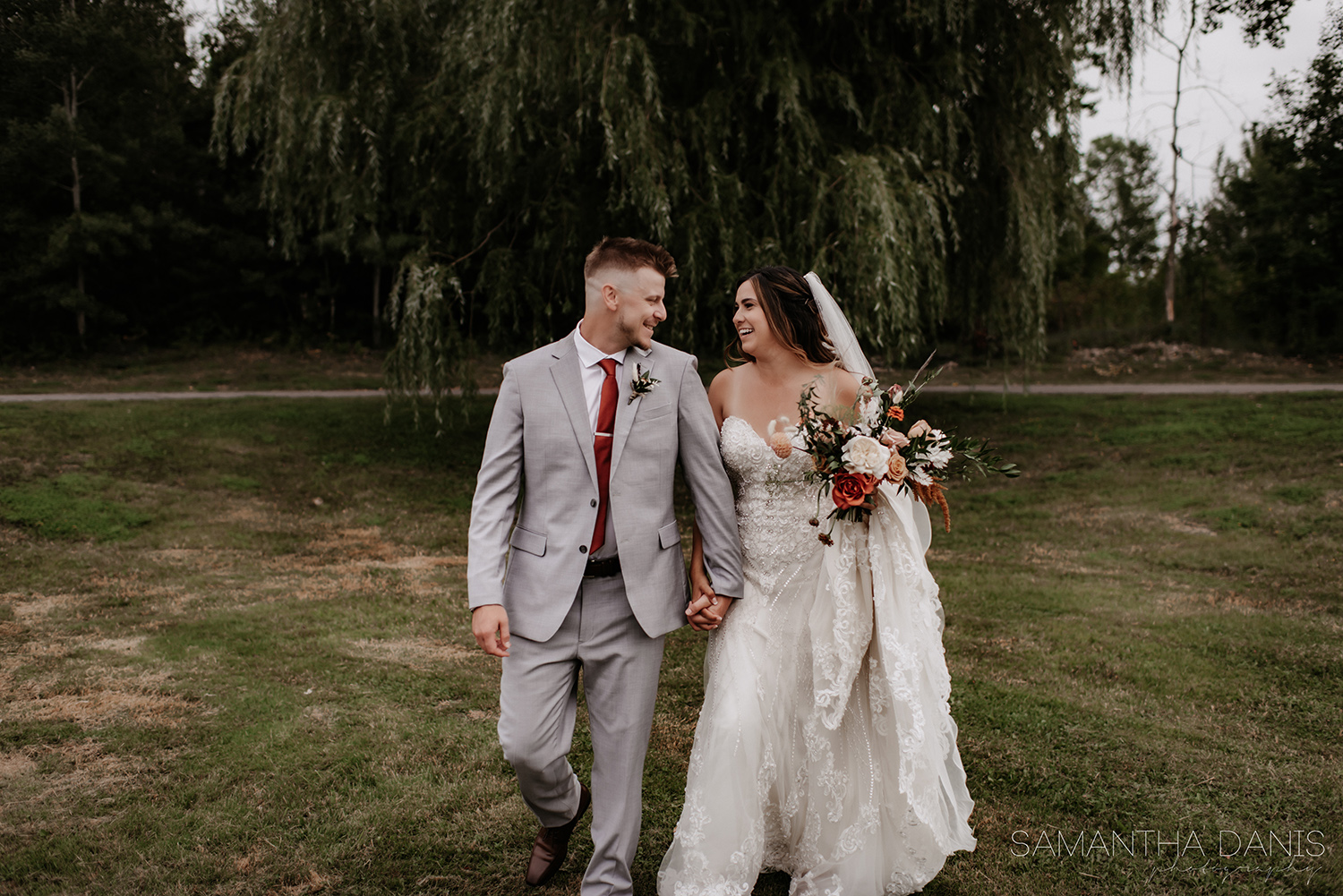 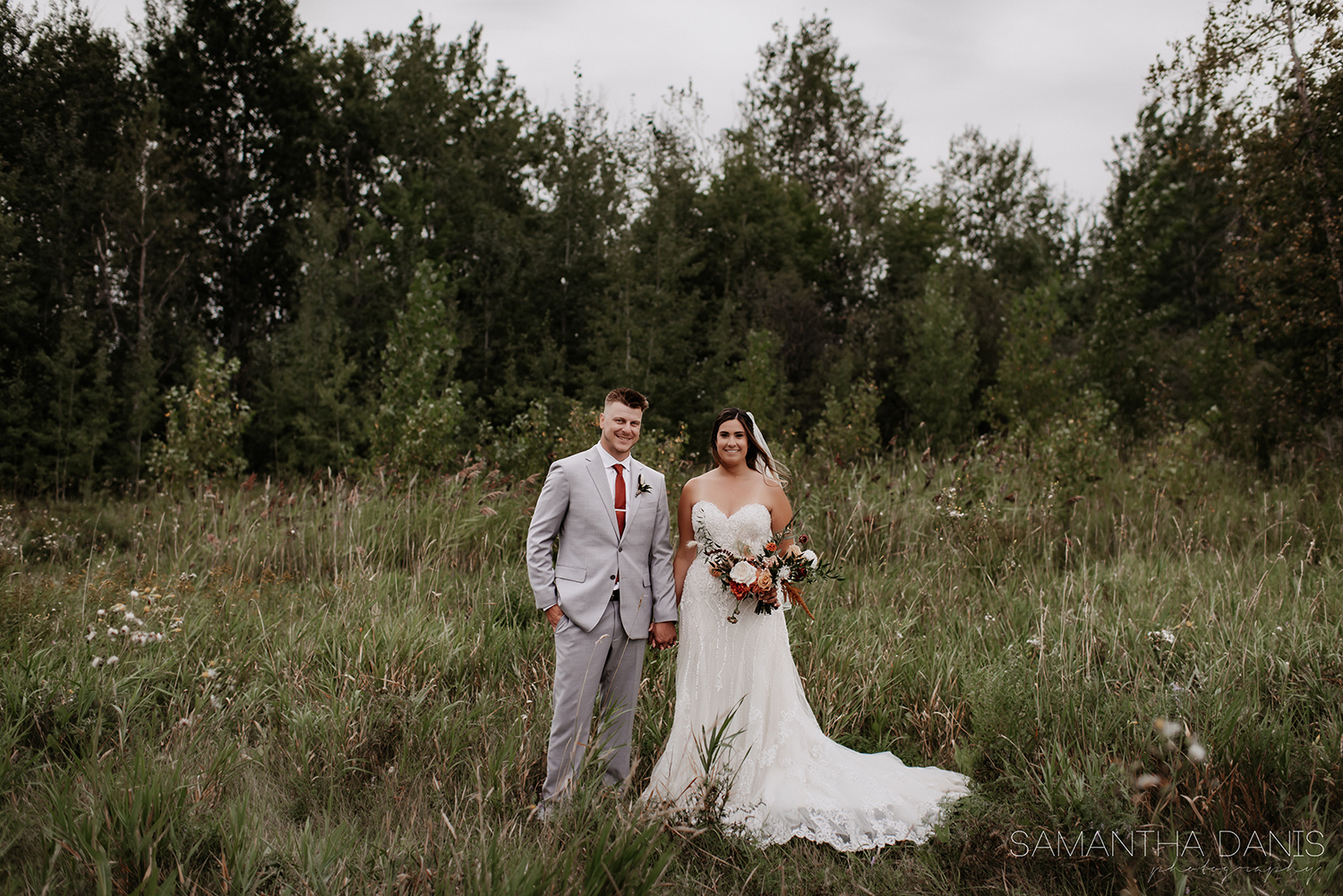 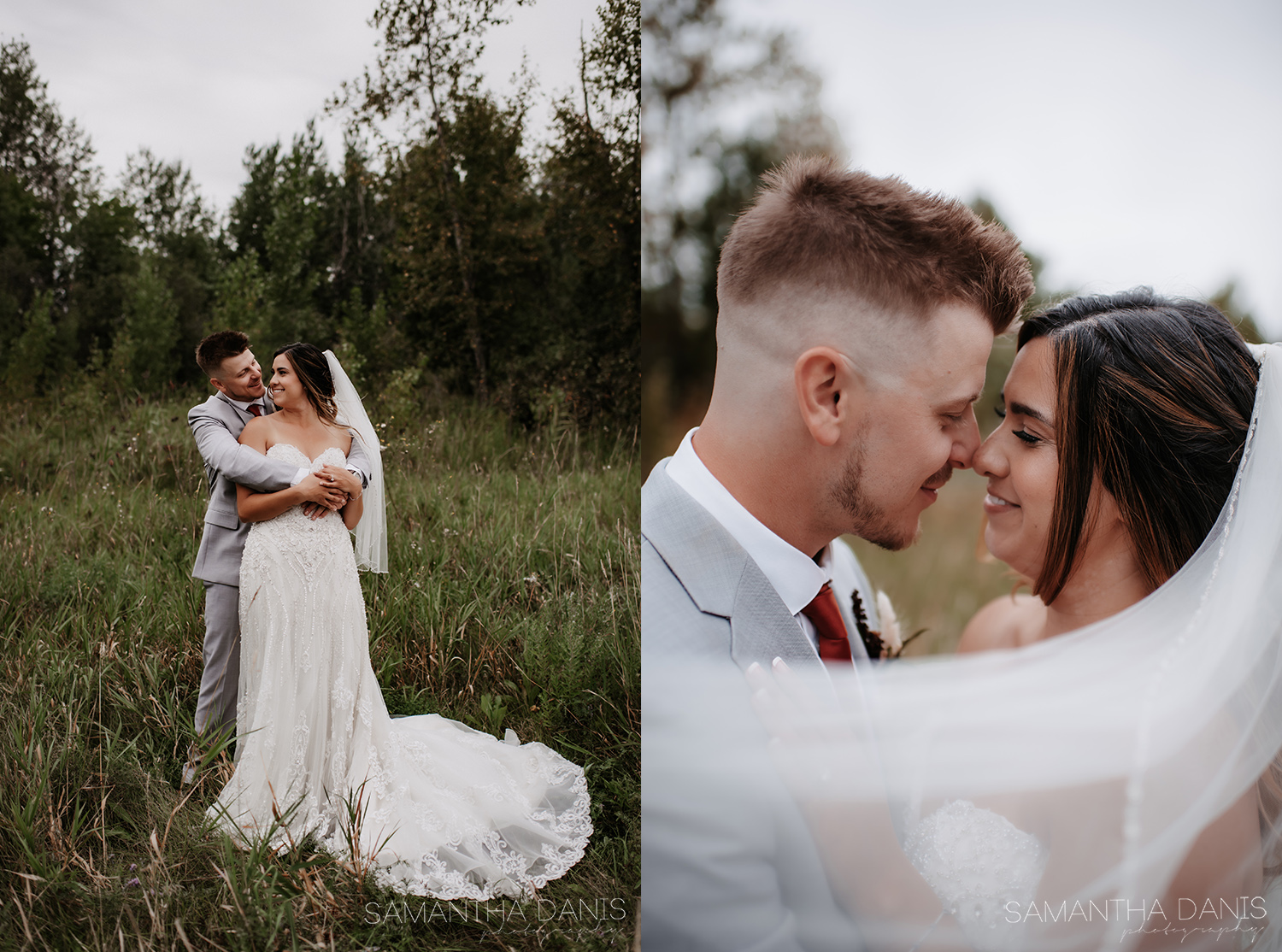 Side note, on our way back to that limo I saw a few people chilling in the bush. Turns out the wedding party really needed to pee so away they went. When you gotta go, you gotta go. The party on the bus was FIRE, lots of singing, dancing and dare I say, maybe even a little pole dancing ;). And the party didn’t end there. Oh no. The walk-ins to the reception space was literally the wedding party entering and doing one of the three shots options that were left as party favours for the guests. Literally everyone had shots. I mean, the table numbers weren’t even numbers, they were brands of alcohol. This crew definitely knows how to party. 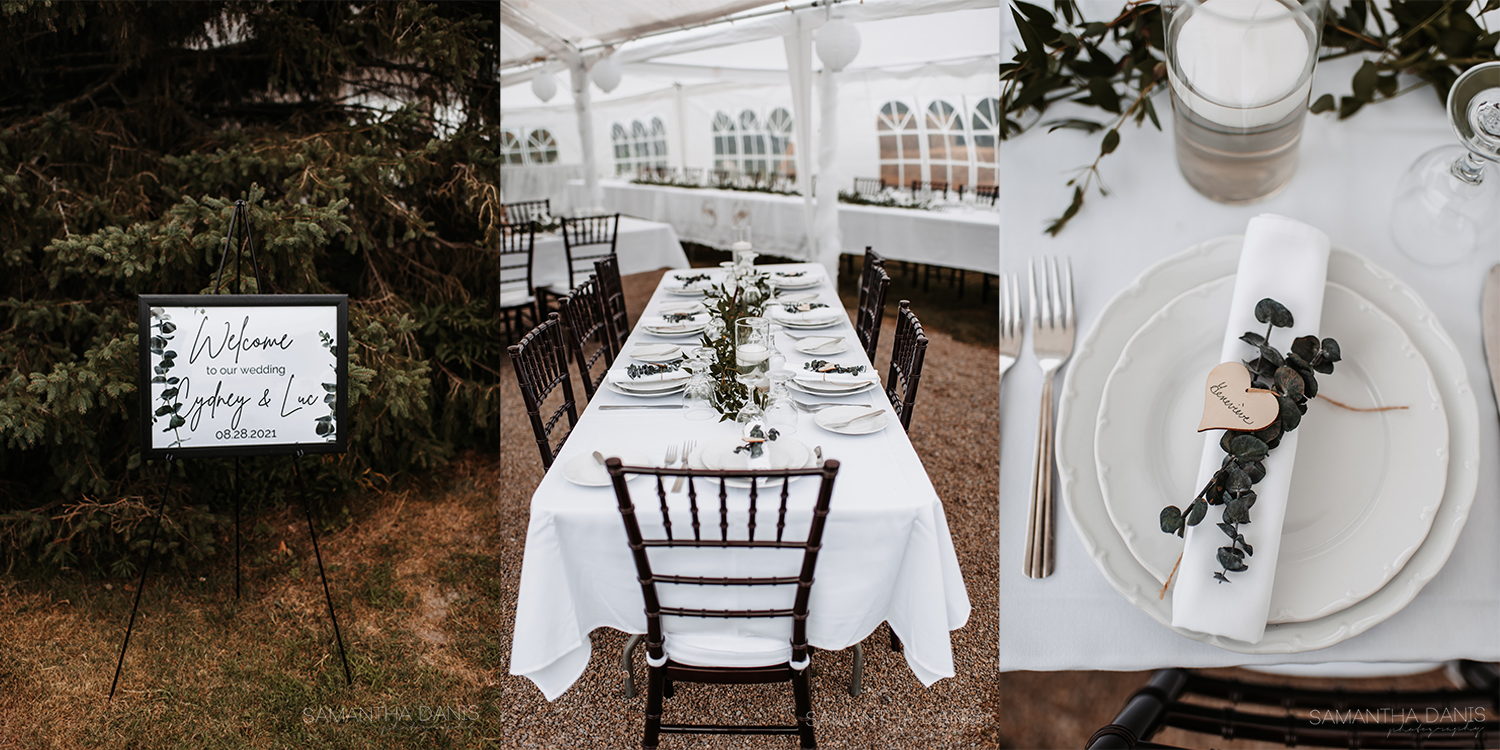 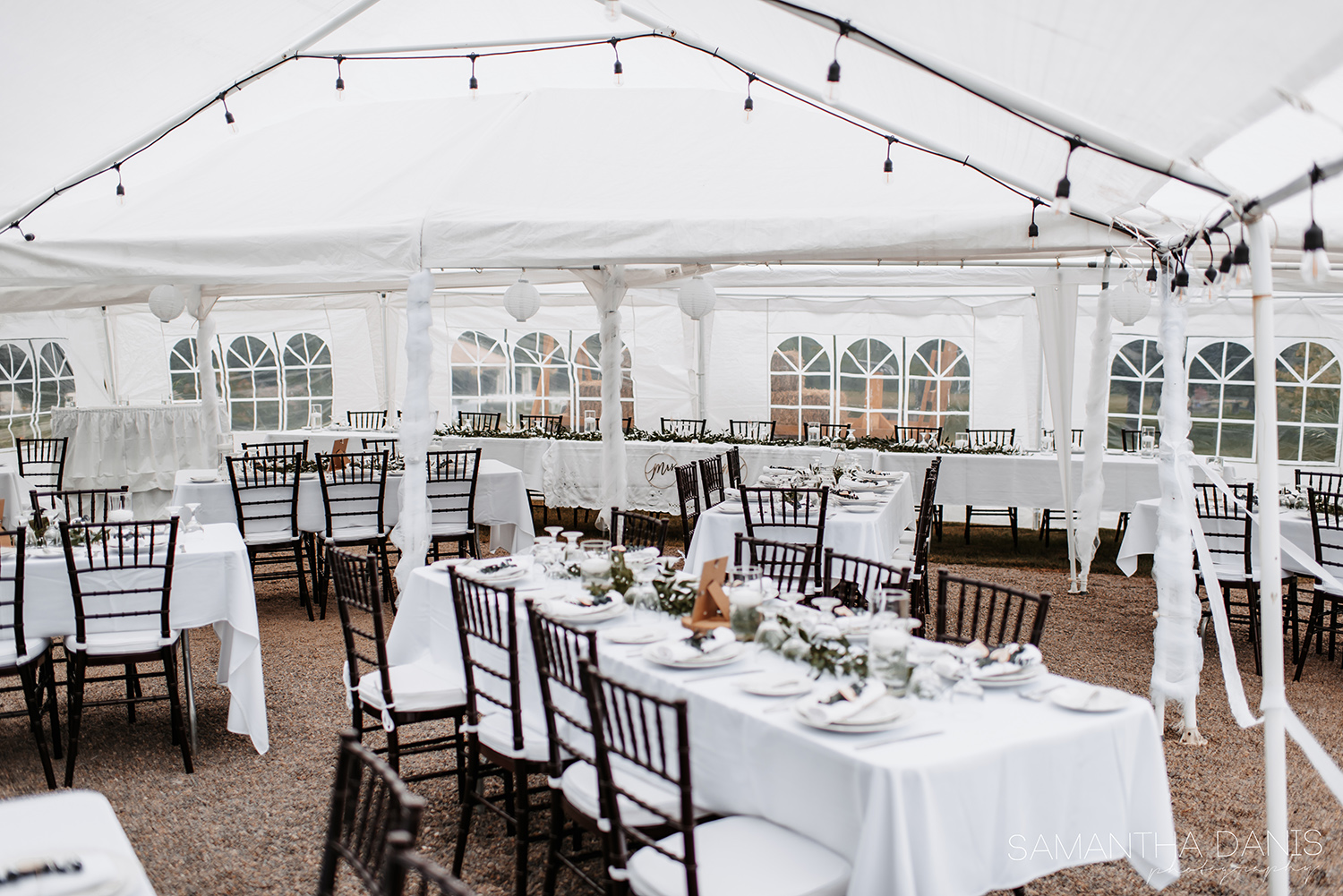 The evening was perfect. The décor was perfect. The flow was perfect. It was just all around a wonderful night. Things started off beautifully with the first dance which was quickly followed up with the first speech of the night. Speeches had everyone in tears from the get go. No literally, Cydney’s dad cried almost as soon as he got up to speak and of course made everyone else cry. The parents, they just know how to get you. All the speeches were good, they always are but the one that got me the most was Eric’s, the Best Mans’, speech. Boy did he put work into it not only praising Luc for the friend that he is, but also tooting his own horn while he was at it. All in good fun of course and it made everyone laugh. Just the vibes we were going for. 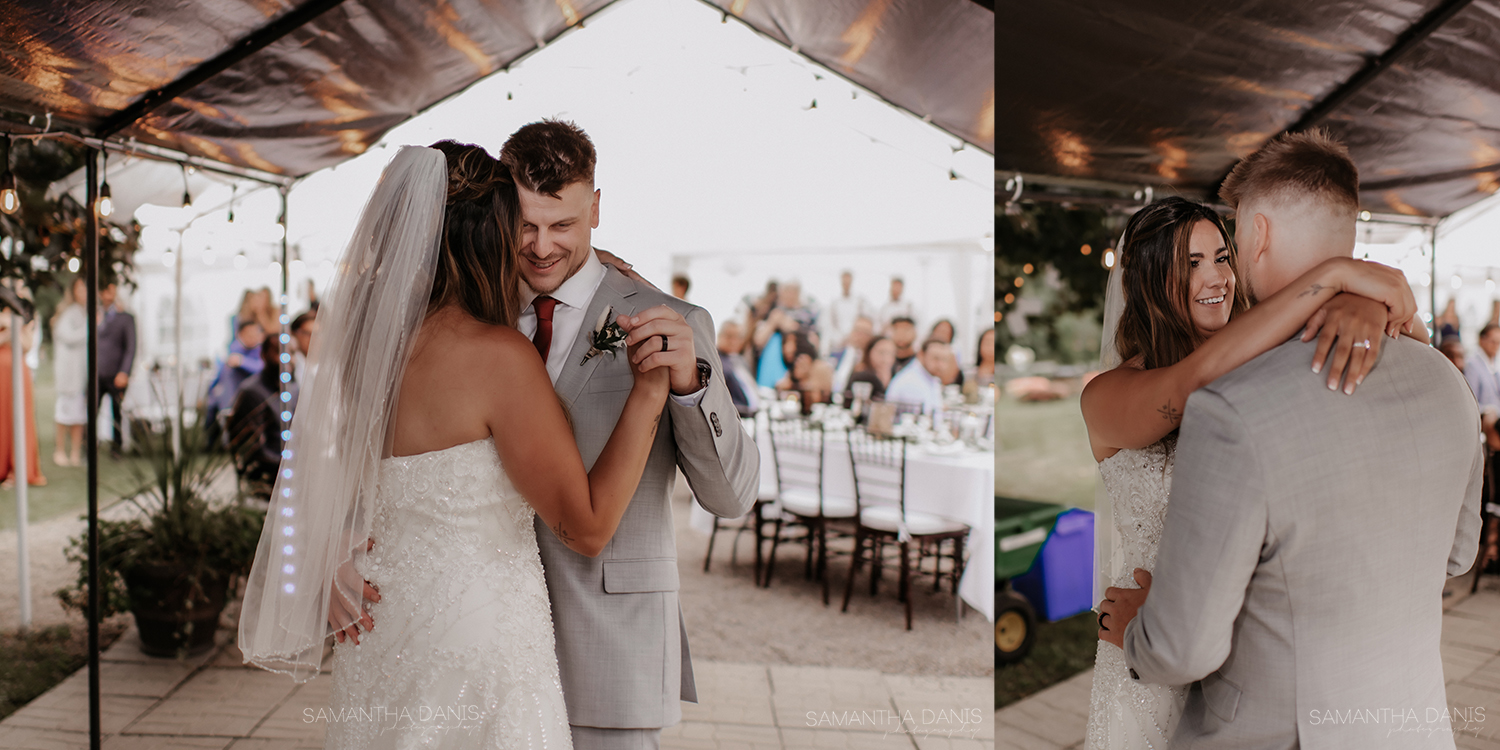 Once dinner was eaten and cleared away- Side note, the catering was Meating’s BBQ and it was delicious as always and the attendees-servers for the evening were actually friends of the family who did a SPECTACULAR job. It literally was 5star service. It was time to get the real party started and man, did this group know how to dance. I was there probably for a good 1.5hours of dancing and it never really stopped. So much so that even Kevin, the brides shy brother, got into things and shook his booty on that dance floor. It was honestly such a blast, I had an amazing time dancing with everyone and just getting on that level. It was seriously the perfect way to end the night. They had called for rain, even storms all day but none of that hit us… not until I left anyways haha. But I’m sure whatever came their way, they just went with it and enjoyed their evening as Husband and Wife.

Cyd and Luc, you guys are freaking amazing. Your families and friends are also amazing and your day was one for the books. Thank you for being such a cool couple and for inviting me on this adventure. I’ll cherish this day forever. All the best to you Mr. and Mrs. Forget! Xox

Today is rainy so I’m looking back on Kendra and

Go with the flow🤍 That was Kendra and Ali all

Off to another wedding today! Another beautiful d

Walking into the weekend with a big smile on my fa