I GOT EATEN ALIVE BY MOSQUITOS! But it was totally worth it to get all these magical photos with Claudia, Brendan and their dog Oscar. I knew I was in for a fun photoshoot since these two are both Firefighters and of course I was right about that one. Alright, so when these two met with me in 2016 they didn’t have a date or venue of course but they were so eager that I let them book me with anticipated dates. They finally decided on a venue and date for 2017 which was exciting because we were months away at this point… A few weeks later I get to an email from Claudia saying they changed their date to 2018 which again was totally fine with me and another few days pass and the date changes again. But this time it was official, July 14th 2018 is it guys, they’re getting married!

Fast forward to this summer, we planned the engagement session for May. But with all this strange wet weather we were having we had to re-schedule to June. June comes around and whoops, weather is once again non cooperative so we re-schedule to July. Something happened along the way and we had to re-schedule again so August it was. The day of our planned session it torrential down poured so once again….We re-scheduled.  This time though we set up a engagement shoot date and backup date. September 11th comes along and we got SUNSHINE AND WARMTH! It was finally the perfect day for us to shoot. I drove out to Osgoode only for Claudia & Brendan to drive me into this overgrown field with a hidden barn in the back. This is where these two are actually going to get married and as much as it’s an overgrown field right now, I can absolutely envision all the work they’re planning on putting into this. For the time being we decided to focus on the field with the gorgeous sunset we were getting in that very moment. We had some fun dancing in the light, snuggling and stealing some kissing (Well Claudia and Brendan did all of this of course). Claudia asked for only two specific photos, photos of their firefighter equipment and photos with their dog Oscar, the Weiner-Husky. So we made it happen on top of so many other beautiful images. Oscar ran around the property and paid attention for about ohhhh two seconds but it was just long enough to get some cute family photos. Brendan also wrapped his beautiful fiancé  in his firefighting Bunker Jacker while whispering sweet nothings in her ear and giving her many many little kisses. We ended the session with a little Piggy Back Competition… Brendan got Claudia up on his back no problem and walked to me but when Claudia took on the challenge of putting her fiancé on her back, well I had no doubt in my mind she could do it. I didn’t think she could walk with him, and originally neither could she but the second she had him up there she did exactly that. She walked with a big grin on her face towards me as they both laughed so loud. Think it was the first time they tried that one? Haha! All in all we had a great time getting eaten alive by mosquitos, talking and running after Oscar. I seriously can’t wait to see this place transformed next summer and to utilize that gorgeous barn. But until then you get to view these two beautiful people in their engagement session sneak peeks below xo 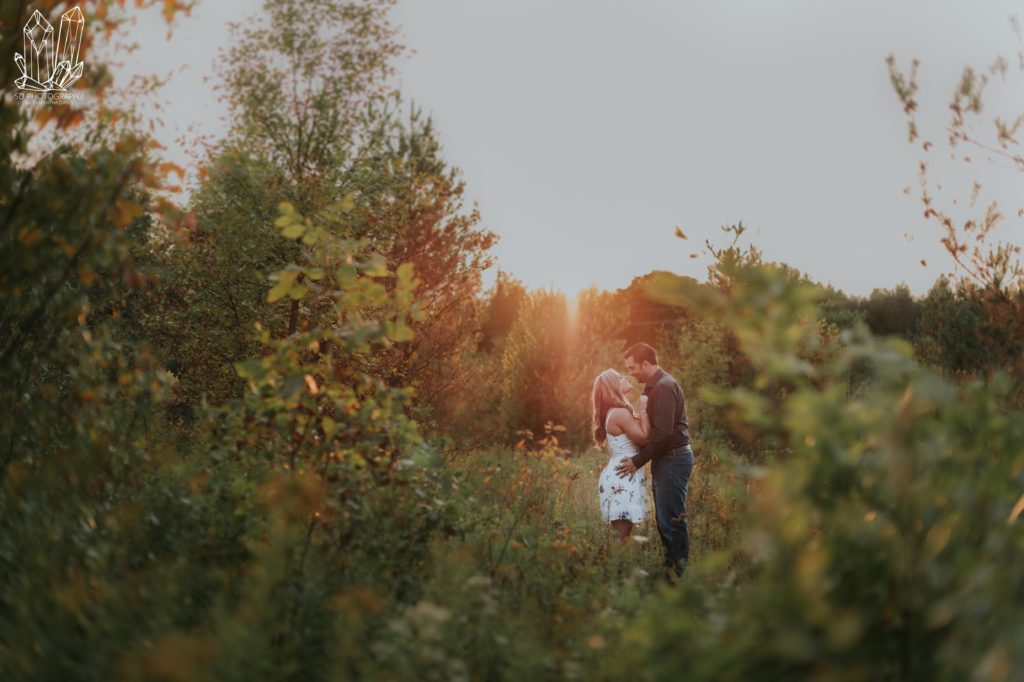 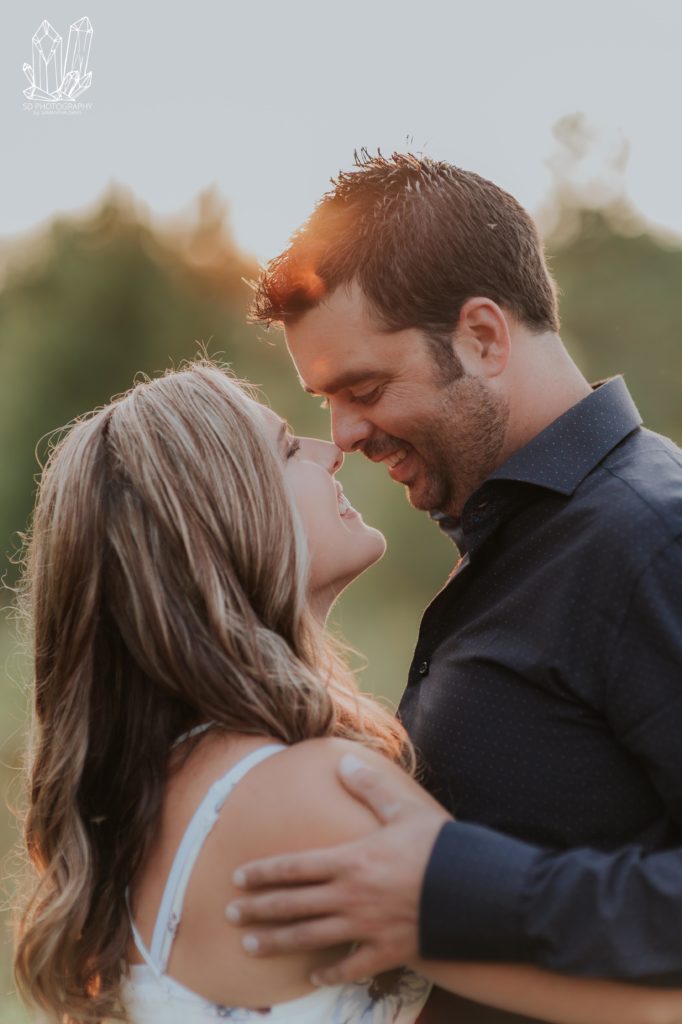 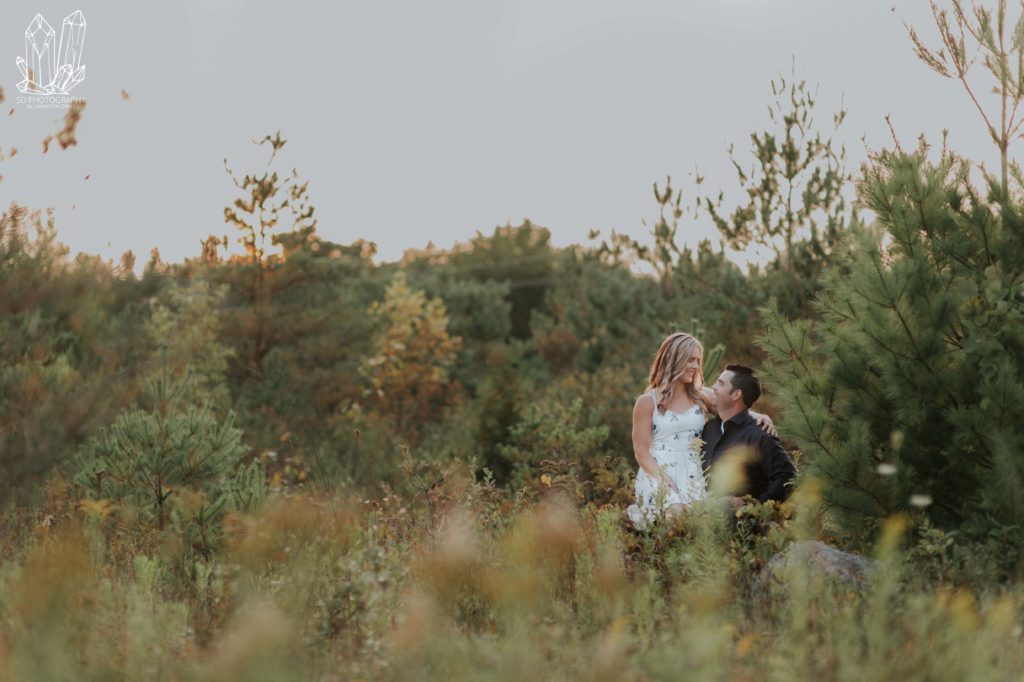 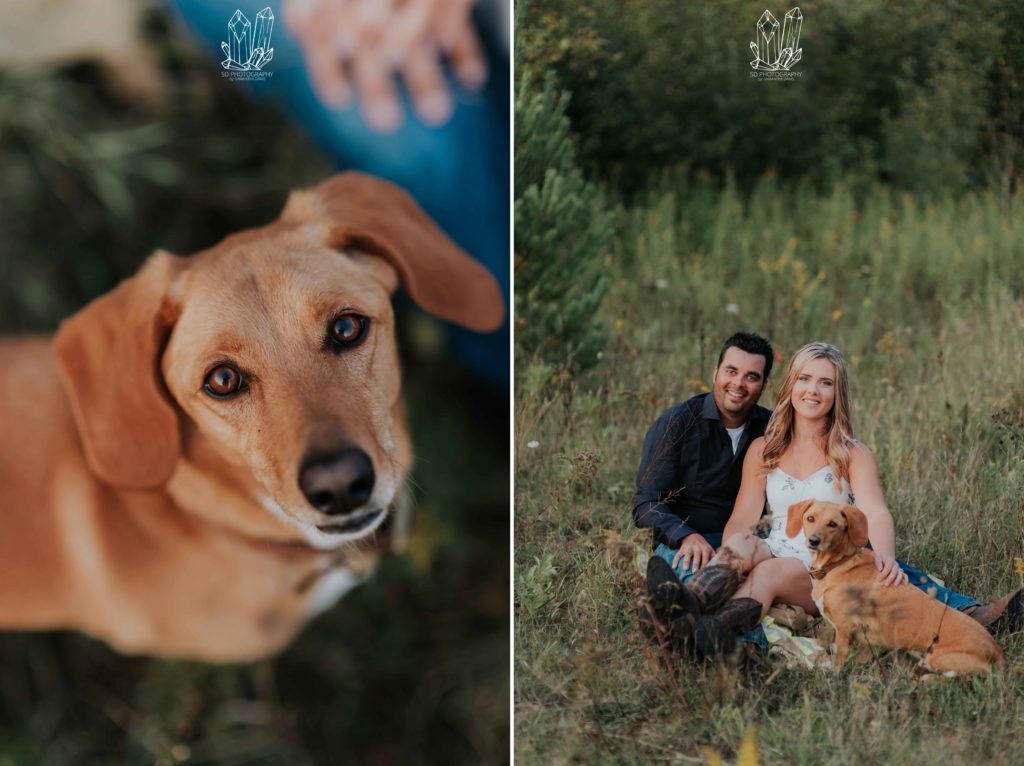 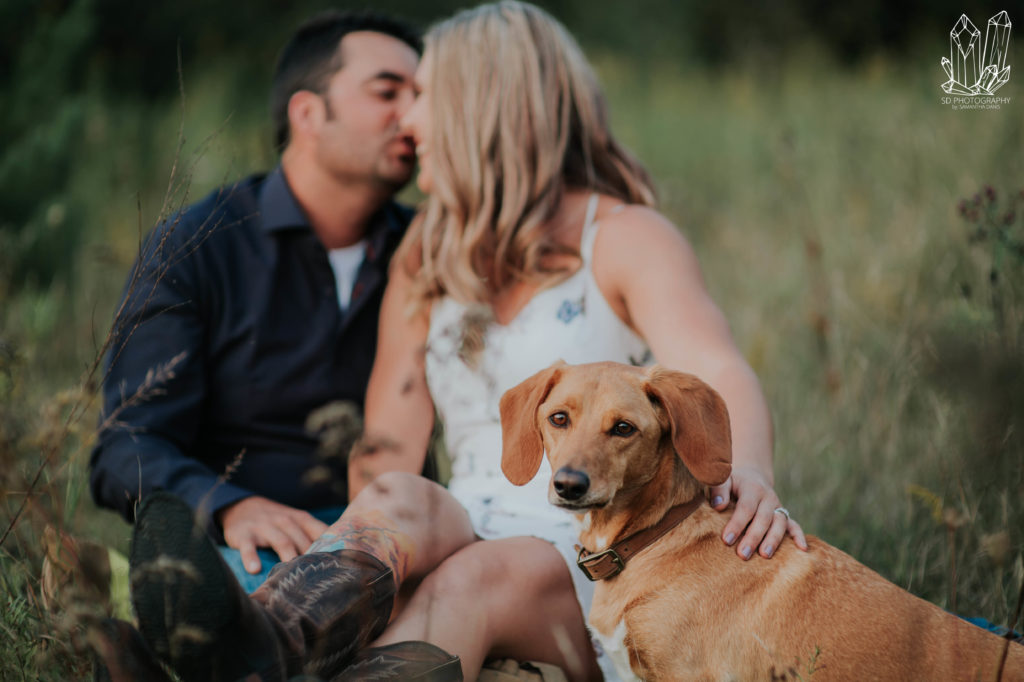 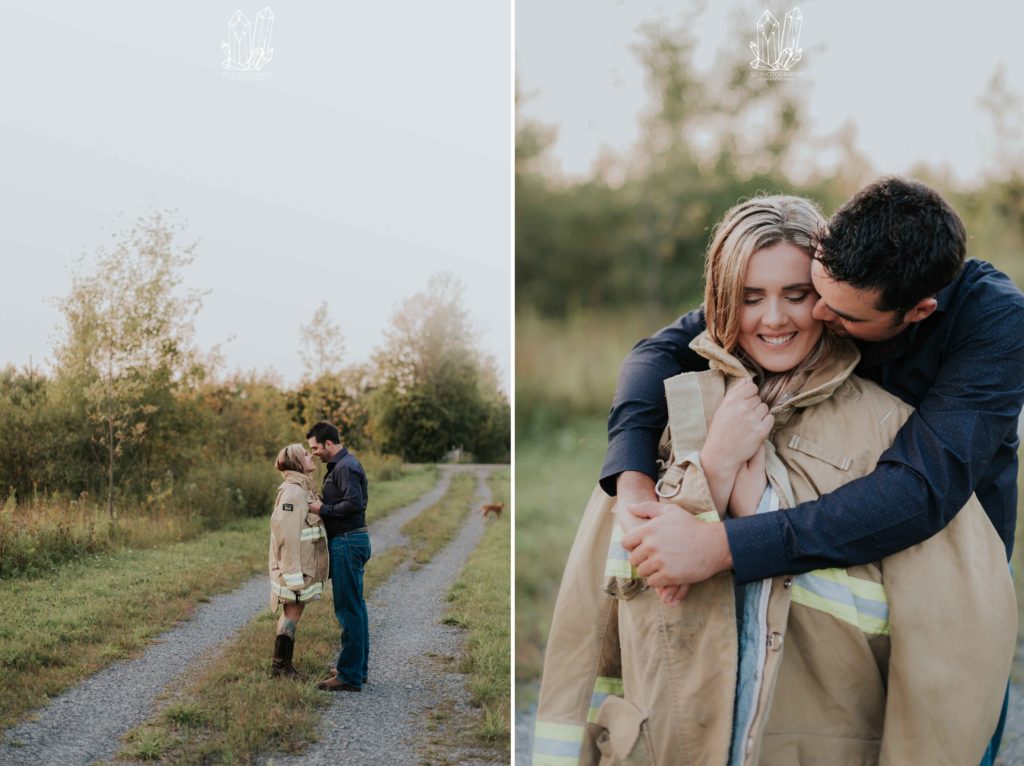 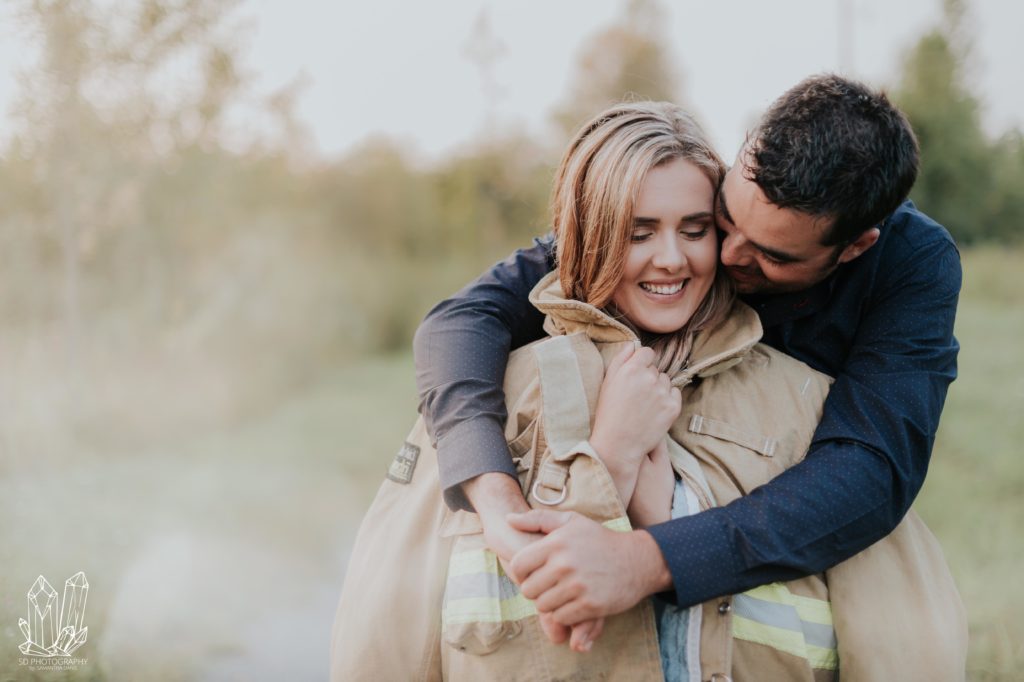 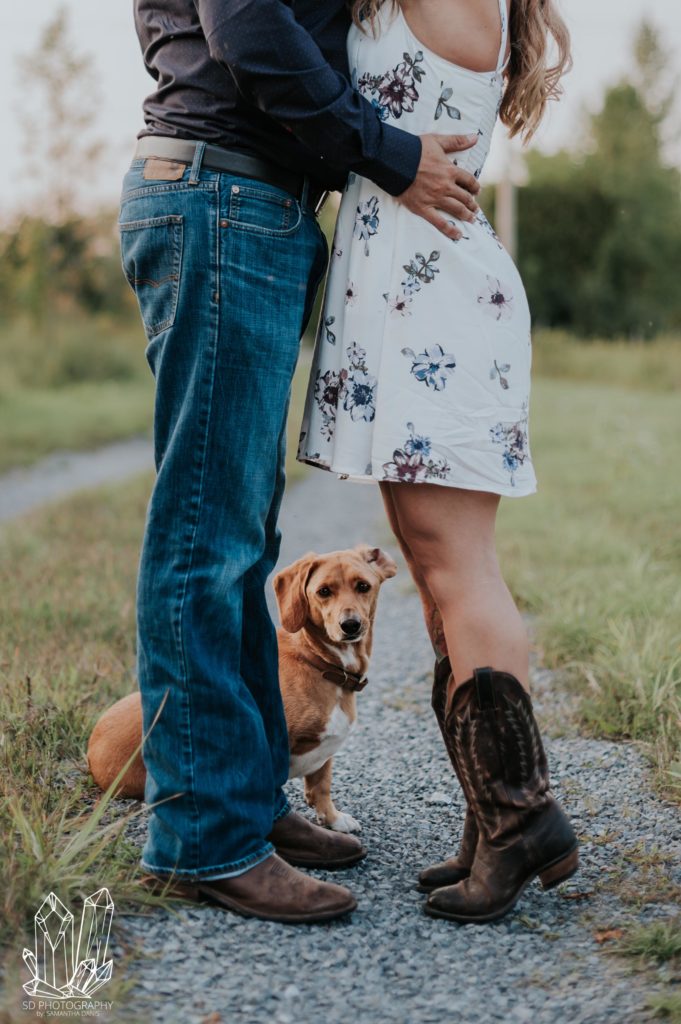 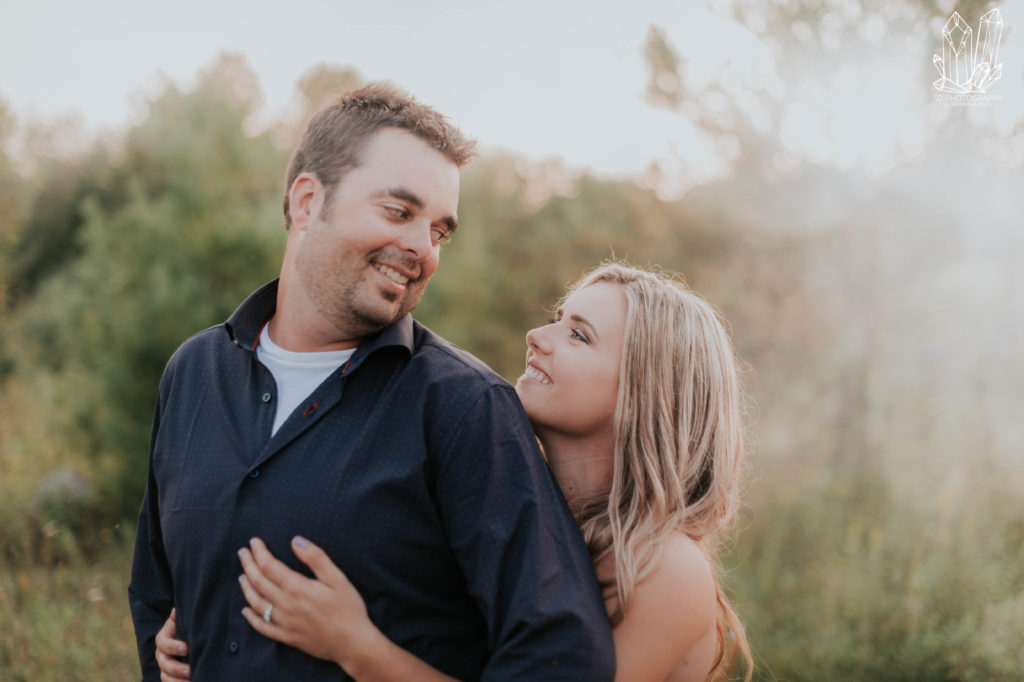 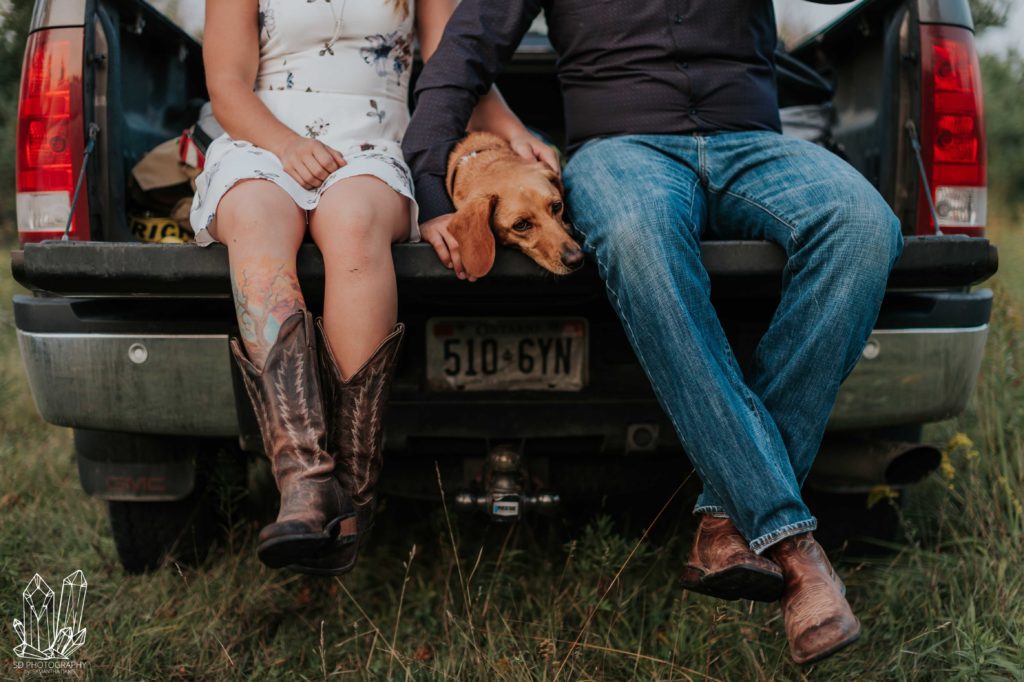 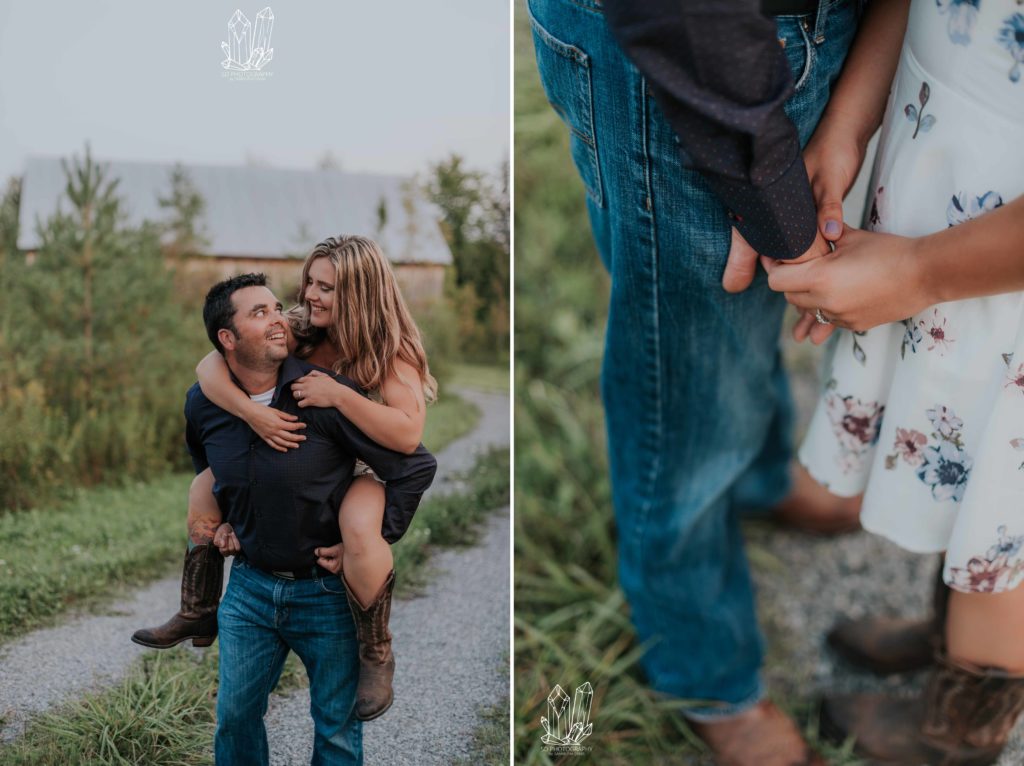