When Claudia and Brendan booked me in 2016 they didn’t have the exact venue planned out. Then in 2017 we did their engagement session at an old barn in a an overgrown field which they said would end up being their wedding venue. Fast forward to 2019 and here we finally are! After some re-scheduling and the birth of their baby girl it was finally time for them to get married. Let’s call this one the Osgoode Backyard Wedding! I was supposed to start off my day immediately with the girls but I decided to leave early and head on over to the barn to see how they transformed the space and boy was I pleasantly surprised! But more on those details later. After a quick hello to Brendan and the boys I made my way over to see what the ladies were up to. In uncommon wedding morning fashion, they were all just quietly hanging around on the couch whispering. They told me Summer (Claudia & Brendan’s daughter) was sleeping. So I opted to head outside to get a couple shots of Claudia’s dress (also to run away because lord knows how loud I can be). There was nowhere to really hang the dress to in true Claudia form, she whips out a hammer, climbs a table and makes one for me. I love me a hands on bride! The wind was strong and the dress wouldn’t stay still so we quickly moved back indoors where baby Summer had finally woken up. After some giggle with the baby and detail shots it was time to get everyone dressed. The ladies squeezed into their dresses followed by Claudia getting into hers with the help of her big sister Michele. Her dress was so stunning, one after my own heart. Beautiful criss cross strap detailing int he back, lace bodice and of course a horsehair skirt, it truly was beautiful and Claudia was glowing in it. When you have a baby or child, you’re not only a bride on your wedding day but still a mom of course and immediately after getting dressed Claudia went into mom mode. She got baby Summer and put her into her own beautiful cream coloured gown and floral head piece. They were absolutely adorable together. And just as quickly as I arrived, I was off again to see the boys at the venue. 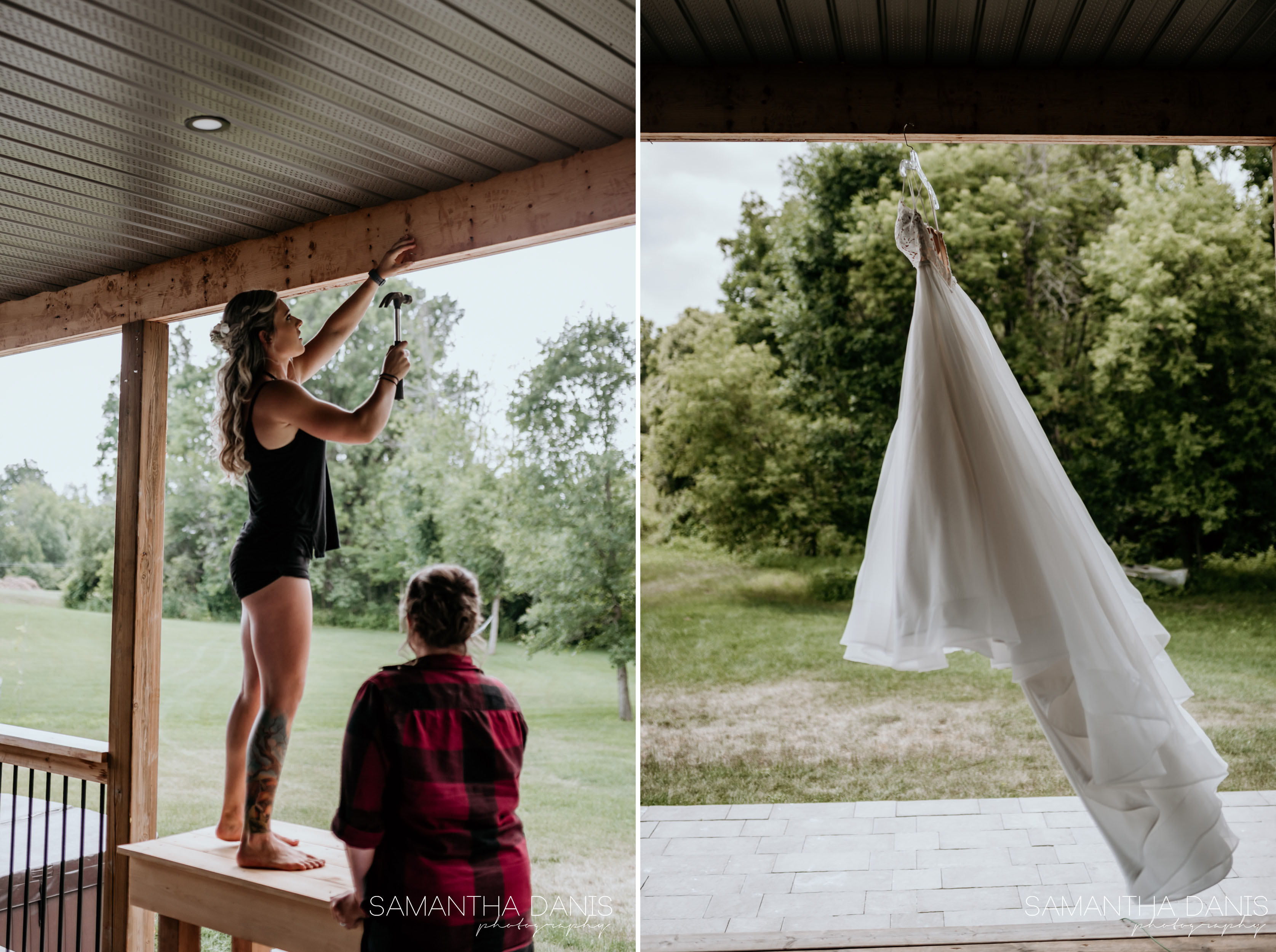 Claudia and Brendan don’t do things like everyone else. Not only did they find a barn and transform it into their dream backyard wedding venue, but they also had trailers on the property where the boys got ready! Safe to say these two like it country. When I got to the absolutely gorgeous trailer Brendan and the boys were in, I was surprised to see them still in their shorts and walking around shirtless, after all the first look was suppose to happen in ohhhh 10 minutes! They hopped right to it and within 15mins they were set and ready to go. I brought Brendan out for the first look and went to get Claudia who was patiently waiting in the air conditioned car. When she jumped out, I explained to her that she was going to walk behind Brendan and then she could tap his shoulder, give him a hug, what ever she likes. She was quick to reply; ”I’m going to grab his butt.” Well alright then, I’m alright with that haha. I put myself in position to be able to capture her walking behind him and then I would move to the side to get his reaction but damn girl was so fast she actually ran to him and grabbed him! I almost burst out laughing at her excited. First looks are usually full of nerves and quiet but this one was something else. Brendan did a great job at holding his emotions in but his smile said it all, and so did Claudia’s. They were just so happy in that moment. After a few moments of ogling each other we proceeded with some photos with beautiful little Summer… Except that Summer didn’t really want to take photos but that’s to be expected of a little one. We got a really cute one of all three of them together and then each of them individually and then off we were to get wedding party formals. 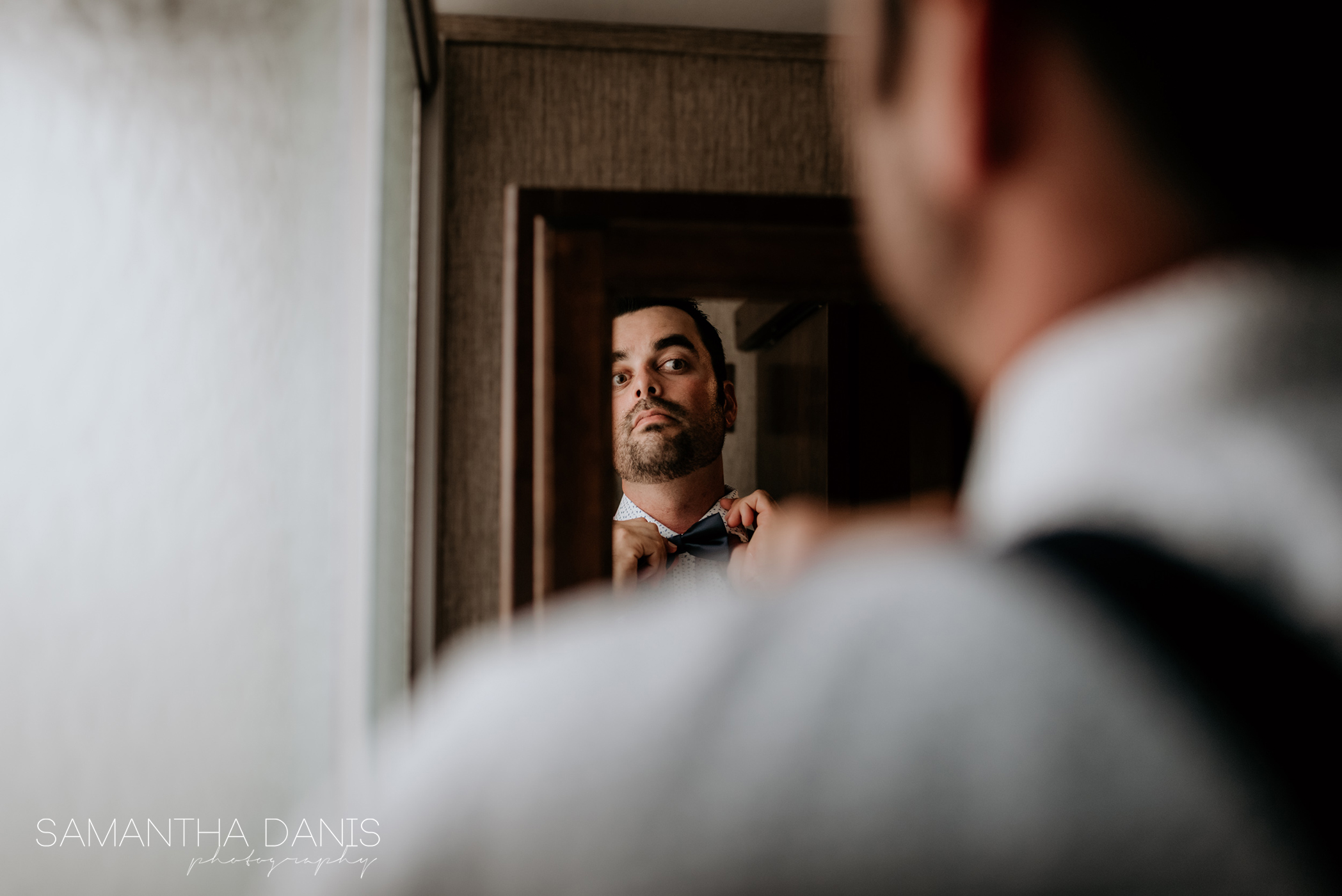 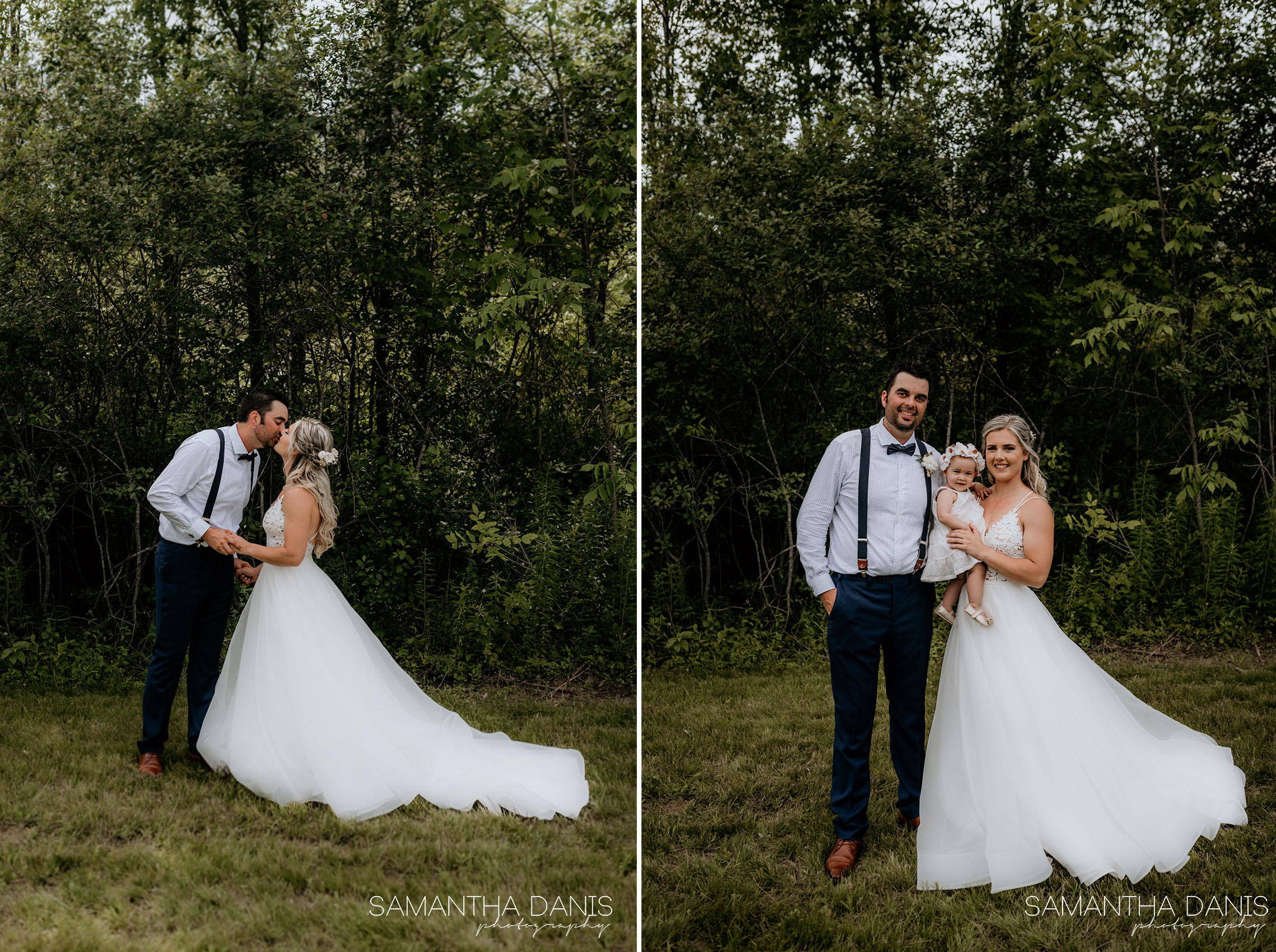 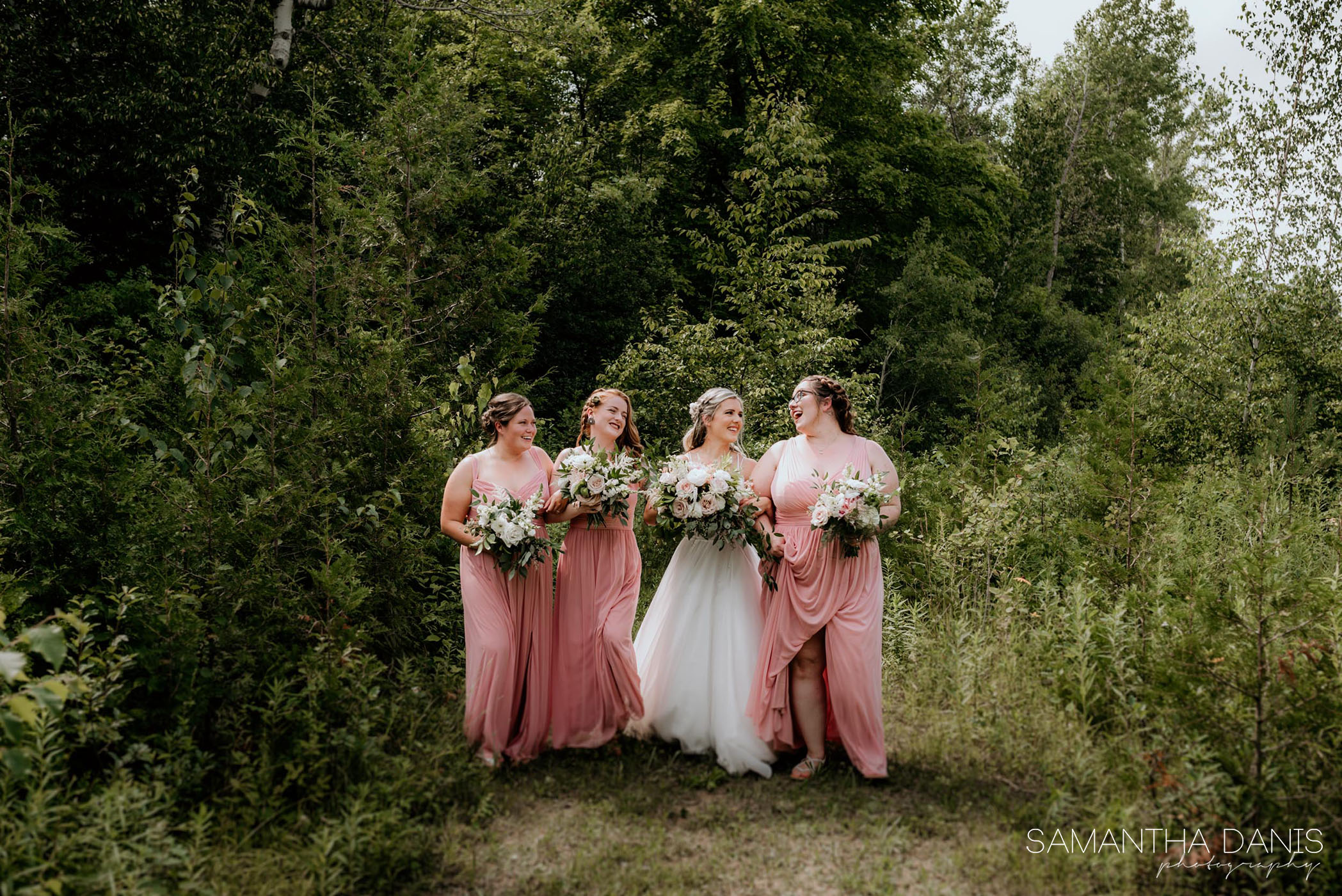 The ceremony space was on the outside of the barn with a combination of white chairs and hay bails for seating. The aisle was lined with shepherd hooks and beautiful woodland sunflowers (I think) and the front was decorated by some lattice with vines growing up it along either sides. We got lucky because the harsh sun decided to hide for the entire ceremony as a big ole dark storm cloud rolled in. Summer walked down the aisle with Holland the super cute flower girl and Brendan tried to make her walk because near the end there she just stopped but eventually she had to be carried to here aunt, no crying though so that’s definitely a win! Everyone looked so beautiful walking down the aisle but when Claudia came around the corner with her dad it was all eyes on her. Brendan kept his composure and only the smallest smiles came through. I’m thinking he’s like me in the sense that if he even let one big smile through the tears would have started to flood then and there. The ceremony beautifully officiated by Claudia’s brother and it has to have been of the fastest ceremonies I’ve ever witnessed! Their vows were funny and sweet. Claudia went the funny route to keep things light but her promises were true to heart while Brendan went into an immediate puddle of tears for his and went a little more serious and deep. Claudia later told me that she though he might go slightly funnier with his so she decided to do the same, surprise! Their ring exchange was funny as well because Brendan’s ring went on without a hitch, Claudia’s on the other hand wasn’t really a fan of the heat I think and just wouldn’t go on. So much so that she actually put her hand down and pushed on on very strongly herself, it eventually made its way on haha. And with a kiss and triumphant arm raise, they were pronounced husband and wife! They quick walked down the aisle hand in hand with the biggest smiles on their faces, glad to have it done. 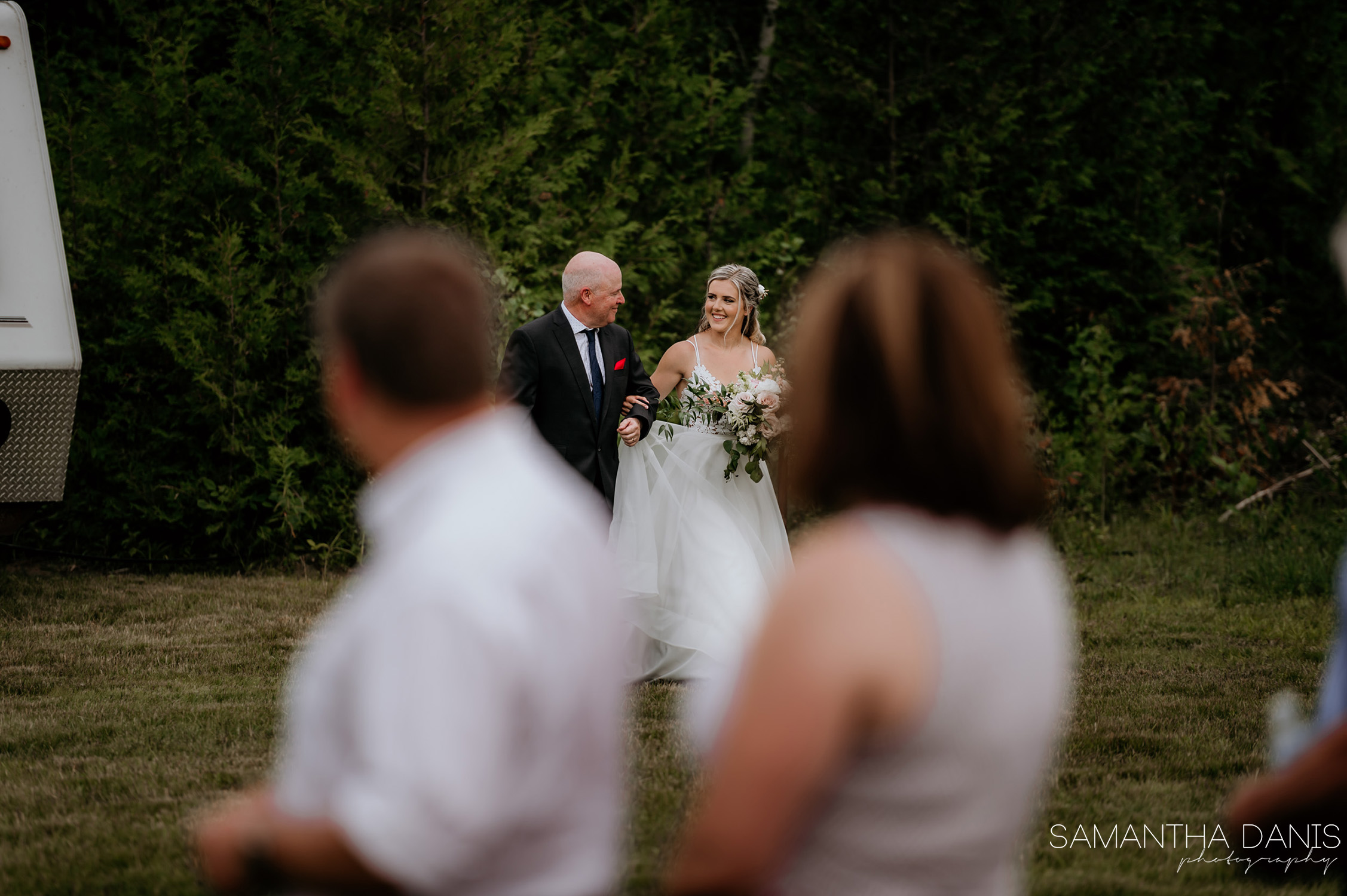 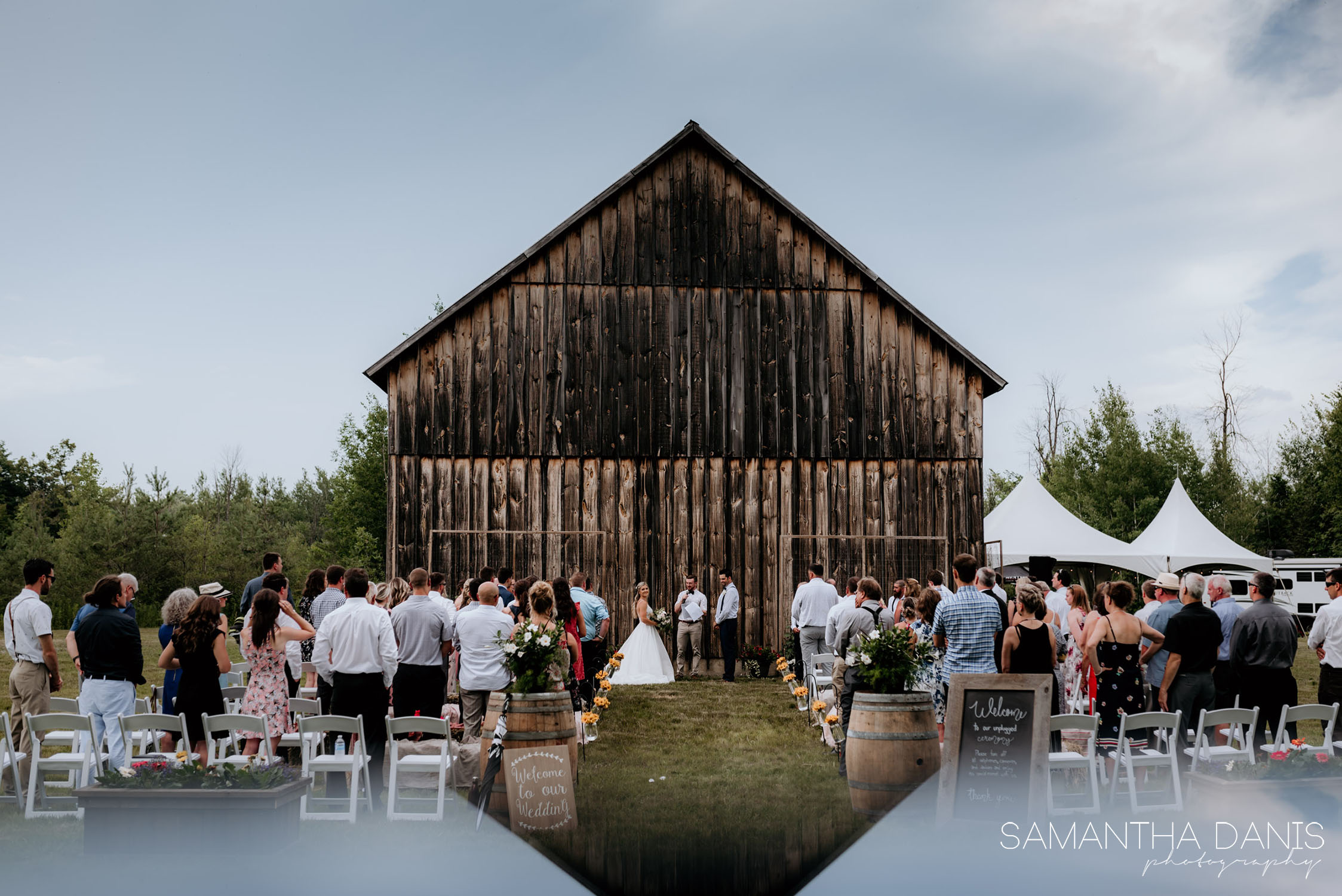 We quickly and efficiently got through family photos as the thunder started rolling in. I made the ultimate decision to get a few bridal party photos in but to quickly grab cover before the rain comes and what a call it was. I just had enough time to run to my car and change (did I mention it is was +45 degrees, yeah a change of clothes was necessary) before the rain started. I stayed in my car for a few minutes but quickly decided to run back to the barn because I didn’t want to miss anything. What I though was heavy rain was nothing compared to what started not even 2mins after I walked in. TORRENTIAL DOWNPOUR to say the least. Half the guests were in the barn while the others were under the cocktail tents. It was almost white out because the rain was so thick and then the sun came out and the rain eventually died off. But we got some serious water in those 15 minutes. Luckily Summer is like me and it seems like a combination of action, heat and sound of rain put her right to sleep in Grandpas arms. We wandered out for our last few bridal party photos and bride and groom shots before it was time for the reception to start. Something interesting about this day was the drastic change in lighting. From brutally bright direct sun, to beautiful overcast, to darkened skies, it was a whirlwind and I’m so happy I was able to capture all those different tones for these two. They absolutely deserve all the beautiful portraits. Being firefighters and all, their jobs aren’t glamorous and they’re saving and helping people so to give them something beautiful is the least I could do. 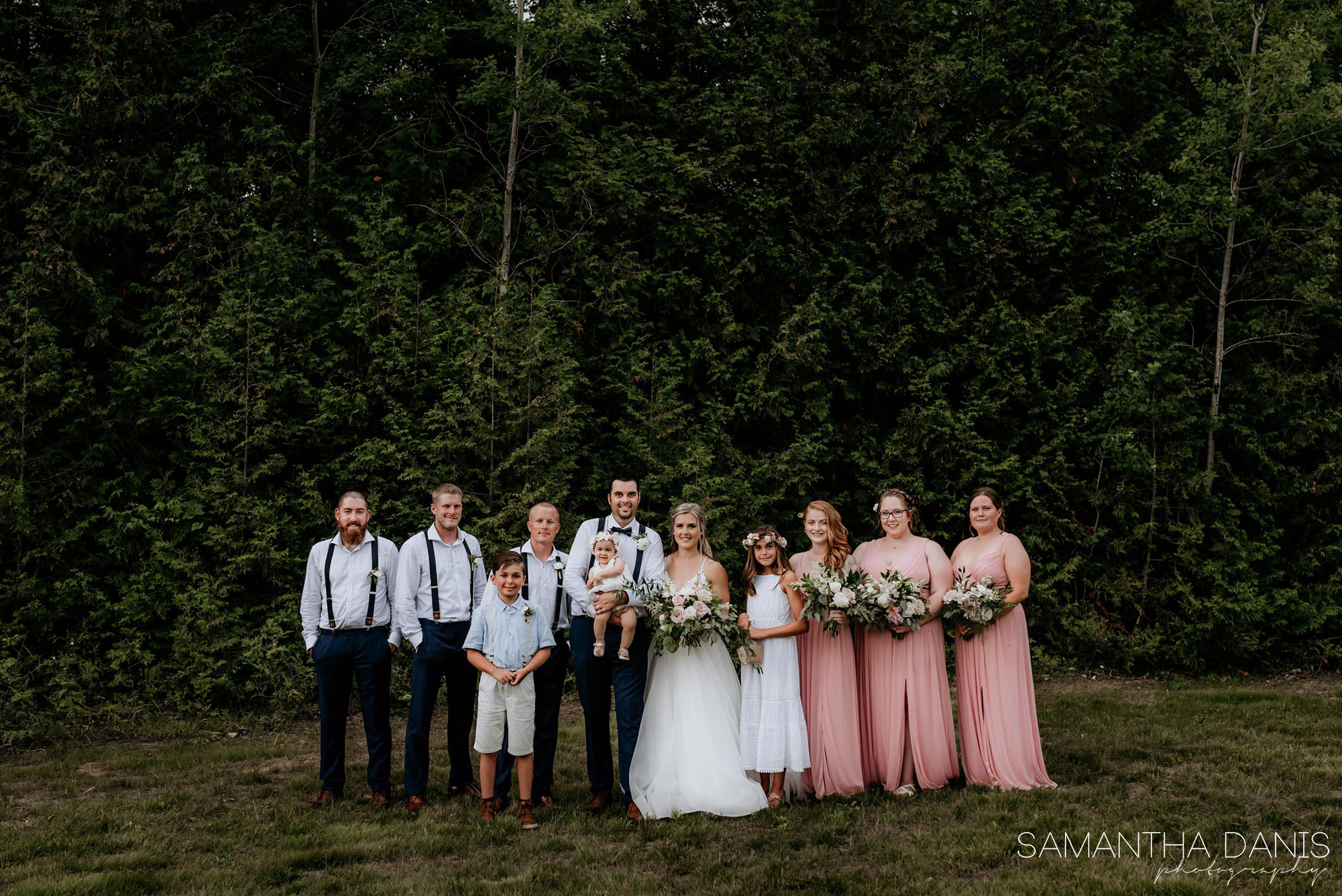 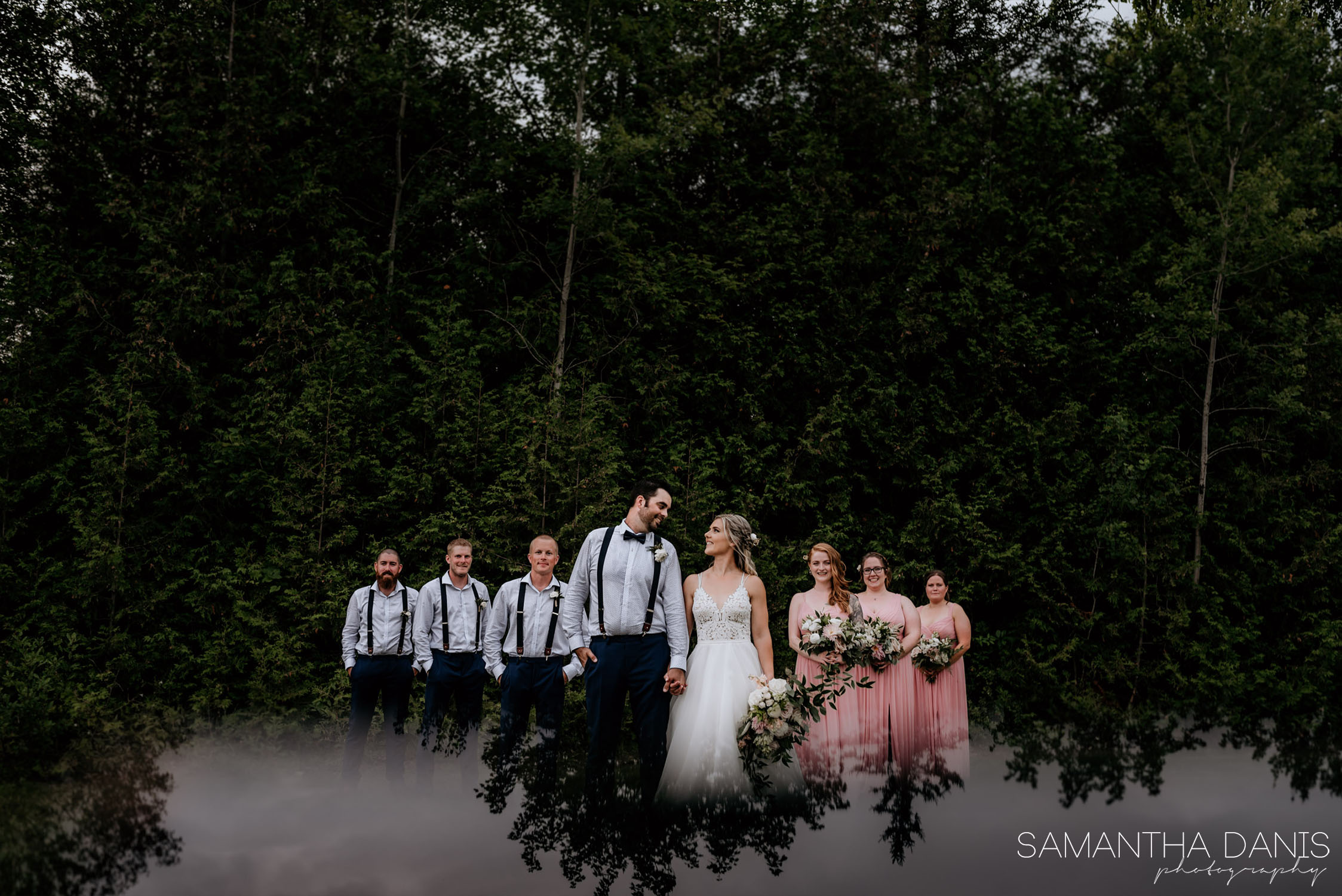 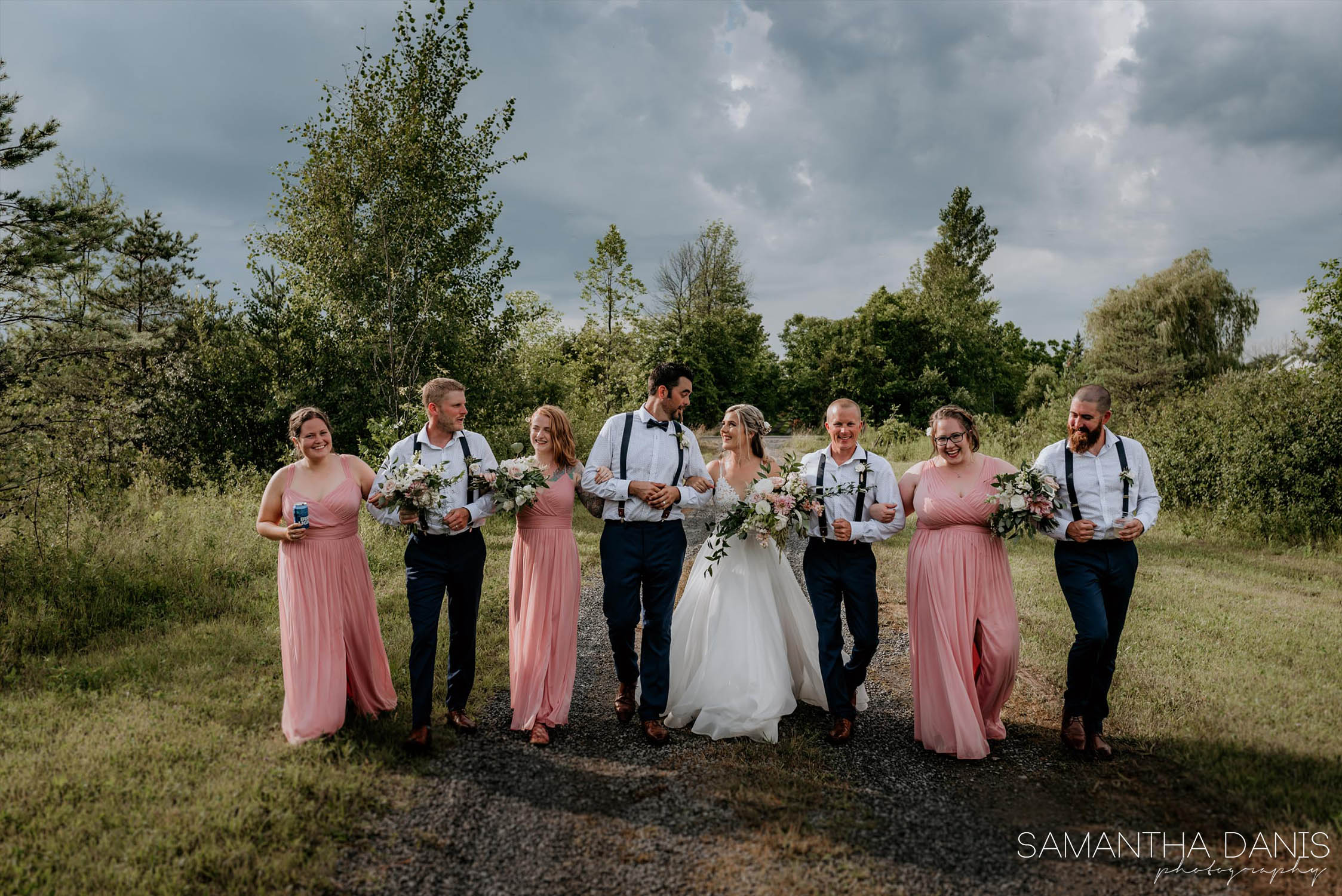 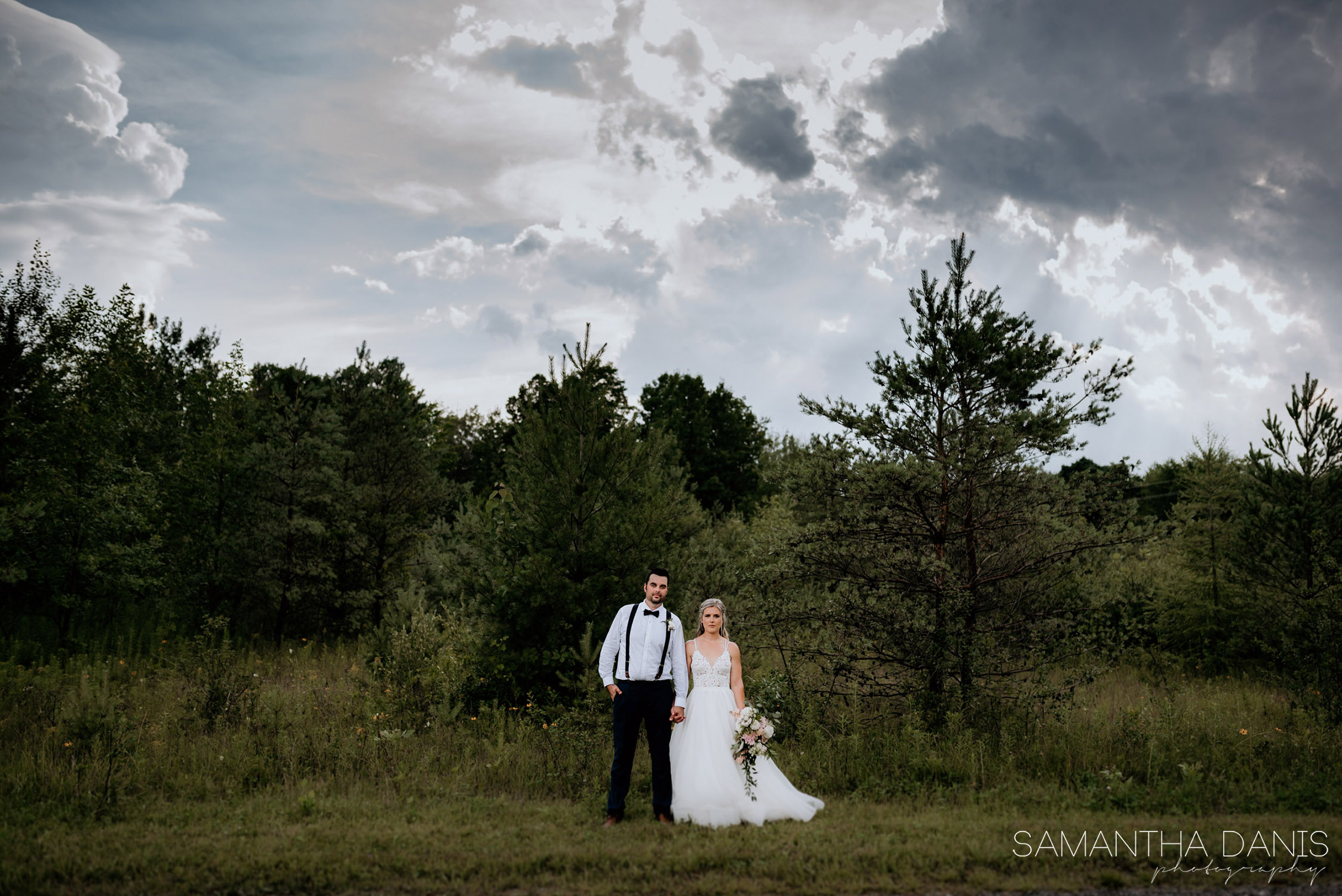 The barn was seriously so beautifully decorated (well done, applause to all who were involved). The tables were covered in white linens, lantern centrepieces with fairy lights and fake flowers, Edison bulb café lights strung throughout the barn beams and beautiful touches of greenery throughout. They also had a sweet table with photos of their lives and a hand drawn portrait of what I believe to be Brendan’s grandfather. There were wooden signs all over the place with beautiful calligraphy and sayings for the guests to enjoy, but I think my favourite part was ultimately the desert table. They had two huge wine barrels and a wood slab hold up their cake which was made by Claudia’s wonderful friend and unofficial wedding planner and these super awesome looking doughnuts by Doughbaby Doughnuts. The dinner was also a super cool bbq buffet style catered by the ever awesome Meating’s Catering. Basically, this wedding was a Backyard Barn Wedding dream. There were speeches by the best man and maid of honour, both sets of parents and then an impromptu one from Brendan’s sister. They were all kept short and sweet but ultimately the message was the same from everyone; Claudia, you are a kind and loving soul. Not only are you beautiful on the outside, but your heart is also beautiful and your family and friends know it and as do I. Your smile lights up a room and you’re obviously a fun loving lady. Brendan, you’re the rock in your family and you will do anything you can to help those around you. You are cherished and are the kindest most helpful person within miles and there isn’t anything you wouldn’t do for those you love. Ultimately, you two are absolutely wonderful and there’s no place I would have rather been on this very day than here with you. After lots of laughs from the speeches and of course some more tears from Brendan (which we learned he gets his emotions from his dad) it was time to hop into the first dances. Not only did Claudia and Brendan have their traditional first dance, but they also had a second first dance with Summer which I though was just the sweetest thing. I don’t think she truly understood why this was happening of course but it was still so sweet to watch. Right after their first dances though I spotted somewhat ”fumigating” the lawn around the barn and I looked at Brendan and asked him if he was down for one more sweet nightshot and he was all for it. We rounded up Claudia and went out to get the very last shots of the night and man was it ever worth it. See for yourself! 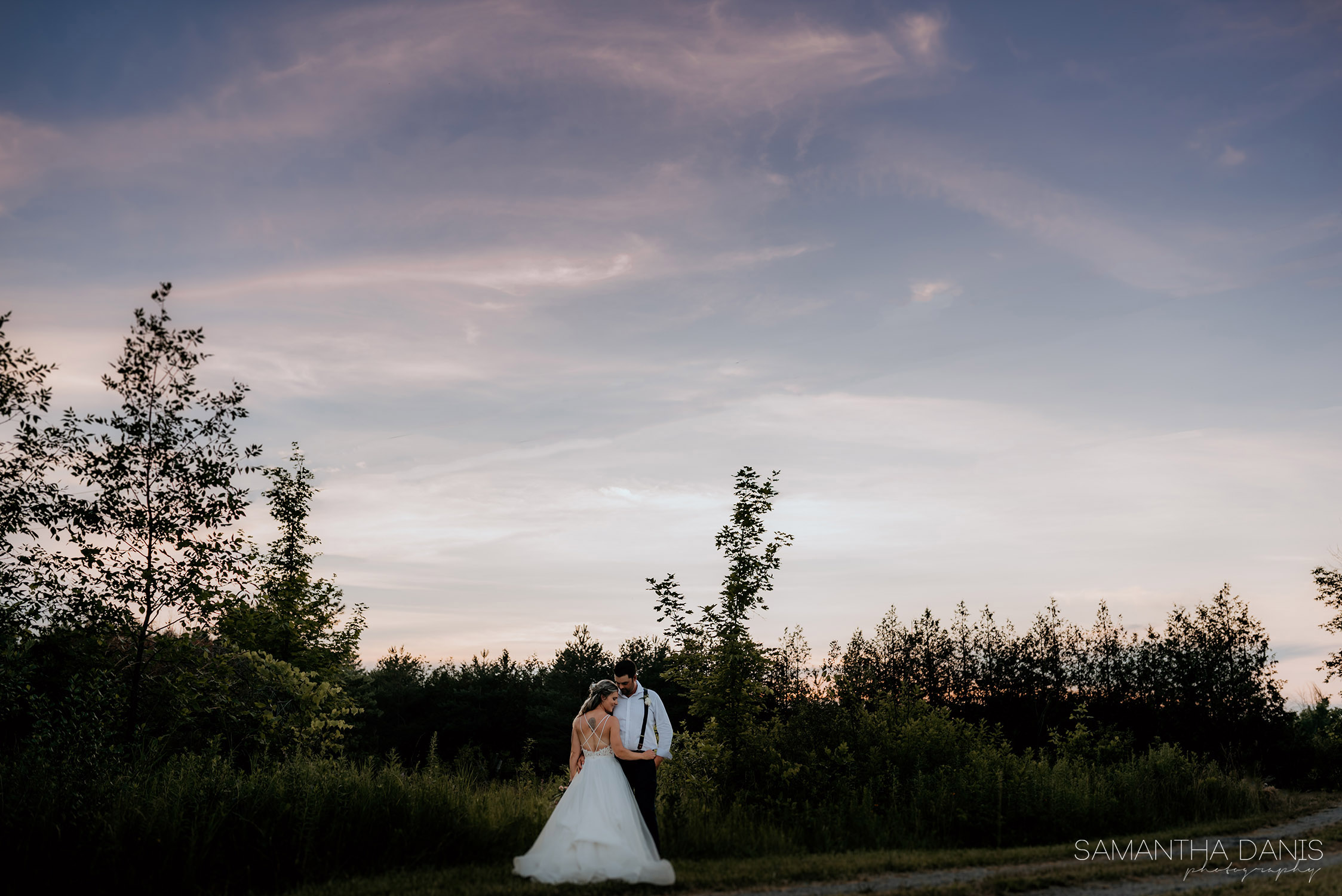 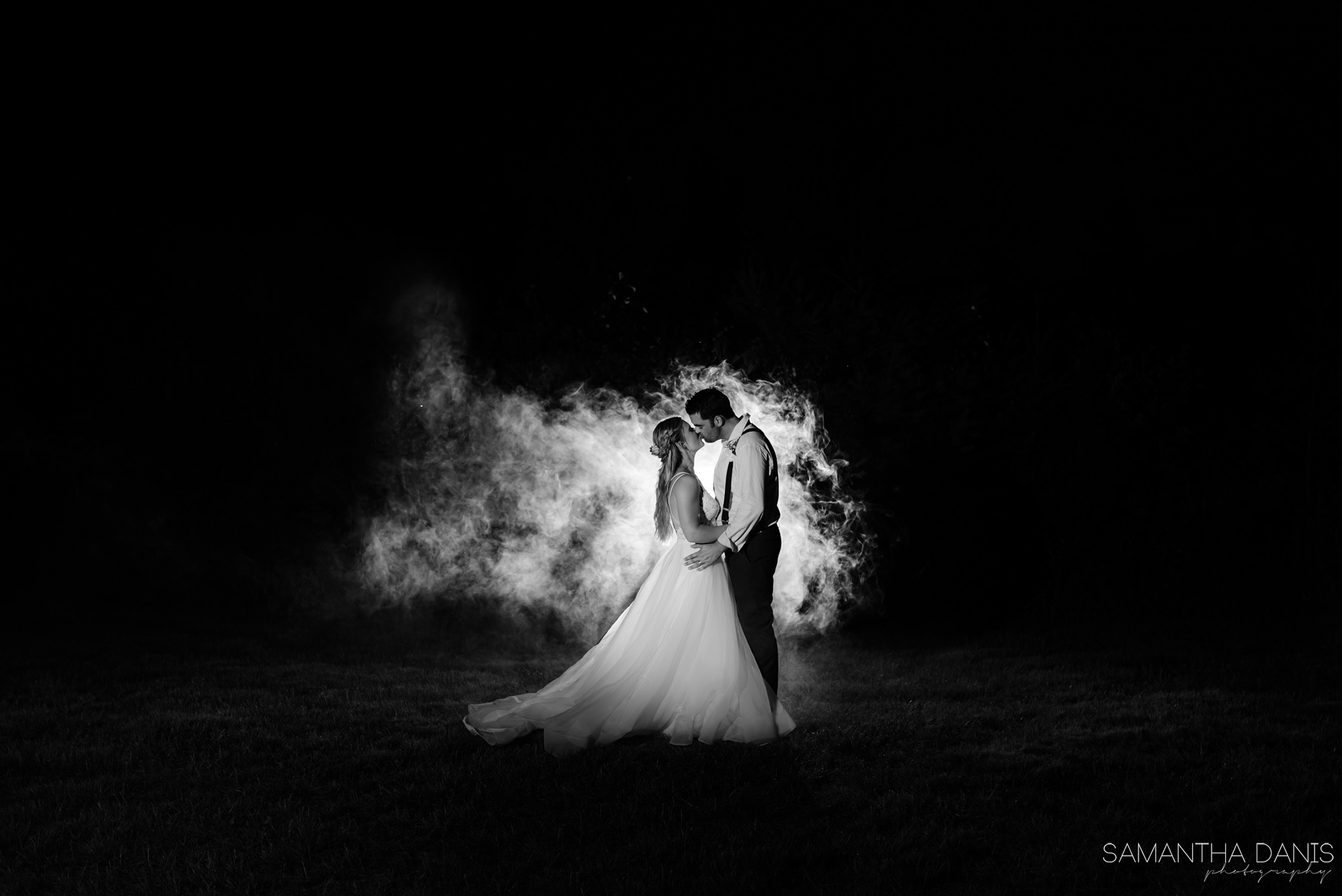 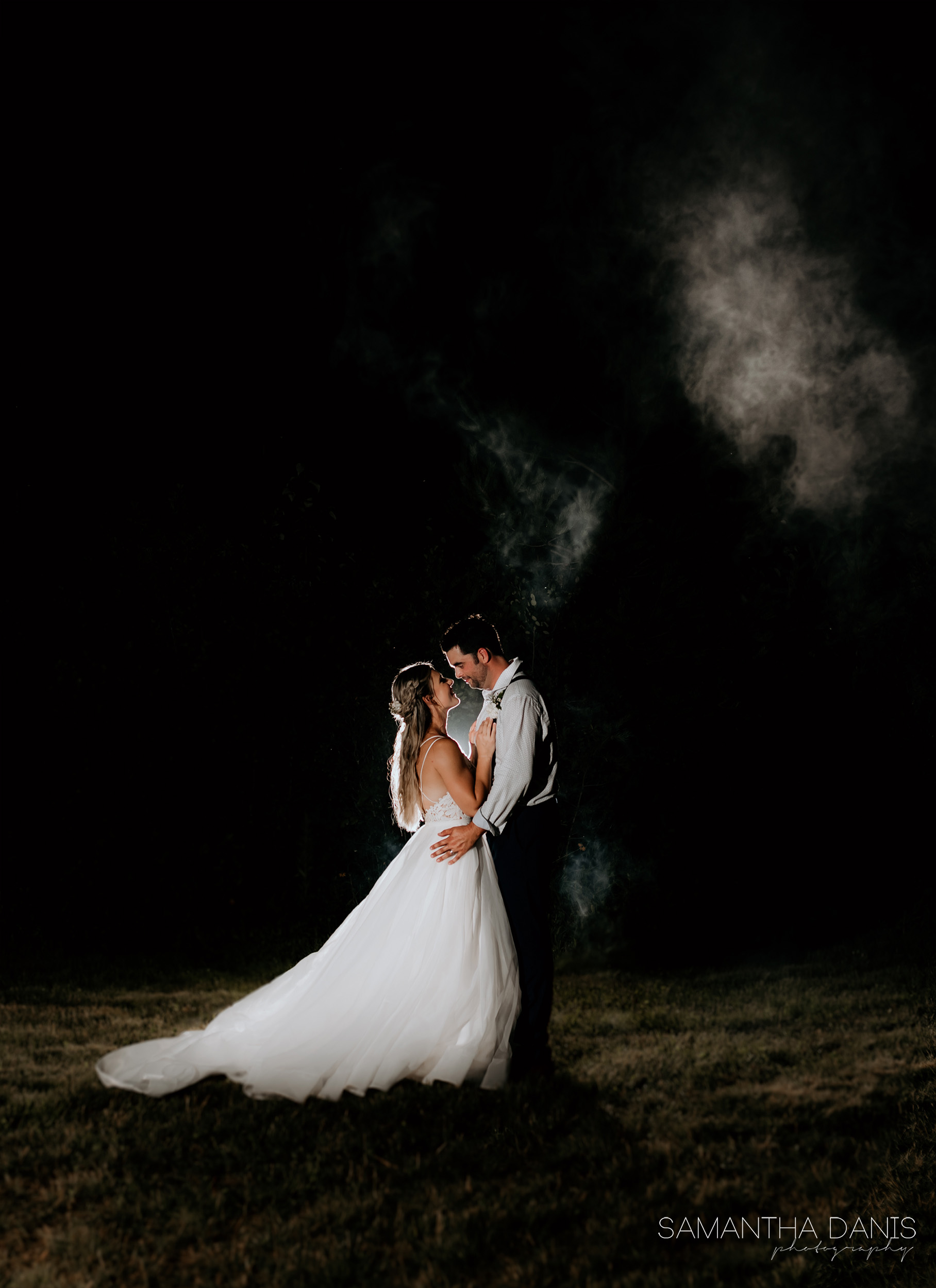 Claudia and Brendan, for a while there we weren’t sure when the wedding was happening but I think everything that happened along the way happened for a reason. You got to celebrate your wedding as a family with your little girl and you ended up having a pretty much perfect day. Albeit hot and we had a downpour but that just made it so much more special. You can say you got married on the HOTTEST day of the year and I’ll totally vouch for it. Thank you for trusting me to capture these memories and I wish you all the love in the world. You guys are fantastic and I’ll also throw a shoutout to your wedding party because damn they had me laughing! xox