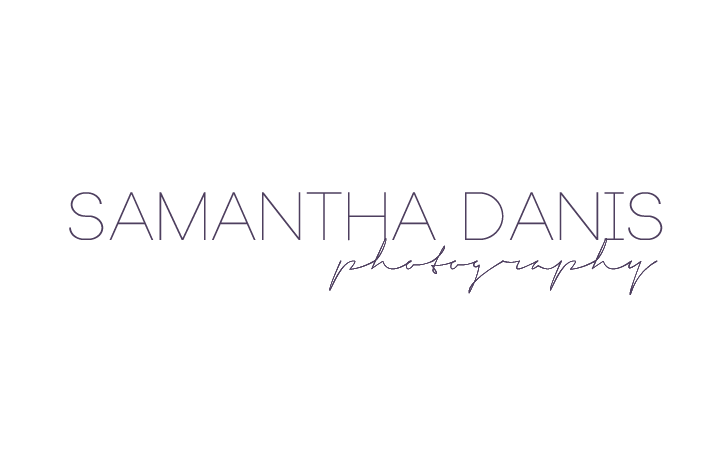 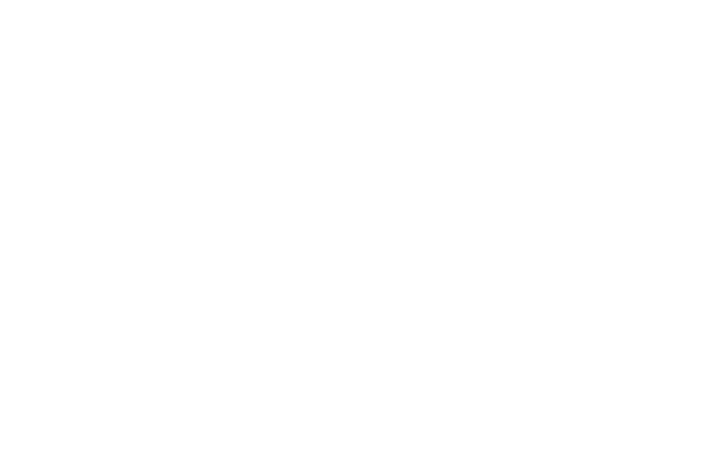 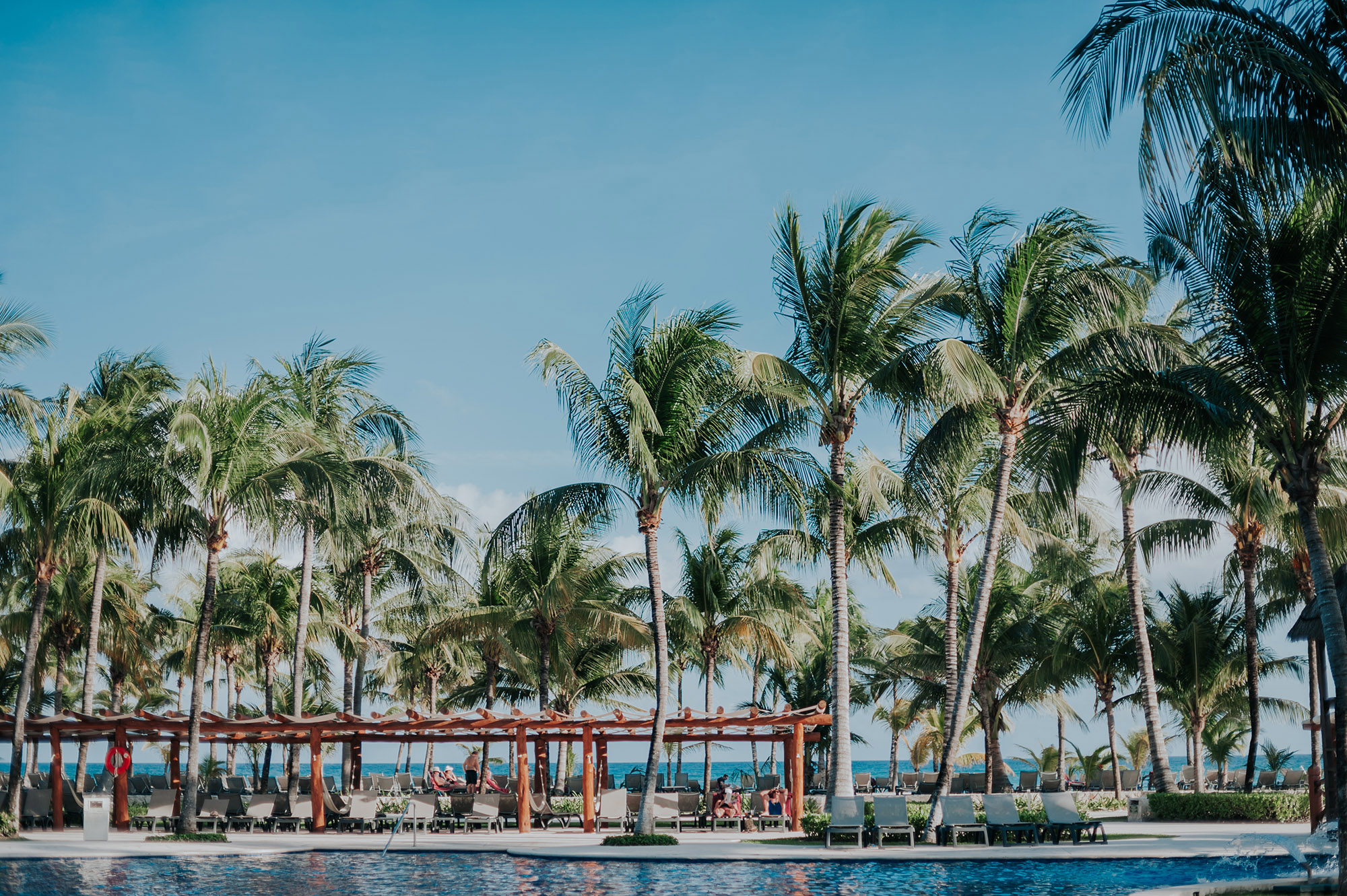 On February 1st I travelled to Mexico with Stephanie and Kiley of Opportunity Knocks Events to do our first Destination wedding together. I have done multiple weddings down south but this was my first in Mexico and boy was it ever worth it! Our flight out was smooth and when we arrived at the airport, Alex & Barry weren’t very far behind arriving from Toronto. We made our way to the gorgeous Barceló Maya Colonial where all the weeks festivities were to begin. We spent the first 3 days lounging by the beach and pool and taking it easy. And on day 4 we woke up to gorgeous sunshine and very hot weather, the perfect Mexican weather for a wedding! We started our day off lounging by the pool and soaking up some sun. I was suppose to start shooting around 2pm during Alex’s hair and makeup appointment but around 12:30 one of her bridesmaids came to find me in the pool to let me know; ”The spa mixed up the appointments and Alex is already getting her hair done.” Well Steph, Kiley and I just booked it right out of there and ran to get our things to head over to the spa. Alex was already done her hair and had just sat down to start her makeup while her momma got her hair done. We chatted about how her week was going, how Ryan, their 6 year old was taking in a new place and how Rosie, their 7months old was handling the heat. Surprisingly she was dealing with it all amazingly! Luckily for us, Steph, a master talker and wedding planner, was able to get the spa to take the happy couple in for a Massage at no charge the following day. So as much as the mixup was somewhat inconvenient due to the bride being in full hair and make up 4hours before the ceremony, there was definitely some good that came out of it! Of course, just like a perfect timer, right as Alex finished up her makeup  Rosie decided she was hungry and off she went to do her mom duties as I headed over to meet with the guys. 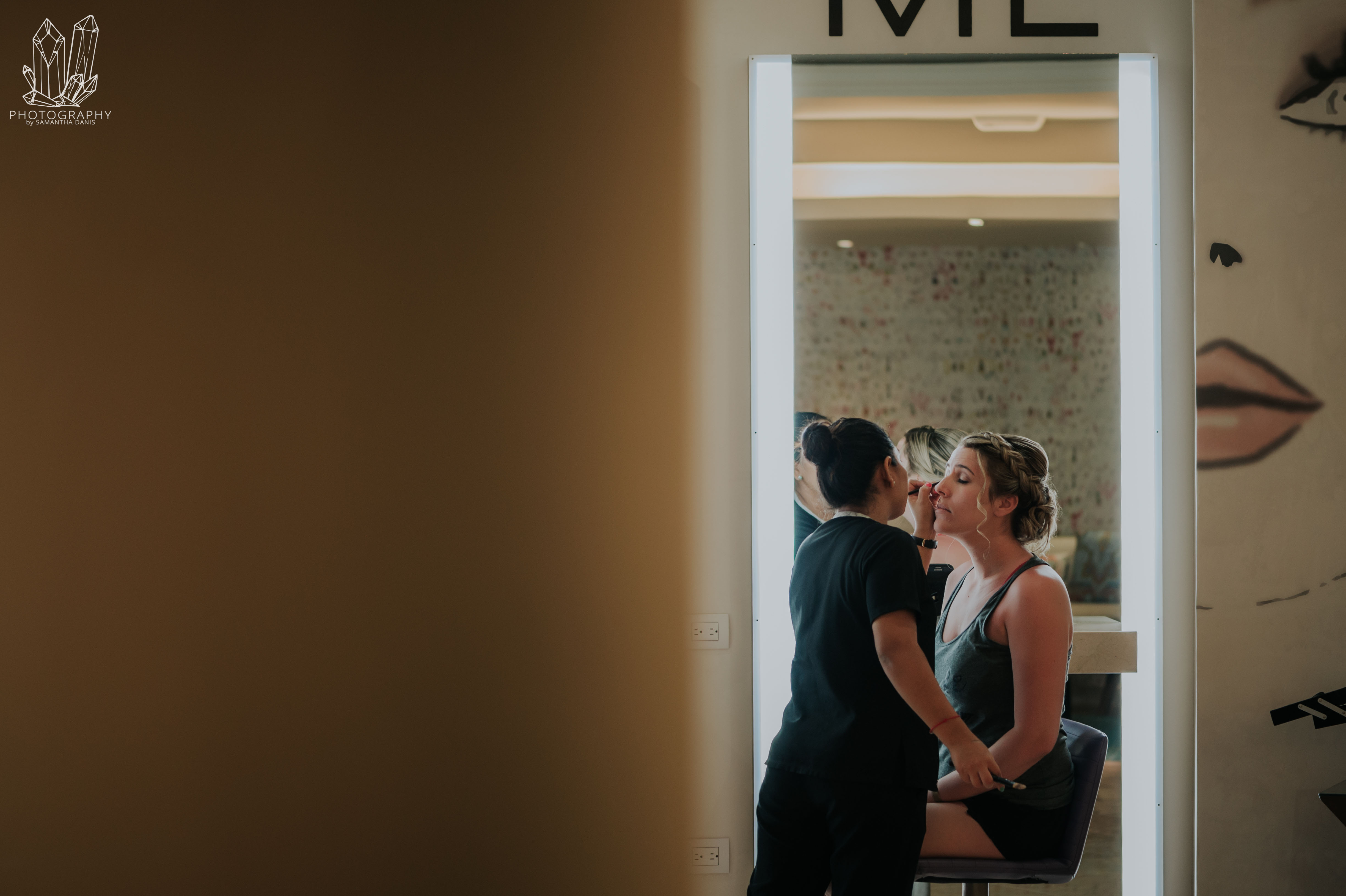 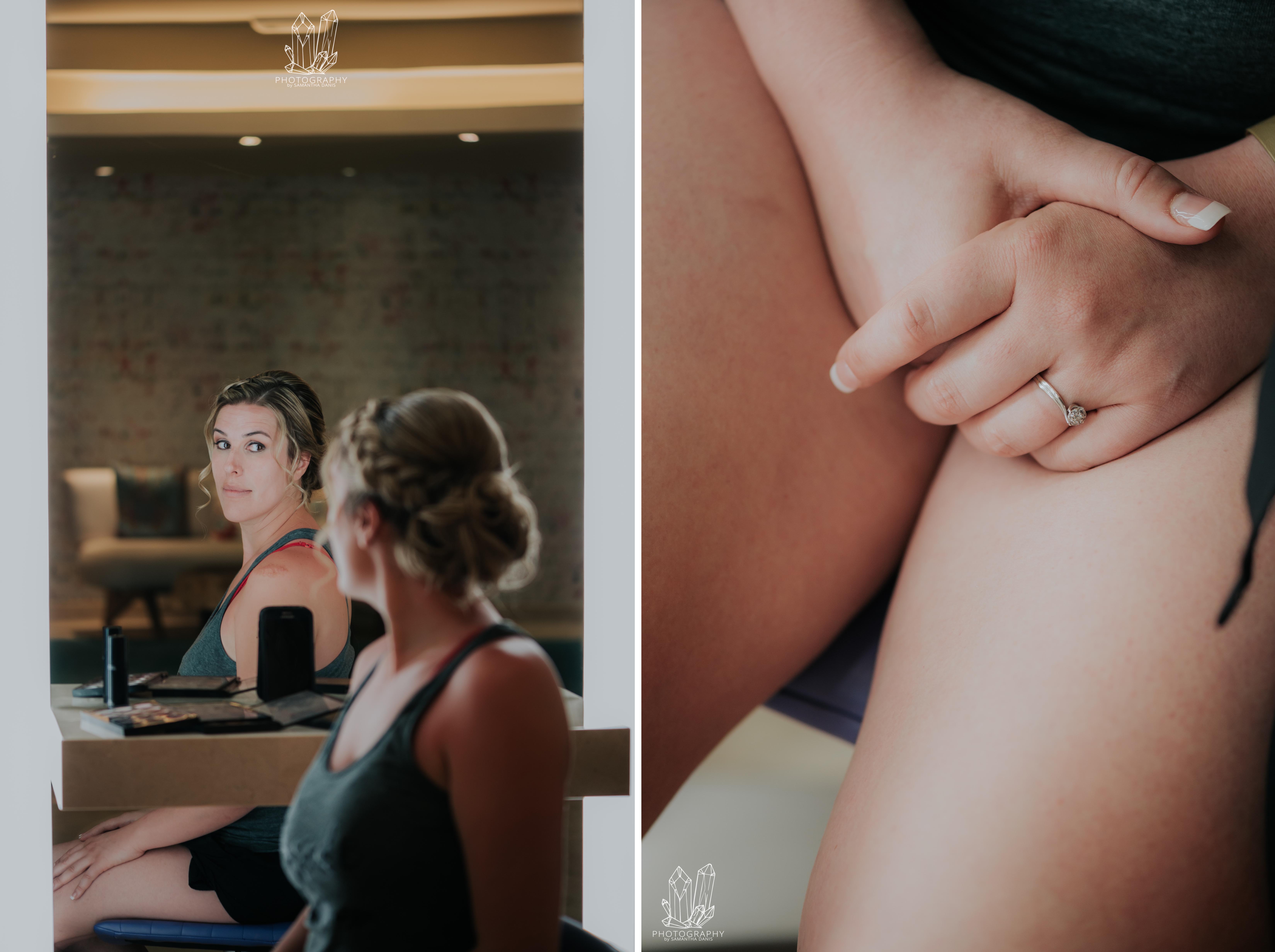 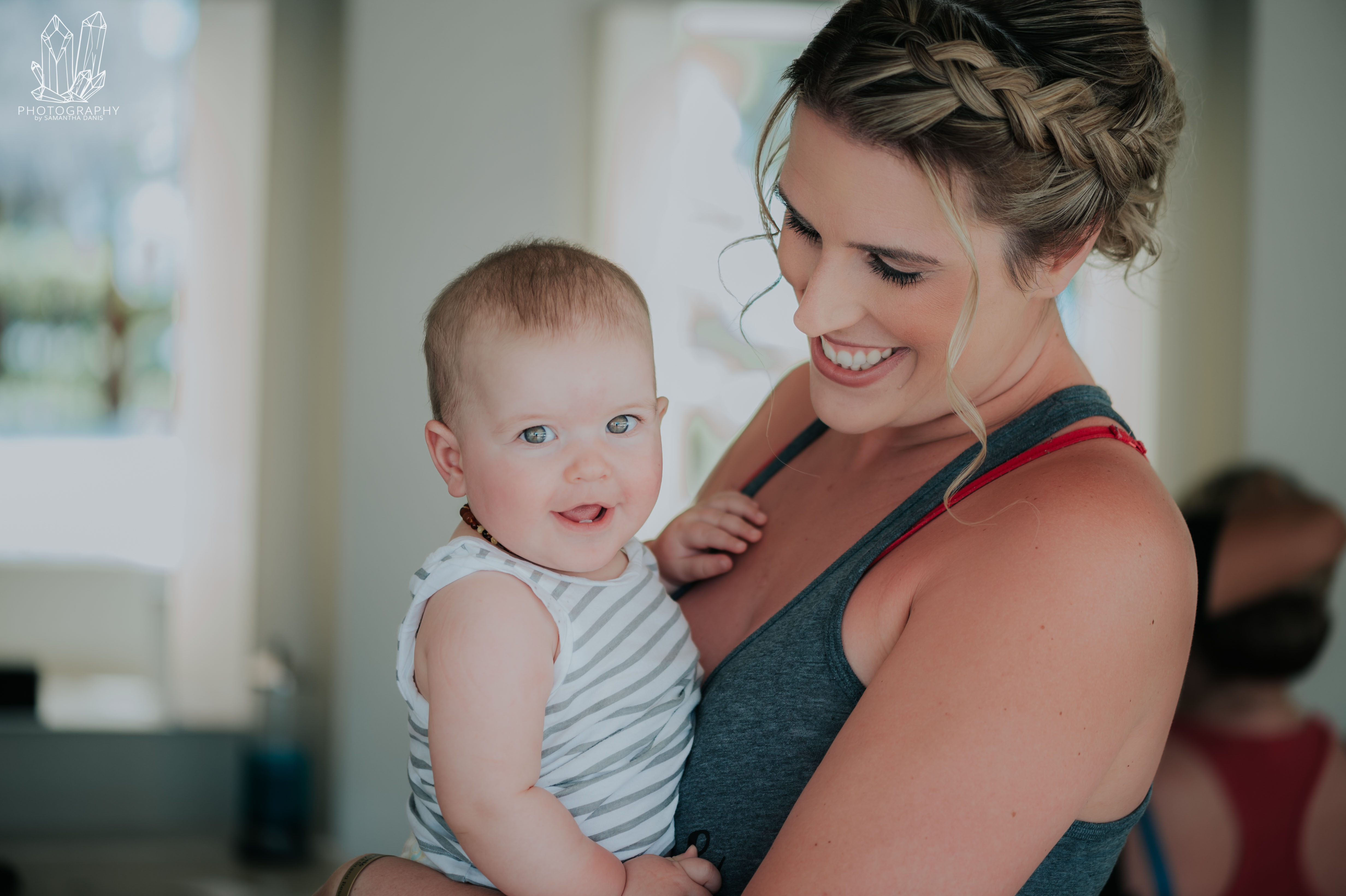 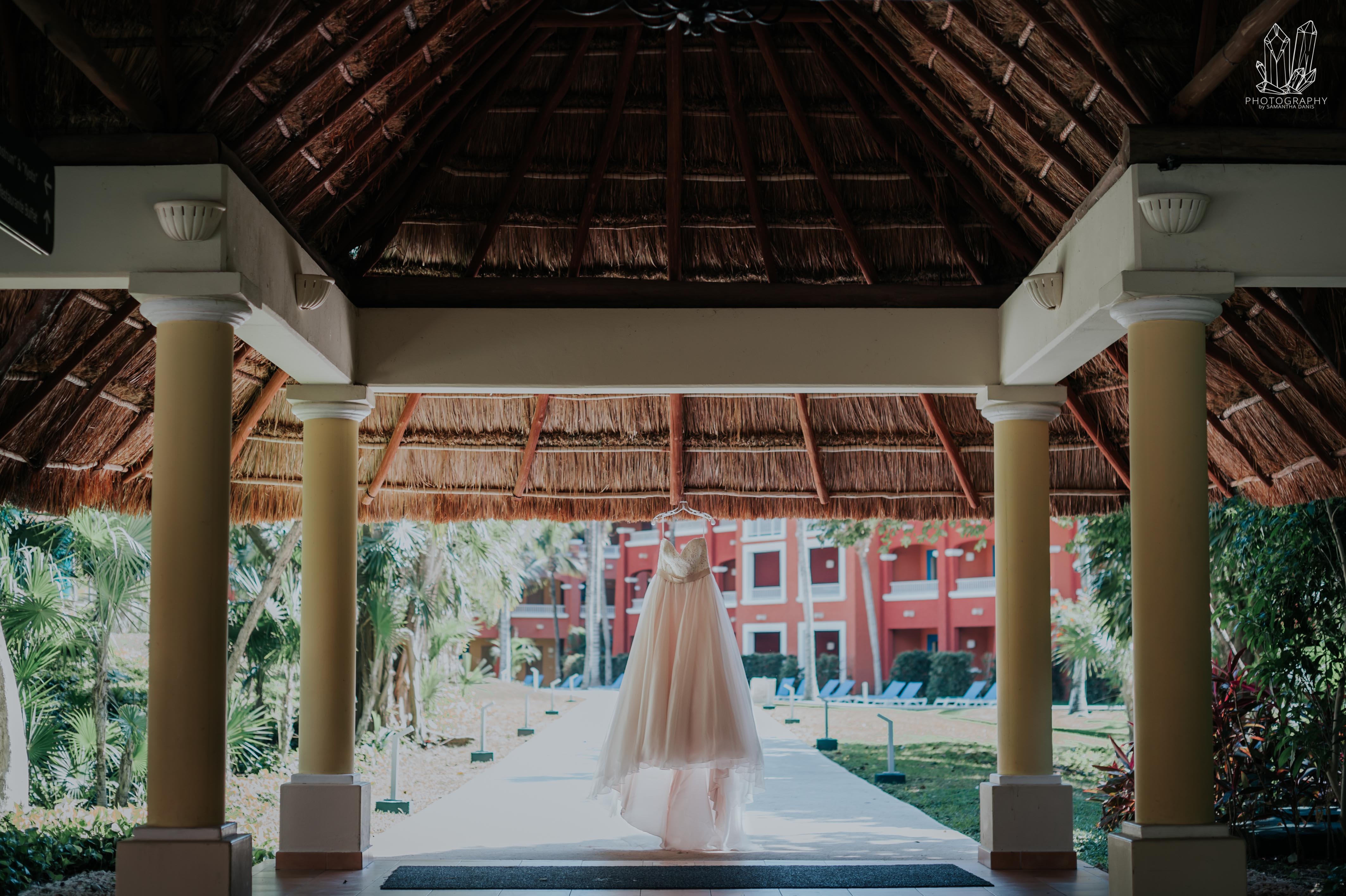 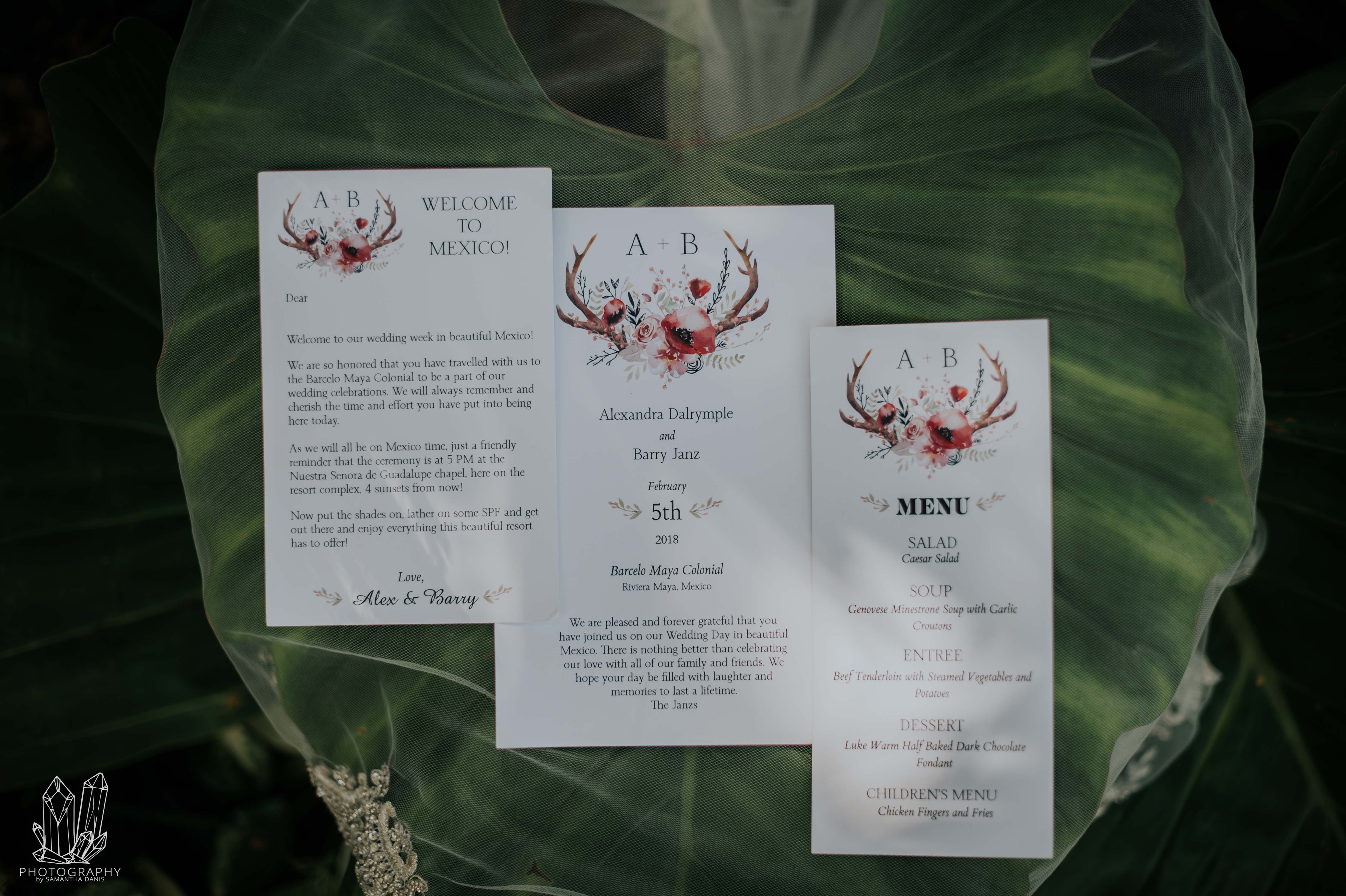 The boys were almost fully ready when I got there with just their ties to do up and of course they had been keeping cool with a few beers. Because what else do you do before your wedding whilst in Mexico? We even got a moment to get Barry to open a hand written card from Alex and a gift for him to wear on the wedding day, a gorgeous watch! He had such a big smile on his face, you could tell he couldn’t wait to meet his soon to be wife at the alter, but first, Photos! We wandered around the property looking for nice spots for photos and they took advantage of every single spot we found to be silly. First there was the grand fountain, where they pretended to throw Barry in. Then there was the indoor fountain (which had been turned off and empty since we got there) so Adam had the bright idea to make it look like they were peeing in it. Actually, while I was taking the picture I actually saw a stream of light yellow liquid coming from Adams nether area and my mouth just gaped open… And then I realized he had his beer in his hand haha! We were just dying of laughter, I mean what a guy! After a few more photos and sillyness I headed back over to the girls to get those final getting ready shots and getting the girls photos done before heading over to the ceremony. They even attempted an Abby Road crossing Beatles style and somewhat succeeded? you be the judge. The girls then got picked up by a gold cart and made their way over to the ceremony! 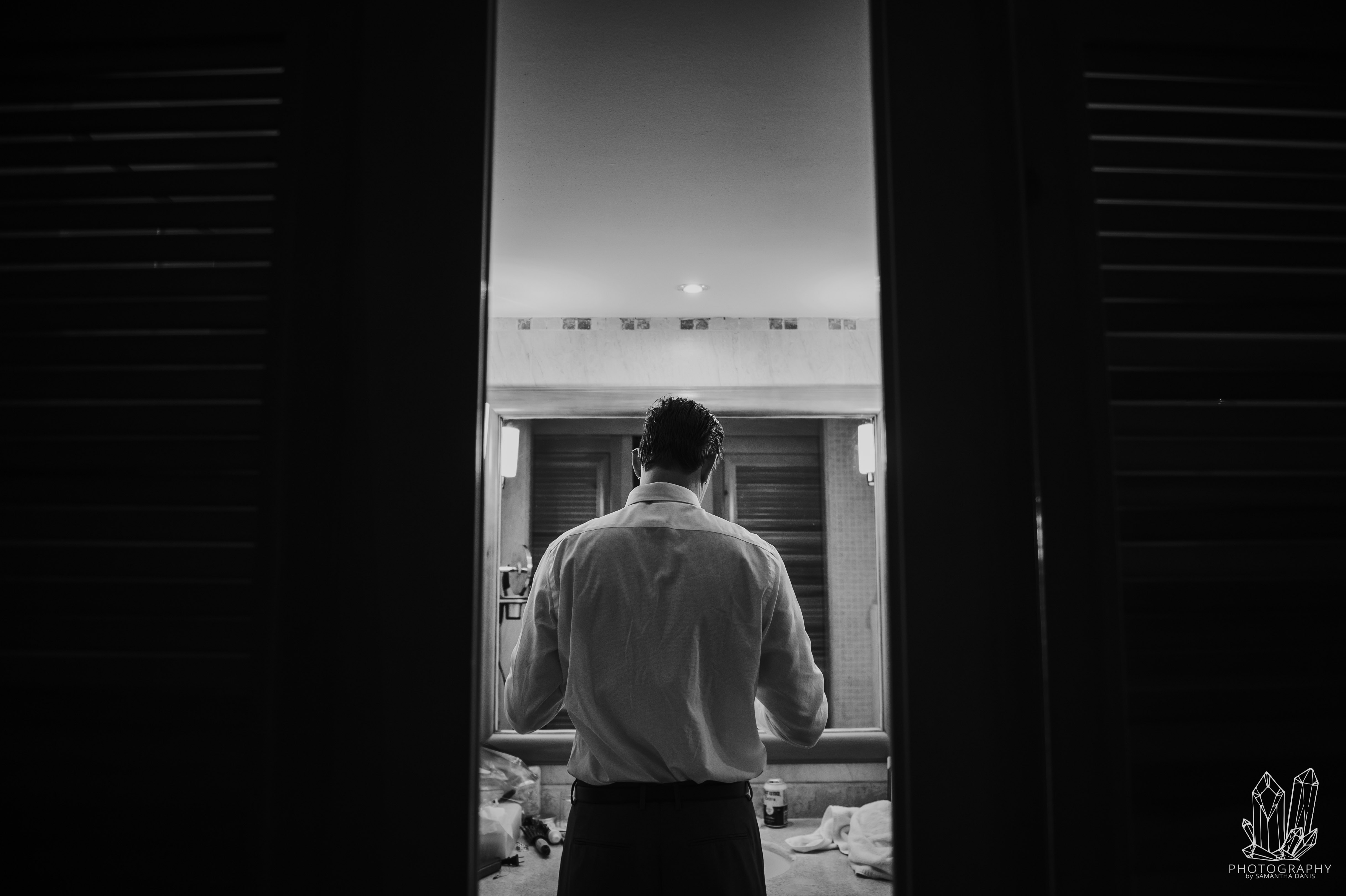 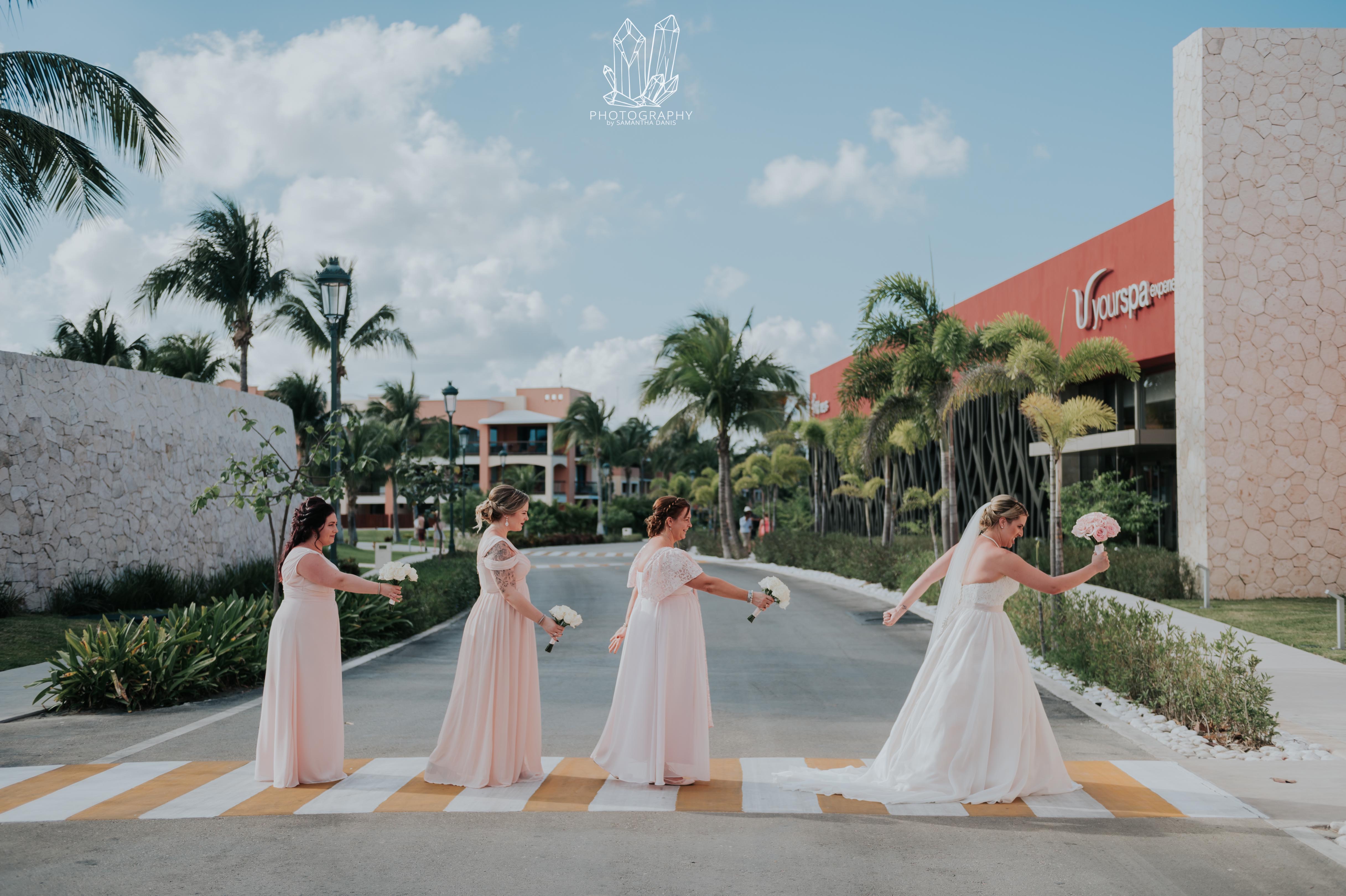 The ceremony was held in a beautiful open air Chapel right on the Barceló property and although was suppose to be a full 45mins long, ended up being about 25mins long thanks to some awesome negotiating from our wedding planners. After an initial hiccup with the priest causing a small delay in the start of the ceremony, every body lined up and was in position and the procession was able to begin! All the little kiddies lined up, 9 of them, and they did everything like champs. Then it was time for the beautiful bridesmaids in their soft pink gowns, then Alex’s mom and Rosie. Rosie was totally okay right up until it was time to walk, poor thing was probably heating up and she just started crying! Lise tried to calm her as much as she could by smiling and caressing her but she was having none of it. Luckily her big sister wasn’t too far behind her doing her flower girl duties and running up to meet her. Alex then made her way around the corner and she was so beautiful walking arm in arm with her dad. Barry refused to look up, Adam was actually giving him a play by play of what was happening until she was at the very beginning of the pews, which is when Adam gave him the green light to look up. The second he saw her his eyes just glistened and started to puddle up with tears. It was so cute! Alex teared up as well and kept the biggest smile on her face. The ceremony was short and sweet, just how Alex wanted it, but that doesn’t mean it wasn’t filled with emotions. From the biggest smiles I’ve ever seen, to the many many tears and so much love. They were pronounced husband and wife, kissed and in true Alex and Barry fashion, high fived as soon as it was done! 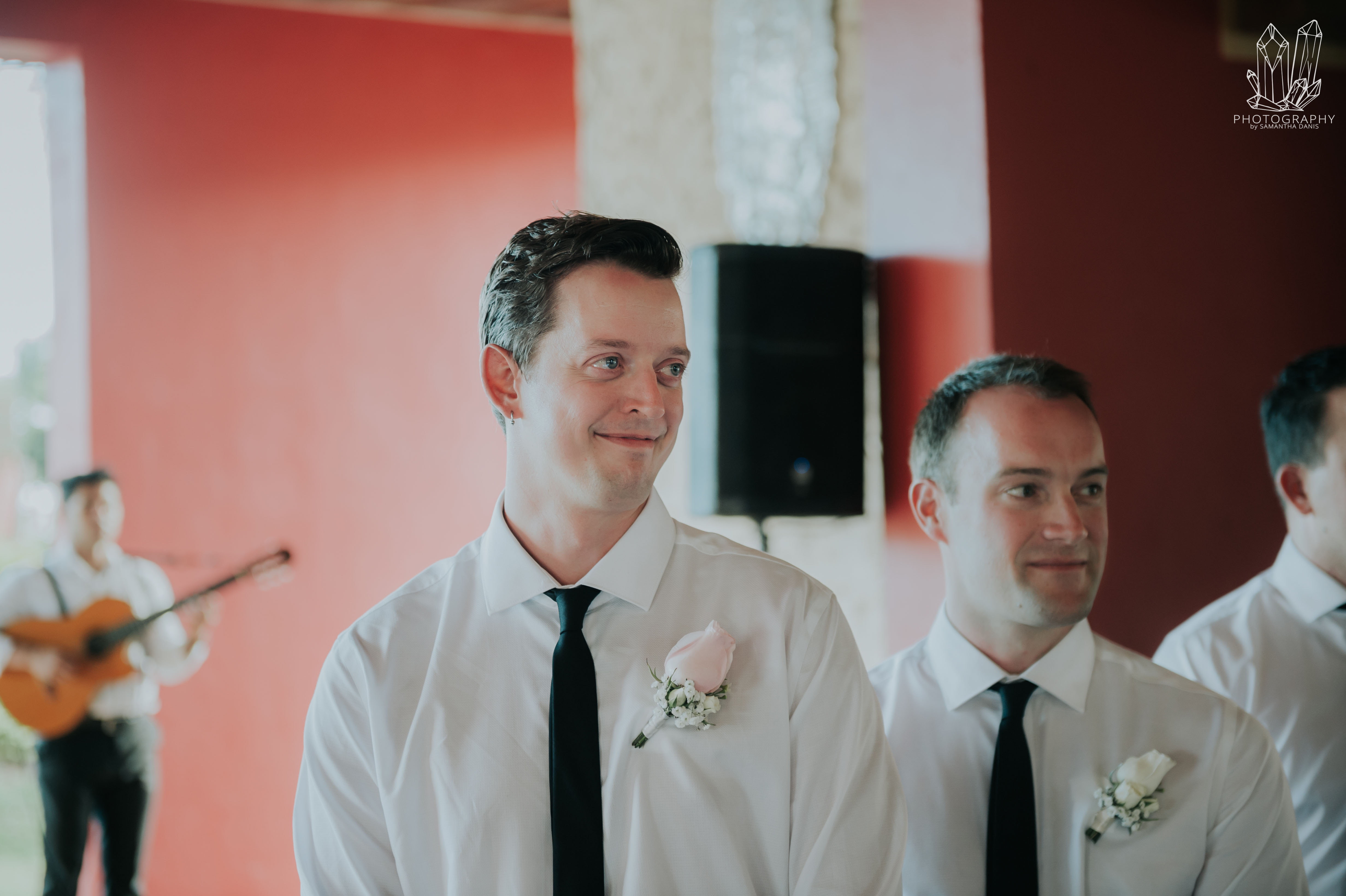 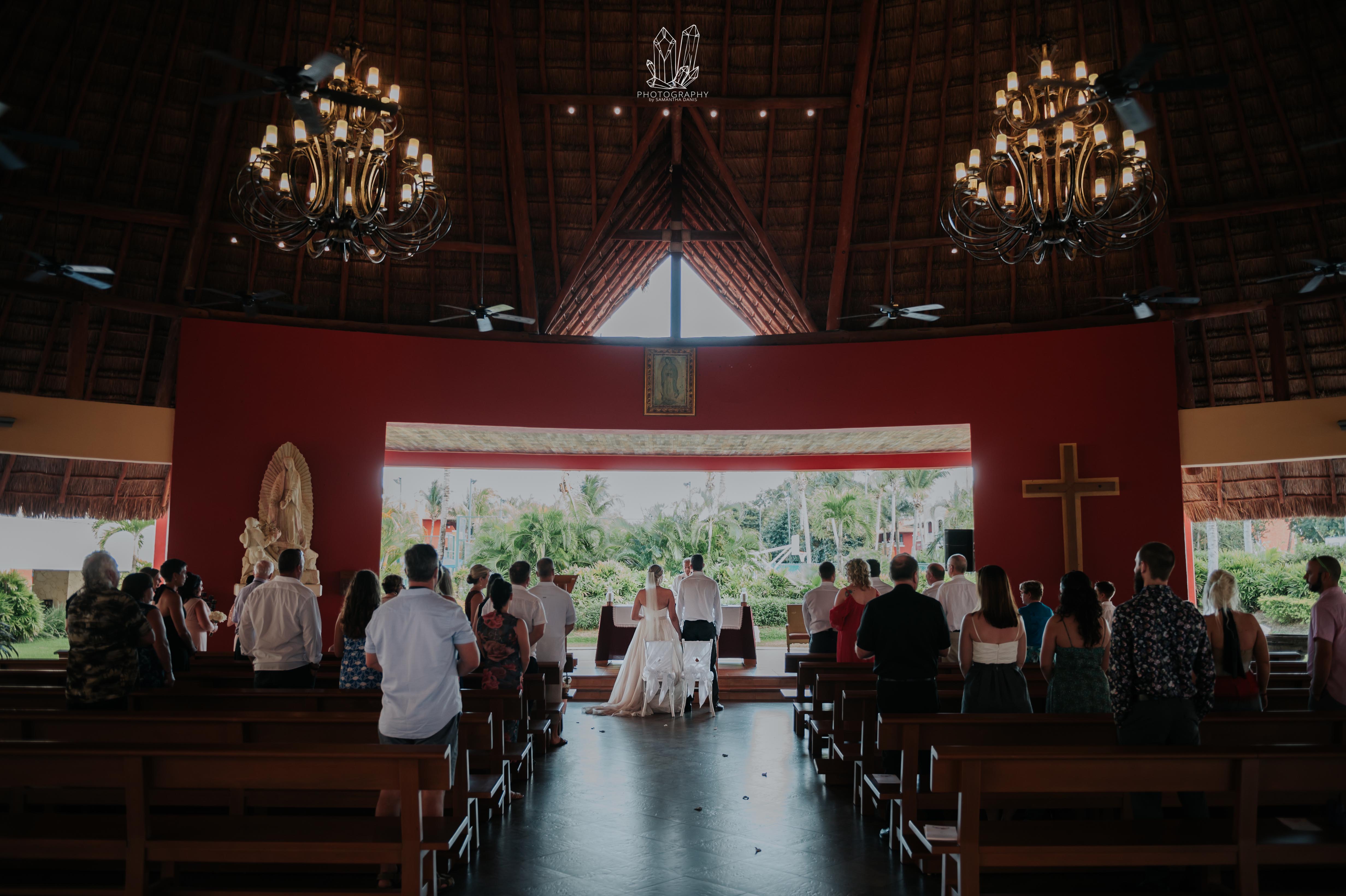 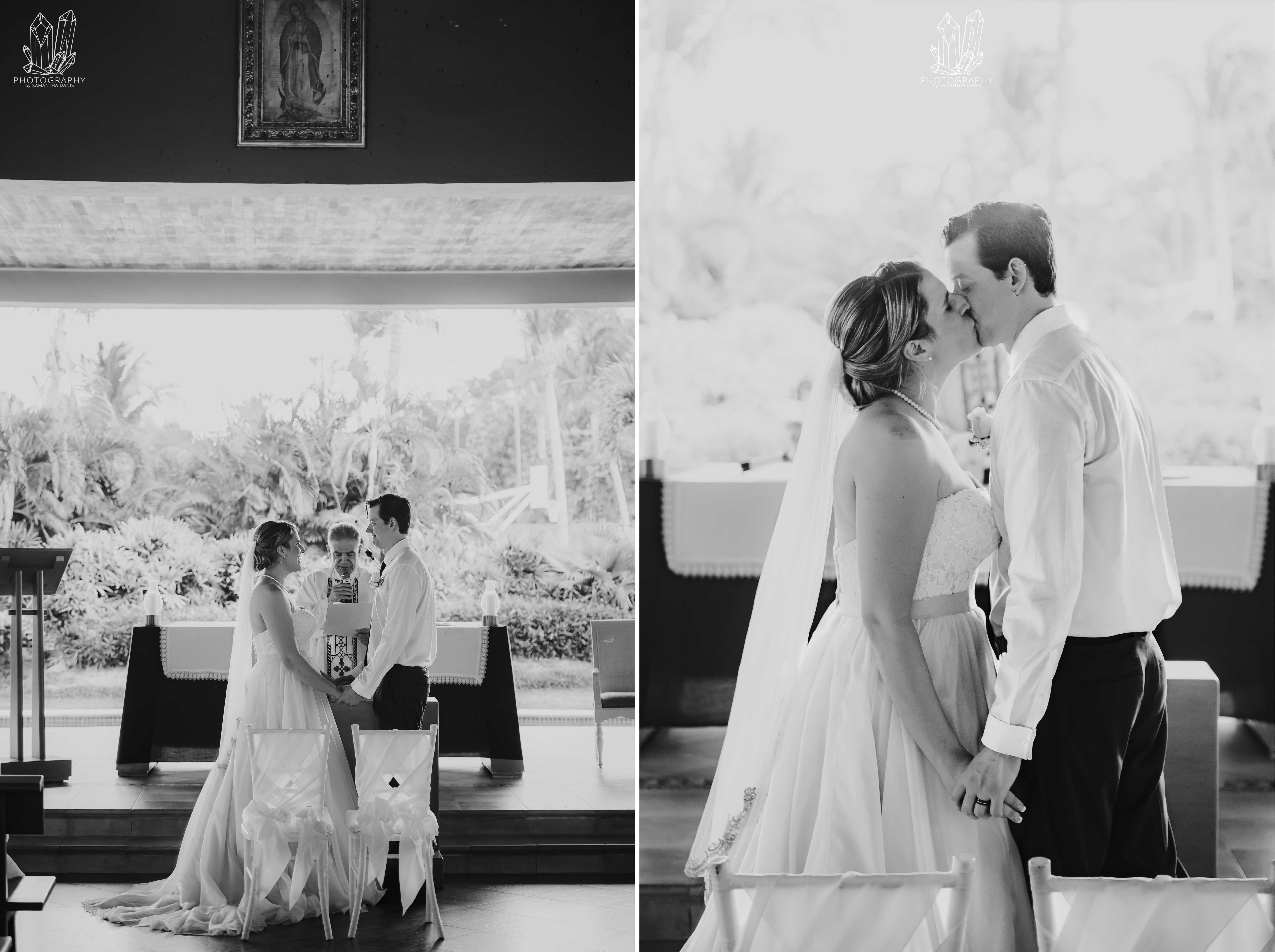 We had a limited amount of time after the ceremony to get all the photos done, and with a 7month old baby starting to over heat we had to get things done fast! We looked around for a spot and found a beautiful orange wall that we thought would be a great representation of the colour everywhere here in Mexico and it was right beside the ceremony space so baby didn’t have to go too far. After all the family and guest photos were done, we hopped onto a bus and made our way down to the beach for bridal party photos. 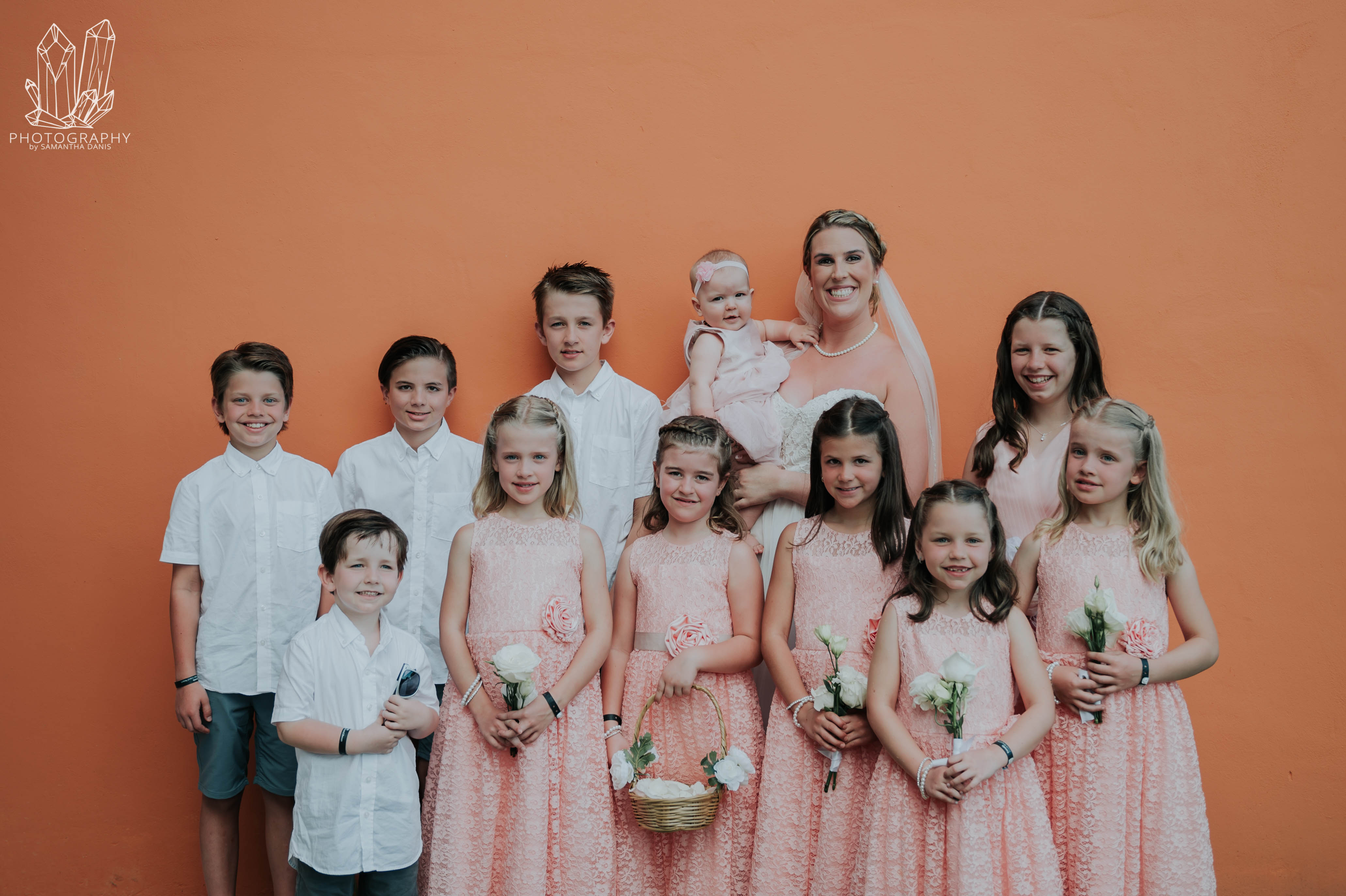 We arrived at the beach and we thought, what better way to commemorate this wedding then with a group shot on the Riviera Maya sign in all of it’s colourful gloriousness! Not to mention that the crew had colourful sunglasses to go with it, so it was perfect. We wanted to get a quick shot in of Alex, Barry, Ryan and Rosie but she had already been taken out of her dress and diaper to play in the water so we made due with a naked baby and took an adorable family shot! Alex even managed to moon me with Rosie’s adorable baby bum. We walked around the property and had fun with it! From the beautiful scenery, gorgeous sunset and coral, we couldn’t have had a better time. Ryan was even the centre of attention for a few of the photos and girl knew how to rock it. I then took Alex and Barry for a romantic stroll along the beach to finish off on the boardwalk over the ocean. The sun was just right and they are some of my absolute favourite shots. Alex did have the brilliant idea of throwing Barry a life buoy for what he just signed up for which made for a funny ending to our shoot. They both quickly ran off to see how their girls were doing before heading off to the reception hall for a night of fun! 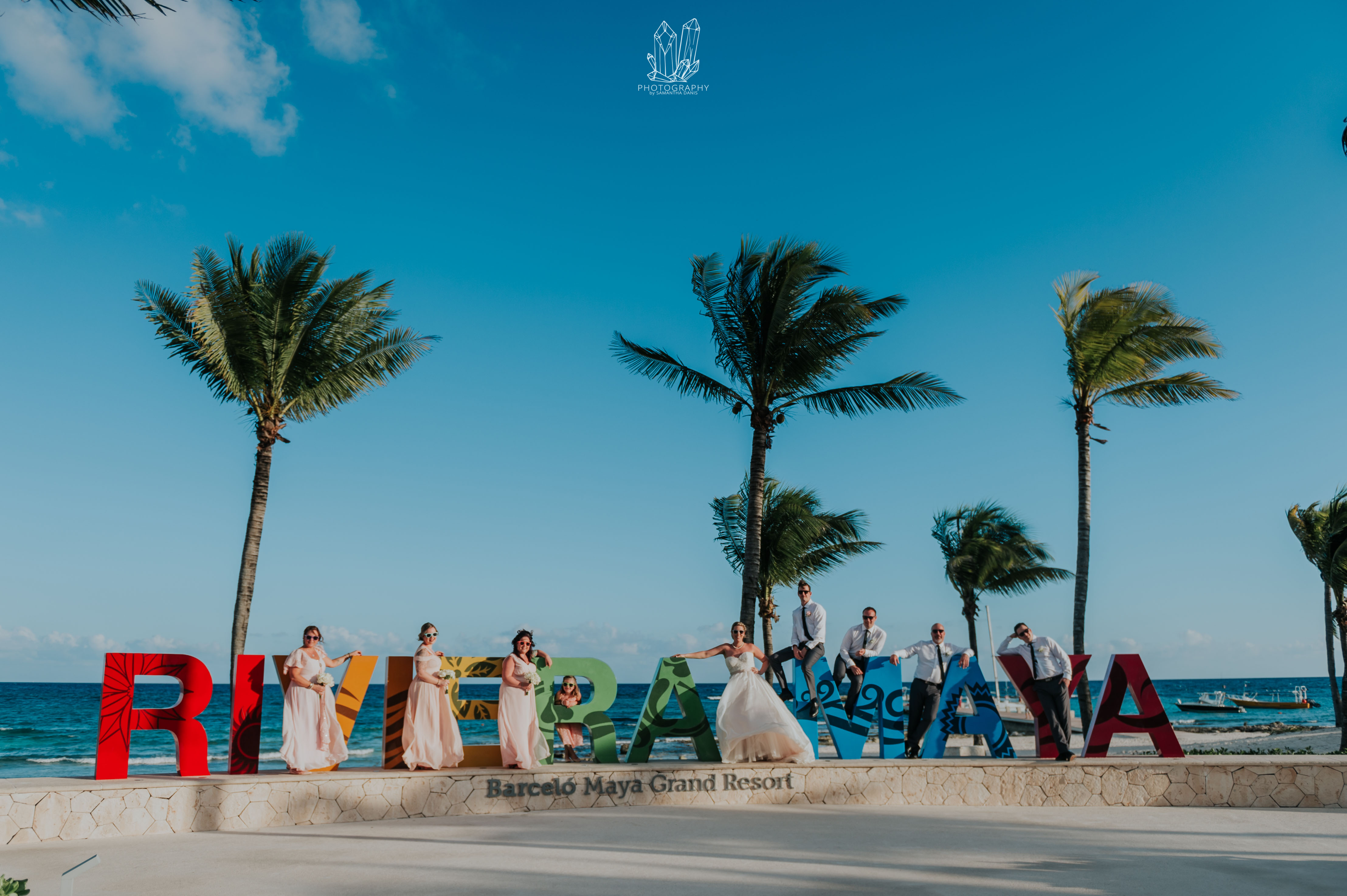 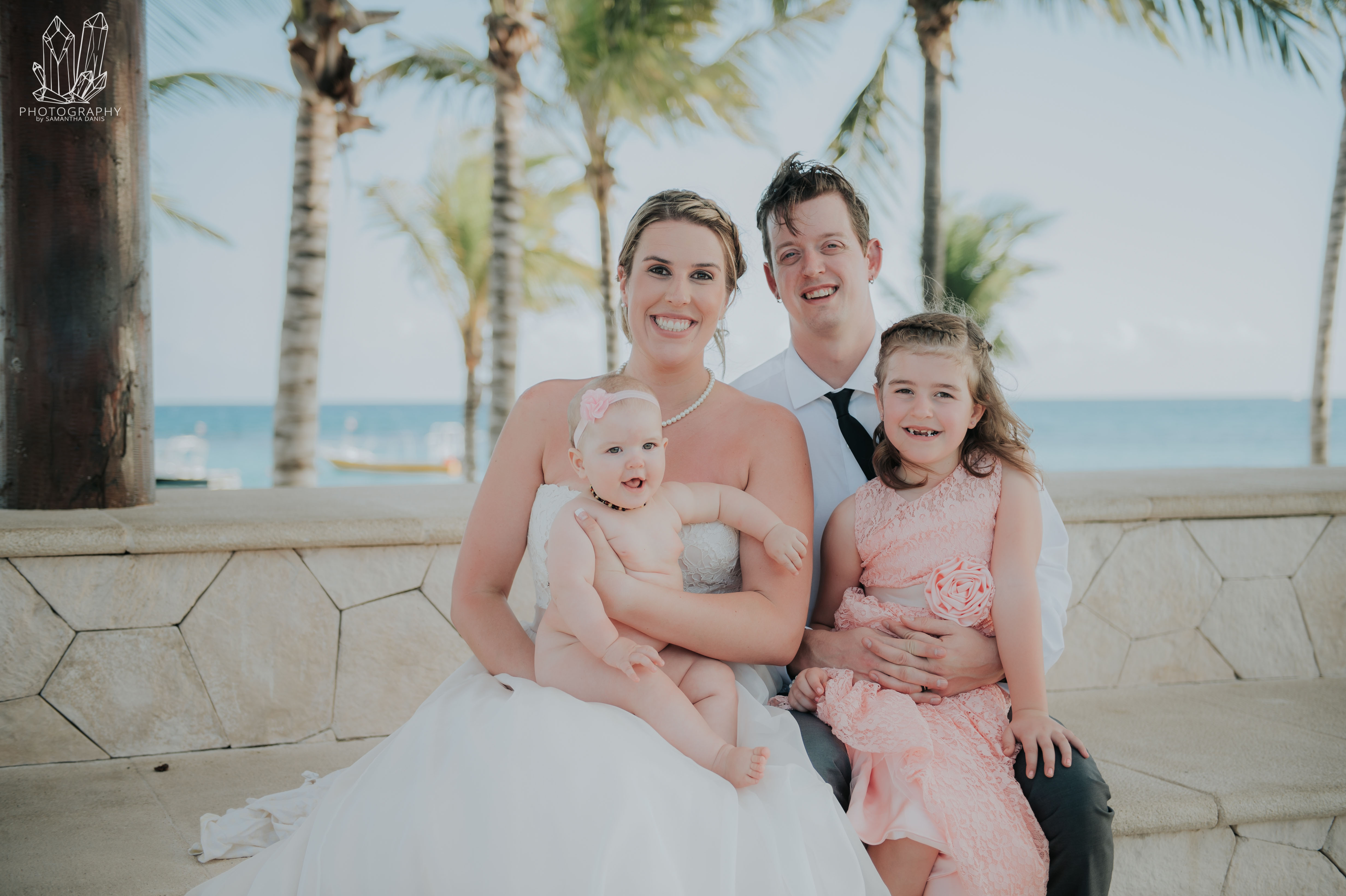 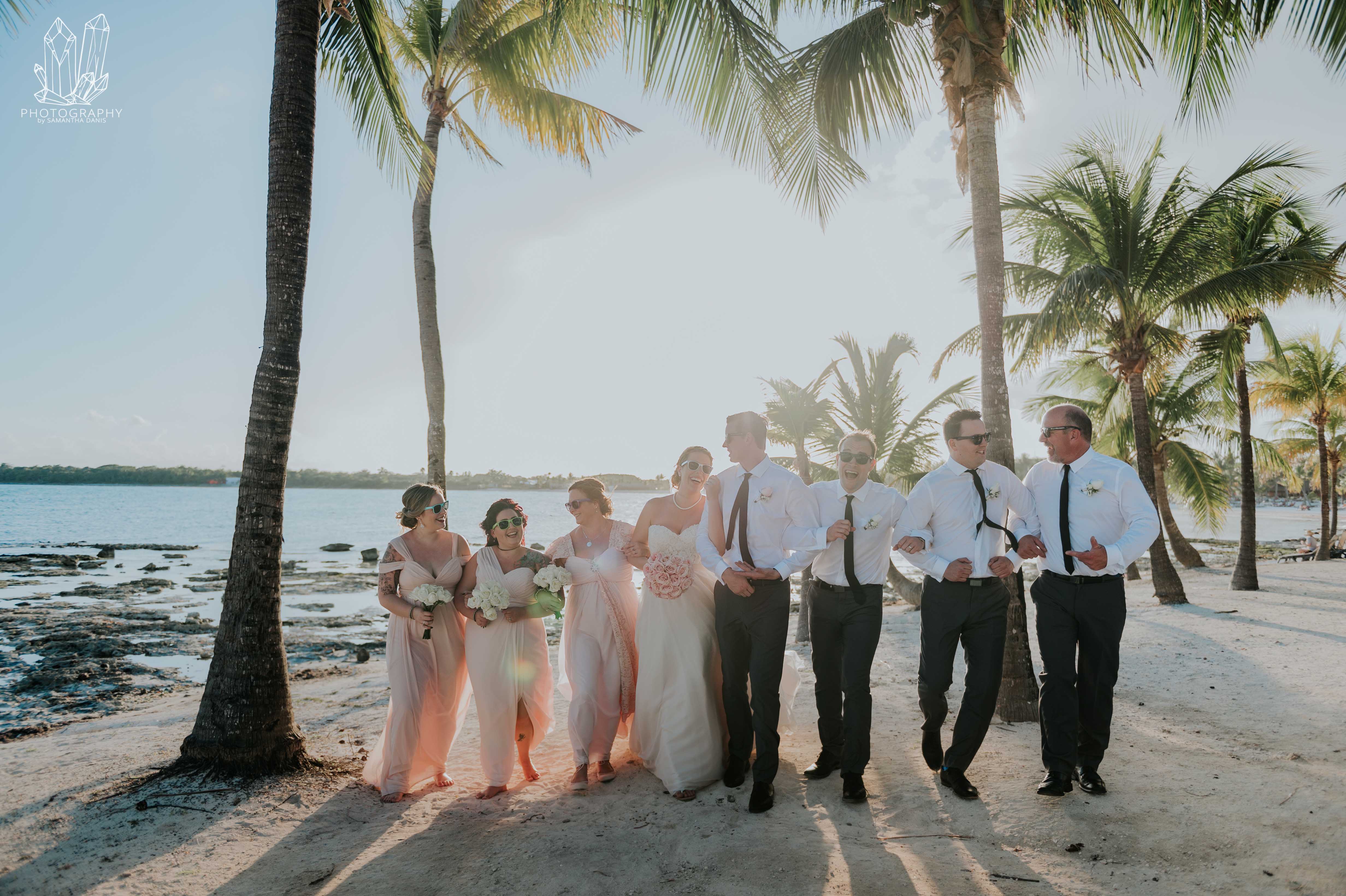 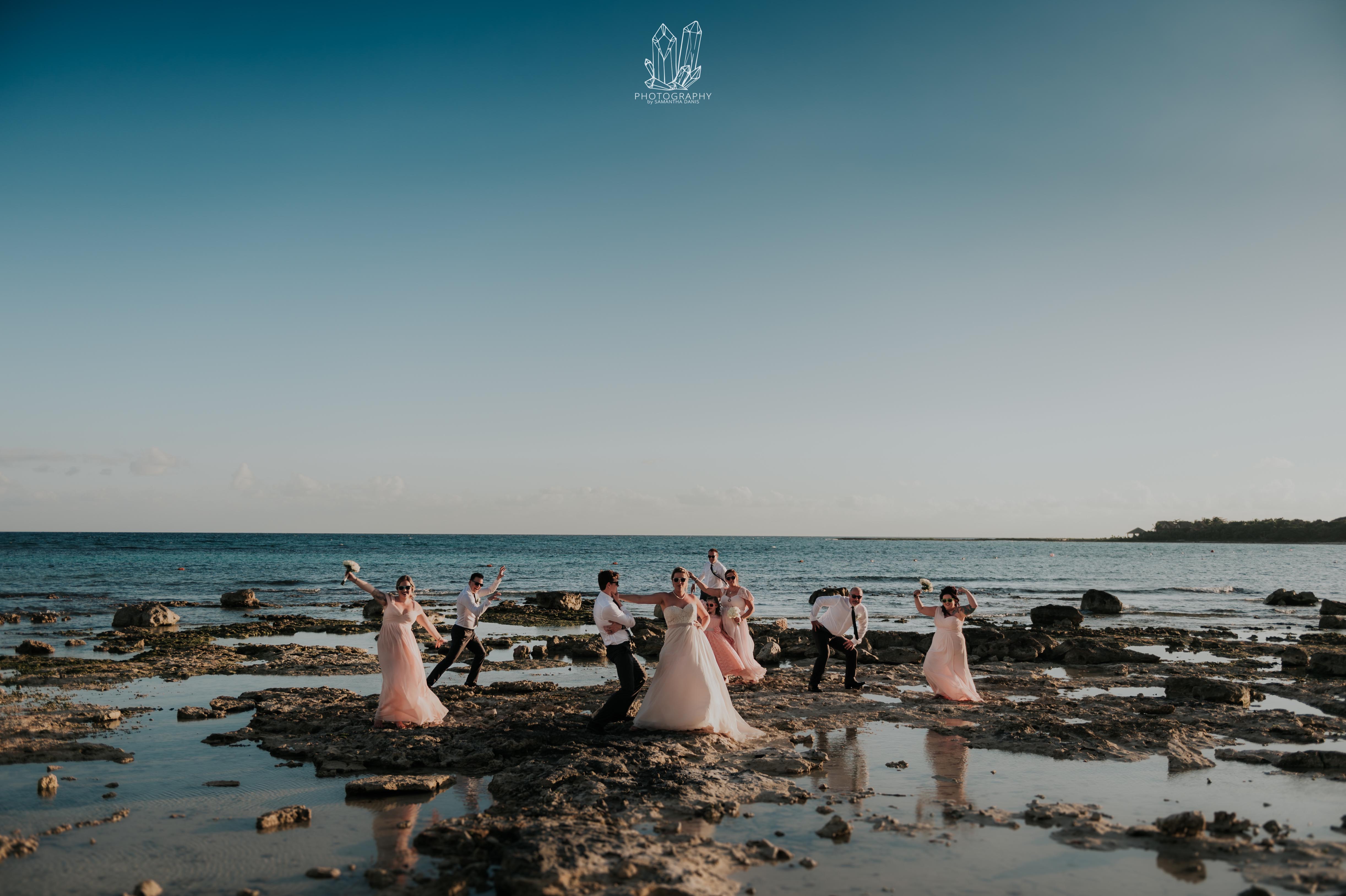 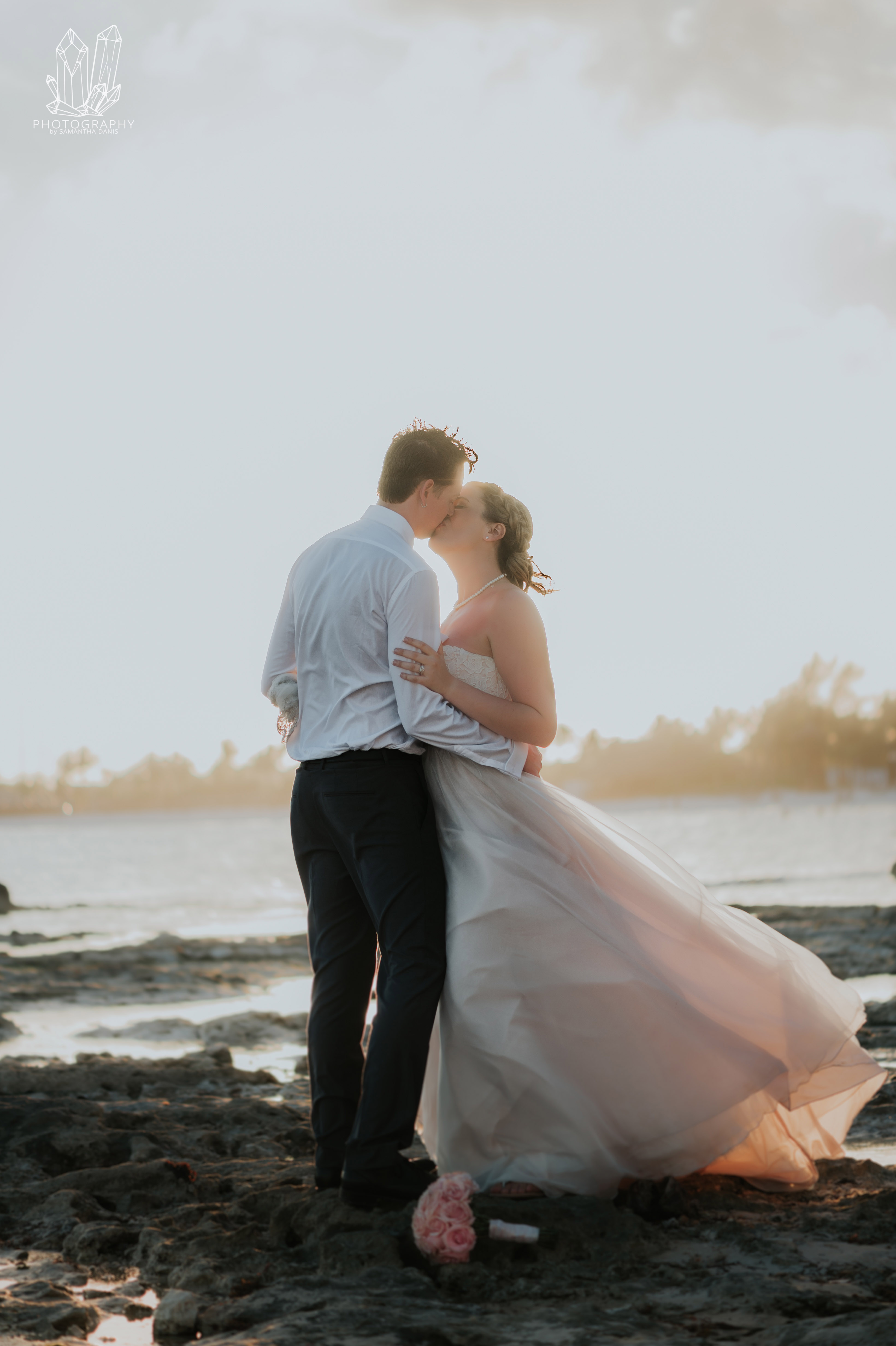 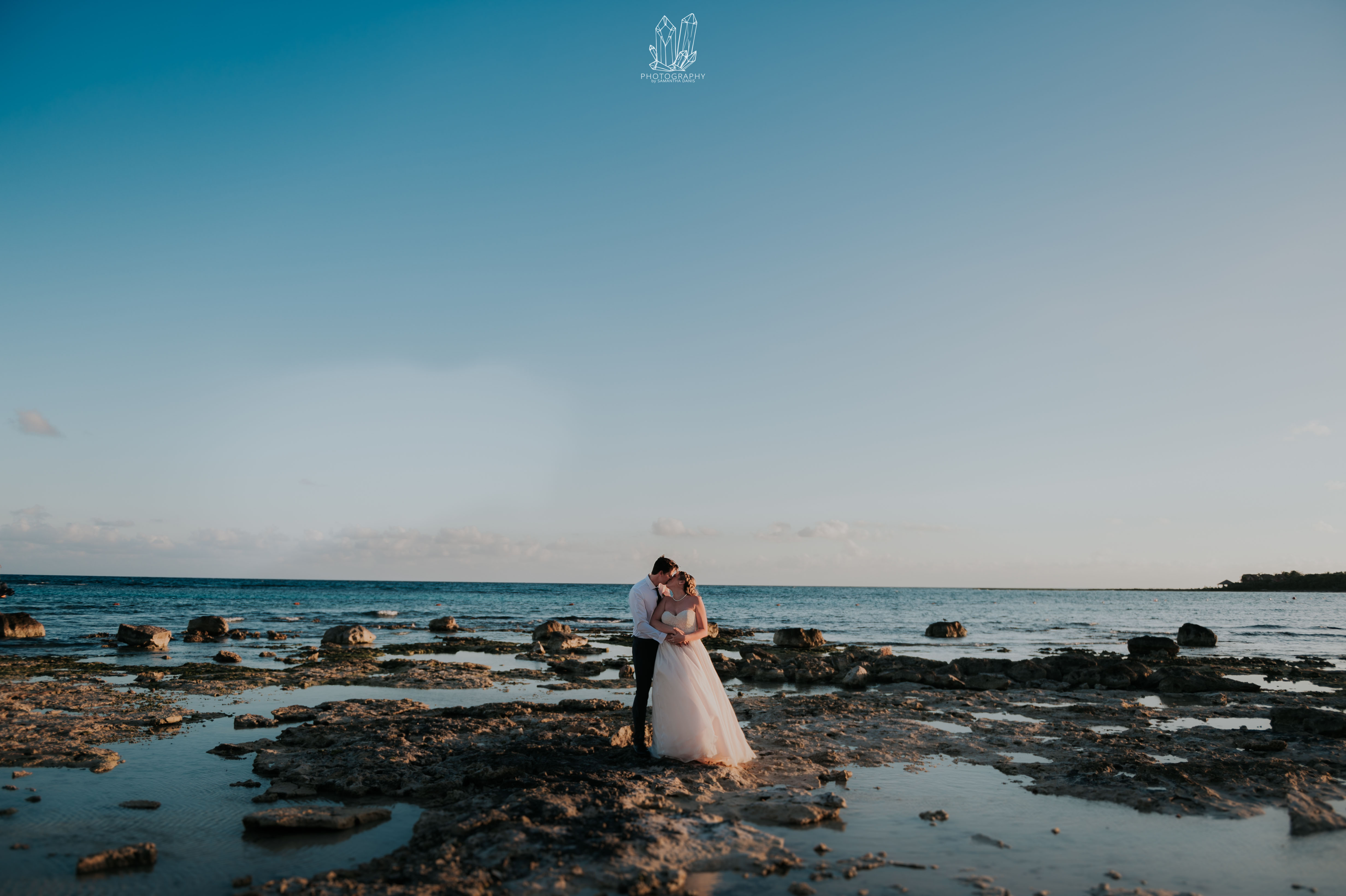 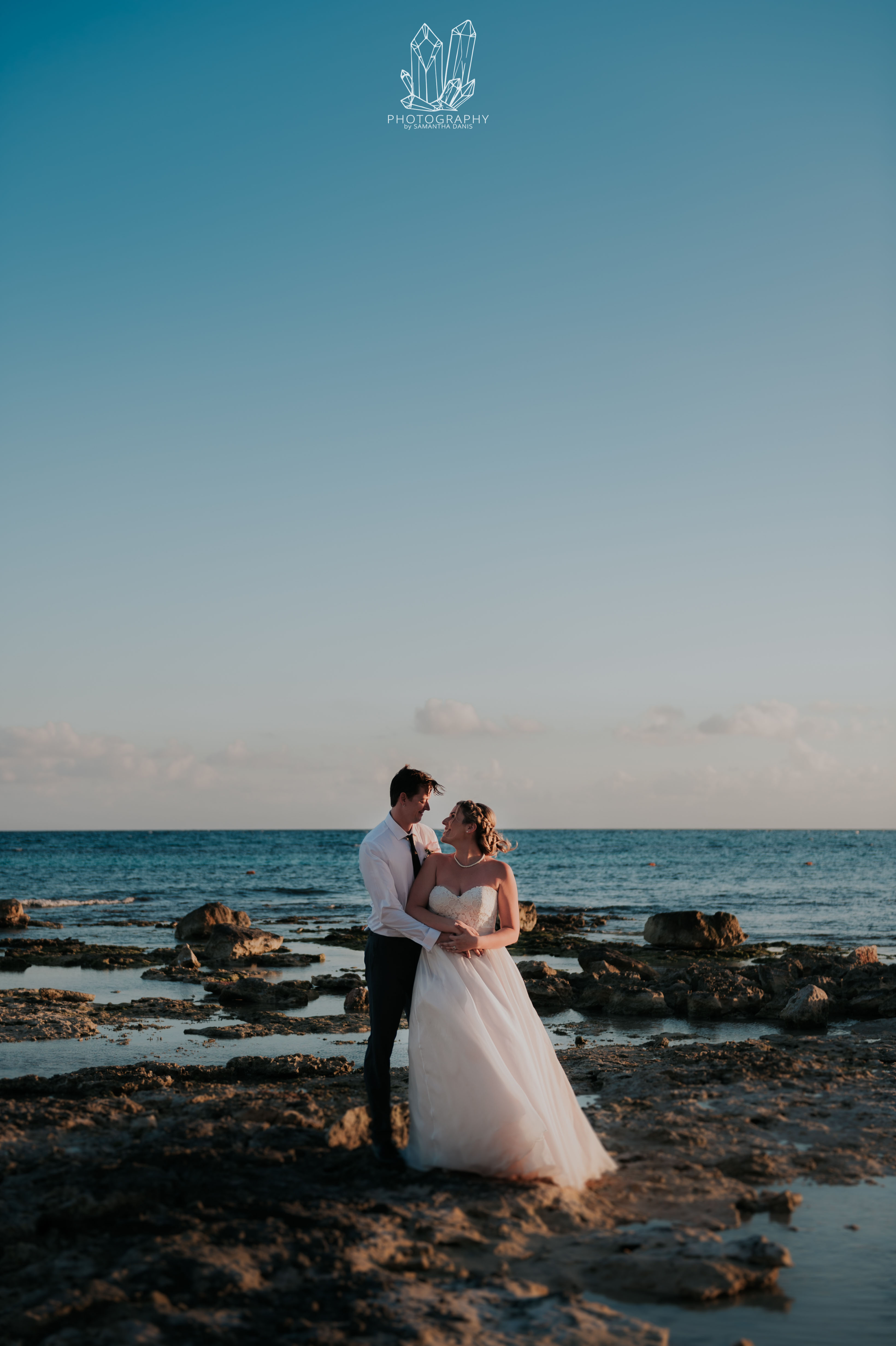 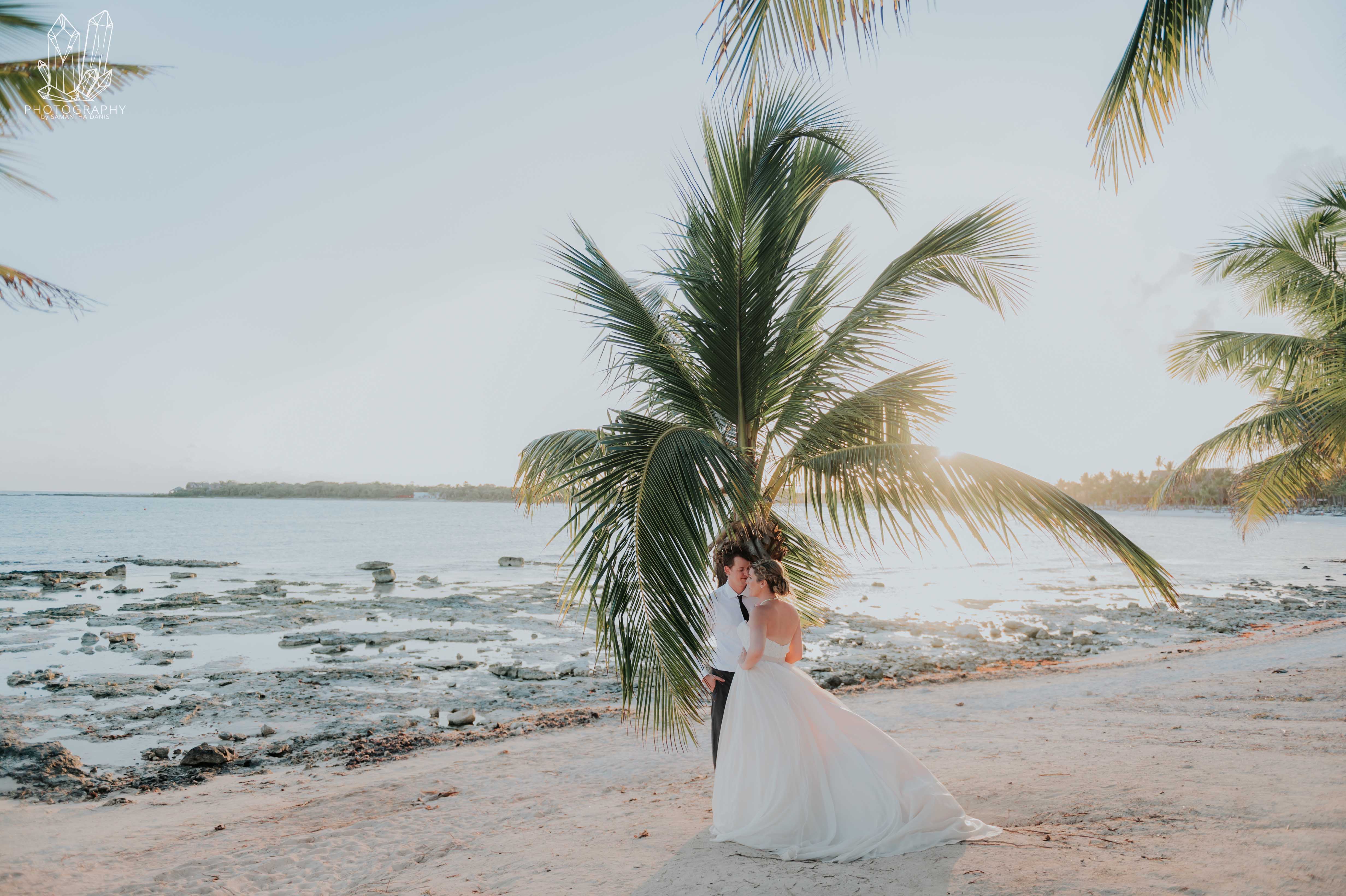 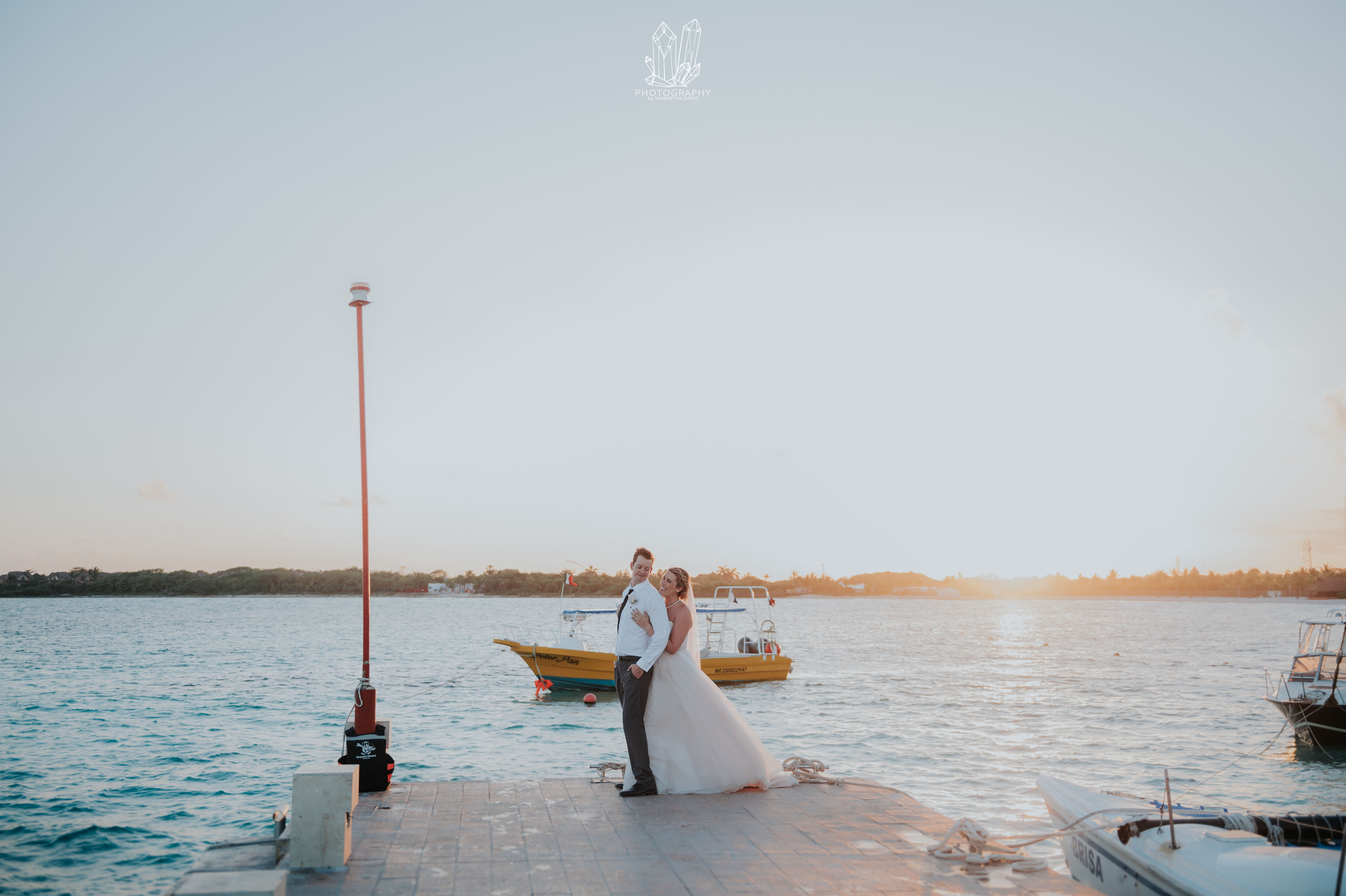 The reception was held on the Maya Caribe side of the resort at the Jaguar hall, not to be confused with the Jaguar Dance bar which a few of the guests, including our bride, made their way over to after the reception ;). The room was decorated with white linens, beautiful floral accent pieces, DIY wine bottle centrepieces, coral name cards holders and an awesome light up dance floor with string-lights and lanterns floating above.  The wedding party all walked in to their own song and boogied their way over to the head table. Alex and Barry then made their grad entrance and waltzed right into their first dance. In that moment they were in their own little bubble and alone in this new adventure in life. The kissing game this time around had three different options; 1- Sing a love song as a table. 2- Tell a story about the bride or groom and 3- Gotta do a little dance. First up was Dancing, and it was the kids. and I gotta say, the boys rocked it! They knew every move to the Whip and Nae Nae and the little-ist one even tried to follow along with the big kids. Not to mention everything was made funnier by the star wars masks they were wearing. With such a hard act to follow, Alex and her dad hit the floor for the father daughter dance. They were quickly joined by Ryan and Barry dancing together and then finally every father daughter in the room were asked to join on the dance floor. It was really quite adorable to watch all the dads and their kids in each others arms. The nights festivities continued with beautiful speeches from both maid of honour, best man and of course parents of the happy couple. There was lots of laughter to be had but even more so happy tears of memories, and wonderful times they’d all shared together. Throughout the night we were graced with a few songs including, Hooked on a feeling and some Backstreet boys, two of my faves so I was totally okay with it! The kids took over the dance floor and they kicked it’s butt! I swear I have never seen kids pull out the moves that they did on that night. I ended my night shooting what I am going to call ”Age of Marriage” dance. They invited all the couples on the dance floor and listed off the years of marriage until only the couple that have been married the longest lasted. And how adorable was it that Alex’s grandparents, Angele and Sabin were the ones remaining. Only for their great grand-daughter, Ryan to go and hand them the brides bouquet. I thought it was seriously the sweetest thing ever. They ended it with an amazing kiss, to show all the young ones how it’s done. Now that’s love right there! The night lasted a few more minutes and I took advantage of it by ripping up the dance floor with everyone. It ended with Time of your life by Green Day, which couldn’t have been a more perfect way to end it. All of us on the dance floor, belting it out like we were at a concert and just smiles all around. 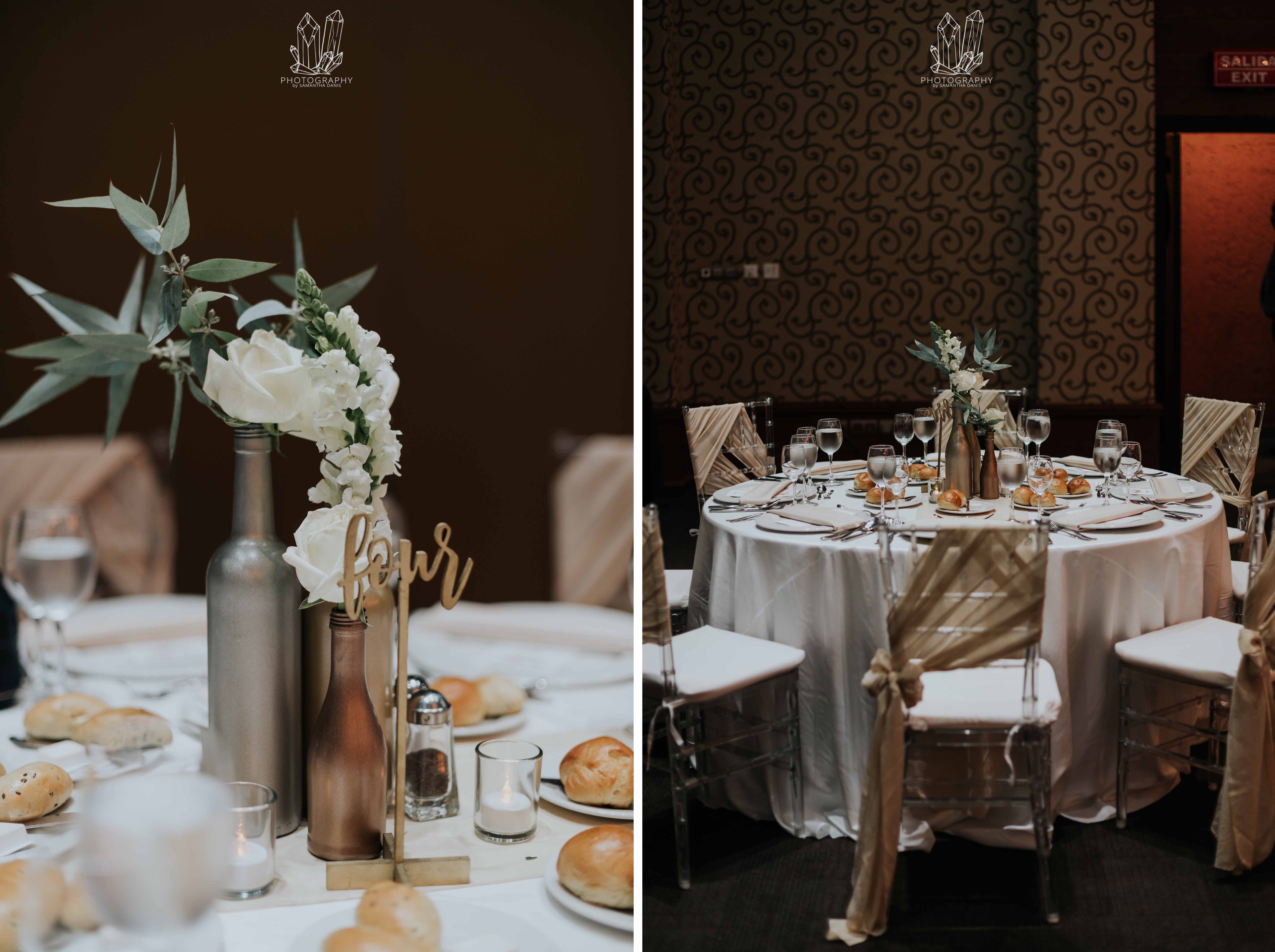 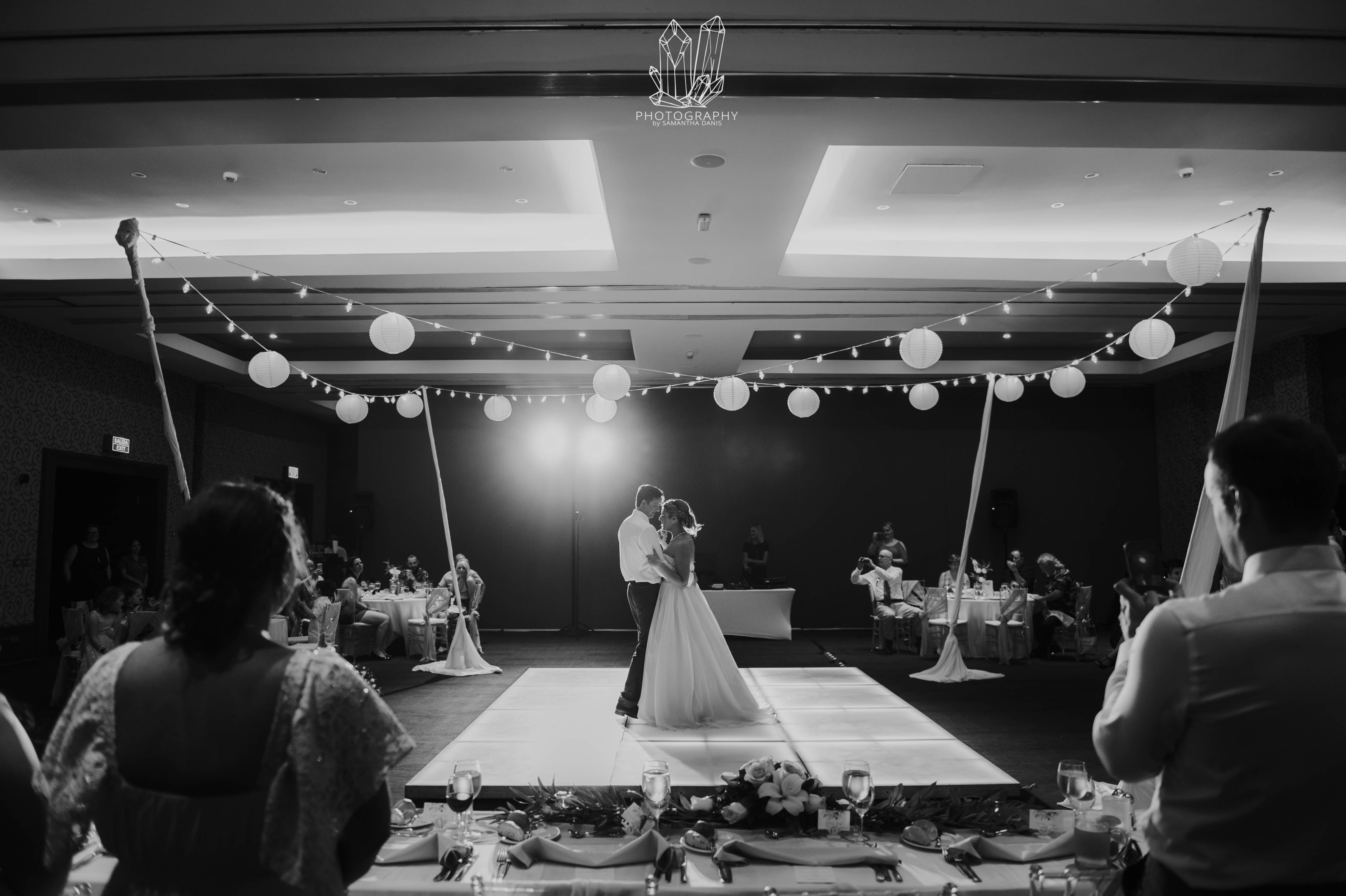 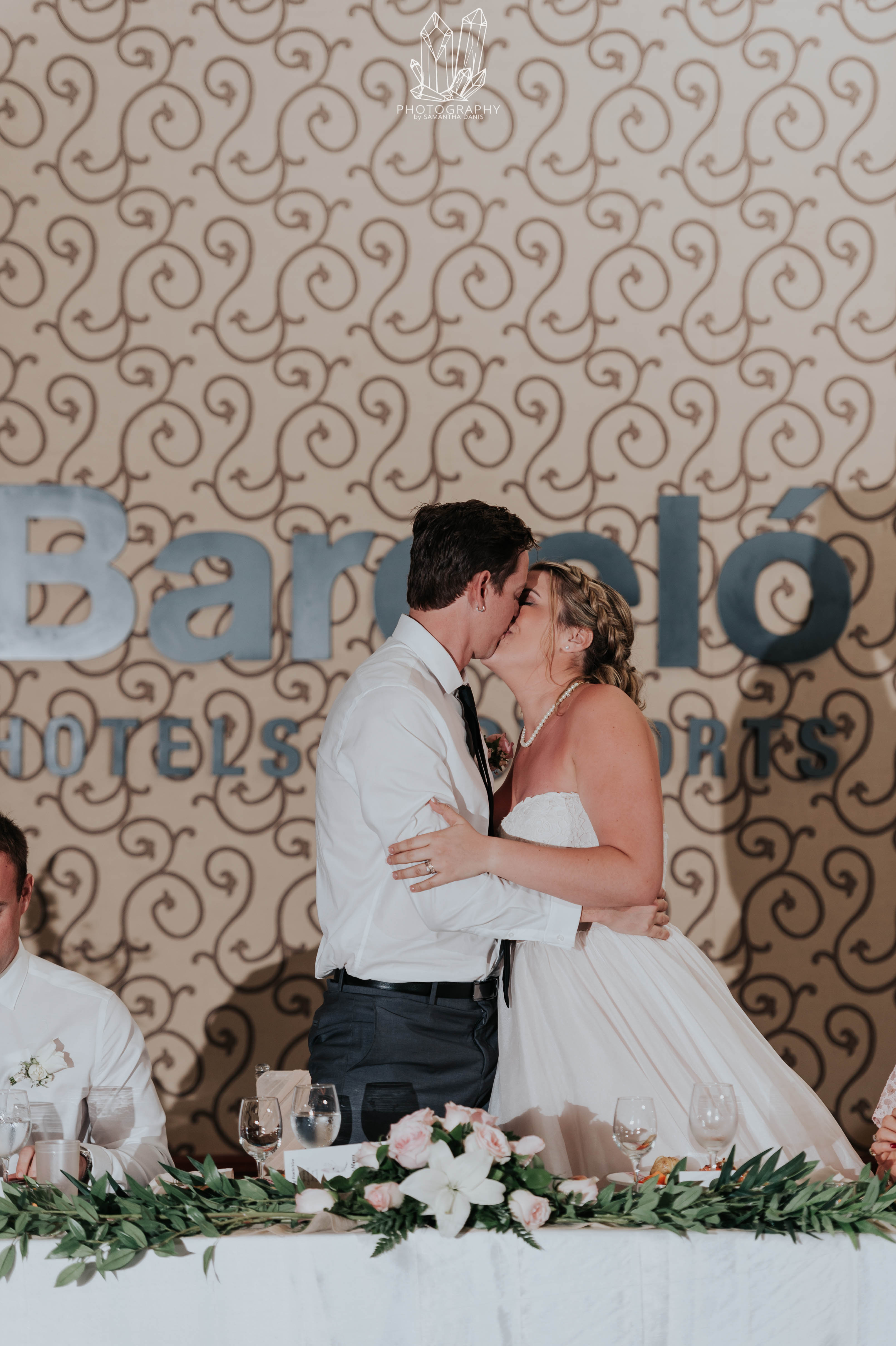 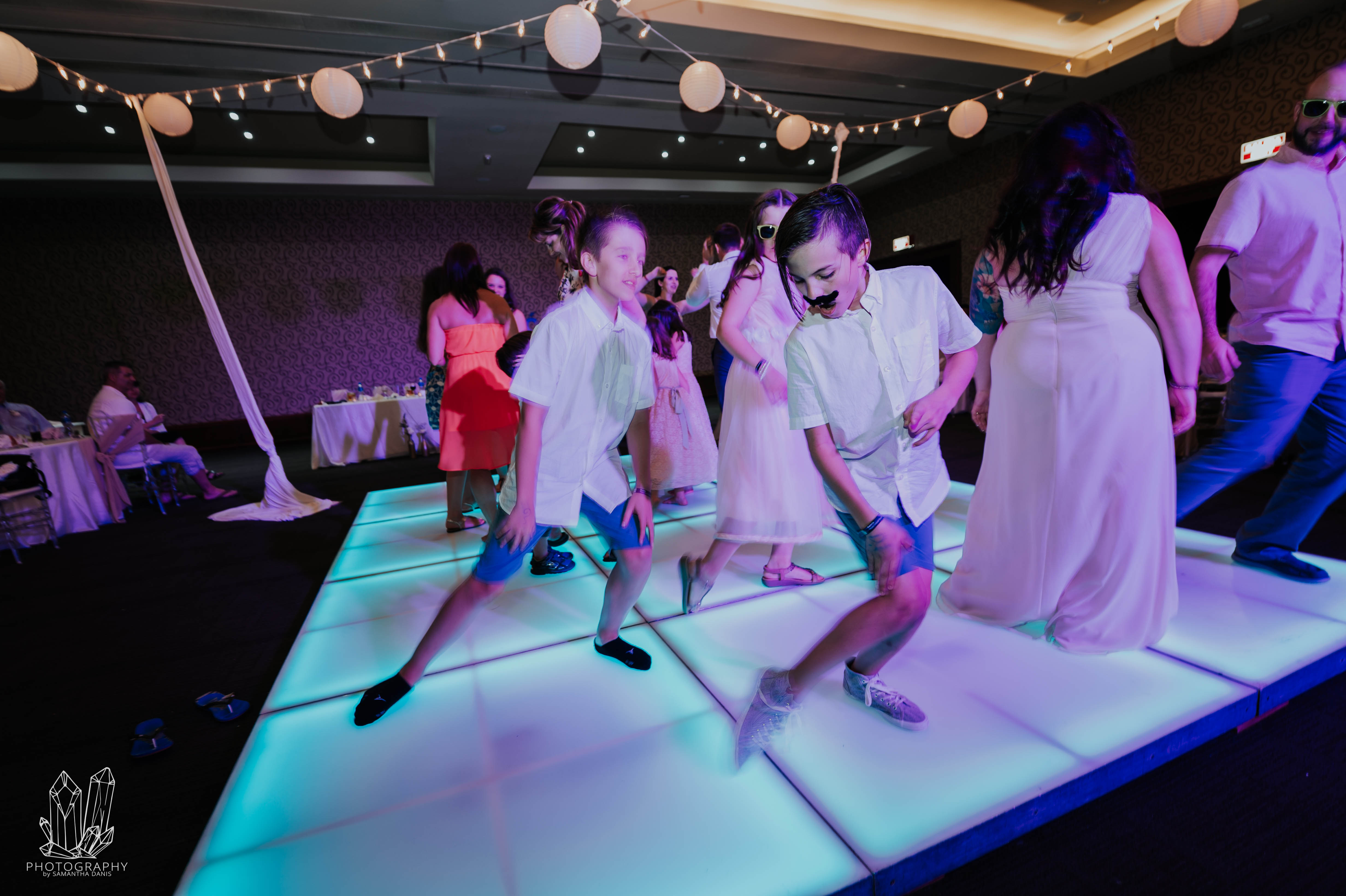 Thank you Alex & Barry for inviting me along with your friends and family on this amazing adventure. I couldn’t be more grateful for the experience you have given me. I’ll cherish your wedding forever and I can only hope that these photos do justice to the time we’ve spent together. xo ♥